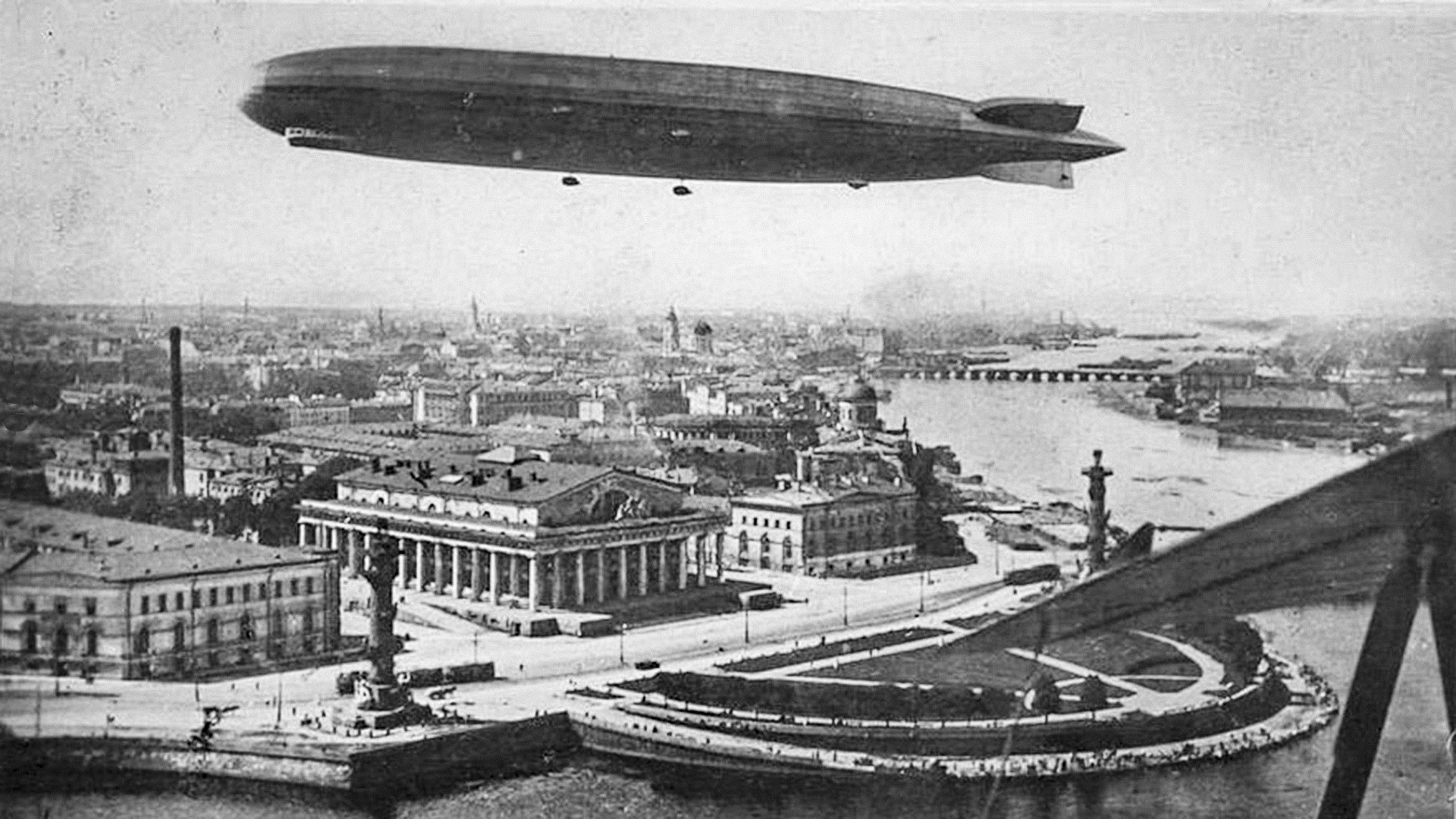 Archive photo
What this year meant for Russian history, what people looked like and what was happening on the cities’ streets.

Year 1931. Stalin's reign was gaining strength. Soviet power was amidst its ‘Five Year Plan’ of a planned economy. Industrialization and construction works were being forced. The country was finally reviving its economy after the chaos of World War I and the Civil War, however, people’s lives were at constant risk, due to harsh state policies. 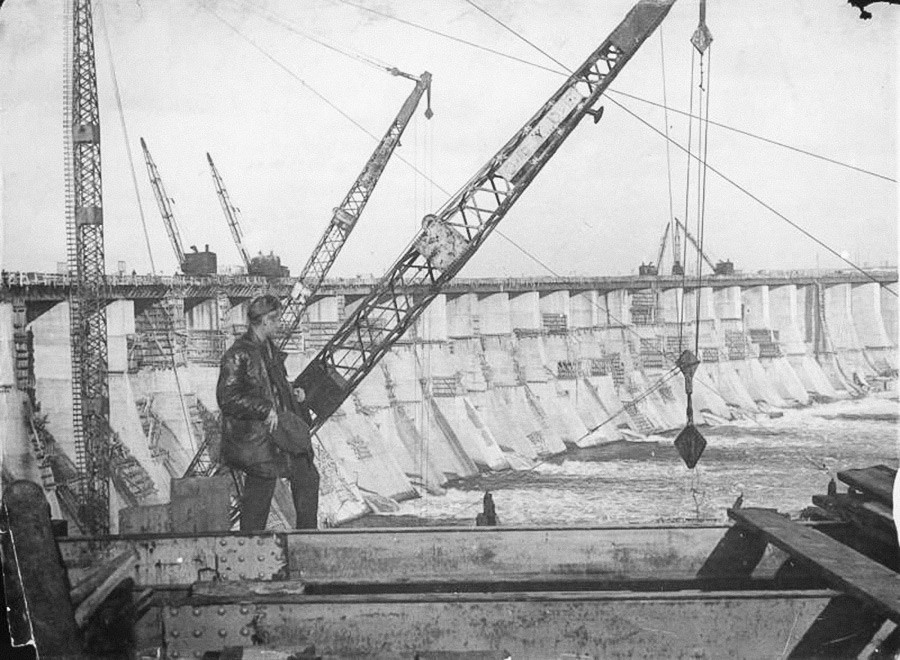 Agriculture was being forced to operate under state control. Peasants were deprived of private property and “surpluses” of grain and cattle were confiscated. People were forced to join the kolkhoz, the Soviet form of collective farm that, by 1931, appeared in most villages of the countries. ‘Kulaks’, the “rich” peasants, and those who used hired labor on their farms, were resettled in Siberia or sent to Gulags. 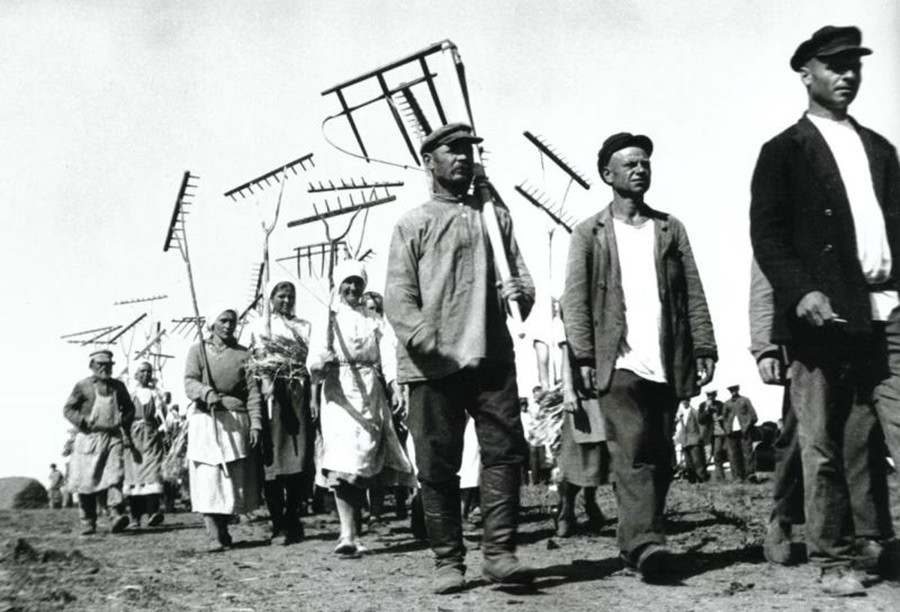 A holiday demonstration was held on the Red Square featuring inflated prop huts devoted to the successes in the collectivization process. 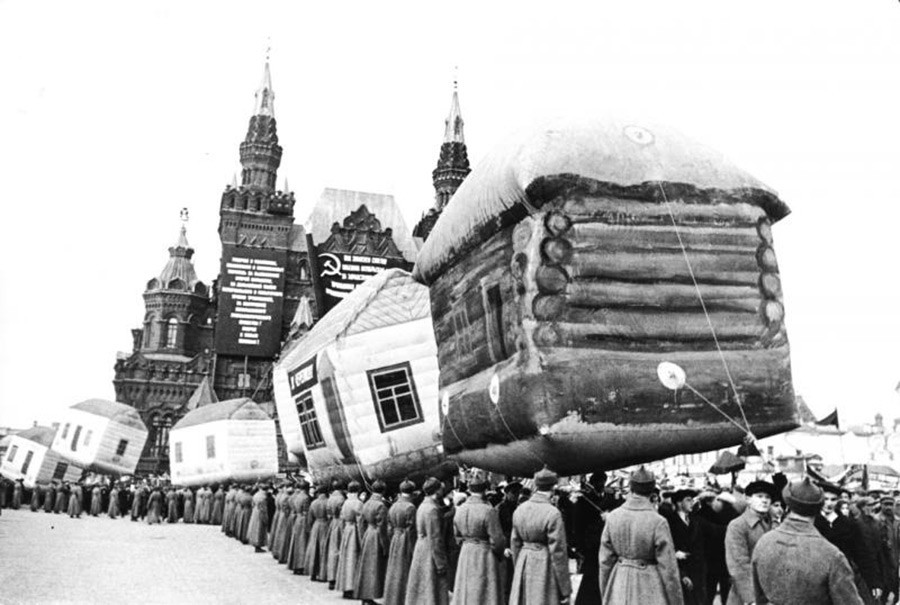 The Soviets continued to fight the Orthodox Church, as well as all other religions. One of the most famous events of 1931 was the demolition of the Christ the Savior Cathedral in Moscow. Plans to build a giant Palace of Soviets in its place, however, did not materialize, with a swimming pool appearing in its place instead in the late 1950s. In the 1990s, however, the cathedral was built anew. 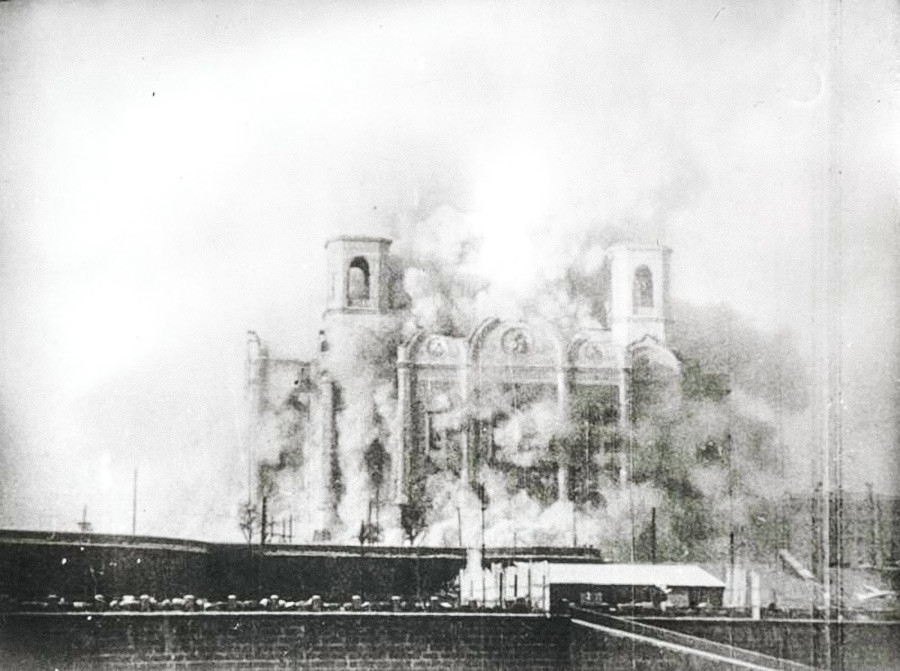 Here’s what the Kremlin and Moskva River Embankment looked like in 1931. Since, after the Revolution, the capital was moved from St. Petersburg to Moscow, the Bolshevik authorities began residing with their families in the Kremlin. Stalin had plans to rebuild and reconstruct the city center and make wider streets and prospects. He would fulfill the plan later in the decade. 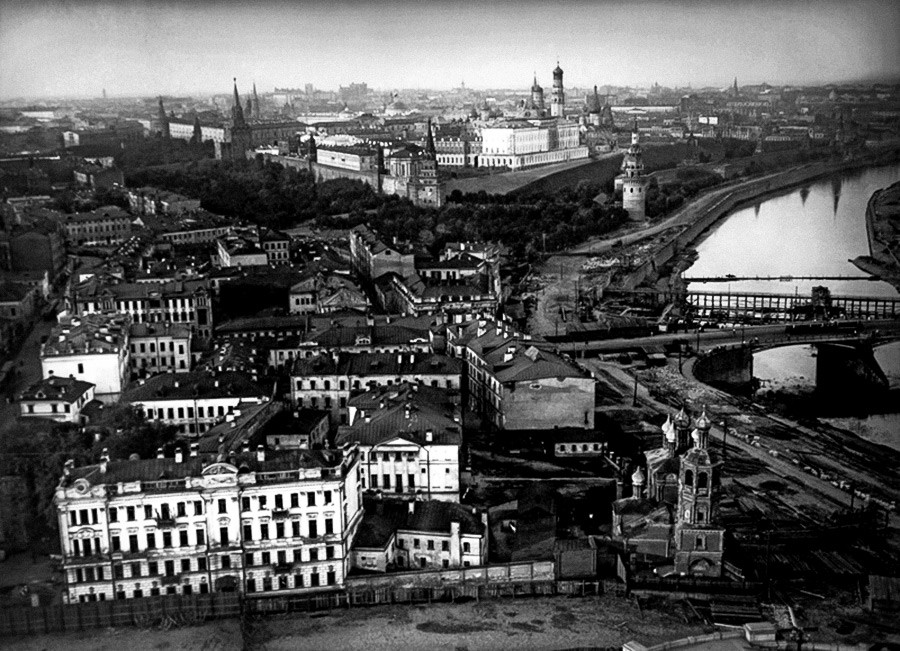 Moscow’s Manezhnaya Square in the very city center is pedestrian these days, but this is how it looked in 1931. 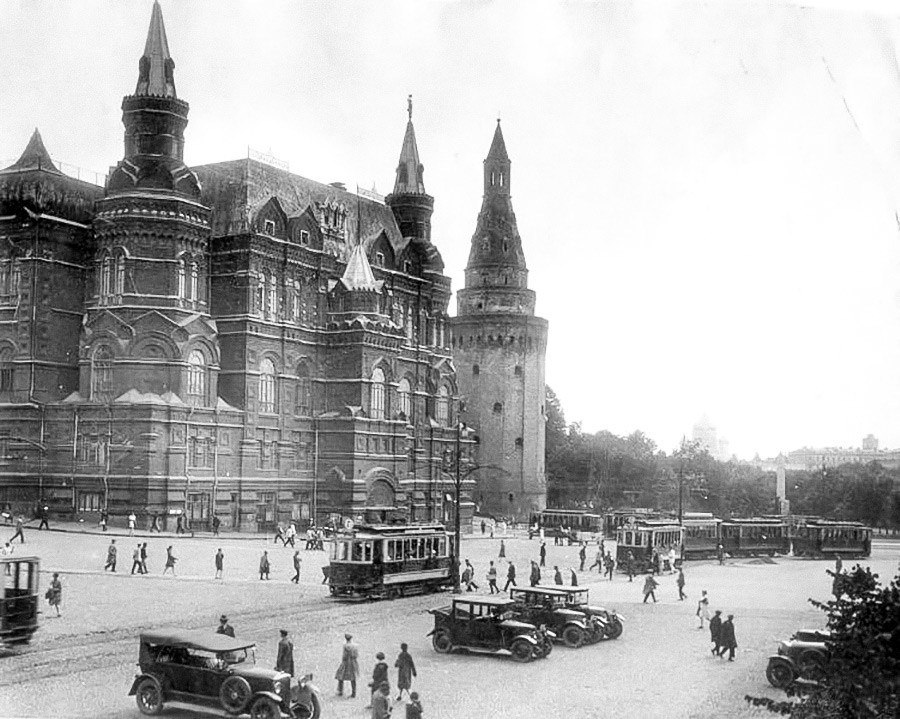 The Soviet capital tended to be a progressive city with many cars and trams and was visited by foreign tourists, who would see the glory of the Communist land. However, there were still many horse carriages being used in the city. 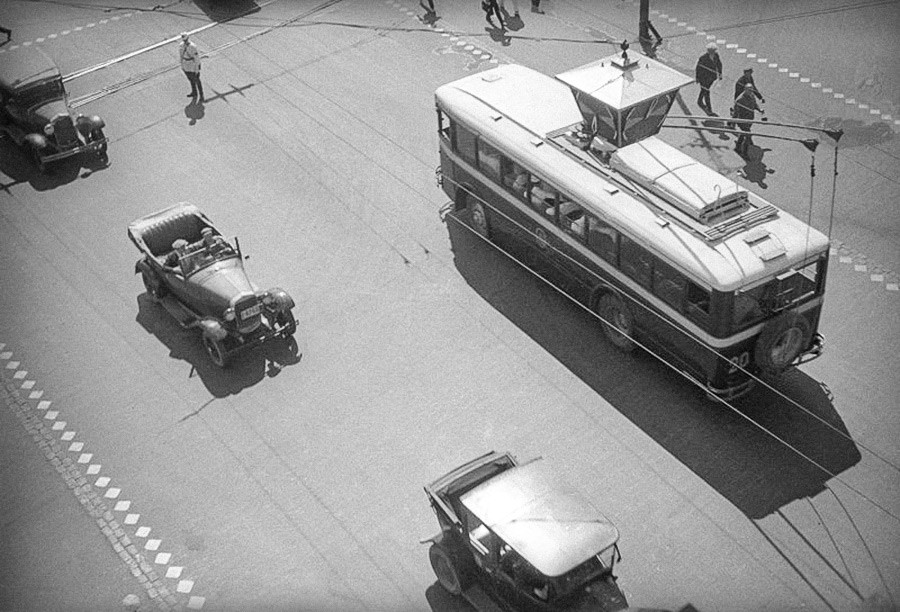 One of the honorary foreign guests that year was Bernard Shaw. He had a meeting with Joseph Stalin and said he liked him a lot. The writer also met a delegation of Soviet authors and creative people and was apparently “inspired” by Soviet Russia. You can read more about his visit here. 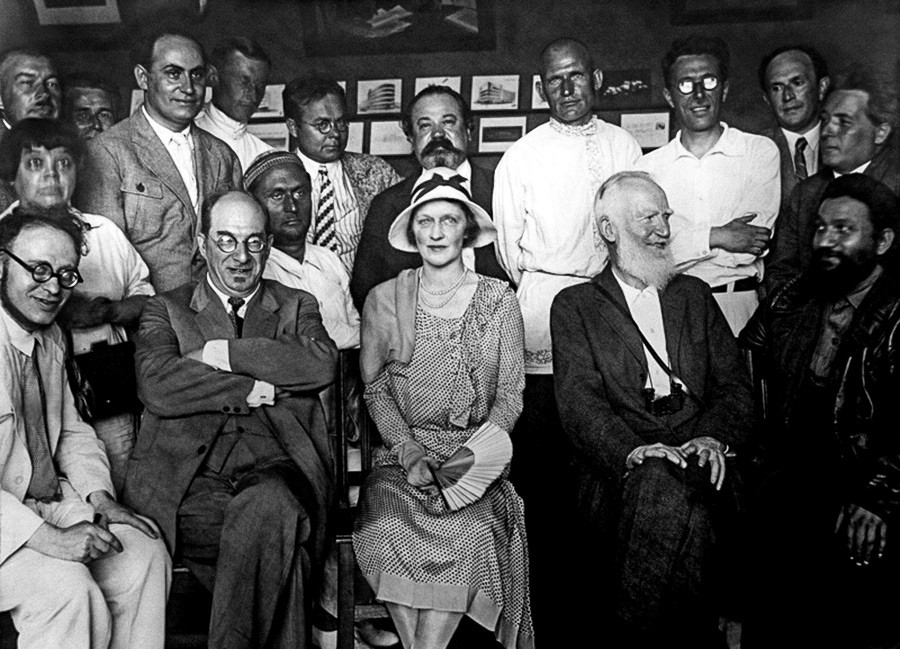 Soviet cinema was developing fast and, in 1931, the first ever Soviet movie with sound was filmed in the USSR titled ‘Road to Life’. Pictured are the avant-garde advertising posters for Soviet cinema. One of the banners was put right on the monastery bell tower in Moscow. Later, the monastery was demolished. 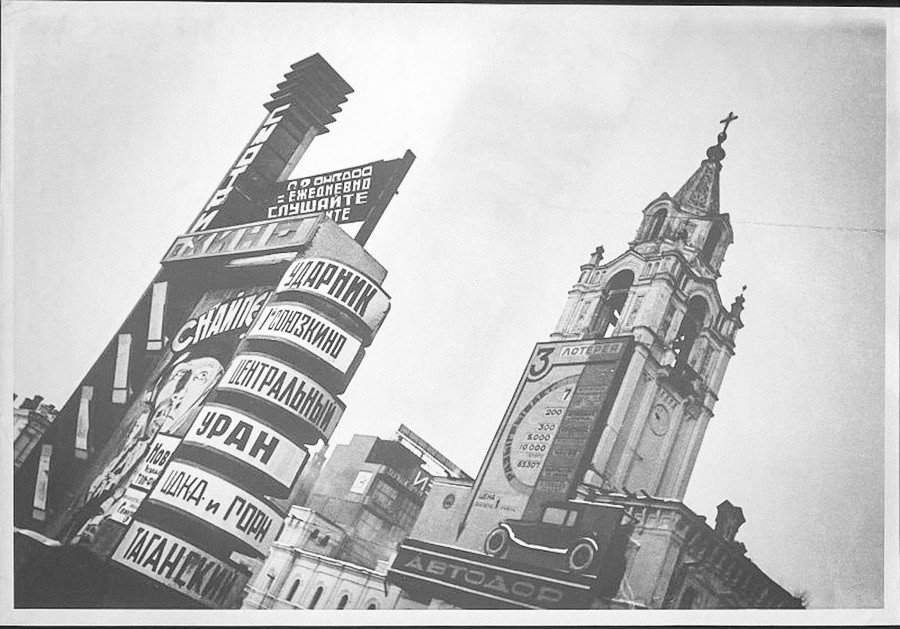 The architectural monument Sukharev Tower was still standing. However, in 1934, it was demolished under Stalin’s Moscow reconstruction plan, as the Soviets were of the opinion that it “interrupted the movement”. 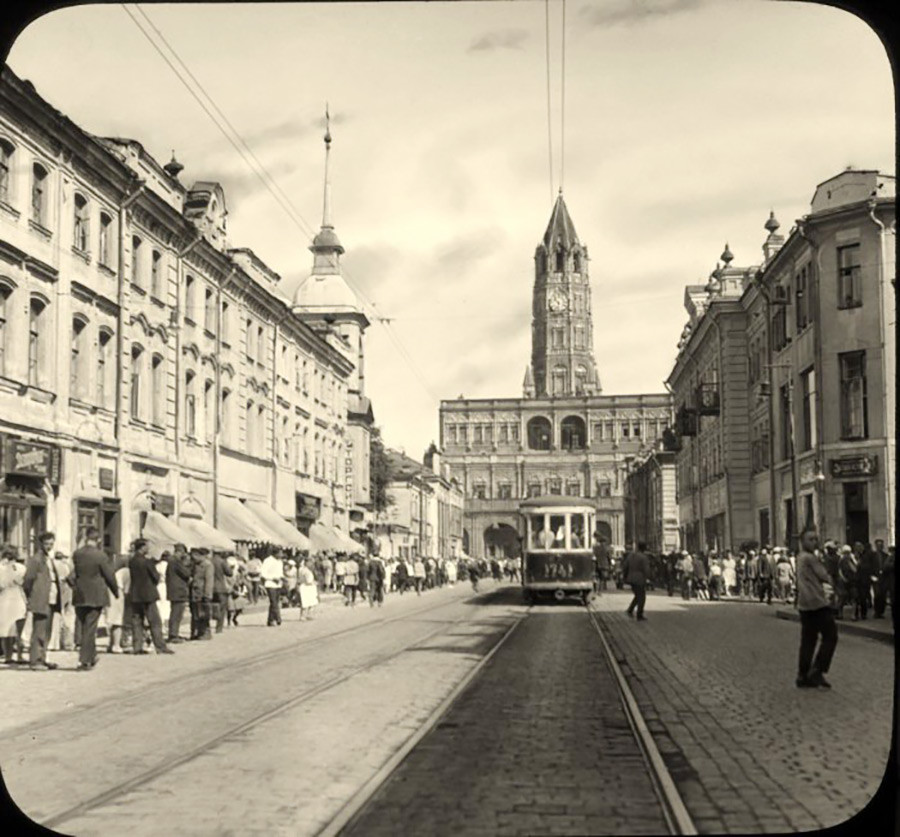 Entire new districts were built for workers and thousands of people were able to get their own apartment - quite a luxury for people who were used to living in dorms and communal apartments. 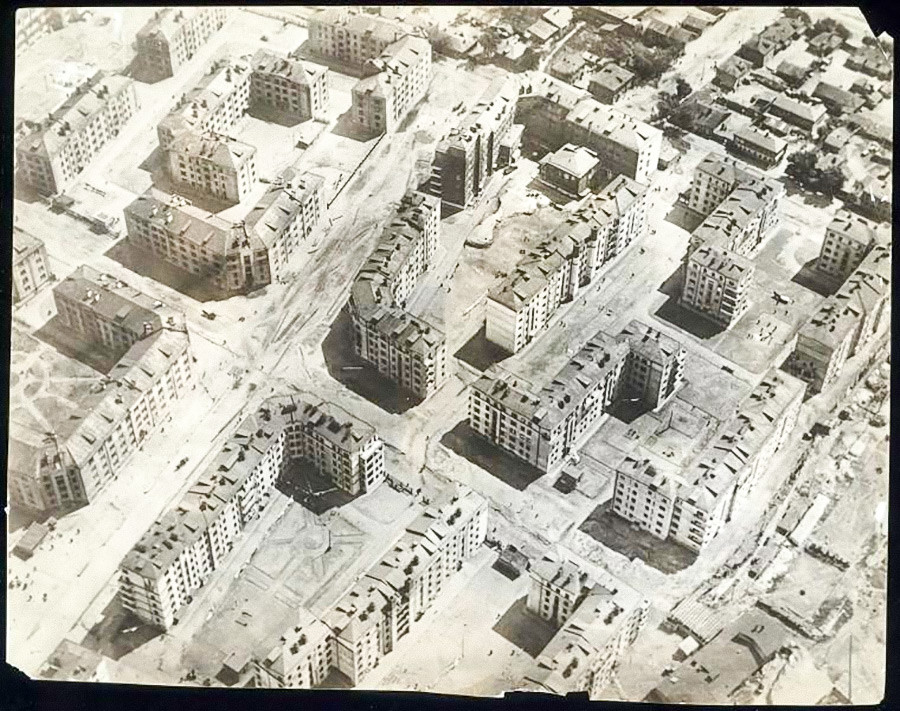 A German Graf Zeppelin airship is flying above Leningrad. It was announced as a research aircraft with scientists to explore the Arctic and make aerial photos. The Soviets allowed the aircraft to fly above Leningrad and asked to share photos and results of research in return. However, the photos mysteriously disappeared, which made the Soviets believe that Zeppelin’s goals were, in fact, covert reconnaissance. 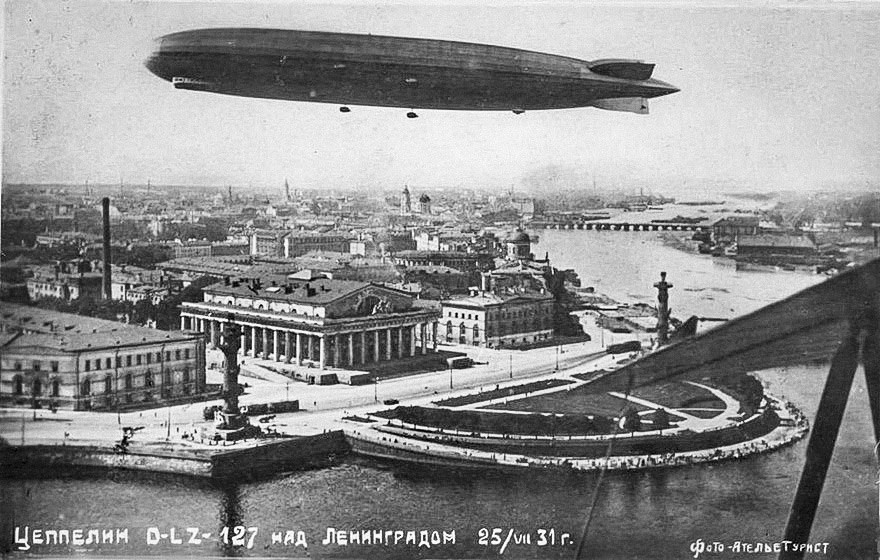 This iconic photo was taken by legendary Soviet photographer Boris Ignatovich and it features people strolling towards the Winter Palace and the Palace Square and the giant foot of one of Atlases who stand on the Hermitage porch. 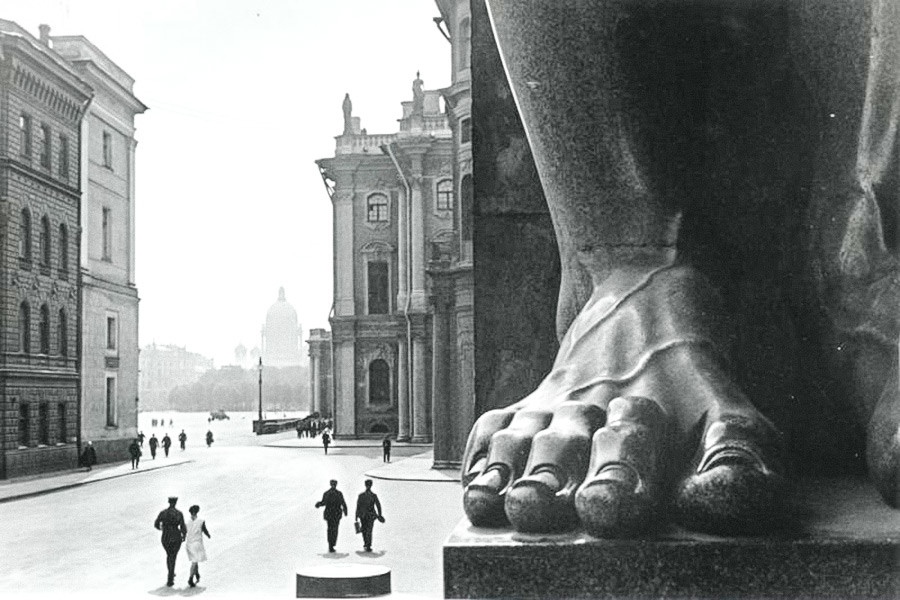 Year 1931 was the fourth year of Stalin’s planned economy ‘Five Year Plan’. Industrial progress should have been incredible, so proletarians were forced to work harder and show record-breaking figures. In some four years, Soviet propaganda created the Stakhanovite movement of top-performing workers. 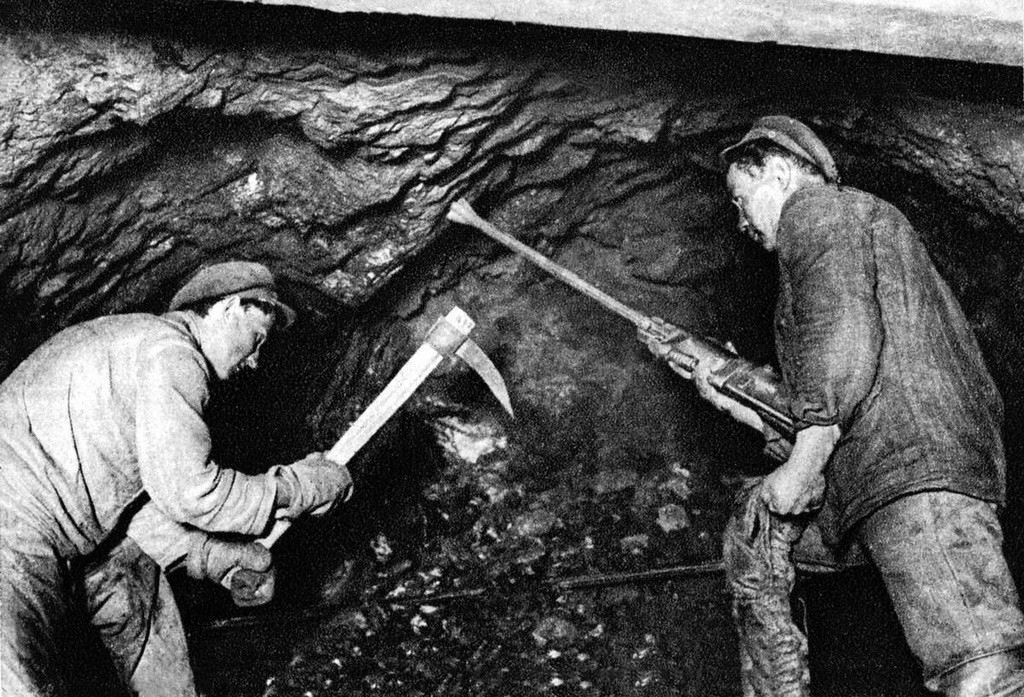 Best Soviet photographers were sent across the country to take aesthetically pleased photos of strong and young workers, as well as of the big impressive plants and factories. The man pictured below is operating a machine on a paper mill. 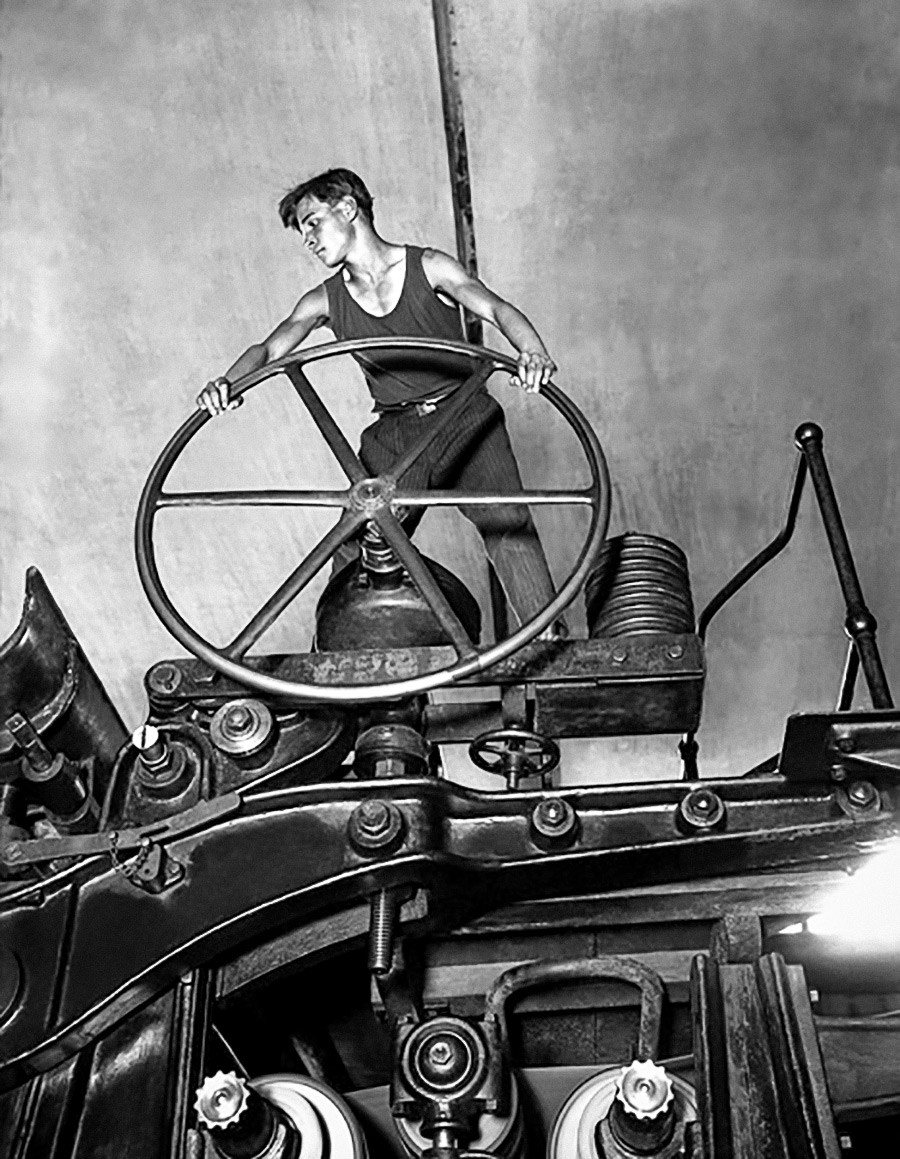 The faces of those workers were usually very happy and smiling - this is how propaganda tried to show the perfect new type of Soviet man. 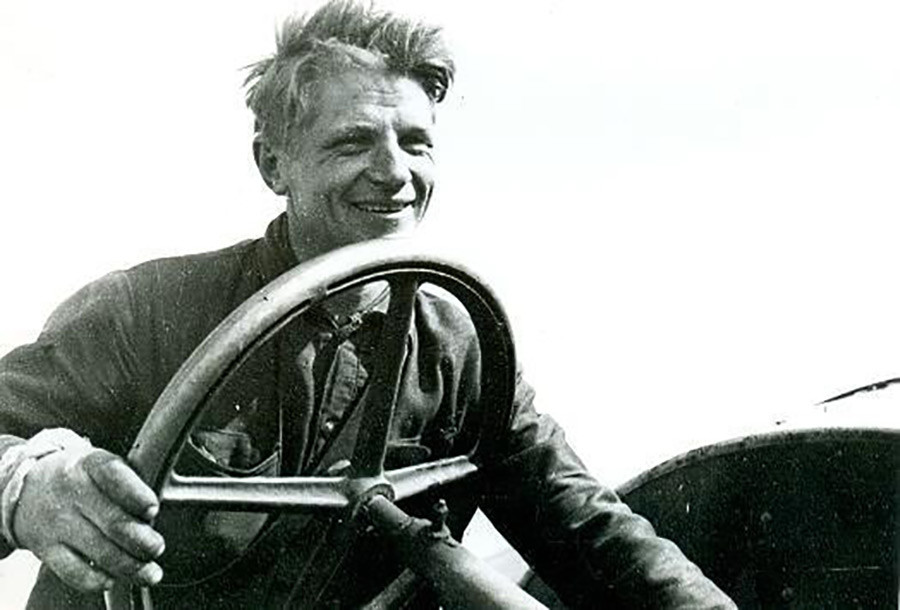 In the 1930s, there was a massive push for female labor. Women had to work equally with men in many industries. The female brigade busy with timber rafting pictured below consists of the top-performing “shock workers”. It was a matter of honor that the whole brigade showed good results and, moreover, those groups often received state awards. 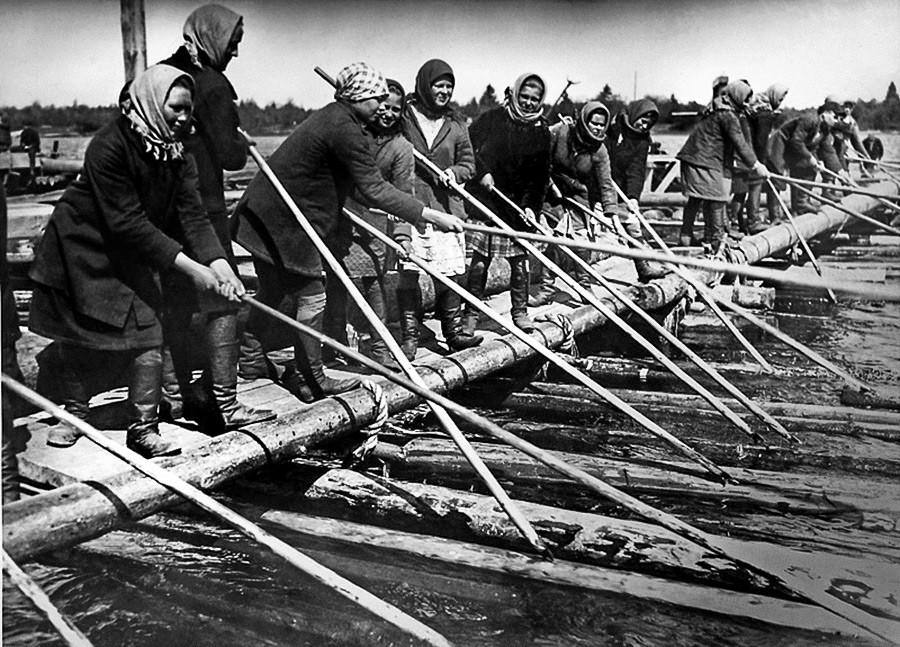 In 1931, Soviet authorities integrated a ration cards system within the whole USSR. Bread and all essential goods began to be distributed among workers of the state factories and their families. Below is what “good” workers who followed the plan, or exceeded it, could get with a normal ration card in a closed distribution center at a factory. 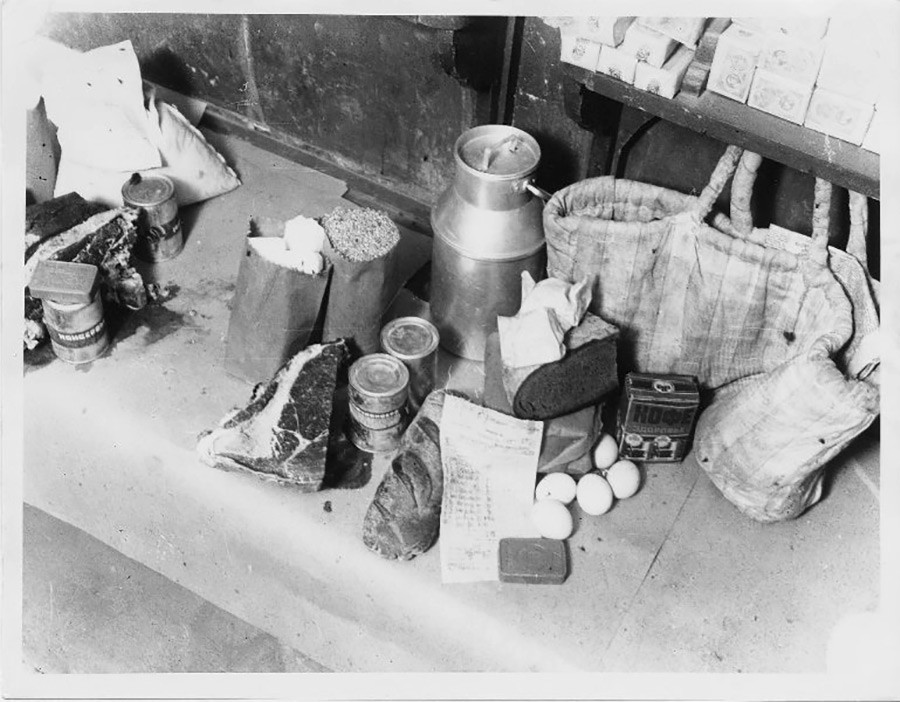 In 1931, the first fast train branded Red Arrow was launched between Moscow and Leningrad. The train made the route in a record time - 9 hours 45 minutes. Before that, trains plodded for more than 12 hours. 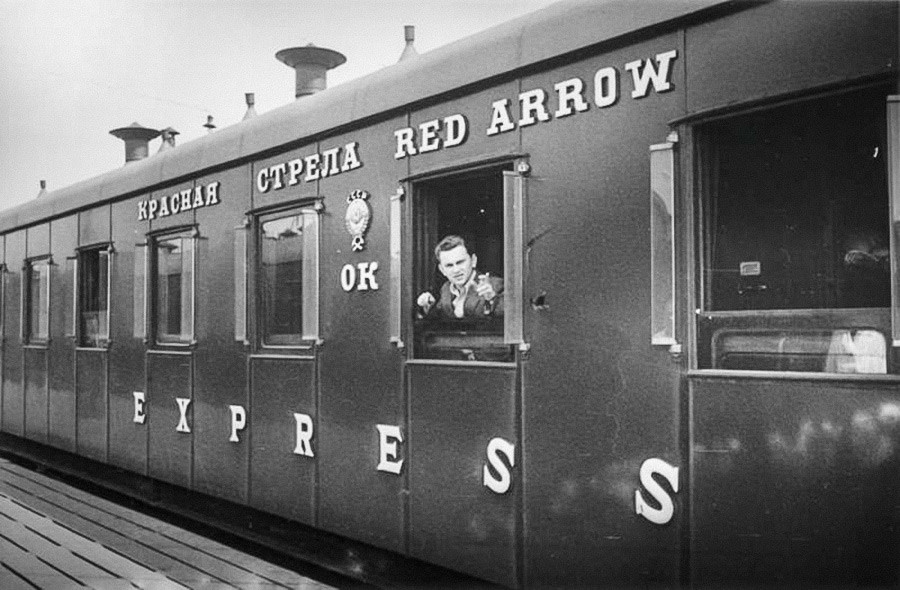 The route still operates daily and was only interrupted between 1941 and 1943, during the Nazis Siege of Leningrad. 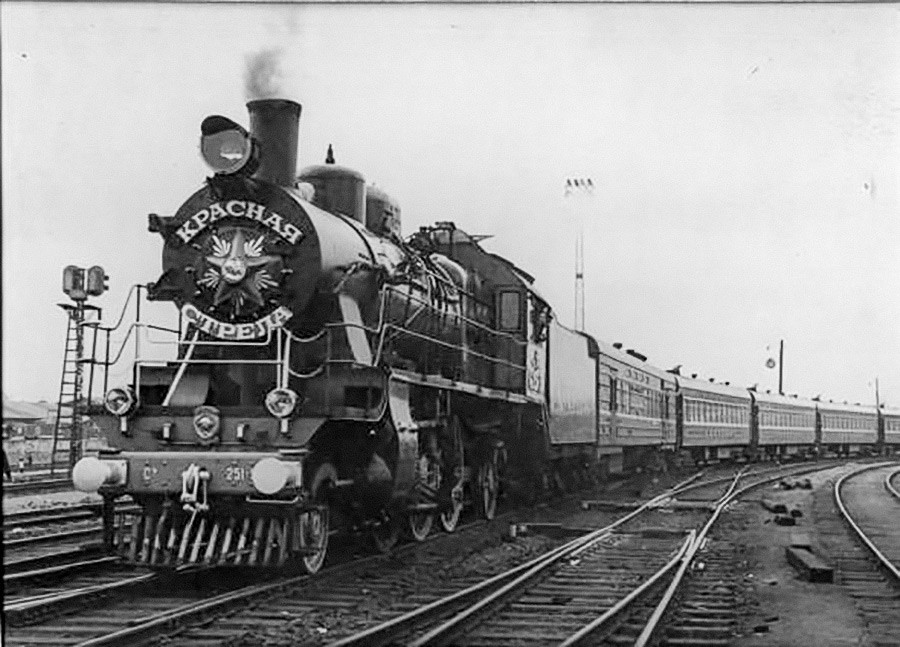 Pictured with Joseph Stalin, Maxim Gorky was the main proletarian author and the most famous Soviet writer of the time. Stalin appreciated his ideologically correct novels much and asked him to return to the USSR after emigrating to Italy. 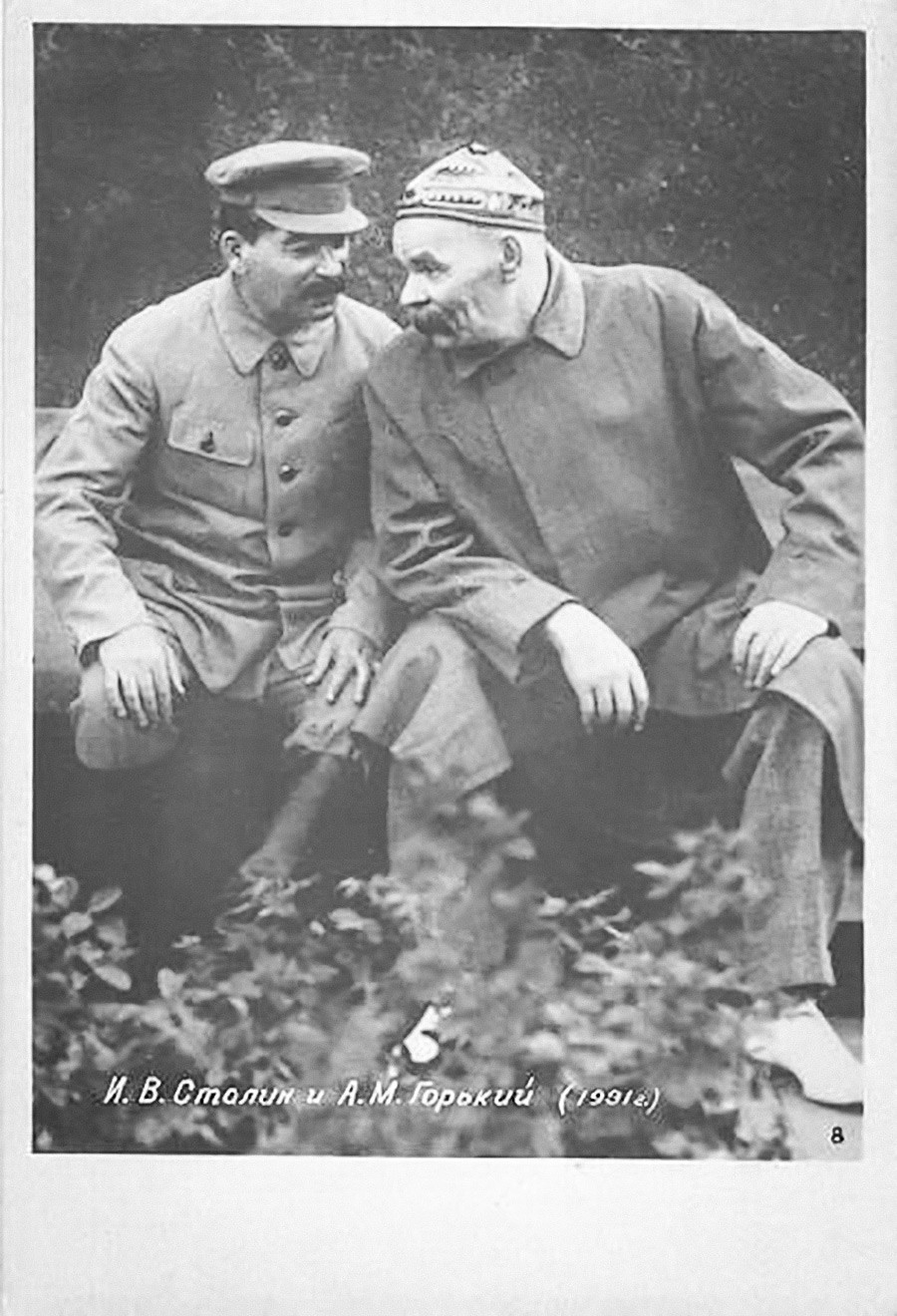 From the first years Soviet power, developing sports and physical culture among masses was on the agenda. And, in 1931, authorities launched physical norms for people, in order to make sure they were “ready for labor and defence of the USSR”. People trained a lot and often took part in sports parades on the Red Square. 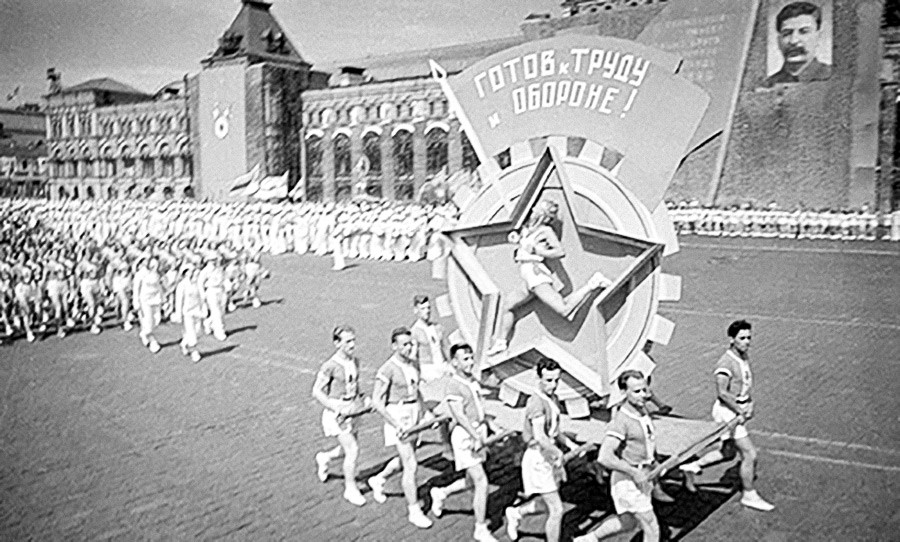 Amid all the successes of the Soviet industry, the early 1930s also saw the establishment of the Gulag penal system. The first labor camp was set up on the Solovki Archipelago in the White Sea and, in 1931, its prisoners were sent to construct one of the most ambitious Soviet projects - the White Sea–Baltic Canal. It was built in record time at the cost of tens of thousands of lives. 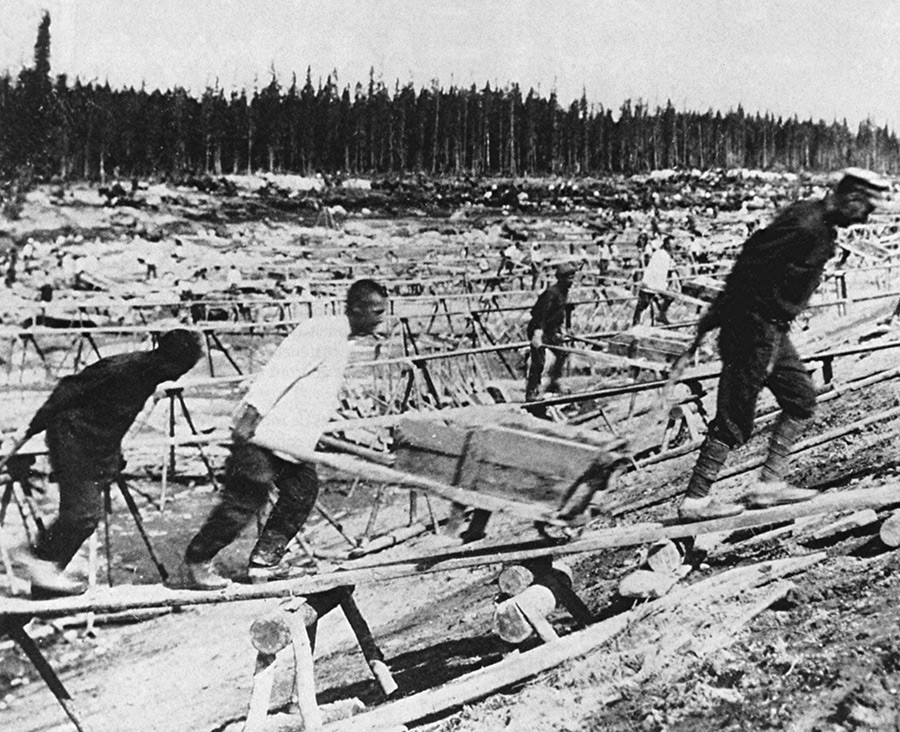 Soviet authorities had built their new country - and one of the most popular styles of the early 1930s was constructivism, which saw architectural masterpieces pop up across the whole country - just like this mechanized food service enterprise - a Factory-kitchen - in Moscow. 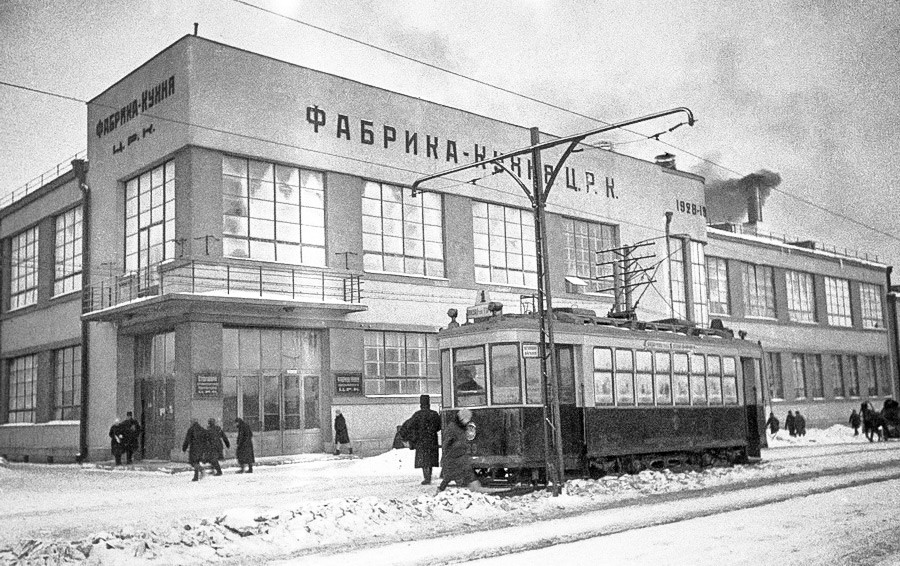 Meanwhile, the “new” Soviet people began to be against all gender and sexual stereotypes - and also shed their inhibitions of the past. 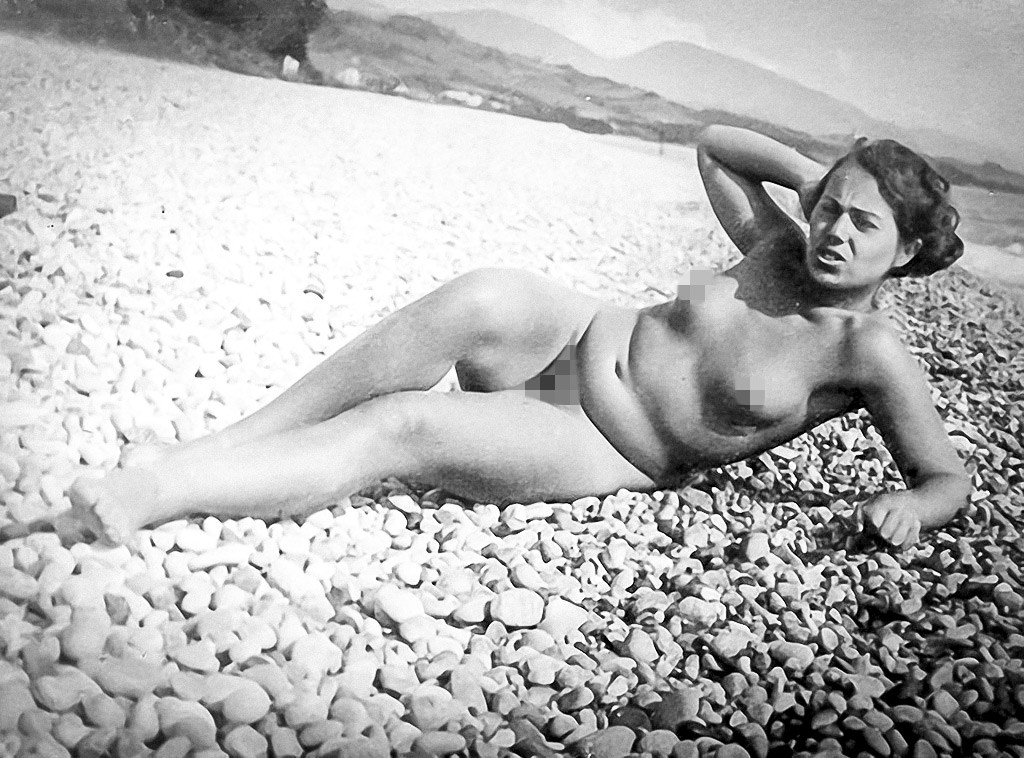