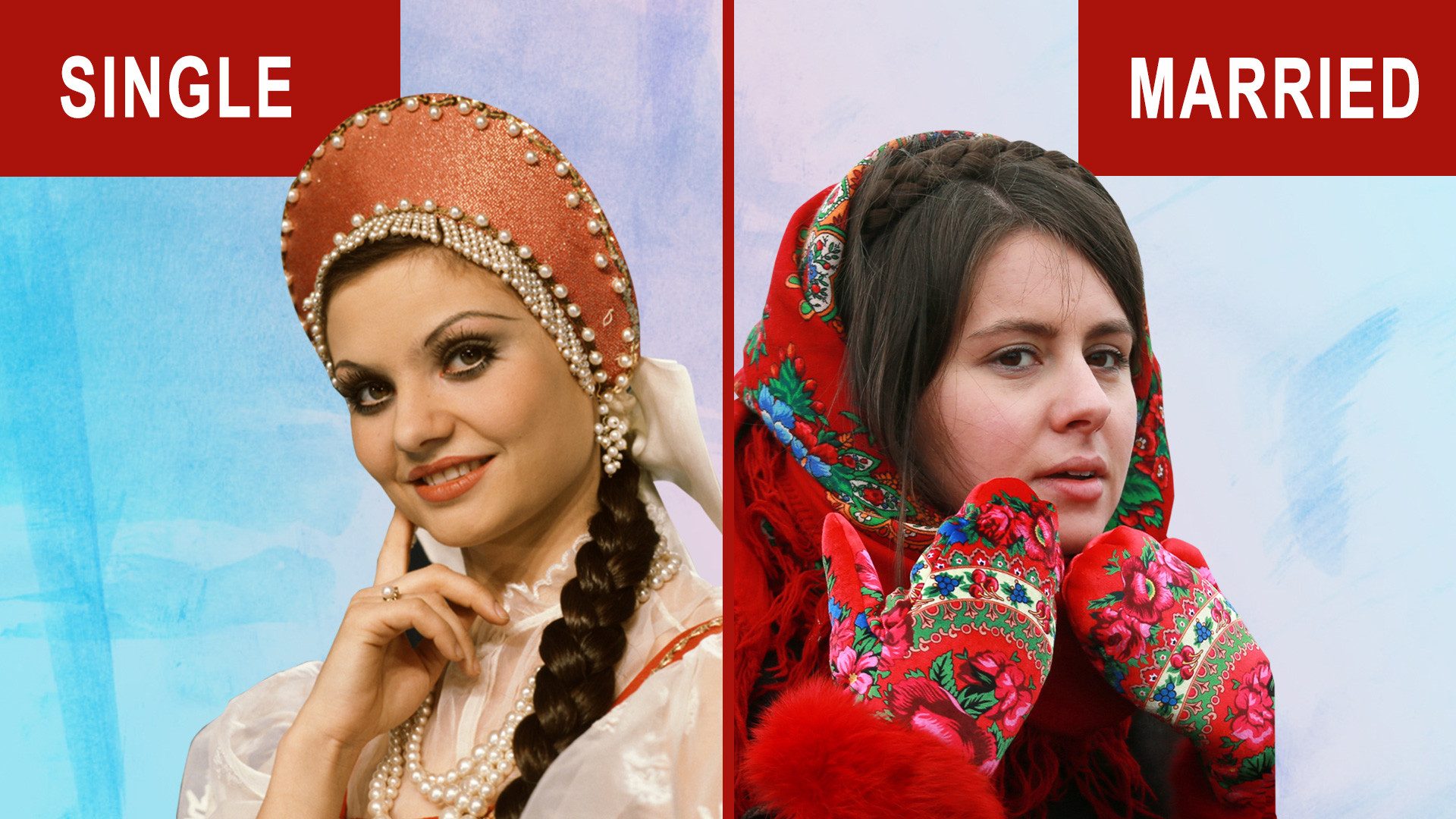 Nikolai Malyshev; Vladimir Smirnov/TASS
How could you tell if a woman had a fiancé or was still available? Just go by her hairstyle.

As recently as a century ago, it would be practically impossible to see a Russian woman with short hair. You also wouldn’t be likely to see a woman outside with loosely worn hair—today this would be comparable to turning up to the office in a nightgown. Instead, women of all ages wore their hair long and braided.

A long braid—ostensibly one of the simplest of hairstyles—was a sacrosanct feature for women in ancient Russia. First of all, it was a way to tell whether a woman was single or in a relationship. An unmarried woman would wear a single braid until a fiancé came into the picture, and then she would twine a bright ribbon into her braid. 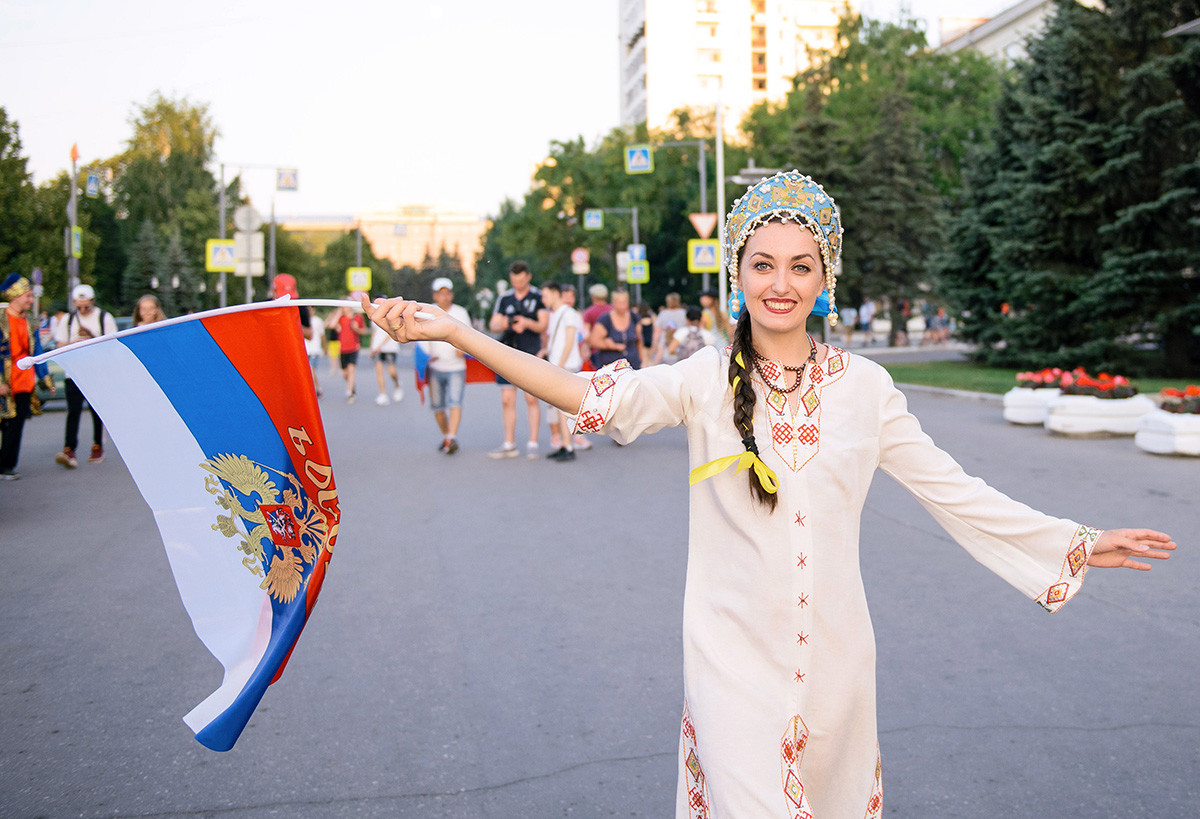 Two ribbons signified that the girl's parents had already given their approval to the marriage.

Meanwhile, only married women could wear two braids. There was an ancient Russian custom of unbraiding the hair on the eve of a wedding, symbolizing a girl's parting with the maidenly life. In some regions, the brother of the bride-to-be took part in the ceremony. In others, the groom himself took part, while in some it was the girlfriends of the bride. 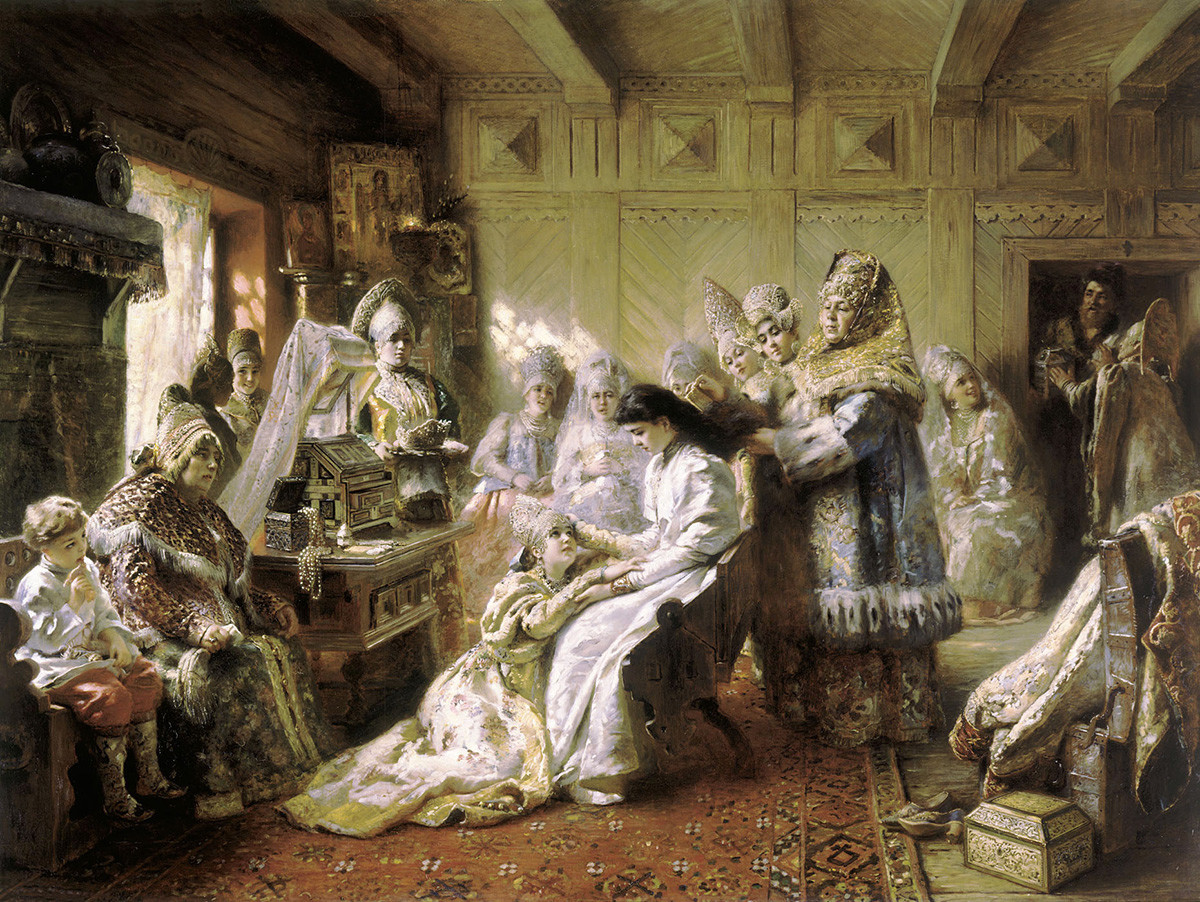 A married woman was also obliged to always keep her head covered, so the two braids would be incorporated into an intricate hairstyle that fit under a headdress. No one outside her family was allowed to see her hair. If a woman did not marry (which did, of course, happen sometimes), she would wear a single braid into old age.

A woman's braid was like a beard for a man

Just like a beard on a man, a woman's braid was seen as a symbol of honor. Tugging the braid was regarded as a grave insult. In ancient Russia, a peasant woman's braid could be forcibly cut off as punishment for serious misdemeanors such as fornication. Such punishments were imposed by a peasant court.

At the same time, a girl could cut off her own braid as a sign of mourning if her husband died. It was a way of telling the outside world that she did not want to marry. Some regions had a custom of making a girl's braid into a gift that she would present to her future husband as if placing her life in his hands. If enemies attacked the village, the husband could even take his wife's braid into battle as a talisman.

Strength was all in a person's hair

The Slavs had quite a lot of superstitions relating to hair. The main thing is that they believed hair was the repository of a person's life force and as such had to be treated with reverence.

Young children's hair was not cut until they reached a certain age (in some places three years, and in others as late as five) and an effort was made to avoid combing it. The ceremony of the first haircut was one of the main events in the life of a young Slav. 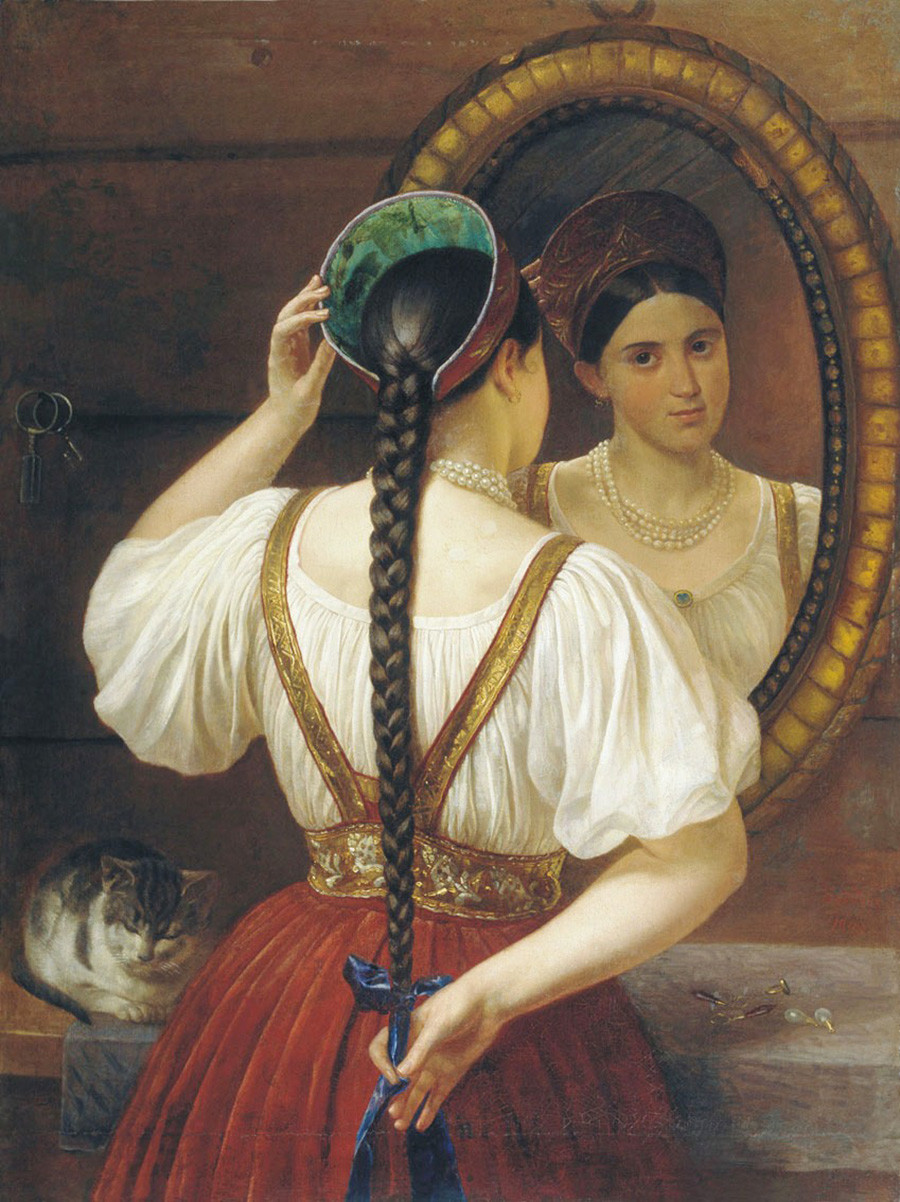 Girls learned to look after their hair from a young age and only allowed those closest to them to comb and braid their hair. The thicker her braid (best of all was waist length and as thick as her arm), the more marriable a girl was considered to be. Girls painstakingly combed their hair in the evening to symbolically restore the energy they had lost during the day. While braiding hair, talismanic phrases about love or warding off the evil eye could be invoked.

Whereas a single braid imparted its life force to just one girl, two braids symbolized the lives of both their owner and of her future children. An old superstition surviving from the ancient past was that pregnant women should not have their hair cut. But this does not mean that in ancient Russia people did not cut their hair at all.

In order to encourage their hair to grow faster and thicker, girls had their hair ends trimmed starting at the age of 16. However, this could only be done during a waxing moon, and the hair that was cut off couldn't just be thrown away because that would have exposed its owner to the risk of having a spell cast against them. So it was burnt instead. In fact, even now some Russian women consult the lunar calendar before picking a day for a haircut. 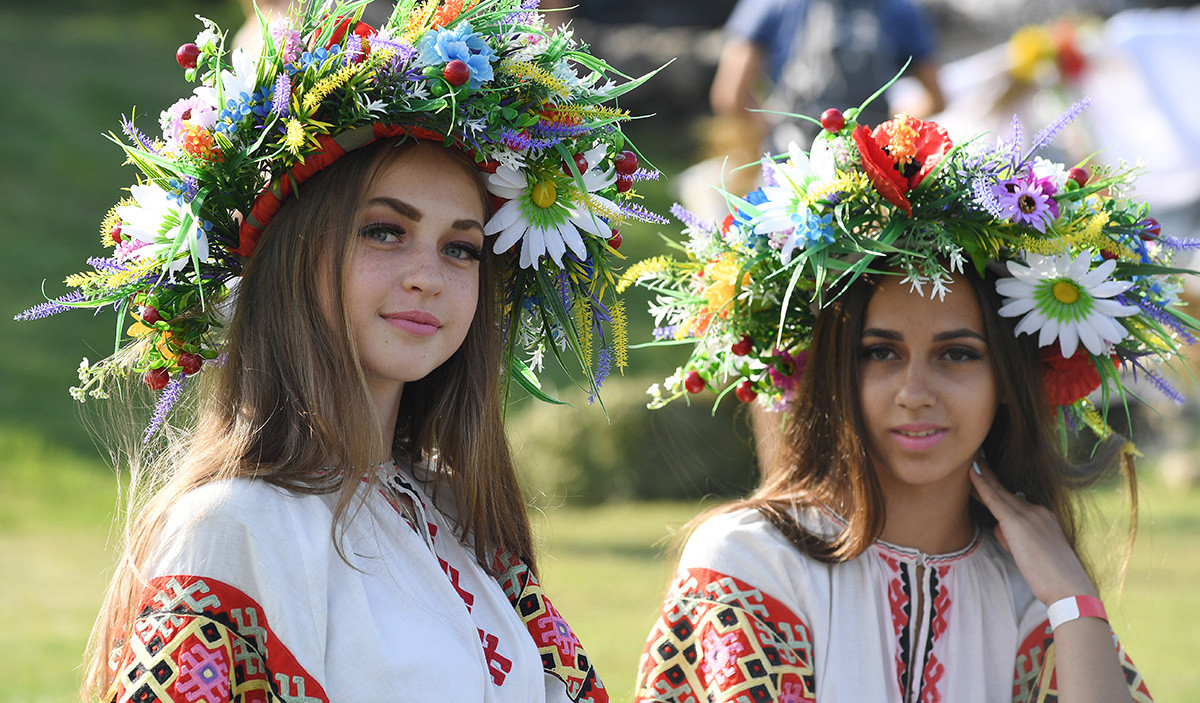 Girls during the celebration of Ivan Kupala holiday.

It was not just seen as unseemly for a woman to wear their hair loose, but dangerous too since there was a belief that this could expose her to the negative influence of evil forces. There was an exception though. During the pagan festival of Ivan Kupala girls were allowed to let their hair down, but this was done precisely with the goal of facilitating contact with the world of the spirits.

The Slavs also depicted various witches, from mermaids to Baba Yaga, as having loose hair. 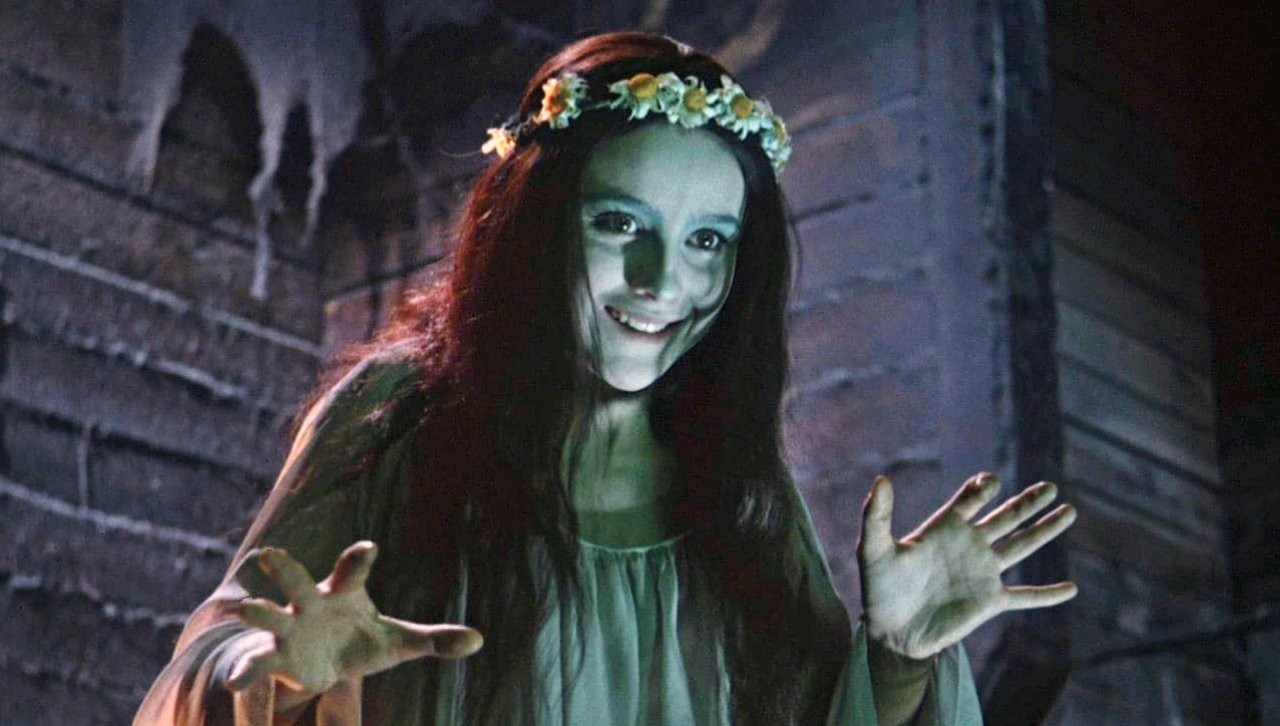 A frame from Viy movie.