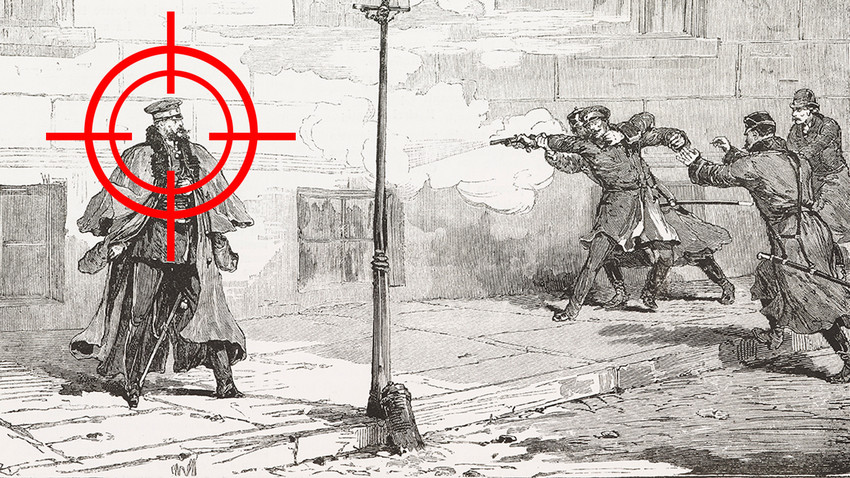 Getty Images
Before Emperor Alexander II of Russia was killed on March 1, 1881, five attempts on his life were made: his home and train were blown up, he was shot at, and even chased down the street by a fierce militant...

1st attempt: A shot turned away 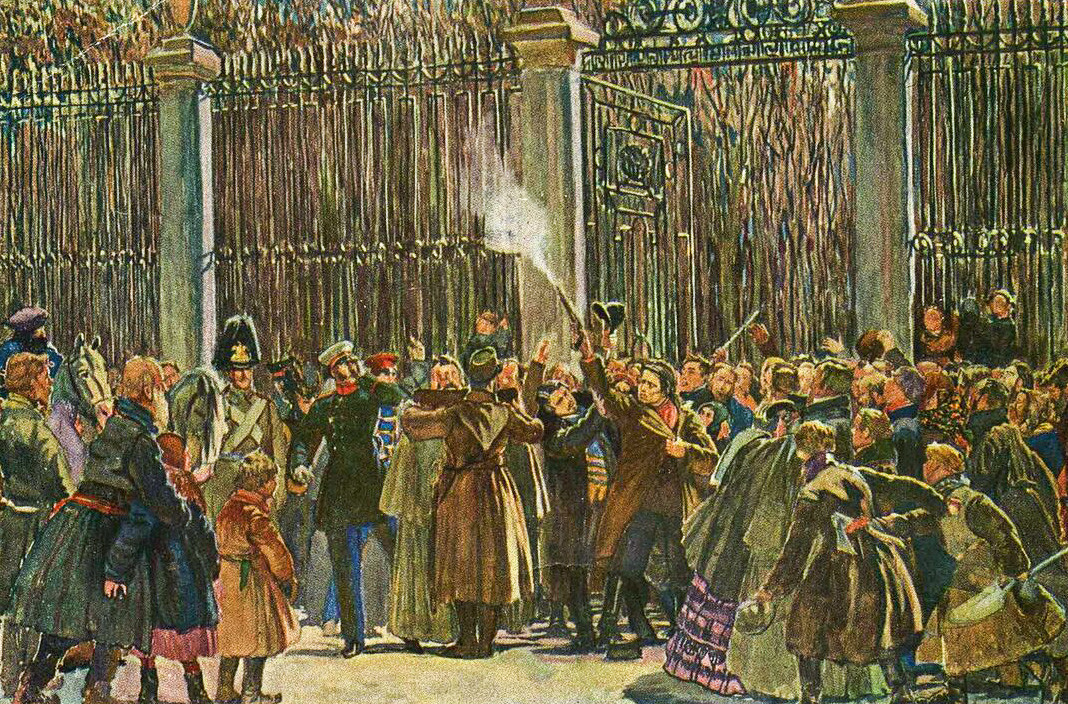 On April 4th, 1866, Emperor Alexander II was exiting the northern gate of the Summer Garden in St. Petersburg, while on a walk. A small crowd of passers-by spontaneously gathered at a respectful distance to see the Emperor walk towards his carriage. And from this crowd, a shot was fired by a 26-year-old Dmitry Karakozov. Luckily, Osip Komissarov, a 28-year-old peasant who worked as a hatmaker's apprentice, was also at the scene, and ended up saving the Emperor.

“I saw this man hurrying through the crowd,” Komissarov remembered. “I could not help watching him, but then, however, I forgot him when the Emperor came up. Suddenly, I see that he has taken out his pistol and is aiming it.” The Emperor paused near his carriage to put on his coat, and that’s when Komissarov hit Karakozov’s hand, so the shot went in the air – this was witnessed by Eduard Totleben, a Russian general who was present in the crowd, and he later confirmed Komissarov taking part in the incident.

“I felt sad and sore, because my people were dying, and so I decided to destroy the evil Tsar and die for my dear people myself,” a proclamation found in the pocket of the shooter, Dmitry Karakozov, read. As he was caught by the crowd, the Emperor asked him: “Why did you try to shoot me?” “You fooled your people – you promised them land, but didn’t give it to them,” Karakozov replied, referring to the abolition of serfdom that happened in 1861, whereupon the peasants had then to buy out their lands from the state. Karakozov turned out to be a member of a terrorist circle, and planned to start a revolution with his murder.

Karakozov was put on trial and executed later in September 1866, while the Tsar’s savior, Osip Komissarov, was granted hereditary nobility. The very evening of the day he saved the Emperor, Komissarov was honored at the Winter Palace, hugged and greeted by Alexander II. 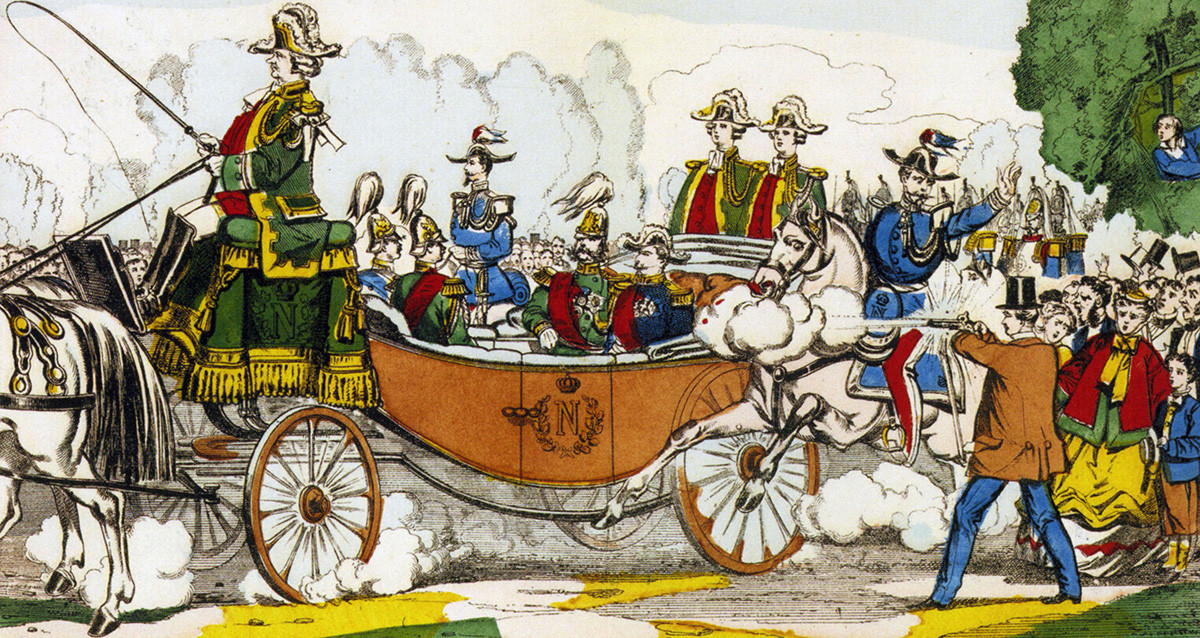 In May 1867, Alexander II with his sons Vladimir and Alexander (the future Alexander III) were in Paris to attend the World Fair of 1867. One day, when the Emperor, his sons, and Emperor Napoleon III were in a carriage exiting the Longchamp Racecourse, a Polish 21-year-old, Anton Berezovsky, ran up to the carriage and shot at the Emperor from a short distance.

However, Berezovsky’s pistol exploded, wounding his hand and sending the bullet into one of the horses. Berezovsky was immediately caught by the crowd. At an interrogation, he fully confessed his deed, saying that he planned to kill the Emperor in the name of the liberation of his homeland, Poland. At the time, Poland was a part of the Russian Empire, and just four years earlier, in 1863, a rebellion against Russian rule was violently suppressed there. Berezovsky’s family was exiled, and the murder was intended as revenge. He served 40 years of hard labor and was set free in 1906. 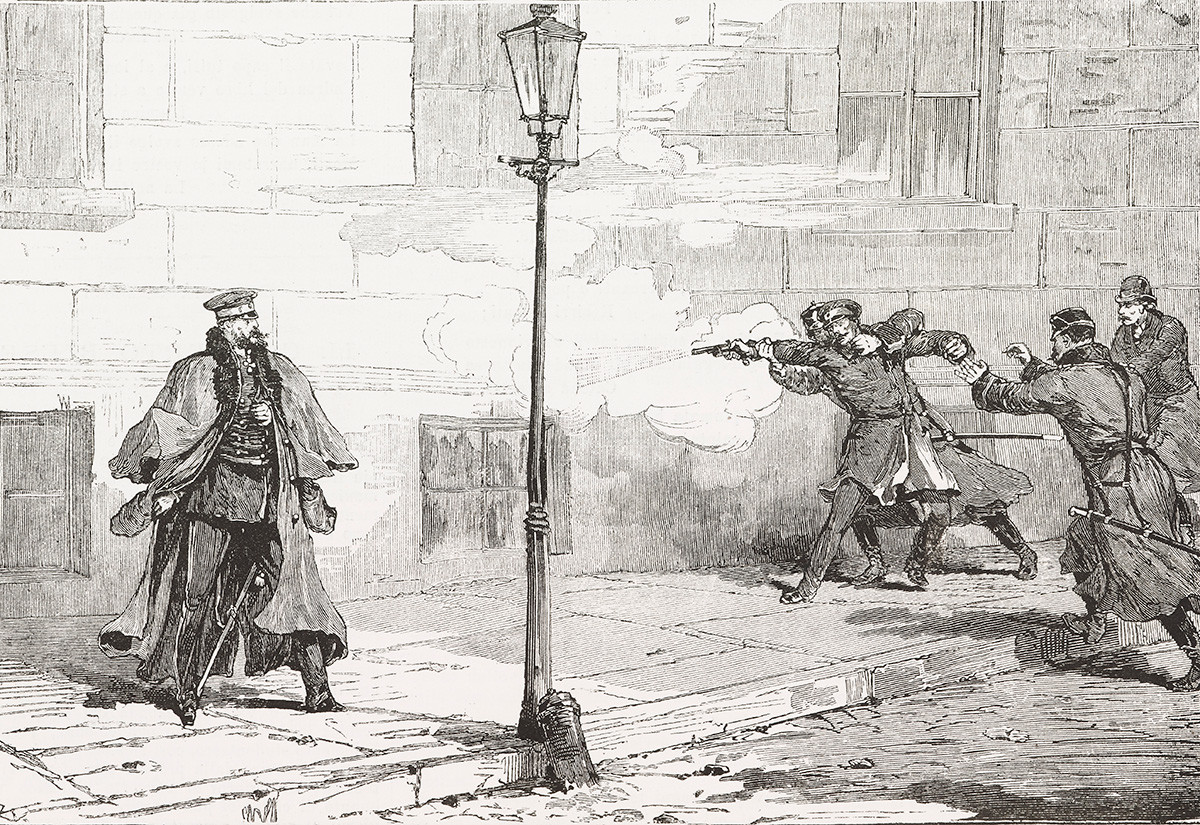 Attack on Emperor Alexander II Romanov by the revolutionary Aleksandr Soloviev, April 14, 1879, St Petersburg, Russia, engraving by Canedi from L'Illustrazione Italiana, No 18, May 4, 1879.

On April 2, 1879, Emperor Alexander II took his daily walk around the Winter Palace, unattended by any guards. Alexander took this habit from his father Nicholas I, who almost always walked around the capital all by himself. His son continued the tradition, even after two attempts on his life.

At the Moika Embankment, the Emperor was fired at from a 12-step distance by a 32-year-old nobleman and retired civil servant, Alexander Soloviev. He was a member of the ‘Zemlya i Volya’ (“Land and Liberty,” a revolutionary group that later gave birth to the first terrorist organization, ‘Narodnaya Volya’). The first shot missed the Emperor, and he had to run for his life (probably the first time in Russian history!)

Soloviev chased Alexander II down the street and fired two more shots from a closer distance. After the third shot, a gendarme on patrol caught up with Soloviev and hit him with a saber so hard that the blade bent! Still, Soloviev managed to fire another shot and make a run for it, making the fifth shot at the crowd of people that pursued him, before finally being caught.

According to Alexander Soloviev’s published testimony, he acted independently, but “in the spirit of the program of his party.” He was hanged three days later in St. Petersburg, with a crowd of about 70,000 watching the execution.

The attempt to blow up the imperial train near Moscow: scene after the explosion

The members of Narodnaya Volya knew that in November 1879, the Imperial Family and their suite would travel from a Crimea vacation back to St. Petersburg through Moscow, and wanted to blow up their train. The Emperor’s train was usually traveling 30 minutes behind the first train, which carried the royal belongings and their entourage - servants, ladies-in-waiting, etc.

The terrorists placed three bombs along the route of the Emperor’s train: the first one near Odessa, the second one near Alexandrovsk, in Zaporozhye Region (Ukraine), and the third one on the approach to Moscow. However, the train changed directions and didn’t go through Odessa, while the second bomb at Alexandrovsk didn’t go off.

Further up the road, in Kharkov, the train with the entourage was delayed for technical reasons, so the Emperor’s train went forward – with the terrorists none the wiser! So, they naturally let the first train pass, and targeted the second one. On November 19, a bomb exploded just where and when the militants wanted it to – under the fourth car of the second train. Except it was the wrong train. Instead of Alexander II’s car, they blew up the fruit storage, so, luckily, nobody was killed.

5th attempt: A palace explosion that missed the target 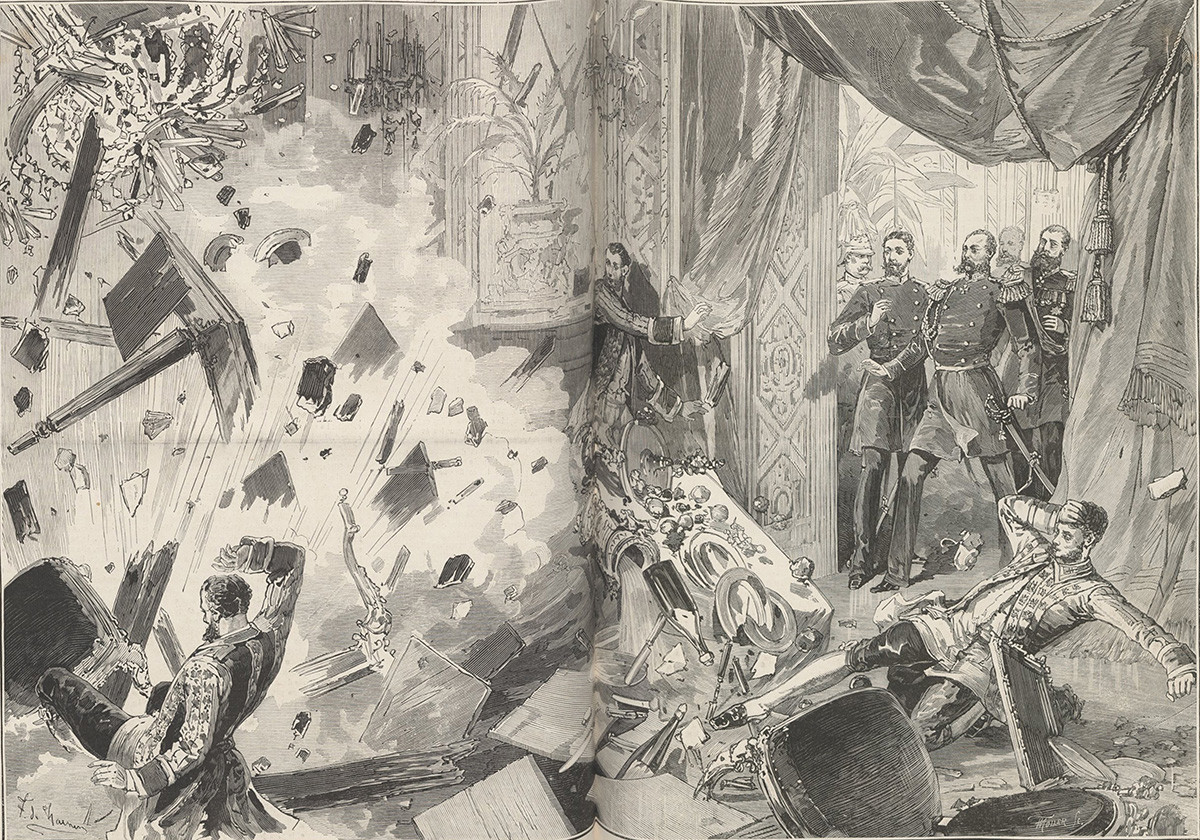 Narodnaya Volya made yet another attempt on the Emperor’s life - this time at his home in the Winter Palace. In September 1879, even before the failed train explosion, Stepan Khalturin, a 22-year-old former peasant turned revolutionary propagandist, applied for a job as a carpenter at the palace, which allowed him to have a room in the basement. Unnoticed and unchecked by security, by February 1880, he amassed about 32 kilos of dynamite in the basement.

On February 5, 1880, Khalturin carried out the explosion right in his room, two levels beneath the dining room, where the Emperor was to receive Prince Alexander of Hesse (Prince Philip’s ancestor and the brother of Alexander’s wife, Empress Maria). But the Prince was half an hour late, and Stepan Khalturin wasn’t aware of that. The explosion ended up killing 11 guards on the level below the dining room, and wounded 56 other people. The Emperor and his family were unharmed. 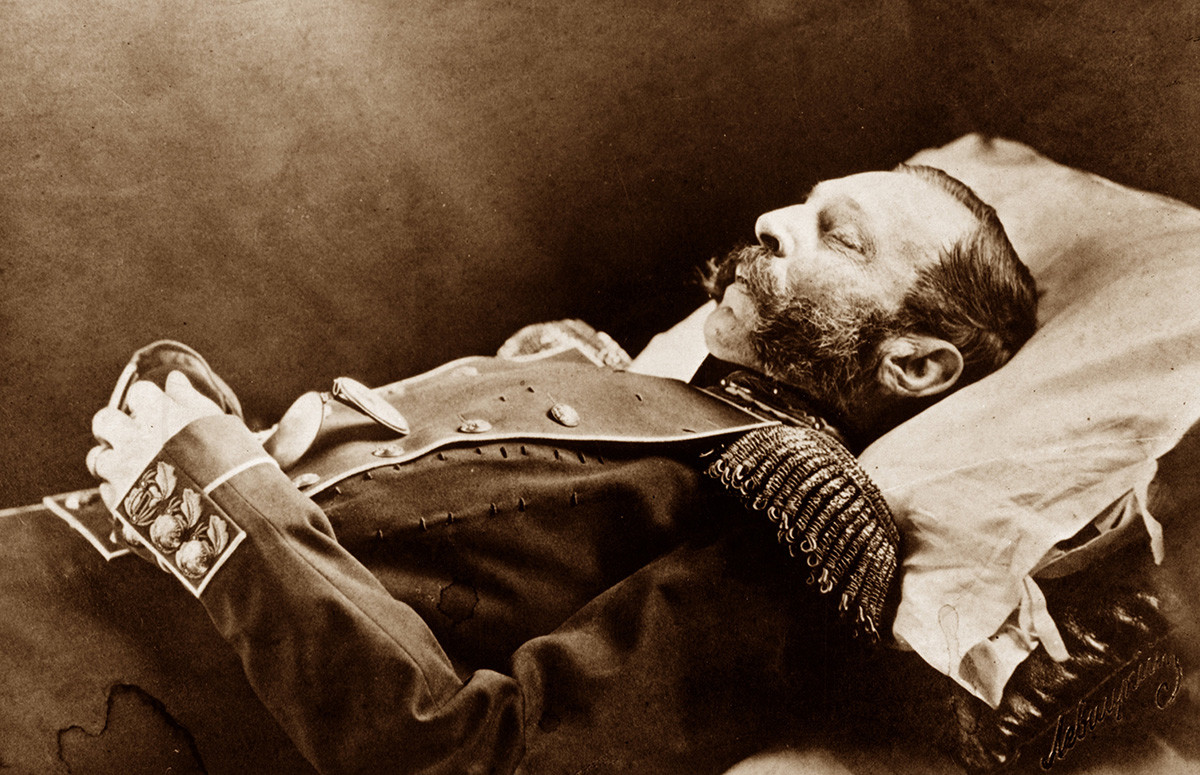 Alexander II on his deathbed (photo).

* * *
There were two more attempts to murder Alexander II that didn’t happen. In the first case, a bomb was placed under the bridge where the Emperor’s carriage was to later pass, but the militant who was to ignite it messed up by not showing up at the correct time.

The second failed attempt was to take place on March 1, 1881: the terrorists created an underground passage under the street, intending to plant a mine, just as during the other failed plan, but the route of the carriage was changed. This time, the Narodnaya Volya militants found out ahead of time, and decided to attack the Emperor with hand grenades. – an attempt that was, unfortunately, successful. Read more about it here.