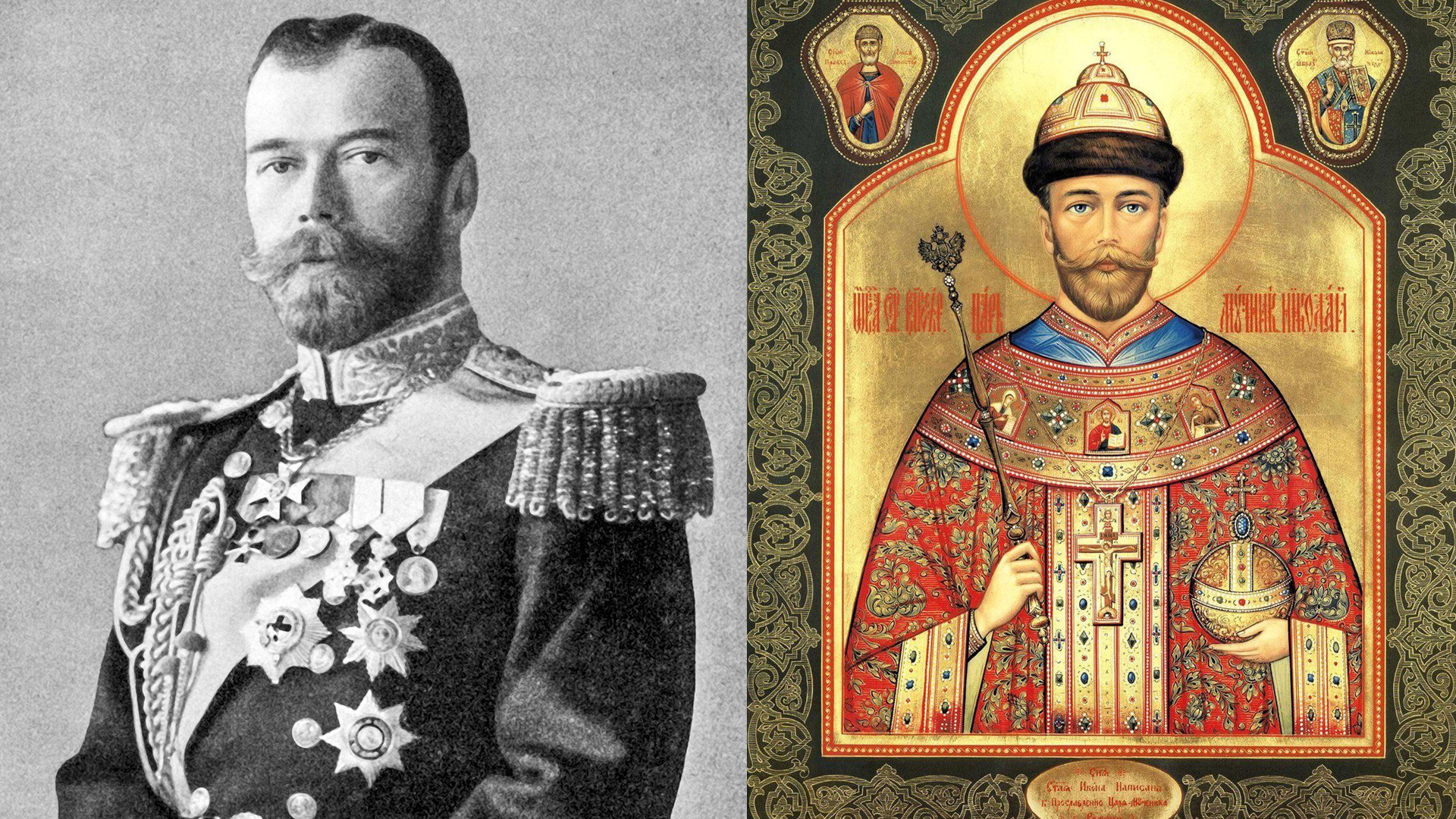 Hulton Archive/Getty Images; Patriarchia.ru
The tradition of canonizing rulers appeared in Ancient Russia as early as in the 10th century, when the country had just adopted Christianity. More often sainthood was bestowed not for services to the country, but for a righteous life or martyrdom. 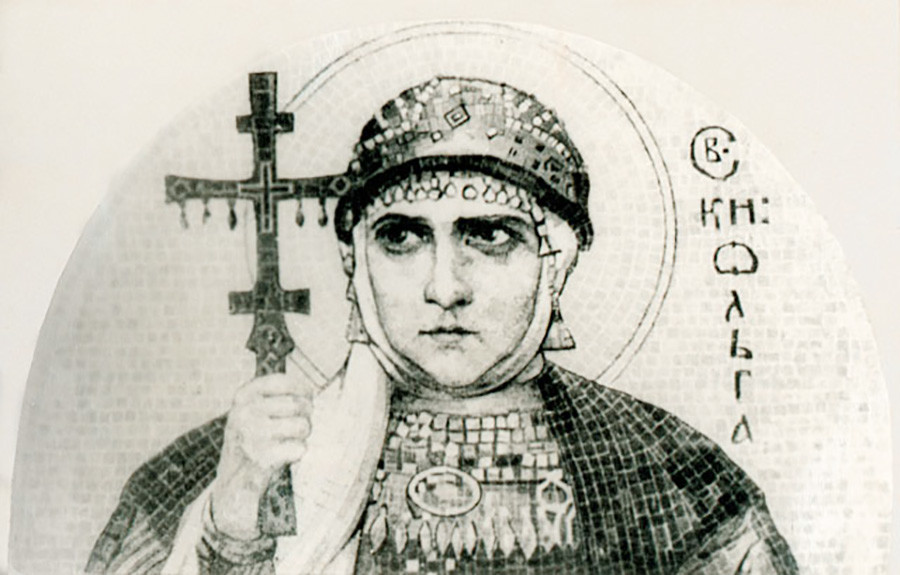 Nicholas Roerich. Saint Olga. A sketch for a mosaic

Olga was the wife of the Kievan Rus Prince Igor, the son of the Varangian Prince Rurik who, legend has it, was the founder of the Russian state. Igor was killed while collecting tribute from the Slavic tribe of the Drevlians, and Olga became queen regent and ruled until her son Svyatoslav came of age. In revenge for the murder of her husband, she carried out several brutal reprisals against the Drevlians. 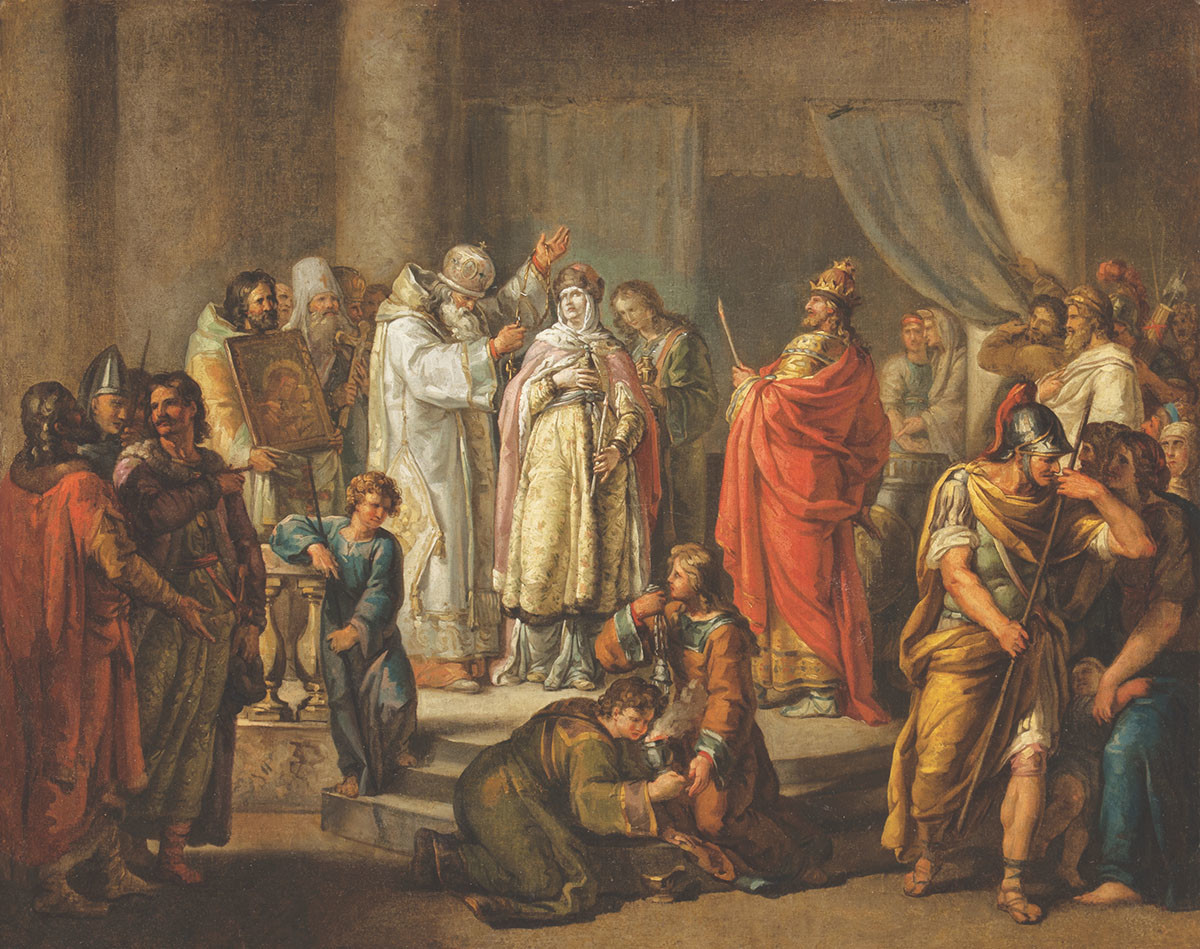 Olga was the first Russian ruler to become a Christian. Furthermore, she was baptized even before Russia adopted Christianity. "She shone among the pagans, like a pearl in the mud," the authors of old Russian chronicles later wrote about her.

Olga became one of the first saints venerated in Russia. Her grandson, Prince Vladimir, who converted Russia to Christianity, had his grandmother's body transferred into one of the first churches. According to legend, her body had not been touched by decay. The princess became a saint before Christianity was divided into the Western and Eastern churches, so she is also revered in the Roman Catholic Church, as Saint Olga of Kiev. 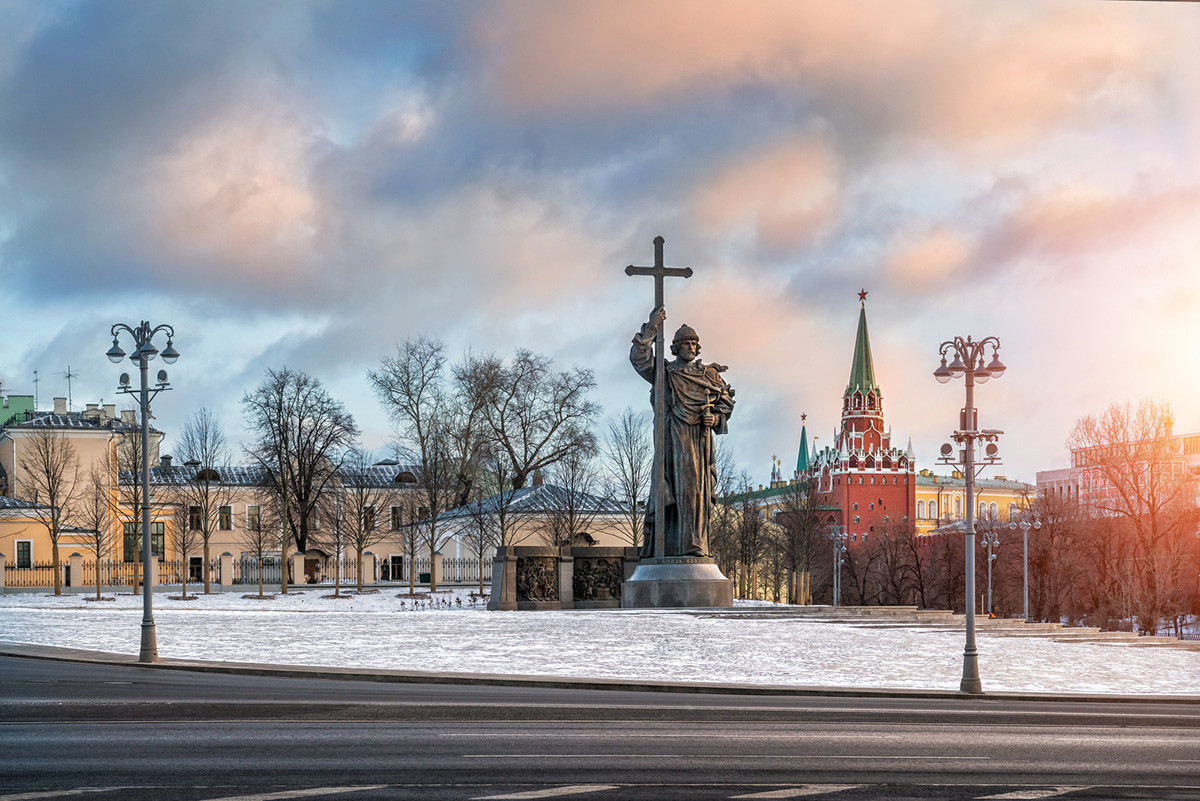 Olga's grandson, Vladimir the Great (also known as Saint Vladimir and Vladimir Krasno Solnyshko (the Fair Sun)) is one of the most venerated rulers of Ancient Rus. He is primarily known as the ruler who converted Russia to Christianity. According to legend, Vladimir was deciding which of the three world religions to convert his subjects to, and for various reasons he settled on Christianity. 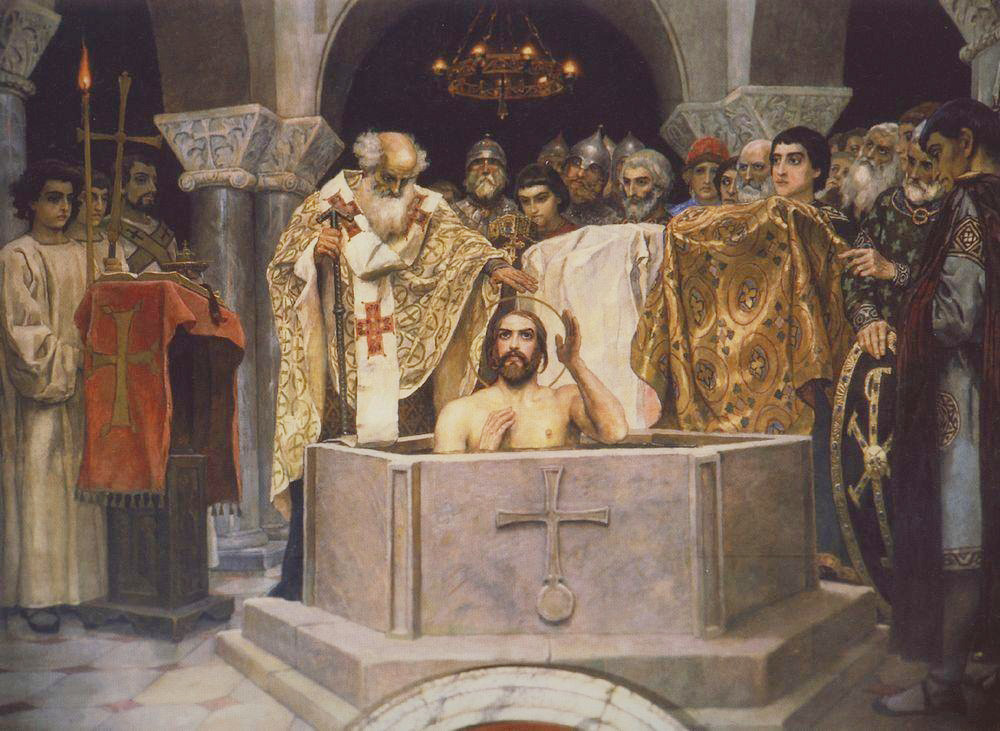 Viktor Vasnetsov. Baptism of Prince Vladimir. A fragment of a fresco in the Vladimir Cathedral in Kiev

He was canonized for the conversion of the pagan Slavic tribes to the Christian faith. Churches dedicated to Vladimir are scattered throughout Russia and Ukraine (since he was the prince of Kievan Rus), and one of the cities on the Golden Ring of Russia is named after him. 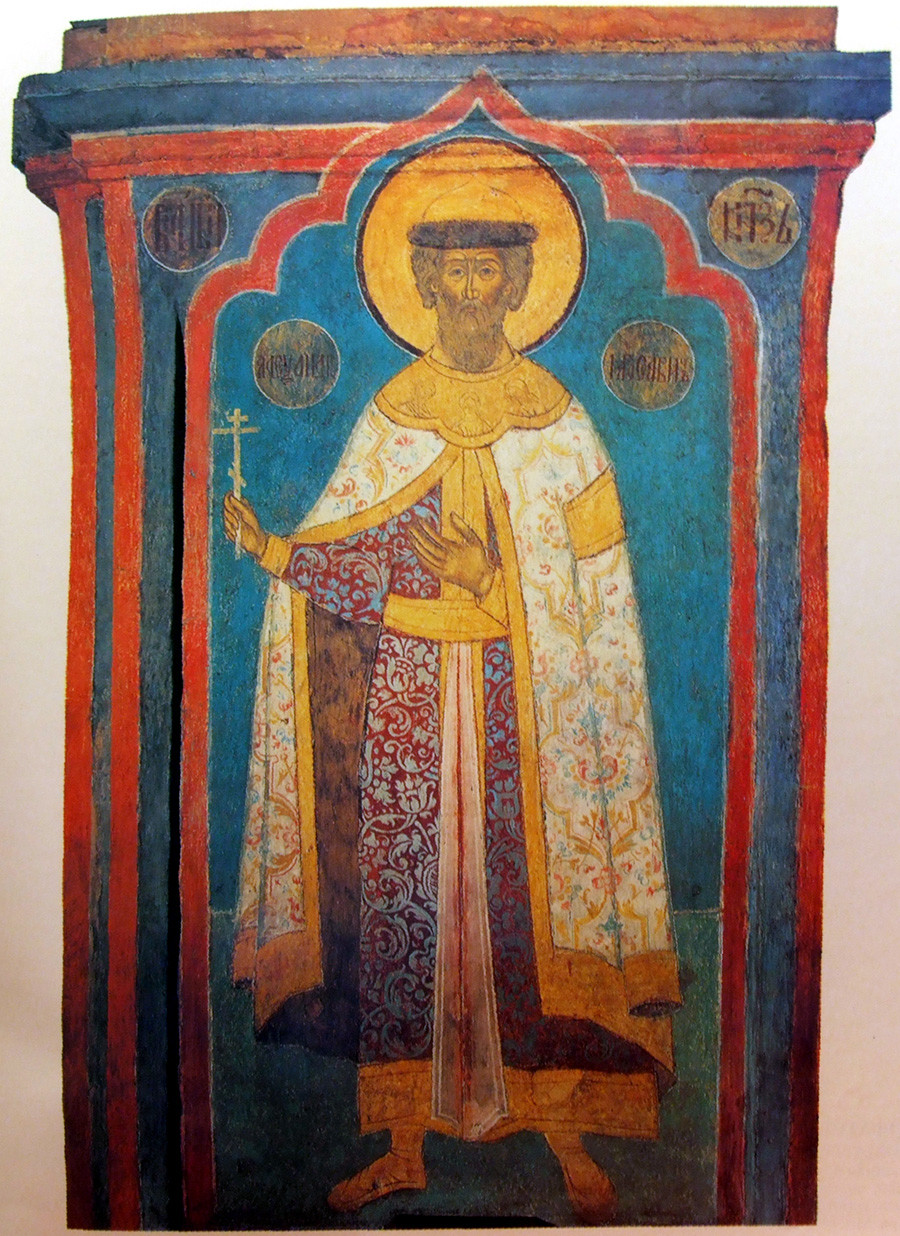 Saint Alexander Nevsky. A fresco in the Cathedral of the Archangel in the Moscow Kremlin

Alexander Nevsky was best known for his successes on the battlefield against foreign invaders, who attacked Russia from the east and west. Legend has it that he did not lose a single battle. One of his most memorable victories was over the Livonian Order in the Battle of the Ice in 1242. Over the years, Nevsky developed a heroic image as defender of Russia from its enemies, which was also promoted in Soviet times, in particular in Sergei Eisenstein's biopic Alexander Nevsky, commissioned by the government. 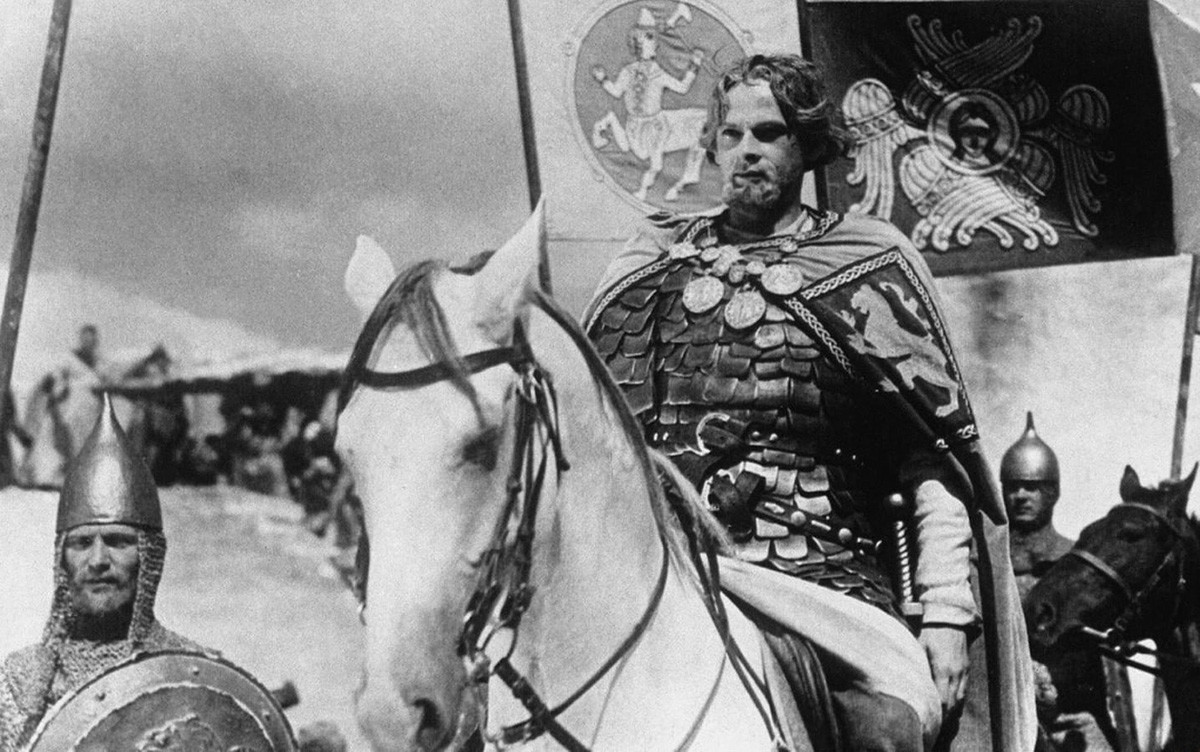 A still from 'Alexander Nevsky' film

The Mongols were another problem that Nevsky had to deal with, as they exacted tribute from Russia and raided its lands. According to some sources, Alexander was in correspondence with the Pope, who offered him help in the fight against the Mongol armies in exchange for Russia agreeing to become subordinated to the Holy See. Alexander refused and continued to fight against the Mongol armies alone. Thus, he is also remembered as a defender of the Russian Orthodox Church against the Vatican. Nevsky was canonized in 1547. His remains were moved several times as a holy relic. After St. Petersburg was founded, Peter the Great ordered them to be brought to a specially rebuilt cathedral in the city called Saint Alexander Nevsky Lavra. 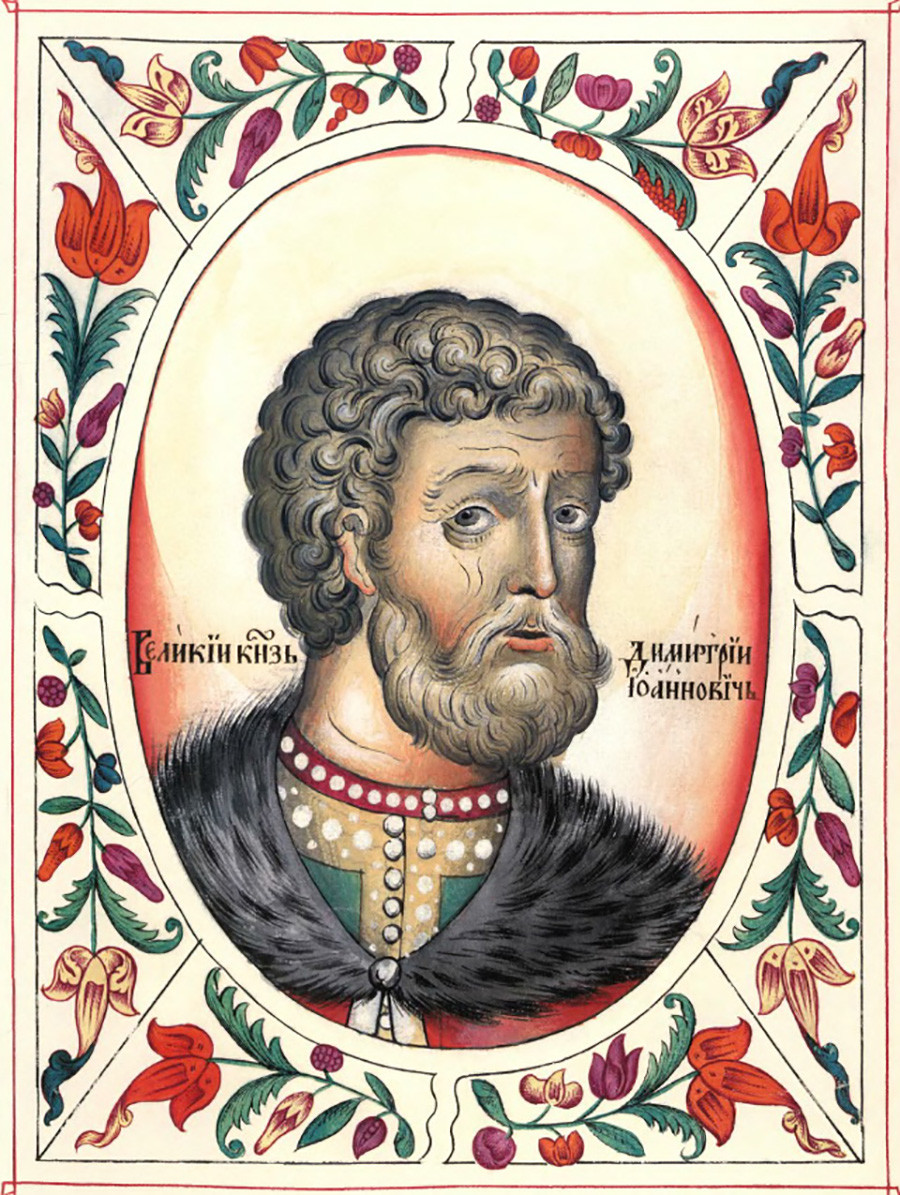 Dmitry Donskoy is primarily known for his victory over the Mongol armies in the Battle of Kulikovo, before which he and his army received the blessing of one of Russia’s main saints, Sergius of Radonezh. That victory is considered a turning point in Russia's liberation from the centuries-long Mongol yoke. Donskoy went down in history as the epitome of military glory. So much so that during World War II a tank column was named after him. Interestingly, the column was set up with money donated by the church. 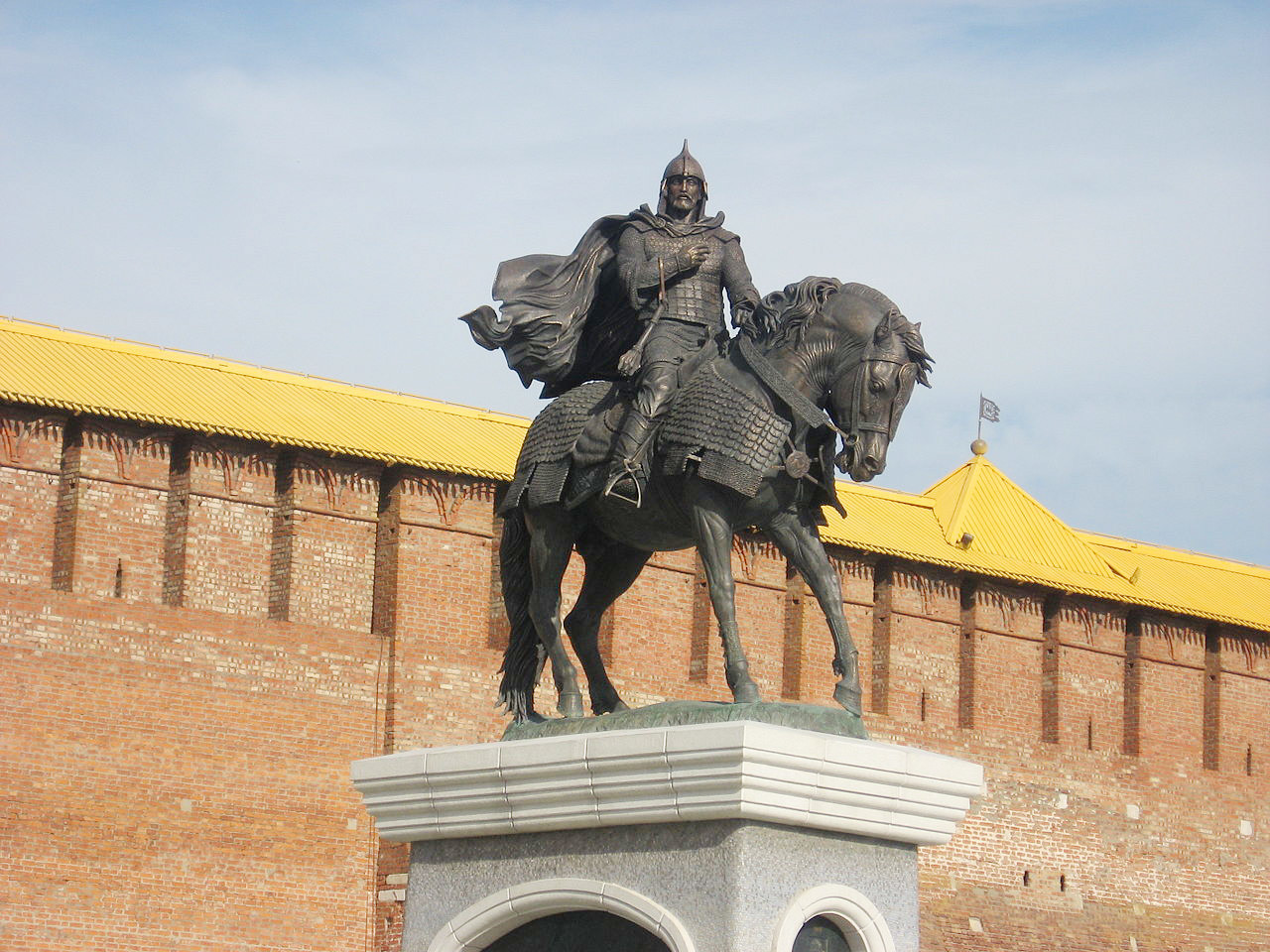 Monument to Dmitry Donskoy outside the Kolomna Kremlin

Donskoy was canonized only in 1988 and is revered by the church for his modesty and righteous life. In the 19th century, the main historiographer of Imperial Russia, Nikolai Karamzin, wrote: "Demetrius, being showered with the praises of a grateful people, cast his eyes down and directed his heart solely to God the All-Creating." Legend has it that the Moscow prince went to church and fasted every day. Donskoy built the white-stone Kremlin in Moscow and several monasteries. 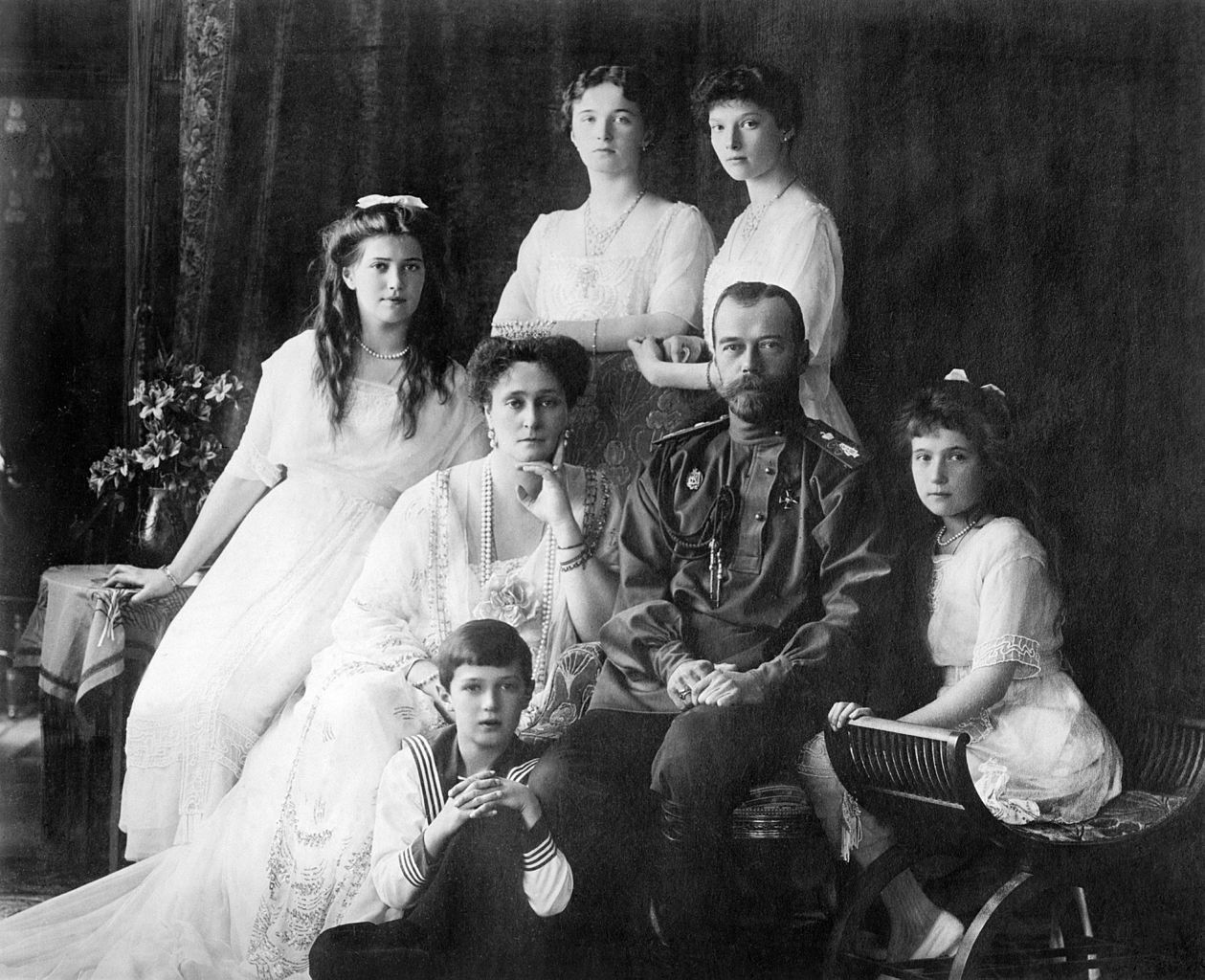 Nicholas II with his wife and children

The last Russian tsar was executed by the Soviet authorities in Yekaterinburg together with his family. In 2000, the Russian Orthodox Church canonized them as martyrs, and the life of Nicholas II is commemorated on icons both by himself and with his family. 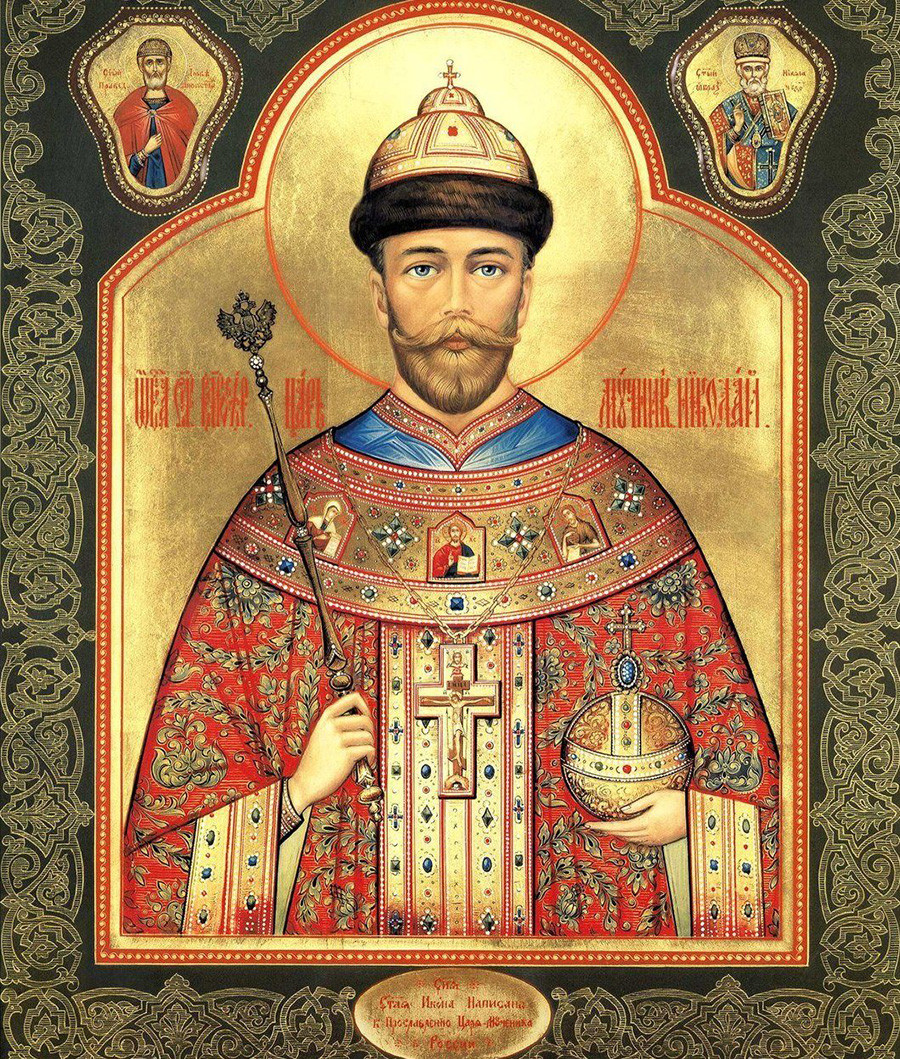 An icon with Nicholas II

The decision to canonize Nicholas caused a lot of controversy in Russia. One of the main objections was that the Romanov family became martyrs not for Christ, but as a result of political persecution. Arguments in favor of the move included the veneration that a large number of people felt for the Romanov family, and the work the empress and her daughters did as nurses during World War I.