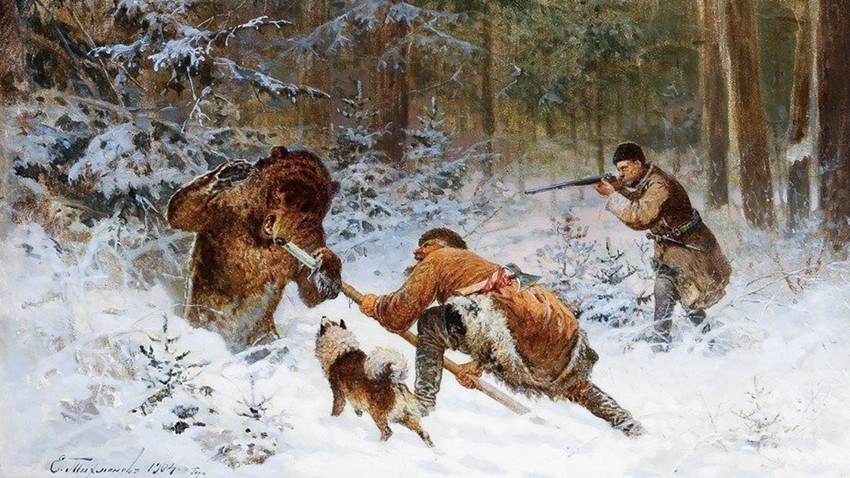 Hunting a bear using a rogatina.

Evgeniy Tikhmenev
Hand-to-paw combat, vodka as a bear trap, and why it’s (almost) useless to shoot a bear in the head. Everything you didn’t know about bear hunting the Russian way.

DISCLAIMER: Russia Beyond staff are strongly against any kind of animal abuse including, of course, hunting wild animals such as bears. We wrote this article for information and historical references only.

“For a long time we were skiing on the old ski trail. At last we stopped at a spruce tree that had been torn up and covered with snow. Beneath it was the den. When everything was ready, the forester began to poke a long pole under the root of an upturned century-old spruce. My uncle, smiling, said to me: "Aim at the shoulder blade, don't miss. It's your bear, aim, but don't get too excited."

Suddenly, under the snow, there was a growl, and then a roar... At the same moment, the huge figure of a bear grew almost half out of the snow. Without realizing it, I took aim and pulled both triggers.

The thunder of a shot and a terrible roar... I was leaning against a pine tree, neither alive nor dead, and I couldn't see straight through the smoke. “Bravo, well done! On the spot!” my uncle's voice spoke. They scattered the snow and pulled out a huge beast, it was sixteen poods (262 kilos). Both bullets hit the heart!”

That’s how Russian writer Vladimir Gilyarovsky (1853-1935) described hunting a bear with his relatives when he was just 15! But shooting a bear just awakened from hibernation was only one of the techniques. Gilyarovsky describes spears, bear traps, pits covered with brushwood with sharp stakes at the bottom – bear hunting was an ancient Russian tradition.

The one you’d better not mention 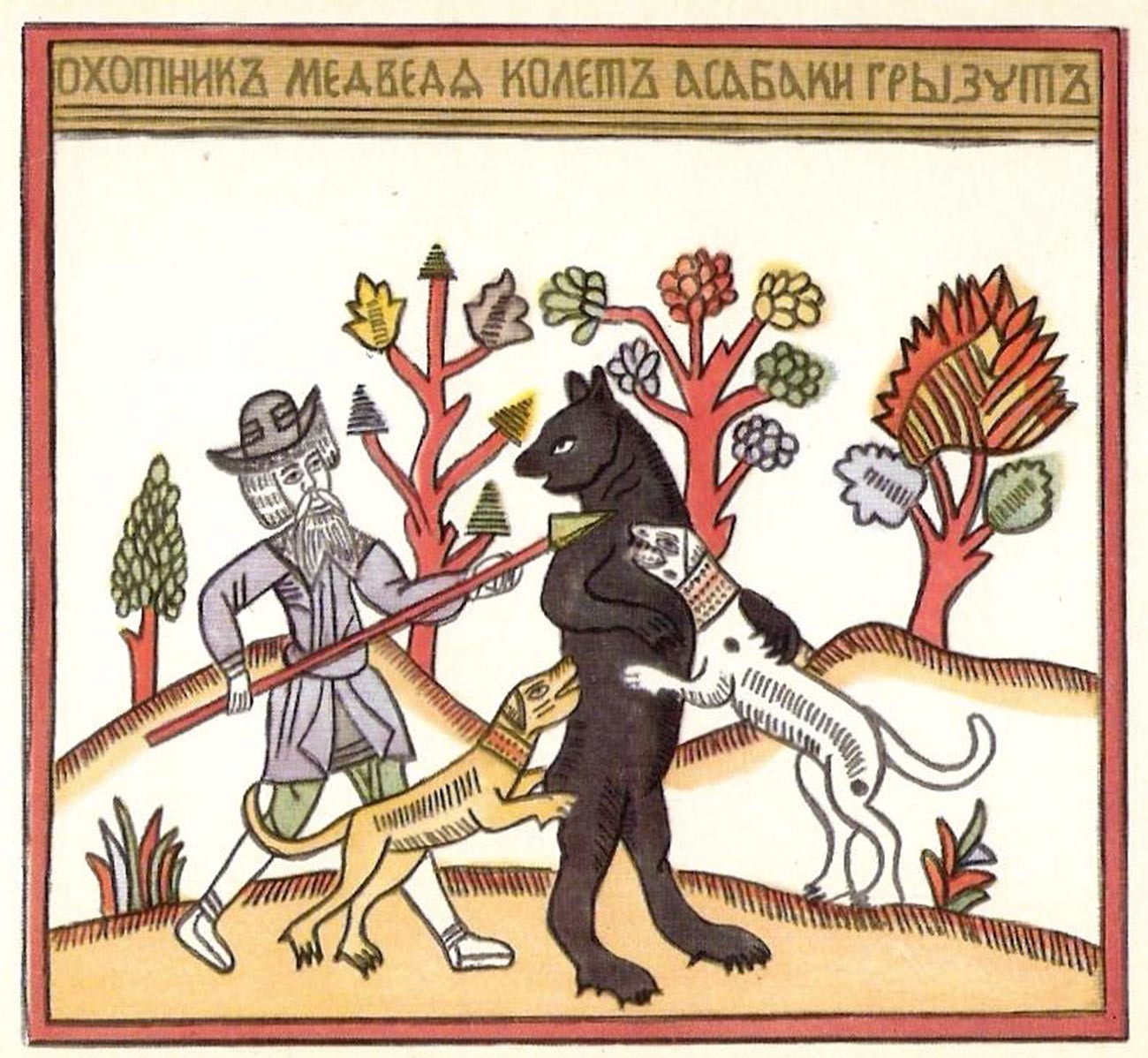 "The hunter stabs the bear, and the dogs gnaw," a Russian folk picture.

Russians were always fascinated with bears, and bear taming was an ancient art among the Russian skomorokhs - bands of troubadours. Meanwhile, successfully hunting a bear was a serious ‘level-up’ for any hunter and also carried mystical connotations, because bears were considered “the master of the forest”. In Russia, “Master” was a usual moniker for a bear, along with ‘medved’ (‘the one who knows the honey’) – because the beast was so scary that superstitions existed against calling him by his name – ‘ber’ in Old Russian.

Hunting a Russian bear can obviously have lethal consequences. A grown-up brown bear can weigh up to 400 kgs. He can run as fast as a horse and do long jumps. A bear’s eyesight is not very good, but his hearing and smell are impeccable. And when bears are awakened from hibernation, scared or wounded, they are especially dangerous. So even if a hunt went wrong and the hunters couldn’t immediately bring down a bear that was awakened or wounded, and the beast ran into the woods, the hunters had to organize a raid. Such a bear, mad with frenzy and already bleeding, could be very dangerous if he ran into a village.

Attacking a bear is no easy task whatsoever. His cone-shaped skull has thick bones, so shooting a bear in the head, Russian hunters have learned, can leave the beast unharmed: the bullet mostly slides against the skull’s side, passes on a tangent and does not cause serious damage. So hunting a bear, hunters usually aim for the animal’s heart.

5 Russian ways to hunt a bear 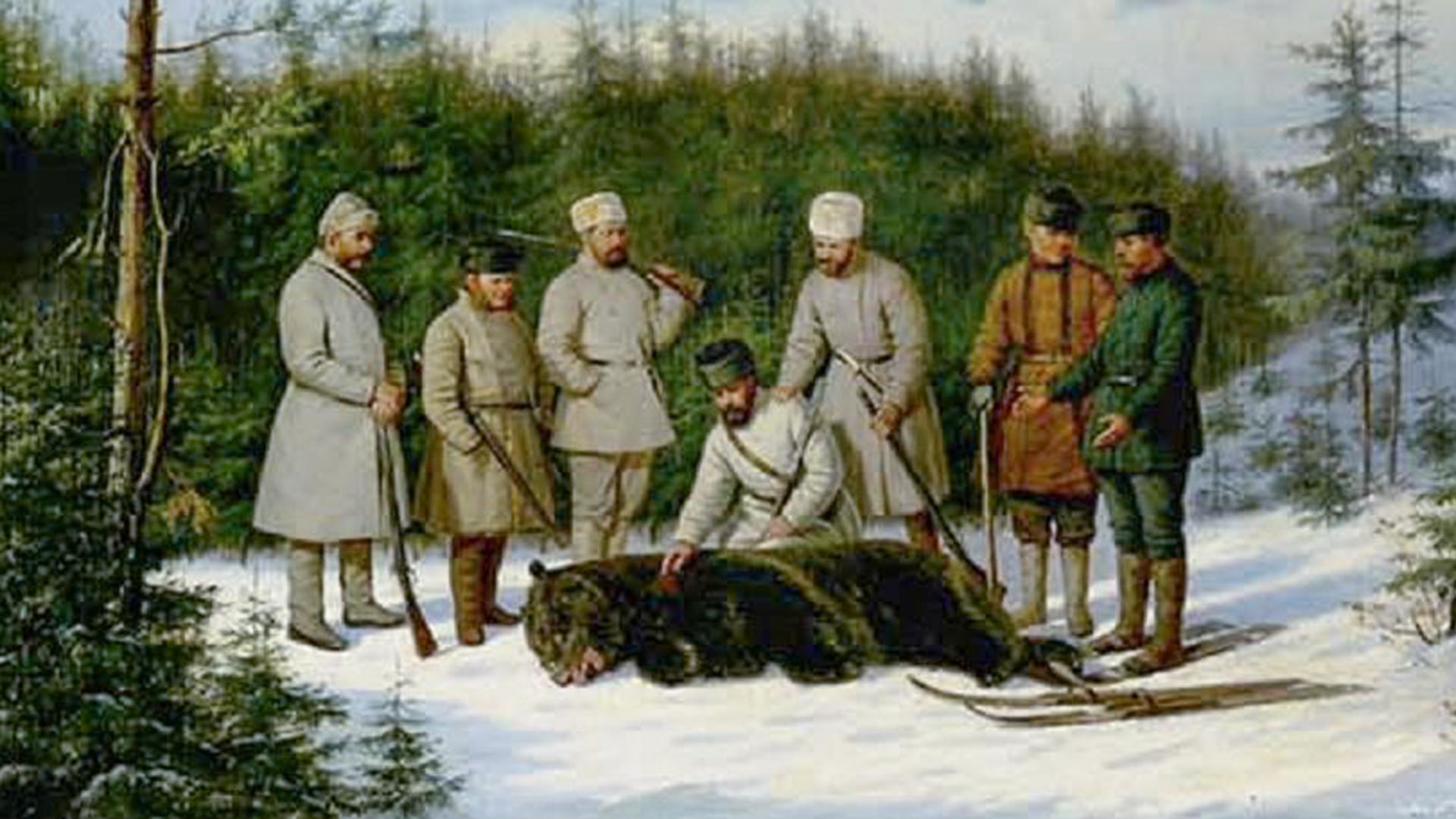 Long before firearms were available to the Russian hunters, they devised ways to bring down the Master using bladed weapons, spears, and traps. But before any bear hunt, Russian men followed certain traditions. Before the hunt, everybody who participated took a Russian bath. They also abstained from sex. All this was done to minimize the bodily smells, so that the bear, who has a great sense of smell, would have minimum chances to notice the hunters approaching. Hunters even kept their clothes for a night in a sack with pine and spruce branches, to make them smell like the forest. 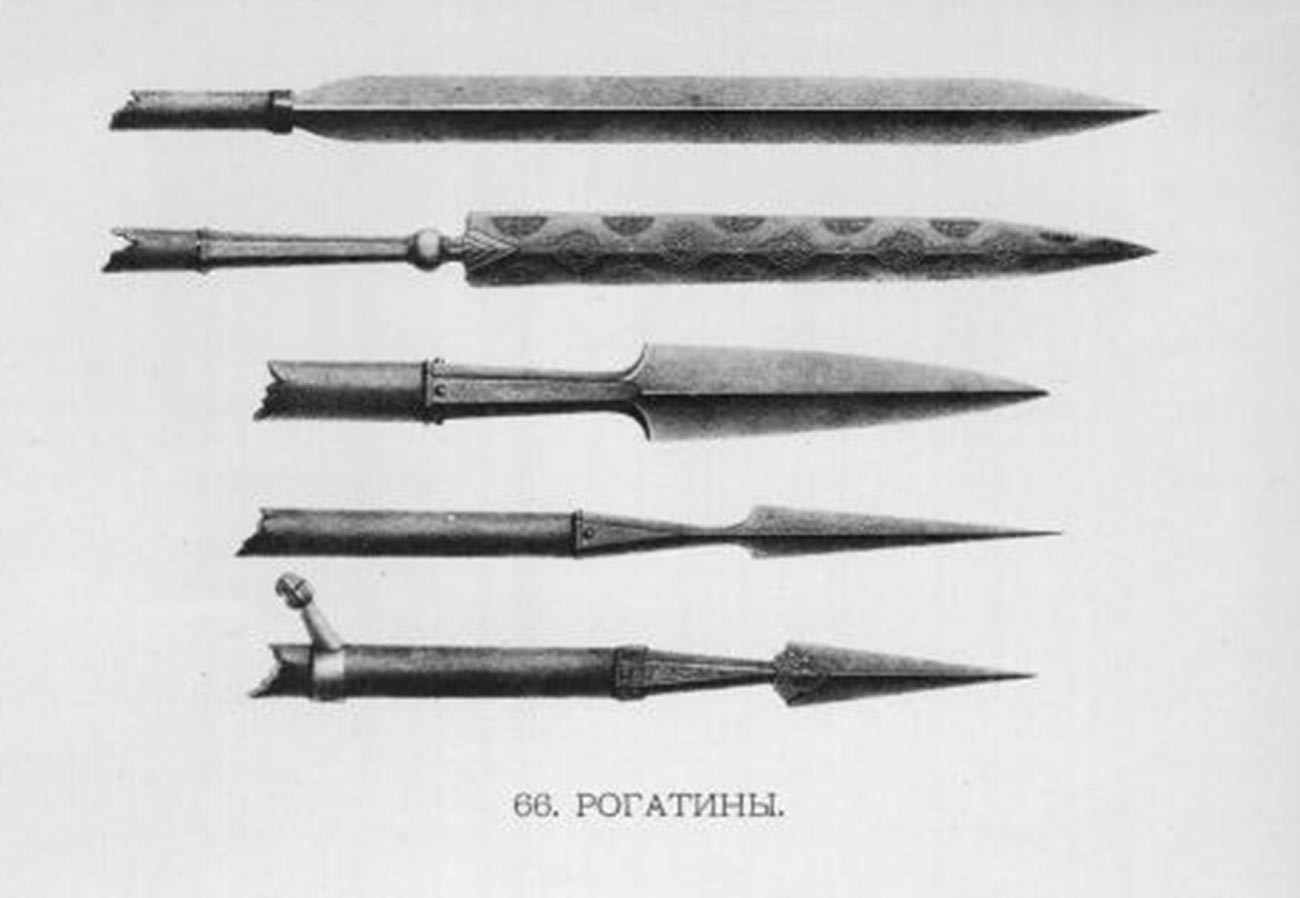 ‘Rogatina’ (derived from ‘rog’, ‘horn’ in Russian) was a special bear-hunting spear – short, with a heavy shaft. The most important part was its wide, double-edged leaflike blade with a length of 20 to 60 cm and a width of up to 7 cm. This blade leaves wounds as wide and profusely bleeding as possible.

The rogatina was usually used to keep the bear at distance while other hunters bring him down with spears. Anyway, this was the most dangerous way of hunting a bear only the most skilled hunters could manage.

Bear traps and baits (including vodka!) 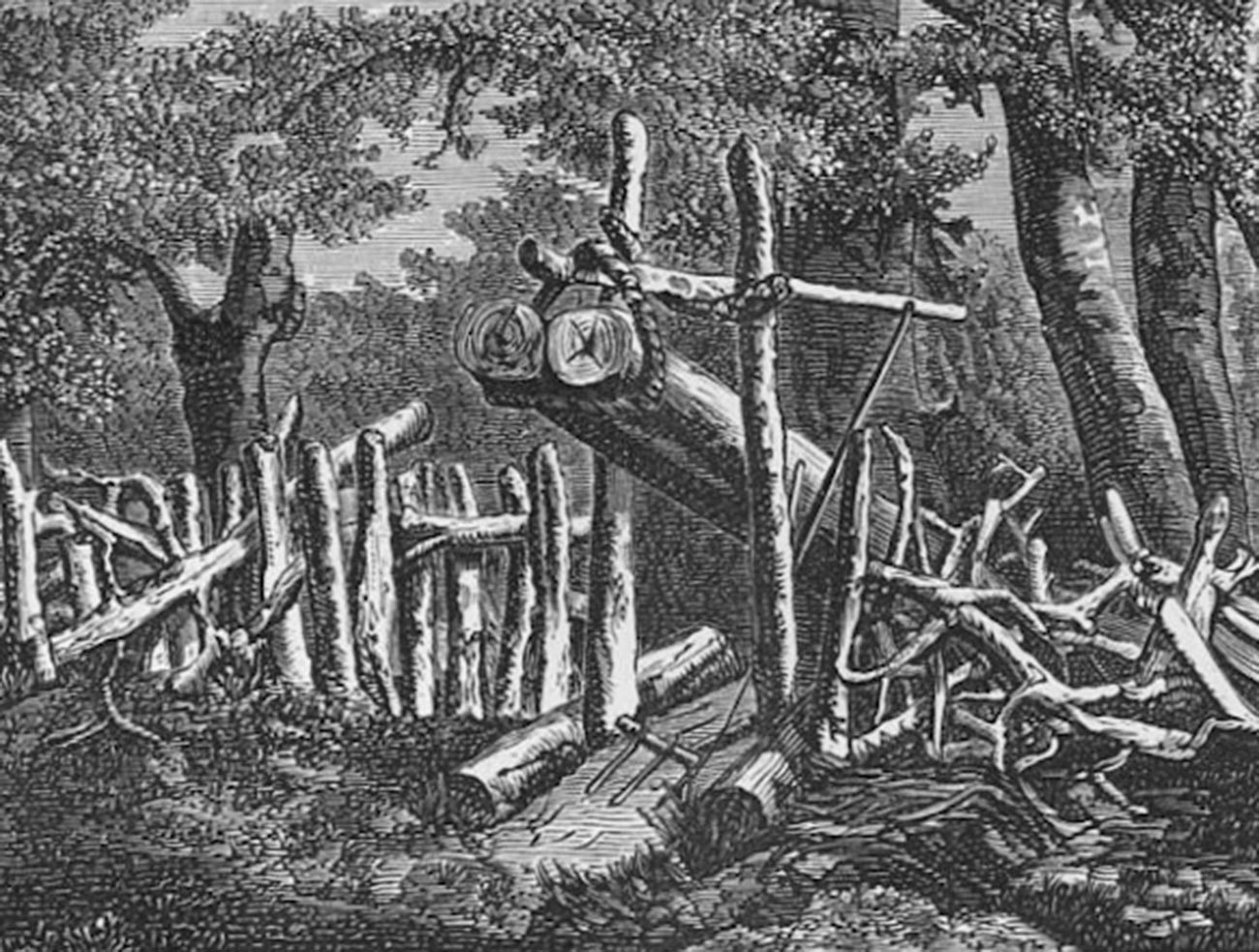 Russians devised bear traps made just of several logs and poles. One of them, called ‘schemitsa’ (‘the squeezer’) is described in 1885 in an Olonets (Karelia) newspaper. It is basically two heavy logs that fall over on a bear’s paw while he tries to grab a piece of rotten meat left as bait. After the logs fall, the bear is trapped and dies of starvation if the trap is left unattended, otherwise he’s killed by the hunters who wait close by.

Of course, bears could also be trapped in pits dug in the earth, with wooden spikes on the bottom. Such pits were masked with leaves and brushwood and dug in the places where bears feed before their winter hibernation. 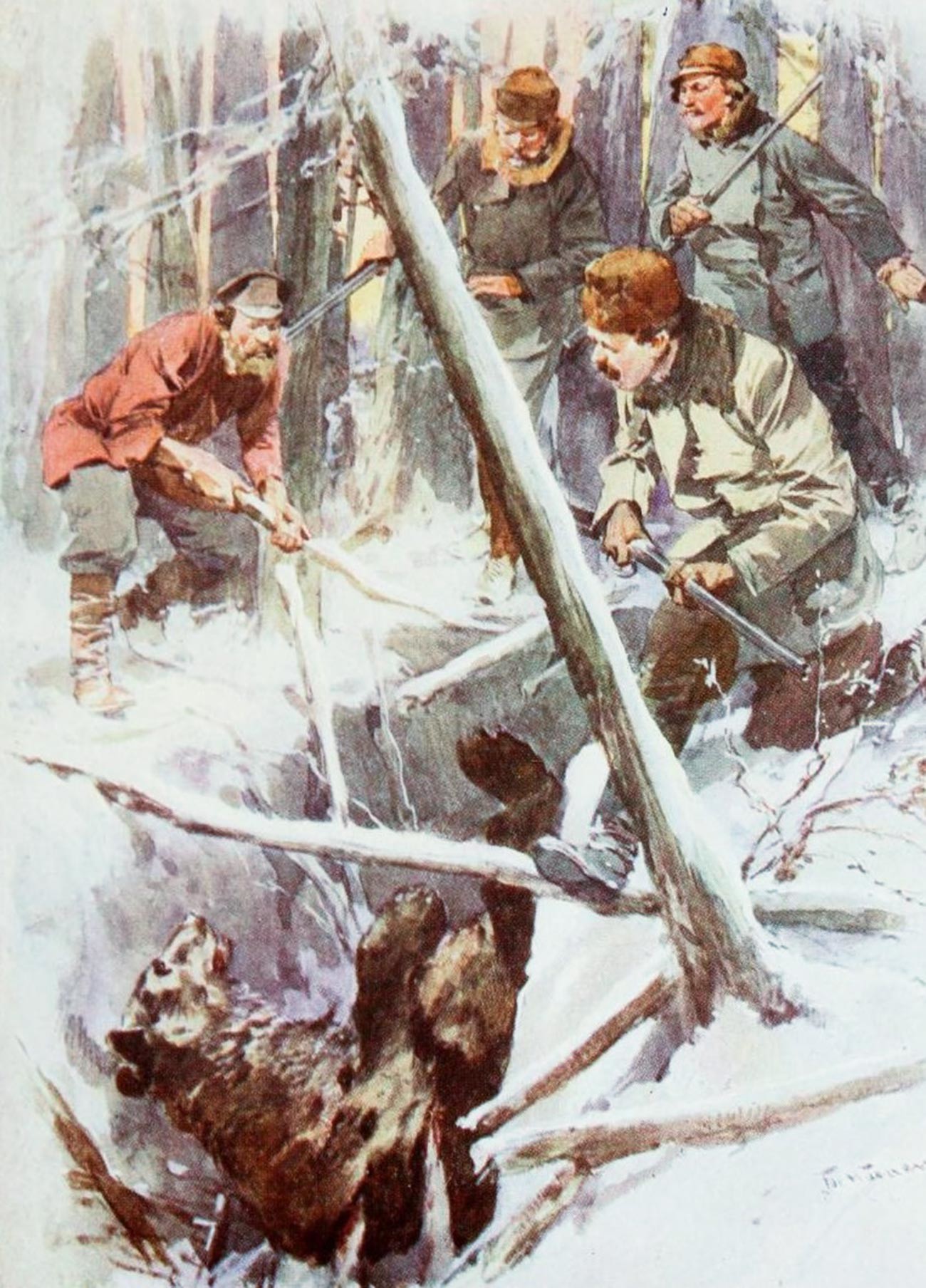 Trapping a bear in a ravine.

Dead cows or pigs (or their severed heads) could be used as bait for a bear, too. Tied to a tree deep in the woods, the meat attracts bears who would come at dusk and gnaw on it – and then the hunters would attack it from the shelter. Surprisingly, alcohol could be used as a trap – if a bear was too heavy and menacing, the hunters just left a bucket of vodka near the bait, so that the bear would drink it after he eats and then fall asleep – easy prey for hunters.

Hunting bears ‘at the oats’ 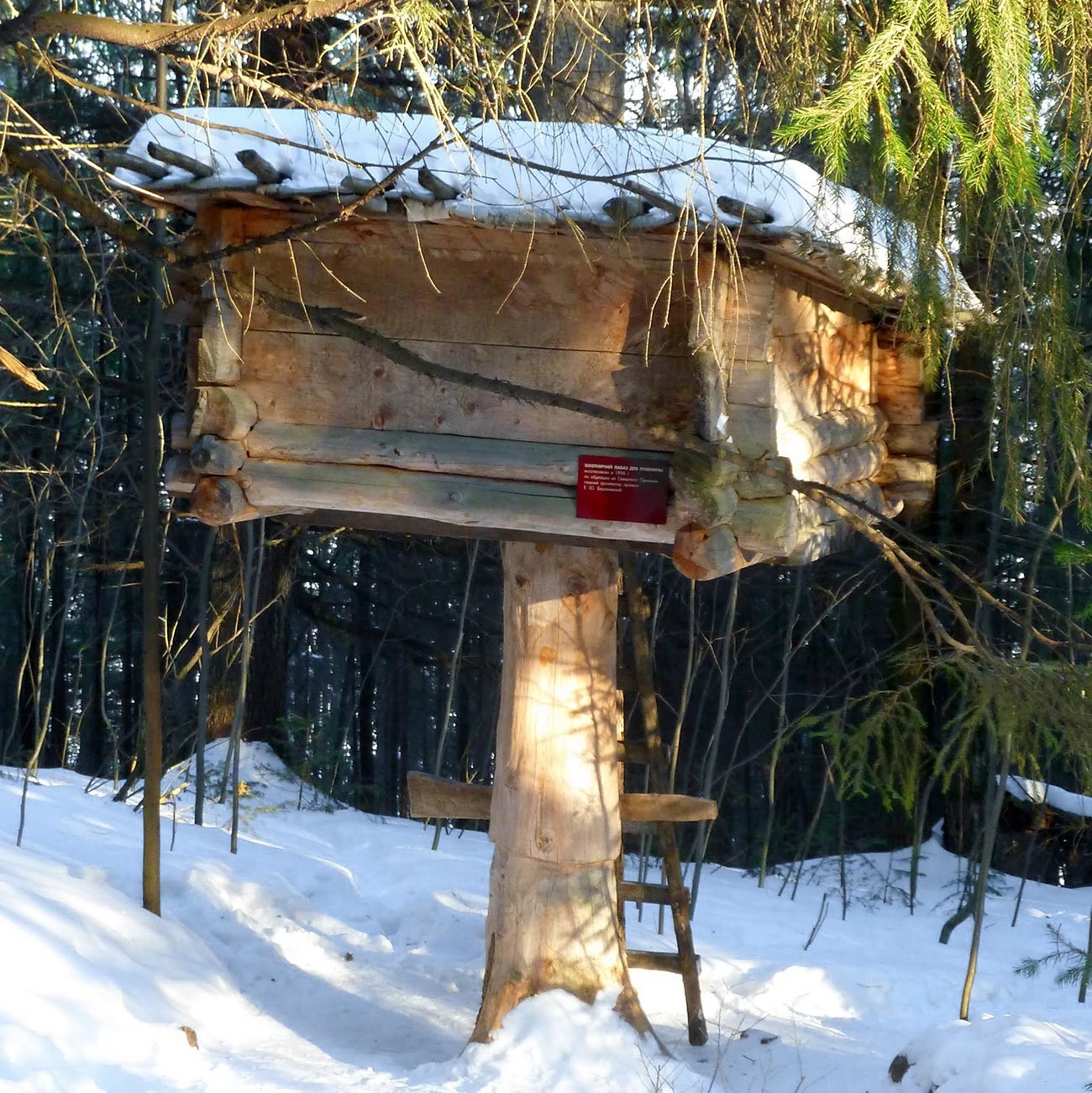 A model of a hunter's tree hideaway

Before hibernation, as the fall sets in, bears would want to gain some weight. They love oats, and frequently come to fields to eat the succulent grains. Bears could be hunted while doing this, but the hunter shouldn’t be present in the field, or he becomes the prey for one bear, maybe several.

To hunt bears ‘at the oats,’ a hunter constructs a little treetop platform where he could wait and observe the bear feeding. It should be higher than five meters above the ground, and the hunter must remain totally silent – and, above all, scentless. Experienced hunters don’t shave for weeks before going on a bear hunt, they don’t smoke or drink alcohol and refrain from using any deodorants. Clothes and shoes are ventilated to get rid of all sorts of odors.

A hunter waits in his tree shelter until the bear is close enough to lay an accurate shot, aiming at the heart. It is very important to check if the bear is really dead before approaching the body – bears are clever and cunning and even wounded, can lay and wait to land their last mortal blow on a careless hunter. 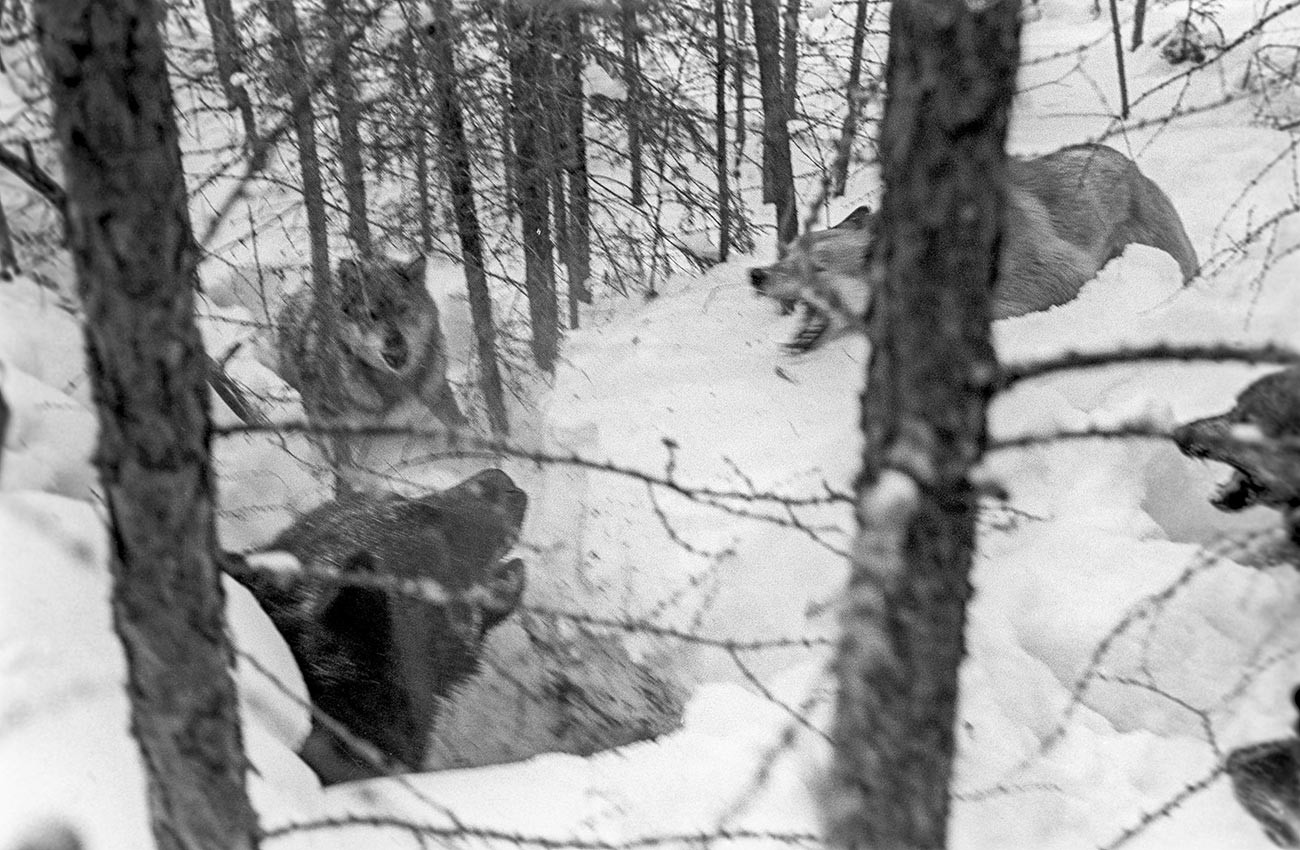 A bear being driven out of his den with dogs' help. Krasnoyarsk region, Russia.

Dogs can be helpful in hunting a bear both from his den and in the open forest. In the first case, they wake up the bear in his and irritate him with barking. The bear then digs out of his den, which is closed with a thick stopper made out of grass, moss, and soil. As he opens the stopper, the dogs tear at the bear while the hunter attacks him with a spear or a firearm.

Hunting a bear in the open, dogs follow his trail and will hold the bear until the hunter arrives. Russian laikas are the best dogs for this dangerous affair. But there must be several dogs – they can’t damage the bear considerably, while the bear can kill a laika with one blow. So the dogs take turns attacking, inflicting painful bites. The bear then sits down to protect his pelvis, and becomes a steady aim for the hunter. 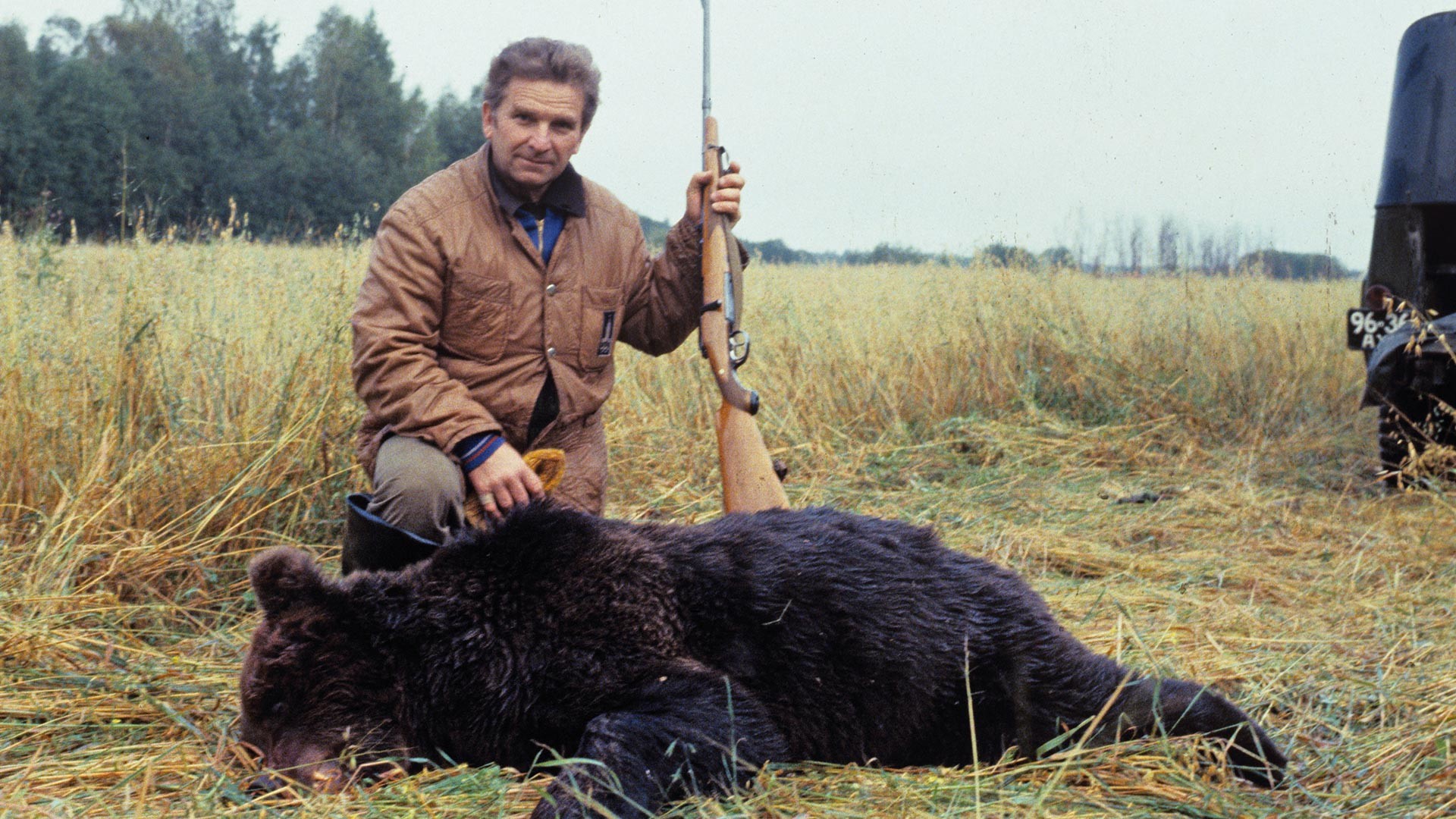 Obviously, in each of the previous cases, a firearm can be used to kill a trapped bear or a bear eating oats. However, the most complicated (except for rogatina, of course!) way of hunting a bear in the wild is hunting him with just a rifle.

The hunter moves through the forest across the bear feeding areas. When he finds the bear, he approaches it as close as possible and makes an accurate shot at it. The hunter must move really silently – hearing a crack in the forest, a bear can tell if it was a human foot or an animal paw that made it. And his reactions are immediate. 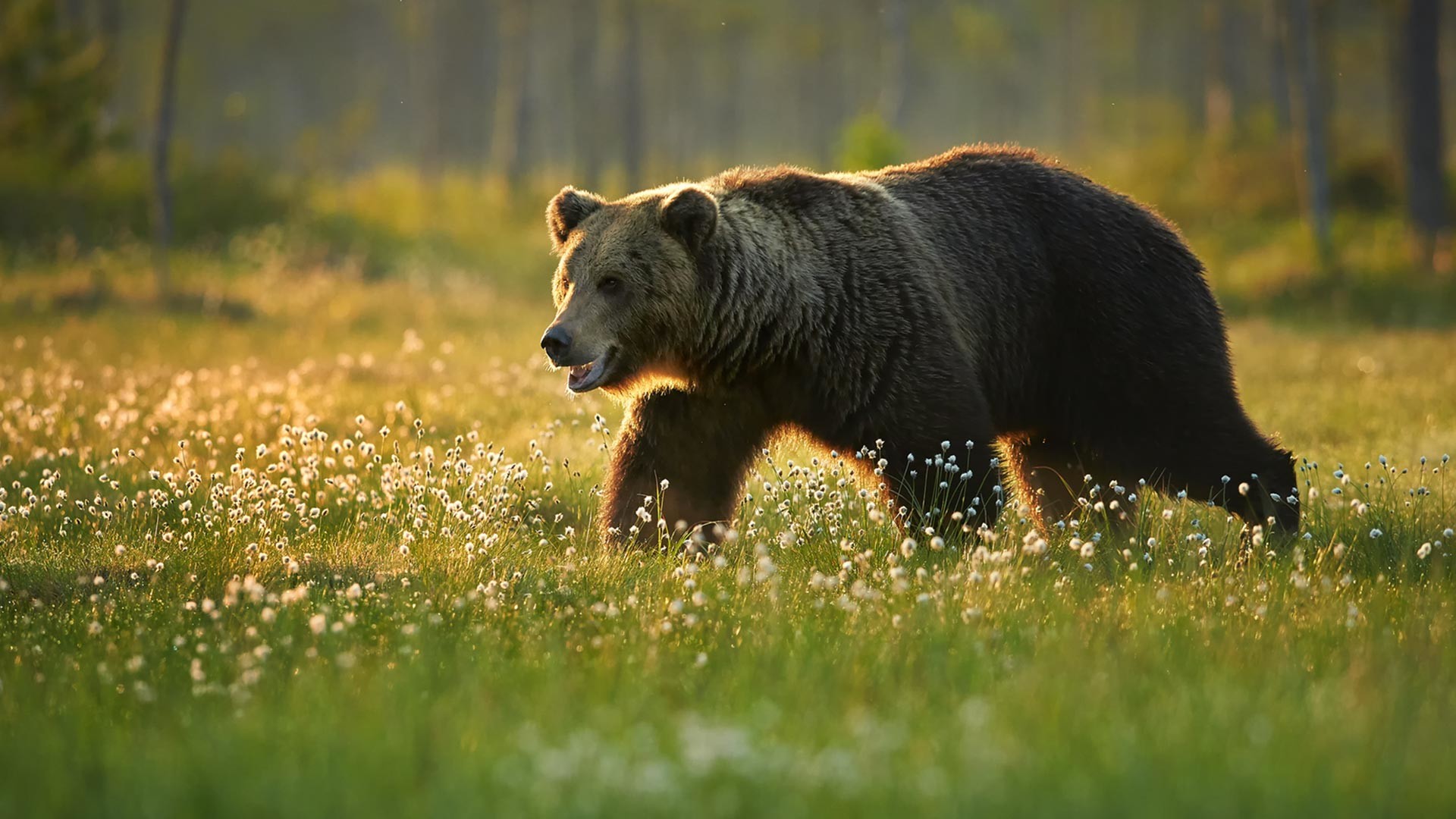 A young brown bear in the wild.

A hunter on a Russian message board tells a story of a bear hunt gone wrong. His friend Andrey noticed an average 150kg bear feeding on forest berries – in about 30-40 meters. After waiting for the beast to offer him a side, Andrey fired a bullet to the heart area. “Even at the moment of the shot, he knew something had gone wrong. The bear only barked loudly, instantly turned around and rushed at the hunter. A second later Andrey was knocked down by the huge force of the bear's paw.”

Luckily, the hunter managed to survive by playing dead. Bears usually don’t eat their prey right away, but hide it under the leaves so it rots a bit. After the bear covered Andrey with leaves and brushwood and left, the wounded hunter managed to crawl out and stumble homewards. “Three broken ribs, torn thigh and mangled back were the outcome of this hunt,” the storyteller concludes. “He barely survived.” So, a standoff against the Master of the forest sometimes can end with the Master winning!

In the 20th century in the USSR, bear hunting wasn’t regulated by any special laws except for the general laws on hunting. The decree of the Council of the People’s Commissars “On Hunting” (July 20, 1920) and the next law “Regulations on hunting and hunting economy of the RSFSR” (October 10, 1960) stated that the hunter must be at least 18 and have a regulated license. The license was given out to those who “passed tests on the rules of hunting, safety during hunting, handling of hunting firearms and have paid a state fee,” the 1960 law said.

Currently in Russia, things are the same – to hunt, you should have a license and your hunting firearm (if you use one) should be registered. There are certain regional norms for bear hunting. In the Perm region, for example, you can hunt bears from April 1 to May 30. In Kostroma – from April 5 to May 15, and then from August 1 to November 30. These terms depend on the local population count and mating seasons for brown bears. In some regions, bear hunting is banned temporarily because of the low population count.

A family of Russians has learned how it is to live with a bear. While in some regions, bears really walk the streets – and it’s not because they’re feeling fine.