How bears really walked the streets in Russia 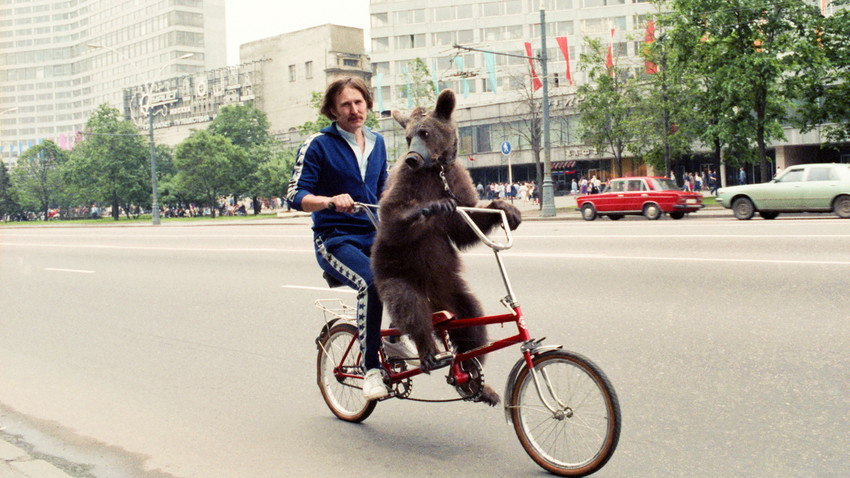 Nikolay Zobov, a circus performer with his bear in Moscow on June 22, 1969

Yuri Lizunov, Alexander Chumichev/TASS
It’s not only a funny stereotype – in Russia, encountering a bear on the city street was a mundane thing not long ago. How could this be possible and how did it come to an end?

On July 1, 1771, Sankt-Petersburgskie Vedomosti, the imperial capital’s most popular newspaper, reported that two peasants from the region of Nizhny Novgorod (700 miles from St. Petersburg) brought two big bears to town to perform 22 different tricks that included imitating judges in court, country girls looking at the mirror and hiding their faces from boys, a mother cooking bliny and feeding her son, and soldiers marching with sticks instead of rifles. 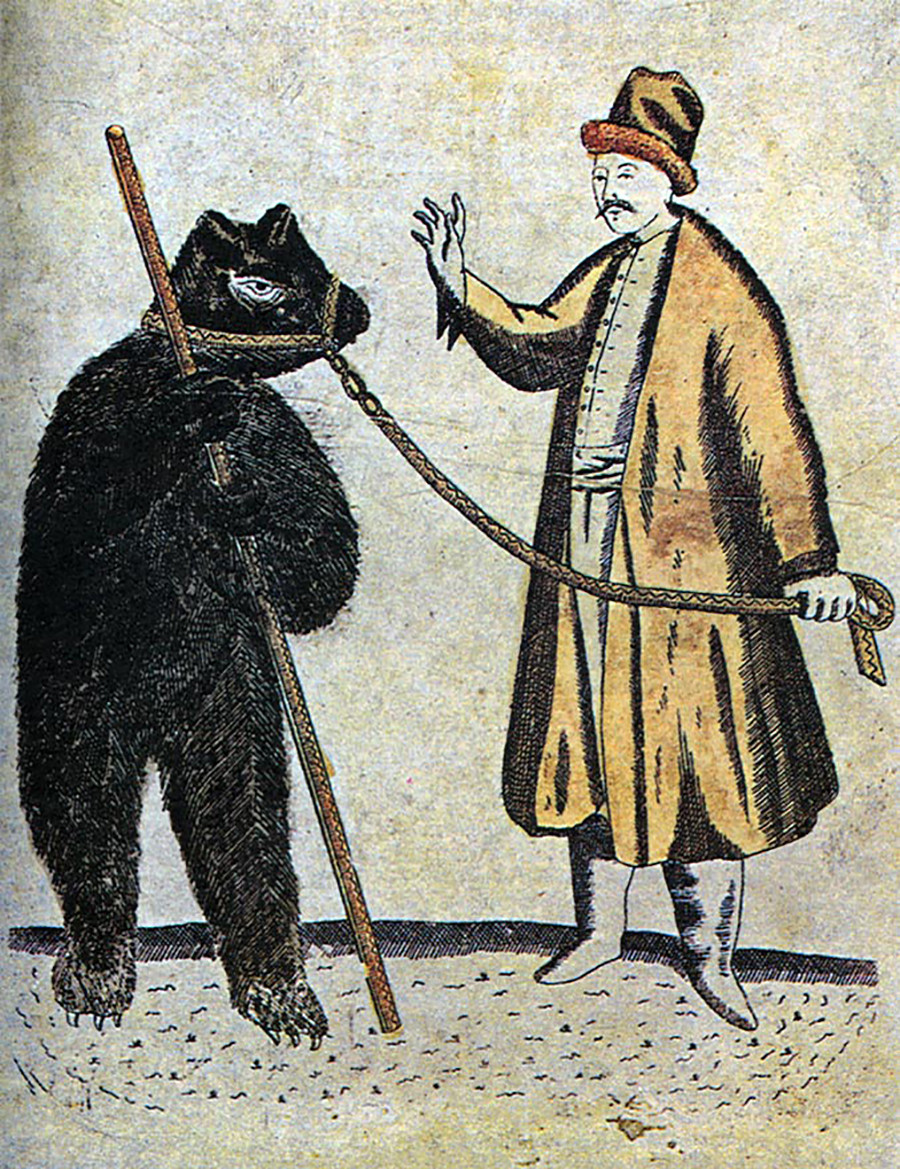 A bearwalker and his bear, 19th century

Bears also could pick gunpowder from their eyes with their claws but very carefully, or pick chewing tobacco from behind the bearwalker’s cheek. Bears also gave their paws to anyone to hold, and if offered a glass of wine or beer, they drank it and thanked the giver with a graceful bow. What a sight that was!

“During each joke, the bear’s master tells peculiar and funny rhymes… The show would have been much less entertaining, had these wild and formerly untameable beasts been deprived of their natural weapons… On the contrary, their paws are not cut off, and their teeth are not torn out, as it is usually done in such cases.”

Popularity of bear shows was enormous. Two peasants could buy an ad in the nation’s most read newspaper? That means they profited greatly from the shows.

Bear that unites a Tsar and a peasant 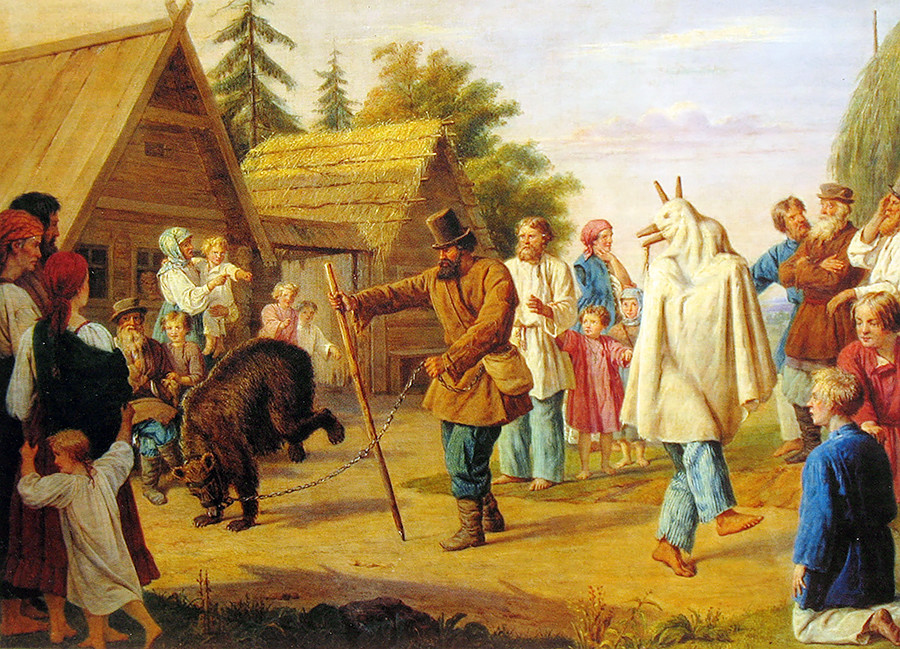 The skomorokhs in a country village

Russian historians point out with zest, that in medieval Russia a Tsar’s son could easily play games with a peasant’s son, because the games were roughly the same. This is totally true when speaking of bear games – they were enjoyed by both villagers and towners, noblemen and paupers. At the Tsar’s court, there were specially groomed, expensive bears, kept in menagerie. For simple folks, a chance to see a bear show came when a traveling bear trainer came about.

There was no profit in showing untrained bears, as in the zoo. The tradition of Russian bear training had been developed well before 17th century by traveling Russian jokers called skomorokhs.

Half-a-year old bear cubs were caught in the wild and taught to copy simplest man’s actions. Each action is called upon with a certain rhyme or singsong that the bear recognizes - and that’s why bearwalkers always sung and rhymed during the shows.

Bearwalkers usually traveled with a fiddler and drummer who helped gather the folk for the shows. Bearwalkers walked roughly for half a year, during summers. Let’s count their profits! 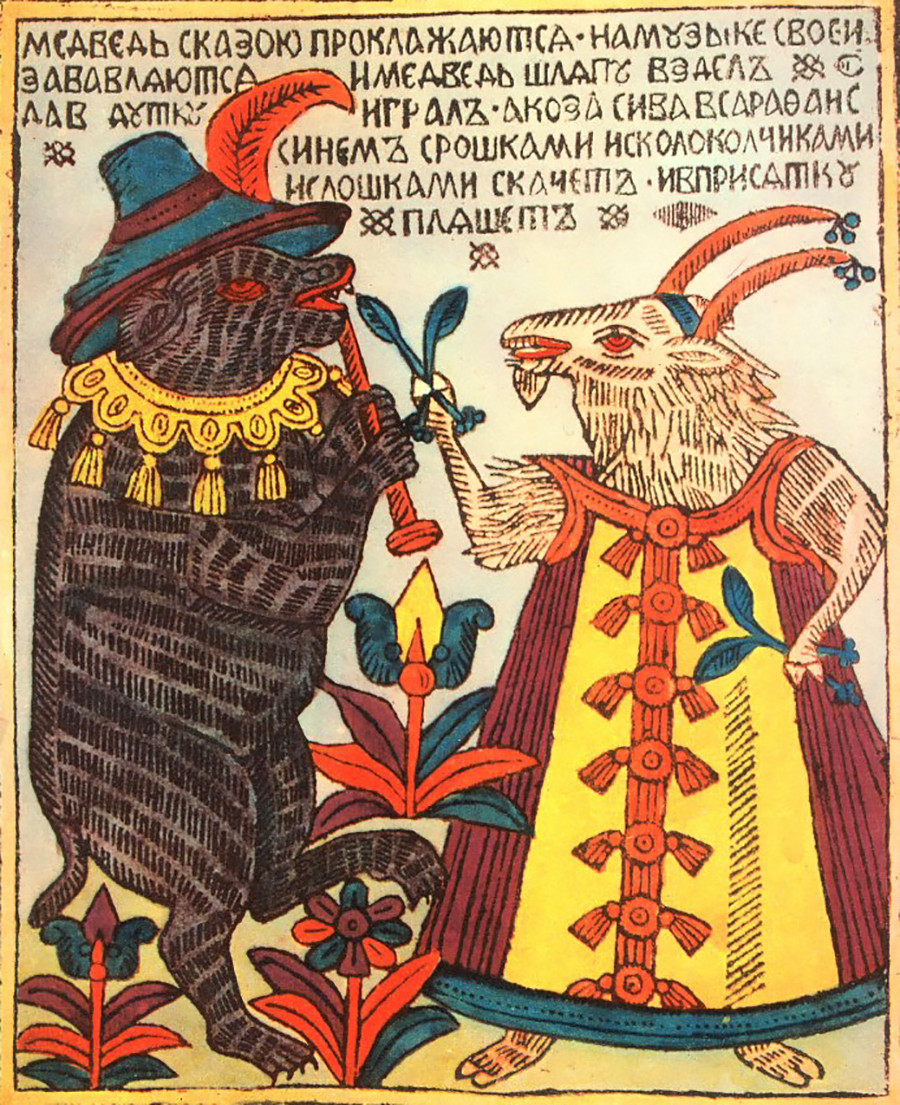 "A bear and a goat are chilling – entertaining themselves with their music. Bear is wearing a hat and plays a pipe, while the goat in a gown, with bells and spoons is dancing," From Russian loubok of 18th century.

Some peasants didn’t want to train bears themselves – they just bought a trained one for 40 roubles. For comparison, a young ram costed 8 roubles, a countryside attorney earned 20 roubles a month, a hat costed 2 roubles, and so on). 1,5 rouble bought you a drum, 3 roubles a fiddle, 1,5 roubles went for a chain and a bridle, 0.80 roubles went for passports for each of 3 peasants – and you’re all set with the trade that can last up to 10 years (before the bear gets old and tired).

During a season, bearwalkers earned about 130 roubles and also got paid in clothes and food. About 25 roubles went to feed the bear for 7 months – same as for three people with him. In the end, the bearwalkers were left with only about 70-80 roubles. Half of them went to the bear owner, and half was divided between fiddler and drummer. In the end, the bearwalker was left with approximately 40 roubles for a 7-month hard work. Not very much, but enough for a peasant to make ends meet. 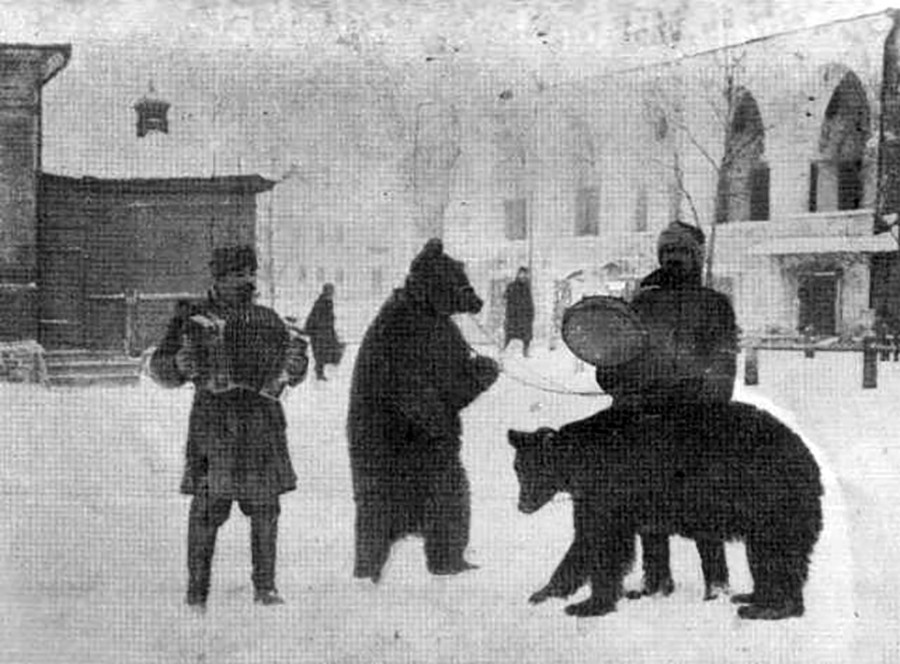 But there were ways to earn even more – using a little wit and the fact that among Russians, bears are believed to have supernatural powers – they can expel hostile spirits – domovoys – from barnes and izbas. Coming to a village, bearwalker makes sure to tell a lot of scary stories about mean domovoys destroying homes of unfortunate peasants.

Soon, a concerned home owner approached the bearwalker, asking him to perform the bear rite over his house. As the bear approached the asker’s house, bearwalker discreetly pulled a small thread tied to a ring in the bear’s lip, and the poor animal backed down in pain and with deafening roar – which to onlookers seemed like he’d sensed the evil spirit. Bearwalker, suddenly very grimly, said that there is a powerful evil domovoy in the house, and he can be quieted only with powerful spells – for which, he and his bear must be paid very handsomely. Having received the pay, bearwalker slowly relaxed the bear, went with him all over the yard and house – easy money!

This treatment is unbearable

Luckily, there were some people who saw ‘bear games’ for what they were – appalling torturing of animals. In 1865, a former army officer, Chamberlain of the Imperial Court Pyotr Zhukovsky founded Russian Society of Animal Protection. It consisted of just 50 people, who managed to promote an official ban on cockfights, open an animal care center and, importantly, to put a ban on bearwalking.

The Ministry of Internal Affairs acknowledged that bearwalking is not only torture of animals, it also encourages bearwalkers not to work for almost half a year, drinking and being a social parasite. In 1867, bearwalking has been declared an offense. Sadly, for only 50 years or so. 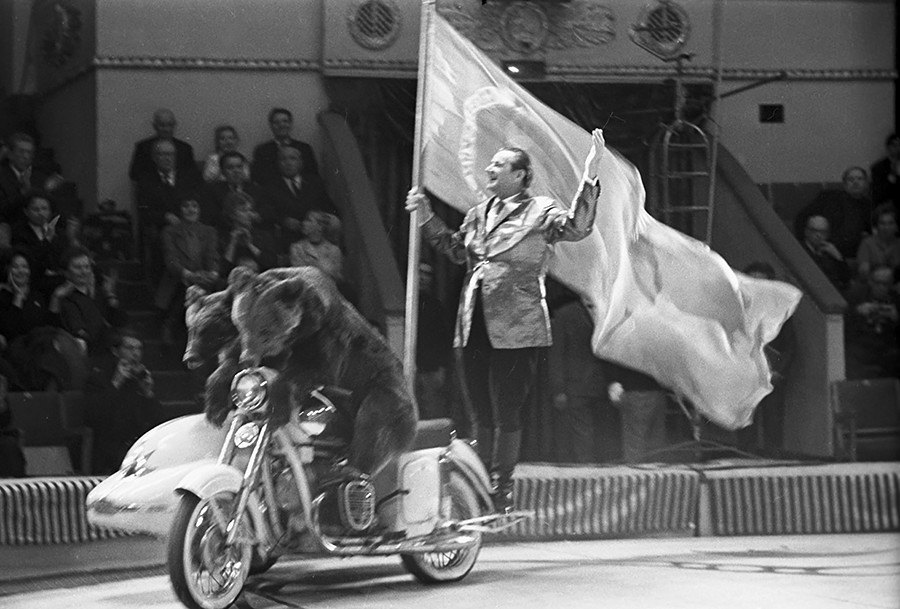 Valentin Filatov with trained bears during a show at the gala evening dedicated to the 50th anniversary of the Soviet circus. The Moscow Circus on Tsvetnoy Boulevard. 1969

6 years after the ban on bearwalking, Ivan Filatov was born. He became a famous lion trainer, traveling with his circus all over Russia (there was no ban on lion performances). His son Valentin inherited his father’s craft and in 1940s founded the show called “Bear Circus”. Soviet state saw circuses as important means of people entertainment and encouraged these shows. Filatov and his bears traveled in Soviet union and abroad – the bear nightmare was on again, and worse, because now, bears had to ride motorbikes.

What the onlookers didn’t know is what happened to the bears when they retired..

“In our country, there is no system of retirement for animals from circuses and zoos who have already lived through their best years. ‘Mosfilm’ movie studio has some kind of ‘animal shelter’. The problem is that from these shelters, the animals go to become dumplings. Or a hide to cover the floor,” – Karen Dallakyan, a veterinary and animal rights activist, says. 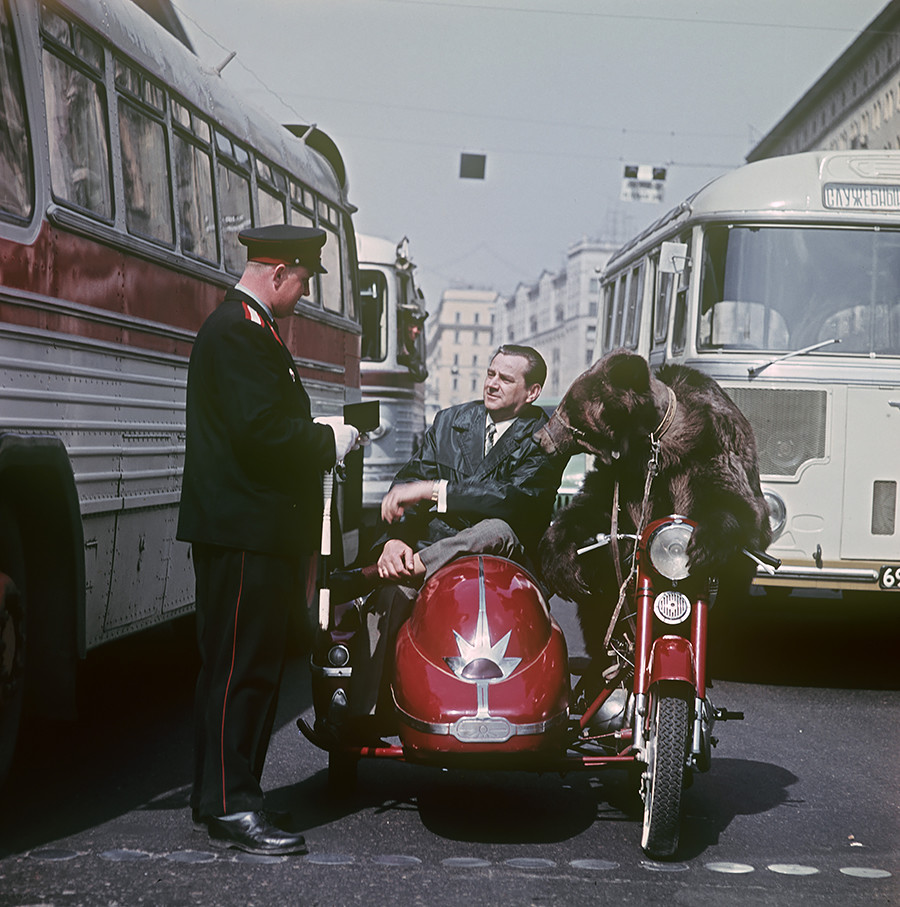 The retired bears are left to the mercy of their former trainers – if they are kind-hearted people, then their bears have good prospects to live the rest of their lives in decent conditions.

Honored Artist of Russian Federation, animal trainer Pavel Kudrya is one of those people who do care. After his number with bears Egor and Raya went out of repertoire at the circus administration’s order, he keeps and feeds his brown colleagues at his own expense at a friend’s country farm, while because of the red tape “Rosgostsirk” (the state-funded organization supervising circuses) won’t acknowledge the fact that the bears have been working in the industry for many years.

There are more positive examples – the famous Stepan, who lives with a Russian family of animal trainers, works as an actor and a model, or Masha, mascot bear of Yaroslavl (155 miles north of Moscow), who enjoys a life of local animal celebrity.

However, the retirement of circus animals is still a big problem in Russia. There is a law against cruelty to animals in effect – but having bear circuses somehow isn’t considered cruelty. Also, since June 27th 2018, buying and selling rare and endangered animals (that are listed in the Red Data Book of Russia or protected by international treaties) has become a criminal offense in Russia. So we’re gravitating towards more ethical treatment of animals – and bears, too.