4 Russian dogs that were bred to hunt bears and wolves 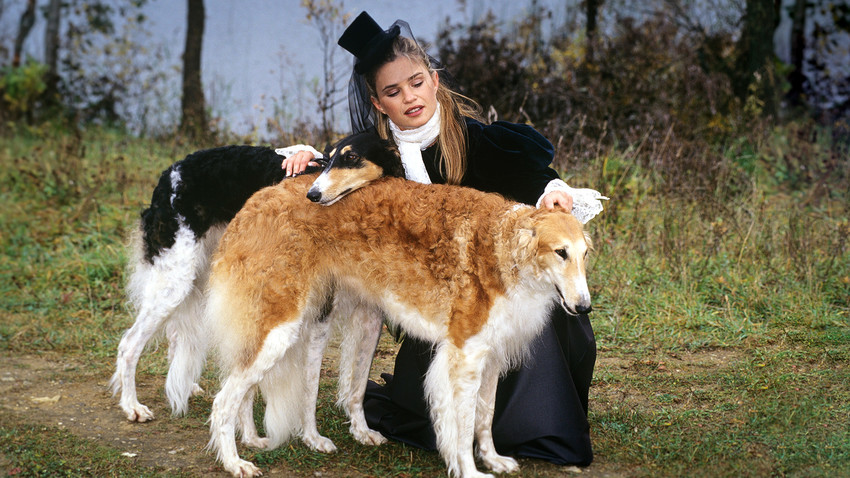 Yuryi Abramochkin/Sputnik
Hunting with dogs was a favorite and very expensive pastime of the Russian nobility. Some dogs could help to hunt very large forest animals, and one hunting dog was so famous that it even earned mention by Leo Tolstoy

“‘Halloo!’ Nikolai shouted in a voice not his own, and of itself his good horse raced headlong down the hill, leaping over gullies, to head off the wolf; and still more quickly, outstripping the horse, raced the dogs. Nikolai did not hear his own shouts, did not feel that he was galloping, did not see the dogs or the space over which he was galloping; he saw only the wolf who, quickening his pace, loped down the hollow without changing direction.”

This is how Leo Tolstoy describes a Russian dog hunt in “War and Peace.” This type of hunting first appeared probably in Arab countries and came to the Russian lands after the Tatar yoke. Many Tatar and Uzbek khans moved to Russia, and by the 17th century they had bred the borzoi – the main breed of domesticated dog used for this kind of hunt.

Since then, dog hunting became a favorite pastime for the tsars and the nobility. Dog hunting especially flourished after 1762, when the government gave the nobles the opportunity to skip state service, which was imposed on them by Peter the Great. Many nobles decided to stay in their country manors, and to improve agriculture and cattle breeding they needed to destroy the abundant wolves in Russian forests. Hunting with dogs was the best way to solve the problem.

Owning hunting dogs, and employing people to train them and take them hunting, was very expensive. As of the mid-19th century, it cost approximately 1,500 rubles a year – half of an army colonel’s annual pay.

So what are the main Russian breeds that hunt wolves or even bears? 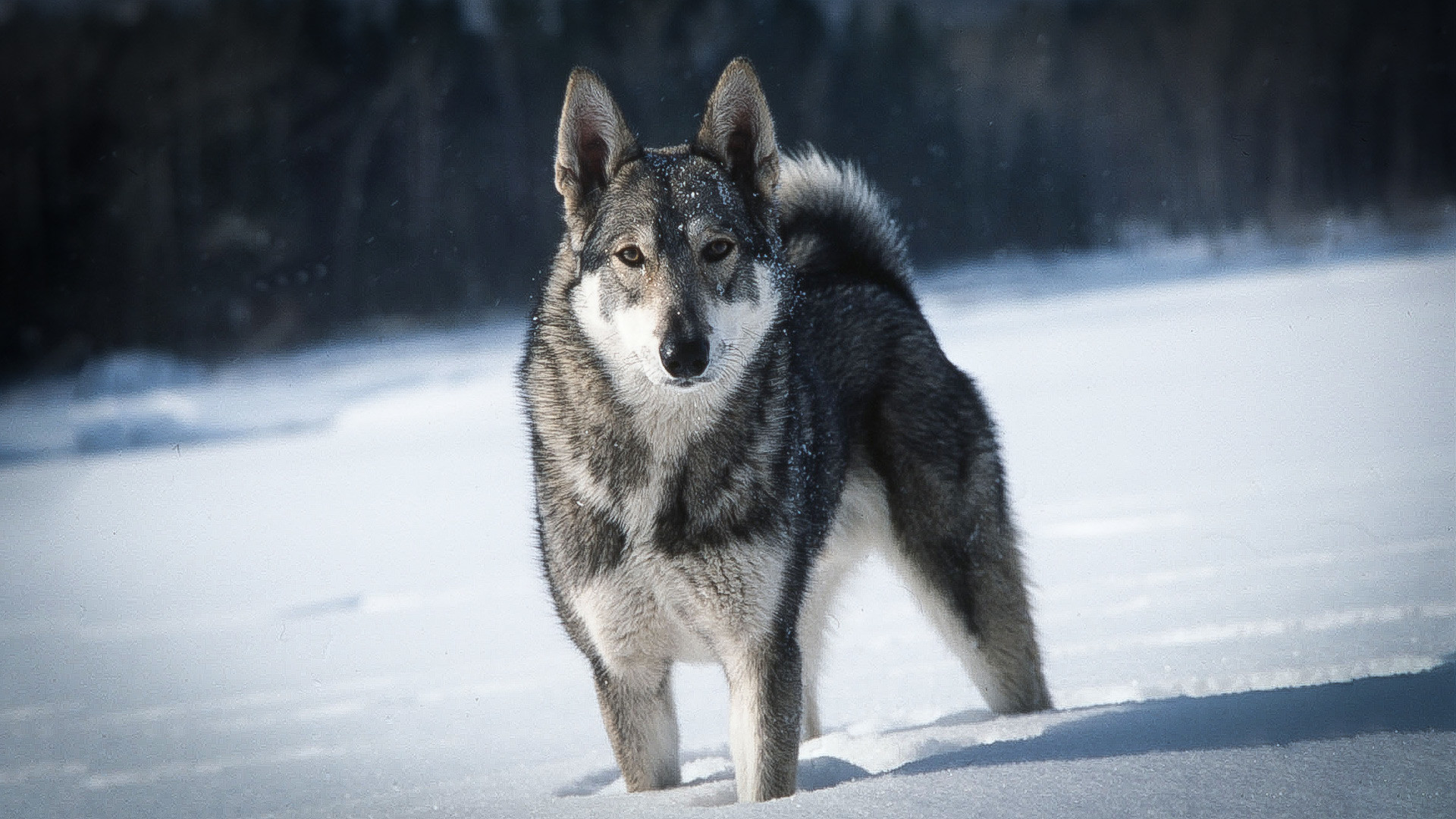 Laika (husky) is a versatile hunting dog native to Russia. They are used to hunt moose, boars, beavers, forest birds, and ducks. After discovering the prey, the laika harasses them with barking and doesn’t let them go until the hunter approaches to kill the prey. If the prey tries to flee, the laika chases it silently.

Laikas are famous for their sense of smell, speed and persistence in chasing prey. They can even chase bears – they are brave, angry, have a firm grip and are very cunning. Laikas are also trained to bring the smaller dead prey – such as birds and ducks – to their master. 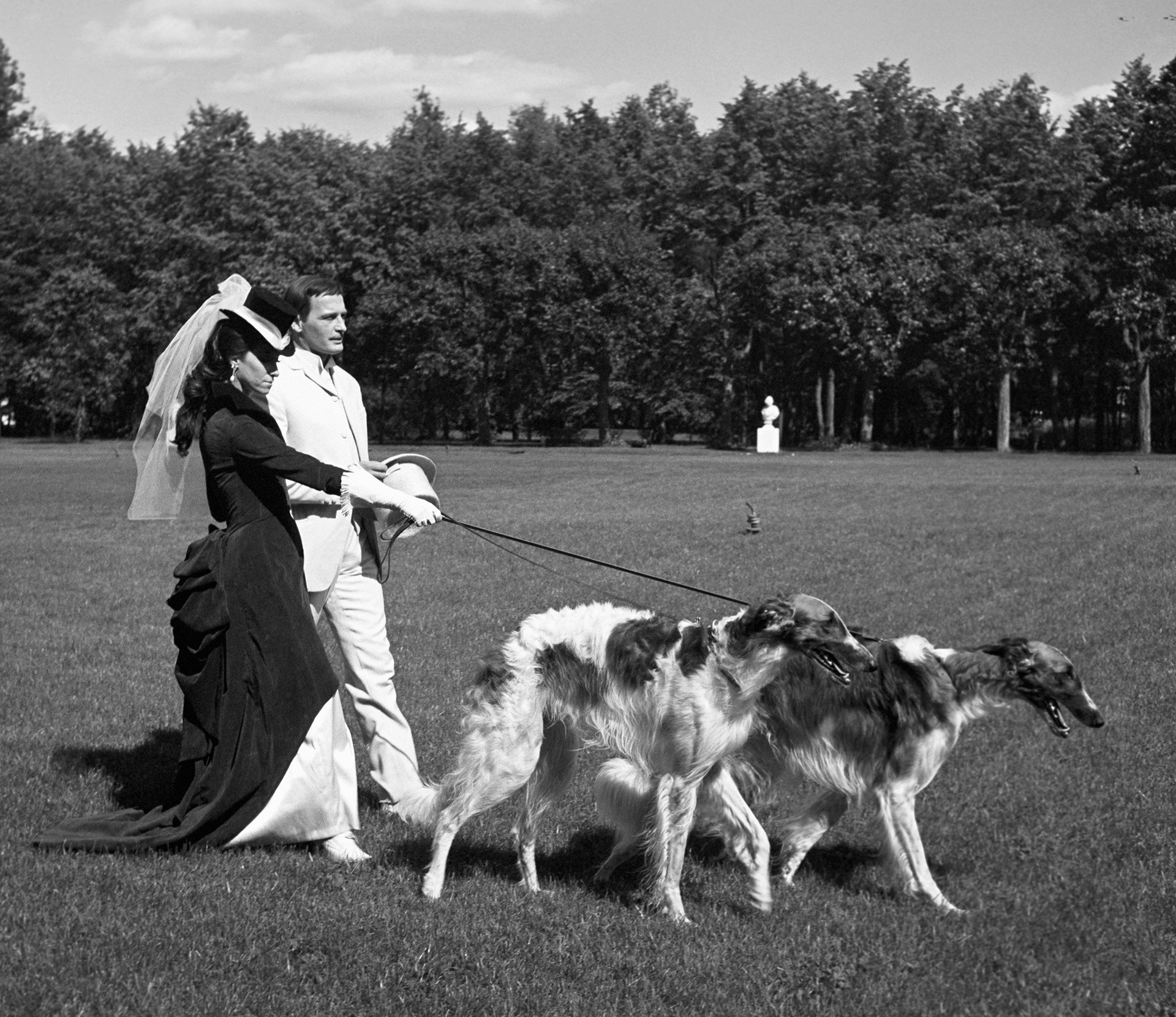 Borzoi hounds are believed to have been bred in the 17th century from saluki (Persian borzoi) and Russian laikas. The Russian borzoi is paramount for the dog hunt – they can actually overrun the prey, just like the laika, but they are much faster. Unlike saluki, who chase their prey over long distances in the steppe, the Russian borzoi has been bred to get the prey on short distances, in forest glades, before the prey reaches the forest.

Their main assets are keen eyesight (they always keep their eye on the prey), rage and anger during the chase, high speed and an ability to leap, as well as persistence and teamwork.

Let’s go back to Tolstoy: “The old dog, his matted fur hanging from his haunches, headed off the wolf, and was now within five paces of him. The wolf, as if sensing the danger, gave Karai a sidelong glance, tucked his tail still further between his legs, and increased his pace. But here – Nikolai only saw that something happened with Karai – he was instantly on top of the wolf and rolled head over heels with him into a ditch in front of them.”

In this excerpt, Karai, a borzoi, did his famous leap. By the way, this dog in “War and Peace” is modeled after a real-life dog named The Beast, who lived in the late 18th century and was famous for his ability to capture a bear on its own.

Nikolay Leskov wrote in one of his stories: “In his hunt, there were special dogs that could take a bear. They were called ‘leeches’. They gripped the beast so nobody could tear them off. It happened that the bear who’s been gripped by a ‘leech’ killed it with a hit of his monstrous paw or just tore the dog in two – but nobody has seen a ‘leech’ fall off the beast alive.” 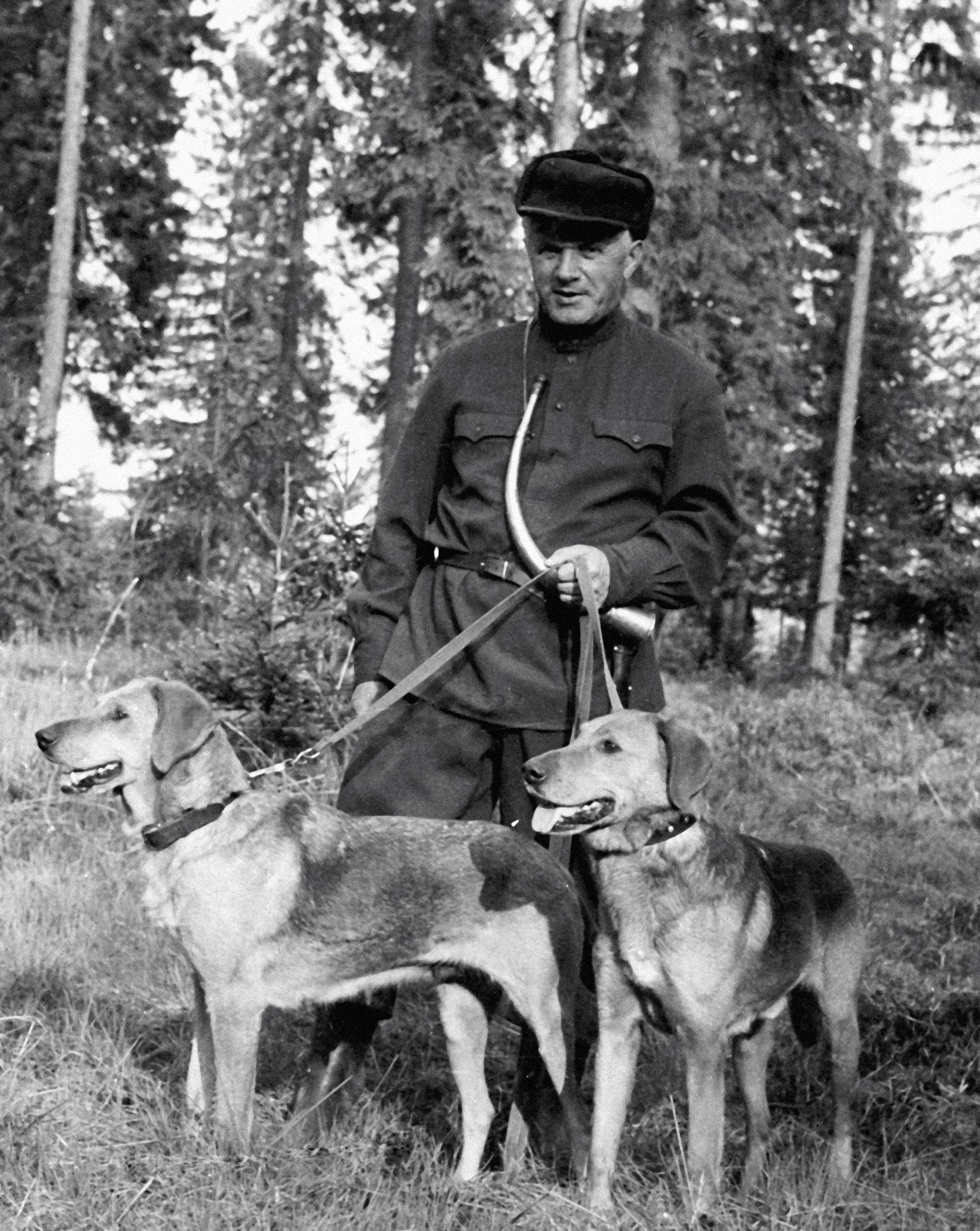 A hunter with his dogs – Russian hounds named Shugay and Kopeika

If the prey (wolf, a deer or a hare) made it back to the forest, a borzoi had no chance to catch it – the fast dog would smash itself dead against the trees, and borzoi dogs were very expensive, so hounds were used to hunt in the woods.

In a dog hunt, hounds would chase the prey and make it run in the direction of an open space where borzoi dogs would then chase it and hunters shoot it from a distance.

After hounds found the beast’s trail, they’d chase it until reaching the hunter, all the while signaling their location with barking. Usually, hounds were tied with special contraptions to form pairs. They were trained to chase prey as a pack and not let it go under any circumstances. 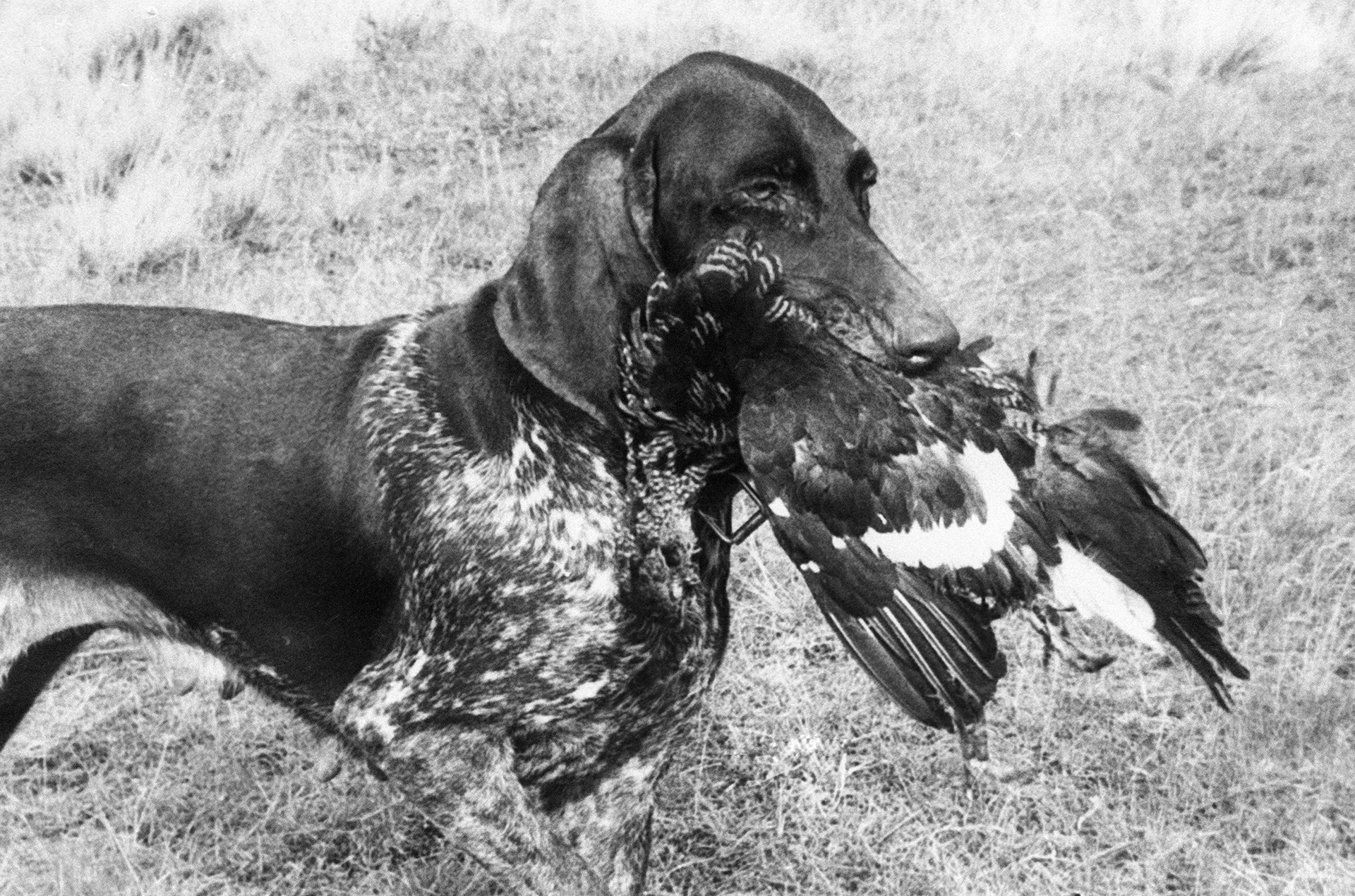 German shorthaired pointer with his catch

Pointer dogs were used to hunt forest, field and swamp birds. Pointers were often the only dogs owned by poor Russian noblemen who couldn’t afford big hunting parties with borzoi and hounds.

Pointers used their sense of smell to locate a bird, and then at a distance where the bird couldn’t see or hear it, the dog stopped, waiting for the hunter to approach. As he closes in, the dog leaps forward and scares the bird just in time for when the hunter is ready to shoot. After this, the dog fetches the dead bird.