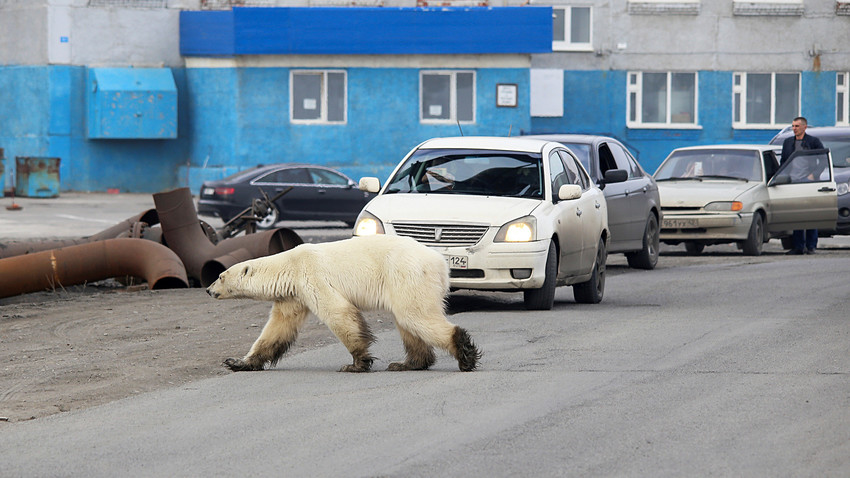 Reuters
If you make fun of those who believe that there are bears walking the streets in Russia, you may not be quite so amused when you read this.

Sometimes, when urban life expands, wildlife and human life can cross paths. So, what animals can be spotted in Russian cities and towns?

The saber-toothed deer is a very rare species. Siberian musk deer are even listed in the Russian Red Book of endangered species. But in Yuzhno-Sakhalinsk (in Russia’s Far East), locals occasionally come across musk deer right in the city. This video shows a saber-toothed deer that must have got lost after leaving the forest in the distance.

At night, drivers need to be extra careful not to run down musk deer that accidentally wander out of the forest and right onto the road.

One might wonder how American raccoons could make their way to the Caucasus? And yet, in the resort town of Sochi, every now and then, there are reports of wild raccoons climbing into people's houses and rummaging through garbage bins in search of something delicious to eat. It turns out they were brought here back in the 1920s to boost the variety of the local fauna. And they liked it here. People are not afraid of them - on the contrary, if they see a raccoon stuck in a tree, they are always in a hurry to help, well, because raccoons are so cute!

A little known fact about Caucasus raccoons is that they operate in a ‘mafia’ that often visits locals and takes all their food, down to the last crumb!

One would think that wild arctic foxes would prefer to be away from noisy roads and cars. But no, sometimes they crave human company. In Russia, there’s an expression - "pesets [eng. ‘Arctic fox’] has come" – which means you’re finished with doing something - and you can see why. Residents of Norilsk filmed a pack of hungry Arctic foxes running around the city in panic. Often, these animals can carry rabies, so it is best not to get in contact with them. But due to their cuddly appearance, people can’t help themselves. After all: "Aren't they cute!"

Another video shows an arctic fox fearlessly coming up to a fisherman - despite being shooed away repeatedly - and trying to steal a fish the man had caught. "How can you be so cheeky?" The man keeps asking the fox, until he gives up and lets it have the fish.

It turns out that wild animals not only be spotted in remote towns, but in megacities like Moscow, too. The city has many forests and parks, where they often find a place to live. Some of them are not averse to getting to know humans better: after all, people often have something delicious to eat and are usually prepared to share!

In Kuzminki park, southeast of the city, people often see foxes roaming the paths, minding their own business.

Sometimes foxes even run out onto roads – so, again, drivers need to be extra careful not to run them down. You might even get a photo/video opportunity!

There are many moose living in Russian forests, who, from time to time, run out onto roads. They sometimes even wander into suburbs. In St. Petersburg, local residents often spot moose wandering around the suburb of Murino.

The town of Tynda in the Amur Region is surrounded by forests, and bears are a fairly common sight in its streets.

When they cannot find food, bears go to the outskirts of the town to the sewage treatment plant and, according to the locals, even wander around people's summer houses and kitchen gardens. Wildlife wardens usually drive the bears back into the forest. But unfortunately, sometimes, they have to shoot them, if there is a real threat to human life.

For example, in July 2018, CCTV cameras at a railway station captured a bear chasing an employee. Footage like this gives you goosebumps!

Once you leave the town, you come across bears just running along the road. But beware, momma bears are super protective of their cubs!

From time to time, fearless idiots even feed biscuits to bears.

Polar bears are frequent guests in Russia’s northern cities. They live in the Arkhangelsk Region, as well as in Chukotka and Yakutia. In February 2019, the Novaya Zemlya archipelago even declared an emergency situation over polar bears climbing into apartment blocks at night!