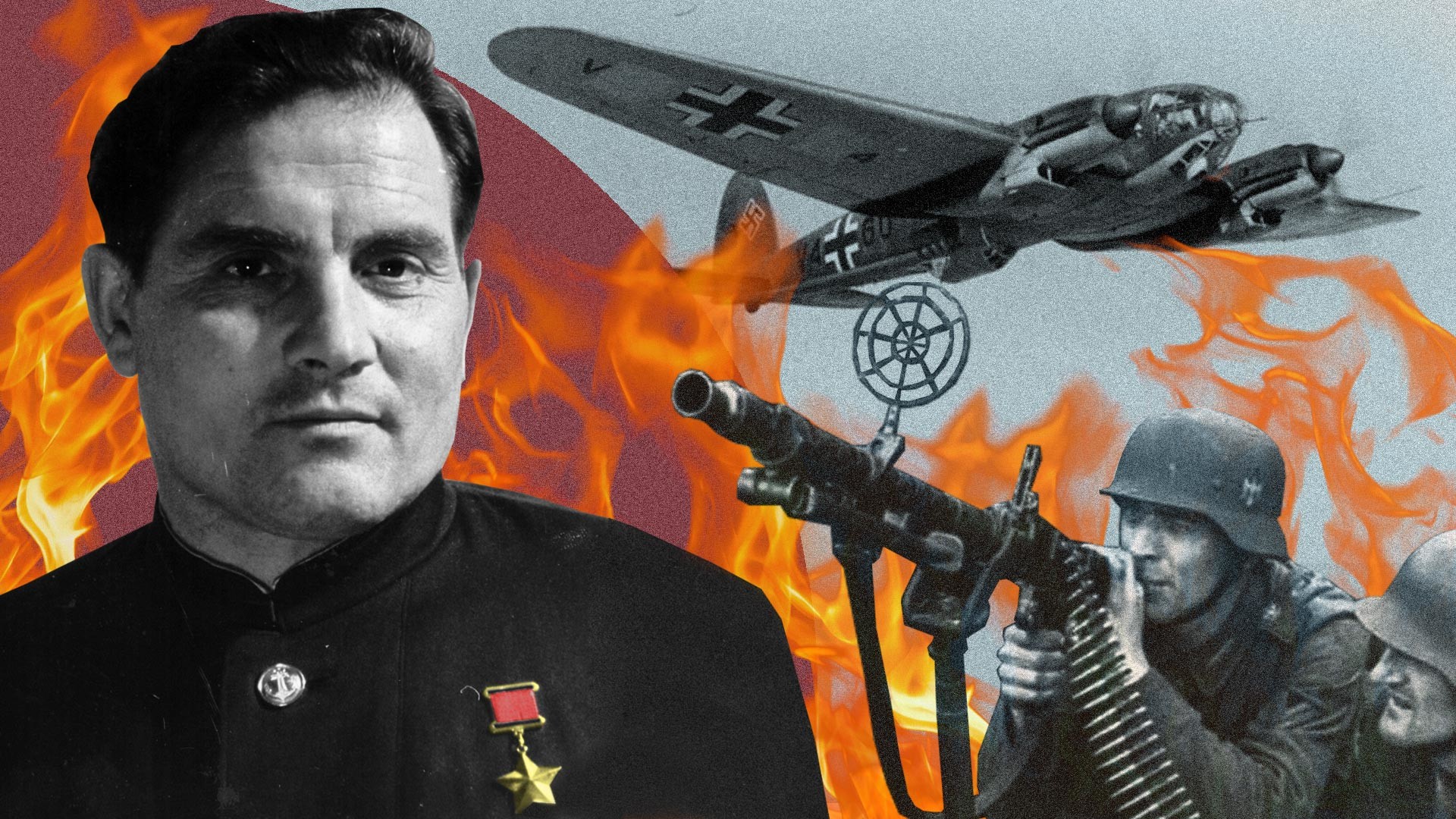 Kira Lisitskaya (Photo: Archive photo; Bundesarchiv; Freepik)
When Mikhail Devyatayev seized a bomber from a German airfield, he couldn’t imagine the great service he was doing to the Soviet Union’s defense capability.

A blockbuster movie about one of the most daring escapes from a Nazi concentration camp during World War II was released on April 29, 2021. V-2. Escape from Hell by prominent Russian director Timur Bekmambetov (Wanted, Abraham Lincoln: Vampire Hunter, Ben-Hur) tells the incredible story of Mikhail Devyatayev, who managed to escape from German captivity in a hijacked bomber. 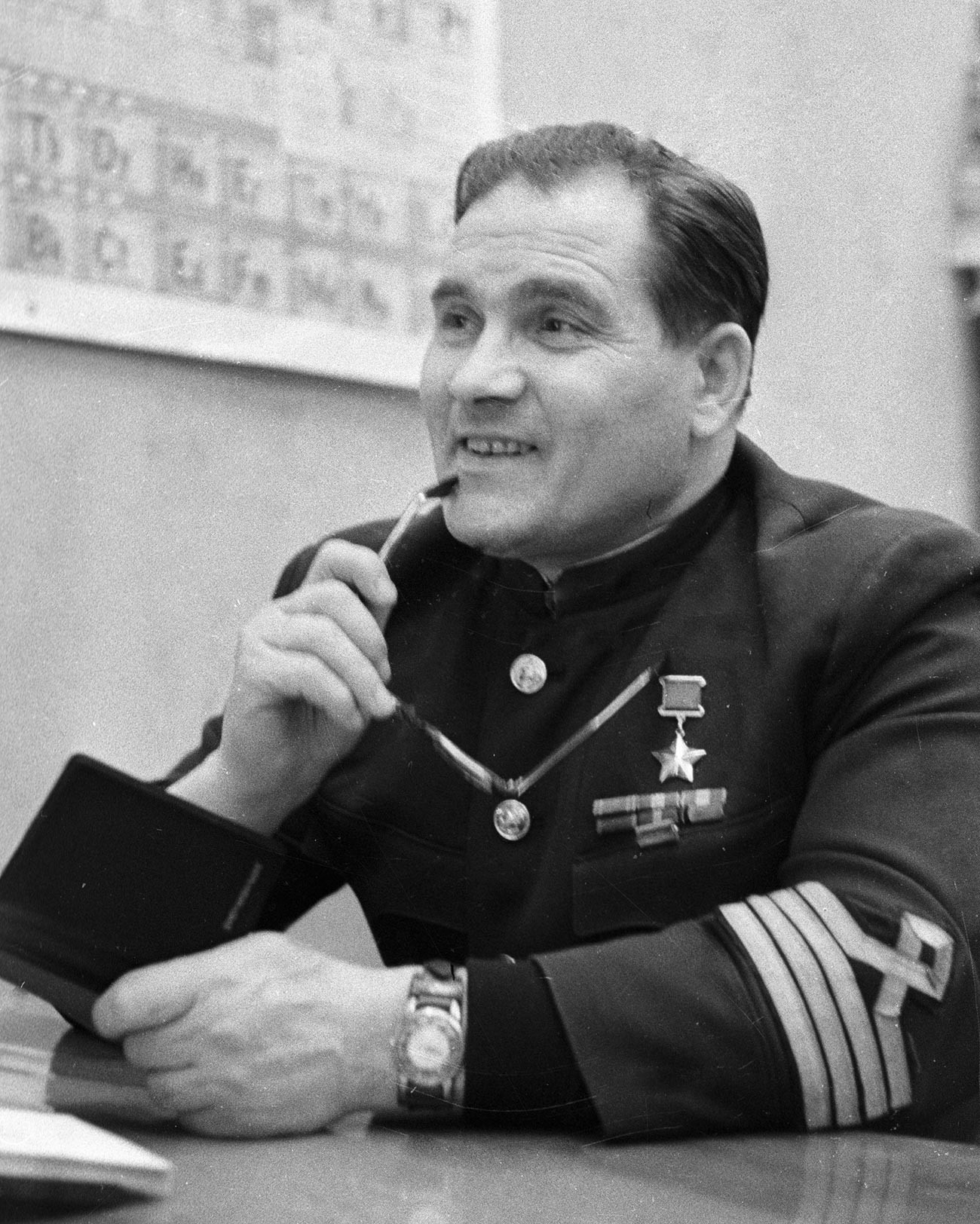 A senior Lieutenant of a guards fighter aviation regiment, Devyatayev was captured by the Germans on July 13, 1944. His fighter plane had been shot down near Lvov in Western Ukraine. On bailing out, the pilot hit a wing panel and it was a miracle that he survived at all.

Mikhail Petrovich refused to cooperate with the Nazis and made an attempt to escape from his POW camp in Poland. His tunnel was discovered, however, and the pilot was condemned to death. He was subsequently transferred to Sachsenhausen concentration camp, where he was to be executed.

However, Devyatayev was saved from imminent execution by the camp’s barber. When the pilot was having his hair cut, one of the prisoners waiting in the corridor lit a cigarette and was immediately beaten to death by guards. Without hesitating for a second, the barber removed the number tag from the dead man and replaced it with Mikhail’s. Thus, the “Devyatayev” who had been condemned to death was cremated in the furnace of the camp crematorium, while former teacher Grigory Nikitenko started a new life in Sachsenhausen. 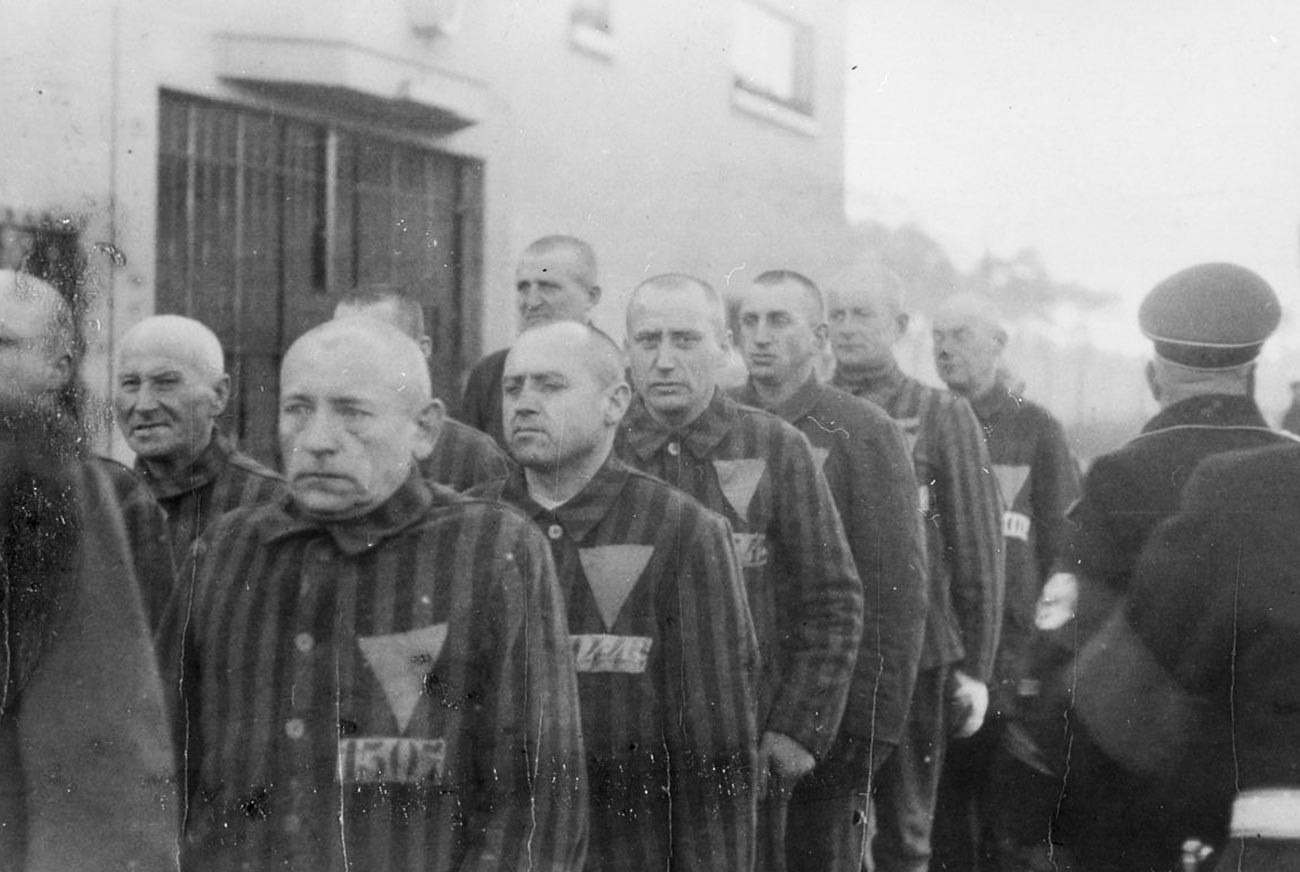 Prisoners of the Sachsenhausen concentration camp.

At the secret test site

Soon “Nikitenko” was to change his place of captivity once again. He was transferred to a camp on the Island of Usedom in the Baltic Sea. Peenemünde, a secret German test site, was located here. The Third Reich’s “wonder weapons” were being developed at the site, including the first jet planes, the V-1 cruise missile and the V-2 ballistic rocket.

Devyatayev, who was physically strong, was selected for work on the test site: moving equipment and materials and clearing unexploded bombs dropped by Allied aircraft. A Soviet pilot would never have been allowed anywhere near the airfield and its aircraft, but nobody feared ordinary teacher Nikitenko.

Mikhail Devyatayev decided to make another attempt to escape and found nine other like-minded people among the prisoners working at Peenemünde. They agreed to try to escape by air and singled out a particular aircraft for this purpose - a Heinkel He 111 bomber.

“We took the decision some time in early January 1945 and from that moment we referred to the bomber by no other name than ‘our Heinkel’,” Devyatayev recalled in his memoirs Polyot k solntsu (‘Flight to the Sun’). “The aircraft was in active service for the Germans and they looked after it, but it was already ours, because we didn’t take our eyes off it, we thought about it and talked about it and all our emotions and hopes were fixed on it. In my own imagination, I had already started its engines more than once, taxied down the runway and taken off, soaring above the clouds; I had already navigated the flight and landed on home soil in this broad-winged foreign aircraft with its long bulbous-bellied fuselage, which I hadn’t even come close to yet.”

Devyatayev was the sole member of the entire group who had any experience in flying. He took every opportunity to get close to the plane and, if he was lucky, to go inside and glance at its instrument panel. 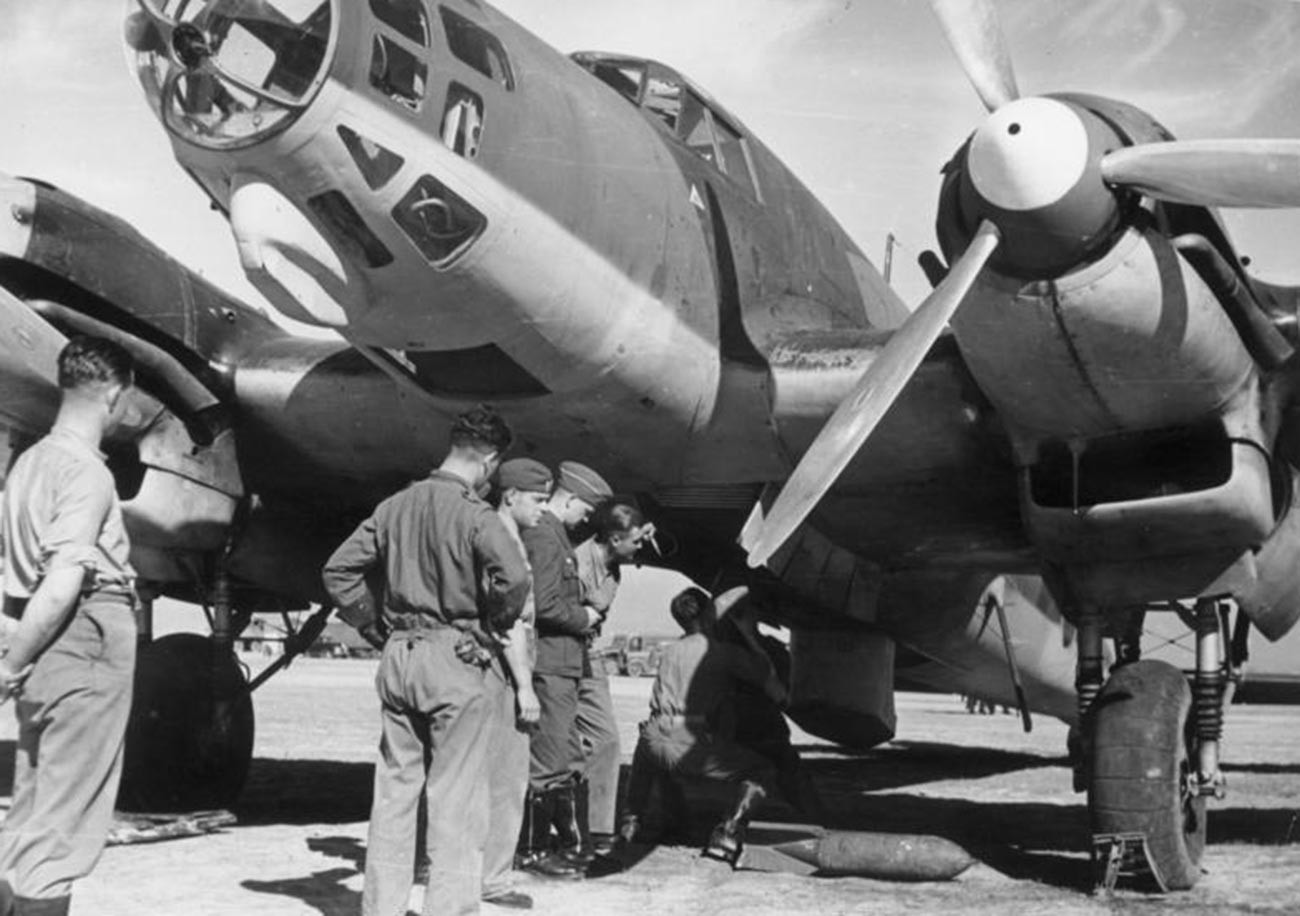 On February 8, 1945, during lunchtime at the test site, 10 prisoners stole up to the Heinkel and, having killed the guard, started preparing the plane for take-off. The entire plan almost fell through when it turned out that the aircraft’s electrical battery was missing; but it was quickly found and brought on board.

“No-one at the airfield paid any attention to the roar of our plane. I could easily picture how the technicians and pilots were reacting. They were happily eating… And that is why I was not afraid of opening up the throttle and trying out the engine at different revs. I felt confident and even relaxed. No-one would now stop us from accelerating for take-off and getting into the air,” is how Devyatayev remembered that day. “O foreign plane, foreign sky and foreign land - do not betray us, who have undergone starvation and suffering and want to exercise our right to escape death. If you oblige us, we will remember you often as long as we live and have kind words to say about you. We have our whole lives ahead of us - today we are born again.”

The first attempt to get into the air ended in complete failure. The plane reached the end of the runway without managing to get off the ground, and stopped almost at the edge of a sheer drop. Turning the plane round, Devyatayev made a second attempt, steering the bomber in the opposite direction straight through an assembled throng of astonished German soldiers. “They hadn’t expected the Heinkel to head straight for them. What is more, it was one of the prisoners who was piloting the plane and he was about to run them over! They scattered in all directions… I needed to take off before the anti-aircraft guns were ready to open fire… Before the soldiers had reported what they had seen… Before the order was given to scramble the fighter planes… Before it was too late.” 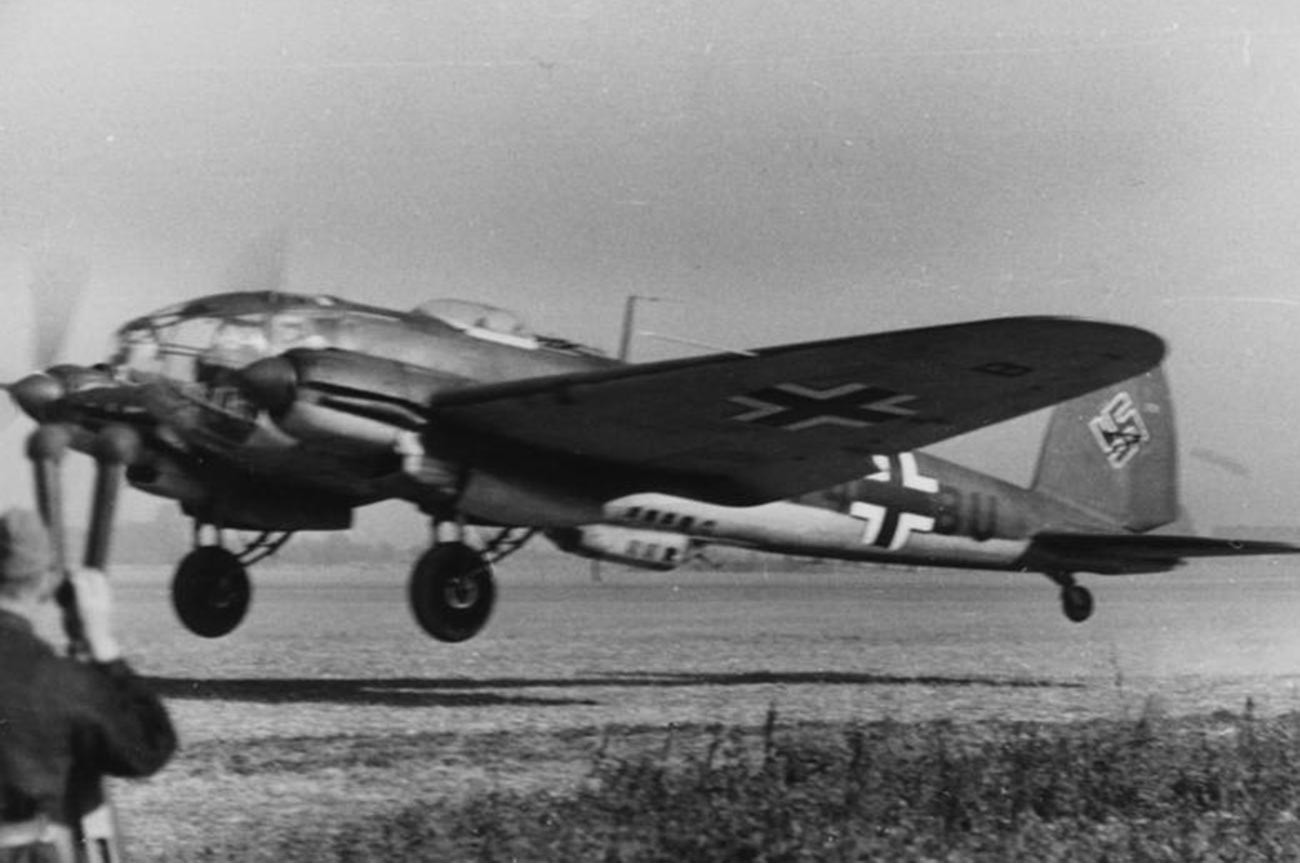 When Devyatayev finally managed to get the plane in the air, a warning siren blared out at the test range. The anti-aircraft guns were being readied to fire and the fighters were scrambling to take off, having received the order to shoot down the lone Heinkel. But it wasn’t at all clear in what direction they should give pursuit - the plane seized by the Russians was hidden in the clouds.

Only one Focke-Wulf reached the bomber. But it could not shoot it down - the fighter simply had no ammunition, having returned from a mission not long before the incident.

After studying the charts he found on board, Mikhail Devyatayev decided to steer the plane over the sea in the direction of Leningrad. When he was already over Soviet territory, another Focke-Wulf approached the bomber - its pilot could not understand why the Heinkel was heading for enemy positions at low altitude, with its landing gear lowered. 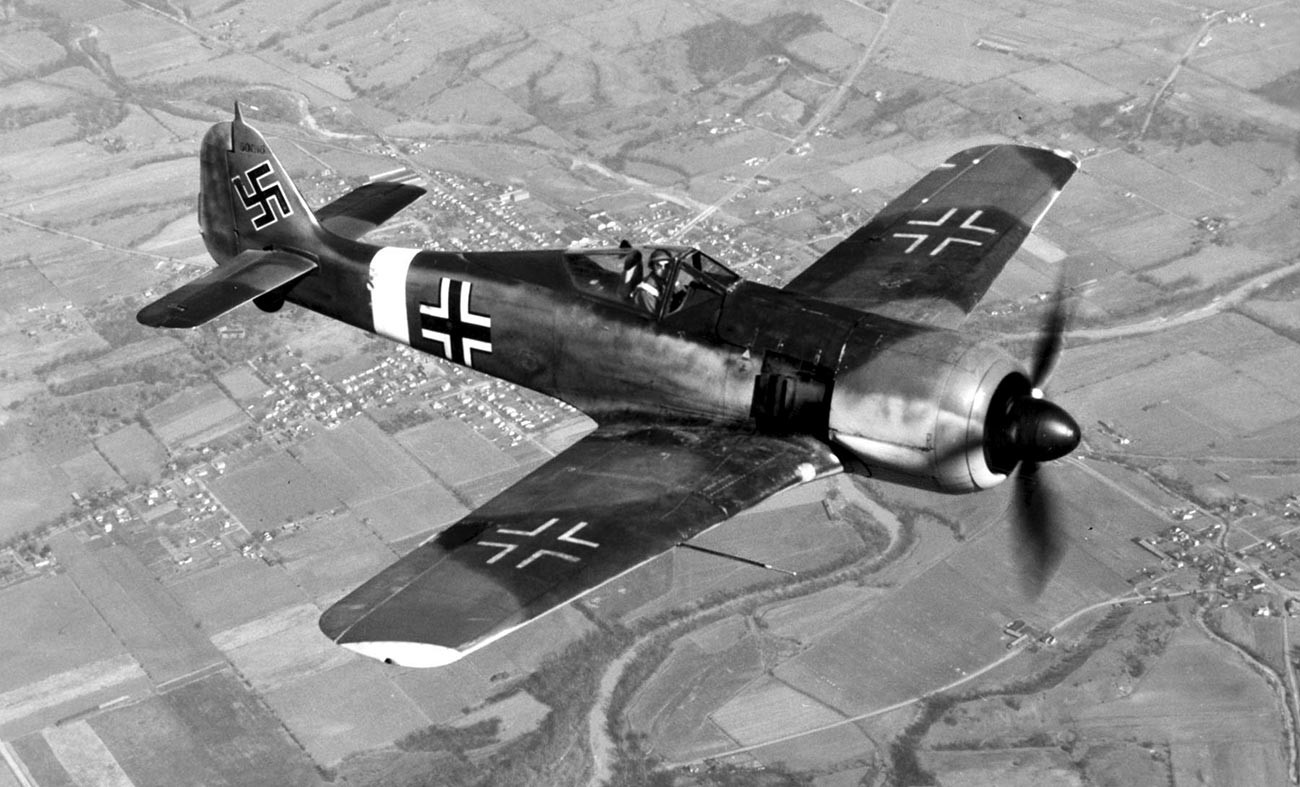 The fighter plane was chased away by Soviet anti-aircraft guns, but the guns hit the fugitive aircraft. Although he was under heavy fire, Devyatayev managed to land the plane, which was soon surrounded by Soviet infantry.

Mikhail and two other officers involved in the incredible escape had to spend some time in a screening camp while their ranks were verified. The remaining prisoners of the Usedom camp who had miraculously regained their freedom returned to the front, where almost all of them perished in battle shortly afterwards.

Devyatayev indicated the coordinates of the rocket launchers located on the island with an accuracy to within a dozen meters, and a blistering air strike was immediately mounted against them. In addition, it transpired that the Heinkel he had taken was crammed with secret communications equipment and instruments for the control and monitoring of V-rocket launches. 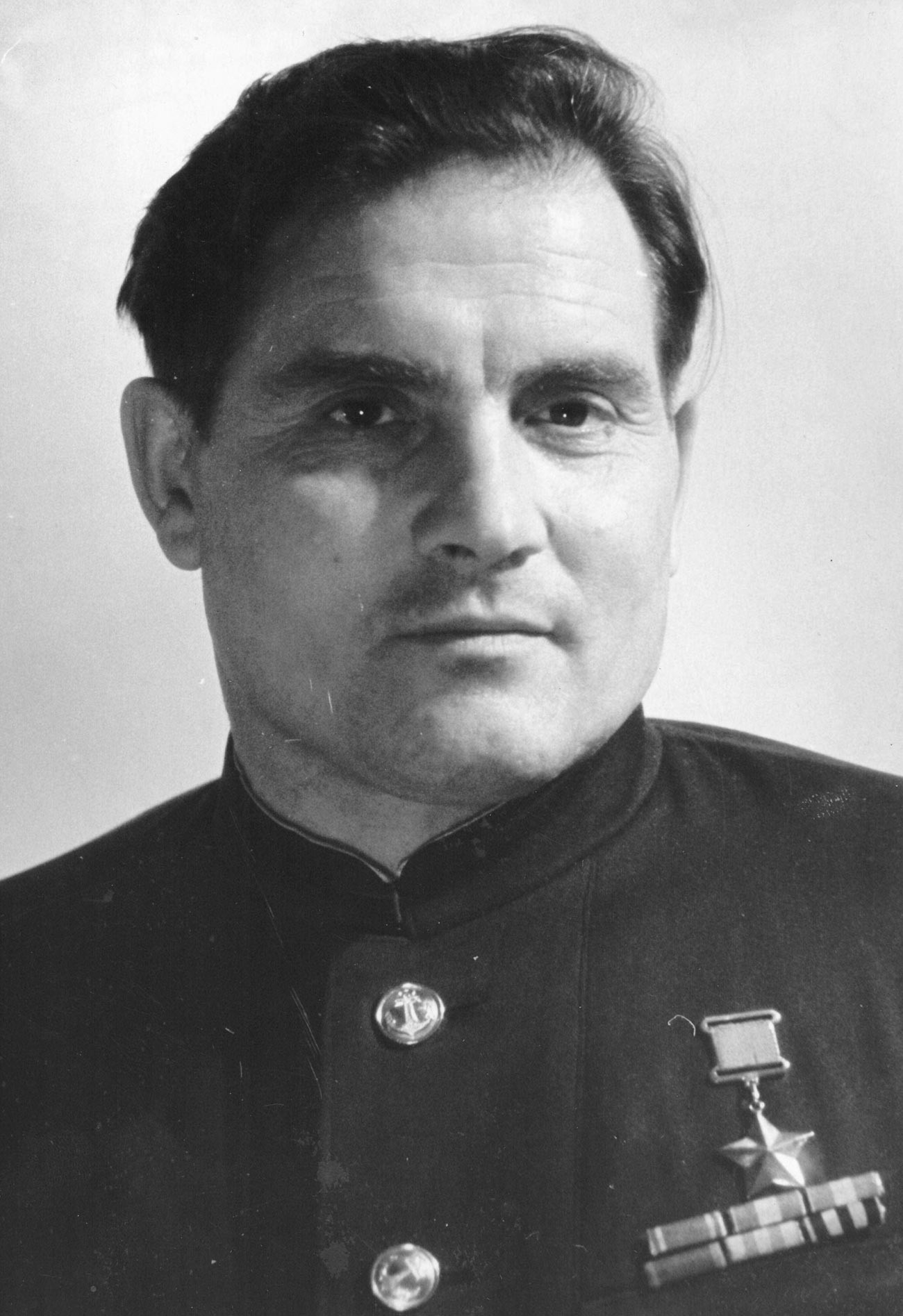 After the war, Devyatayev spent some time assisting the father of Soviet cosmonautics, the designer Sergei Korolev, in his research into German cruise and ballistic missiles, thus doing his bit for the Soviet Union’s development of advanced missile weapons systems. In 1957, at the scientist’s initiative, Mikhail Petrovich Devyatayev was awarded the title of Hero of the Soviet Union.