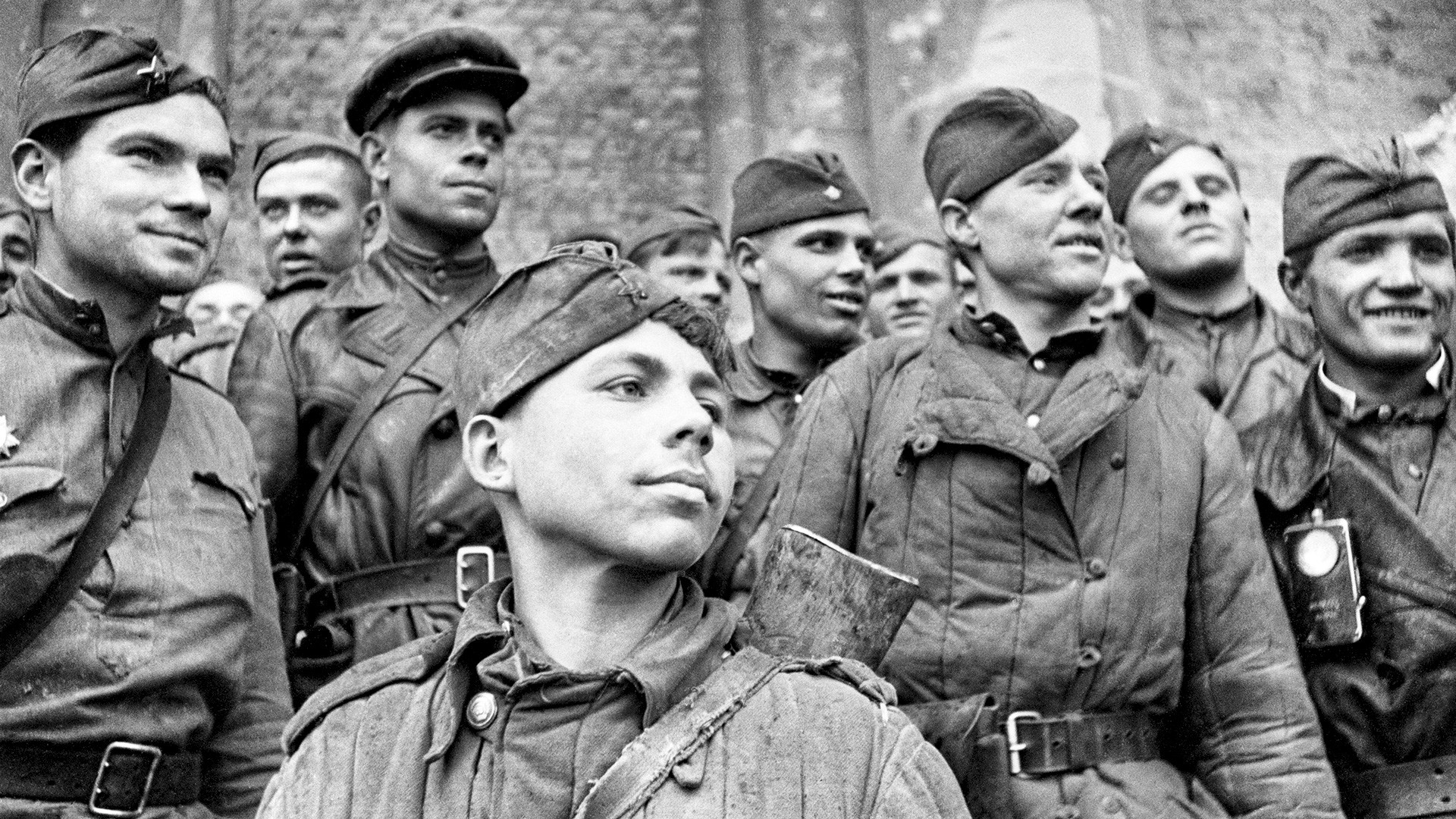 Alexander Kapustyansky/Sputnik
The Battle of Stalingrad was the turning point in the conflict between the Soviet Union and the Third Reich, and WWII as a whole. Thereafter, it was clear that Nazi Germany was doomed.

1. The Battle of Moscow 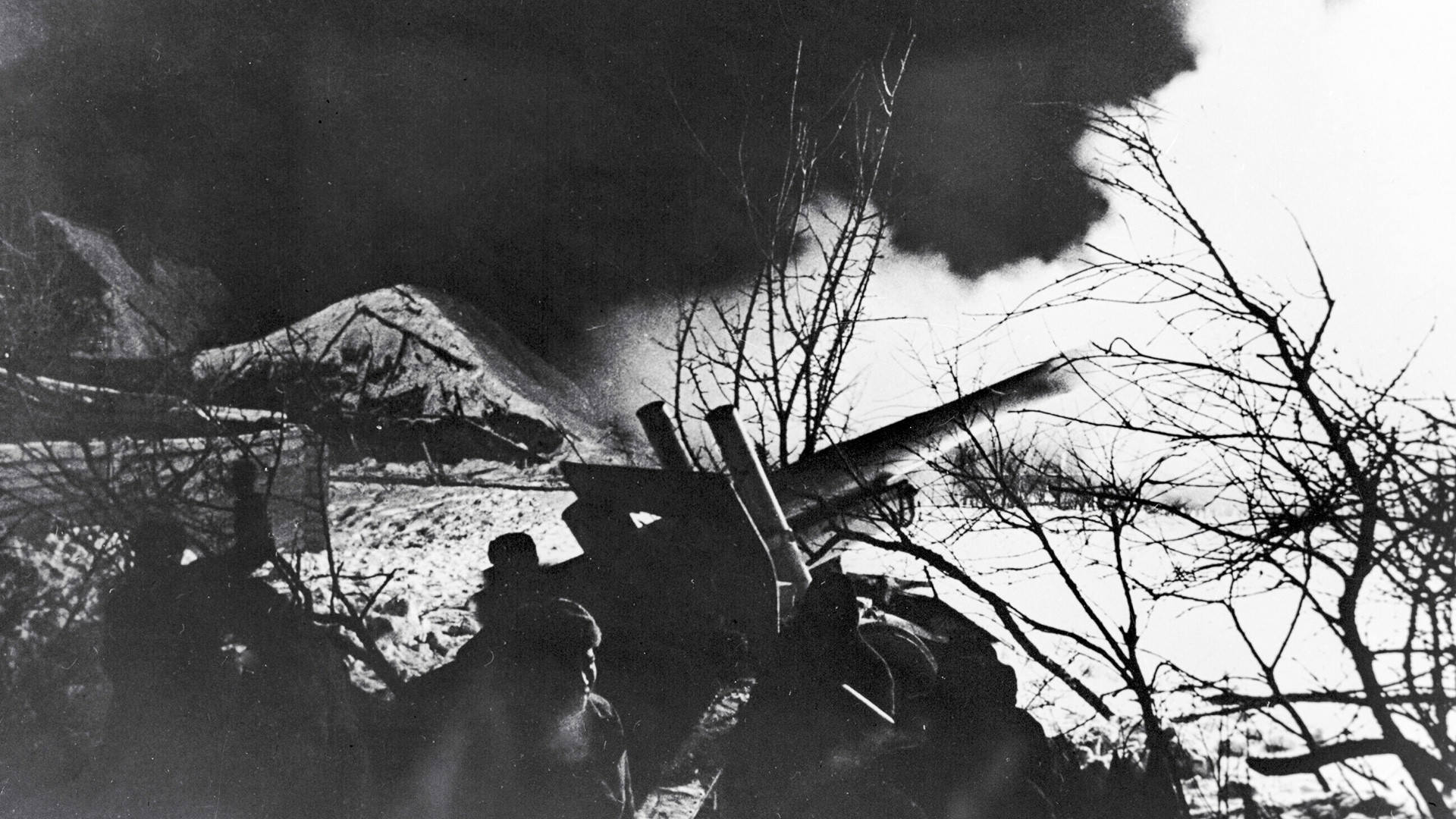 Soviet artillery near Moscow in November of 1941.

In October 1941, the USSR was on the brink of disaster. At Vyazma, just 200 km west of Moscow, the Red Army lost up to one million men killed, wounded or taken prisoner. The road to the Soviet capital lay open to the Wehrmacht.

Until the arrival of fresh divisions from Siberia, the Urals and the Russian Far East, the Soviet command did what it could to hold back the enemy. Nevertheless, the German advance was relentless, and on Dec. 2, units of the 2nd Panzer Division occupied the village of Krasnaya Polyana, just 30 km from the Kremlin.

The German command was convinced that the Red Army would soon collapse. In trying to inflict a final decisive blow, it ignored the fact that the constant Soviet counterattacks had left the German troops exhausted and overstretched, while tank and motorized divisions were struggling to overcome the numerous minefields on the approaches to the city. Supply problems exacerbated the situation, with horses dying en masse due to lack of fodder in the early winter conditions.

On Dec. 5, catching the enemy completely off guard, Soviet troops on the Western Front under Georgy Zhukov and the South-Western Front under Konstantin Timoshenko launched a massive counteroffensive. The already exhausted invaders were thrown back from the capital, and in some places the retreat turned into a dash for survival. Only in early January 1942 did the Germans manage to stabilize the frontline.

“The Moscow offensive ran aground. All the sacrifices and efforts of our valiant troops were in vain,” wrote General Heinz Guderian in his Memories of a Soldier. The blitzkrieg (“lightning war”) strategy had failed. The German troops, having been pushed back 100-250 km, no longer posed a serious threat to the Soviet capital.

2. The Battle of Stalingrad

After a crushing Soviet defeat near Kharkov in May 1942, the Wehrmacht took the opportunity to launch a large-scale offensive on the oilfields of the Caucasus and the symbolically named city of Stalingrad, a large industrial center and important transport hub on the Volga. Its loss could have spelled the end for the Red Army.

Extensive bombing and ferocious street battles completely ravaged the city. Desperate resistance against the German onslaught came from the 62nd Army, which was forced to retreat to the river, where it fought tooth and nail to hold the vital Krasny Oktyabr and Titan-Barrikday plants.

“We were hungry and lice-ridden, but in the frenzy there came a point when I pitied no one, not even myself... We fought savagely for every brick in every wall, and at night both we and the Germans would crawl forward through the factory and tunnels. We did it to find food and ammunition, the Germans to push us into the Volga. The hand-to-hand combat was incessant...” recalled Private Milya Rozenberg of the 138th Infantry Division.

On Nov. 19, 1942, with the German 6th Army now completely bogged down, the Soviets launched large-scale attacks on its flanks, defended by poorly armed Romanian troops. Having broken through their defenses, the Red Army encircled the 330,000-strong enemy forces at Stalingrad, and by the beginning of February 1943 had annihilated them. The human cost of perhaps the bloodiest battle in history was up to two million killed and wounded on both sides combined.

The defeat at Stalingrad shocked the Third Reich and its allies to the core, so much so that the latter secretly began seeking ways to extract themselves from the conflict. Turkey, for instance, abandoned plans to join the invasion of the Soviet Union. It was a watershed moment in the wider global war.

3. The Battle of Kursk 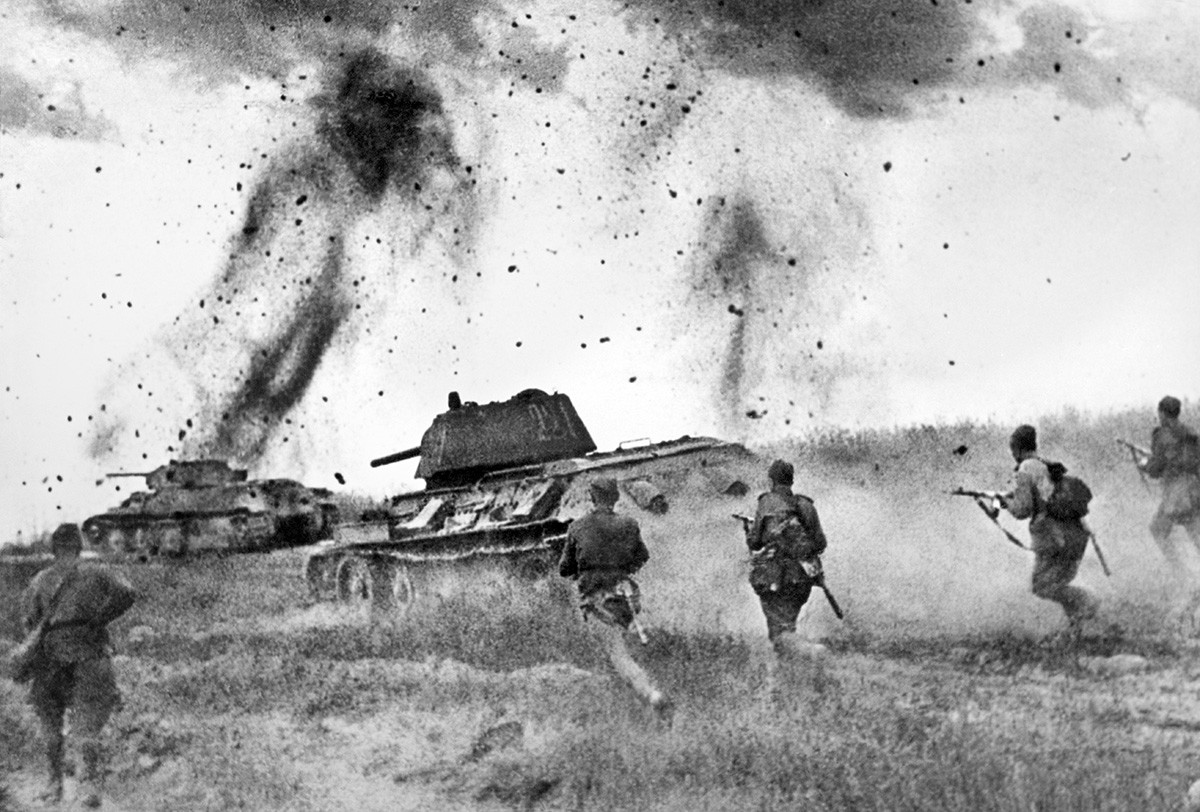 Attack of the Soviet 5th Guards Tank Army during the Battle of Kursk.

In the summer of 1943, the Germans were preparing for a major offensive in the central part of the Soviet-German front in the region of the city of Kursk. By defeating the Red Army here, the Wehrmacht hoped to regain the strategic initiative lost after the debacle at Stalingrad.

But the German plans for a surprise strike were thwarted. Soviet military intelligence knew in advance about Operation Citadel, and even the exact date when it would start — July 5.

Up to 2 million personnel, 4,000 aircraft and 6,000 tanks on both sides took part in the Battle of Kursk, making it, inter alia, the greatest tank battle in history.

The main German strikes were met with fierce resistance by the Soviet defenders, and a week later the enemy had advanced no more than a dozen kilometers. “The battle was so ferocious that I vividly remember wishing to be wounded or killed...” recalled mortar company commander Yevgeny Okishev: “The nerves were frayed, the heat was intense, there was no food... Our entrenchments were on high ground, all the approaches to them were exposed to German fire.”

Having withstood the German blow, the Red Army unleashed a large-scale counter-offensive, which led to the defeat of the depleted enemy. This time, the Wehrmacht lost the initiative in the war against the USSR for good; only retreat beckoned. “There were no more calm days on the Eastern Front,” Heinz Guderian noted in Memoirs of a Soldier. 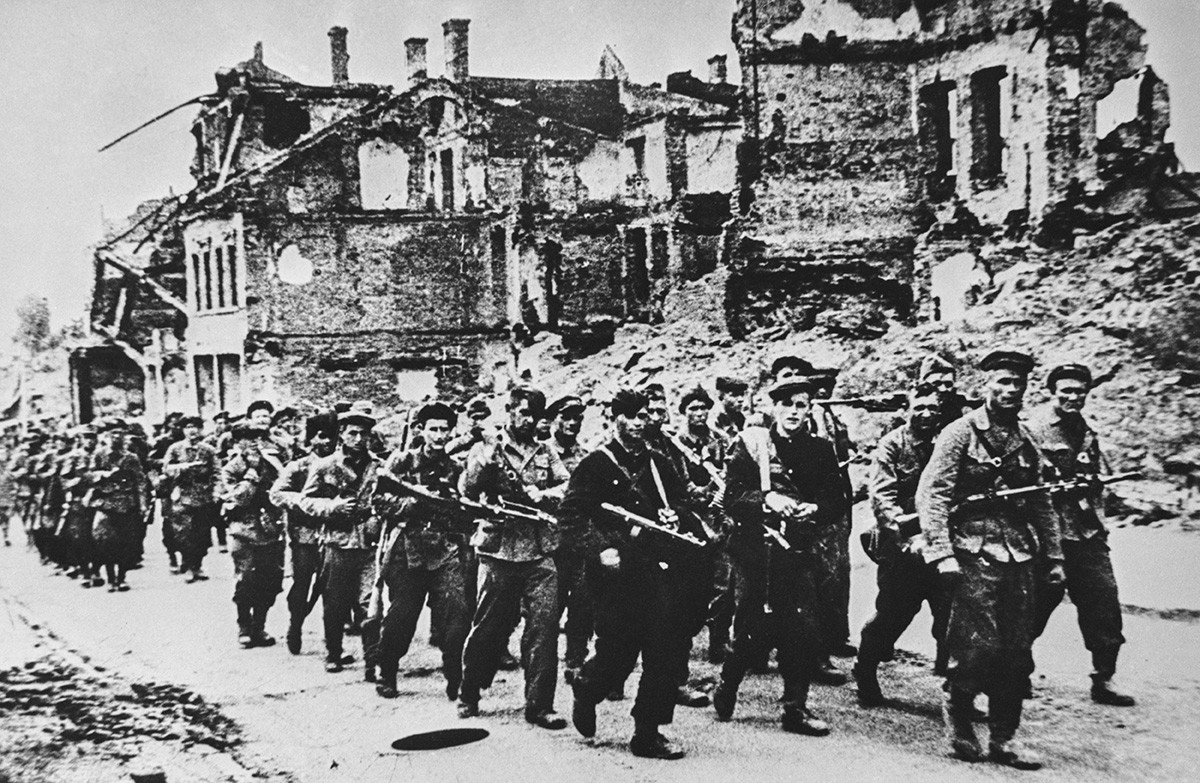 In the summer of 1944, the Red Army deployed the Wehrmacht’s own blitzkrieg strategy against it. It had been demonstrated that the well-coordinated deployment of tank and aircraft formations could overwhelm numerically superior enemy defenses. Now the Soviets used the tactic to surround and quickly destroy large groupings of German troops.

The large-scale offensive against Army Group Center in Belarus, which began on June 23, 1944, came as a nasty surprise for the German command. It believed that the Red Army would continue to prioritize Ukraine for the main thrust of its attacks, with a view to reaching the oilfields of Romania.

Operation Bagration, named after Pyotr Bagration, a Russian commander during the Patriotic War of 1812 against Napoleon, lasted just over two months. During this time, Soviet troops, advancing 600 km to the west, liberated the territory of Belarus and part of eastern Poland, and reached the approaches to Warsaw and East Prussia. Army Group Center, with up to half a million personnel killed, wounded or captured, effectively ceased to exist.

Belarusian partisans played a significant role in the operation. They not only pointed out the most vulnerable areas in the enemy's defense, but attacked from the rear, aiding the offensive troops at the most decisive moments of the battle. “Every day the list of derailed fascist trains grew longer,” wrote Marshal Ivan Baghramyan in his memoirs Thus We Went to Victory: “Railway operations in the Nazi rear were virtually paralyzed. It was no easier for them on the highways. The partisans gave no respite here either, day or night.”

On July 17, 1944, a column of German prisoners of war captured during the fighting in Belarus was led through the streets of Moscow. A total of 57,000 German soldiers and officers, including several dozen generals, took part in the so-called “Parade of the Vanquished” in the Soviet capital.

5. The Battle of Berlin 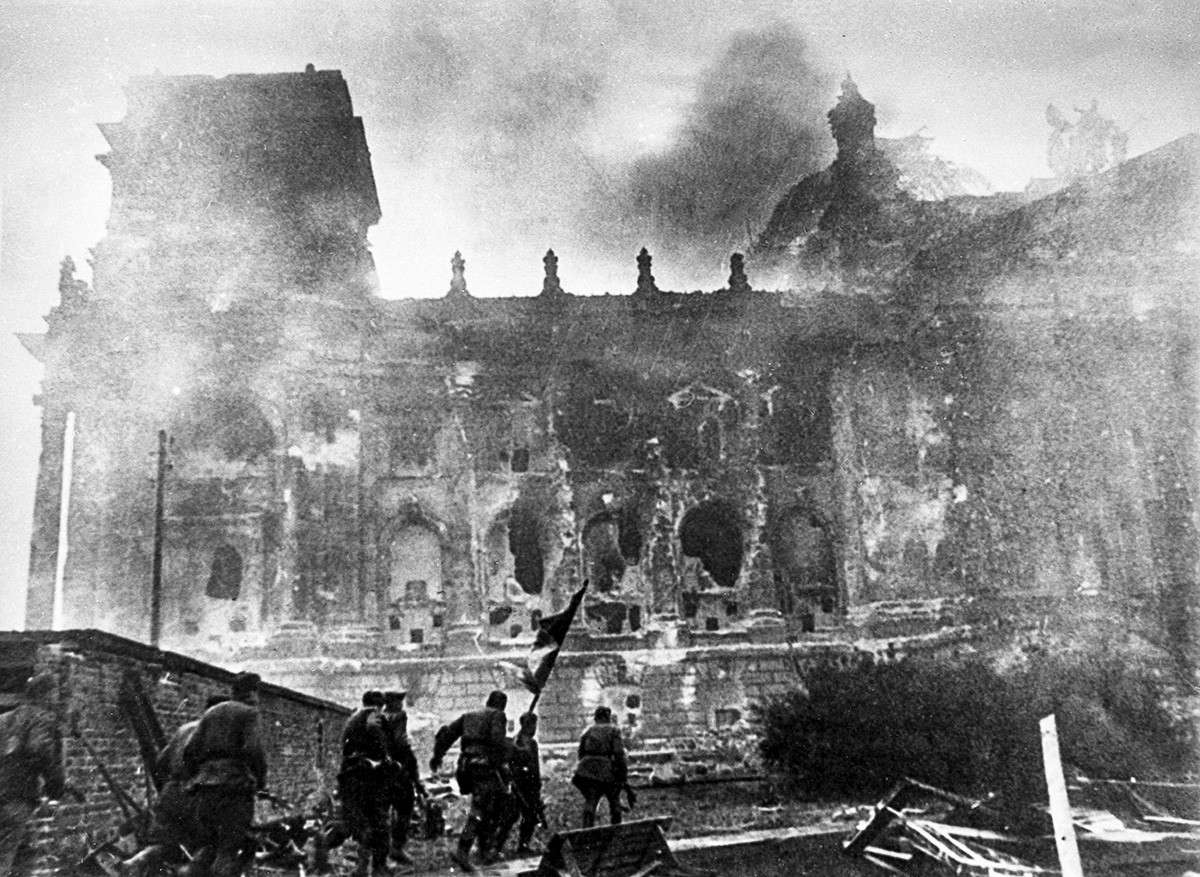 For the attack on the capital of the Third Reich, the Soviet command mustered a force more than two million-strong. They were opposed by 800,000 soldiers of the Wehrmacht, SS and the Volkssturm (people’s militia). The German defenders turned their city into an impregnable fortress, with several lines of defense on the approaches.

On April 20, 1945, the long-range artillery of the 79th Rifle Corps “congratulated” the Fuhrer on his birthday by inflicting the first artillery strike on Berlin. Five days later, the city was encircled by the Red Army.

For almost a week, fierce fighting continued on the streets of Berlin. Every avenue the Germans packed full of barricades, dugouts, trenches and machine-gun nests. The closer the Soviet troops got to the center, the stronger the resistance became.

April 30 saw the start of the battle for the Reichstag. Although the red flag was raised over it in the early morning of May 1, the skirmishes lasted the whole day.

After Hitler’s suicide that same day, April 30, the new German leadership proposed an armistice to the Soviet command, to which the USSR responded it would accept nothing less than unconditional surrender. The Germans refused, and the fighting resumed with renewed vigor. But not for long. On May 2, the Berlin garrison finally capitulated.

“Our fighters displayed tremendous inspiration, heroism and audacity in combat. Our army’s maturity, its growth during the war years, was fully reflected in the Battle of Berlin. Soldiers, sergeants, officers and generals in the Berlin operation proved themselves to be creatively mature, resolute and desperately brave,” wrote Marshal Georgy Zhukov.

In total, more than 75,000 Soviet soldiers laid down their lives in the battles for the German capital.