Samary Gurary/Sputnik
The Soviet counteroffensive near Moscow in December 1941 came as a complete surprise for the Wehrmacht. The Germans were sure that the Red Army had been almost finished.

The initial period of Operation Barbarossa was a real nightmare for the Red Army. Over a course of several months, the Wehrmacht had occupied the entire Baltic region, Byelorussia and most of Ukraine. Hundreds of thousands of Soviet soldiers had been killed or captured, while the Germans came very close to the country’s main cities, Leningrad and Moscow. 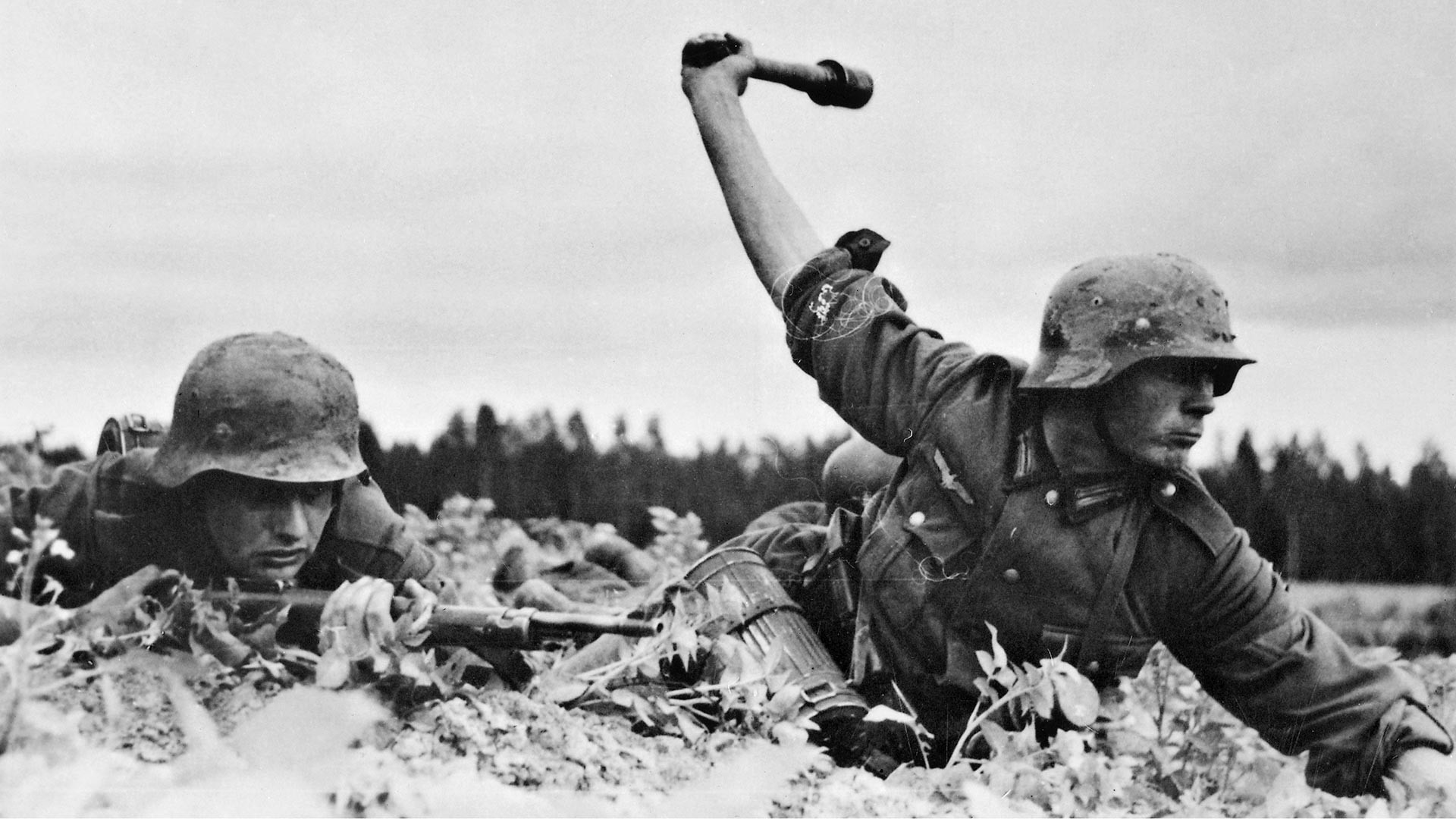 German troops on the Eastern front.

In early October 1941, just 200 km from the capital, near Vyazma, four Soviet armies, having been surrounded, lost about a million people, either killed, wounded or captured. Moscow ended up practically defenseless. On October 15, the city was gripped by panic, as its residents fled en masse to the east and the chaos was accompanied by looting and robbery. “A bunch of people in the street were forcing open the doors of a store, someone was already stealing food,” engineer Susanna Karpacheva recalled. “There was an endless stream of people with backpacks moving along the highway, as well as cars and trucks loaded with household belongings. Today, people were leaving Moscow, just as yesterday they were leaving Vyazma.” It was only by applying tough measures, including a curfew and military patrols, that the authorities managed to bring the situation in the city back to normal. 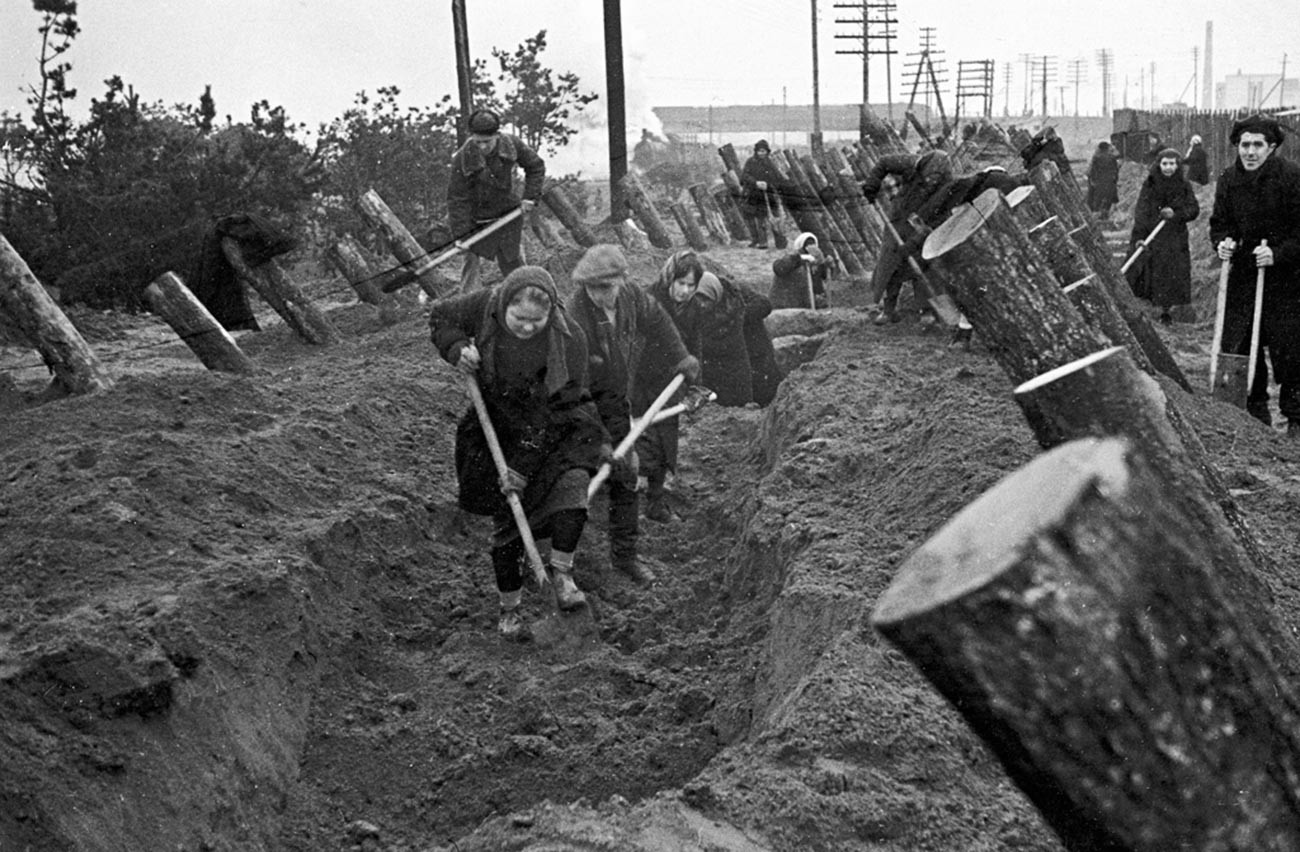 Moscovites construct defense lines on the approaches to the city.

Until reserve units from Siberia, the Urals and the Far East arrived to defend the capital, the Soviet command tried to gain time and delay the enemy as long as possible. All available regiments and divisions were thrown to the hastily constructed defense lines on the approaches to Moscow. They were reinforced by military school cadets from Moscow (so-called ‘Kremlin cadets’) and Podolsk, many of whom were not even 18 yet. Upon graduation, they were supposed to join the Armed Forces as commanders, but now they were going to the front as privates. 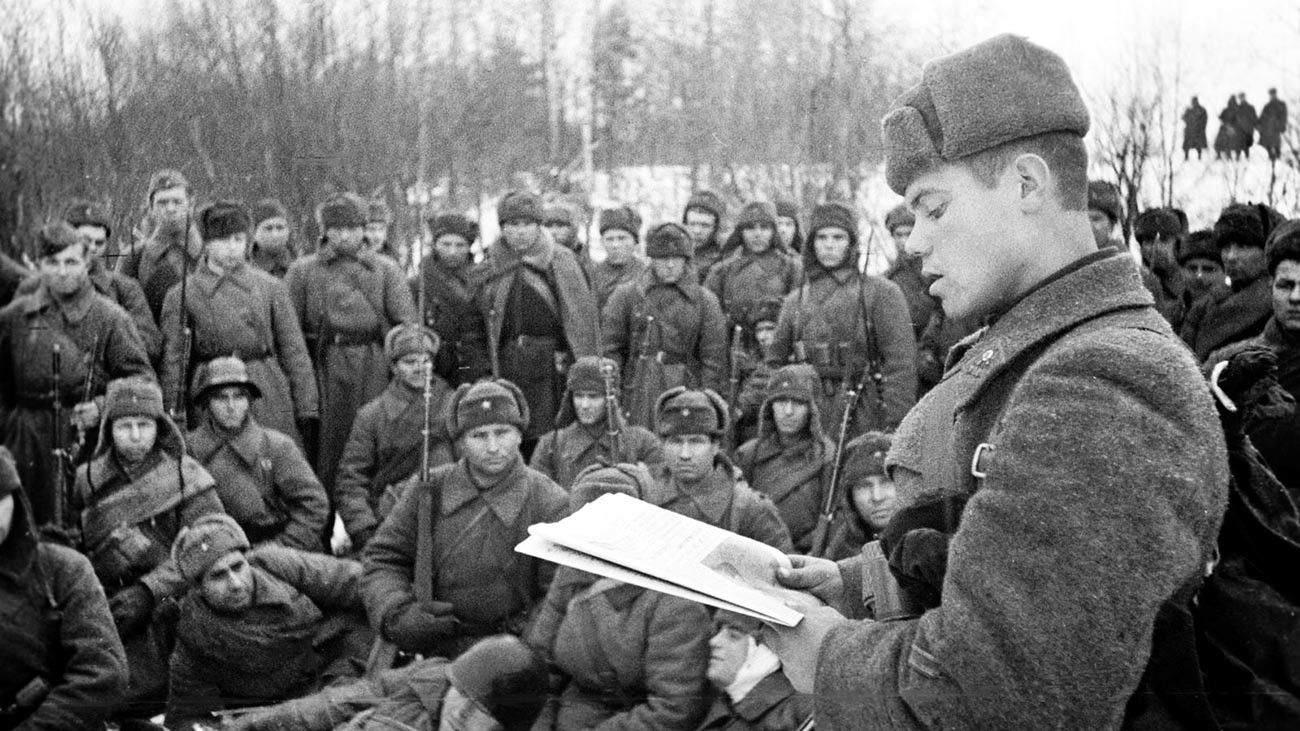 In heavy and fierce fighting, combined detachments of cadets from the Podolsk infantry and artillery schools, having lost 2,500 people of the total of 3,500, managed to hold the enemy back for 12 days, although their order had been to last for just five days at most. “The first platoon blows up a bunker where we break through the lines,” Adalbert Wasner of the 19th Panzer Division of the Wehrmacht recalled. “Extremely fierce close combat ensues, with both sides suffering losses. The first prisoners are taken. These are cadets of the Podolsk military school. They are called ‘Stalin cadets’ and they all fought extremely bravely.” 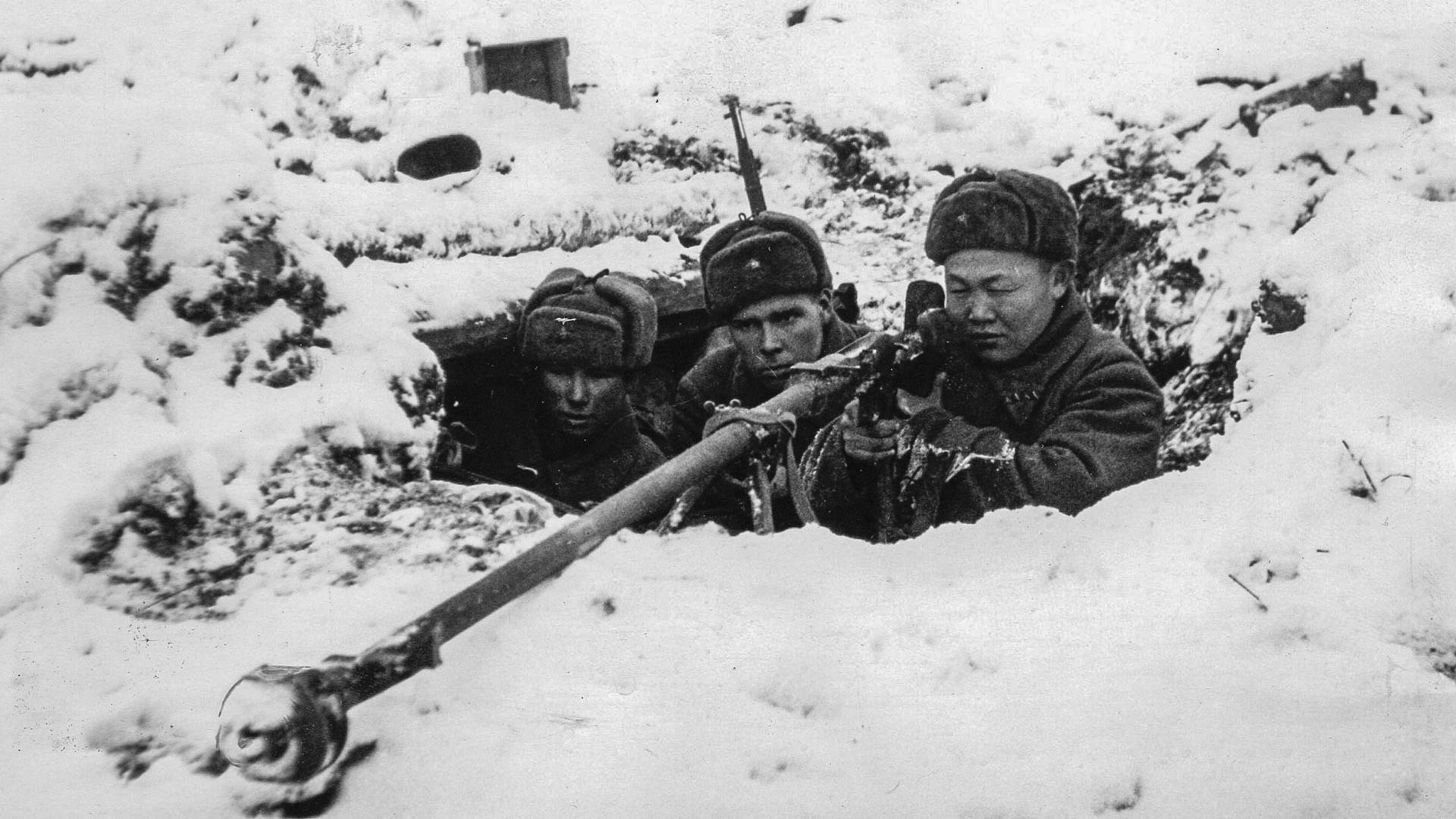 On November 7, the 24th anniversary of the Bolshevik Revolution, a military parade was held on the Red Square. Some of the units that took part in it marched straight to the front, which was relentlessly getting closer to the capital. As Marshal Georgy Zhukov wrote in his memoirs Reminiscences and Reflections: “That event played a huge role in strengthening the morale of the army and of the Soviet people and was of great international importance.” The parade showed to the world that the Soviet Union had not yet been beaten. What particularly mattered to Muscovites was that Stalin himself was present at the parade and delivered a speech there. People saw that the supreme commander-in-chief was still in Moscow, although most of the government by this time had already evacuated to Kuibyshev (Samara). 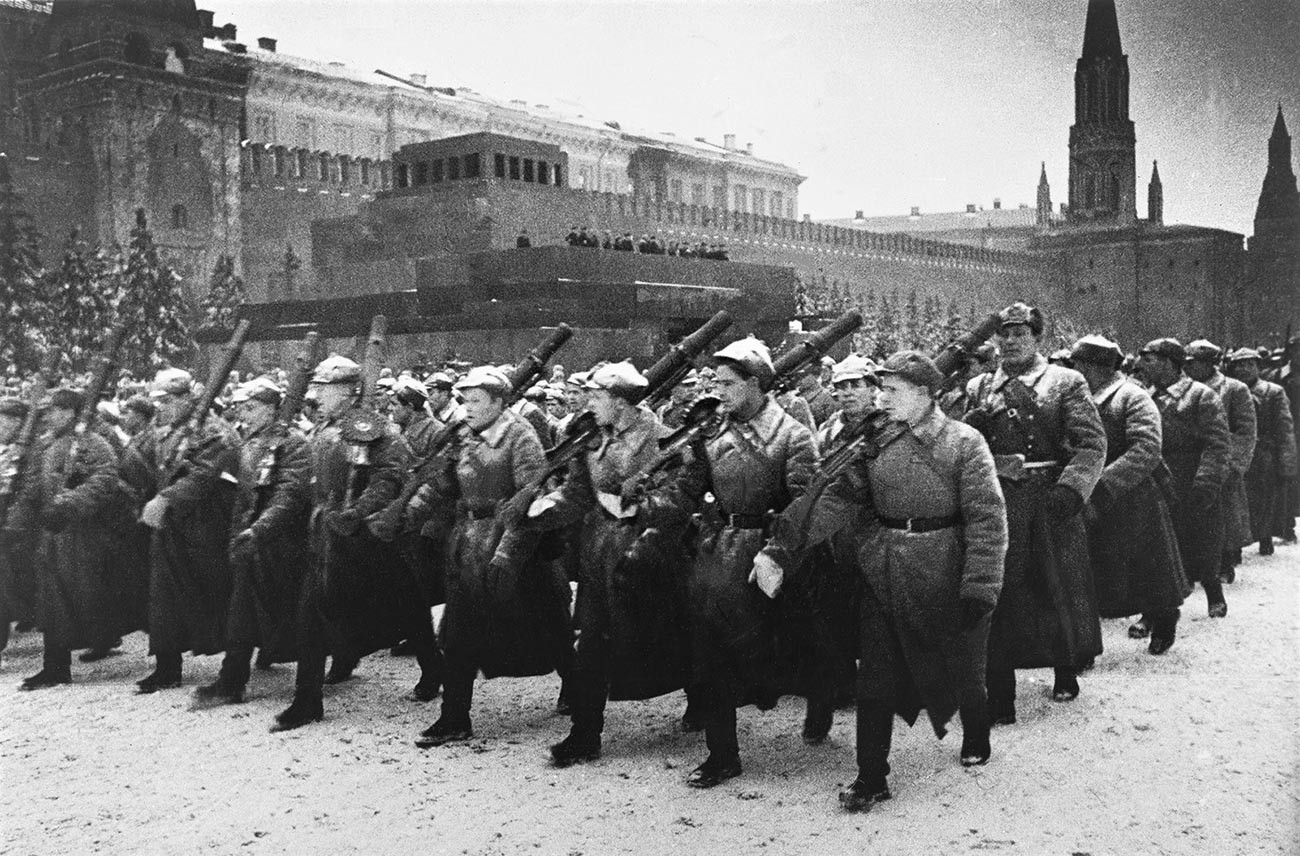 On December 2, units of the 2nd Panzer Division of the Wehrmacht occupied the village of Krasnaya Polyana, just 30 km from the Kremlin. Given the vast territory and human resources of the USSR, German military leaders understood that the war was not over yet, but they were sure that the backbone of the Red Army had been broken. “Russia’s military might no longer poses a threat to Europe,” Franz Halder, chief of staff of the Army High Command, wrote in a war diary on November 23. 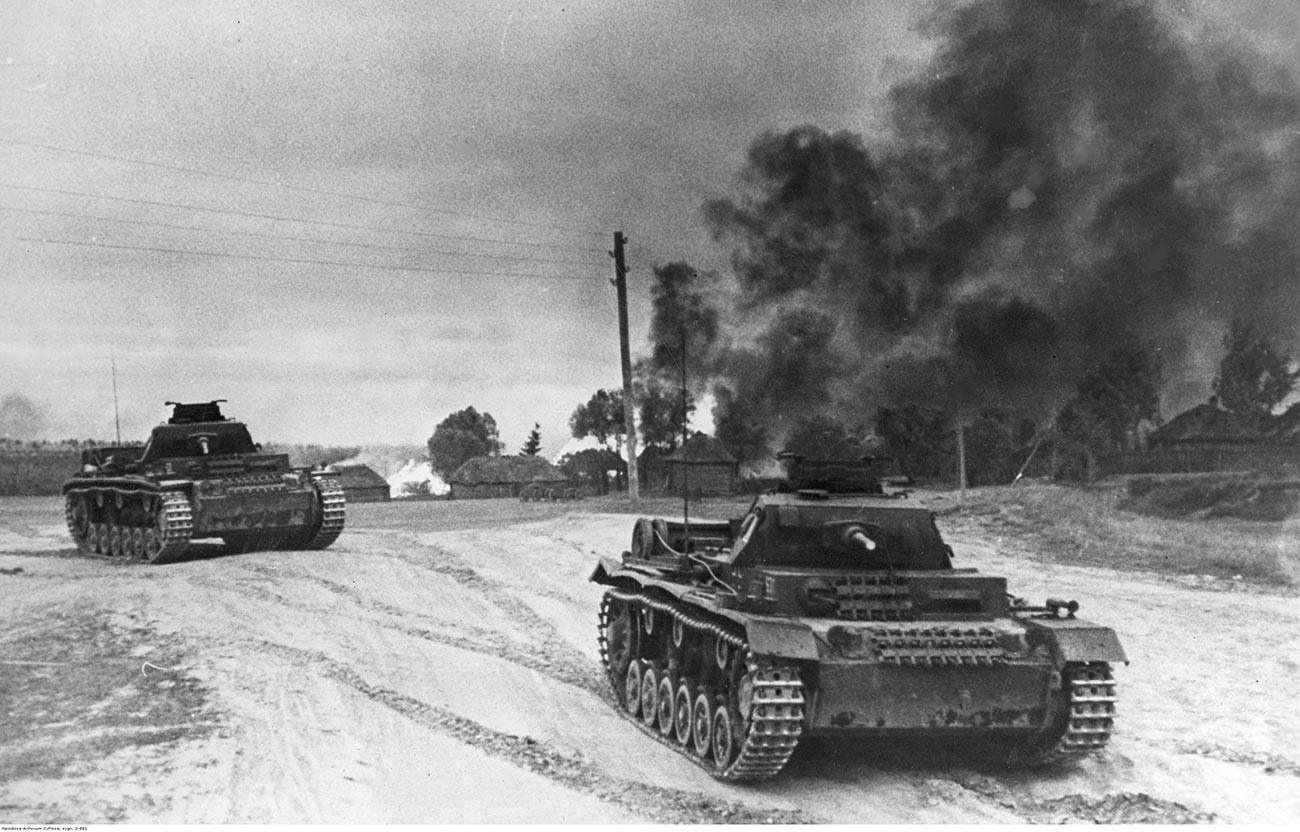 And yet, the Wehrmacht’s affairs on its way to the Soviet capital were not going as smoothly as the German military leadership would have liked. The Red Army’s stubborn resistance and constant counterattacks exhausted and overstrained the German troops. The movement of German armored units was hampered by the heavy mining of all approaches to the city competently carried out by Soviet military engineers. In addition, the Germans began to experience problems with supplies and their horses were dying en masse, left without fodder as the winter was setting in. 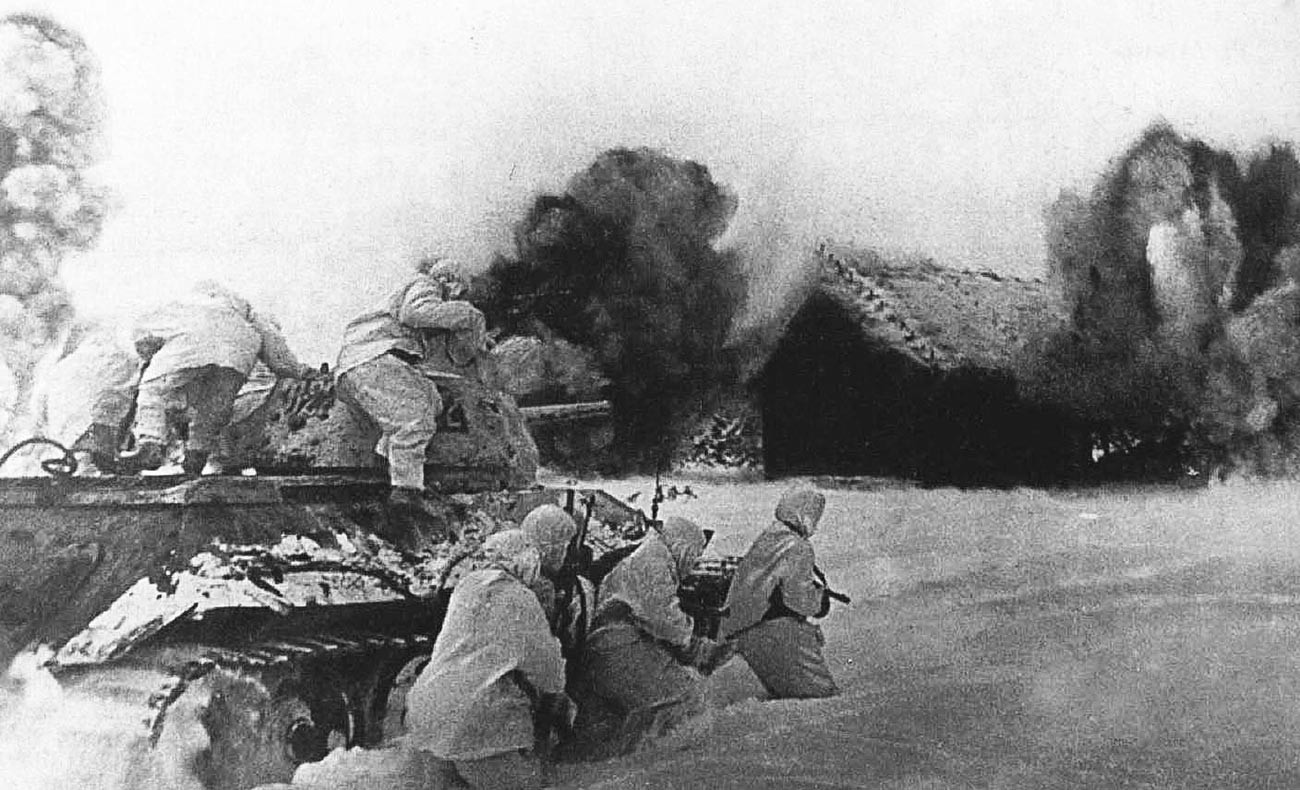 The German army was hoping for a final decisive push to Moscow, but failed to consider the fact that large freshly trained Red Army reserves were gathering in the city. On December 5, troops of the Western Front led by Georgy Zhukov and of the South-Western Front, led by Konstantin Timoshenko, launched a large-scale counteroffensive. “When we were advancing, our artillery delivered such heavy fire that it often suppressed the German defenses even before the infantry approached their positions. That is why when we entered villages, the Germans had already left them. It was there that I first saw Katyusha rocket launchers in action — an unforgettable sight. And, of course, all the villages had been burned to the ground,” recalled Private Gerts Rogovoy.

The German troops began to rapidly retreat from the capital. In some places the retreat turned into a panicked flight and advancing Red Army units seized artillery systems abandoned by the enemy. On December 19, Adolf Hitler replaced Walther von Brauchitsch as commander-in-chief of the German army and dismissed Fedor von Bock as the commander of Army Group Center. The commander of the 2nd Panzer Group, Heinz Guderian, who, too, had lost his post, would many years later write in his book Memories of a Soldier: “The attack on Moscow failed. All the sacrifices and efforts of our valiant troops were in vain.” It was only in early January 1942 that the Germans managed to stabilize the front line.

Having inflicted a stunning blow to the Wehrmacht, the Red Army pushed the enemy 100-250 km from Moscow. It managed to liberate significant territories and, on the whole, eliminate the threat to the capital. However, the military leadership’s ambitious plans to continue the offensive and completely defeat Army Group Center resulted in heavy fighting, arduous attempts to escape encirclement and in heavy losses for the Soviet troops. Despite the triumph in the Battle of Moscow and the collapse of the blitzkrieg strategy, the turning point in the war was yet to come. 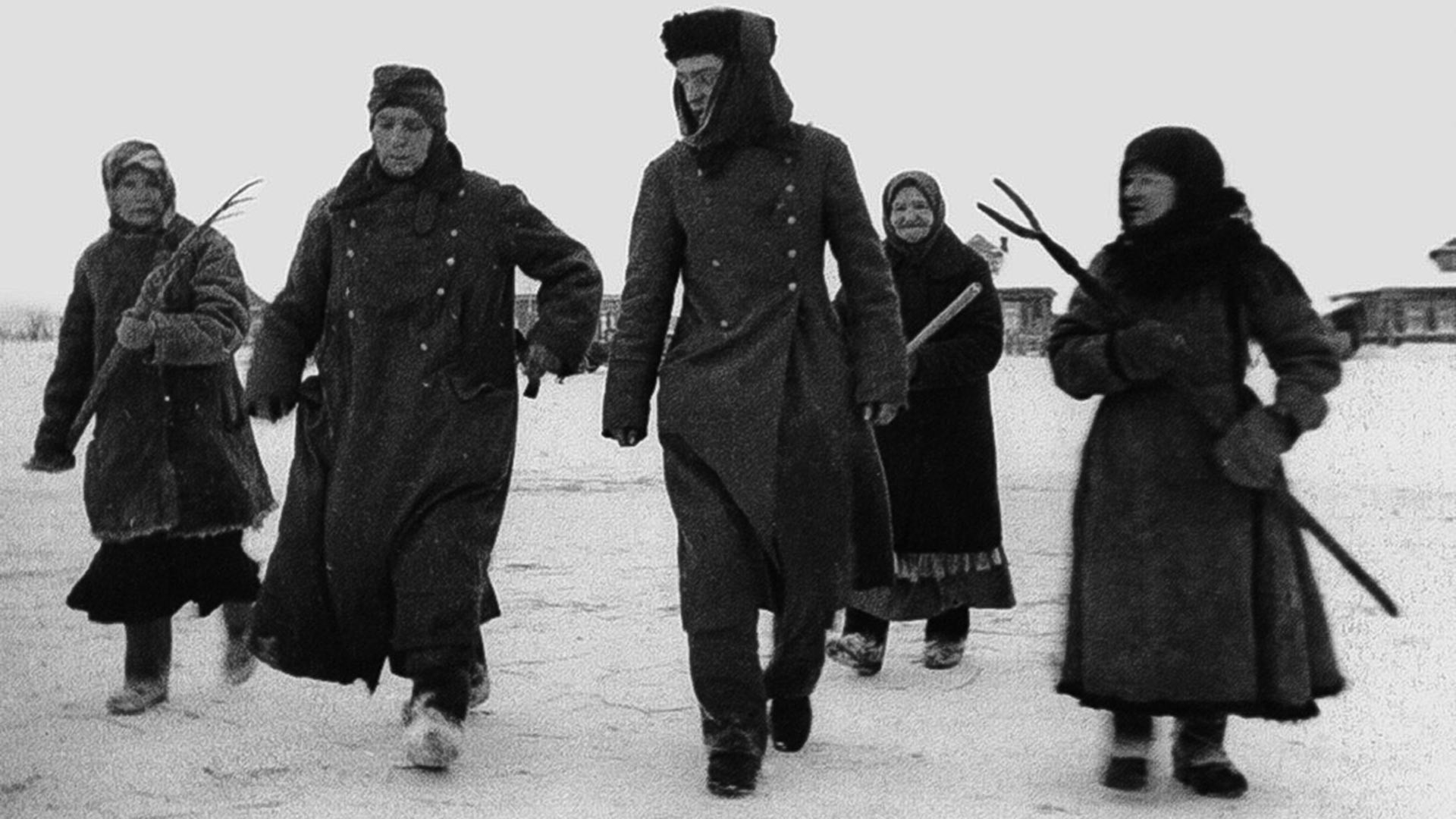