Did Soviet cosmonauts believe in God? 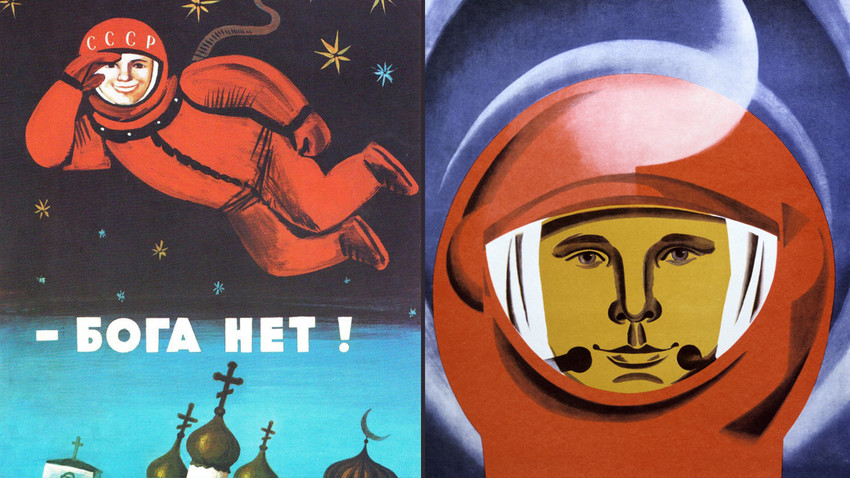 Poster "The road is wider without God." 1975/Yuri Gagarin Poster.

Vladimir Menshikov; Universal History Archive/Getty Images
Religion was a taboo back in the day, but it, nonetheless, proved hard to eradicate.

“I went up to space, but I didn’t encounter God.” This phrase was attributed to Yuri Gagarin — the first man in space — after he had returned from his milestone mission. The Soviet propaganda machine used the line to, once again, strike the point home: science is superior to religion and, hence, the secular Soviet society is bound to succeed in the ideological war.

In reality, however, it proved much more difficult to eradicate faith from the minds of even Soviet cosmonauts.

After Gagarin had returned from space, he attended a reception in the Kremlin. There, a humorous interaction reportedly happened between the newly made icon Gagarin and the Soviet leader Nikita Khrushchev. 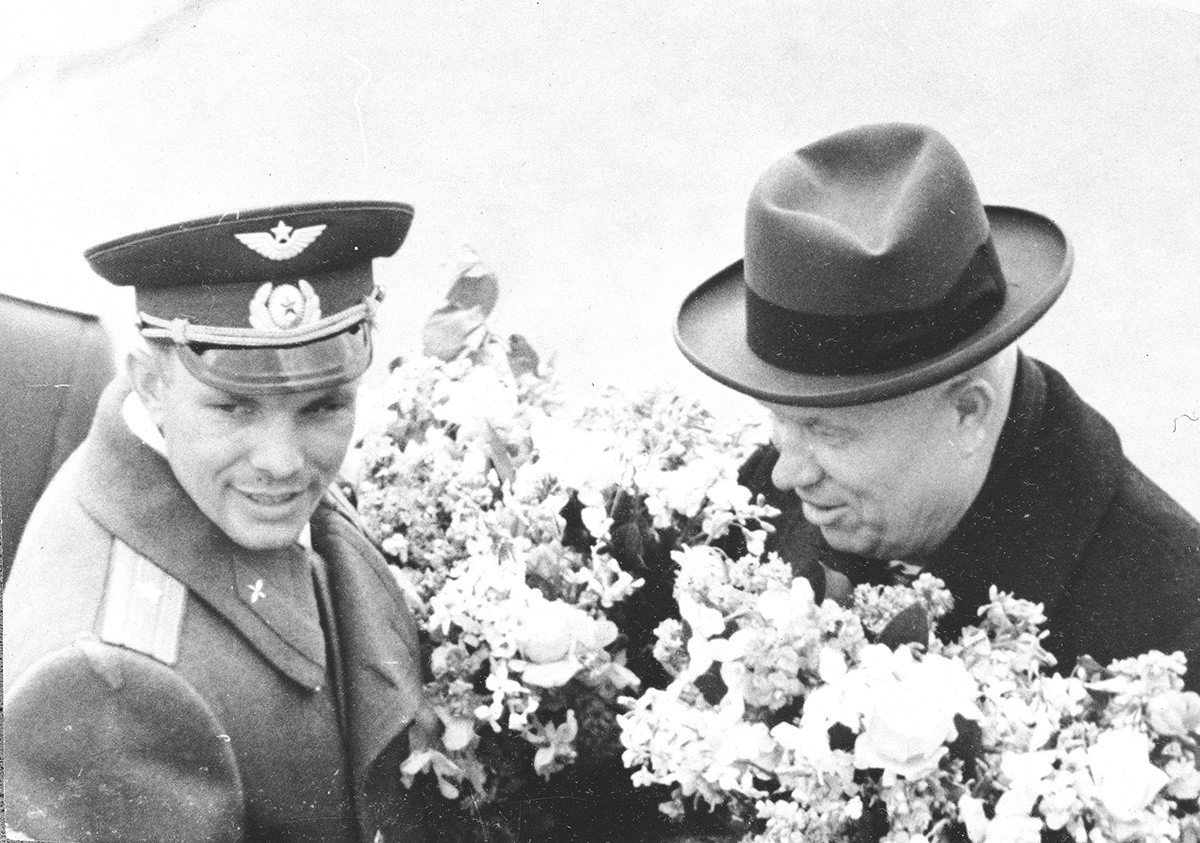 Yuri Gagarin and Nikita Khrushchev at Vnukovo airport during his welcome in Moscow after his flight on April 14, 1961.

According to the anecdote attributed to different sources, Khrushchev asked Gagarin if he saw God in space. “Of course I’ve seen him,” replied Gagarin mockingly.

Khrushchev’s reply was just as witty as Gagarin’s: “I knew it! But don’t tell anyone else.” 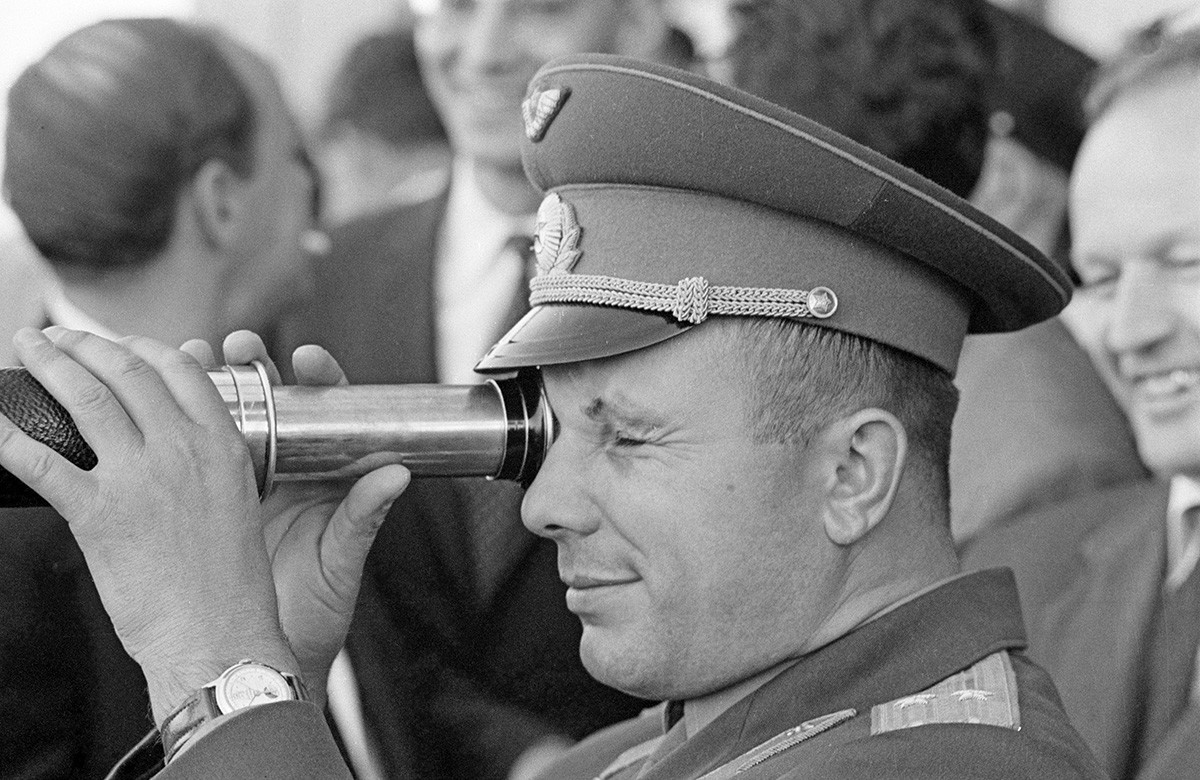 In reality, there are conflicting accounts of Gagarin’s view on religion. On the one hand, a book authored by Gagarin’s ghostwriters and released under his name — The road to space — showed Gagarin’s disfavor of religious beliefs:

“The manned space flight was a crushing blow to the churchmen. In the streams of letters that addressed to me, I was pleased to read confessions in which believers, impressed by the achievements of science, renounced God, agreed that there is no God and everything connected with his name is fiction and nonsense.”

When a journalist in Reykjavík asked Gagarin — who was on his international tour — if he had prayed before his flight, the cosmonaut replied briskly: “Communists never pray to God.”

Yet, some sources claim the first man in space was an inconspicuous believer, who did not want to compromise his position with the Soviet authorities by speaking up his mind.

Other Soviet cosmonauts, however, made no room for doubt about what they believed in.

‘Why do I believe’

Soviet cosmonaut Georgy Grechko became an ardent believer during WWII. He was only ten years old when Nazi Germany invaded the Soviet Union, but the memories of the horrors of war triggered the beliefs he later articulated in the following manner:

“Why do I believe? Because during the war, not even at the front, but in the rear or the occupation, as happened to me, a person has nobody to hope for but God. And I can tell you that almost everyone was a believer back then. Because [people] want to live. And I, as a boy, believed. I believe that I was born to become a cosmonaut. And when, out of naivety, out of passion, out of stupidity, I did something to get away from this path, I suspect that my guardian angel severely punished me. He drove me to despair. And then, in the most incredible way, he made me return to my path,” said Grechko. 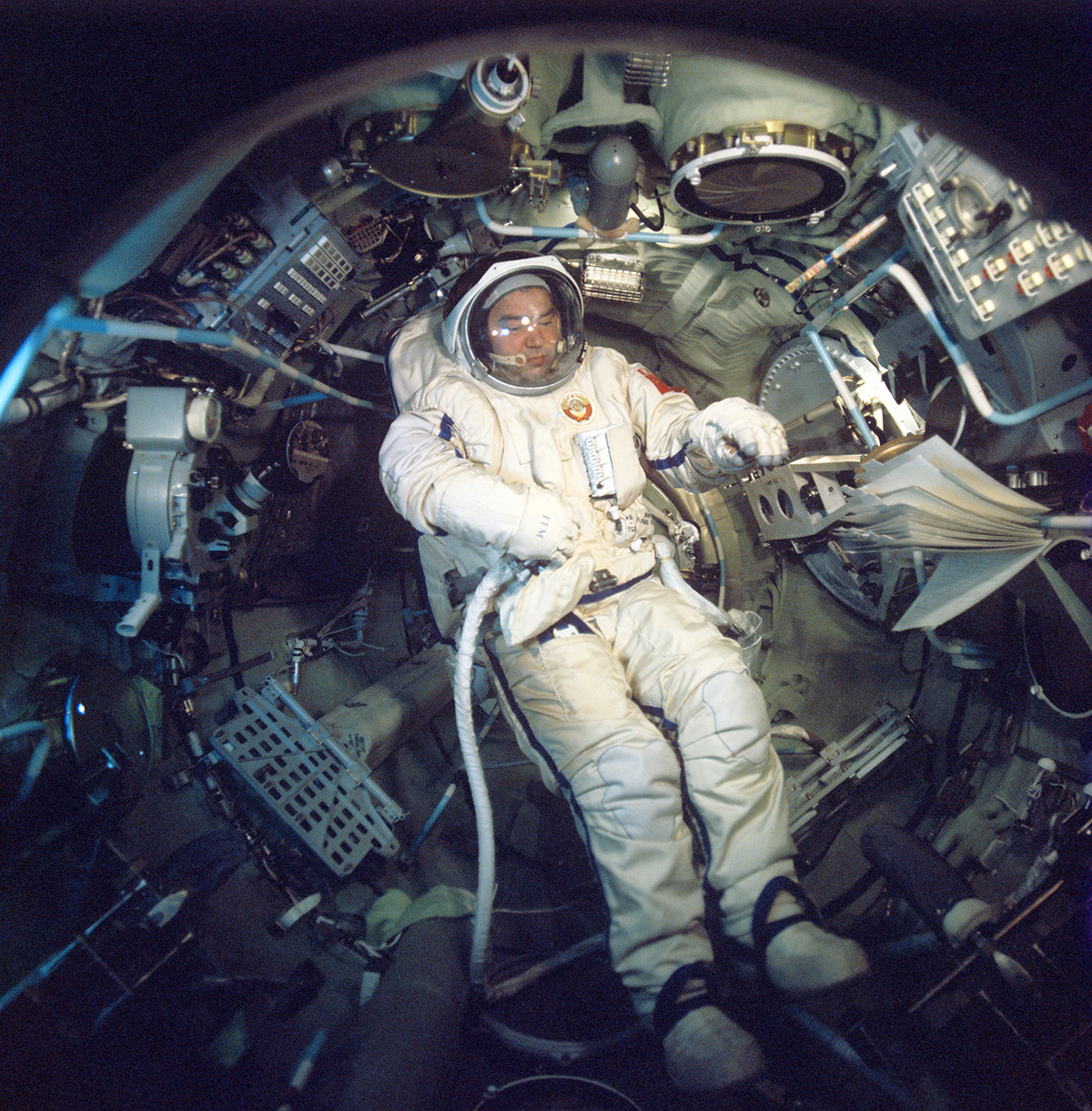 Soviet cosmonaut Georgy Grechko (flight engineer) on board of the space complex 'Soyuz-26'-'Salyut-6'.1978.

During Soviet times, faith was not approved by the state. Cosmonauts — people who were at the forefront of the Soviet technological race against the Western bloc and, therefore, embodied the Soviet system — went through a strict selection. It was unthinkable at the time that an outspoken believer could be deemed suitable for the noble role of a cosmonaut during Soviet rule. 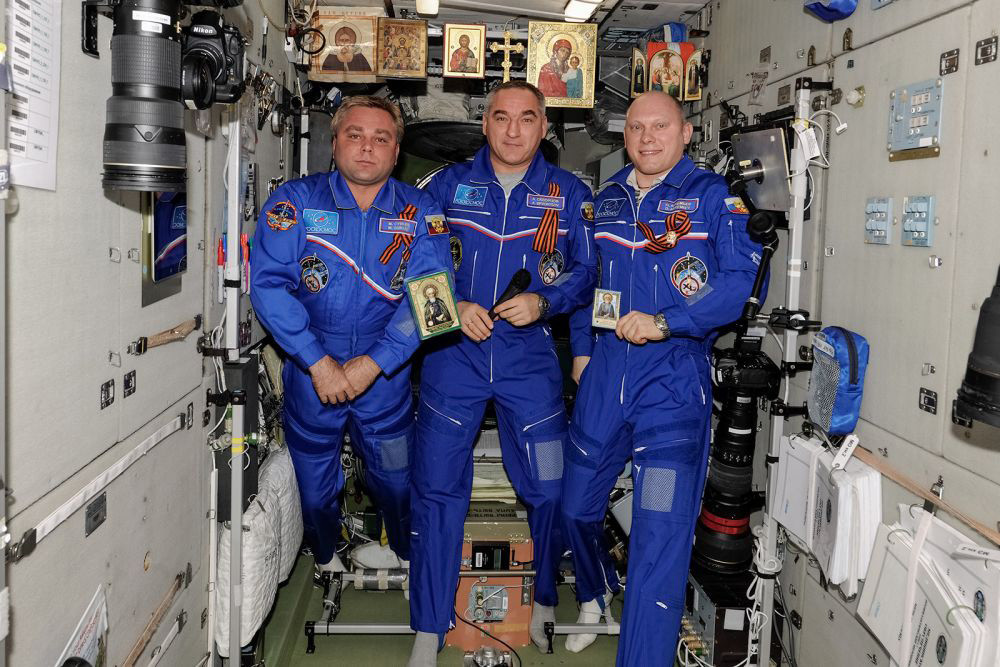 Cosmonauts pose on the occasion of the 700th anniversary of St. Sergius of Radonezh. For this particular occasion, all the icons that were on the ISS at that time were displayed. In everyday life, icons on the ISS are seen much less often.

Yet, since the religious sentiments proved hard to eradicate, authorities sometimes turned a blind eye on cosmonauts’ personal beliefs, if they could keep it to themselves. 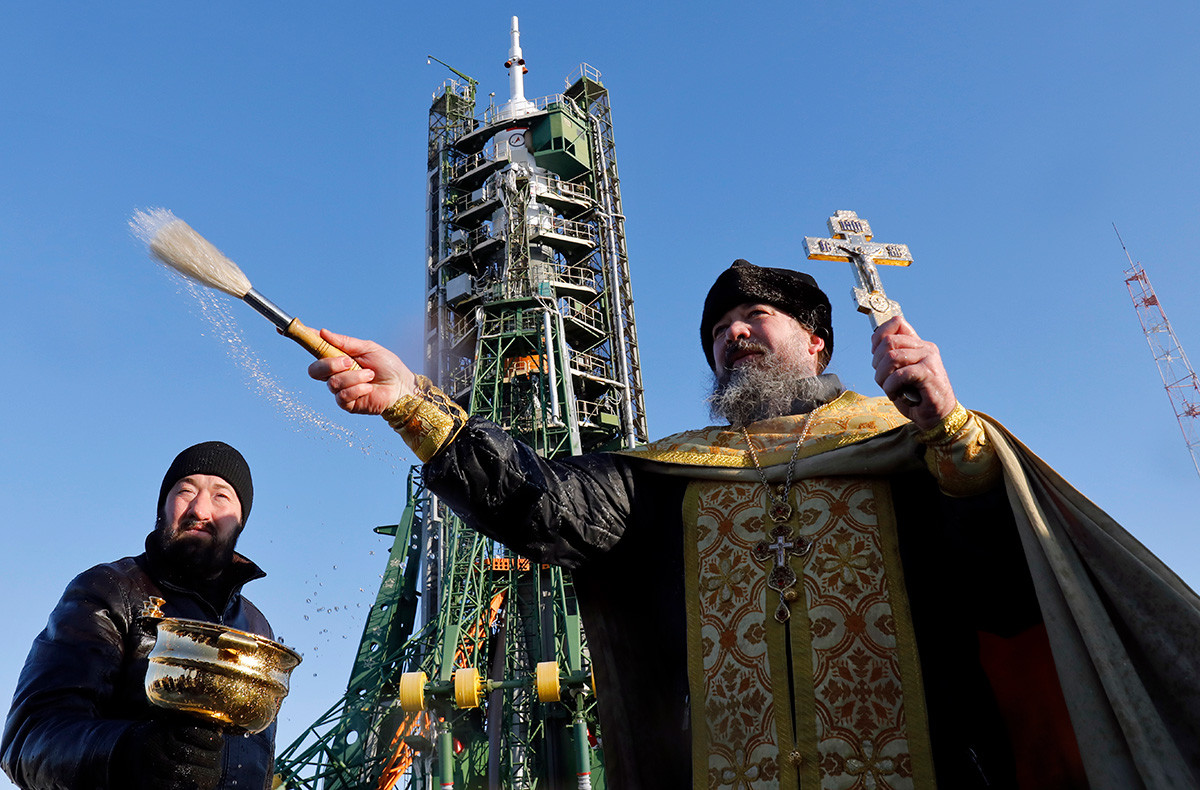 An Orthodox priest conducts a blessing service in front of the Soyuz FG rocket at the Russian leased Baikonur cosmodrome, Kazakhstan.

After the Soviet Union collapsed, some of the official atheists had a chance to open up, without fearing repercussions. Alexei Leonov, the first man to perform a spacewalk and, thus, one of the pioneers of the Soviet space program, once voiced his stance on religion:

“It is difficult to [be] in our business without faith. A cosmonaut going into orbit must know that everything will be fine. Now [as opposed to the Soviet times] it’s possible to receive a blessing from a priest, to visit a church, and many do it,” Leonov was quoted as saying. 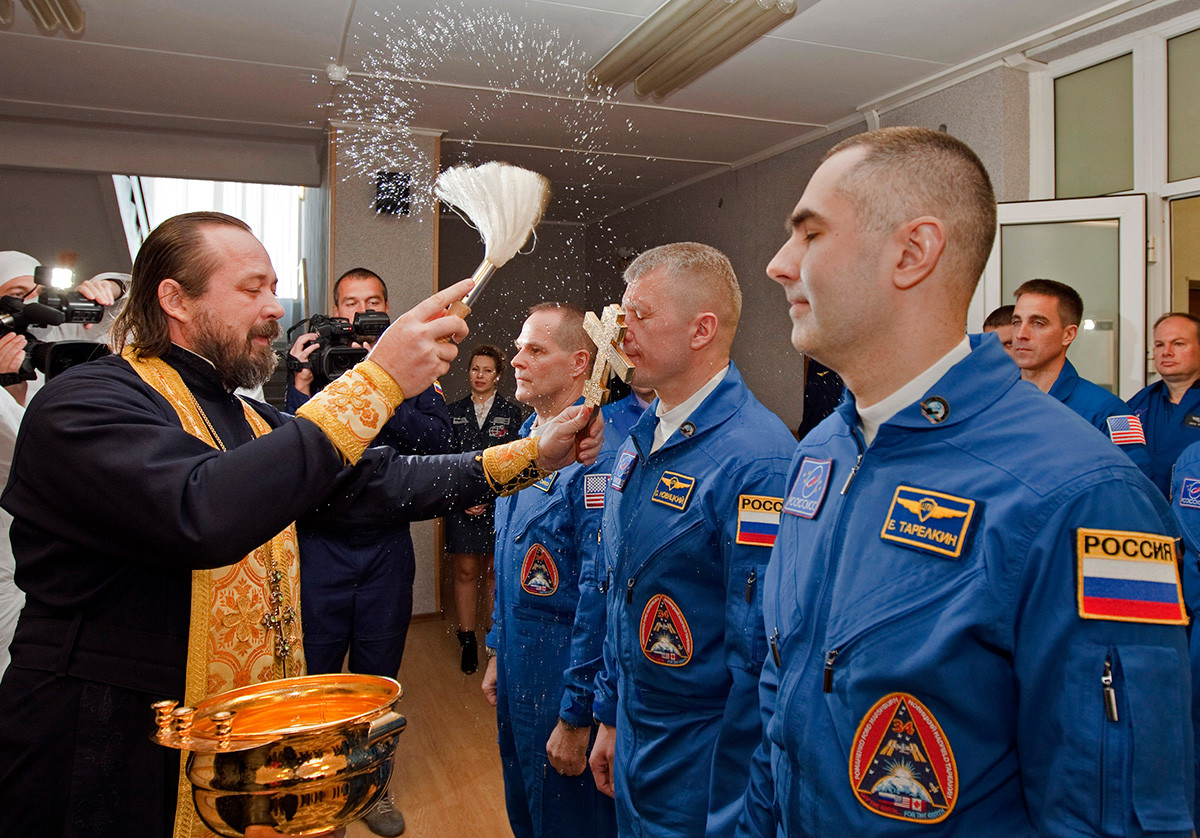 Today, a commonly accepted practice among Russian cosmonauts to take icons into space or to consecrate a spaceship before a flight would have been perceived as unimaginable defiance of Soviet ideology back in the USSR.

Click here for the story of Alexei Leonov, the first man in outer space.