How a Lenin monument ended up in Nazi Germany 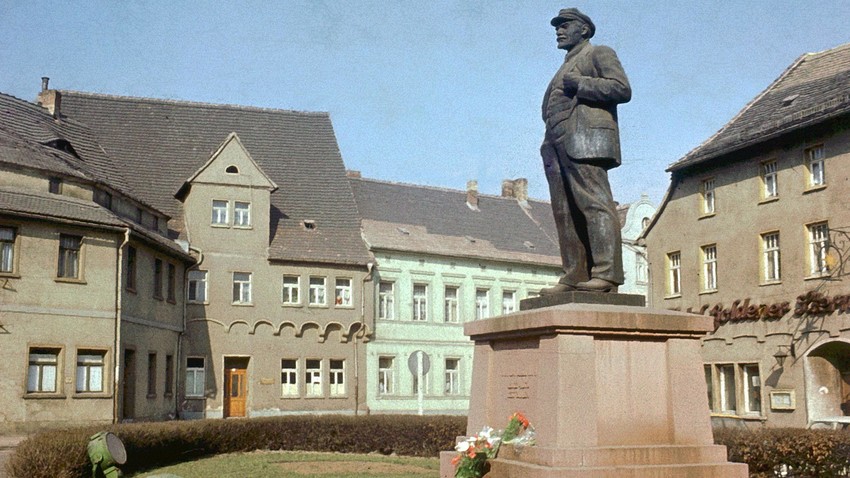 The monument in Eisleben, 1974

Dguendel (CC BY-SA 4.0)
How did a bronze Lenin statue from a St. Petersburg suburb find its way to a town in central Germany and who saved it from being melted down?

On July 2, 1945, Soviet troops entered the town of Eisleben, the birthplace of theologian Martin Luther. To their surprise, among medieval buildings in the town’s main square, there stood a monument to Vladimir Ilyich Lenin by famous Soviet sculptor Matvey Manizer (1891-1966). That was the first monument to Lenin in Germany. But how did it end up on Nazi territory? 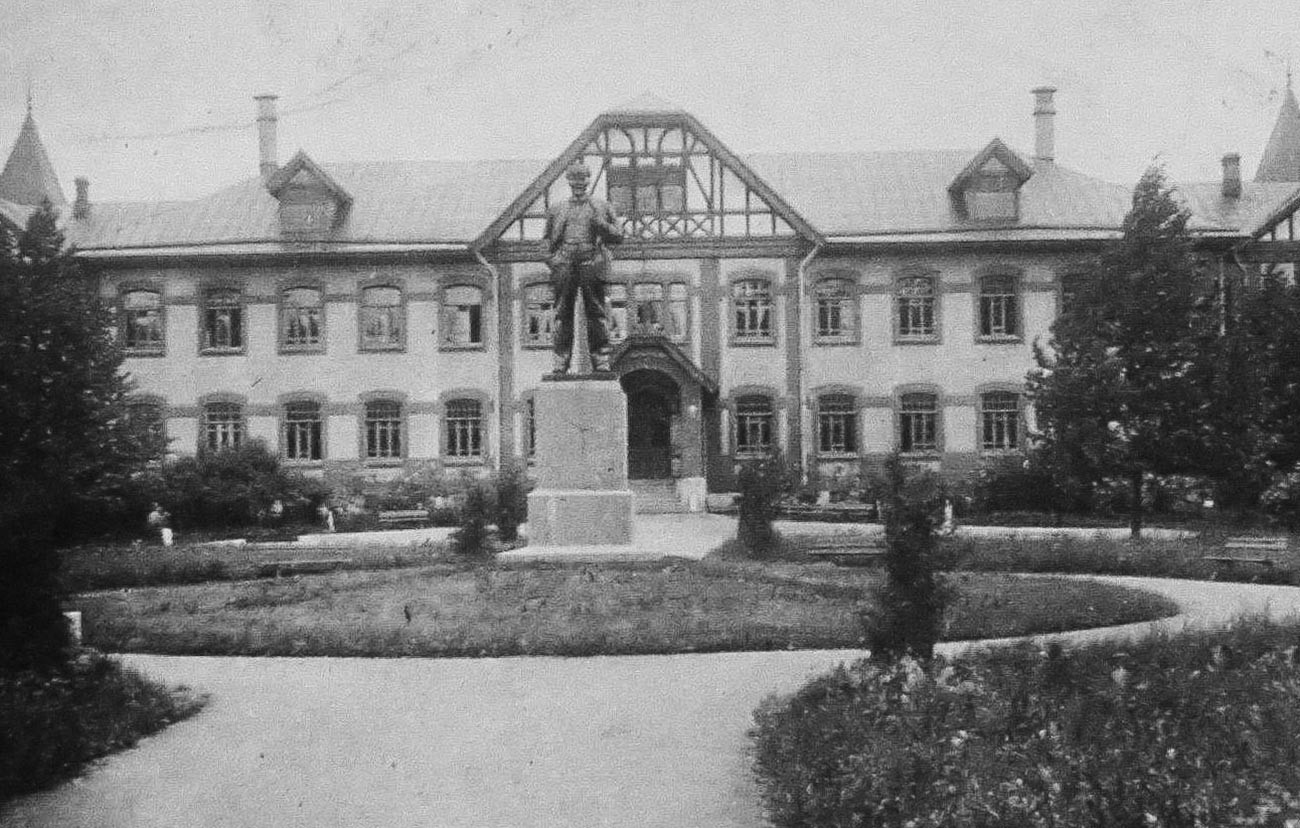 Manizer’s works are familiar to anyone who has ever been on the Moscow Metro. He is the author of the famous sculptures on the Ploshchad Revolyutsii (Revolution Square) station, including the border guard with the dog, whose nose has been rubbed by countless touches of passers-by “for good luck”. Manizer also took Stalin’s death mask in 1953.

In the 1920s, Manizer created a Lenin statue, which was replicated in several bronze casts. The familiar figure of a resolute Lenin - in a cap and a three-piece suit, his left hand gripping his waistcoat and the right hand tucked in his trouser pocket - was installed in Khabarovsk, Kirovograd (present-day Kropyvnitsky, Ukraine), and Kuibyshev (Samara). One of those monuments was also erected in Tsarskoye Selo, a town outside St. Petersburg that housed a summer residence of the Russian imperial family, which, by then, had been renamed into ‘Dyetskoye Selo’ (‘Children’s Village') in 1937, it was renamed ‘Pushkin’). The statue appeared there in 1926 outside a former nursing home for crippled soldiers, which was later converted into a trade union sanatorium (belonging to the All-Union Central Council of Trade Unions). 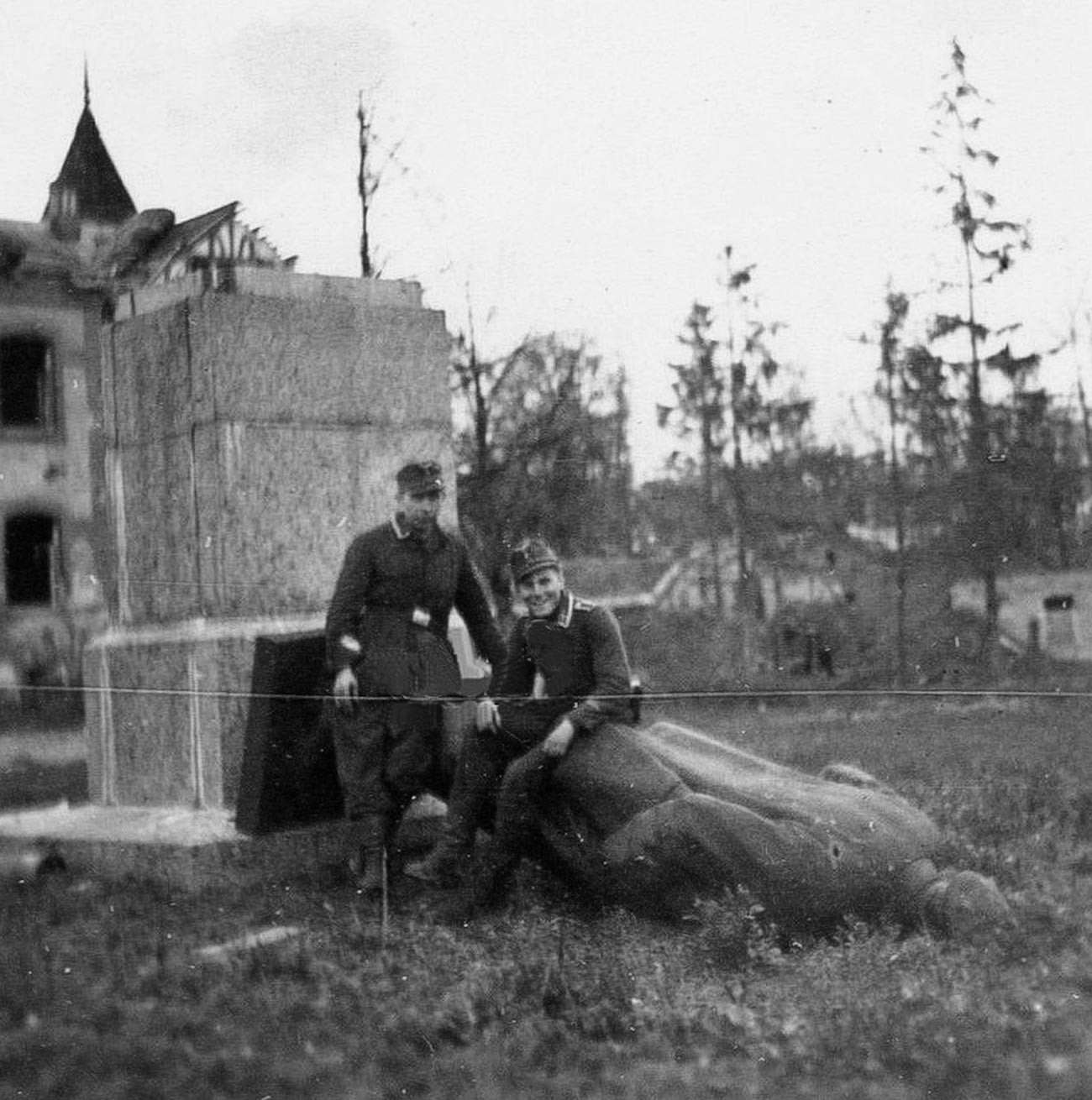 German soldiers near the toppled-down monument in Pushkin, 1941

When the Germans occupied Pushkin in 1941, they showed a great interest in the 3.2-meter-tall bronze Lenin, which weighed more than three tons. However, their interest was not so much aesthetic as practical: the statue was a source of non-ferrous metal. Lenin was knocked down from the pedestal and sent to Germany to be melted down. 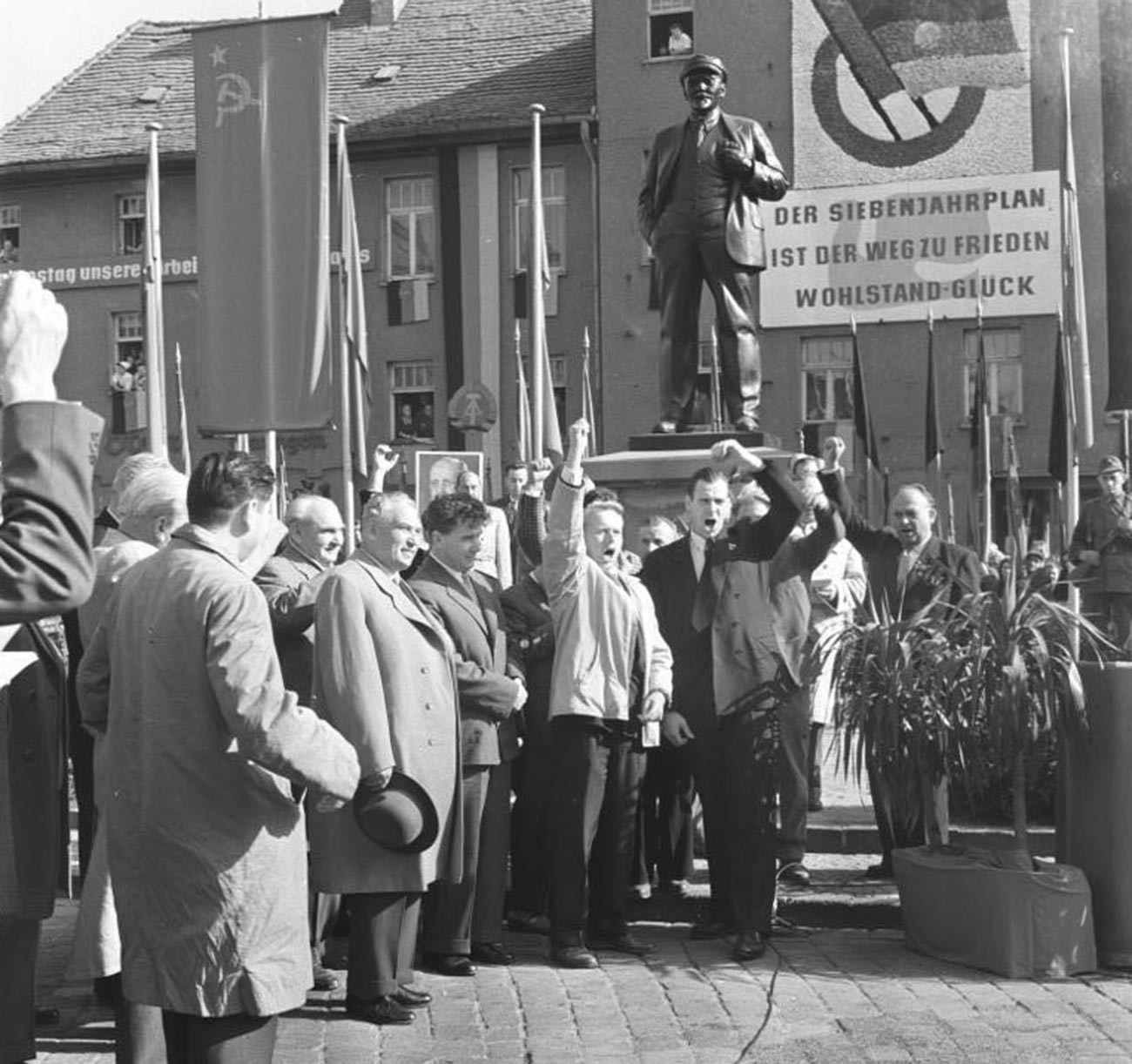 What happened to the monument next became a legend, which must have been later modified to bolster the image of the ruling Communist party of the GDR. According to the legend, wherever Reichofficials sent the monument to be melted down, there happened to be closet socialists among workers, who, under various pretexts, refused to melt Ilyich down. Finally, the monument was sent to Eisleben, to the Mansfeld AG plant, also known as ‘Krüghutte’.

The Lenin statue arrived at the plant in 1943, on a train carrying metal captured by the Germans in the USSR and so needed by the German industry for the production of weapons. It lay among dented domes, old anchors and other scrap metal. “I remember that he was lying on his back and he was easily recognizable in his cap,” Helmut Gehlmann, one of the secret socialist workers, recalled. On the same evening, the legend goes, a group of anti-fascist German workers, former communists and social democrats, as well as Soviet prisoners of war, buried the Lenin monument in the scrap yard and scattered copper shavings and other debris on top to hide the place. 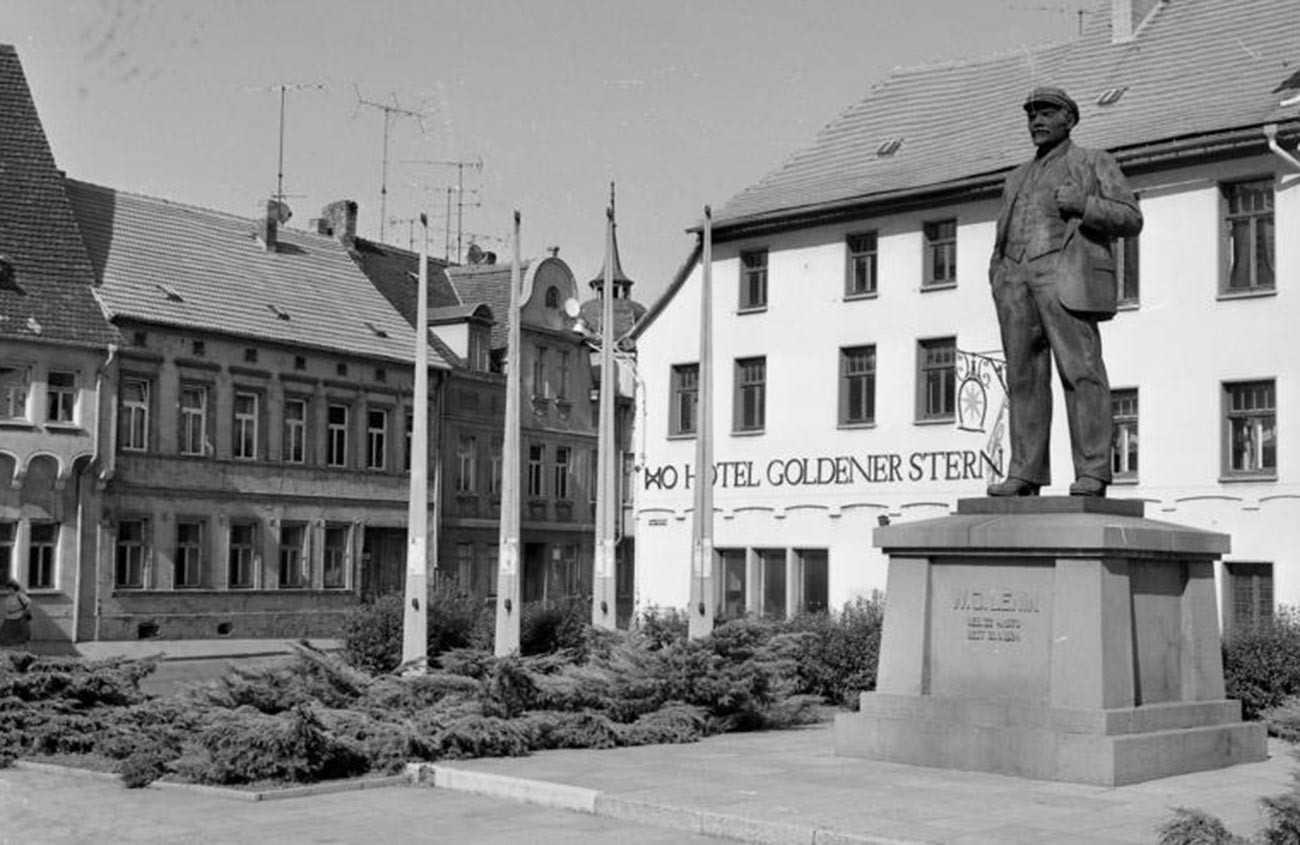 The monument shortly before transportation to Berlin, 1991

When American troops entered Eisleben on April 14, 1945 – the story continues - the workers asked the American military leadership to allow them to put the monument up in the town; however, the Americans refused and the monument remained in the ground for a couple of more months. When, in 1945, it became known that Eisleben would fall under the Soviet Occupation Zone, a decision was taken to put the Lenin statue on a pedestal, after all. When the Red Army entered the town, the soldiers were amazed to see the leader of the Bolshevik revolution gracing its main square. “Lenin came here before us,” the Russians allegedly said.

On the back of the wooden pedestal, German workers had left an inscription that said that local anti-fascists had prevented the monument from being melted down and had erected it on the town square on July 2, 1945 “in honor of the Red Army”. On May 1, 1948, the monument was officially handed over by the Soviet side to the town of Eisleben. 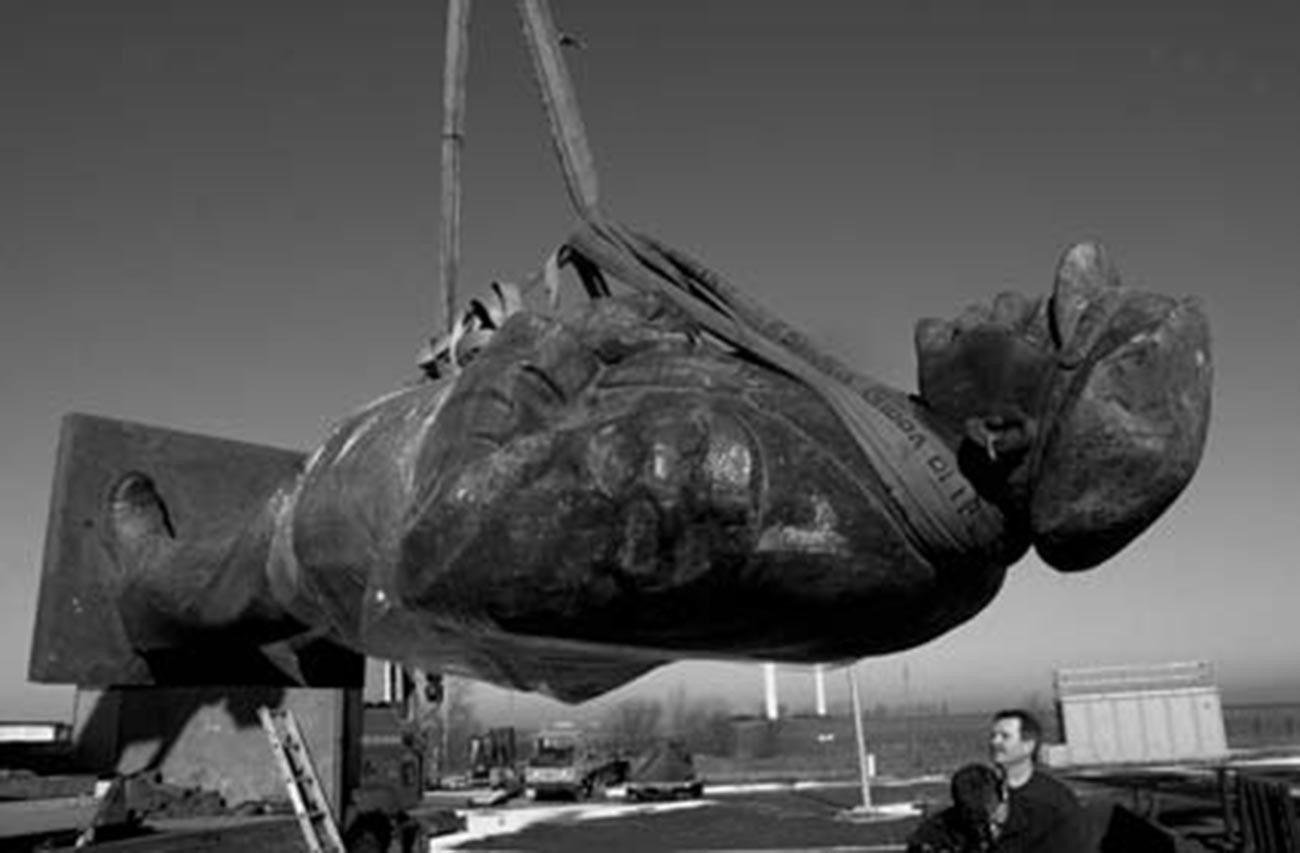 The monument being transported to Berlin, 1991. Photo by historian Andreas Stedtler

Subsequently, this remarkable legend must have been further embellished by the East German communists under Moscow’s supervision. In the 1950s, employees of the Moscow Institute of Marxism-Leninism were dispatched to the GDR to find the people who were responsible for hiding and then installing the monument.

According to German researchers, however, the workers of the plant had no intention of putting up the Lenin statue and began to do it just weeks before the Soviet army entered the city. Until then, the workers – including Helmut Gehlmann – said the monument was simply lying in the scrap yard together with other sculptures and no-one was trying to hide it. It had not been melted down, most likely, because of its size and shape, as it would first have to be cut into pieces. 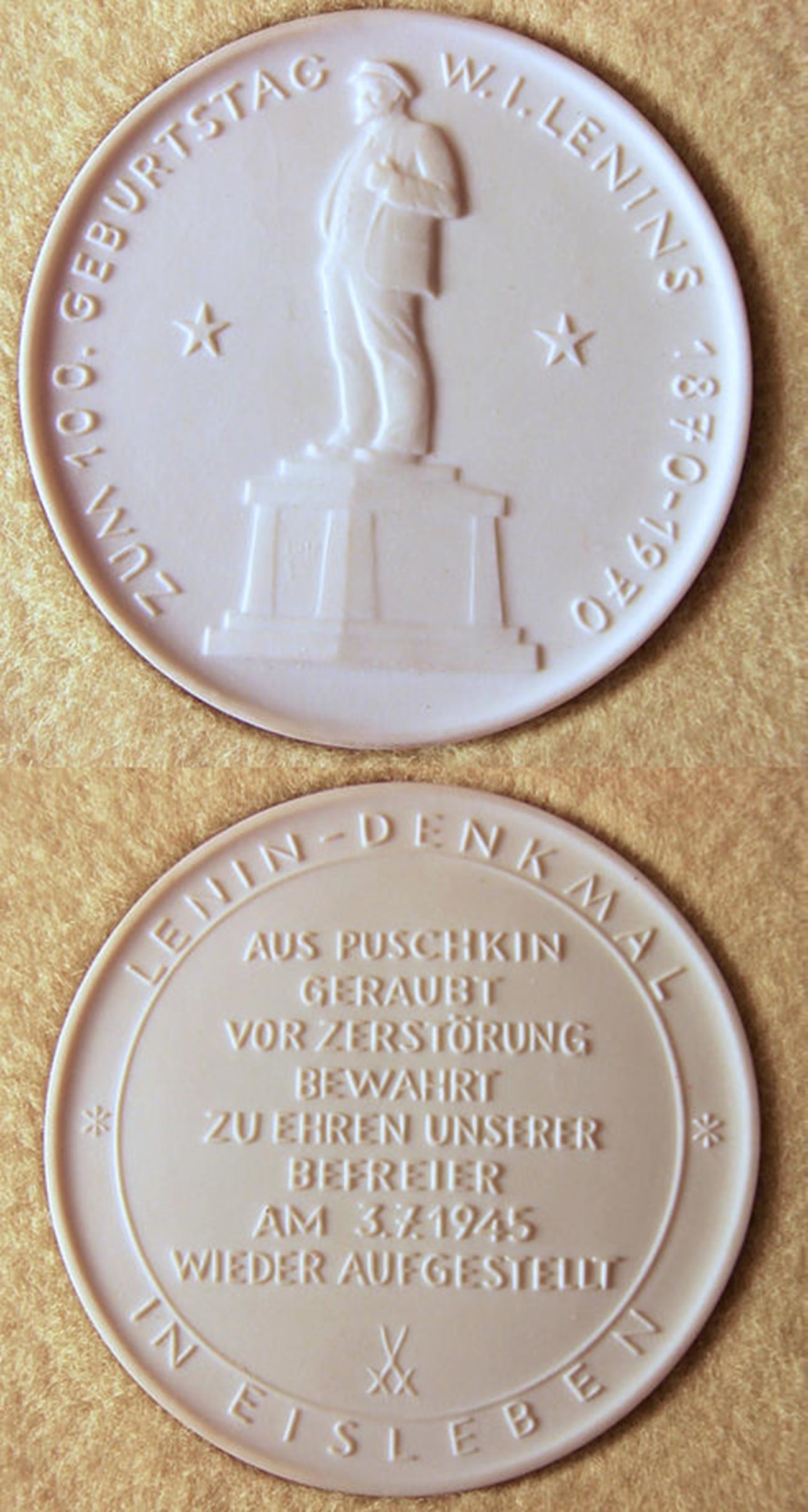 Commemorative medal (1970) made of Meissen porcelain for the 100th anniversary of Lenin's birthday, bearing the picture of the Lenin monument in Eisleben.

However, those findings would not do from the ideological point of view, so it was decided to brush this version of events “under the carpet” and reinforce the original legend, instead. In 1954, the No. 8 issue of the ‘Smena’ magazine carried a long feature telling a gripping story of how the monument had been “rescued”.

In 1958, Matvey Manizer himself visited Eisleben, as part of a group of Soviet arts and culture figures, and “unexpectedly” recognized his creation. Two years later, as if “in response”, a monument to the German communist Ernst Thälmann was sent to Pushkin and erected on the spot where Manizer’s Lenin used to stand (Thälmann’s monument has now been moved to Sofiysky Boulevard). And, in 1970, to commemorate the 100th anniversary of Lenin’s birth, a commemorative porcelain medal depicting the monument was created at the Meissen Manufactory. 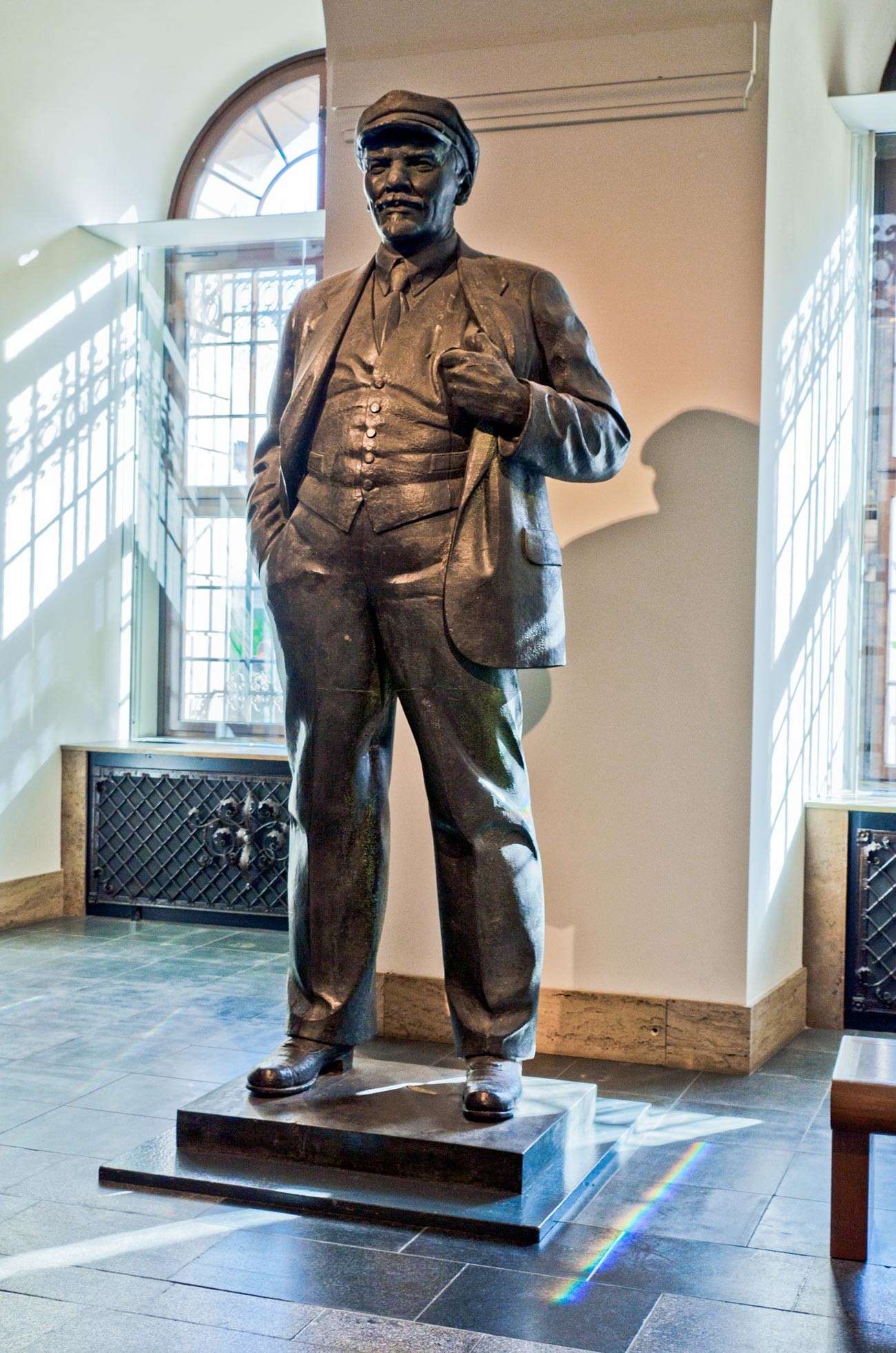 The monument in German Historical Museum in Berlin.

After German reunification in 1991, Eisleben’s Lenin was sent to the German Historical Museum in Berlin. And, in 2006, a researcher from Saxony named Andreas Stedtler published a book called ‘The Lenin Files’, in which the legend was finally debunked. “Without a doubt, the masterminds of this project had a remarkable political instinct. To erect this monument right before the Red Army entered the town was a brilliant move,” Stedtler noted in his book.