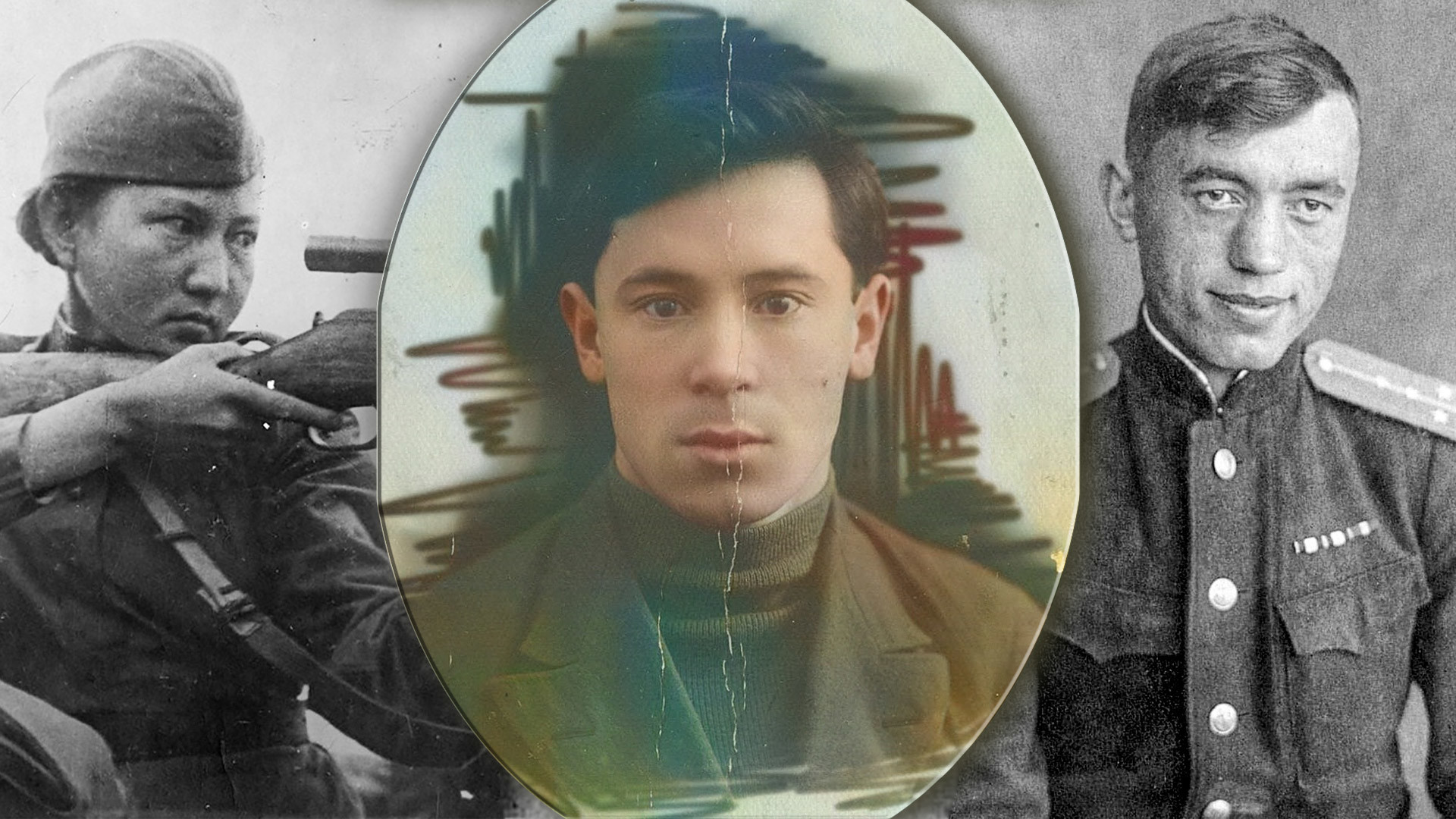 Archive photo; The State Central Museum of Contemporary History of Russia
Over 500 Muslims were awarded the title of a Hero of the Soviet Union during the Great Patriotic War.

When they came to power in Russia, the Bolsheviks proclaimed that their goal was to contribute to “the dying out of religious prejudices”. However, in many families, behind closed doors people kept their faith in God. That is why there is no surviving evidence to say for sure whether these heroes were practising Muslims or not. However, their present-day compatriots are convinced that, at heart, those war heroes were true believers. 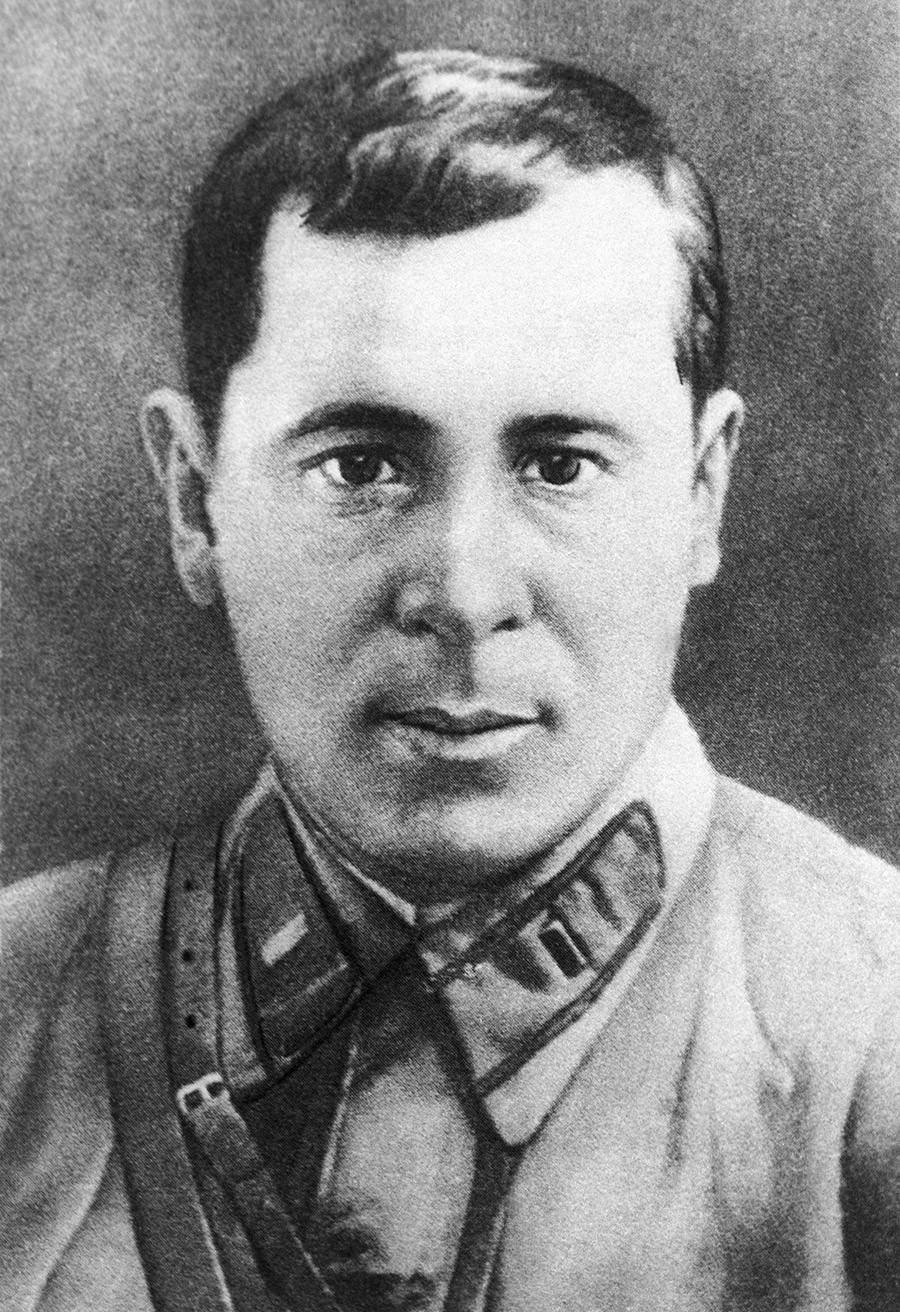 A famous Tatar poet and war correspondent, Musa Jalil even attended a madrasah at one time, which, however, did not prevent him from joining the Young Communist League (the Komsomol) later on and, during the war against Nazi Germany, becoming a political instructor with the Red Army.

For a long time, Jalil was considered a traitor in the USSR, who had betrayed his motherland. Having been captured in 1942, he soon joined the so-called Idel-Ural Legion created by the Germans. That military unit brought together Red Army prisoners of war from among representatives of the peoples of the Volga region (Tatars, Bashkirs, Mordovians, Mari, Chuvash and Udmurts) who wanted to fight against Bolshevism.

Jalil’s true goal, however, was not to fight for the Third Reich, but to destroy the Idel-Ural Legion from within. He became one of the key members of an underground cell that was set up within the legion to carry out active propaganda work among its members. The Germans entrusted Musa with driving around PoW camps and conducting Nazi propaganda there. In reality, he used this opportunity to recruit new members to the resistance.

As a result of the underground activists’ work, the very first Idel-Ural battalion that was sent to the combat zone killed its German officers and almost in full went over to the partisans. The remaining six battalions also had a large proportion of their members having been successfully targeted by resistance propaganda and were, therefore, considered not combat worthy and extremely unreliable.

Musa Jalil was arrested in August 1943 and a year later guillotined. His name was cleared after the war and, in 1956, he was posthumously awarded the title Hero of the Soviet Union. 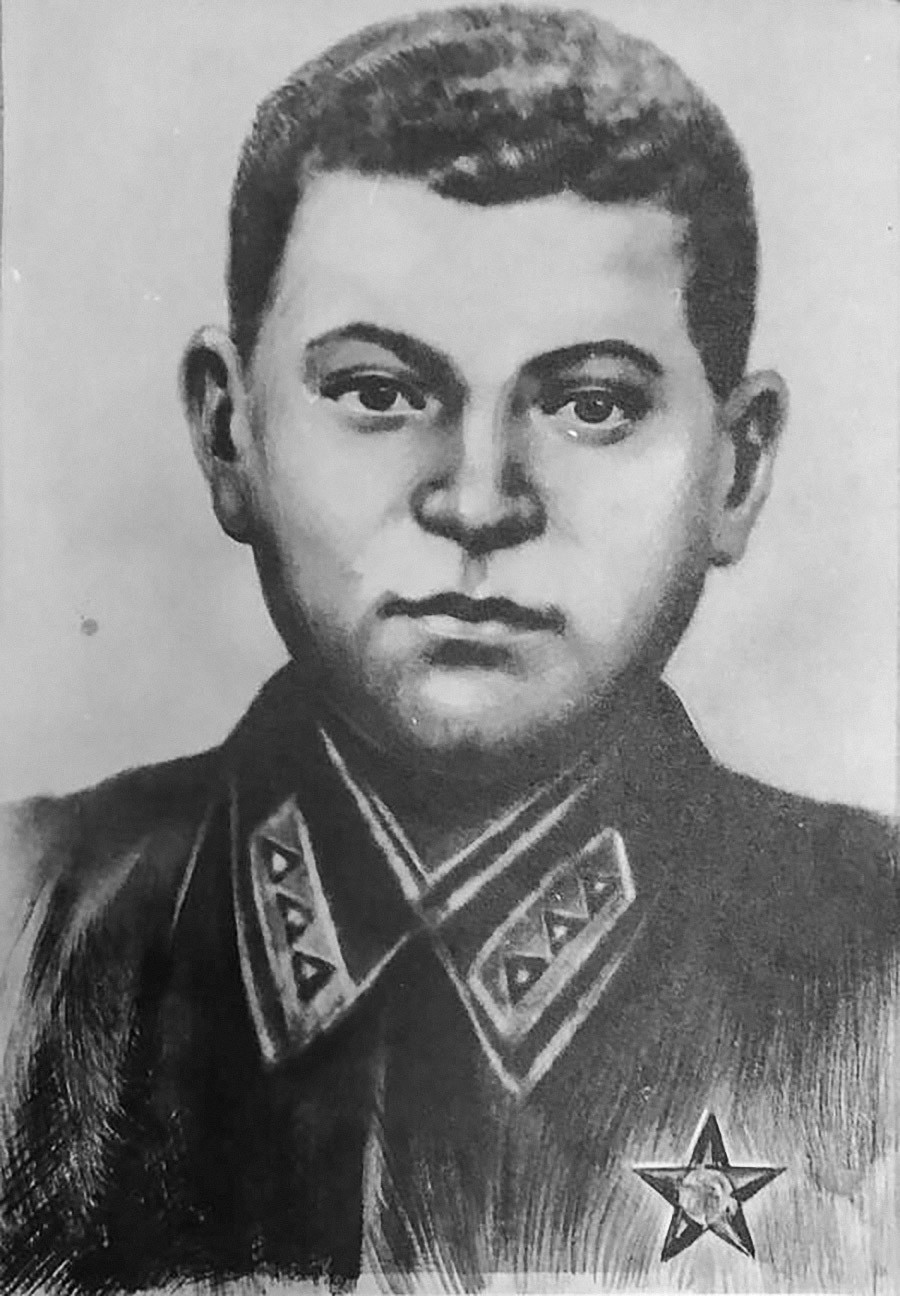 Khanpasha Nuradilov fought in the war for just over a year, but in that short time, he managed to become famous throughout the Soviet Union. Having killed a total of 920 German soldiers, the young Chechen became the most effective machine gunner in the Red Army.

More than once, Nuradilov was wounded in fighting and remained the only surviving member of his machine-gun crew, but he always fought to the last, inflicting tangible losses on the enemy. After just one battle near the Ukrainian village of Bayrak in the spring of 1942, the commander of a cavalry squadron that Khanpasha was tasked with providing fire cover for counted more than 300 German soldiers killed by the Chechen’s machine gun.

Nuradilov, who had just turned 18, was killed near Stalingrad on September 12, 1943. The following year, he was posthumously awarded the title Hero of the Soviet Union. 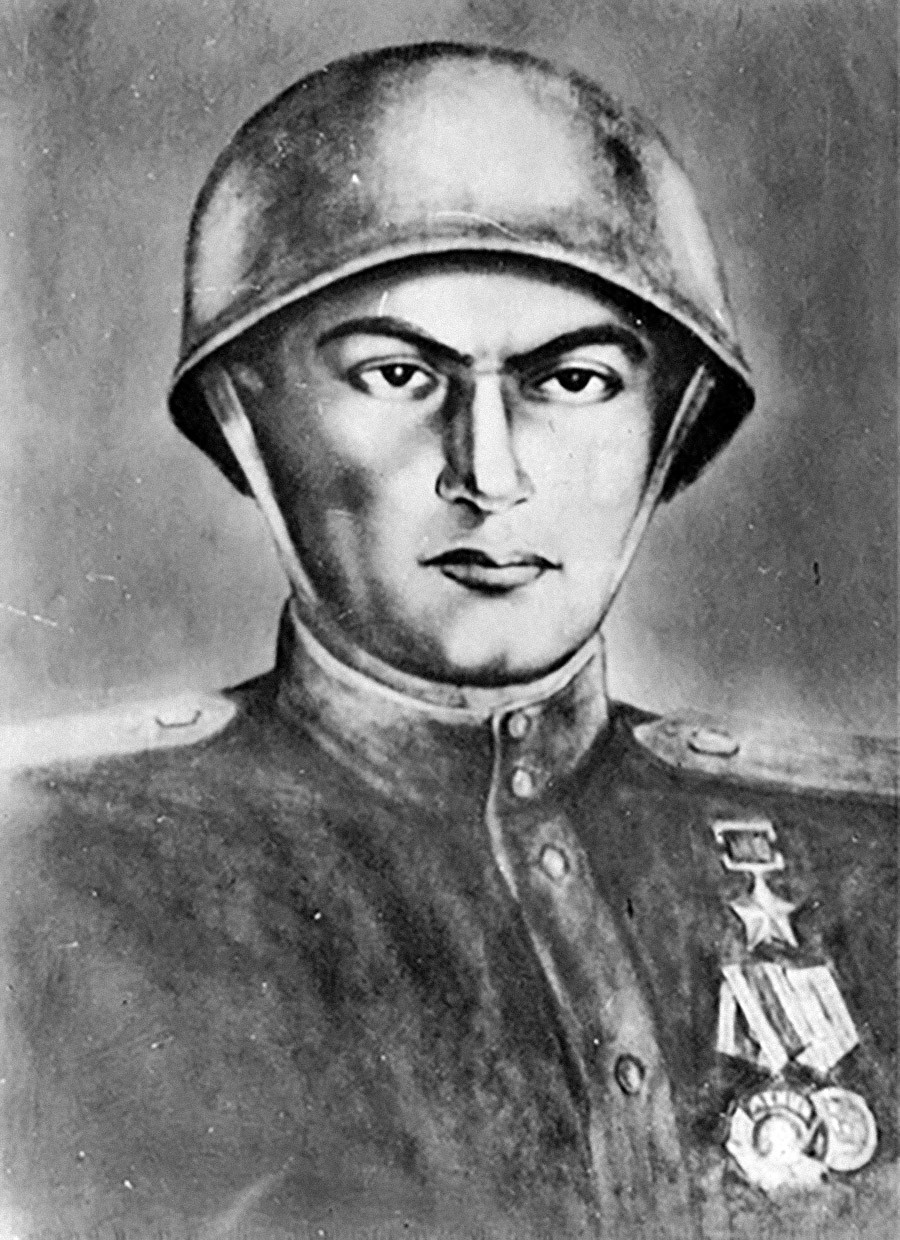 A native of the Tajik Soviet Socialist Republic, Junior Sergeant Domullo Azizov contributed to the success of one of the Red Army’s most important operations in World War II, namely, the crossing of the Dnieper River in the fall of 1943.

On October 15, under heavy enemy fire, Azizov was crossing the river in the Loyevsky District of Belarus with one of the first landing groups. Before his boat reached the shore, Domullo jumped out of the boat and - up to his waist in water – quickly made his way to the land and burst into German trenches. Having destroyed an enemy machine-gun crew with a grenade, Domullo turned the machine gun towards the enemy and withstood German fire until reinforcements arrived.

However, just nine days later, Hero of the Soviet Union Domullo Azizov was killed in fighting for Belarus’s Gomel Region and was buried in a mass grave there. 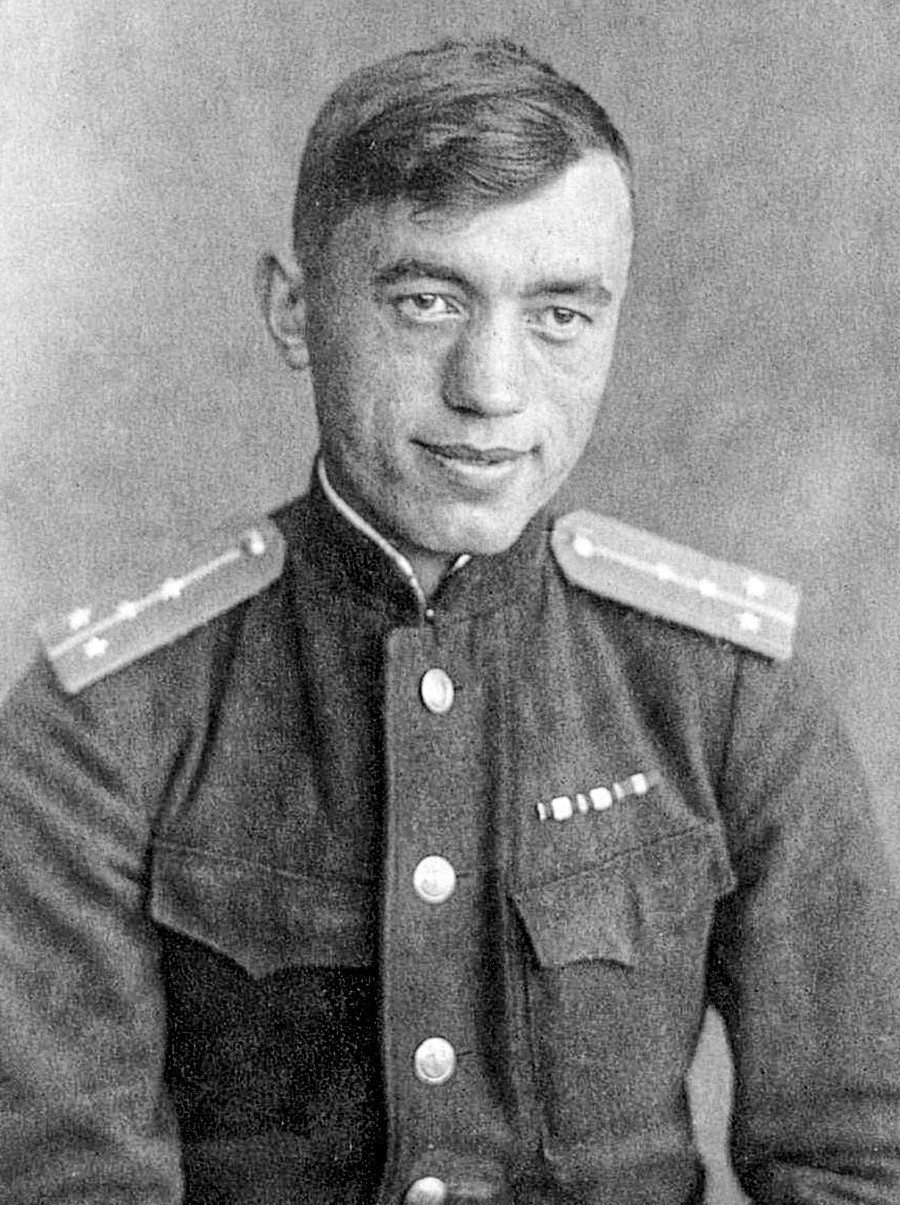 Soviet newspapers called him a “brave heart” and a “legendary man”. An ethnic Kumyk (a Turkic-speaking people living in Dagestan), Yusup Akayev was one of the most famous Black Sea Fleet aviation pilots.

On his “flying tank”, an Il-2 attack aircraft, he performed 104 sorties, destroyed 18 ships of various types, three locomotives, 11 tanks and many other items of enemy hardware.

Akayev attacked enemy ships not by diving on them from high up, but by flying up to them at ultra-low altitudes. Once near them, he dropped his bombs and then took his aircraft sharply up. This method of bombing was fraught with great risks, but at the same time was highly effective.

Yusup Akayev became one of the few attack pilots who managed to emerge victorious from an unequal air battle against two enemy fighters.

Hero of the Soviet Union Akayev lived to see victory in World War II, but did not have many years to live afterwards to fully enjoy a peaceful life. The injuries sustained during the war undermined his health, and he died in 1949, aged just 27. 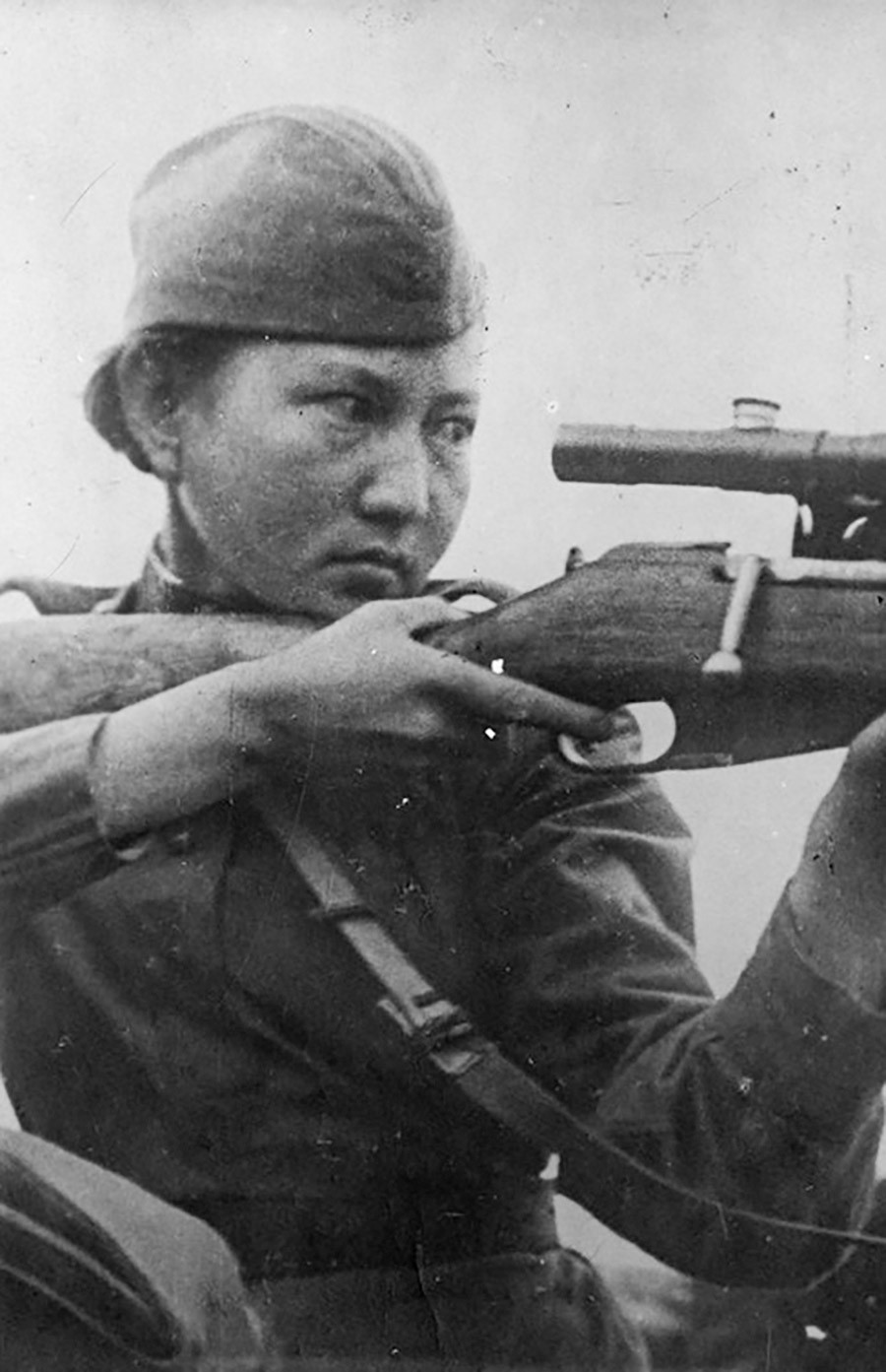 Another Hero of the Soviet Union, Aliya Moldagulova from Kazakhstan, graduated with honors from the Central Sniper Training School for Women and killed several dozen enemy soldiers. However, she became famous not as a sniper.

In her last battle, which took place in Pskov Region in January 1944, Aliya assumed a role that was quite unusual for a sniper. After the company commander was killed, with a stirring call “For the Motherland! Forward!” she raised her fellow soldiers to attack and was the first to break into the enemy’s trenches.

Having been wounded by a mine fragment, Aliya Moldagulova even engaged in hand-to-hand combat. However, yet another wound that she sustained in that fighting proved fatal for the 18-year-old girl.