History
Yulia Afanasyenko
The first pavilions of VDNKh were expected to stand for just 100 days, before Iosif Stalin extended this time up to five years and then made them a permanent fixture, so many buildings were reconstructed or reenforced. Nowadays, they are replaced or demolished. What did they look like? 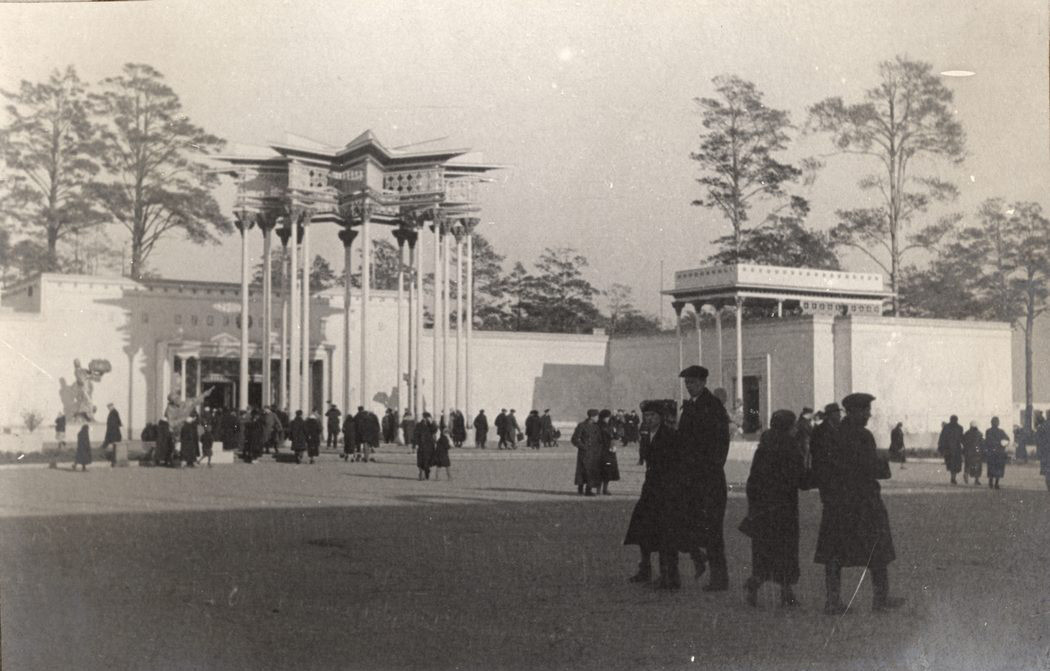 The pavilion representing Uzbek SSR was created in 1937 to host the industries exposition of the republic. The wooden building was decorated with national-styled carving and painting by the best Uzbek artists. It had a fountain, four bronze-plated plaster statues in the yard and a light star-formed rotunda. After World War II, the building was dismantled because it was in a state of disrepair. 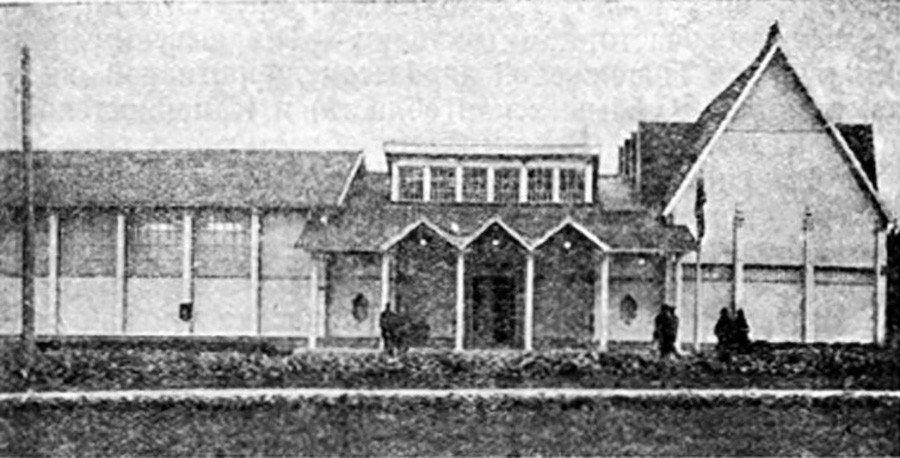 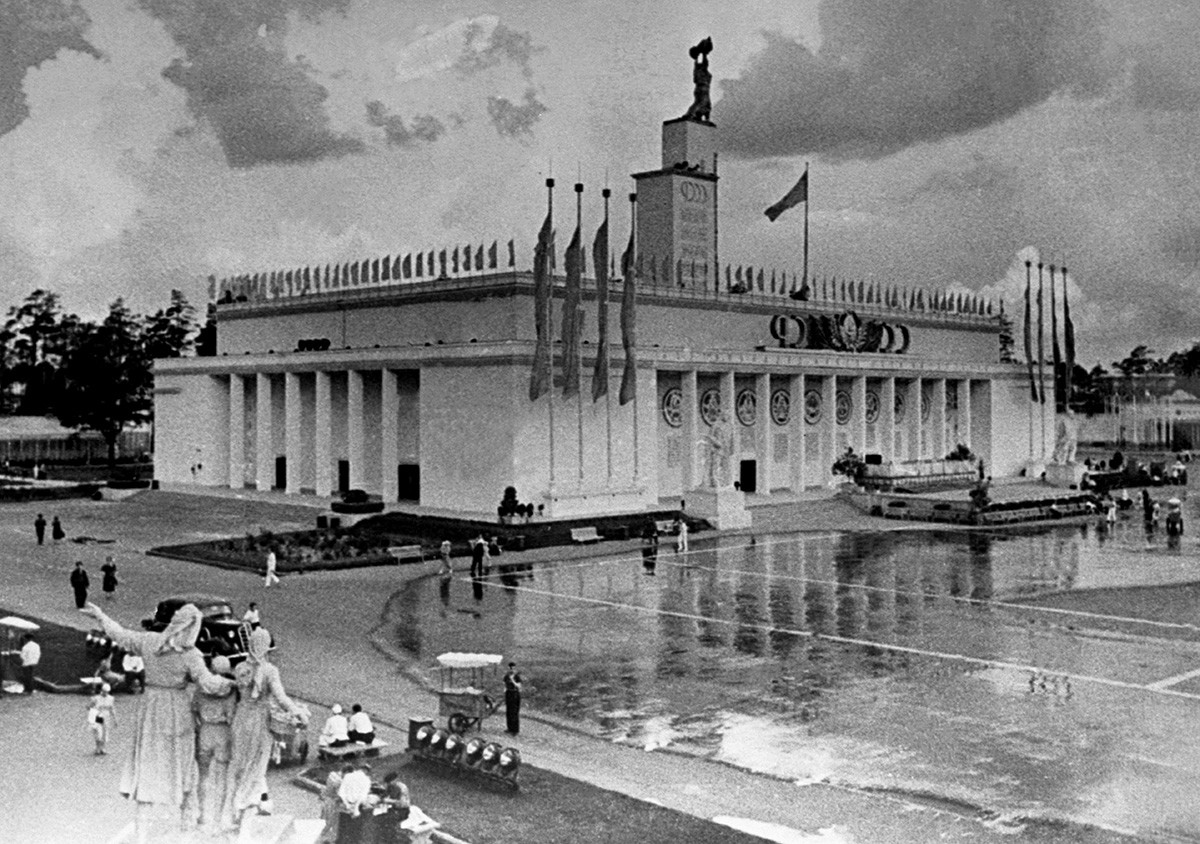 The Main pavilion that opened in 1939 was a big strict building with letters ‘СССР’ (“USSR”) on the front. It had a tall tower with the sculptures of a tractor driver and a kolkhoz (farmer) woman on the top. The Main pavilion was designed to be a preamble to all the expositions within the VDNKh complex. The building was even reconstructed to make it more durable before its opening. 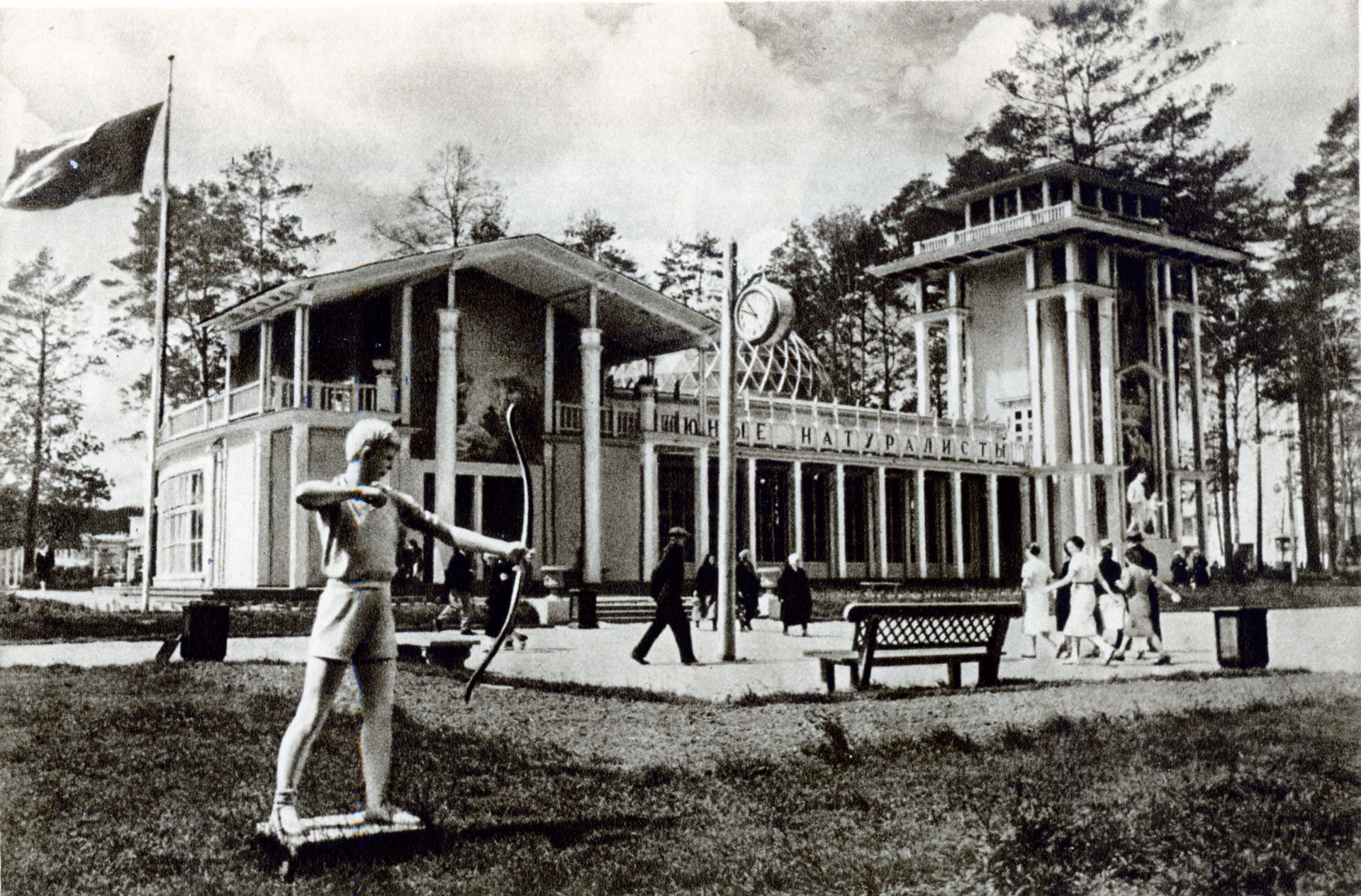 The ‘Young Naturalists’ pavilion was, in 1939, surrounded by tall pines giving a lot of shadow. This white building had a tower and covered arcades. The exposition demonstrated how Soviet pioneering taught the schoolkids to learn and work and there were also many specimens of cultivated plants and a lot of different equipment exhibited. 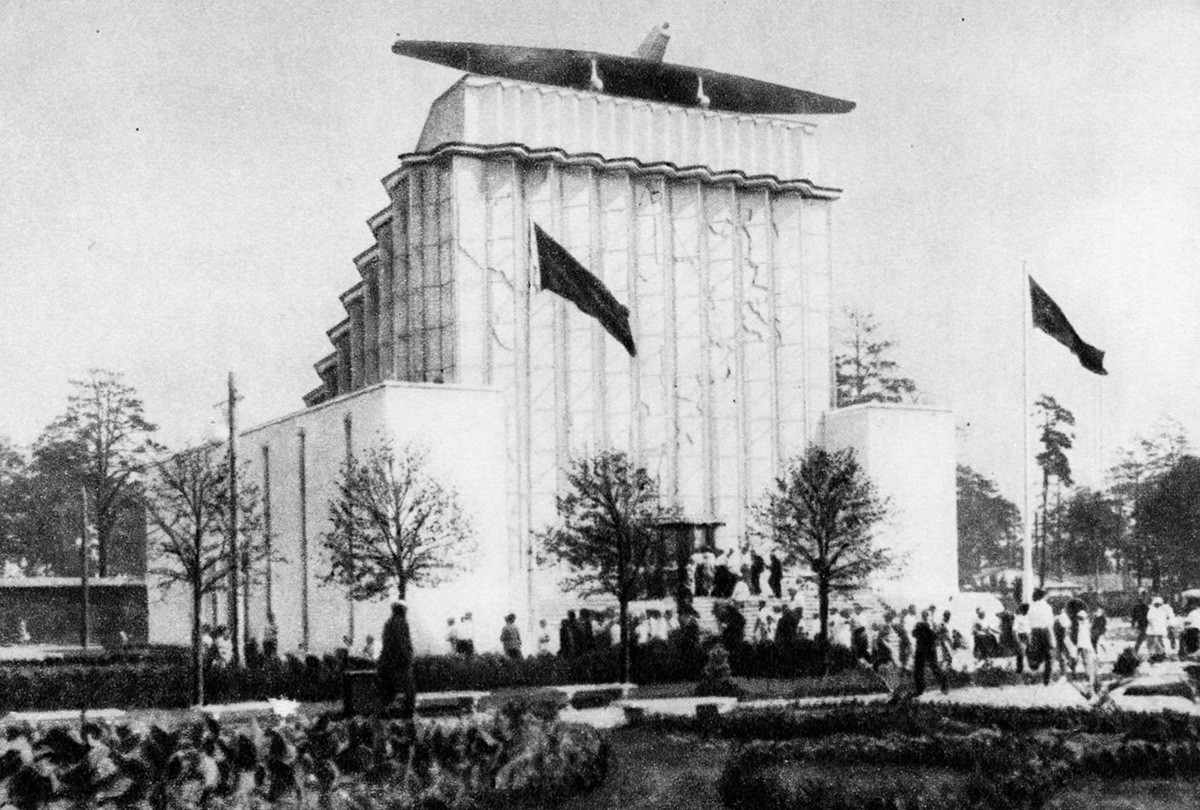 When the wooden ‘Soviet Arctic’ pavilion was opened in 1939, the front of the building was decorated with a map of the Arctic depicting the drifting station of explorer Ivan Papanin. The pavilion also had a full-scale model of a polar expedition plane on the top. Inside, visitors could learn how the Arctic was being explored. In 1940, it was decided to refurbish the pavilion for the Karelo-Finnish SSR exposition. 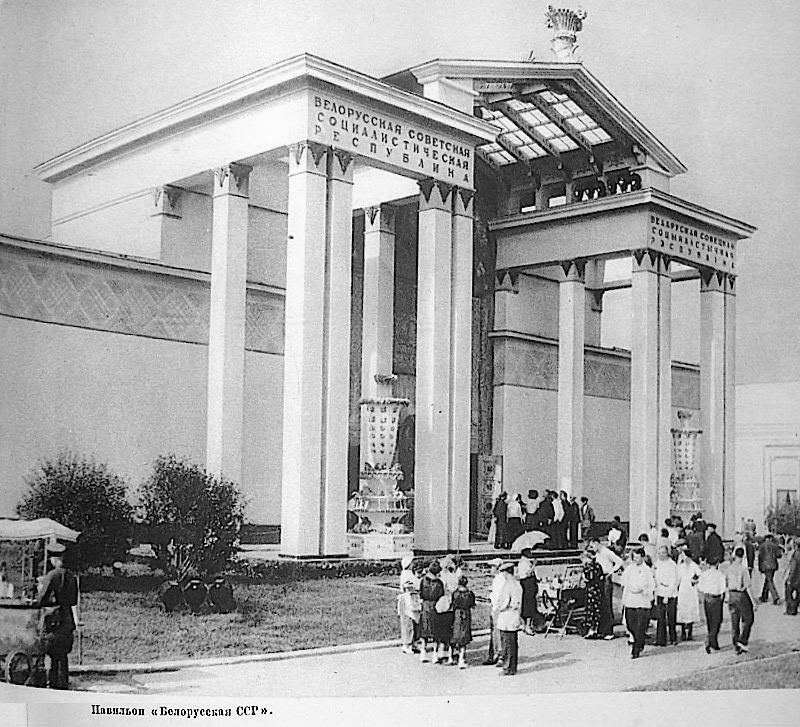 The first pavilion representing Belarus SSR was a light spacious building with two side porticos. The building was decorated with carved and painted national ornaments. Near the entrance were two huge bright vases and sculptures of a frontier guard and a kolkhoz girl. The main themes of this exposition were border control and agriculture. 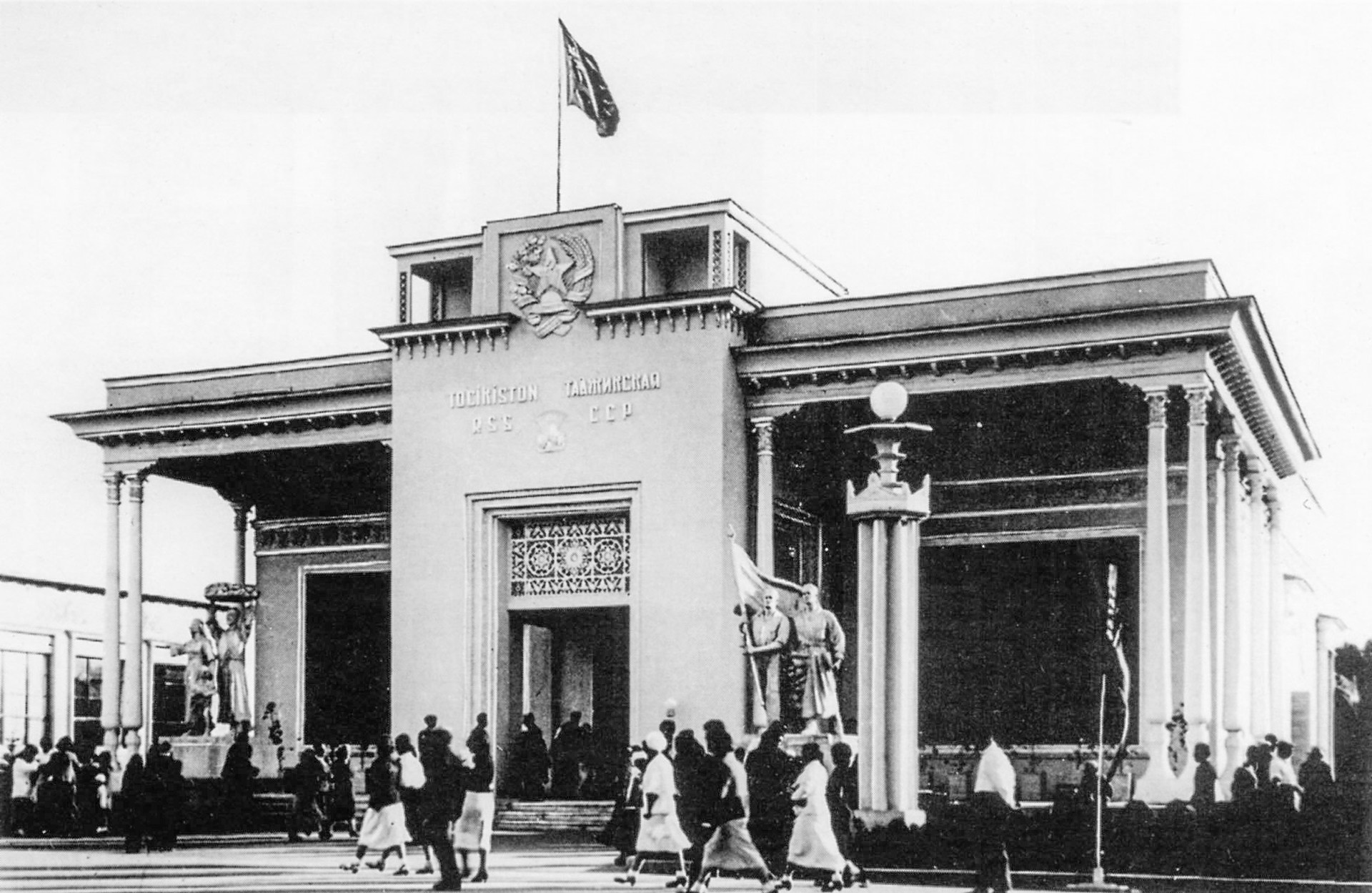 The Tajik SSR pavilion was one of the smallest. It was wooden with beautiful national carvings and statues. The building consisted of five halls decorated in different styles, ranging from Moresque to constructionism. The exposition was dedicated to different industries and to the ‘udarniki’ (“shock workers” - workers performing especially arduous or urgent tasks). After WWII, the pavilion turned out to be really run down. 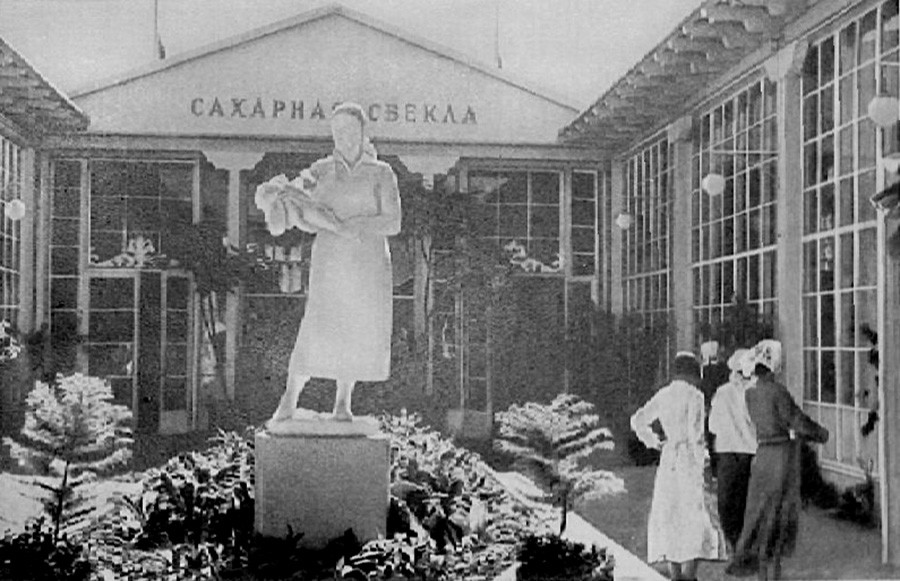 The ‘Sugar beet’ pavilion had huge windows and a front yard with a small garden and a statue of a shock worker. The exhibition was dedicated to the sugar beet industry and the experience of shock workers. There also was a small cinema with a collection of documentaries. In 1954 a new building appeared in place of this one. 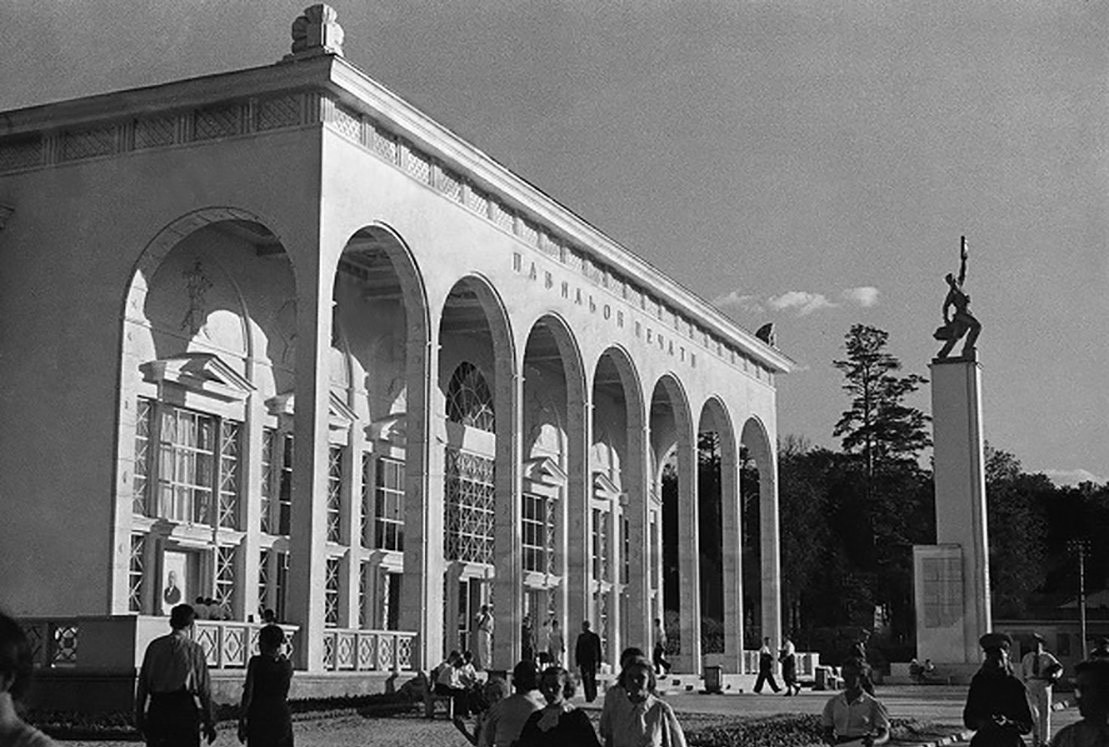 The ‘Press’ pavilion was built in the Stalinist empire style as a building with a portico with pillars. In front of the pavilion was an obelus topped with a statue of a worker holding a book about the Soviet Communist Party history. The exposition was dedicated to Russian classical literature and the peasant press. In 1954, the building was demolished. 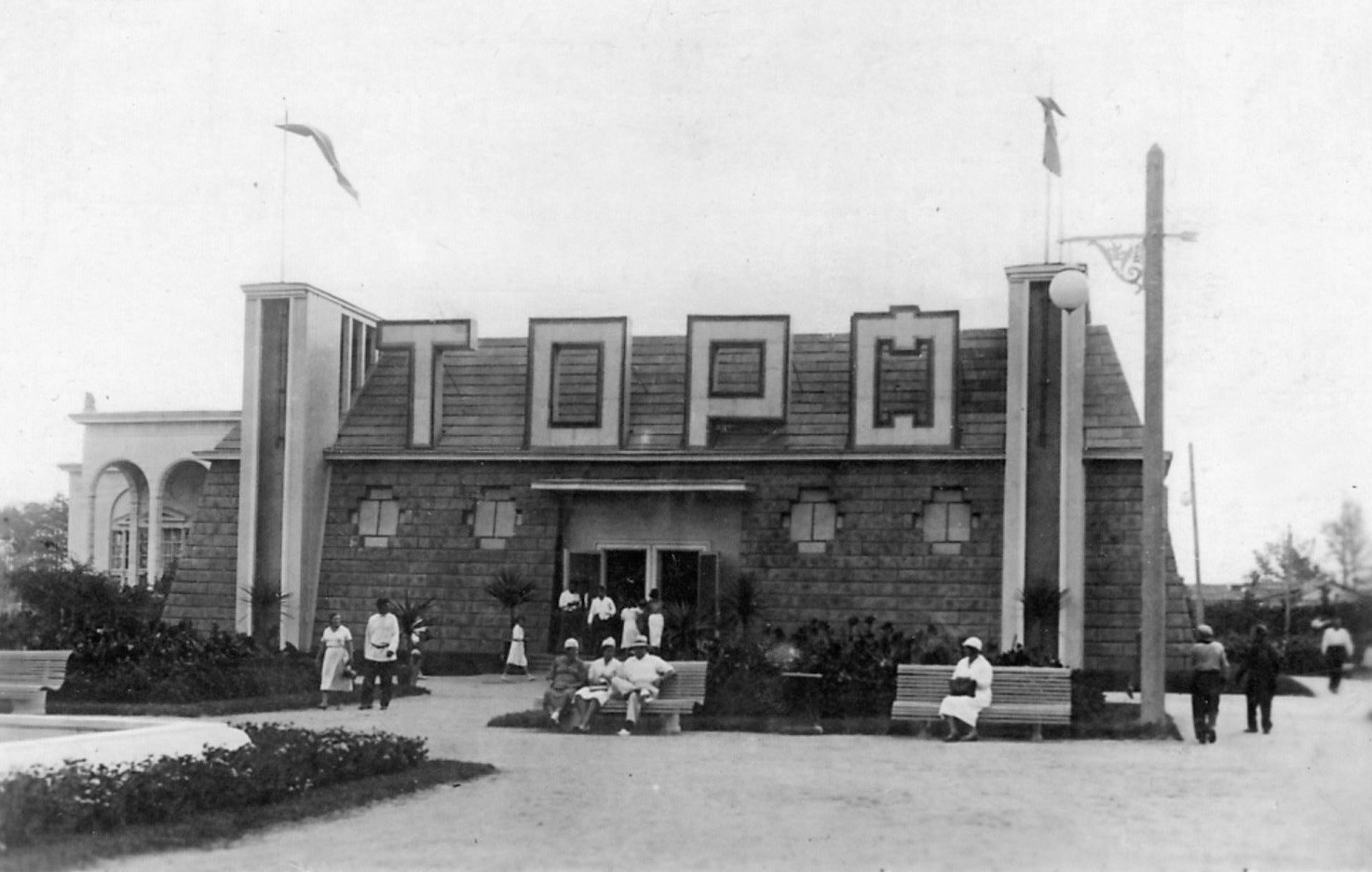 The ‘Peat’ pavilion was also very small. It was designed like a real clamp of peat and decorated with four huge letters spelling: ‘ТОРФ’ (“PEAT”). Some space near the pavilion was taken to display the machines used in peat digging and melioration. The exposition and the records of shock workers on display were to inform Soviets about the ways to use the resource. In 1951, the exposition got a new building. 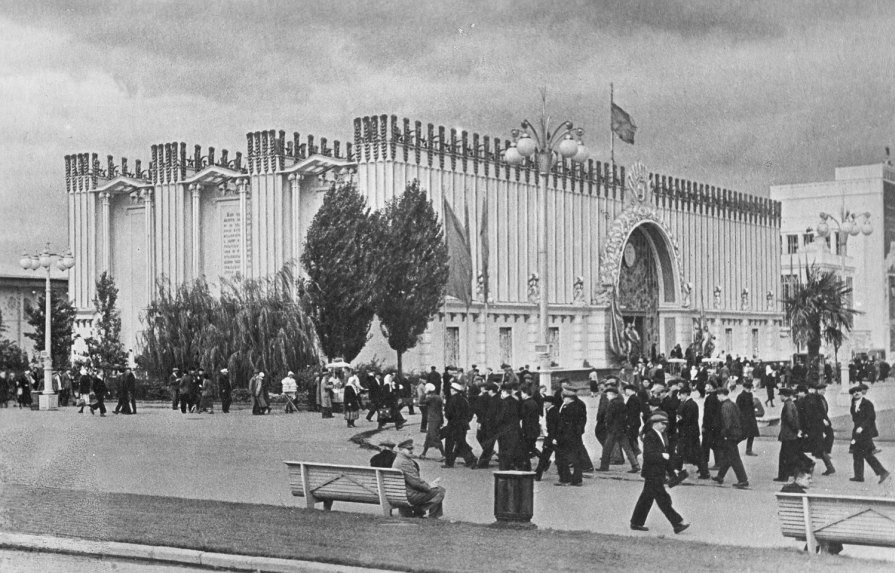 The Ukrainian SSR, at first, built a wooden pavilion styled as a peasant house, but Khruchev himself disliked the building. The final version resembled Kievsky railway station. The entrance was decorated with a wreath of fruits and a vitrage. The exposition showed the different agricultural and scientific achievements of the republic. 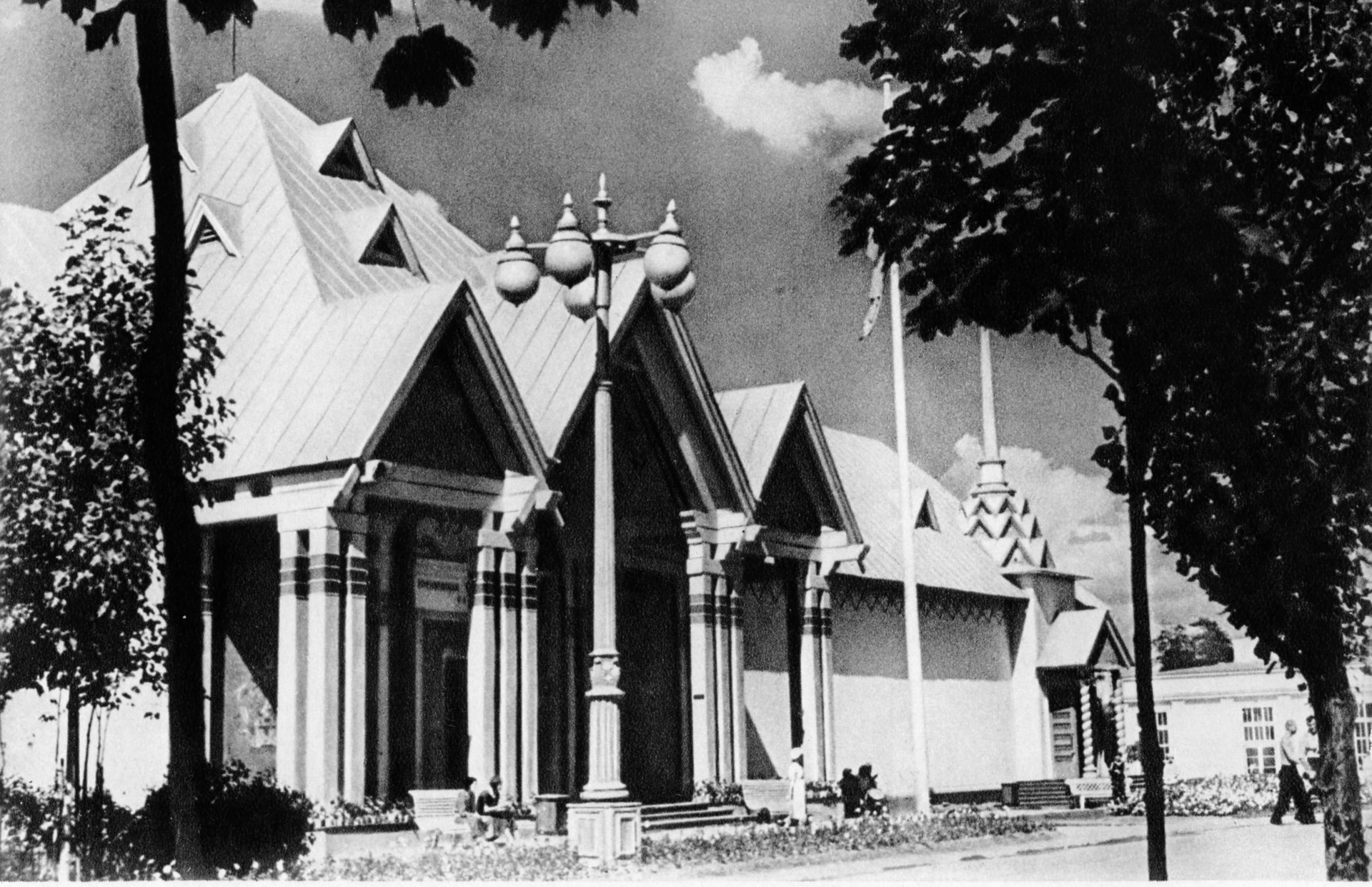 The wooden pavilion dedicated to the Voronezh, Kursk and Tambov regions was opened in 1939. It had two painted tent-roofed door steps and a small tower with a spire. It was decorated with colorful Russian ornaments - a tribute to the national wooden architecture. The exposition showed the particularities of nature and industries of the region. 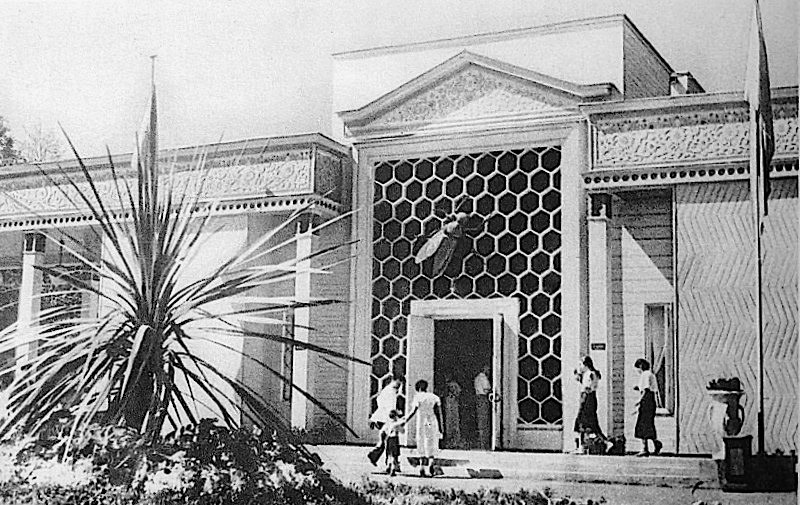 The ‘Bee-keeping’ pavilion didn’t have any naming on its front, as its appearance spoke better than words. The central part of the building was decorated with a huge honeycomb and a large metal bee above the entrance. The pavilion also had a bee garden housing 45 families of Caucasian bees. The exhibition explained the technologies of getting and using honey. 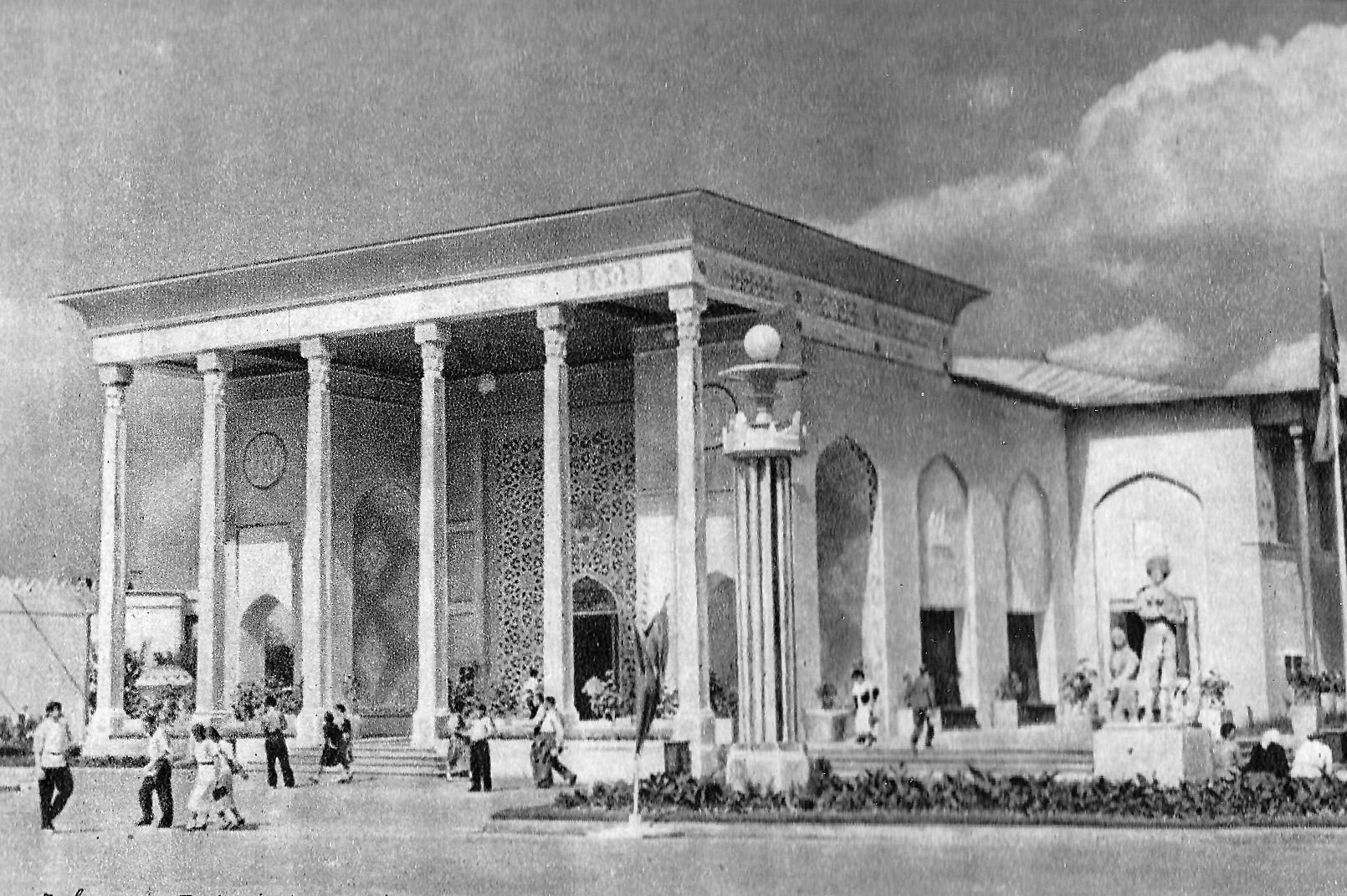 The Turkmen SSR pavilion looked very airy, as it was designed as a building with wide covered arcades. It was richly decorated with painted floral ornaments, carvings and vitrages. The exposition showed the nature, culture, industrial achievements and the peasant life of the republic. 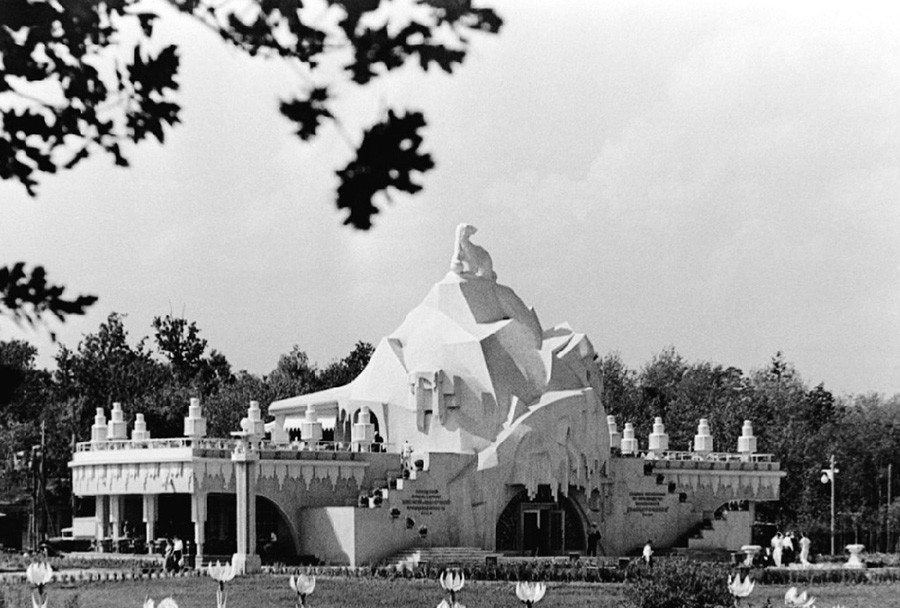 The ‘Glavhladoprom’ (“Main Administration of Refrigeration Industry”) pavilion was one of the most unusual buildings of the complex. It was built as an ice mountain with terraces and a polar bear statue on the top. The pavilion educated visitors about Soviet milk products and the ice cream industry. After WWII, the exposition was moved to a new building. 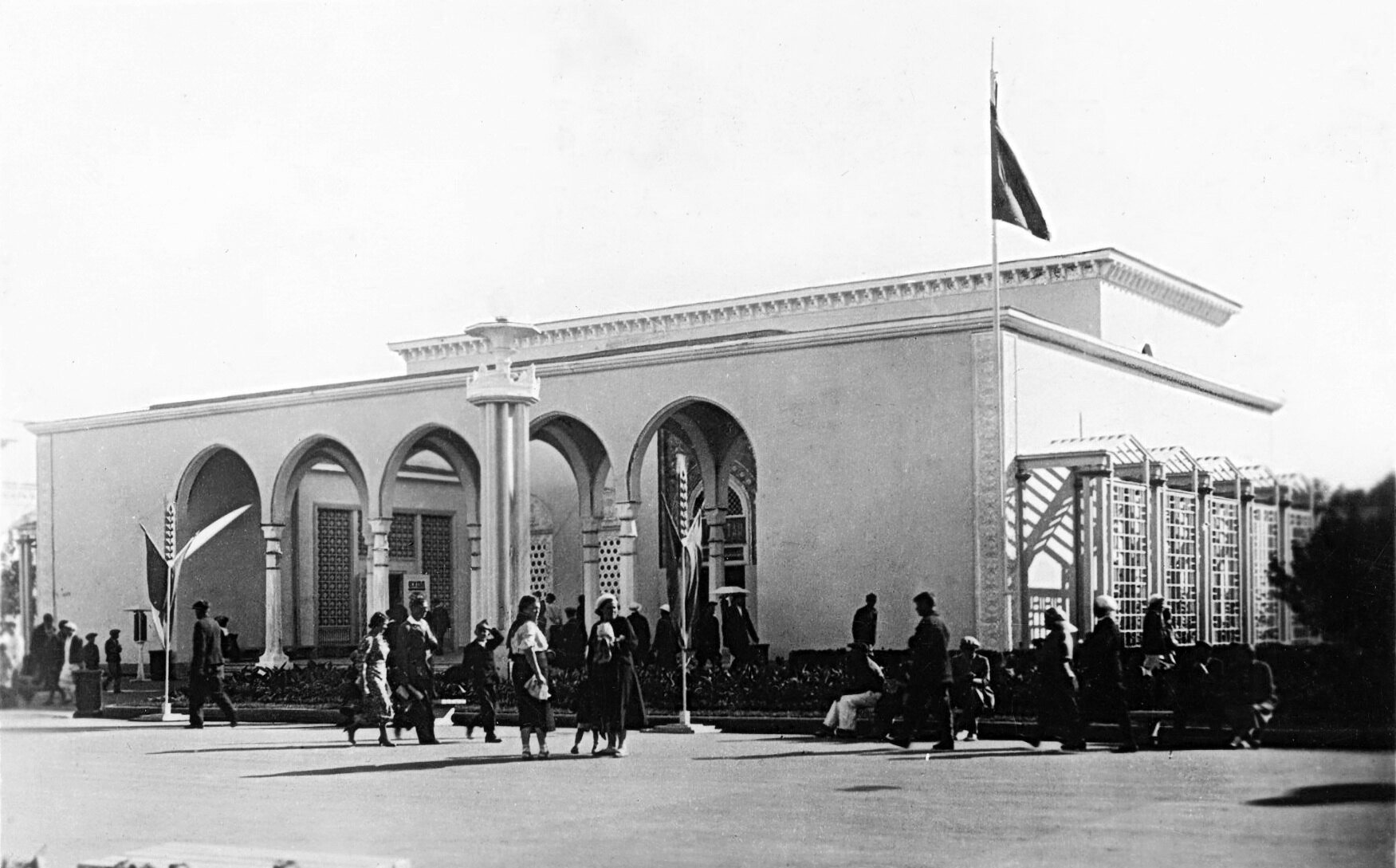 The building dedicated to Tatar ASSR had two fountains and an inner yard - a specific element of Tatar houses. The richly decorated halls detailed the republic’s natural resources and different achievements of peasants. In the 1960s, however, the VDNKh administration decided to reorganize the territory and demolish the pavilion like many other rundown national ones.