Matchmaker, make me a match! When arranged marriages were normal in Russia 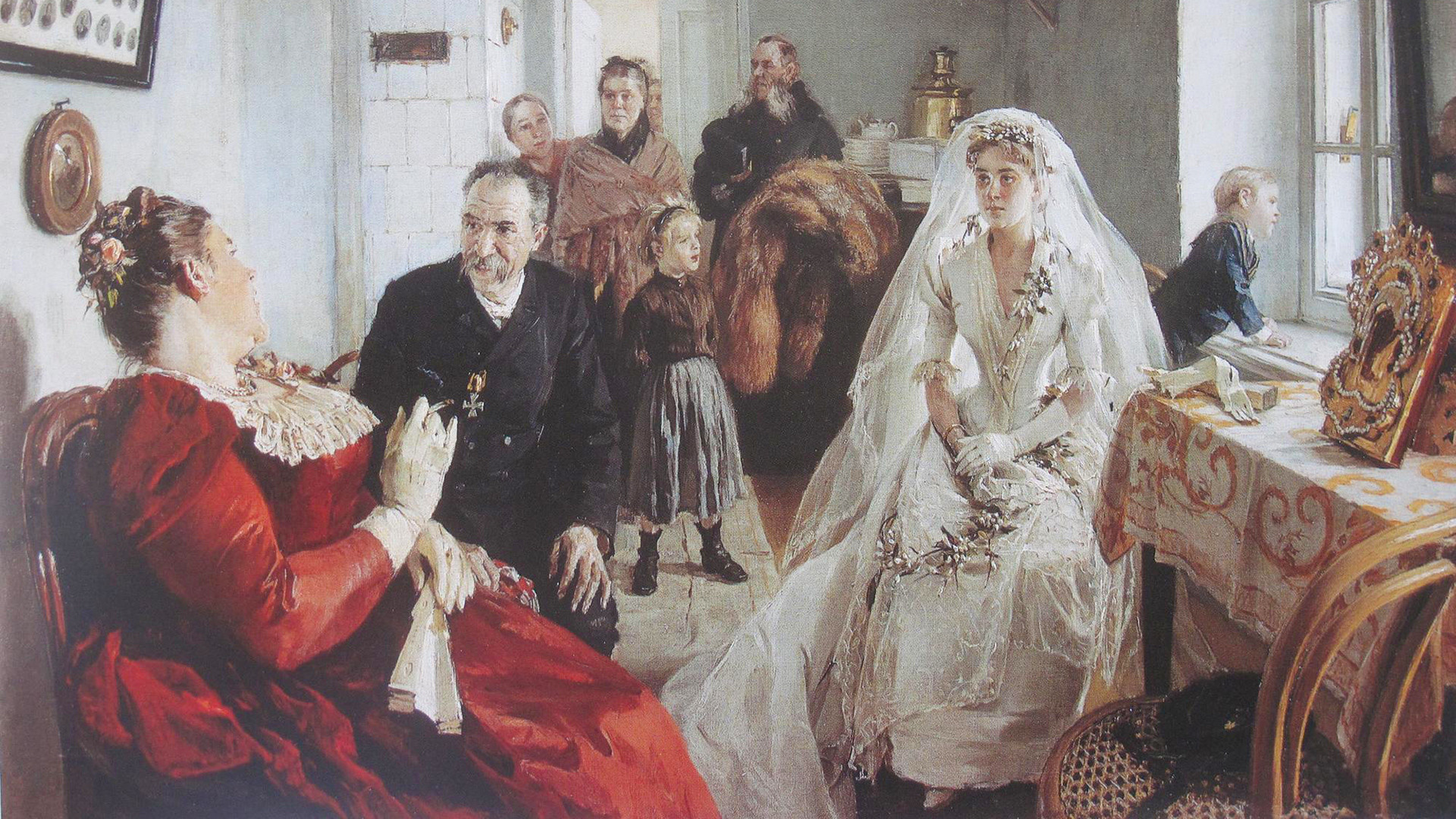 Waiting for the groomsman. I.Pryanishnikov.

Serpukhov Historical and Art Museum
Until the early 20th century, a large number of marriages in Russia were arranged. Most couples could not get married without the permission and blessings of their parents.

“Happy families are all alike; every unhappy family is unhappy in its own way,” Leo Tolstoy wrote in the opening of his masterpiece ‘Anna Karenina’. These words and the novel reflect disillusionment in a section of Russian society with marital norms in the 1870s.

This was a time when some began to question the concept of arranged marriages, where love or even mutual affection was not considered essential. 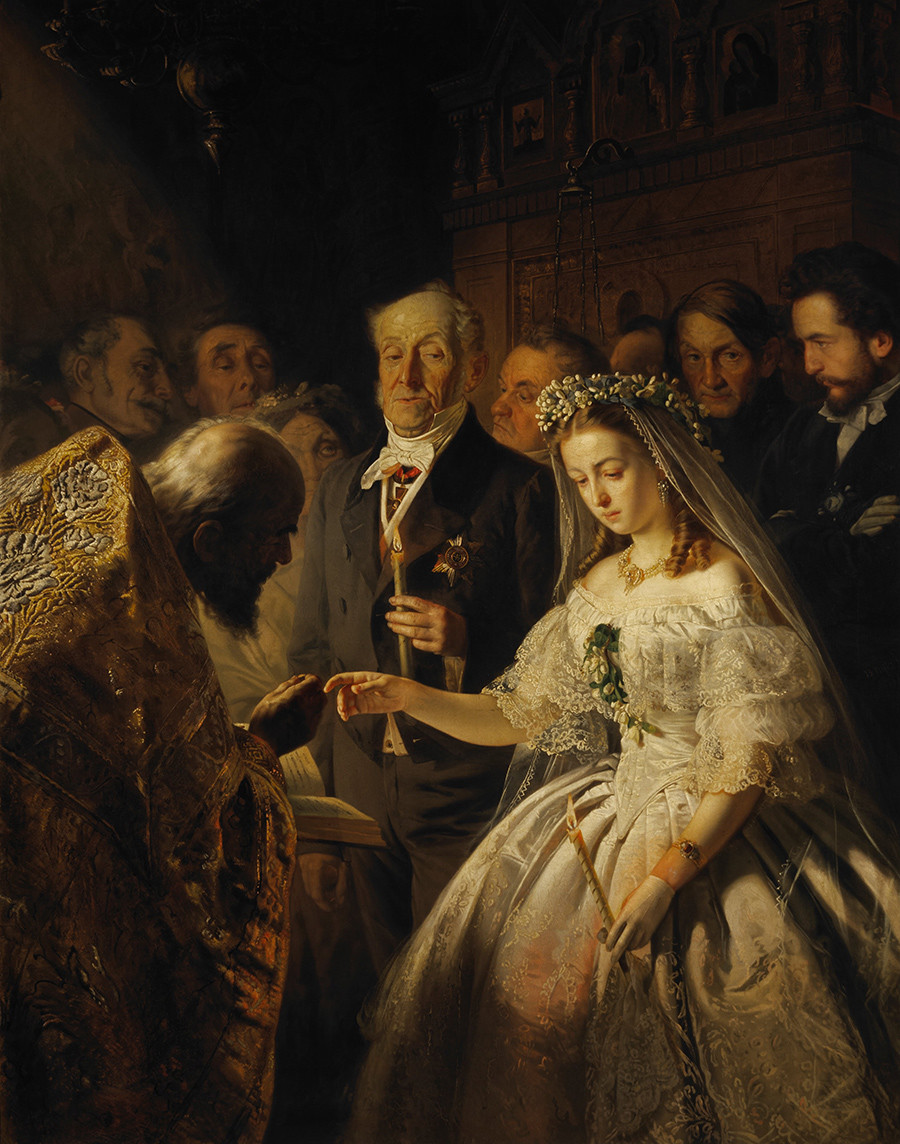 From the aristocracy to the petty bourgeoisie to peasants, it was a norm for parents or guardians to arrange the weddings of their children. This involved matchmakers, fortune tellers and dowries playing a central part in the marriage process, something unimaginable in contemporary Russia. 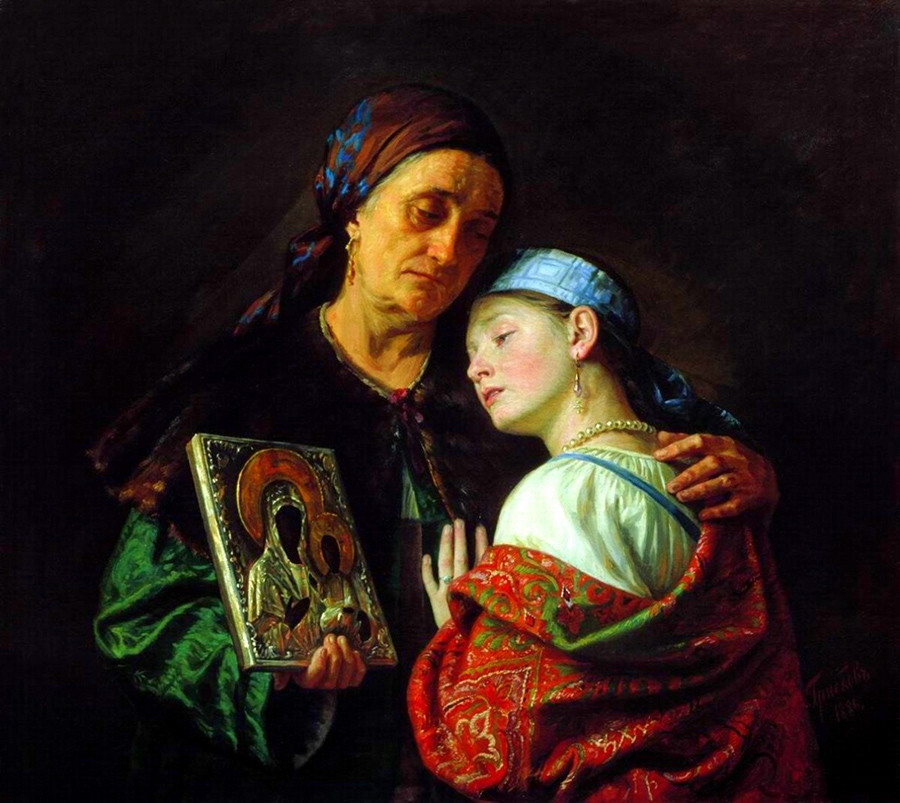 Sergey Gribkov. Blessing for the wedding.

From the time Russia adopted Christianity, marriage came under the jurisdiction of the Orthodox Church, which set the legal age for grooms at 15 and for brides at 13. These marriages were arranged by parents and relatives and the bride would go and live in the groom’s home. Meticulously maintained accounting and tax records called the Reviskie skazki (revision tales) from the 18th century onwards even indicate that in many marriages, brides were often a few years older than their grooms.

The Church periodically introduced reforms in marriage legislation and, by 1840, the legal age for grooms was revised to 18, while for brides 16. There was also an upper age limit of 80 for marriage, as it was believed at that time that widowhood was a punishment for one’s sins! 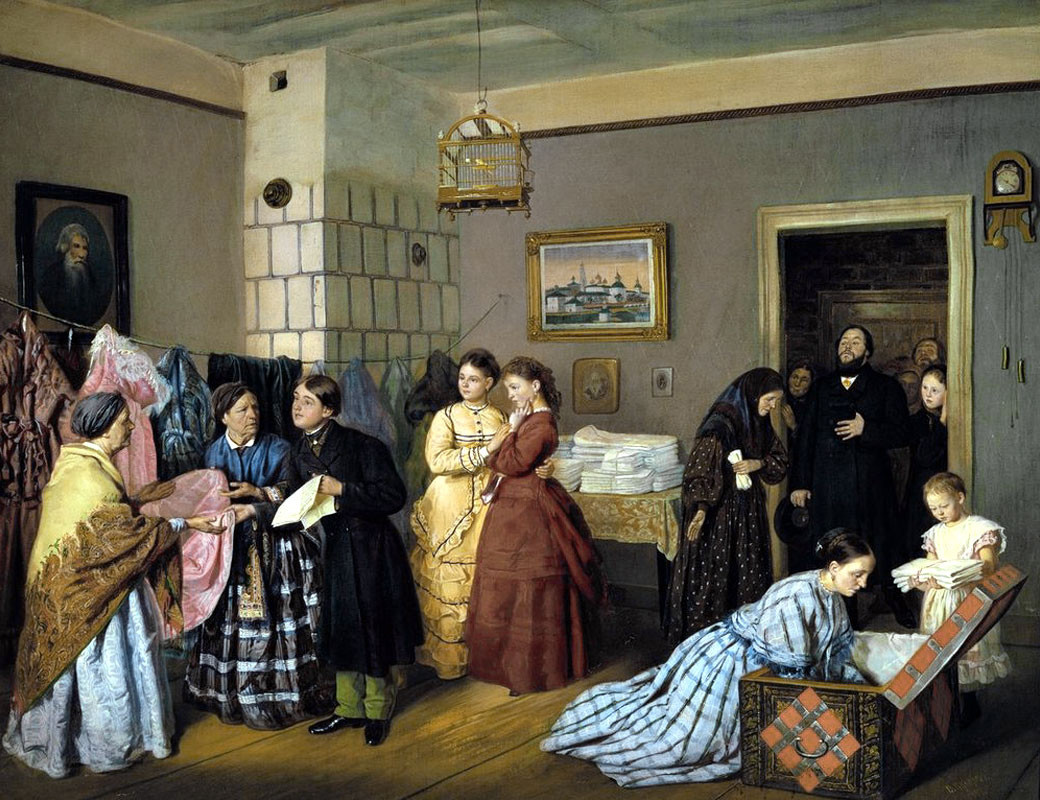 Registration of the dowry, Vasily Pukirev, 1873.

While the Church continued to lay out the rules and procedure for marriage for centuries, it could only strictly enforce them by the late 18th century, according to historian Gregory Freeze. “The reason was not lack of will, but institutional backwardness, the church simply lacked the instruments - unambiguous law, parish documentation, bureaucratic infrastructure - that would have enabled it to translate its formal authority into real power,” Freeze wrote in a paper for the Journal of Modern History.

Until then, there was a degree of flexibility when it came to the implementation of marriage rules, but certain tenets were being followed. For instance, a couple could not get married without the permission and blessings of their parents. 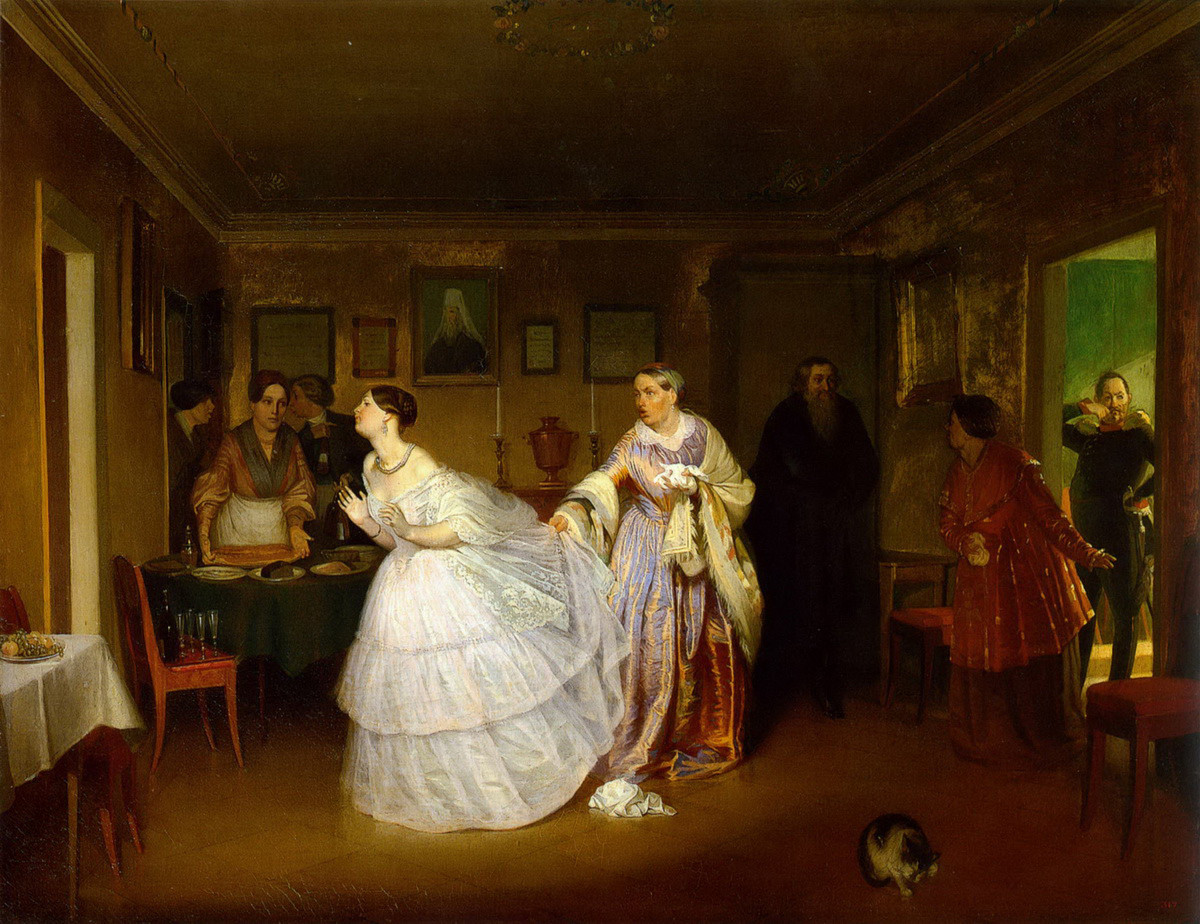 As the Russian Empire expanded and became home to people belonging to different faiths, the Tsarist authorities let community leaders of faiths, such as Islam, have their own rules. The Church, though, was particular that a person belonging to another religion had to embrace the Orthodox faith, if he or she wanted to marry an Orthodox Christian.

Polygamy was forbidden, as was a marriage between close relatives. Peasants were well aware of the familial relations in their community and would help ensure that relatives did not marry.

By the 1760s, a so-called “marriage search book” was introduced. This book, which was signed by several witnesses, confirmed that the bride and groom were not close relatives and that they had the right to get married. It was a criminal offense to give false testimony. 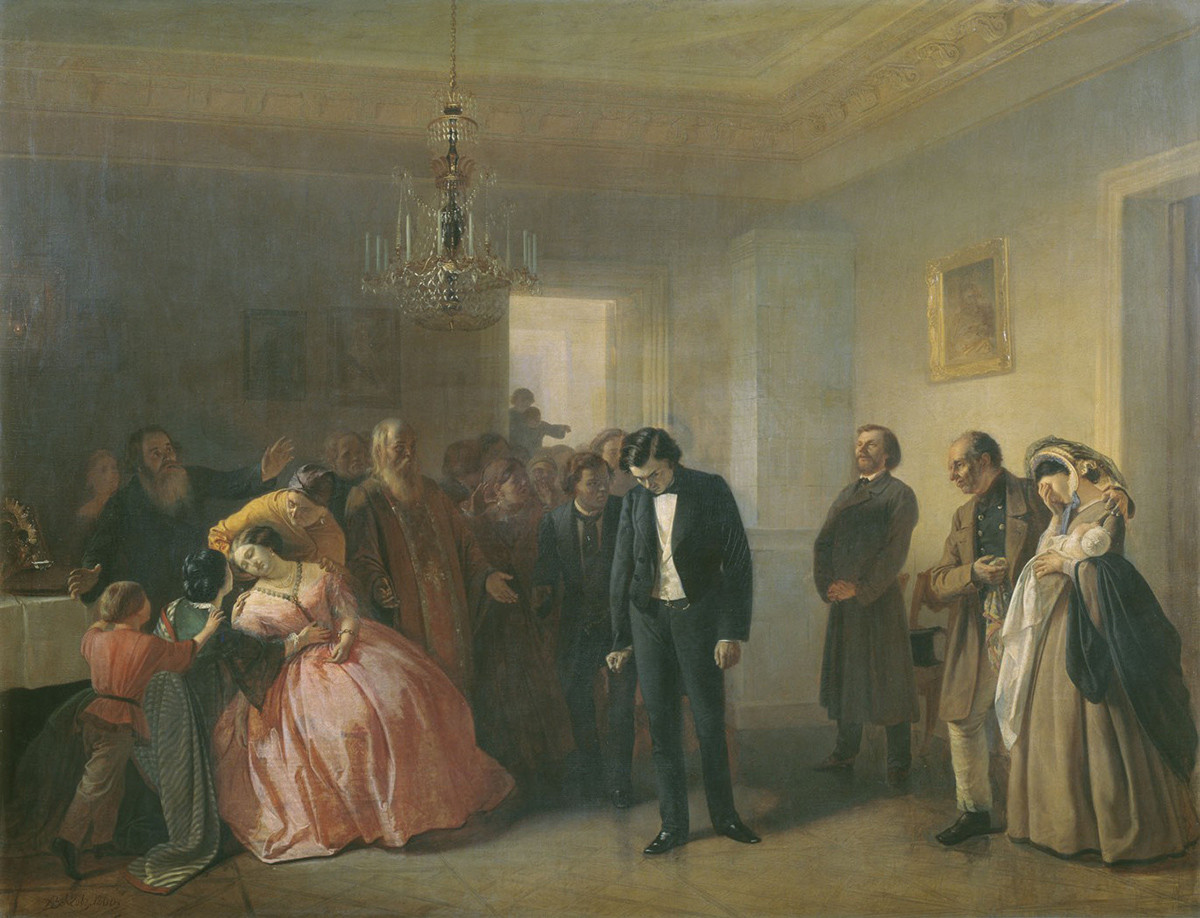 The couples were allowed to meet a few times before deciding on getting married, but these were hardly romantic dates. They were accompanied by chaperones, usually close relatives. Young people belonging to wealthier backgrounds had it easier. Among the aristocracy, the concept of a “blind marriage” was extremely rare.

Another important part of an arranged marriage was dowry and it was the bride’s family that had to do the giving. Of course, a man had to have reasonable wealth or a good means of living to get married. By the late 19th century, an urban dowry chest that was given on the wedding day would often consist of money, jewelry, clothes, bed linen, icons, carpets and a samovar. Wealthier families gifted things like a sewing machine to the newlyweds. The dowries were obviously more modest among the peasantry, but still essential.

While weddings were held throughout the year, the Church did not allow weddings during the Christmas holidays or during Lent. The season of preference for weddings was autumn since the harvests would provide for wedding meals. 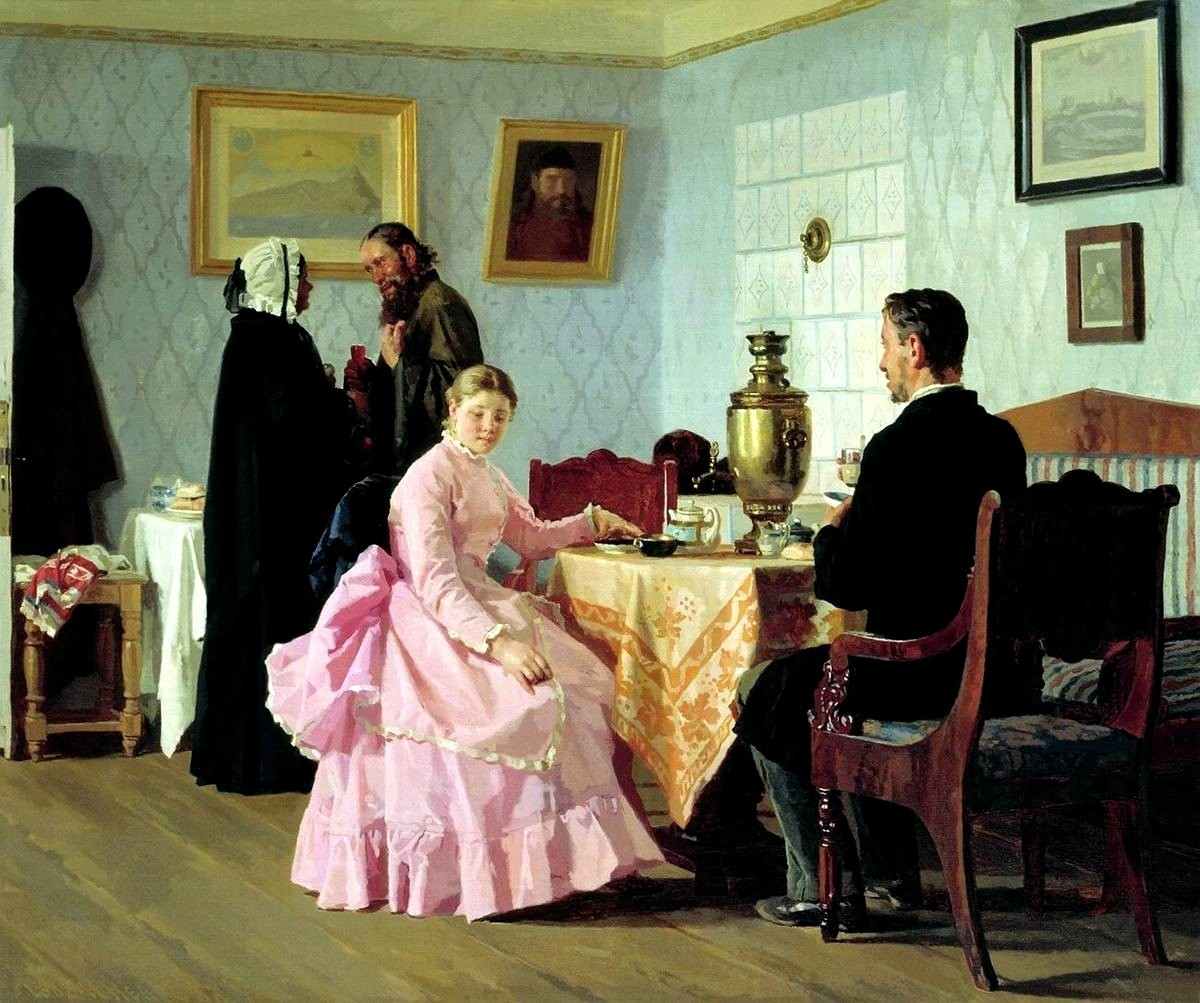 The song ‘Matchmaker, Matchmaker’ from the musical and film Fiddler on the Roof has been a part of western popular imagination for many decades. The story, set in the Russian Empire, briefly depicts a matchmaker, an important profession in 19th century Russia. They’d be used both by poor peasants, as well as wealthier inhabitants of cities.

Matchmakers were usually women and most often enterprising widows, who would have found it difficult to support themselves otherwise. They would have a comprehensive job to do. When exploring a potential match, they’d obviously need to ensure that the couple weren’t close relatives, but once that was done, they’d look at the family history, wealth and social standing and even cultural practises and day to day living before proposing a match. Few people understood human psychology as well as the matchmakers of Imperial Russia.

Russian literature and plays have depicted the important matchmaker. In his 1849 play Our People (or It's a Family Affair‑We'll Settle It Ourselves), playwright Alexander Ostrovsky satirises the merchant class and the institution of marriage. One of the central characters in the four-act play, which was praised by Leo Tolstoy, Nicholas Gogol and Ivan Goncharov, is the matchmaker Ustinya Naumovna. It is widely believed that this character was based on someone the famous playwright personally knew. 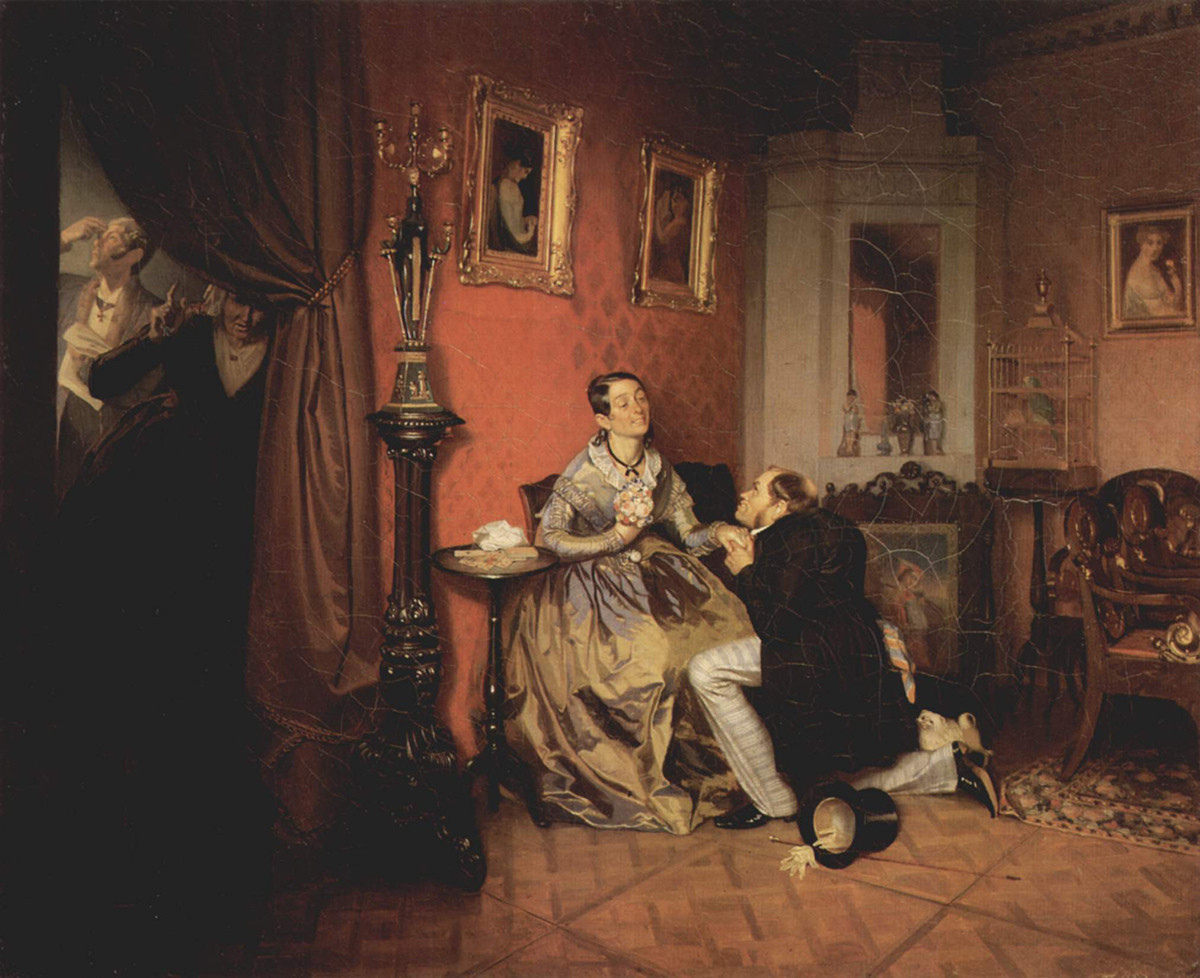 Like Ustinya, matchmakers for the moneyed class in Imperial Russia were resourceful and demanded a good amount of money for their services. When it came to arranging marriages for wealthy people, matchmakers would often bribe servants to get more details about the potential bride or groom and also about their family background and history.

While families in Asia relied on astrologers to match and tally horoscopes, Russians used to consult fortune tellers to verify if the marriage would be a success. Matchmakers were in touch with fortune tellers, some of whom would be on their payrolls to fix a marriage.

Changes in the early 20th century 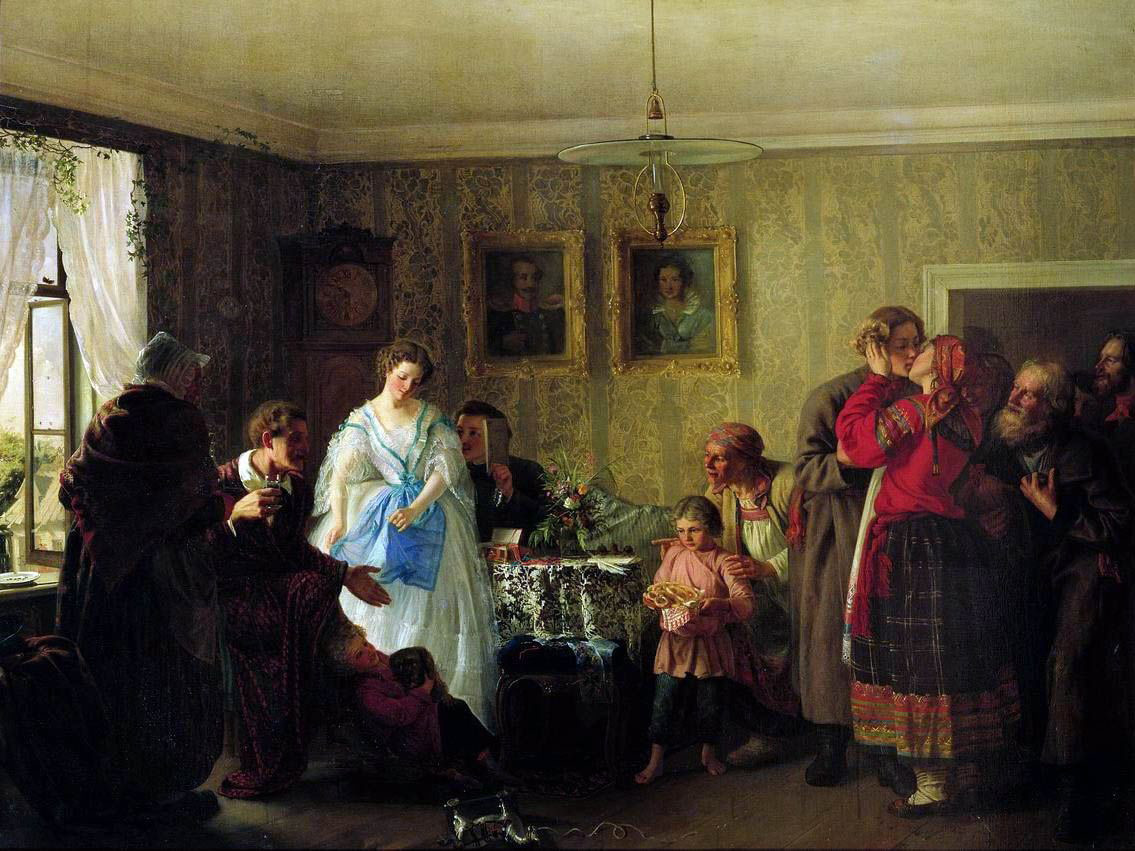 G. Myasoedov. Congratulations to the young people in the house of the landowner in 1861.

In keeping with the times, residents of Russian cities started placing classifieds in newspapers to find brides and grooms in the early 20th century. There was even a newspaper called Svakha (The Matchmaker). A large number of the advertisements were from young men looking for their dream match, but young women also tried this option. Newly university educated residents of Moscow and St. Petersburg, who hailed from peasant families, were looking to find their own brides or grooms from similar or better backgrounds. They’d place an advertisement or send a letter with a photo to the newspaper.

In 2020, Moscow hosted a Family Values Exhibition that displayed advertisements from newspapers of the early 20th century. 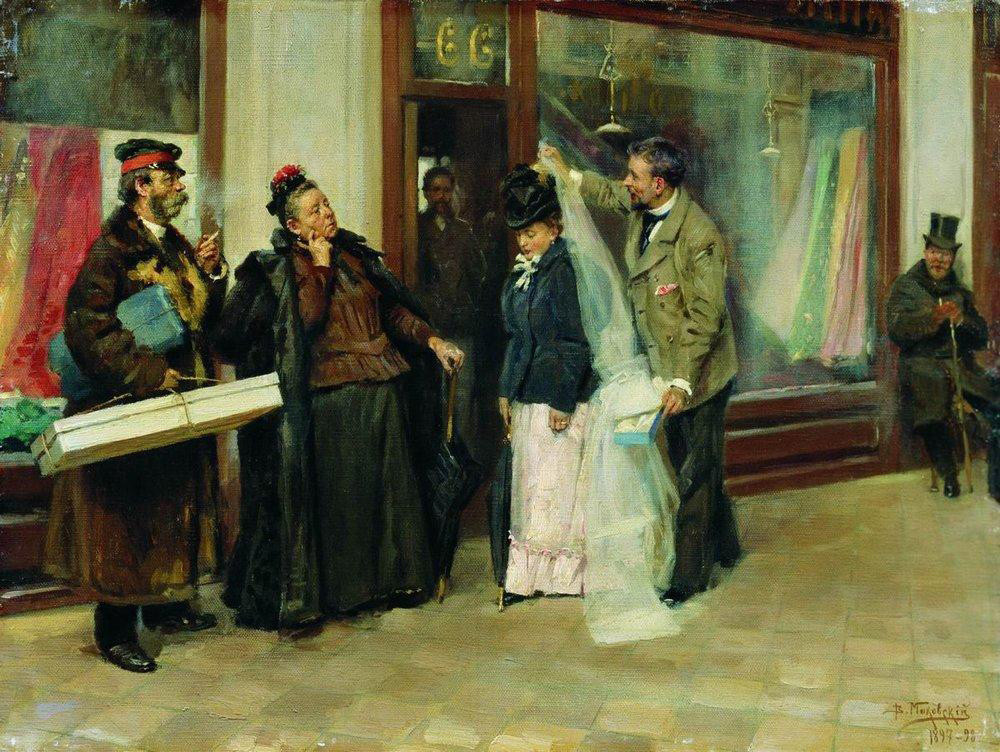 The listings from the papers had the same kind of simple messages that can be seen on modern day dating apps, although Russians from a hundred years ago generally seemed to be a lot more indiscreet when listing their preferences. Take these two for example:

“An intelligent, pretty young lady, 23 years old, who is upstanding, musical and wants to get acquainted with a wealthy gentleman for marriage. ”

“I’ll definitely get married if I find a modest, pretty, hardworking blonde with a nice figure, 27 to 34 years old..”

Arranged marriages were already on the wane by the time the Soviet Union was formed. Massive social changes and rapid urbanization put an end to the once common practice.

The concept of an arranged marriage is now finding a backdoor entry to Russia, due to the internet and dating apps (virtually modern-day matchmakers), although, in the 21st-century version, parents and the Church are no longer involved.