The trouble with divorce in Old Russia 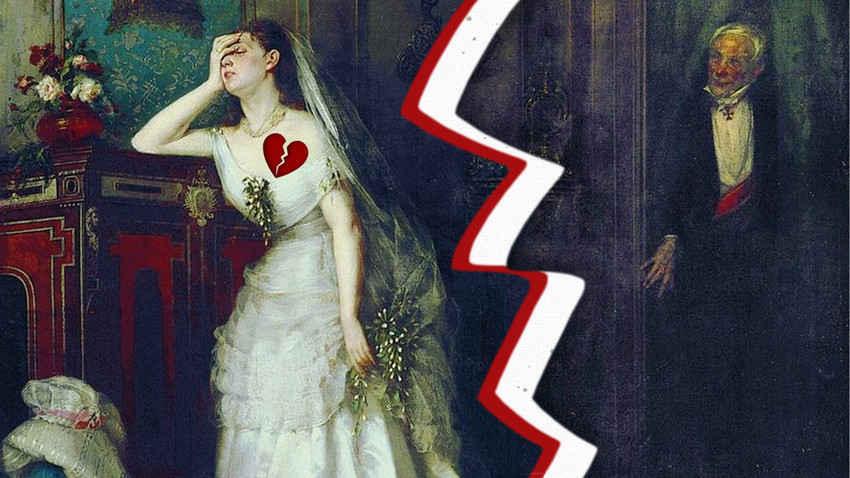 Russia Beyond (Photo: Tambov Regional Art Gallery)
Why was it easier for ordinary folk to run away than get a divorce, and what tricks did Russian tsars employ to get one?

Tsar Ivan the Terrible was extremely unhappy in his marriages. The first three of his wives died – the third one 15 days after the wedding. But marrying for a fourth time was inadmissible from the point of view of the Russian Orthodox Church, so the Tsar had to convene an entire Church Council to obtain its blessing for his fourth marriage, with Anna Koltovskaya. At the same time, the Council emphasized that it had only granted its blessing for a fourth marriage to the Tsar: "May (no-one) dare do such a thing as marry for a fourth time", otherwise "they will be damned in accordance with the sacred laws".

Ivan the Terrible's fourth marriage also proved unsuccessful – it is not obvious why, but it was clearly not because his bride was infertile, as the Tsar cooled to her after just four and a half months. But how to part company with a spouse and get out of a marriage consecrated by the church? This was a problem even for the Tsar.

‘You can marry in but you can't marry out’ 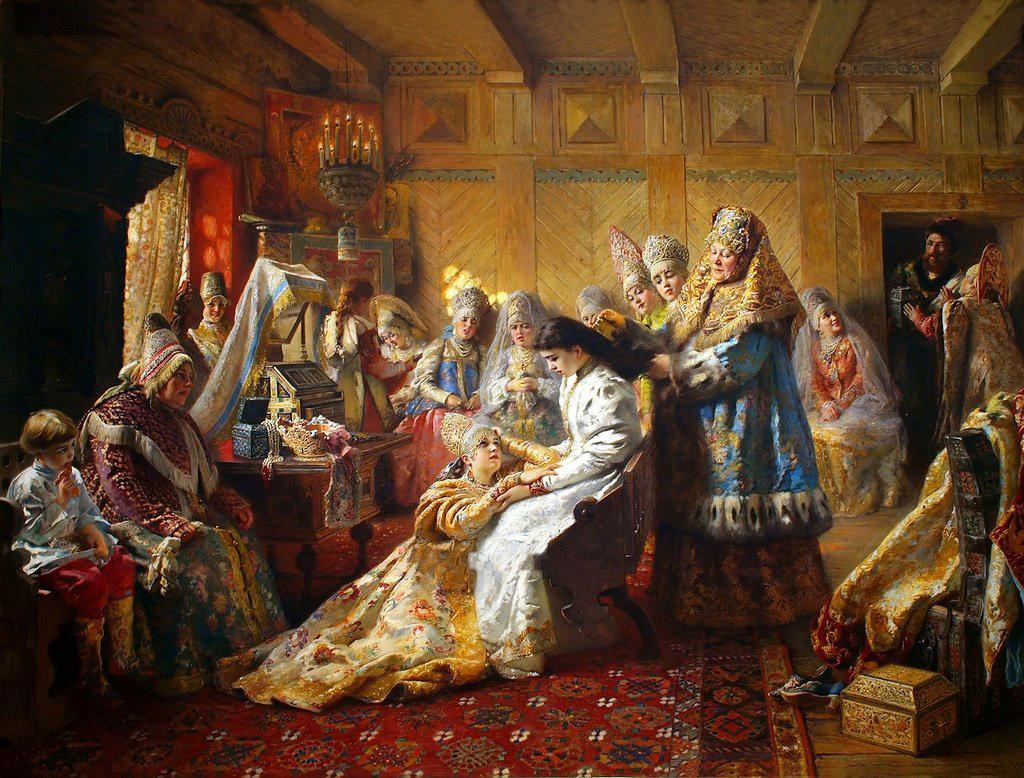 The Russian Orthodox Church was reluctant to grant consent for divorce to couples married by the Church – there had to be solid grounds for it. Such grounds were defined by religious laws, such as the Church Statute of Yaroslav the Wise (11th-12th centuries), for instance. The Statute clearly stated that neither man nor woman could enter into a new marriage unless the first one had been dissolved. There were no exceptions - even an incurable illness of one of the spouses could not be grounds for divorce.

It can be seen from the Statute that the Church prescribed that all marriages, even ones not legally consecrated in church, had to remain in force. Still, the Statute did specify grounds for divorce "through the fault of the wife". The main ones included the attempted murder or robbery of the husband, as well as attending "merrymaking" or visiting other people's homes unaccompanied by the husband, and adultery, of course.

According to historian Natalia Pushkareva, in the 17th century "a husband was considered an adulterer if he had a mistress and children on the side", while a wife was an adulterer if she simply spent the night away from home. A husband who learned of his wife's "fornication" was simply obliged to divorce her. 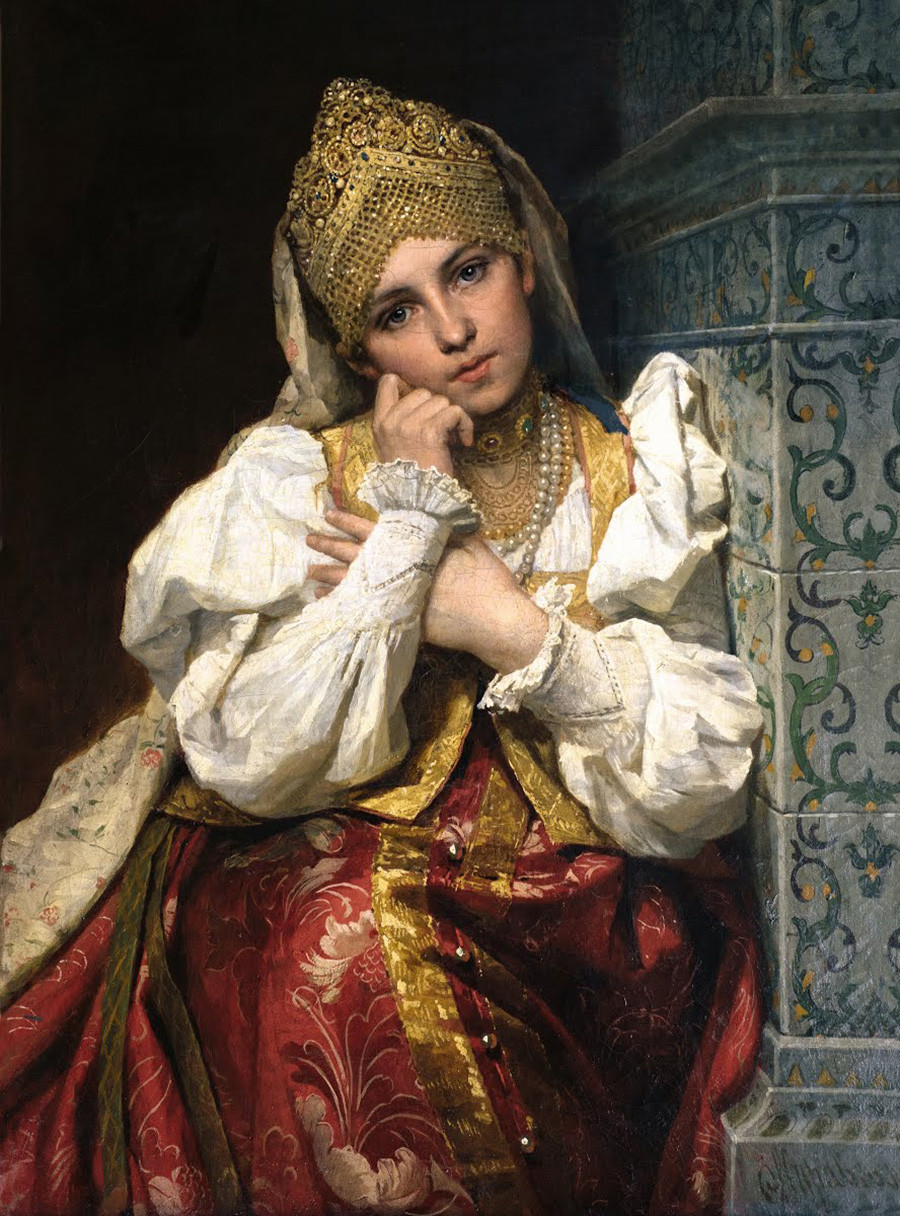 Museum of Fine Arts of Tatarstan

Society treated women "released from their marriage" (divorced) as inferior and they could not expect to be married in church for a second time – only to cohabitate with someone. In the 17th century there was a popular saying, roughly translated as "You can marry in but you can't marry out", which hinted at the true state of affairs as regards marriage. Church texts did in fact allow for the possibility of divorce through the fault of the husband. Grounds could be provided by impotence ("if the husband doesn't mount his wife, they are to be separated" – 12th century) or the husband's inability to provide for his family and children (because of drunkenness, for example). But no documents have survived from Pre-Petrine Russia relating to a divorce initiated by a woman on the grounds of her husband's infidelity or any other fault of his.

Among ordinary folk – peasants or poor town dwellers – the matter could be resolved by one spouse getting away from the other. The law prescribed that fugitive wives had to be found and returned to their husbands, but it said nothing about fugitive husbands. In other words, there was a way out of the situation. But for nobility, particularly princes and tsars whose lives were supposed to be pious by definition, it was much more difficult to arrange a divorce. From the 13th-14th centuries, the practice of getting undesirable wives to take the veil – often by force – became widespread. 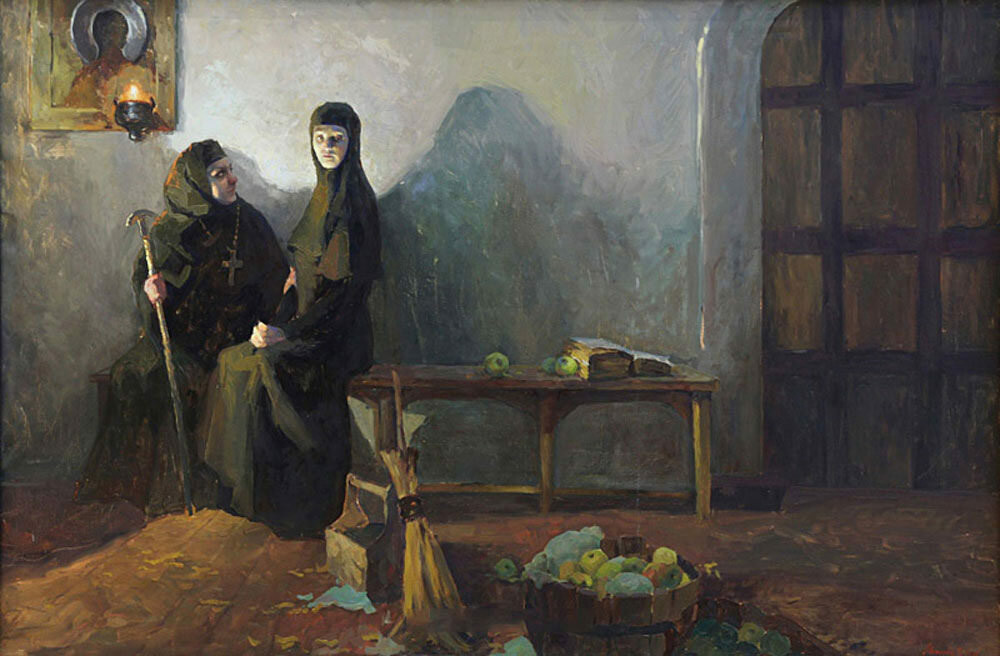 To a certain extent, Ivan the Terrible himself owed the fact of his birth to the divorce of his father, Grand Prince of Moscow Vasili III Ivanovich (1479-1533). His first wife, Solomonia Saburova (1490-1542), failed to produce an heir during their 20 years of marriage. The absence of children in the family threatened the survival of the Rurik dynasty. Vasili even appealed to the Patriarch of Constantinople for permission to divorce on the grounds of his wife's infertility, but the patriarch didn't regard this as a compelling reason for "separation".

Vasili determined to divorce Solomonia, forcing her to take the veil since no conduct that could have served as a pretext for divorce could be held against her. Vasili's action drew extreme condemnation from the Russian church hierarchy, but nevertheless, in 1525 Solomonia was received as a nun into Moscow's Convent of the Nativity of the Mother of God. In early 1526, Vasili III married a young Lithuanian princess, Elena Glinskaya, who three years later gave birth to a son and heir – Ivan Vasilyevich (the Terrible).

The taking of monastic vows as an expedient for obtaining a divorce may have been borrowed from the Byzantine emperors. For instance, Maria of Amnia (770-821), the first wife of Constantine VI (771-797/805), was forcibly made to take monastic vows and sent into exile after the patriarch turned down Constantine's request for a divorce. Constantine subsequently married a second time.

Ivan the Terrible adopted the same "device" to divorce Anna Koltovskaya. Anna was forced to take monastic vows and assume the name of Daria, and subsequently relocated to the Pokrovsky monastery in Suzdal. Ivan's next wife, Anna Vasilchikova (died 1577), was to enter the same monastery.

‘Their love was fairly good at first’ 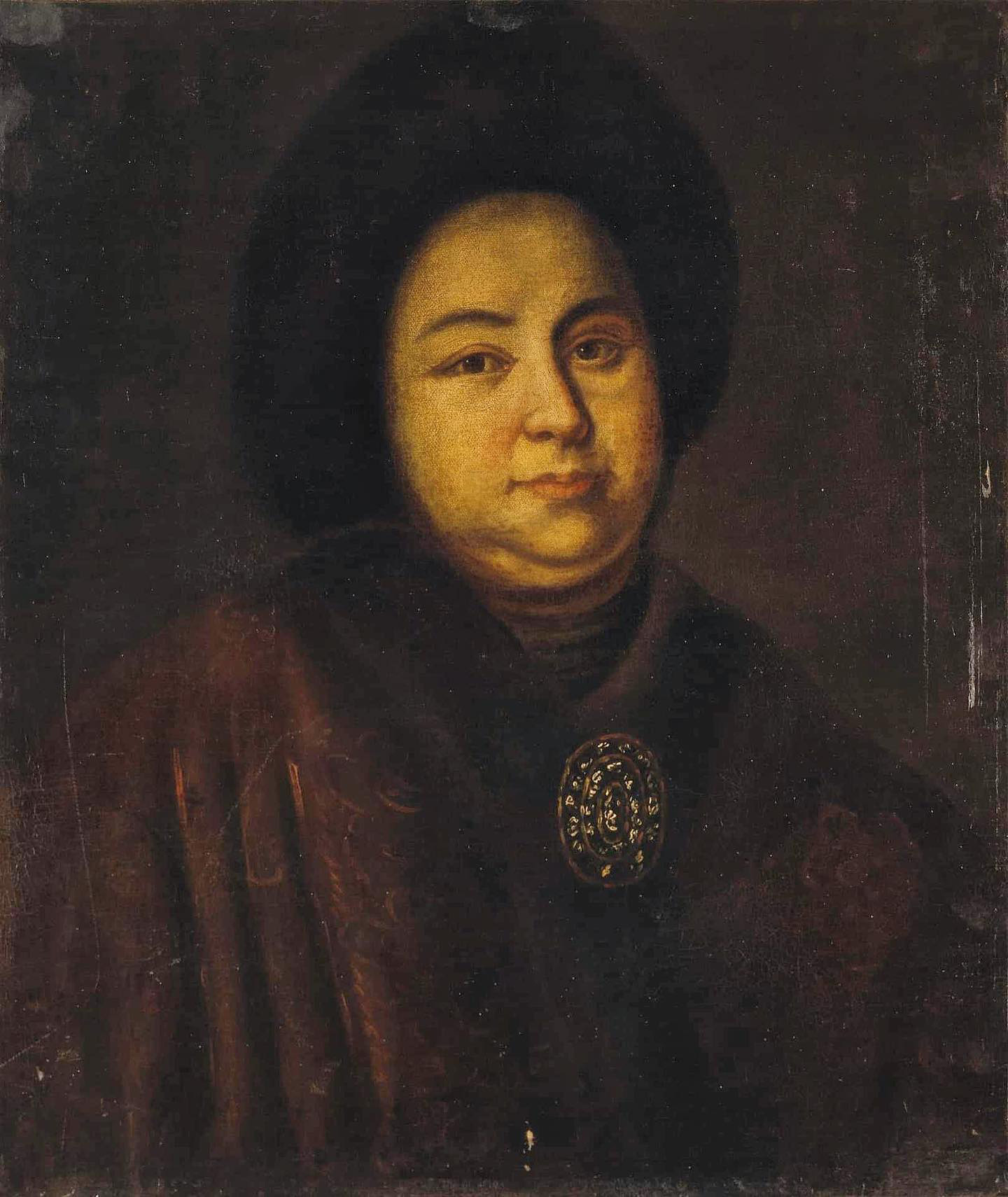 The last tsar to employ entry into a convent as an instrument of divorce was Peter the Great. His first wife, Yevdokiya Lopukhina, was picked for Peter by his mother Natalya Naryshkina without Peter himself having a say in the matter. According to his mother, Peter needed to marry urgently because news had emerged that Praskovia Fyodorovna (1664-1723), the wife of his brother and co-ruler, Ivan Alekseyevich (1666-1696), was expecting a child. Natalya Kirillovna feared that the right of succession to the throne would pass to Ivan's line and in short order organized Peter's marriage to Yevdokiya Lopukhina, descended from an extensive family of military men. Furthermore, according to Russian tradition, only a married sovereign could be regarded as of legal age and able to act as a full-fledged ruler. Peter and Yevdokiya were married on Jan. 27, 1689; two months later, a child was born to Ivan and Praskovia – but not an heir: the child was a daughter, Tsarevna Maria (1689-1692).

Here is how Prince Boris Kurakin, Peter's brother-in-law (married to Yevdokiya's sister, Ksenia Lopukhina), described the marriage: "The love between them, Tsar Peter and his spouse, was fairly good at first, but it lasted perhaps a year. And after that it ceased; moreover, Tsaritsa Natalya Kirillovna grew to hate her daughter-in-law and preferred to see discord between her and her husband than love." Although in 1690 a son, Tsarevich Aleksei Petrovich (1690-1718), was born to them, by 1692 Peter had left his wife and started living with his "mistress", Anna Mons. After Natalya Kirillovna's death in 1694, Peter stopped maintaining any contact with Yevdokiya. 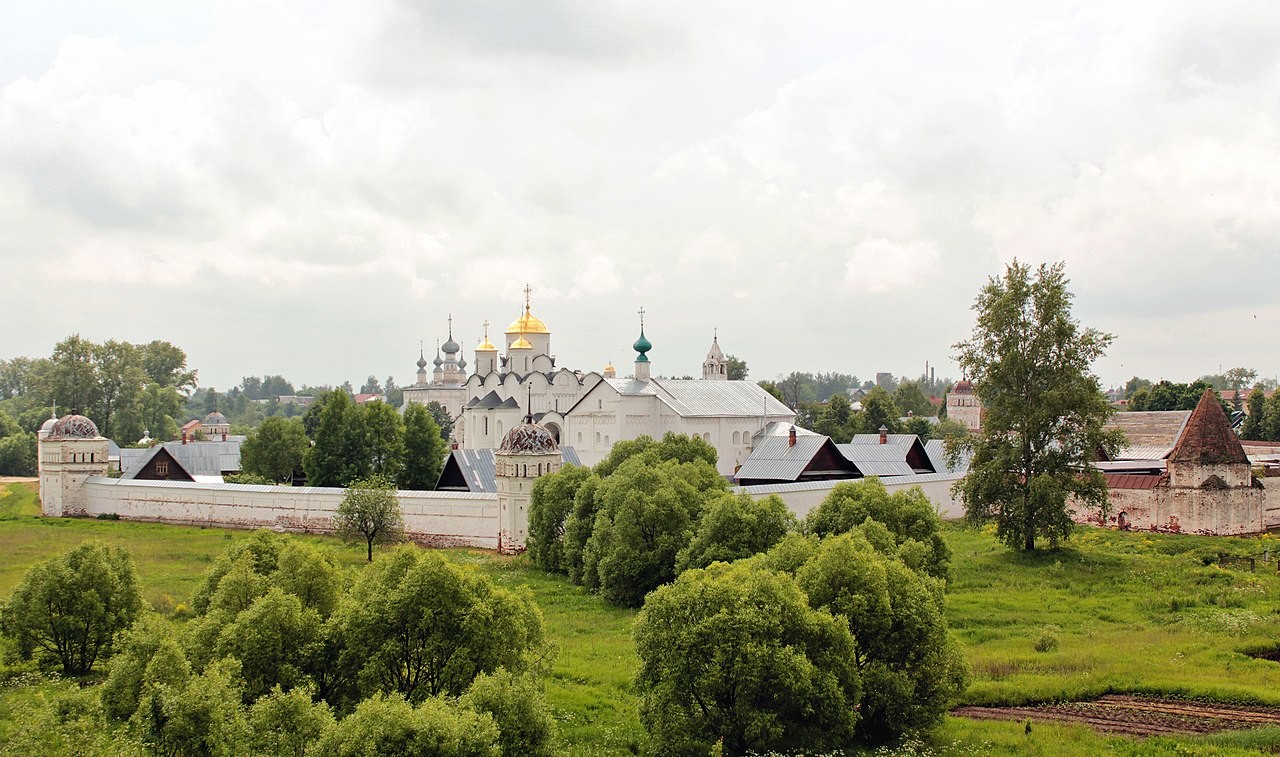 When he was in London as part of his Grand Embassy in 1697, Peter wrote to his uncle, Lev Naryshkin, and boyar Tikhon Streshnev asking them to persuade Yevdokiya to enter a convent, but she refused. On arriving in Moscow in 1698, it took Peter a whole week before he deigned to meet his wife, who again refused to take monastic vows. Within three weeks, however, she was being escorted to the Pokrovsky monastery under guard. The Tsar himself seems to have been ashamed of what he had done, and he remarried only in 1712. His new wife was Martha Skavronskaya (Catherine I). 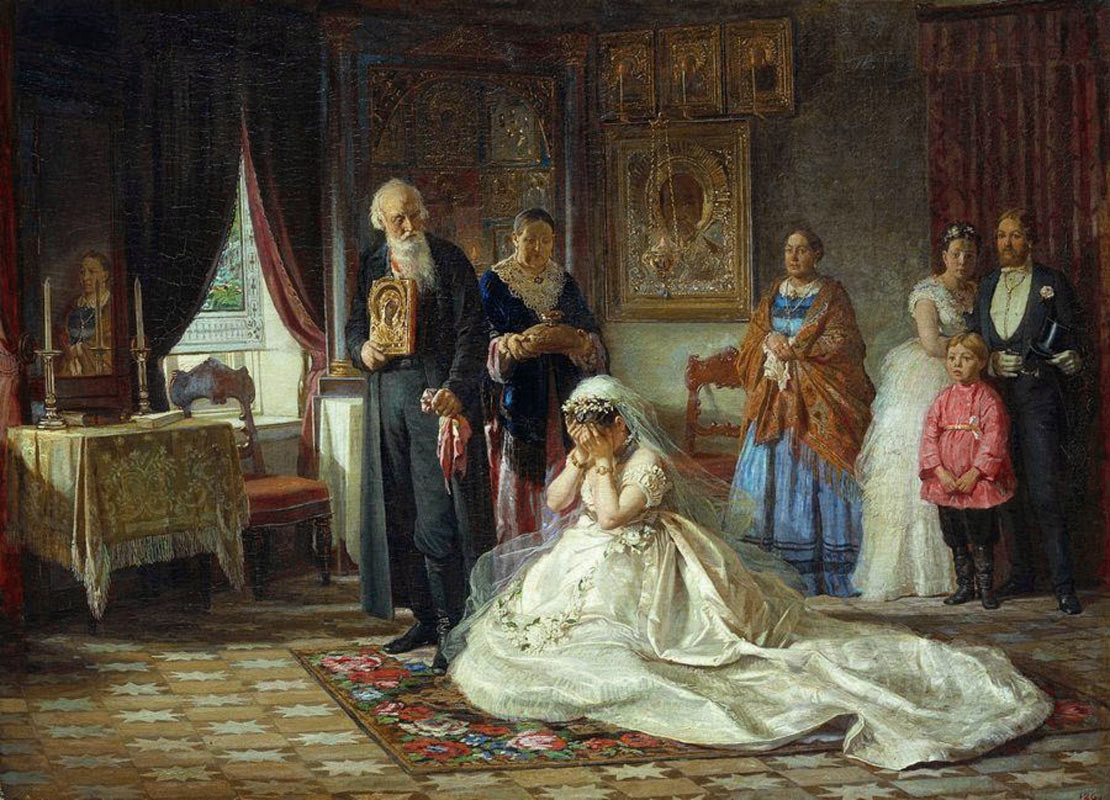 At the time of Peter the Great, the Church was subordinated to secular authority and started being administered by the Most Holy Synod, the Patriarchate having been abolished. From Petrine times onwards, Russian legislation defined more precisely the "fitting" reasons for divorce: proven adultery by one of the spouses, pre-nuptial disease making marital relations impossible (serious venereal illness or impotence), deprivation of property rights and banishment of one of the spouses, and the absence without trace of one of the spouses for a period exceeding five years.

In order to "formalize" a divorce on these grounds, the petitioner had to apply to the consistory (administrative council) of the diocese in which they resided. A final decision on whether a marriage could be dissolved – even a marriage between peasants – was now determined by the Most Holy Synod.

Judging by the statistics, however, it is clear that cases of divorce in Imperial Russia were few and far between. In 1880, 920 divorces were registered in a country with a population of more than 100 million. The 1897 census revealed just one case of divorce for every 1,000 men, and two divorcees for every 1,000 women. In 1913, a total of 3,791 divorces were registered in the whole of the Russian Empire, which then numbered 98.5 million members of the Russian Orthodox faith (0.0038 percent).

It is also interesting that illegitimate children were regularly registered. For instance, 22.3 percent of children in St. Petersburg in 1867 were illegitimate, while in 1889 the figure was 27.6 percent. And yet children begotten "on the side" could be presented as direct evidence of marital infidelity and a basis for divorce – but the number of divorces did not increase as time went on. In the society of the time, it remained very difficult to obtain a divorce, even for members of the social elite.

In 1859, Princess Sofia Naryshkina decided to divorce her husband for a serious reason – he had informed her that on his overseas travels he had contracted a venereal disease that had left him impotent. The Most Holy Synod's investigation of the matter took all of 20 years, and in the end Naryshkina failed to obtain a divorce.

Prince Grigory Alexandrovich was examined by doctors, who discovered he had syphilis which, to go by the location of the sores, had been contracted "through intercourse with a woman" but, in the view of the doctors, could be cured and his sexual function restored. Astonishingly, the Synod went on to rule that the adultery could not be proven simply on the prince's own say-so, and, given the additional factor that there were already children from the marriage, the divorce was not granted. Disease, even of this kind, was still regarded as an "unfitting" reason for dissolving a marriage. A husband was "required to maintain his wife even if she was possessed and kept in fetters".

The upshot was that the Russian nobility had to somehow deal with the business of parting from their spouses on their own – the most common solution was for the partners in the marriage to simply go their separate ways. The trouble was that without a dissolution of their marriage husbands continued to be materially responsible for their wives, maintained them and shared their property with them.

With the arrival in power of the Bolsheviks, the divorce question, like many other questions, was solved in a radical manner. Under the decree “On the Dissolution of Marriage”, divorce was now formalized not by the church authorities but by the secular ones, and, what is more, it could be done at the request of just one of the spouses. The procedure for contracting and annulling a marriage was now effectively a matter of a few minutes.