CRAZY ideas about the future the Soviets envisioned (PICS) 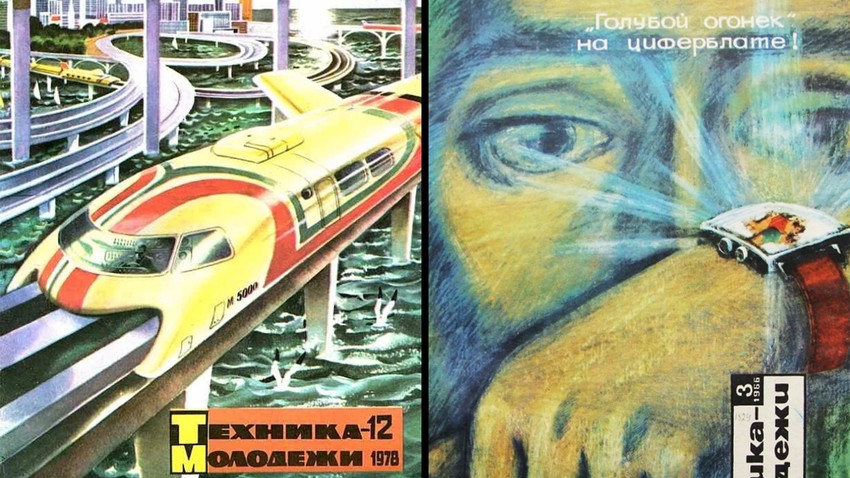 Tekhnika Molodezhi
Although many past predictions of the future have fallen way off the mark, there are a few that are now a reality - despite seeming impossible at the time. And the Soviets weren’t shy of drawing up fantastical ideas themselves… some you may even be using today!

‘Tekhnika Molodezhi’ was the paramount sci-fi magazine in the Soviet Union. Translating roughly as “Engineering for the Youth”, the magazine pioneered the sci-fi world in the USSR by featuring works of Soviet and Western writers alike.

For example, British writer Arthur C. Clarke once caused a scandal in the Soviet publishing world after he stuffed one of his novels with characters named after Soviet dissidents and managed to get it published in the magazine. 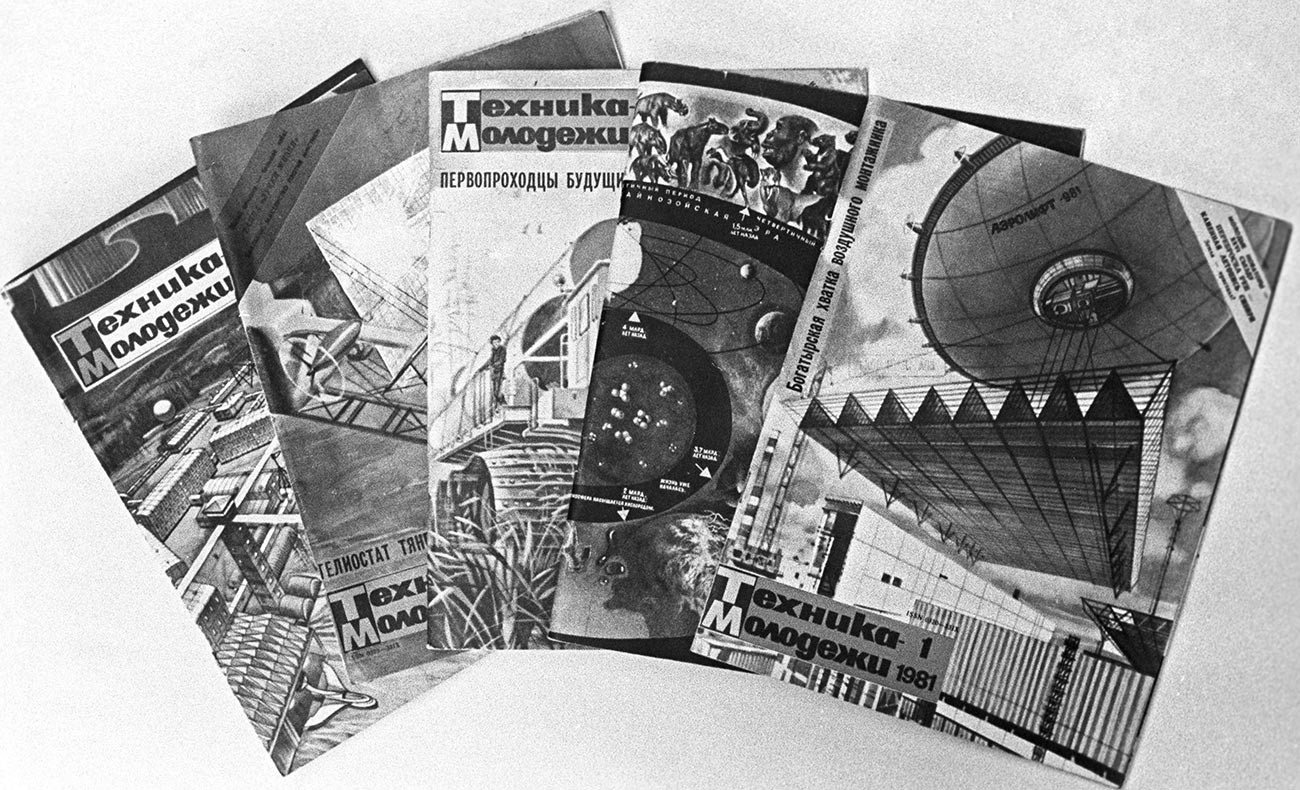 Besides works of fiction, the magazine, which sold 1.7 million copies monthly, also printed scientific articles by established academics and aspiring visionaries. Names like Korolev, Glushko and Kapitsa all featured in the magazine’s numerous issues since its launch in 1933.

Oftentimes, the editorial board of the magazine and its writers featured ideas and illustrations which seem to have predicted the future as we know it today with astounding accuracy.

Guess what. The magazine envisioned the Apple Watch in one of its issues published in 1966. The illustration shows a popular Soviet TV show — ‘The Blue Light’ — being broadcast via the watch’s screen. 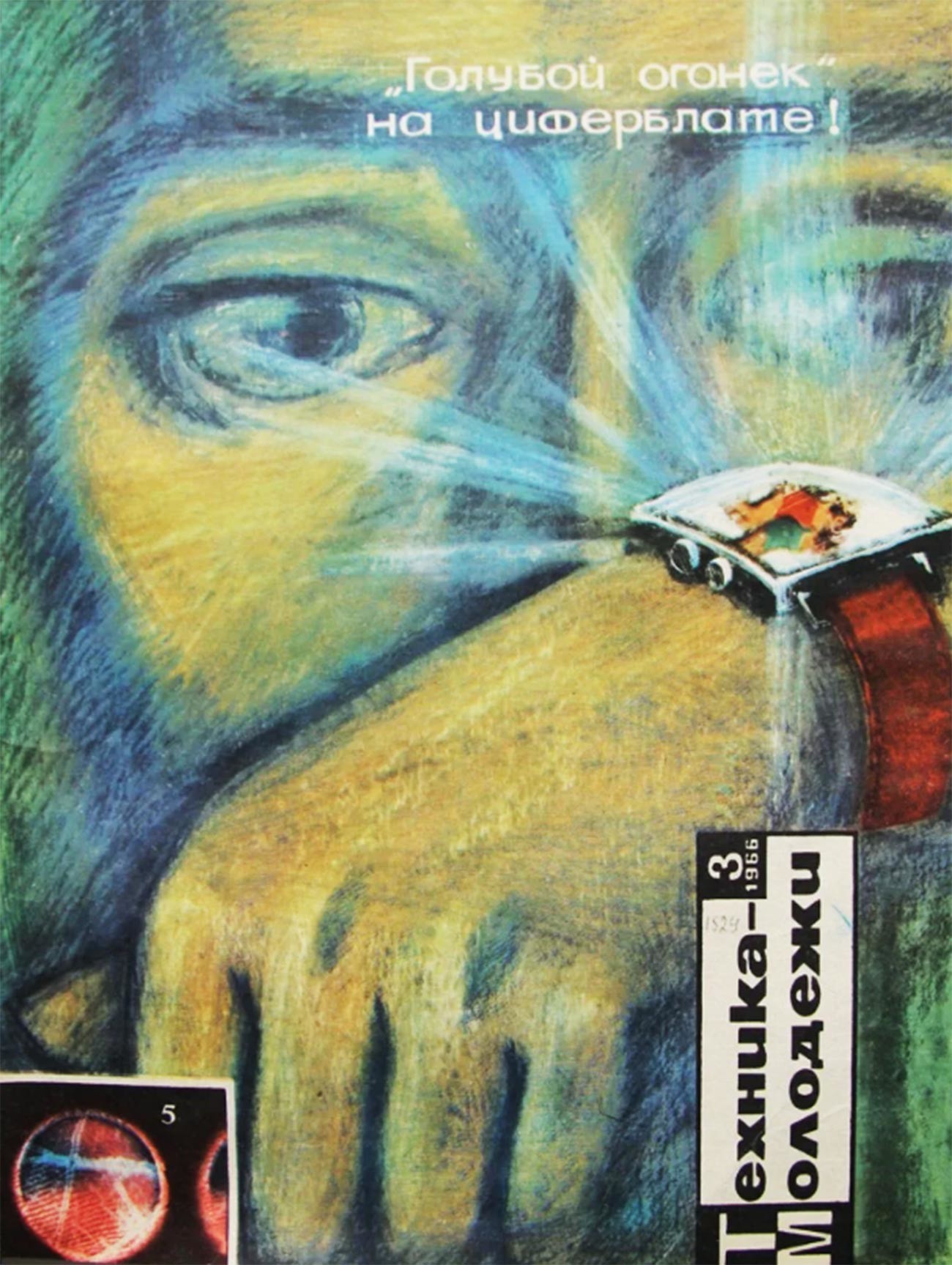 Another illustration published in 1983 showed a human-controlled machine akin to robots featured in the 2013 movie ‘Pacific Rim’. Unlike the Hollywood-made war-robots, the Soviet machine was to be used for cutting through forests. 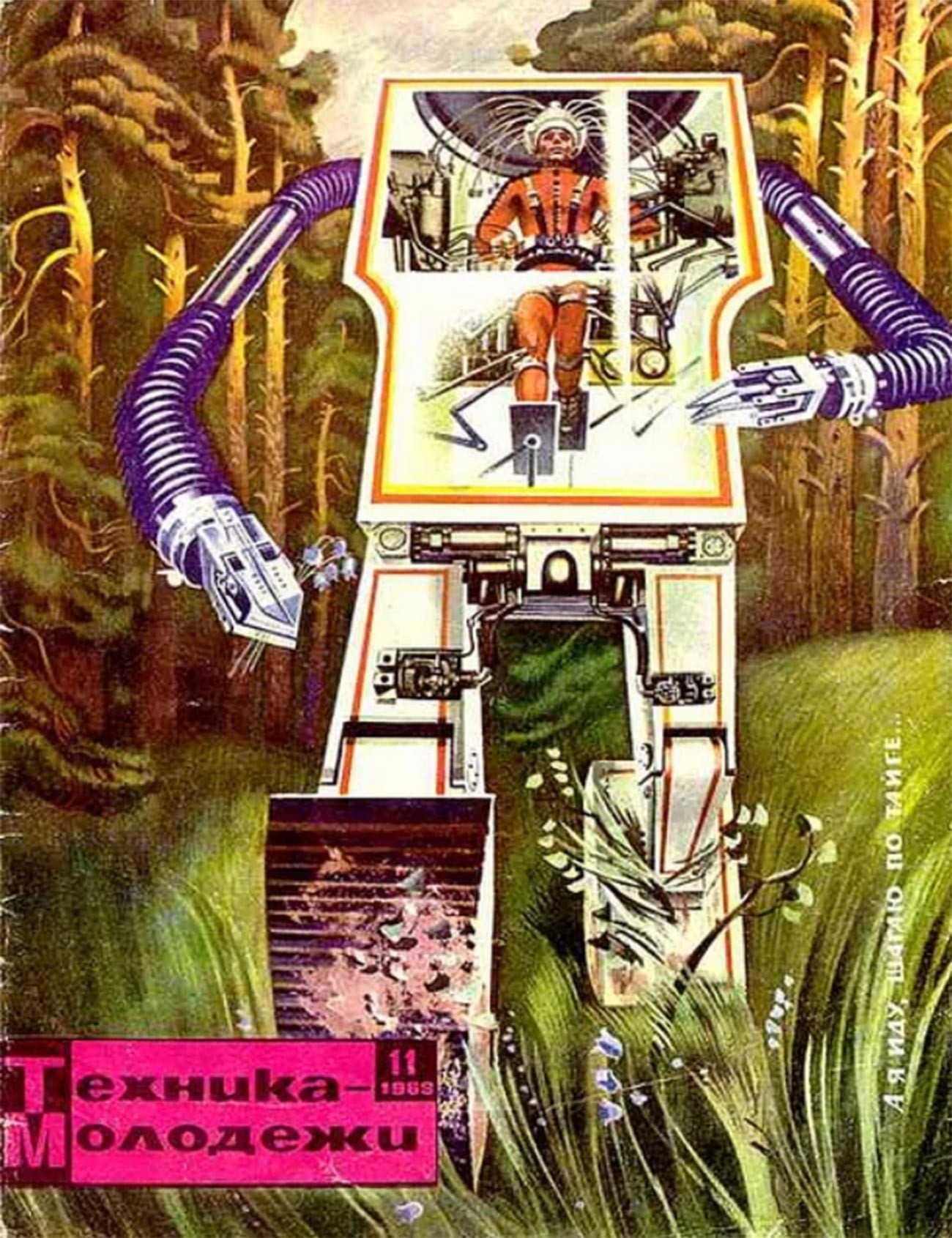 Panorama glass roofs in modern cars is not a recent invention, it seems by looking at the old issues of the magazine. Soviet car enthusiasts predicted this design feature a long time ago. Below is an illustration from 1955. 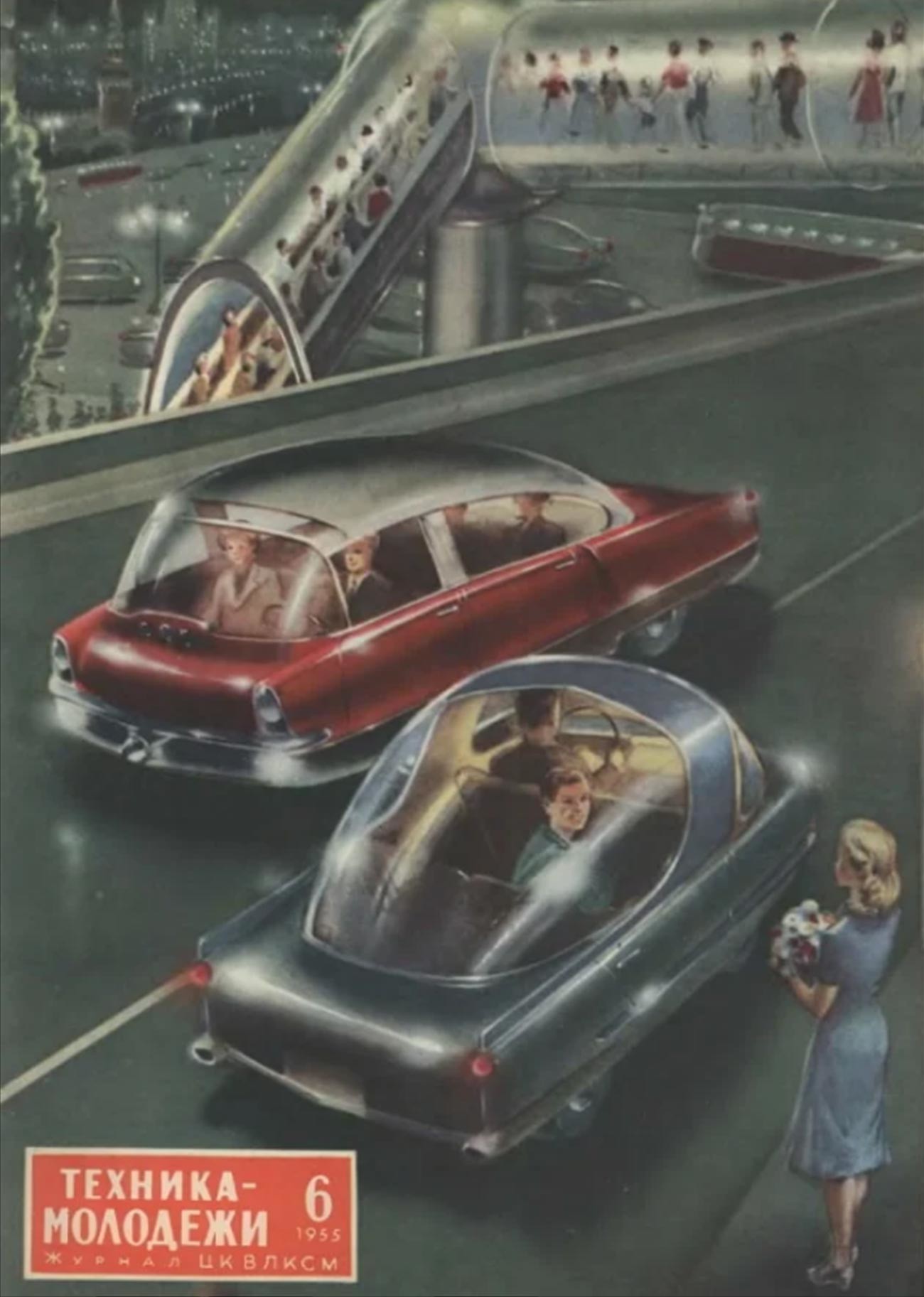 Not all of the illustrations resembled accurate predictions about the future. Some drew inspiration from objects and systems which had already been in use, but remained largely unfamiliar to the Soviet readership. For example, this railway system looks suspiciously similar to Chicago ‘L’ metro system. 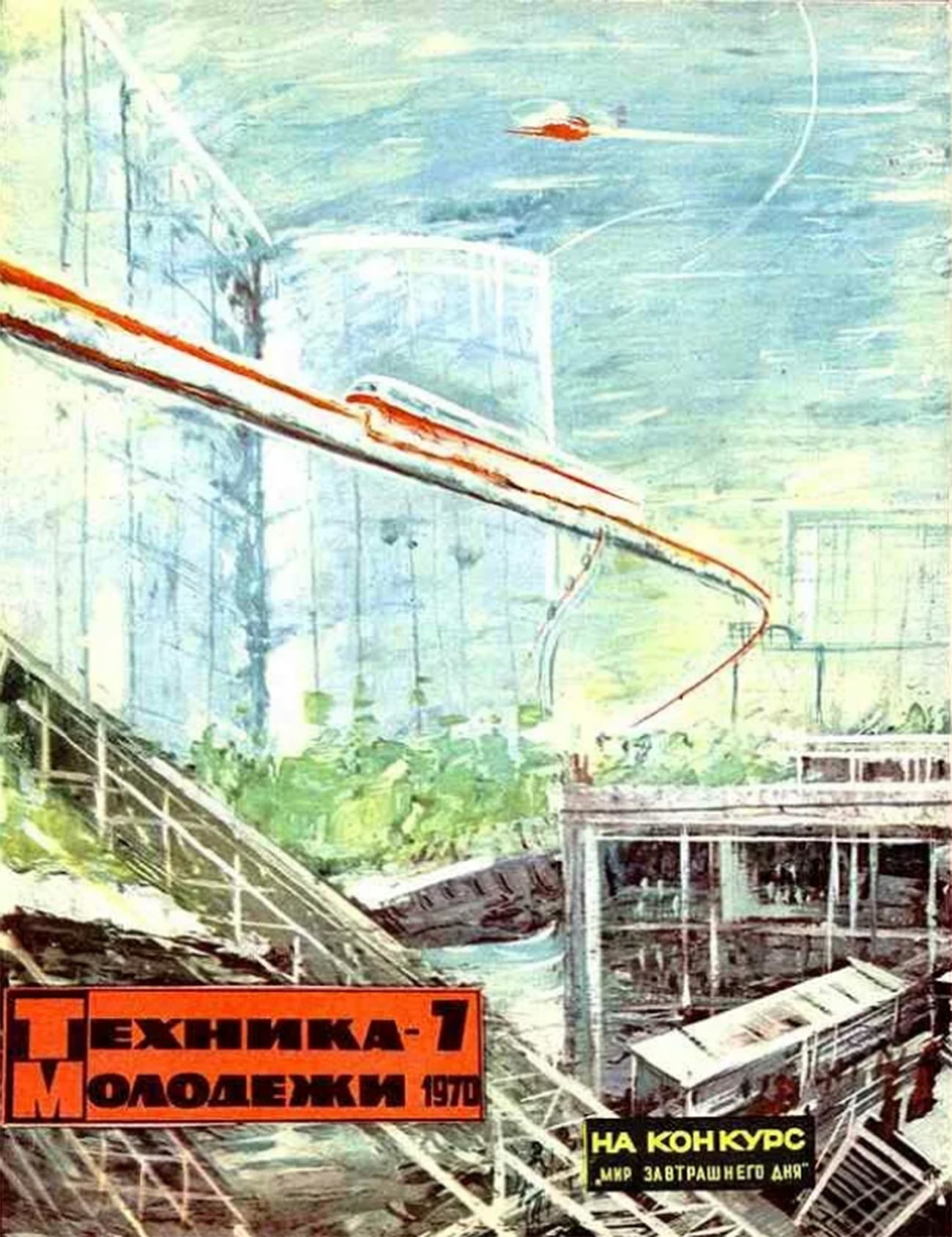 Some of the magazine’s ideas were never realised. For example, this spider-like vehicle for climbing cliffs remains a mere illustration with no prototype to back it up. 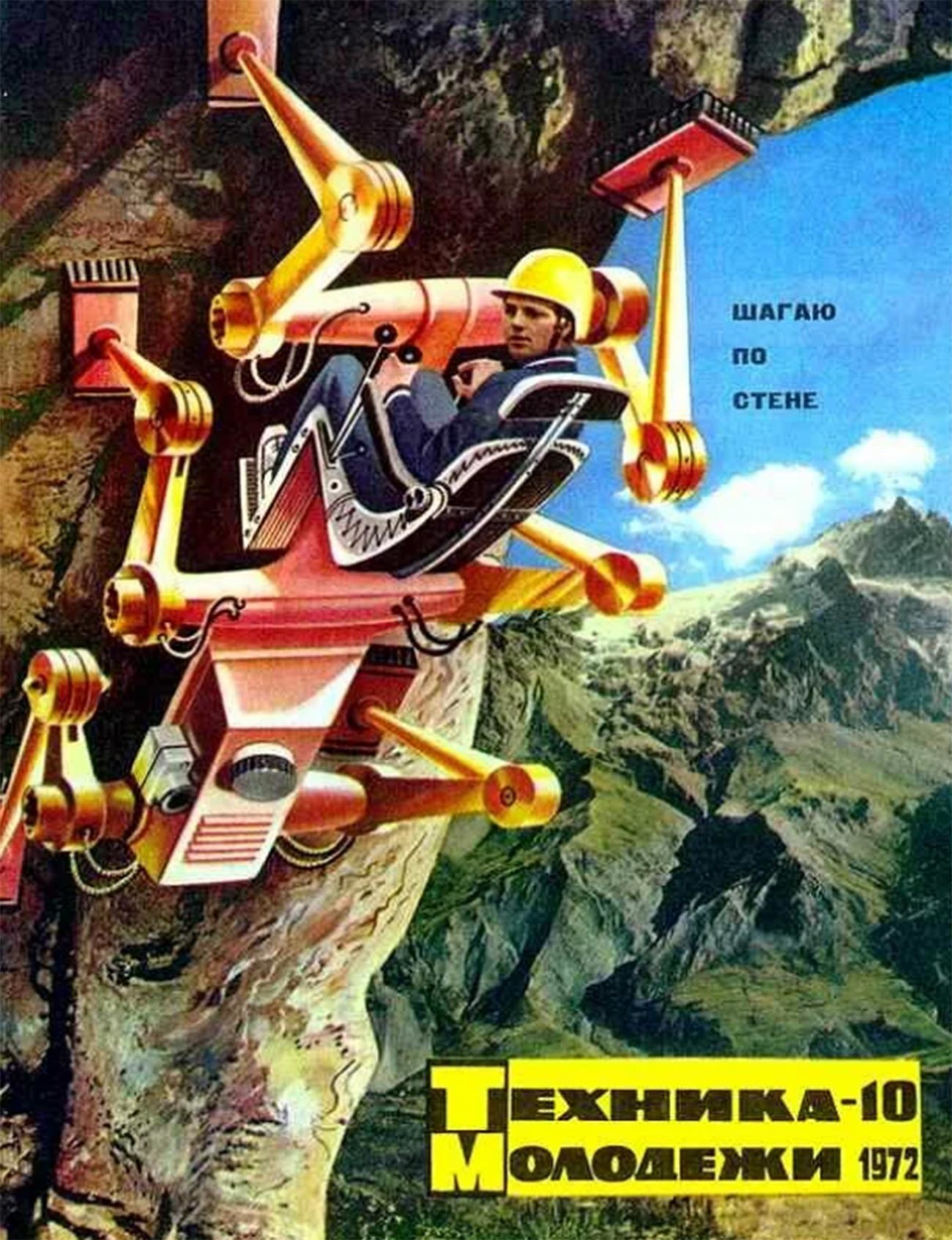 In 1977, the magazine suggested airplanes carrying cargo inside their wings could appear in the year 2000. However, it was also another prediction that failed to materialize. 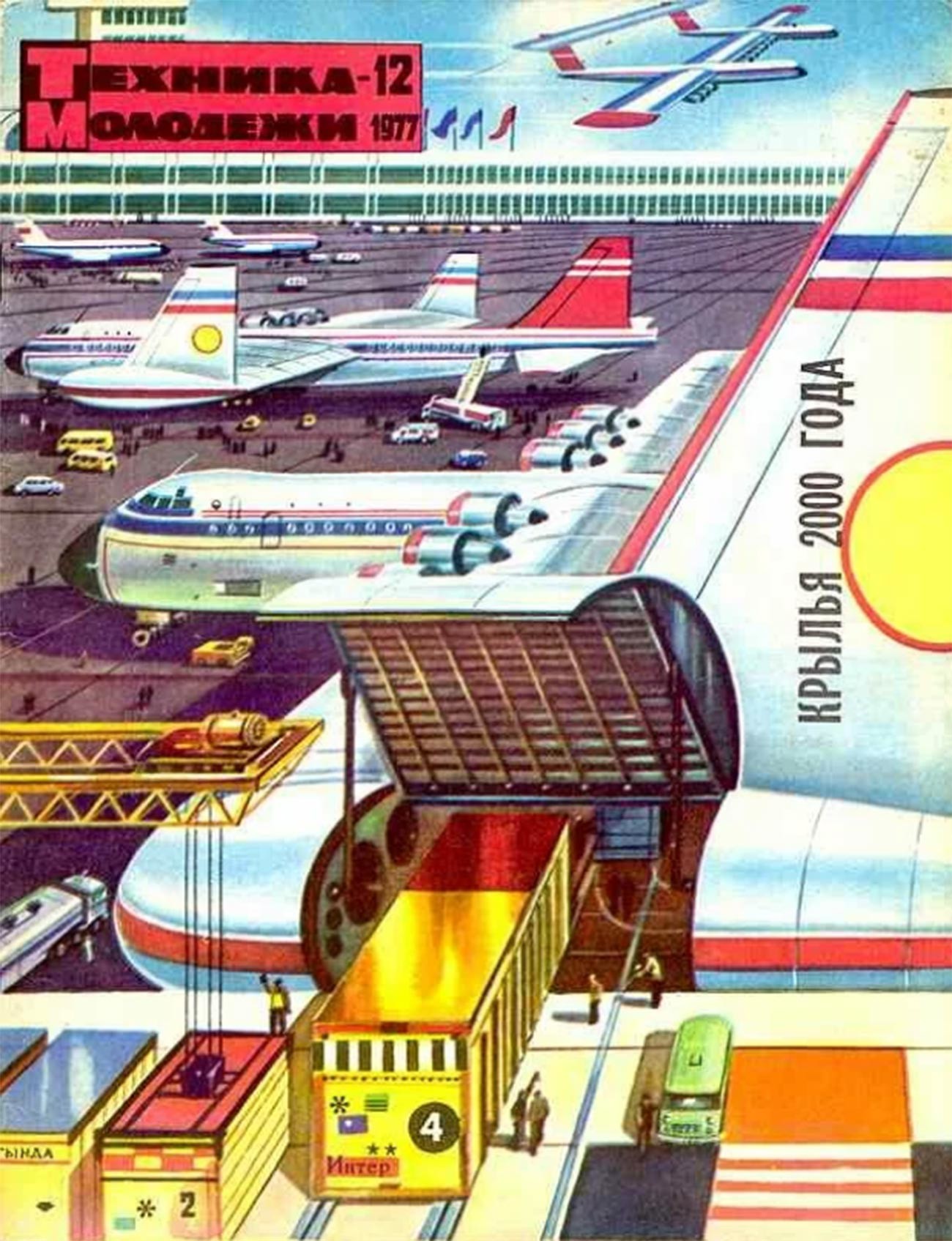 This illustration looks like a Soviet’s engineer’s shot at designing a sports car akin to a Lamborghini or Ferrari. 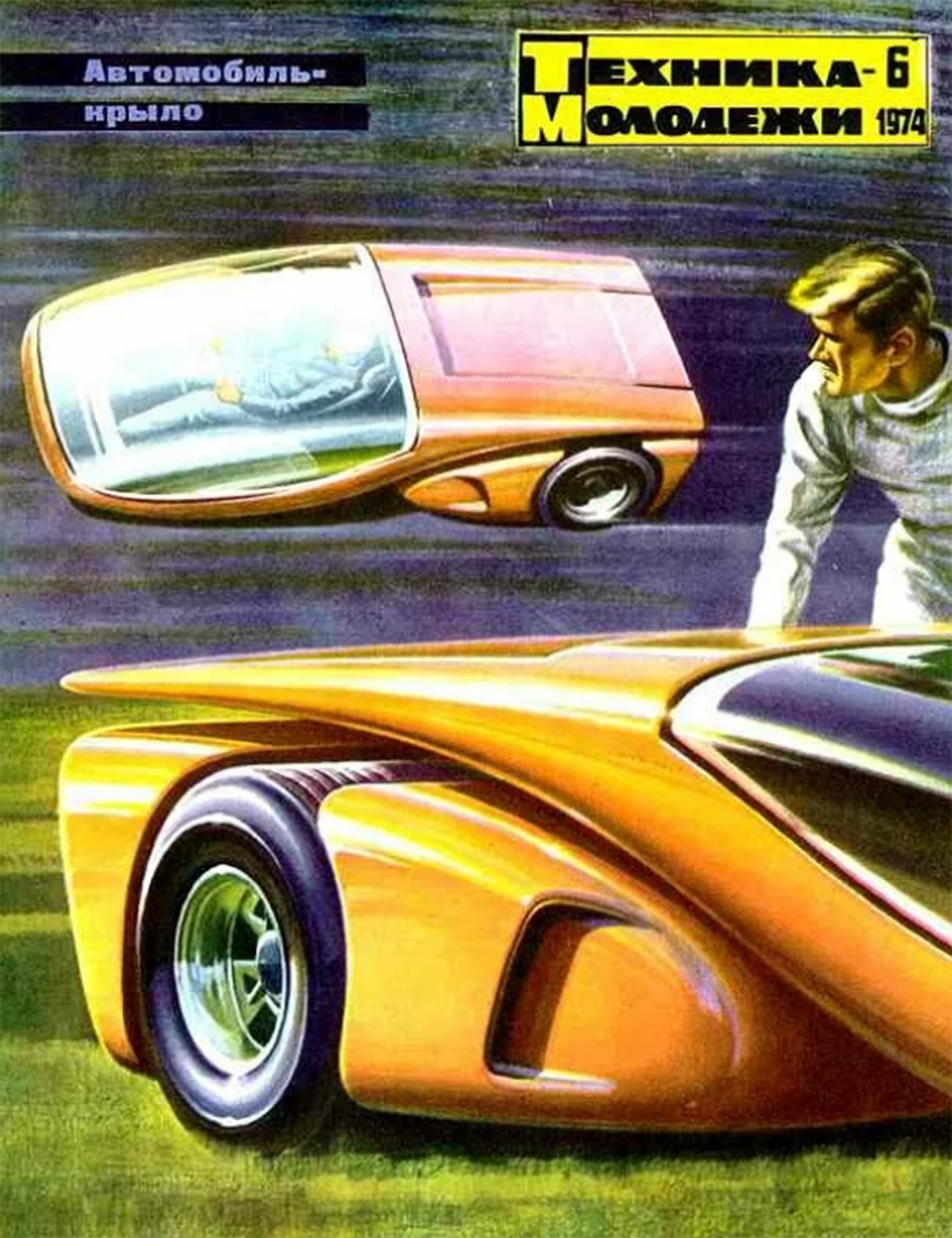 In 1975, the Soviet writers seemed to be obsessed with the idea of electric vehicles. This illustration shows a prototype of an electric train that didn’t require a railway for operating. 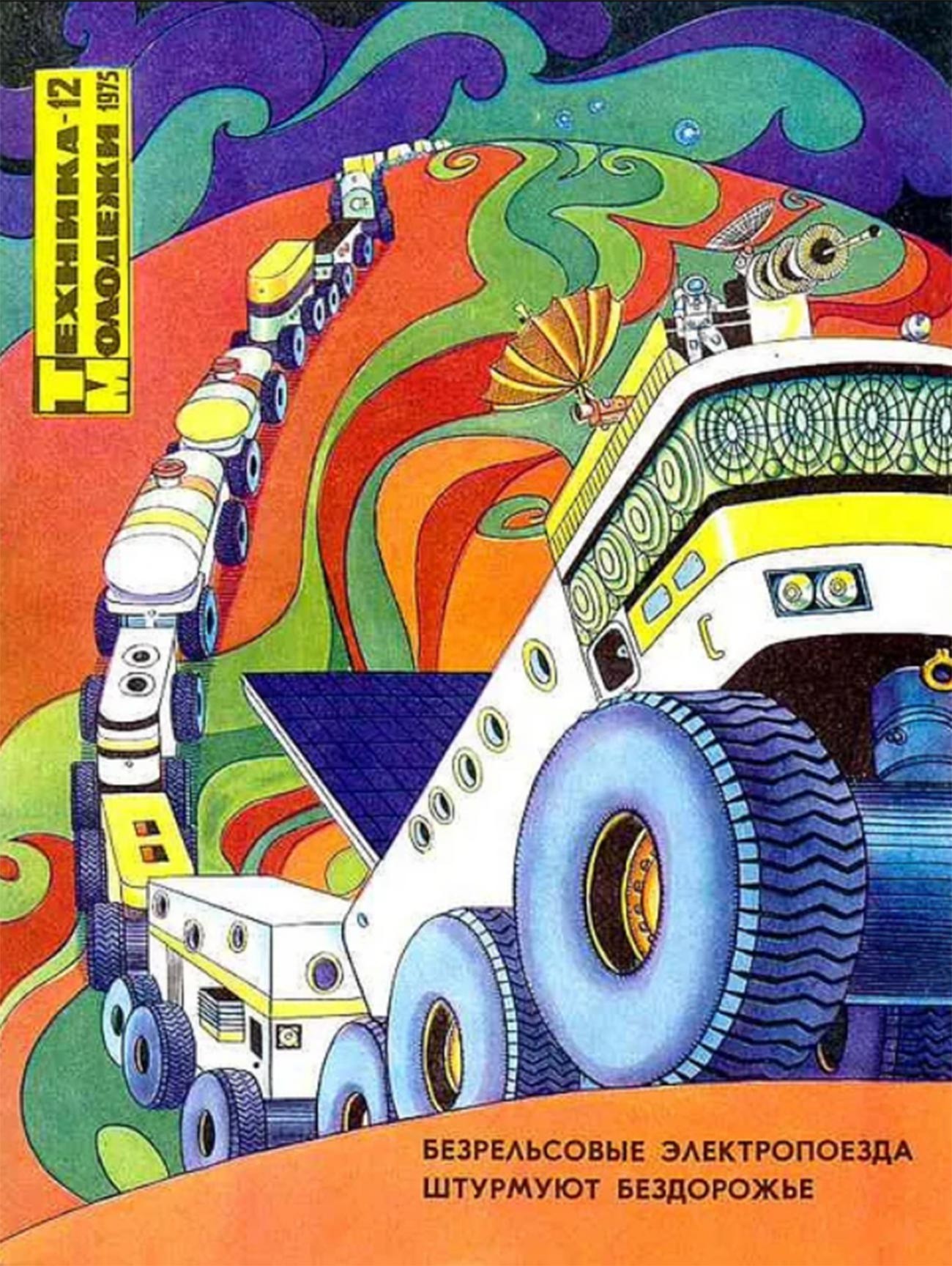 Elon Musk’s ‘Hyperloop’ idea — a proposed high-speed mass transportation system — may have come from this issue, which speculated about trains using magnetic fields (maglev) to generate never before seen speeds. But what once was a dream of the Soviet visionaries has become a reality, after China recently unveiled its own maglev train for commercial use in Shanghai in 2021. 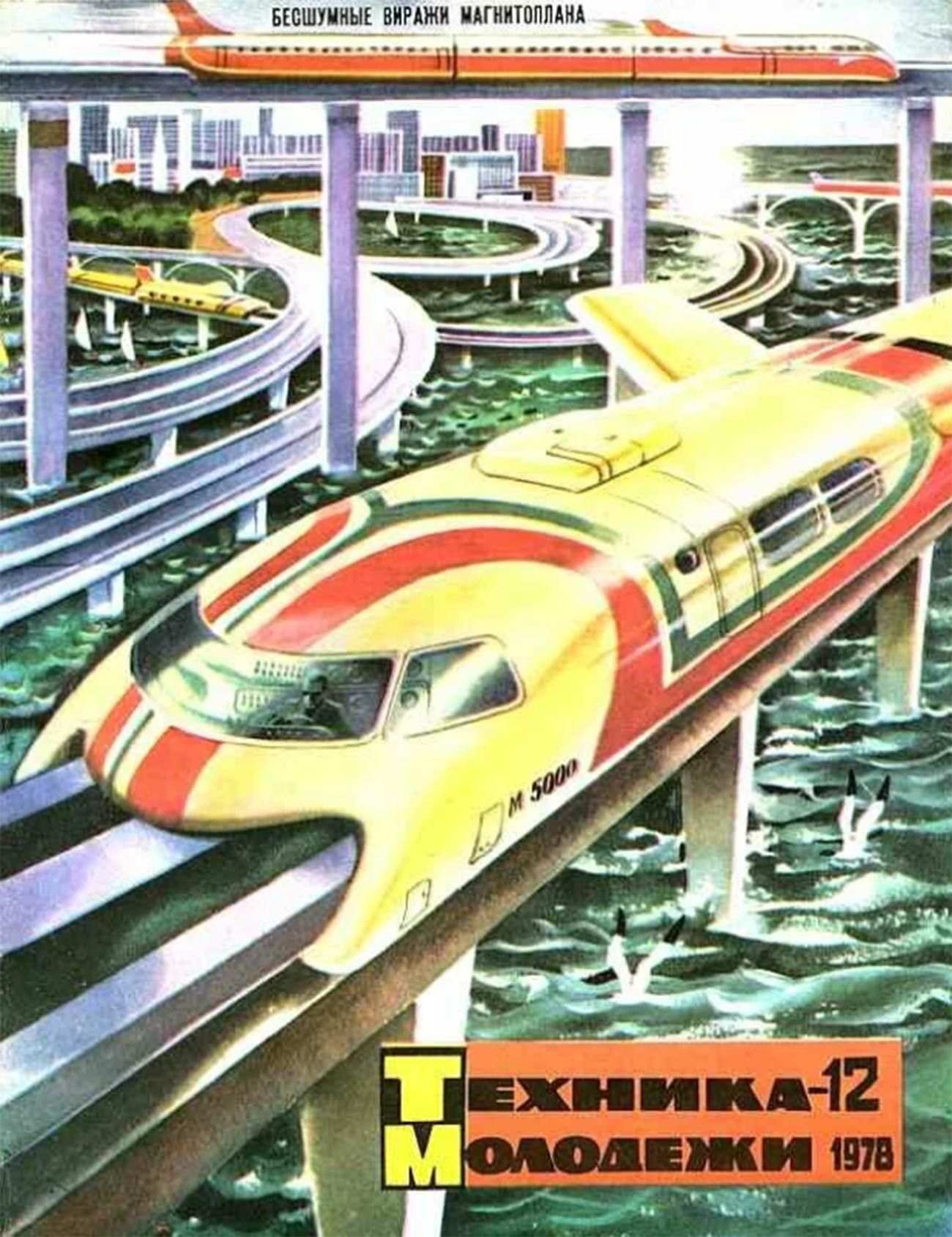