How the Russians captured Beijing 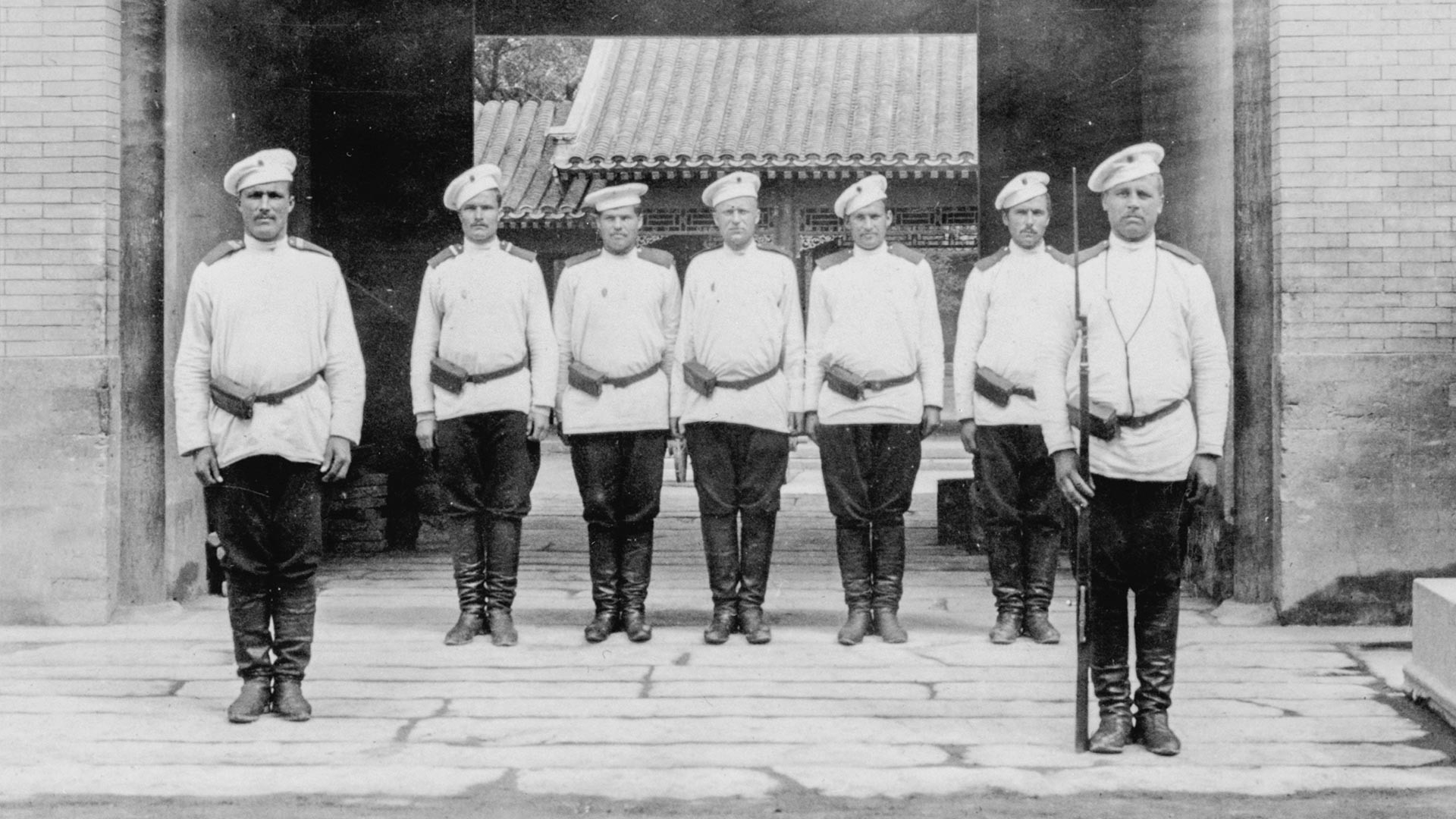 Universal History Archive/Getty Images
The Great Powers jointly stormed the Chinese capital in 1900. But it was Russian troops who were the first to hoist their flag over the walls of the ancient city.

In the late 19th century, the once mighty Qing Empire was in a pitiful state, practically a semi-colony of the European powers, the United States and Japan, who were mercilessly exploiting it in their own interests. Unable to offer any resistance to outside pressure, the country's political elite was concerned only with maintaining power and extracting whatever benefit it could from the situation. Meanwhile, the overwhelming majority of the Chinese population became rapidly impoverished. 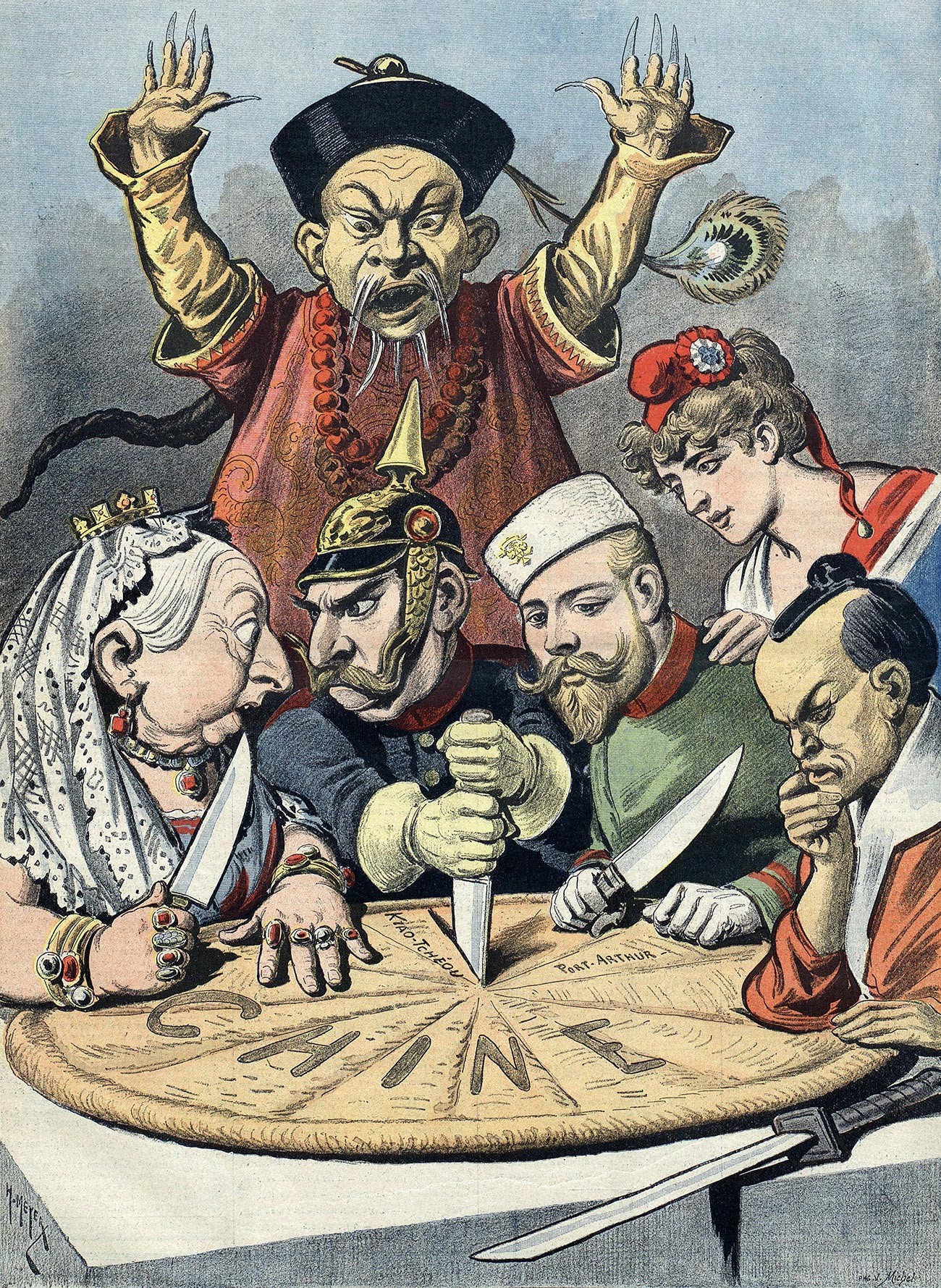 Chinese dissatisfaction with foreign domination led to the creation of the so-called Militia United in Righteousness (Chinese: Yìhéquán), whose members became known as the Boxers, because many of them practised martial arts. 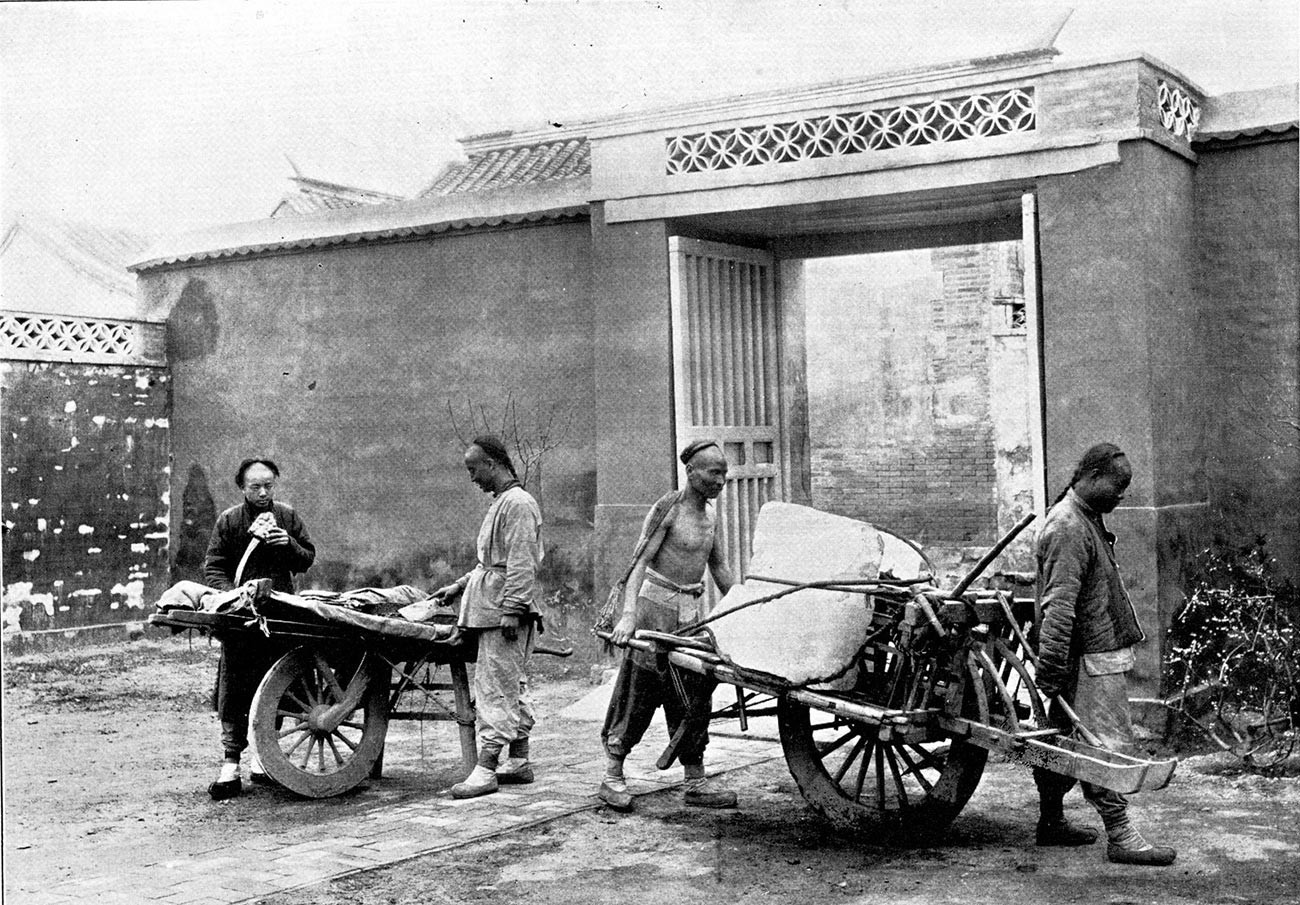 In 1899, the Boxers staged a major uprising against the "overseas devils", who, as they believed, were introducing alien and dangerous practices to the Middle Kingdom, undermining the centuries-old foundations of traditional Chinese society. The Boxers murdered foreigners, including Christian missionaries, as well as fellow Chinese converts to Christianity. “Not content with destroying and burning churches and monasteries, the Boxers killed almost the entire Orthodox flock and numerous Christian Albazinians [descendants of Russian Cossacks who settled in China from the 17th century] both in the mission itself and the vicinity... The corpses of our Christians were thrown into wells, together with the living... even trees were cut down. The Boxers also desecrated the Russian cemetery outside the city walls, destroyed the gravestones and discarded the bones of the buried,” Russian diplomat Ivan Korostovets described the rout of the Russian spiritual mission in Beiguan. 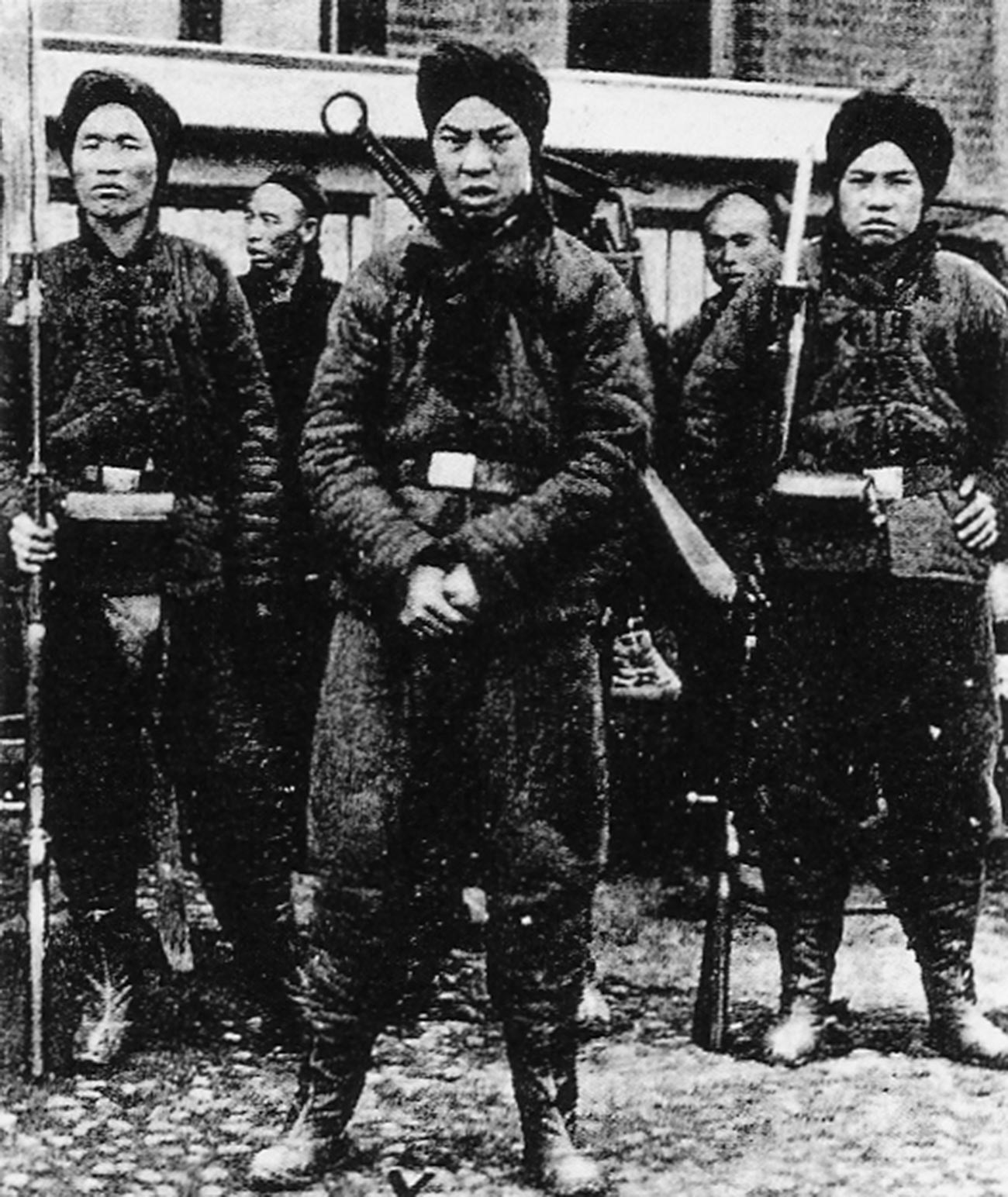 The government of Empress Cixi was unable to suppress the uprising, and itself soon joined it, whereupon there began a large-scale intervention of the so-called Eight-Nation Alliance: Russia, Germany, Britain, France, the US, Japan, Austria-Hungary and Italy. In June 1900, the Chinese attacked the Russia-owned Chinese Eastern Railway in Manchuria, and laid siege to the Ambassadorial Quarter in Beijing, where foreign diplomats and their family members had taken refuge under the protection of several hundred soldiers. “During the two-month siege, the first three weeks were the most difficult and suspenseful for us, when at sunrise we didn’t know if we’d be alive by sunset, and at sunset by sunrise,” recalled physician Vladimir Korsakov, an eye-witness. 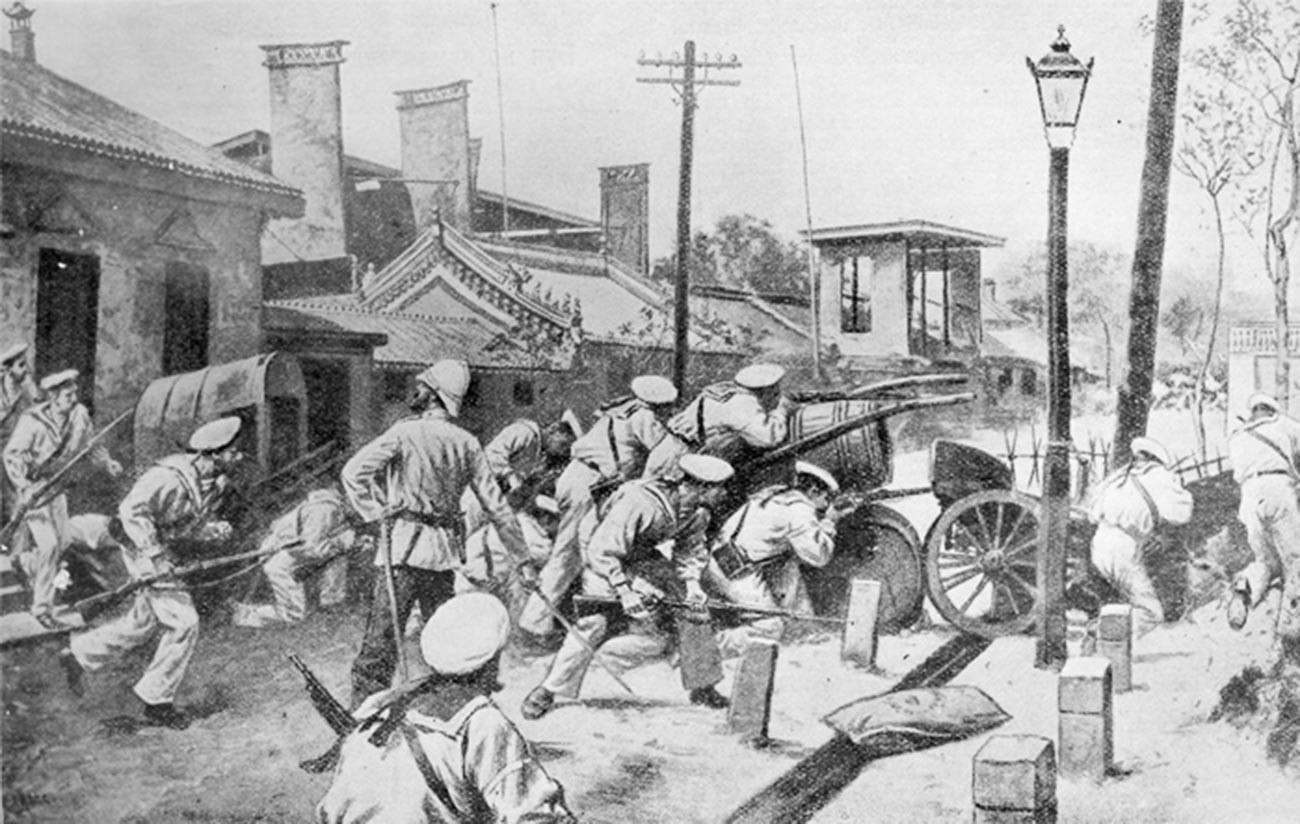 Despite their numerical advantage, in terms of combat ability the Qing troops and Boxer units were clearly inferior to the allies. “The Chinese soldier is not a coward, but he is not trained to be brave, he is not trained to control himself, he is not used to being a soldier like a European,” noted Korsakov. After the capture of the Dagu Forts at the mouth of the Hai River and the seizure of Tianjin, the Alliance troops set their sights on the capital. The 30,000 defenders of Beijing were opposed by 9,000 Japanese, 5,000 Russian, 2,000 US and 800 French soldiers, plus 3,000 Indian sepoys sent by Britain. 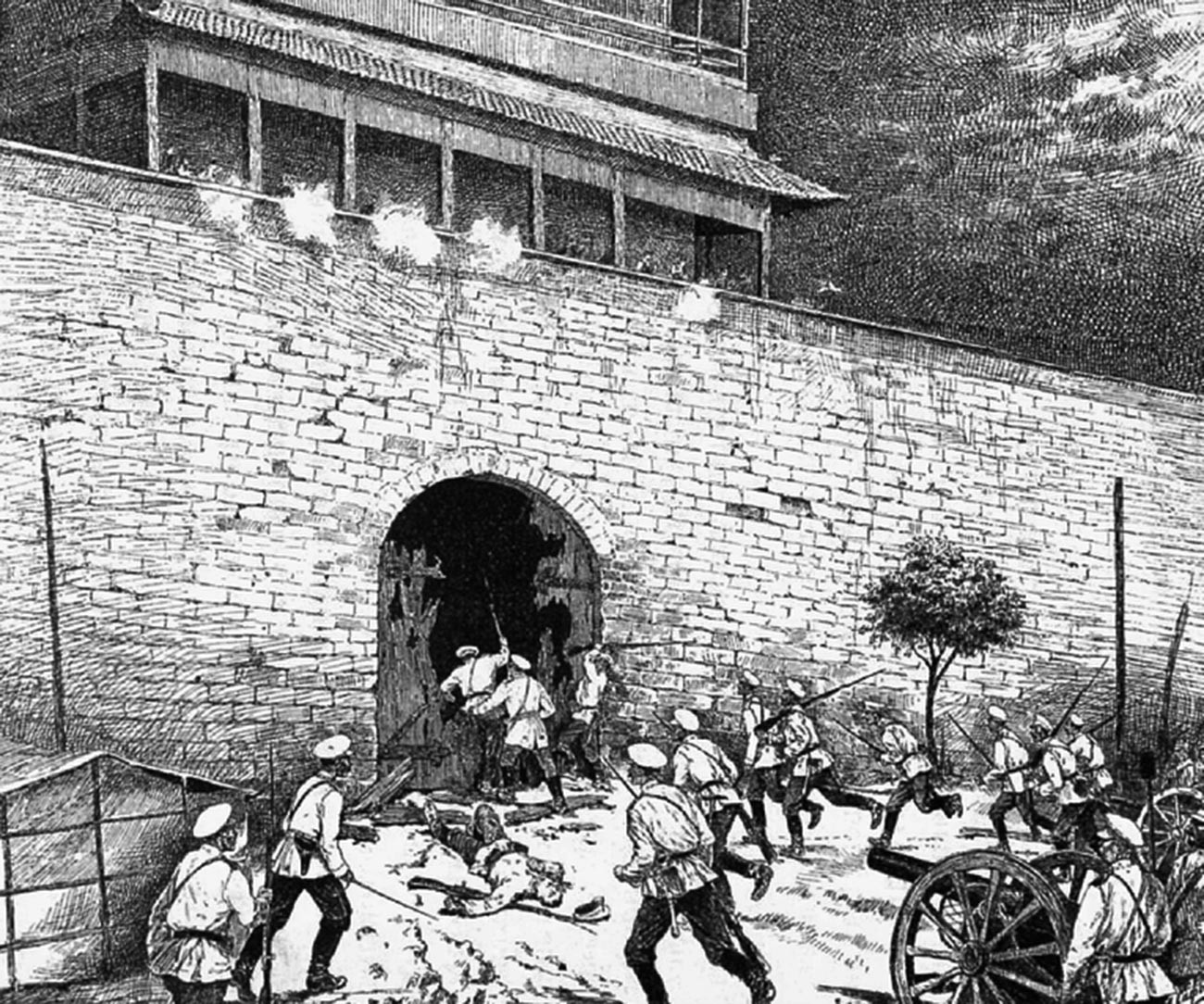 The Russian troops were the first to attack. On the night of Aug. 14, the company of Staff Captain Yaroslav Gorsky caught the guard at the Dongbianmen Gate, part of Beijing’s fortifications, unawares, after which they destroyed it with artillery fire. The soldiers penetrated inside and gained a foothold on the wall, hoisting the Russian flag over it. “The thunder and lightning of guns, the abrupt volleys of our riflemen, the chaotic shooting of the Chinese and the menacing roar of the Russian machine guns, the gates and majestic walls of the thousand-year capital blackened from centuries in the half-moonlight... This was the first Russian assault on Beijing,” war correspondent Dmitry Yanchevetsky described the scene. 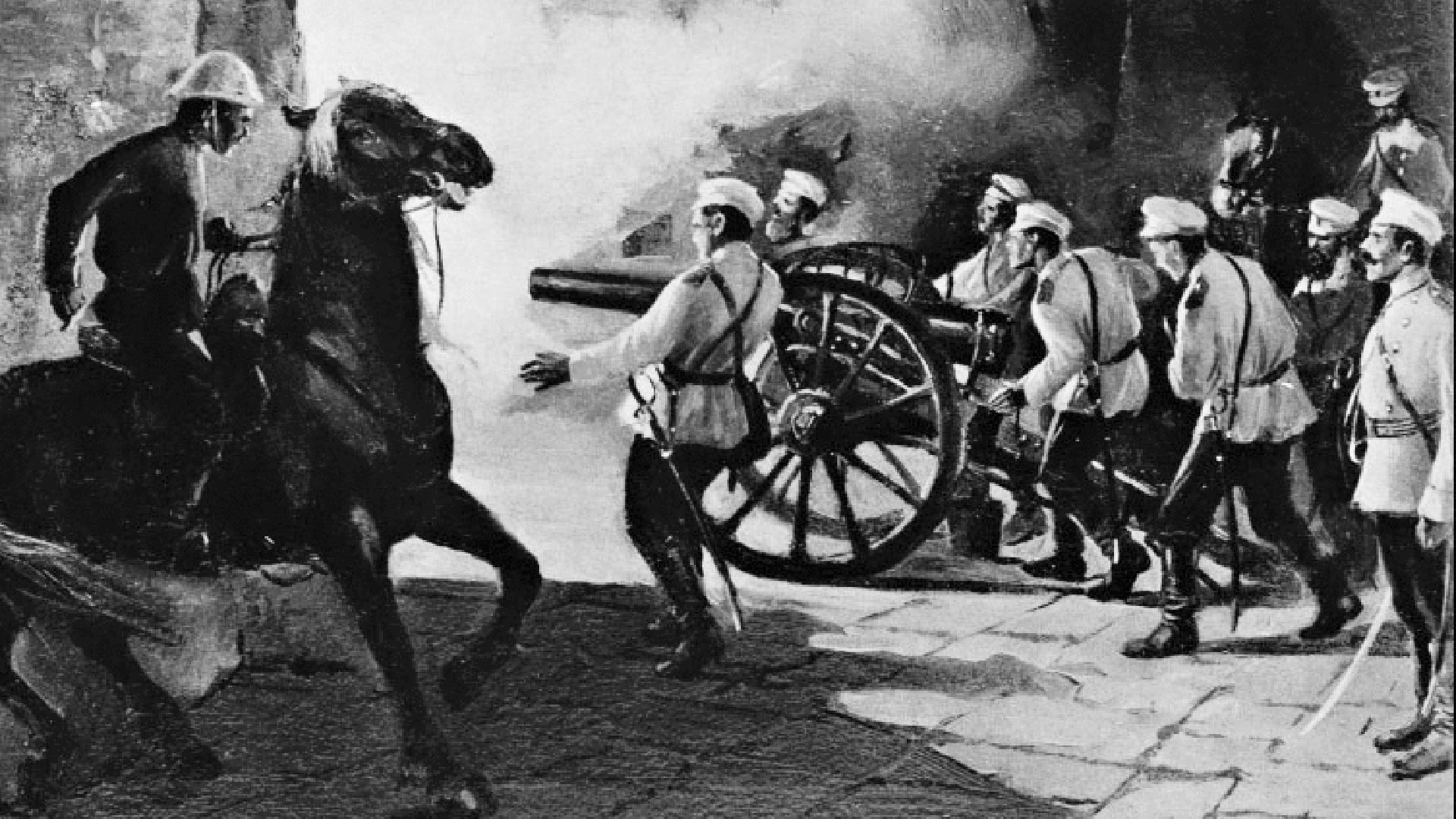 Russian cannons firing at Beijing gates during the night.

The allies began storming the city only in the morning. For a whole day, the Japanese detachment faced fierce resistance at the Qihuamen Gate, and even requested Russians artillery support. At the final stage, the Americans joined in the fighting, while the British and French entered the city virtually unopposed. The Alliance troops broke the blockade of the Ambassadorial Quarter and were in control of the city by nightfall. The greatest losses in the operation were suffered by the Russians and the Japanese — about 60 killed and 200 wounded. 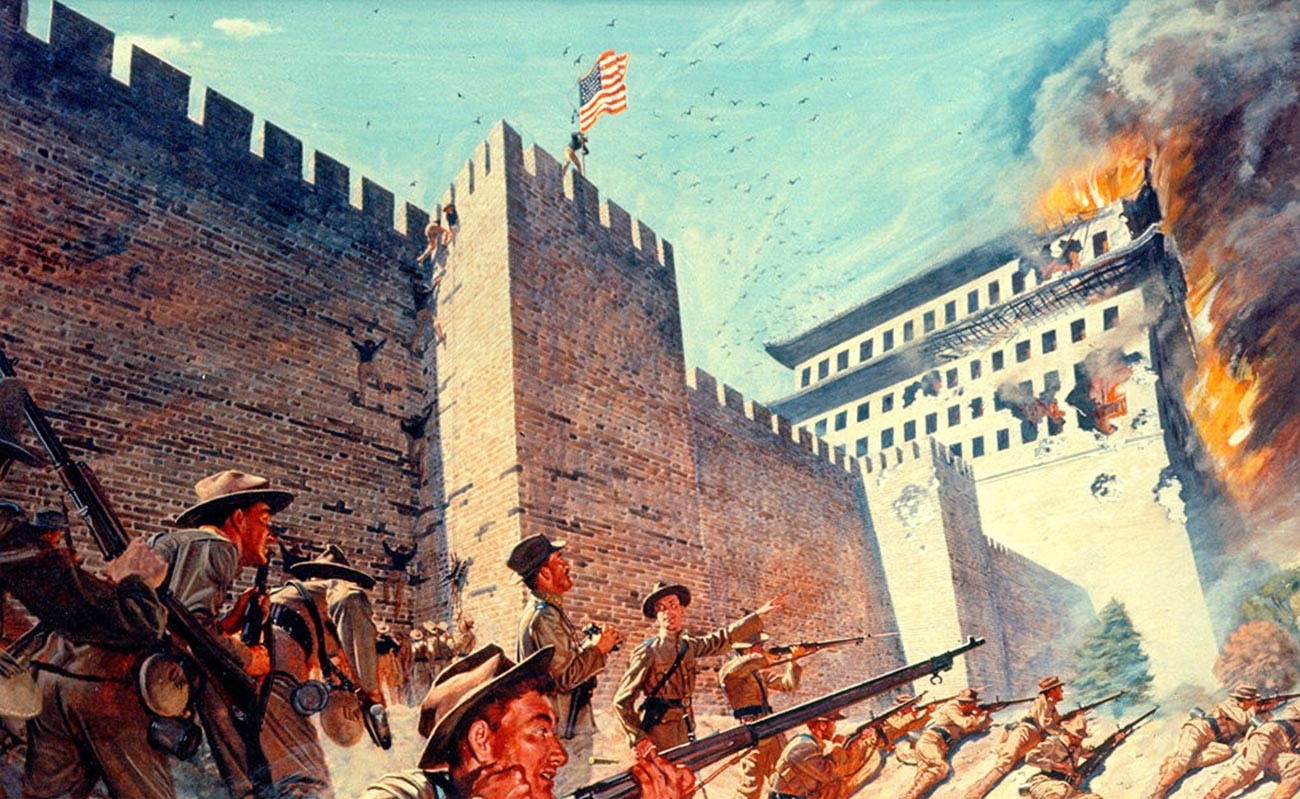 On Aug. 15, after brief shelling by US artillery, the allies occupied the Forbidden City palace complex, which Empress Cixi had already deserted. Over the following days, the occupying forces subjected the city to devastating looting, accompanied by the killing of Boxers, government soldiers and civilians. For long afterwards, the Alliance powers accused each other of committing these atrocities, shifting all the blame onto their partners. 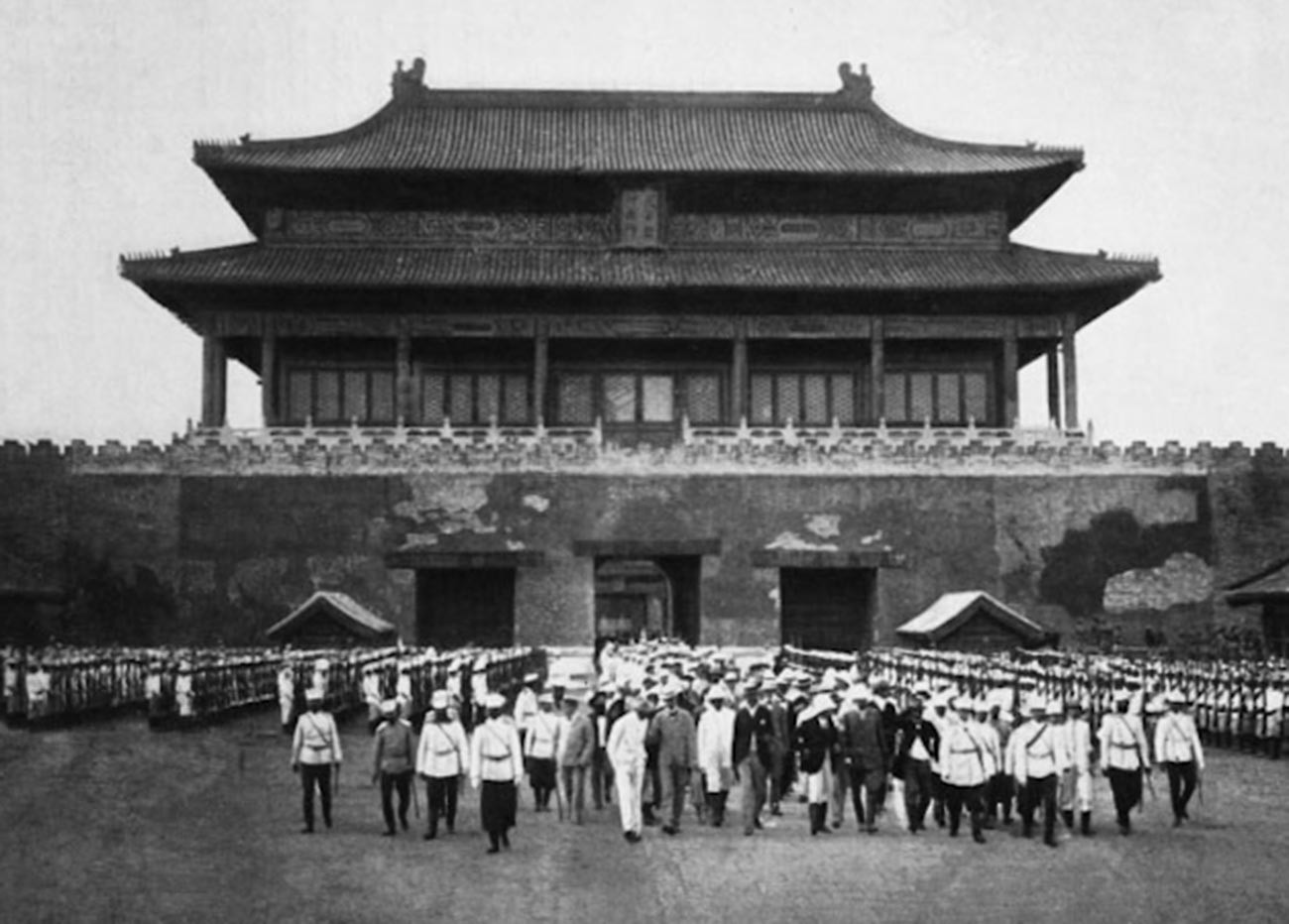 After the capture of Beijing, the Russians defeated the enemy in Manchuria and temporarily took full control of the region, allowing them to rebuild the Chinese Eastern Railway. In September 1900, Empress Cixi did a volte-face, ordering her troops to root out the Boxers nationwide. A year later, the Boxer Rebellion was largely suppressed, and the allies forced China to sign the Boxer Protocol, which imposed, inter alia, the payment of indemnities, a two-year ban on the import of weapons and ammunition, the destruction of the Dagu Forts and the transfer to the European powers, the US and Japan of a number of strongholds stretching from the coast to the capital. 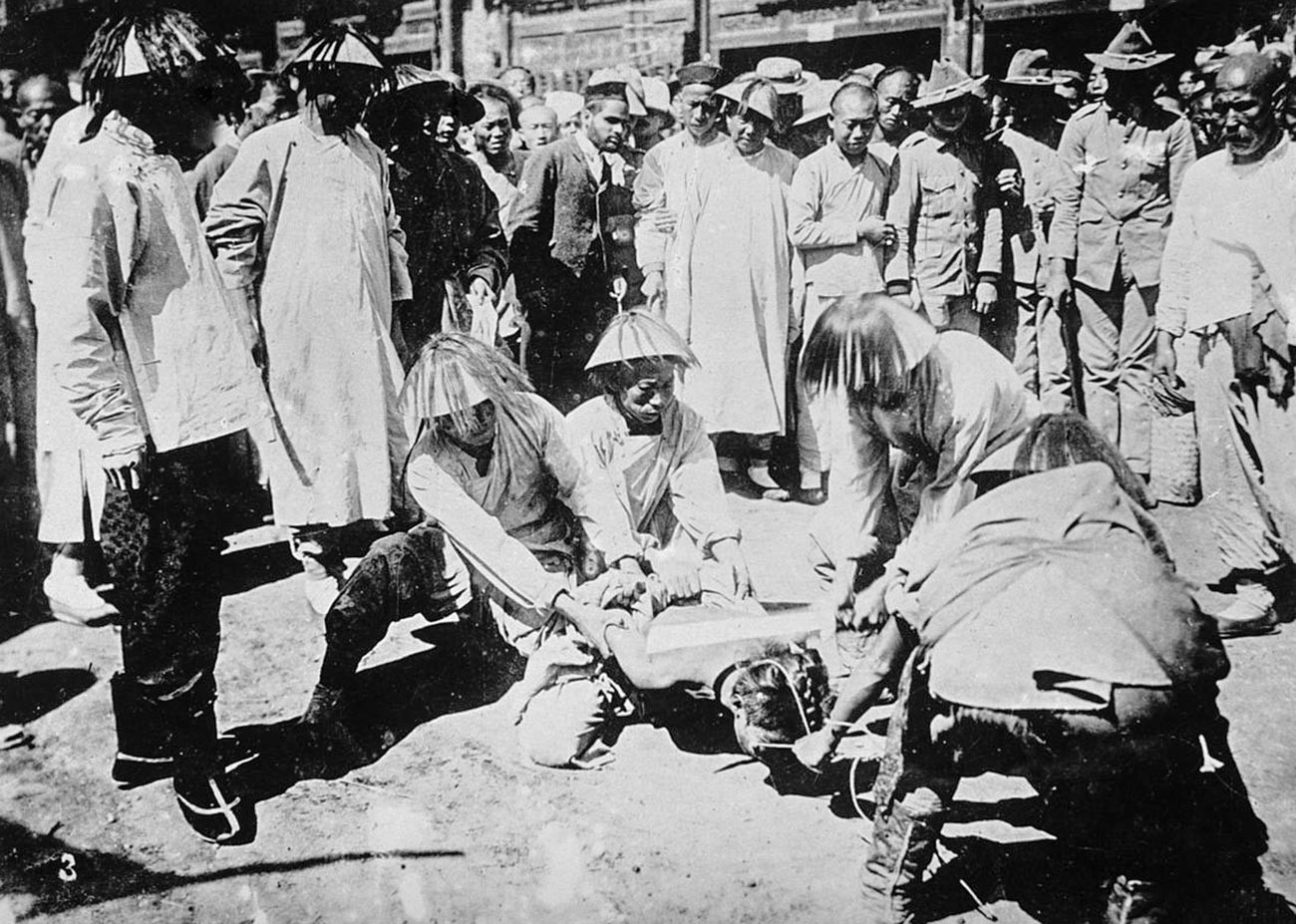 A Boxer being beheaded infront of a crowd of Chinese.

“Beijing was taken by the blood and sweat of two loyal allies: the Russians and the Japanese, with whom we, under fire and cannonballs, experienced a brotherhood-in-arms for the first time,” wrote Yanchevetsky. This relationship did not last long, however. Within a few years, a fierce war broke out between the two empires, which ended in disaster for Russia and seriously shook its standing in the Far East. 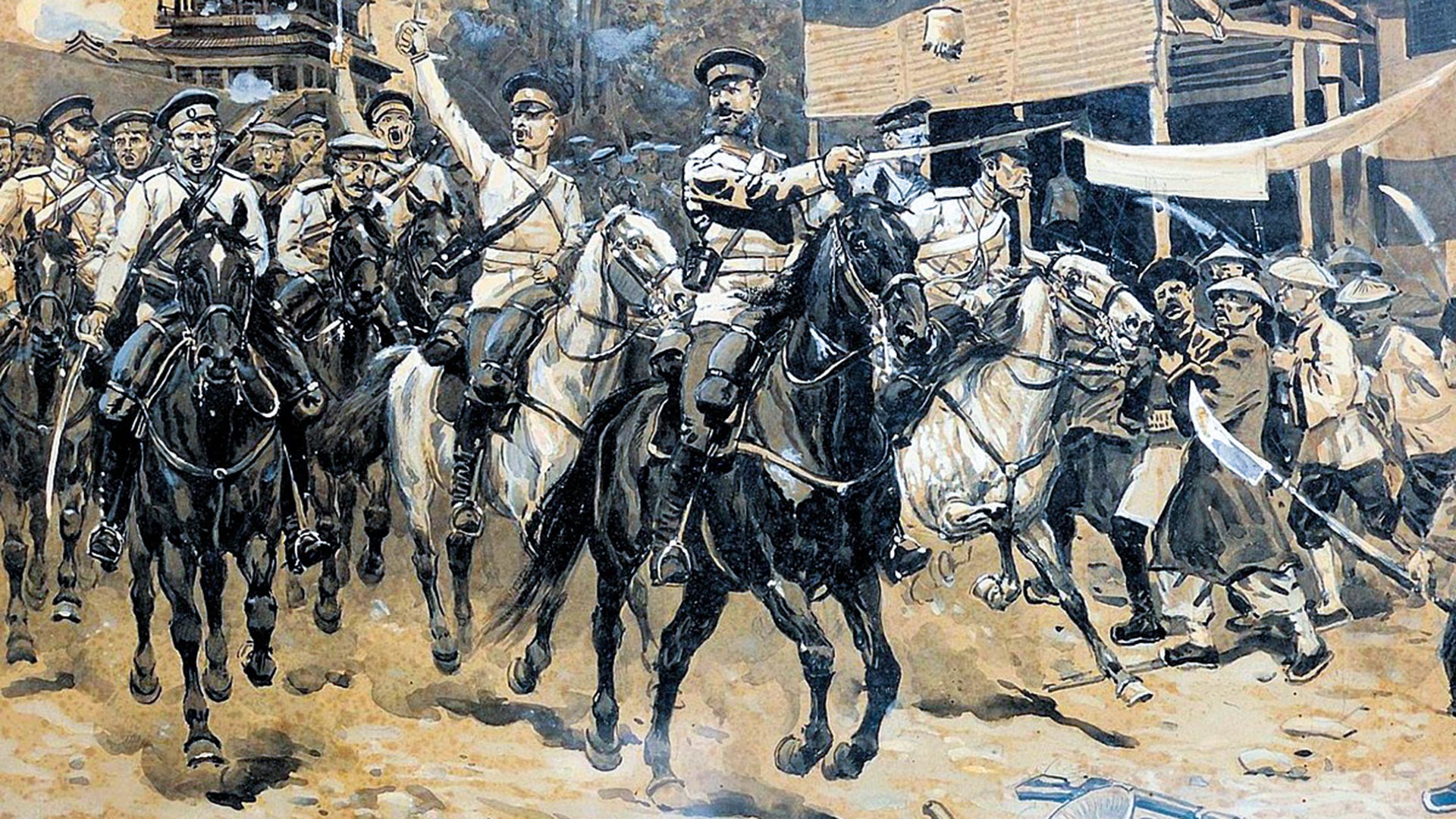