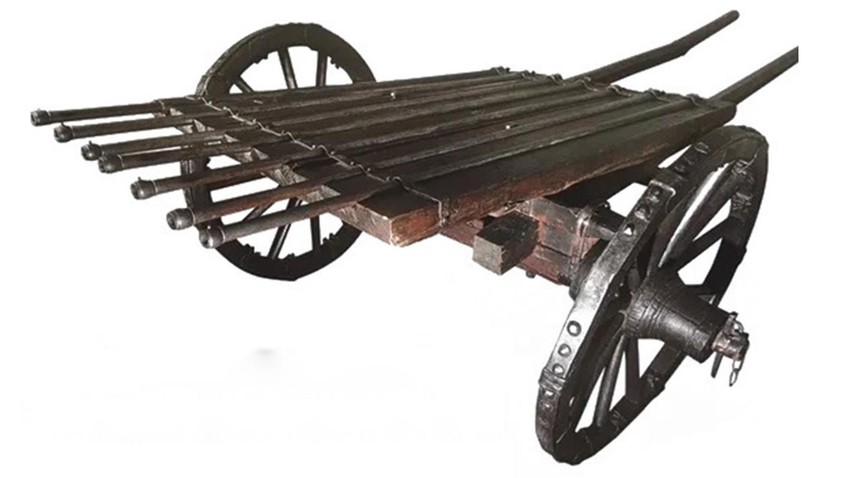 Ministry of Defense of Russian Federation
Turns out prototypes of rockets were known in Russia in the 16th century – but the tsars had even more up their sleeves. Most of this warfare, however, was made by foreign engineers.

“Colonel Bauman showed a drawing of a huge mortar to be cast in Tula at the Marselis foundry from 150 tons of metal,” Andrey Rhode, the secretary of the Danish embassy to Muscovy, wrote in 1658. “The grenade for this mortar, which was supposed to be cast of about 6 tons of iron, was so high that it reached from the ground to the chin of a rather tall man. 80 kilograms of gunpowder were required to fire that mortar.” The weights of the weapon and the grenade seem enormous. Was casting such a mortar and grenade even possible?

“I bet this project didn’t go further than the blueprint,” Georgy Kizhlo, author of ‘Something about arms’ military podcast, says. “It’s a common practice in heavy artillery production. The main thing is to show the bosses that there are ‘no analogues in the world’. The bosses are happy and do not ask questions. They give money for the development and the development shows that there is no such thing in the world because nobody needs it. But hey, we invented a chin-high grenade, the enemy will shiver just at the thought of it!” 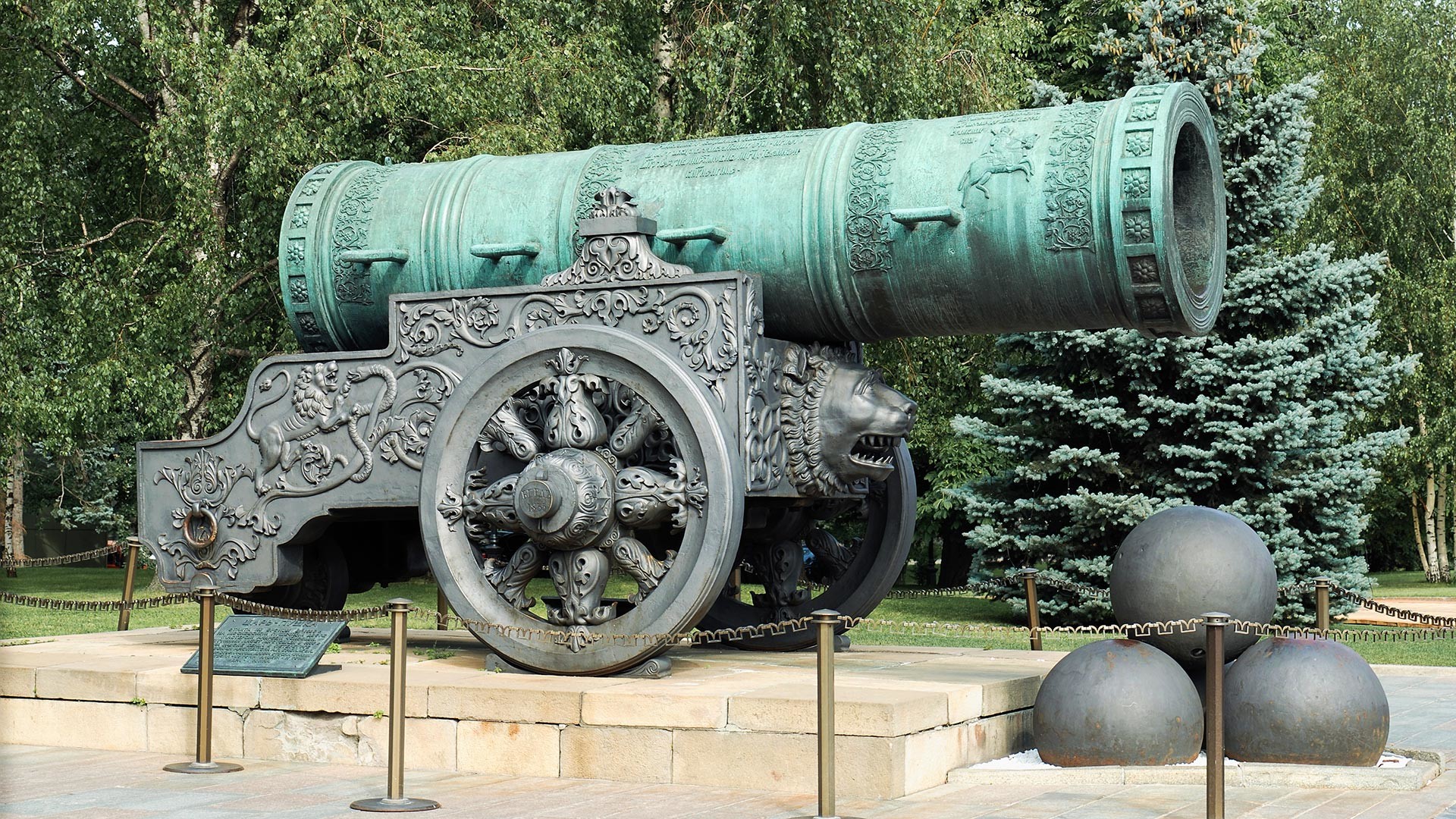 The Tsar Cannon at the Kremlin, Moscow

Indeed, Colonel Bauman’s giant mortar was never cast. But this historical episode shows that in the 17th century, Russian tsars really wanted impressive weapons and were ready to finance their production. In fact, Russians did have some “secret” weapons produced by the foreign-born engineers – in fact, most of the early Russian artillery was made by foreigners. Let’s look at the most strange and impressive of those guns.

The idea for a soil gun was borrowed from Friedrich Getkant, a German who served the Polish Commonwealth. One of his apprentices, Hans Timson, later served Colonel Bauman in Moscow and, under scrutiny, gave out Getkant’s secrets. Historian of Russian artillery Aleksey Lobin discovered the description of how this “soil gun” was constructed.

“A large cylindrical pit was dug in the solid ground, with a smaller hole (a powder chamber) inside. The walls of the pit and the chamber were lined with boards fastened together with ropes and hoops. Gunpowder was poured into the chamber, covered with a wooden shield. A long fuse was stretched out from the camera. Grenades and stones of various sizes were placed on the shield! After the ignition of the gunpowder, the deadly projectiles flew up and then fell down, covering large areas.”

The soil guns fired projectiles with a total weight of 16 to 32 kgs and were expendable – after a certain amount of shots, such a gun became unusable because the shots damaged and burned its wooden insides.

The main catch in building a soil gun was to have the right calculations, right proportions of the pit and the chamber. Hans Timson reconstructed Getkant’s guns and presented them at the military drill in Vagankovo, Moscow, in 1672.

The only time soil guns were actually used in battle was during the siege of Solovetsky monastery (defended by the Old Believers) in 1674-1676. The main reason was that Solovetsky monastery is situated on a remote island – transporting heavy bronze cannons to this location was nearly impossible, so it was better to construct soil guns right on the spot. Six soil guns were made, firing bundles of iron nails and combustible projectiles. However, by the end of the 17th century, the secret of the proportions for a soil gun was lost. 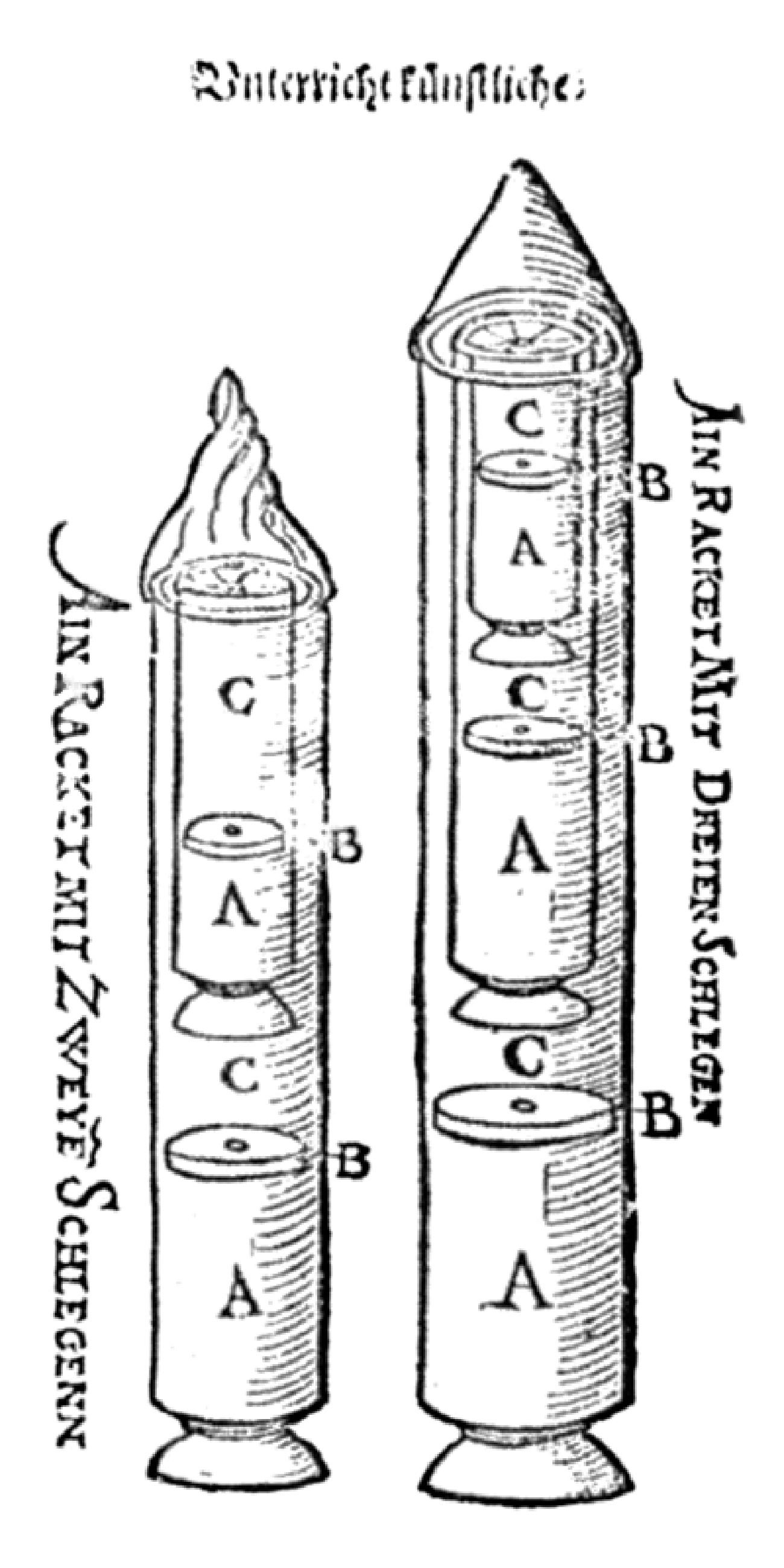 A prototype of rocket by Conrad Haas, 1529

During the siege of Chigirin in 1674, Alexey Lobin writes, sources describe a prototype of a rocket – really a combustible projectile, constructed by an unknown foreign major in Russian service.

“Six meter logs were hollowed out and stuffed with gunpowder in different proportions. These logs were to be projected beyond the city walls. The enemy would not be able to quickly put out the fire caused by the logs because of the heavy air (smoke) around them that makes them hard to approach. Two logs were made and brought to the entrenchments and there are more to come.”

The question is how these “rockets” were projected beyond the walls – probably with some sort of catapult? 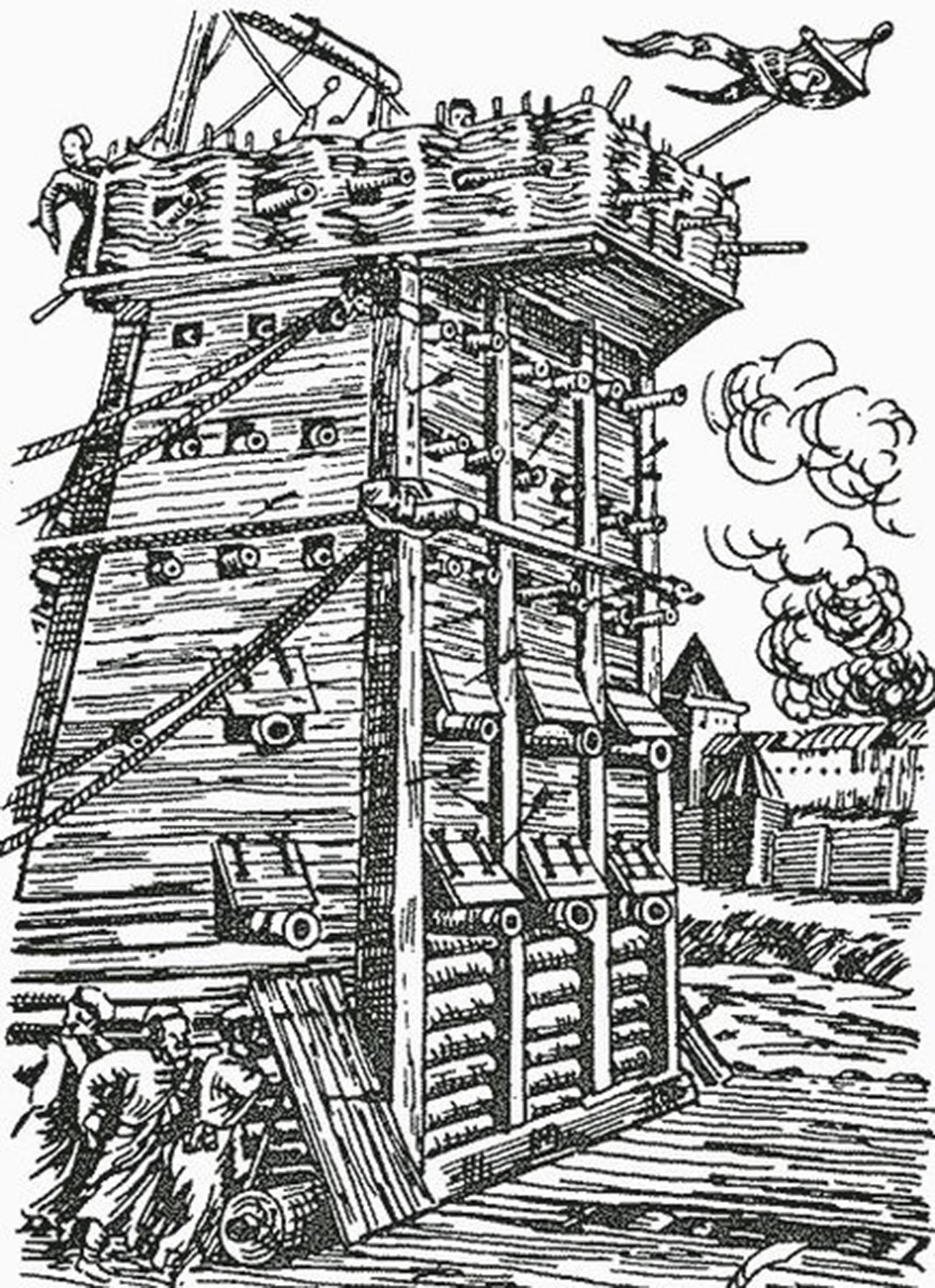 The siege tower with cannons that was used to take Kazan

In 1552, a 150-thousand army was brought by Ivan the Terrible to Kazan, the capital of Kazan Khanate, a Muslim feudal state. The citadel of Kazan had walls made of wood and stone, up to nine meters thick, with four massive towers with gates, all of it surrounded by wide moats. The fortress was impossible to conquer without heavy artillery. It took three months to bring about 150 guns from Moscow to Kazan and seven days to assemble the artillery. After weeks of heavy fire, the citadel was still intact and the defenders continued firing projectiles and arrows from behind the walls.

Tsar Ivan had Italian and German artillery engineers at his disposal, who constructed cannon towers – they were made out of wood from nearby forests. They were three-tiered siege towers with loopholes for cannons on all tiers, which allowed for shooting at objects behind the fortress wall “like from heaven”, according to the chronicle called ‘Kazan Story’. The towers stood on wheels or on logs and gradually rolled closer to the walls, up to six meters from the fortress moat.

This technical novelty, made “how the Italians usually do it”, the chronicle says, partly helped to eventually take Kazan. The siege lasted 32 days and ended when Italian engineers blew up the city walls. 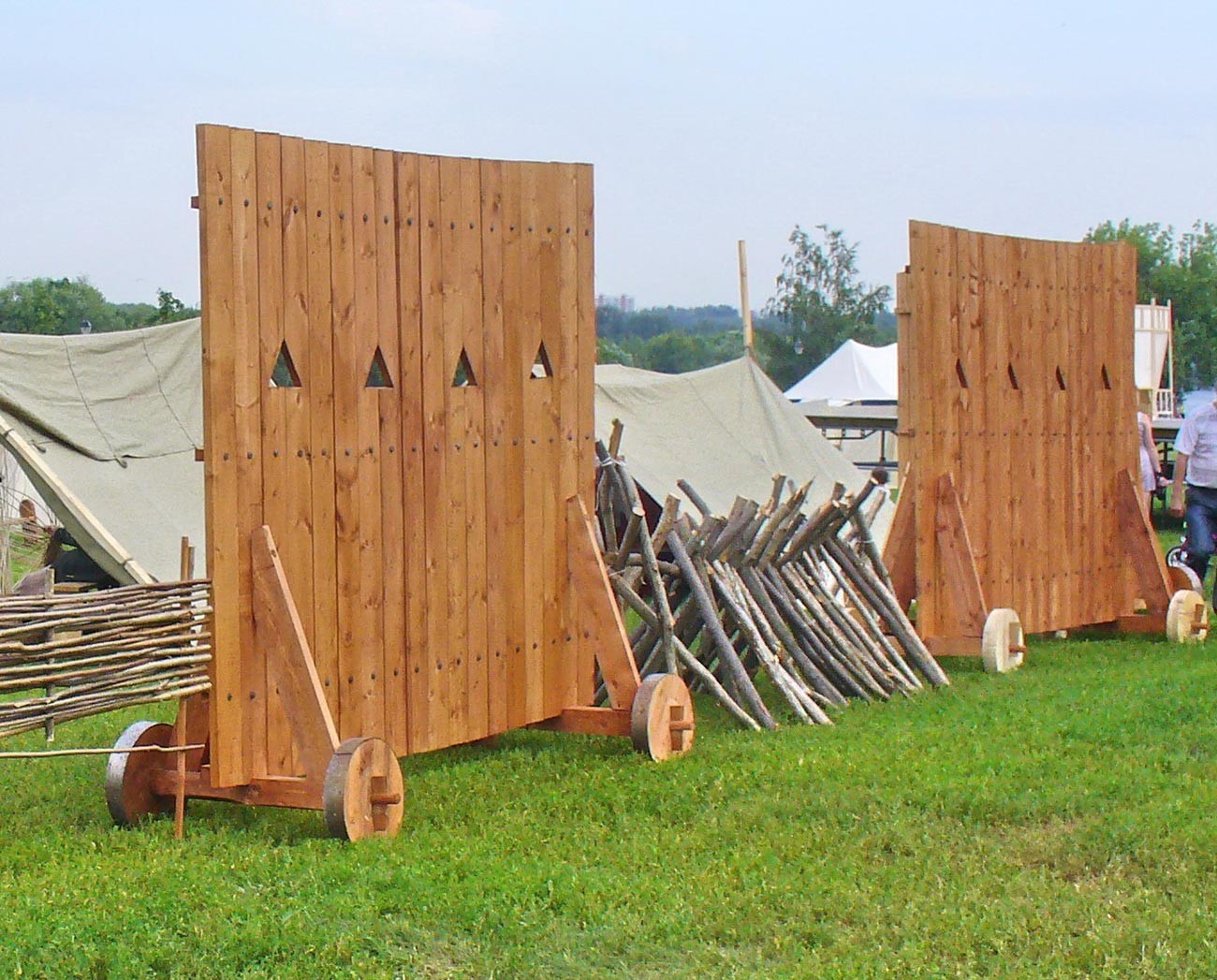 A wagon fort – a rectangle formed out of wagons or carts in an open field during a battle – was a popular type of movable fortification in Europe from as early as the 15th century. But Russians devised their own version of it, called ‘gulyay-gorod’ (“wandering town,” or “walking town”).

A gulyay-gorod was made of wooden oak planks that formed heavy shields. The planks were quickly transported to the site of the battle in a special wagon train. Upon arrival at the place, shields were installed on carts or sleds, depending on the time of year. Passages for troops were necessarily left between the shields – they were connected with chains, which allowed infantry to pass, but still blocked enemy cavalry. Loopholes for rifles and small-caliber cannons were cut in the shields. 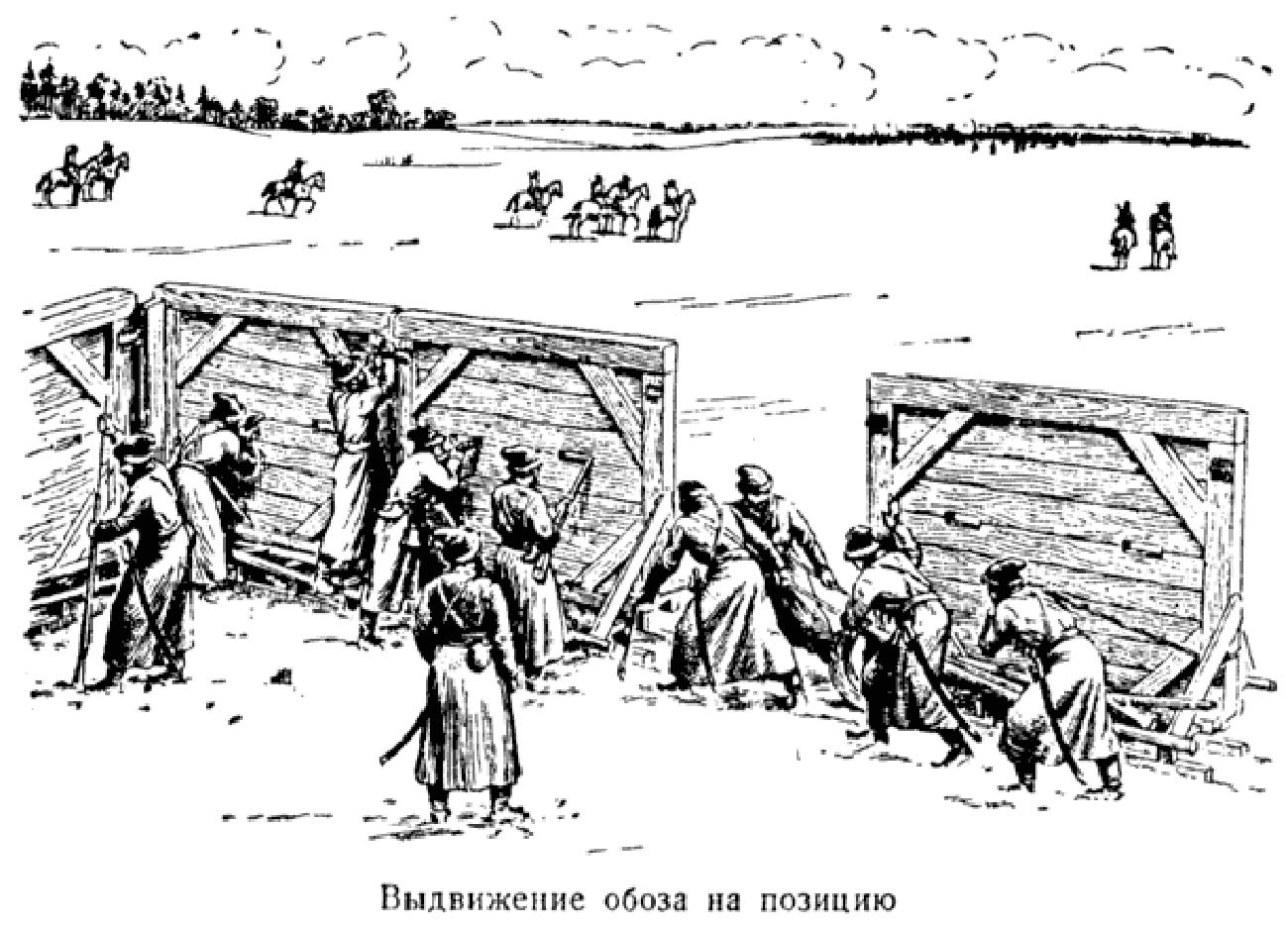 How gulyay-gorod is used in a battle.

They were first used to cover the artillery positions in the 16th century and, later, to protect field infantry from arrows and the Tatar cavalry. Heinrich Staden, a German mercenary, wrote about the attack of the Crimean Khan in 1572 that if the Russians had not had a gulyay-gorod, the Crimean Khan would have achieved success.

In case of major field conflict with Tatar nomadic tribes of the Russian south, the gulyay-gorod could also be stretched! “This marching or mobile fortress is so arranged that (depending on the need) it can be stretched in length by one, two, three, four, five, six or seven miles,” English diplomat Giles Fletcher wrote in his ‘Of the Russe Commonwealth’ in 1591. 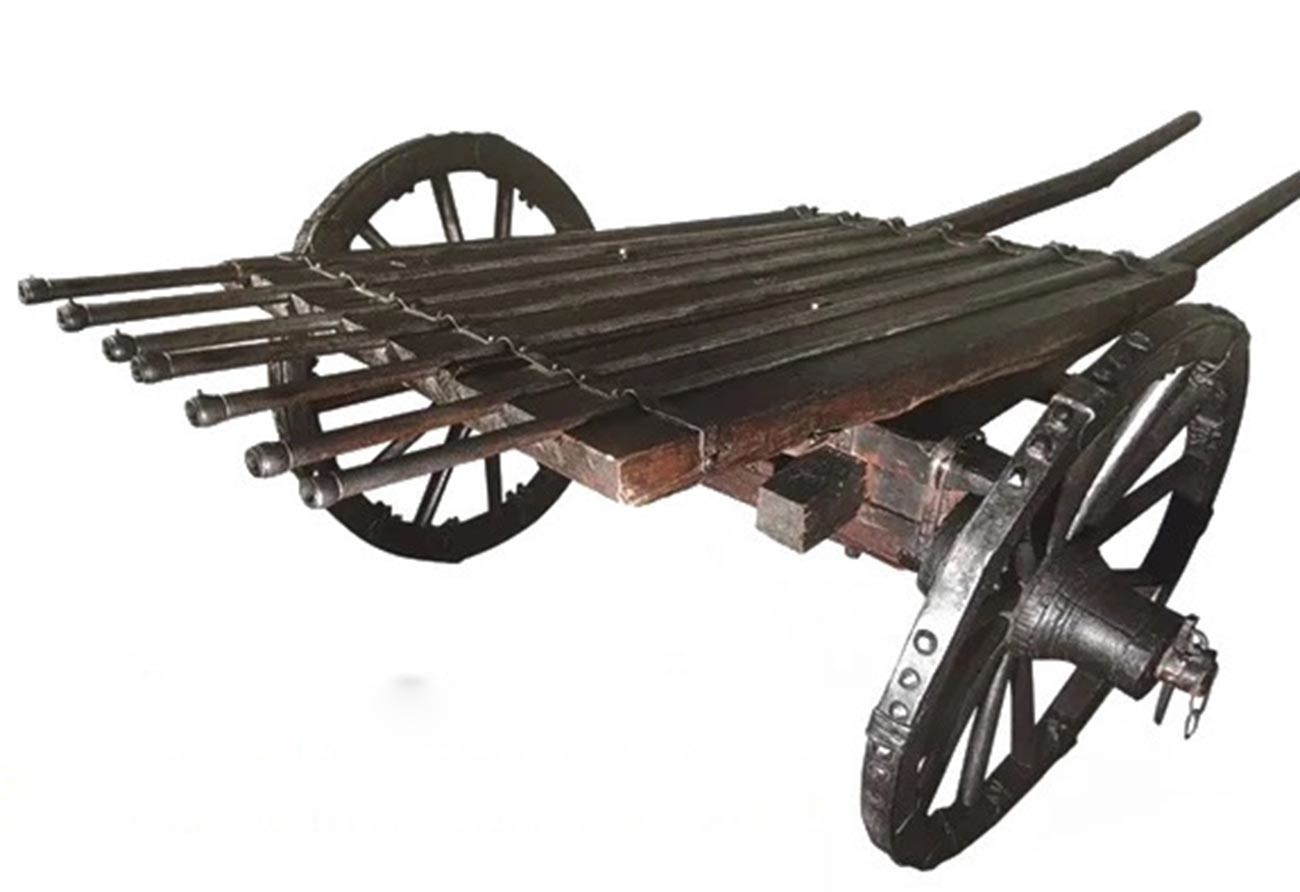 In the second half of the 16th century, Chokhov invented a multi-barreled gun that fired rifle bullets. It was called “Soroka” (Magpie) – probably for the loud high-pitched yaps and the speed of its fire. It was used against enemy infantry. After heavy artillery bombarded holes through walls of the enemy fortress, sorokas were placed in front of the holes to mince the defenders exiting the burning citadel with bullets.

Of course, sorokas could be used as well to protect the cities against enemy infantry. During the reign of Mikhail Fyodorovich, the first Romanov, more than ten central Russian cities had several sorokas in their arsenals. 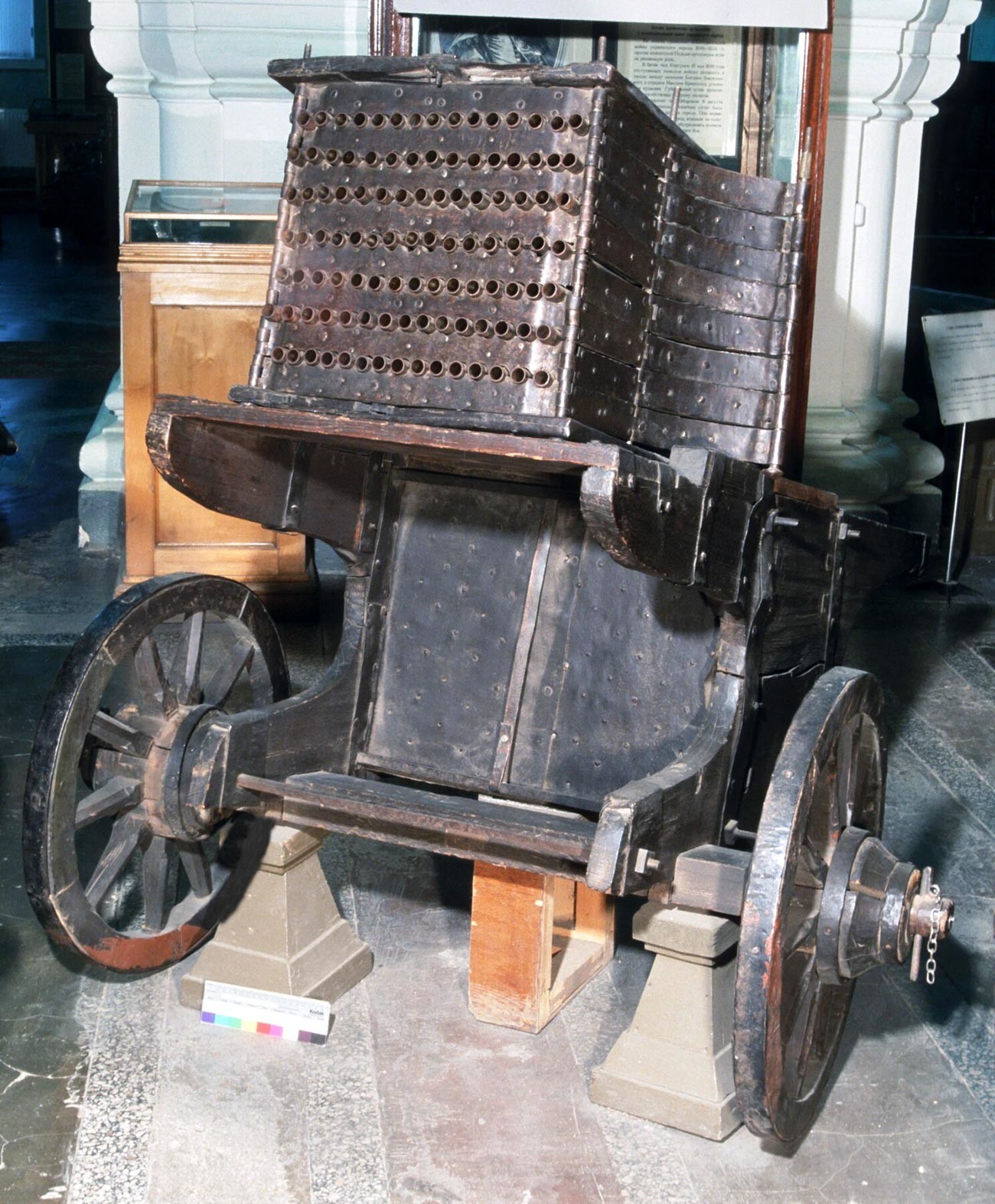 In 1588, Andrey Chokhov created a 100-barreled soroka. The weight was 5283 kg, and the weapon was cast in a single form “with 35 core canals”, according to a 1641 description. The 100-barreled soroka fired little cannonballs “the size of a goose egg” (about 200 grams). In the late 16th century, this most incredible piece of Russian artillery stood on the bank of the Moskva River near the Moskvoretsky Bridge – the passage from the south, in case Crimean Tatars attacked Moscow again. Unfortunately, the 100-barreled soroka was most likely melted down during Peter the Great’s reign.