What part of the USSR was still occupied by the Nazis when Berlin fell? 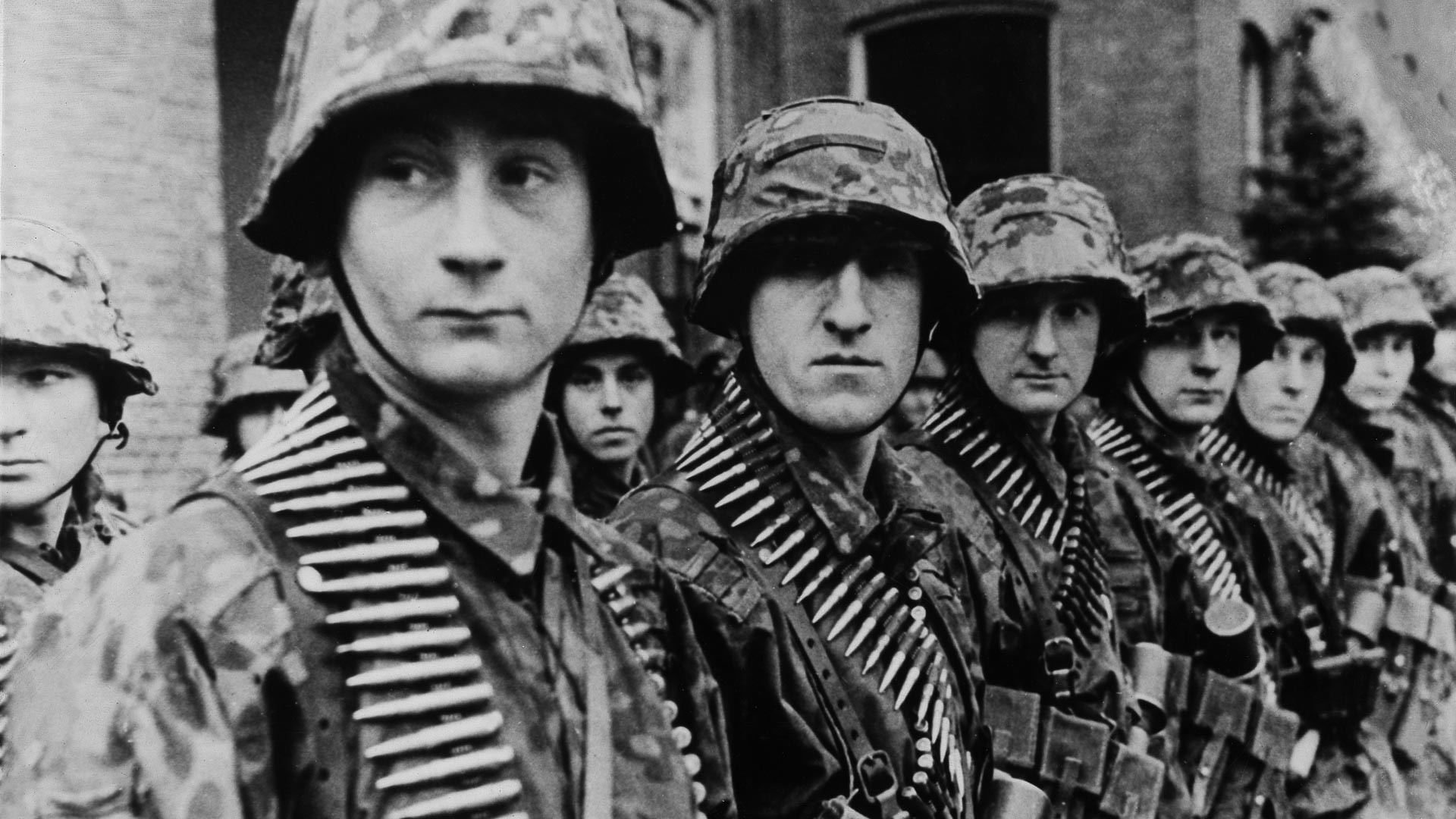 Getty Images
A huge group of German troops held out in western Latvia until the final capitulation of the Third Reich. Soviet soldiers jokingly called it a “camp for armed POWs”.

By noon on April 25, 1945, the Red Army had completed the encirclement of Berlin and begun preparations for a decisive assault on the capital of Nazi Germany. By that time, Soviet forces had already liberated Poland, Romania, Bulgaria, Hungary, a large part of Yugoslavia, eastern Austria and northern Norway from the enemy. It is amazing that, during this time, part of the territory of the USSR itself was still under the control of the Third Reich.

About 400,000 servicemen of Army Group North found themselves cut off in western Latvia (Courland) when, on October 10, 1944, units of the Soviet 51st Army reached the Baltic coast near the town of Memel (Klaipėda). That is how the Courland Pocket, which existed until the ultimate defeat of Nazi Germany, came into being. 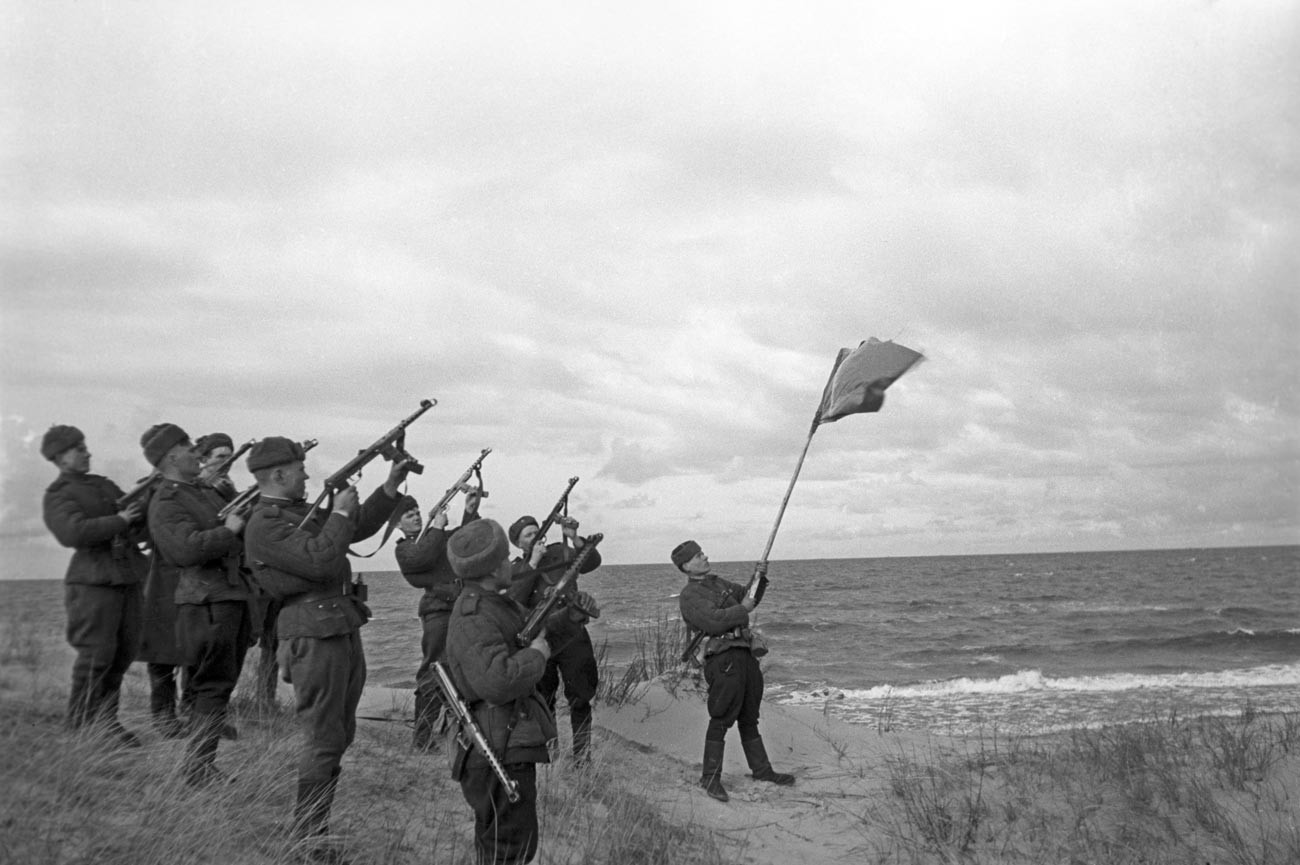 Salute on the occasion of breaking through to the Baltic Sea during the Baltic strategic offensive operation of the Soviet troops in October, 1944.

The plight of the German troops blockaded in the Baltic region was not catastrophic, however. They still had the major ports of Liepāja and Ventspils under their control and the Soviet Baltic Fleet was not in a position at that moment to prevent the Kriegsmarine [German Navy] from effectively supplying the isolated group with provisions, ammunition and reserves.

“Under an order from the commander of Army Group North (Colonel-General Ferdinand Schörner), it was forbidden to use the expression Courland Pocket,” recalled Gottlob Bidermann, a commander of an anti tank crew. “There were even rumors, although, as far as I knew, they were not confirmed, that a soldier could be sentenced to death if he was heard talking about our hopeless situation in that ‘pocket’. After the annihilation of the 6th Army at Stalingrad, the word had acquired the ominous hidden meaning of an imminent and inevitable disaster… The official name for the trapped army was the Courland Bridgehead.”

The first attempts to rout Army Group North were taken straight away, in October, but failed. “The situation there was impossible since the entire Courland region was a continuous swamp,” lamented Peter Küpersepp, a signalman in an artillery regiment of the Estonian 8th Rifle Corps of the Red Army. “In order for our hardware to pass, we had to lay down special tracks right on the swampy ground. Without them, there was no way our hardware could pass. When a mortar-gun got stuck, we had to pull out the 122-mm mortar-shells and then mount the mortar on timber blocks, in order to fire it again.” 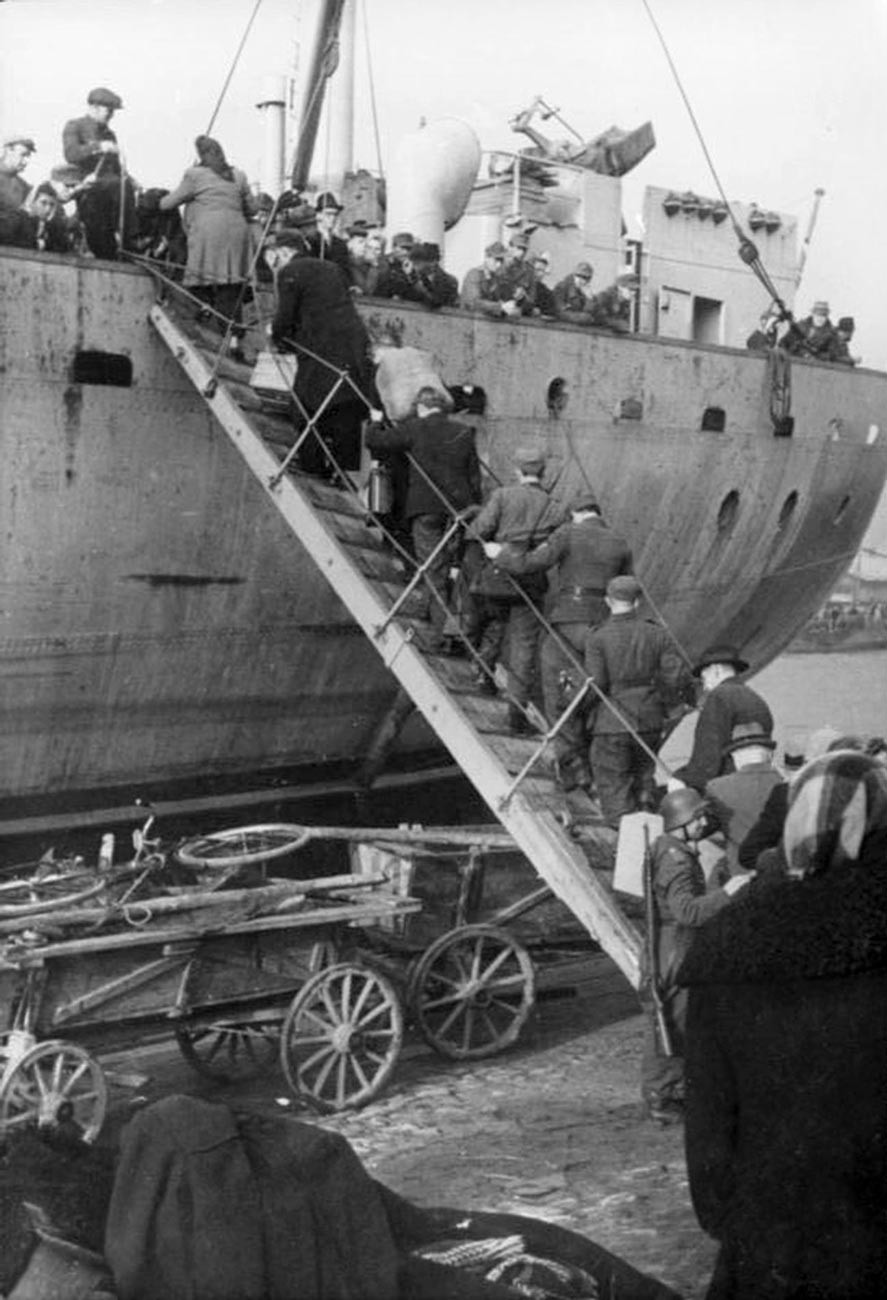 Having repelled the Soviet forces’ offensive, the Germans started to rapidly dig in in western Latvia. On a relatively small front line of 220 km, they created an in-depth defense with barbed-wire entanglements, minefields and anti tank ditches. “The entire Courland Pocket was dug up and covered with lines of trenches. We would overrun one trench, but then would immediately come across another line of trenches and it seemed there was no end to them,” recalled Mikhail Saltykov, the commander of a machine-gun platoon of the Estonian 8th Rifle Corps.

Hitler had no intention of ceding Courland to Stalin. On the contrary, it was intended to be a thorn in the side of the Soviet command and to constantly divert the efforts of Red Army forces. It was planned that, at the appropriate moment, a powerful blow would be delivered from there to the flank of the Soviet troops advancing westwards.

The destruction of the “pocket”

The Red Army, in turn, did not linger in Latvia. Having allocated sufficient forces to maintain the “pocket”, it continued to extend its offensive into the heart of Germany. Soviet soldiers jokingly called the blockaded Army Group North (renamed, on January 25, 1945, Army Group Courland) a “camp for armed POWs”. 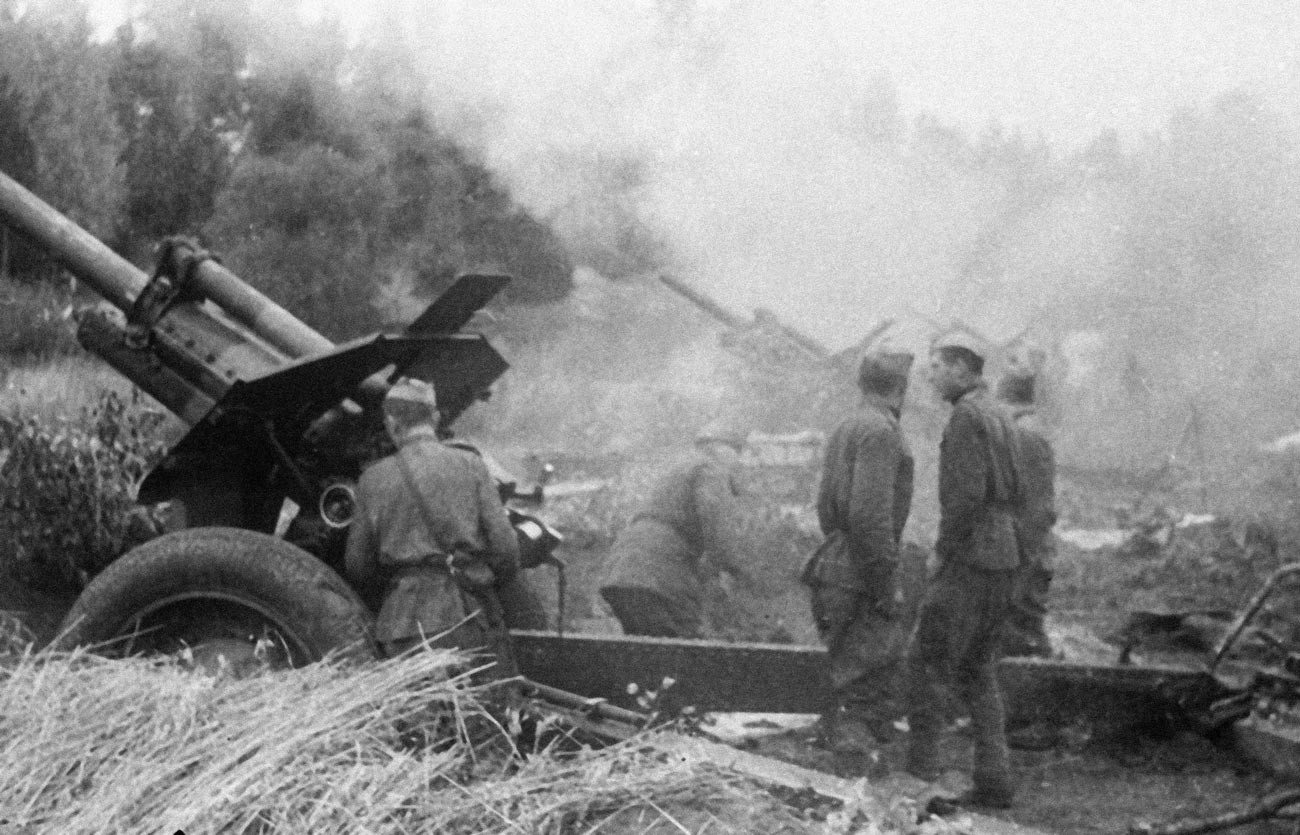 Still, until the end of March 1945, Soviet troops, even with the limited forces at their disposal, made attempts to destroy the “pocket”. Incurring great losses, they only managed to advance a short distance. Individual Soviet divisions did manage to make significant advances but, as a rule, they ended up surrounded and were forced to fight their way back to their own side.

With the Red Army approaching the capital and central regions of the Third Reich, as well as the Soviet Navy stepping up its activity in the Baltic Sea, the Courland Pocket started experiencing serious supply problems. As the lines of communication with the “mainland” got weaker and weaker, the full evacuation of the group to the Third Reich became an impossible task.

“There was a shortage of ammunition. Our artillery batteries were only allowed to use a limited number of rounds per day. Machine guns were only permitted to fire in short bursts. An entire machine-gun belt could only be used up fully when repelling an attack. At times, our newest rifles, recently manufactured and supplied to the troops in the last months of the war, proved useless when there was no more ammo left for them,” Bidermann recalled. 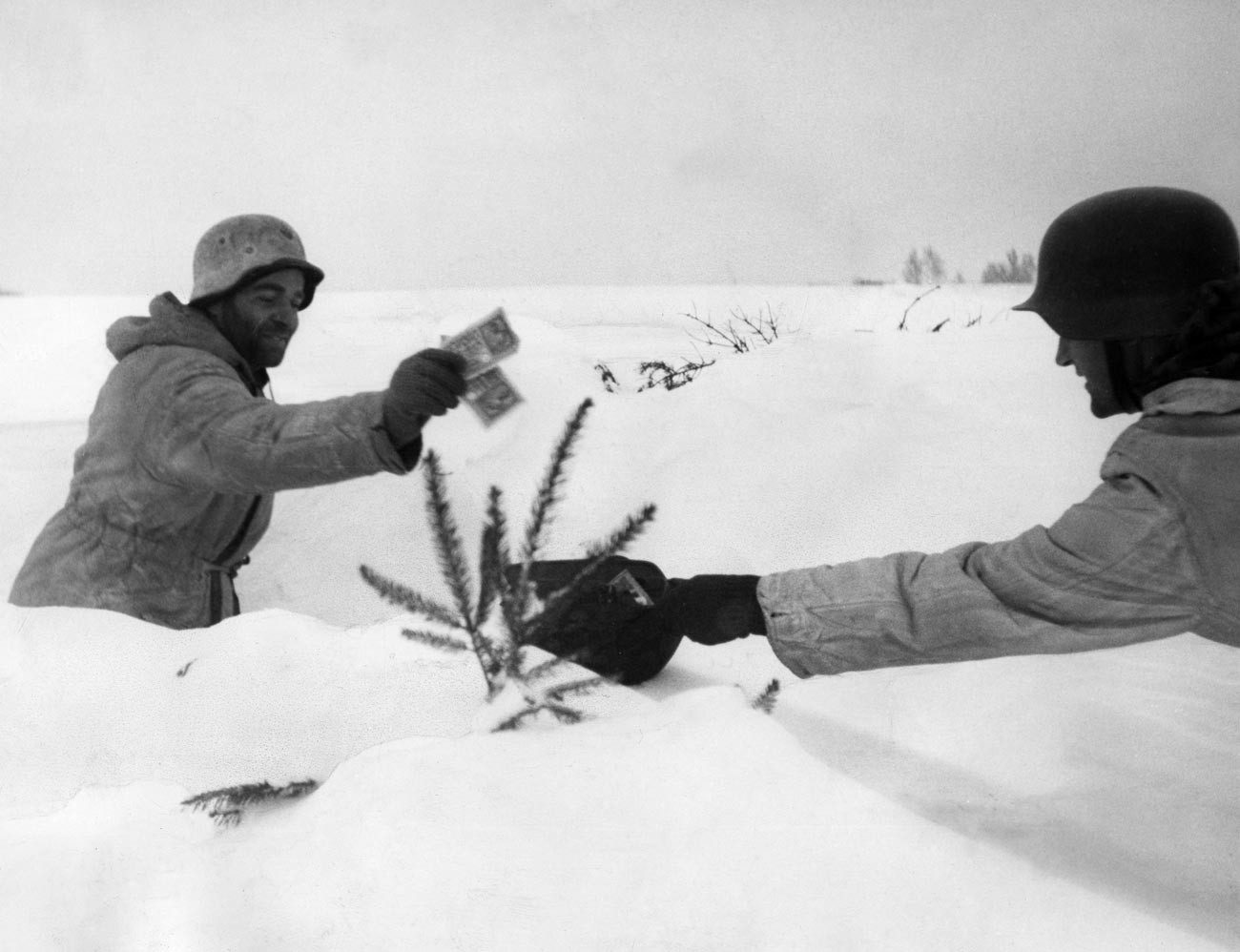 Following the capitulation of Germany, Army Group Courland, led by its last commander, General Carl Hilpert, surrendered. “The Germans were the first to let us know that the war was over,” marine infantryman Pavel Klimov said about the events of May 9, 1945. “We were proceeding along the shore and couldn’t understand the commotion and jubilation along the German trenches. It turned out that they had learned that the war had ended. We learned from the fireworks and the firing in the air that it was over. Only then did we receive an order by radio to abort the operation. There was a lot of joy.”

In total, 42 German generals and 189,000 officers and soldiers ended up in Soviet captivity. Several thousand managed to evacuate to Germany from Liepāja and Ventspils before the ports were occupied by the Red Army, or to flee to Sweden using whatever means of transport they could commandeer.

There were also some who didn’t lay down their arms. On May 22, a detachment of about 300 soldiers of the VI SS Army Corps, making its way to East Prussia, stumbled upon Red Army units and was completely annihilated. The corps commander, Obergruppenführer Walter Krüger, allegedly shot himself right in the midst of the fighting. 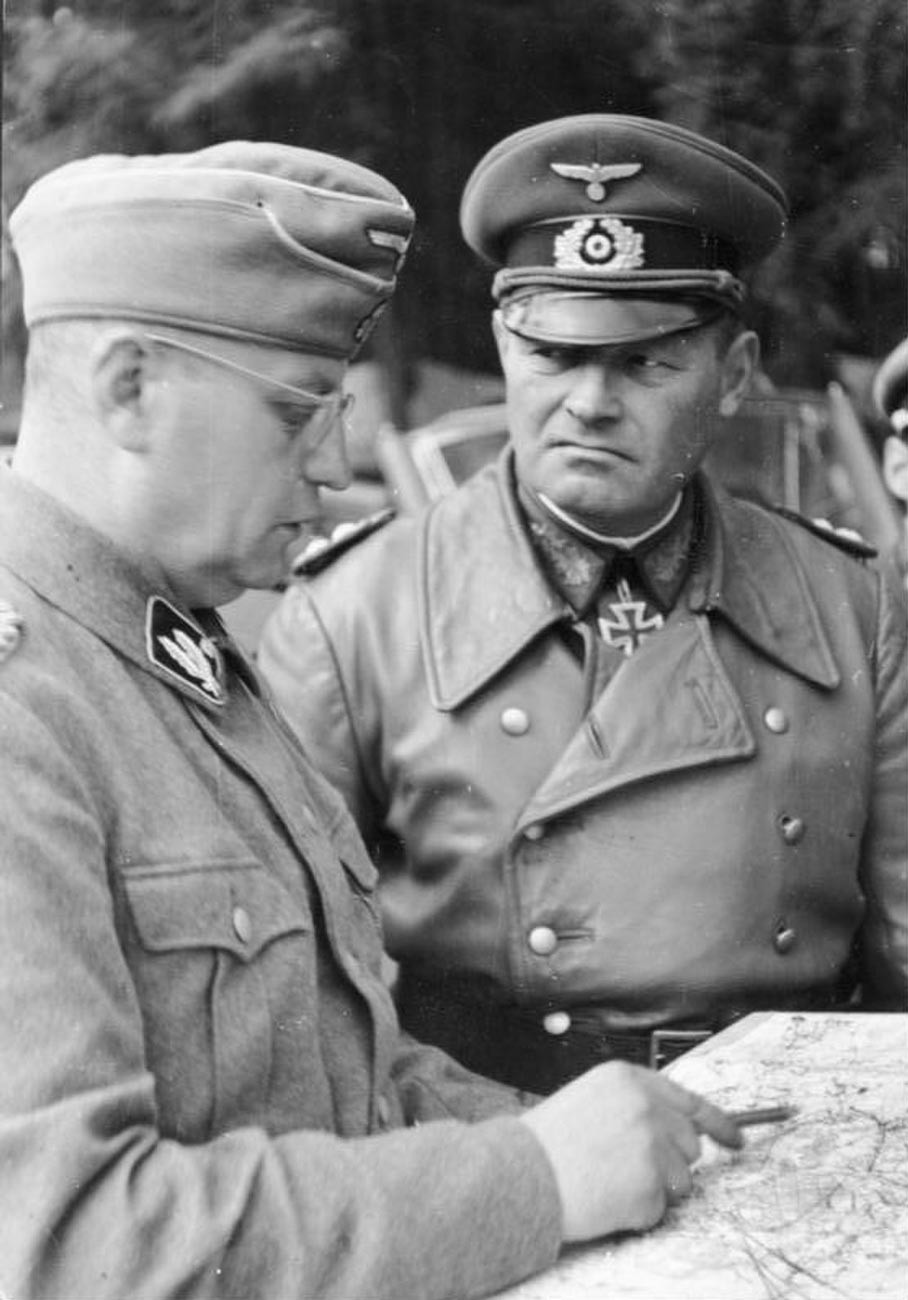 Many of the Latvian collaborators who found themselves in the Courland Pocket - in particular those from the 19th Waffen SS Grenadier Division (2nd Latvian) - went into hiding in the woods to wage a partisan war against the Soviet authorities. Some of these so-called Forest Brothers operated in the Baltic region until the early 1950s.