Who dared to boycott Bolsheviks right after the Revolution? 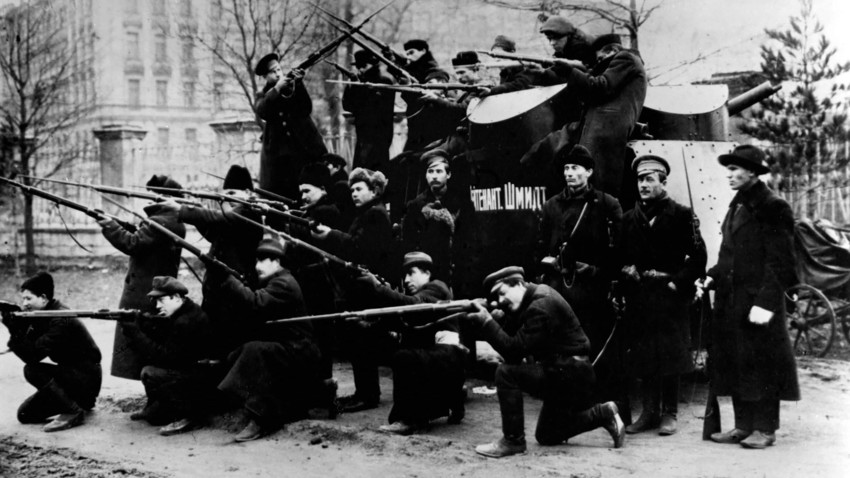 Revolutionary workers stand up against the soldiers of the Provisional Government, Petrograd, 1917

TASS
Immediately after the October Revolution of 1917, many state institutions in Russia were paralyzed, but for a very short time – the Bolsheviks dealt with the problem mercilessly.

Ten days after the Revolution happened in Petrograd (this was the 'revolutionary' name of Saint Petersburg), officials and clerks of the Ministry of Finance of the Russian Empire gathered for a meeting to protest against the Bolsheviks’ seizure of state power.

“We decided to start a general strike and issue a resolution,” Sergey Belgard, a secretary of the Ministry, wrote. The resolution was as follows: “We, employees of the Ministry of Finance, declare: 1) We do not consider it possible to obey orders coming from those who have seized power. 2) We refuse to enter into official relations with them. 3) From now on, until the establishment of the authorities enjoying national recognition, we interrupt our official activities, placing responsibility for the consequences on those who seized power.” 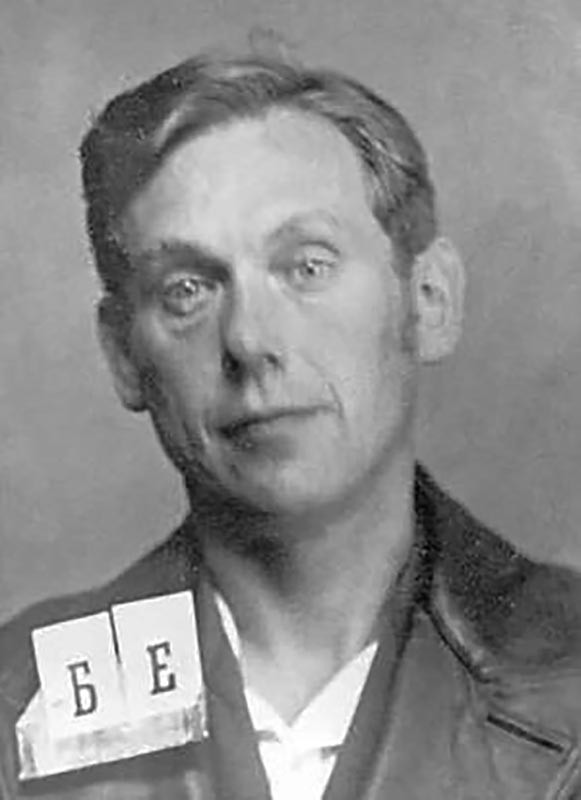 “Protect the national treasure from looting!” 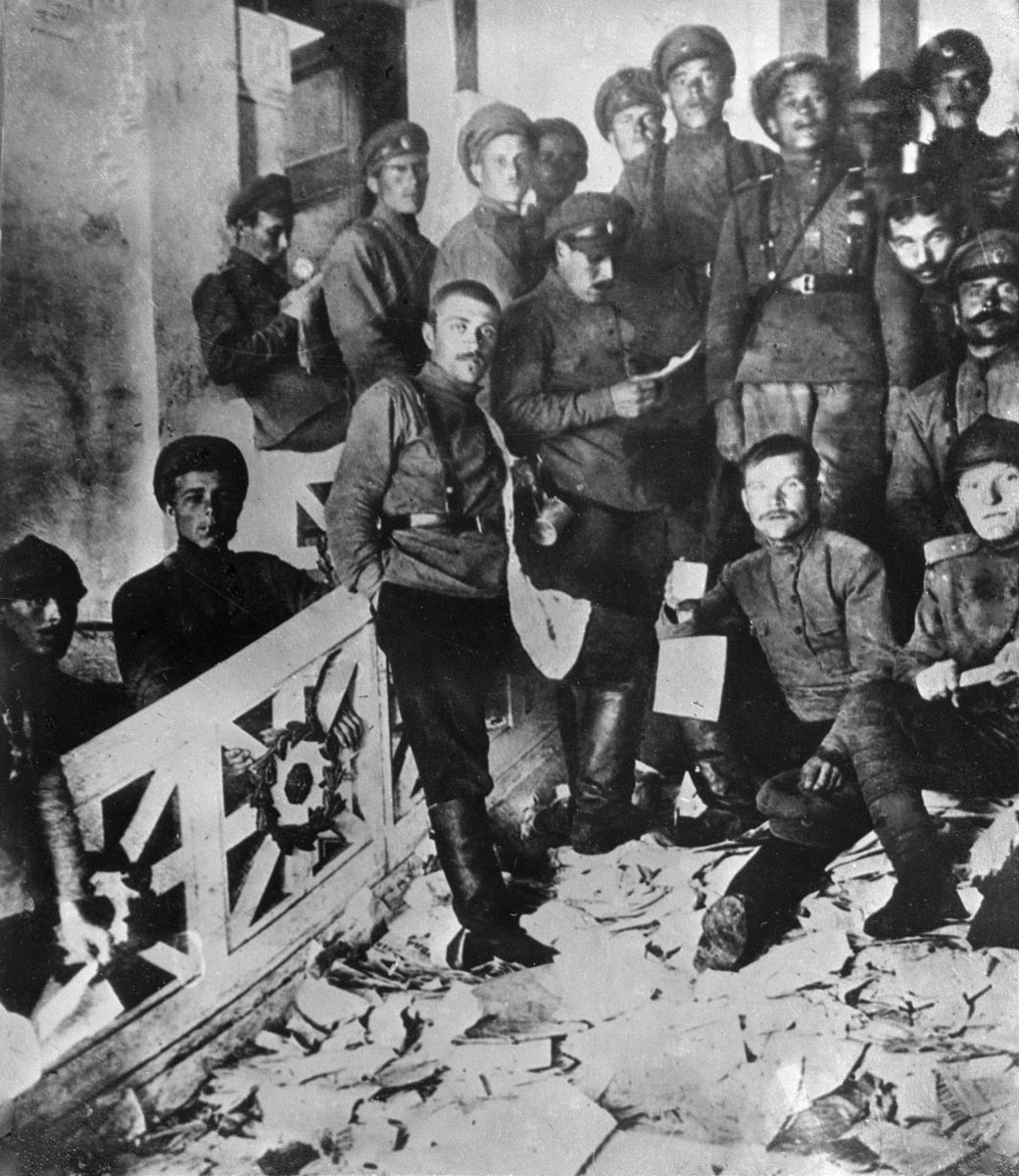 The revolting cadets inside the ravaged premises of the Central Committee in the former Kshesinskaya Palace. June 6, 1917.

The Ministry of Finance was, of course, not the only institution protesting against the Bolshevik power. Two days after their resolution, on October 29, cadets of several military schools in Petrograd mutinied against the Bolsheviks, which was swiftly suppressed, with hundreds killed and executed.

Both the cadets’ mutiny and the statesmen strike were inspired by the Committee for the Salvation of the Homeland and Revolution, a counter revolutionary organization created by members of the Petrograd City Duma on the night of October 26th, while the Bolsheviks were capturing the Winter Palace. The Committee declared the Bolsheviks and their power illegal and dispersed leaflets urging citizens not to recognize the new government. 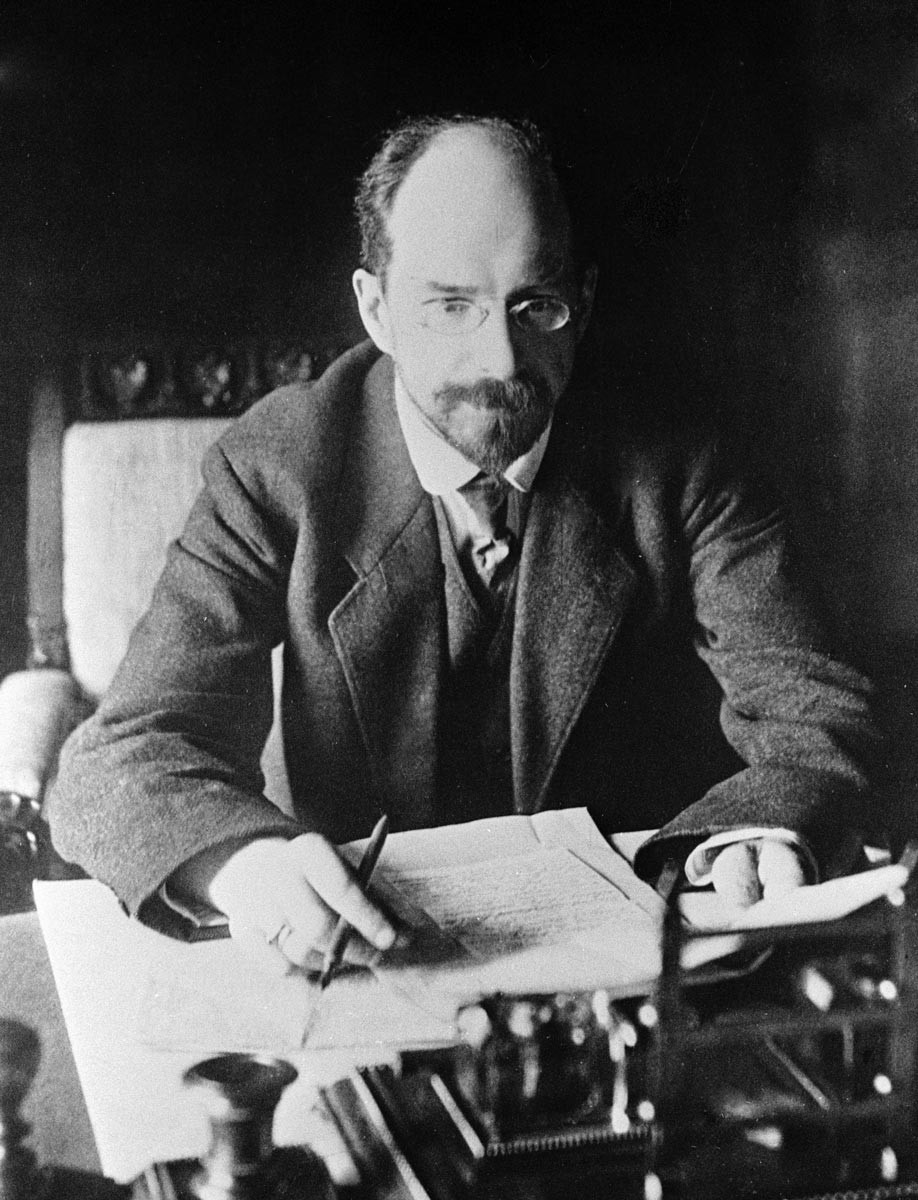 After the cadets’ mutiny failed, the Committee fully dedicated itself to supporting the strike of civil servants. Over 40,000 employees and officials took part in a strike that began in October 1917, including 10,000 bank employees, 6,000 postal workers, 4,700 telegraph workers, and 3,000 clerks of commercial enterprises. Printing workers threatened to stop printing Bolshevik documents, workers of the food industry in Moscow decided to stop shipping food to Petrograd.

“The technical staff is sabotaging us. We won't fix anything ourselves. Hunger will begin,” said Anatoly Lunacharskiy, a famous Bolshevik and Deputy Head of the Petrograd Soviet. Lunacharskiy had strong connections among the old-time intelligentsia and understood that the strike of the Tsarist officials could be fatal. “It is possible, of course, to act by terror — but why? At the moment, we must first of all take possession of the entire [civil] apparatus…” 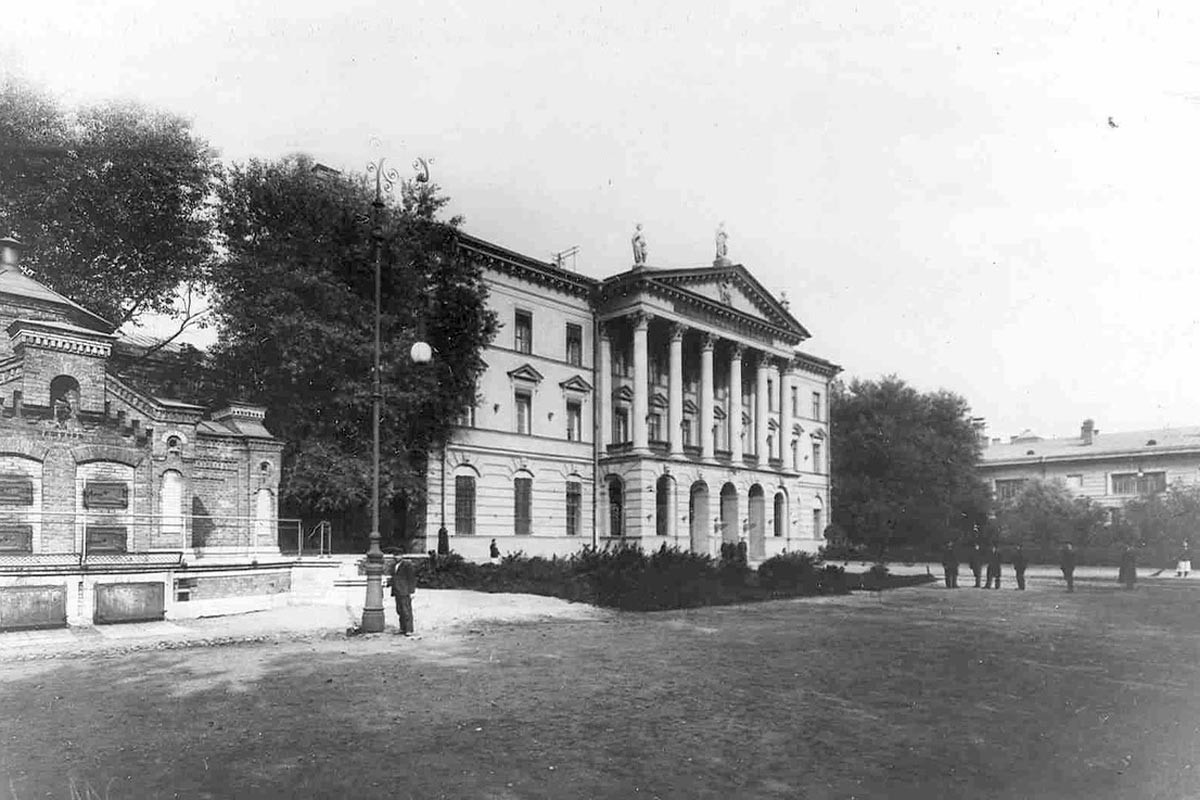 The State Bank of the Russian Empire as seen from Sadovaya street, Saint Petersburg.

Meanwhile, without access to the Treasury and the State Bank, the Bolsheviks were simply broke. Employees of the State Bank published a communique for the citizens:

“Dear citizens! The state bank is closed. Why? Because the violence inflicted by the Bolsheviks on the State Bank did not give the opportunity to continue working. The first steps of the People's commissars were expressed in the demand of 10 million rubles, and on October 28th, they demanded 25 million without specifying what this money would be used for… We, the officials of the State Bank, cannot take part in the plundering of the national heritage. We stopped working.

Citizens, the money of the State Bank is the people's money, extracted by your labor, sweat and blood. Citizens, protect the national treasure from looting, and us from violence, and we will get up to work right now. Employees of the State Bank.” 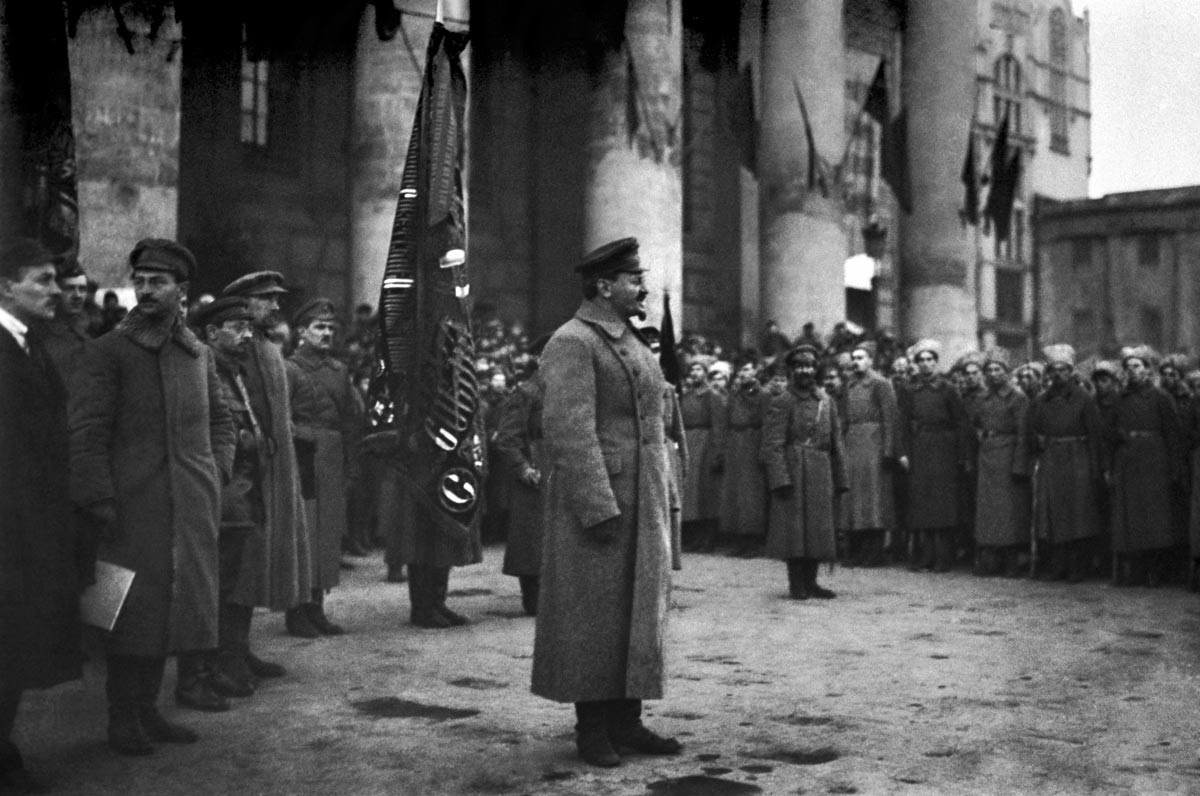 Leon Trotsky delivering a speech to the soldiers of the Red Army, 1918.

But the State Bank was not even the biggest problem. Officials of the Foreign Ministry sabotaged Leon Trotsky himself, probably the second most powerful Bolshevik after Vladimir Lenin at the time. Trotsky, who was the first People’s Commissar of Foreign Affairs in the new government, remembers his first day at the Ministry.

“I was told there was no one here. Some Prince Tatishchev said that there were no employees, they did not show up for work. I demanded to collect those who appeared, and it turned out that a colossal number actually appeared… I explained that the matter [of the new power] was irrevocable, and whoever wants to serve in good faith will remain in service. But it was all to no avail.”

About 600 officials resigned immediately, many went home, but some of them locked themselves in their offices, and Deputy Foreign Minister Anatoliy Neratov tried to flee with the originals of the secret treaties of the Imperial government. In the Ministry of Labor, new People’s Commissar Alexander Shlyapnikov couldn’t even make the clerks fire up the furnaces. Meanwhile at the Ministry of Finance, international financial documents were burned – it made ascertaining Russia's financial relations with other states impossible. 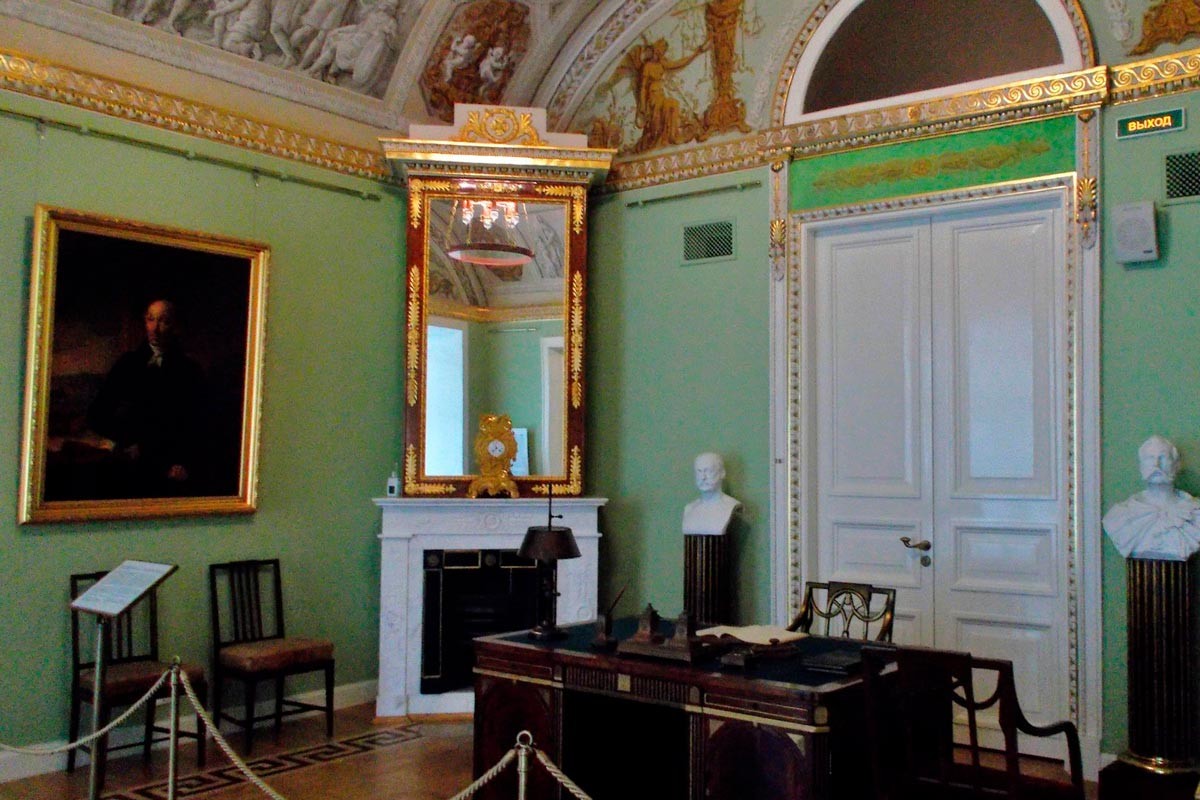 The office of the Minister of Finance of the Russian Empire.

The Bolsheviks deployed urgent measures against the strike. On November 1, 1917, the Petrograd Revolutionary Committee stopped paying those Tsarist officials who joined the strike, and on November 26th, declared the counter-revolutionaries and sabotagers “enemies of the state.”

Vyacheslav Menzhinsky issued an order that he personally declared to the officials of the Ministry of Finances: “All employees who do not recognize the authorities of the Soviet of the People’s Commissars are considered dismissed from service without retaining the right to a pension. Employees and officials who want to continue their work and fully submit to the revolutionary power of the SPC, should start on Monday. Dismissed officials using state-owned apartments must clear them within three days.” 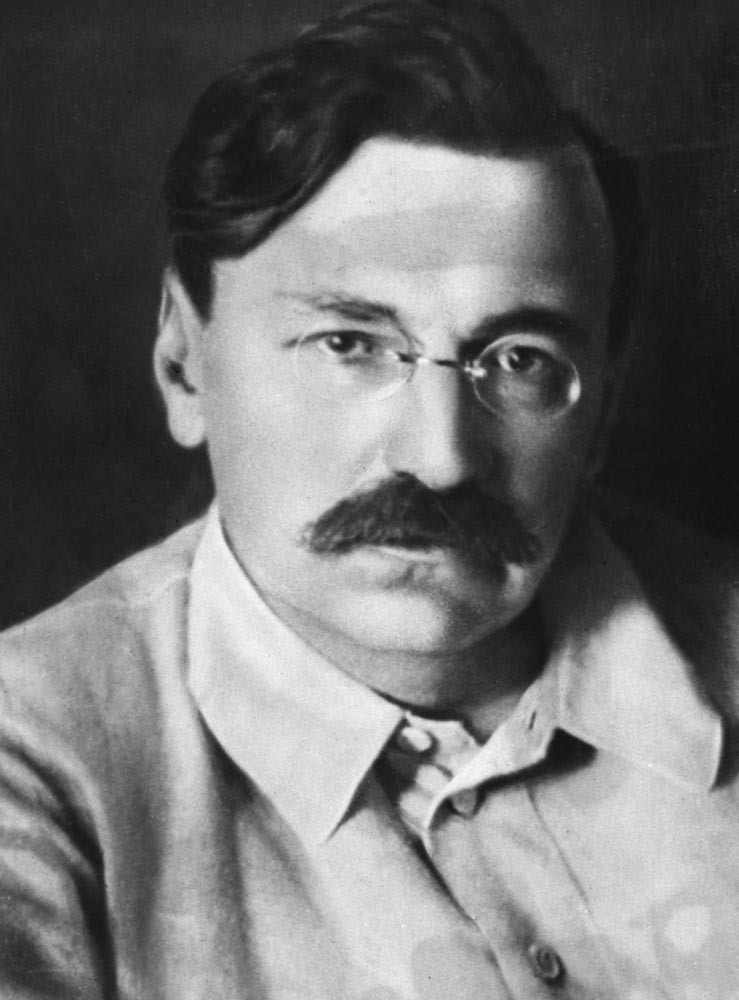 On November 17th, Menzhinsky forcibly entered the offices of the State Bank, safes and offices were broken into and the money seized. It was the start of the Red Terror – on December 7th, the All-Russian Extraordinary Commission (CheKa) under Felix Dzerzhinsky was organized to fight the sabotage, and Lenin gave the organ “emergency powers” – effectively, the right to execute people.

Almost immediately, the CheKa discovered that the "Union of employees of state Institutions," an organization of former Tsarist officials, was collecting money to financially support striking employees. To do this, former ministers of the Provisional Government seized 40 million rubles from the State Bank – not really much, the country’s budget was estimated at more than 2 billion, and a decent salary was about 400-500 rubles at the time. Money was also collected by subscription among the middle classes. From this money, the striking officials were paid a salary for 1-2 months in advance. On December 18th, a telegram was intercepted from former ministers of the Provisional Government calling on all officials to commit acts of sabotage across Russia. 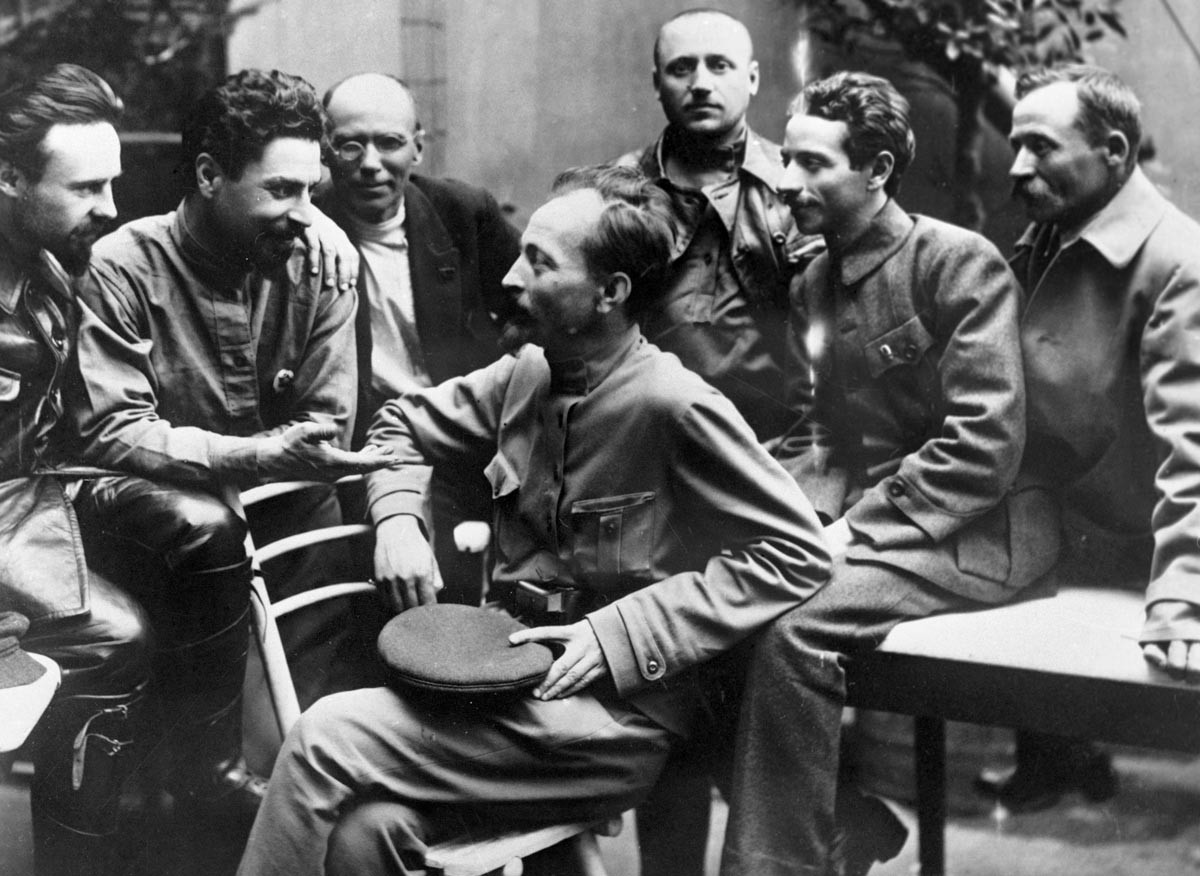 Felix Dzerzhinsky and the staff of the CheKa, 1919

All of this couldn’t end well. On December 17th, Leon Trotsky declared: “Within a month, terror will take very strong forms, following the example of the great French revolutionaries. Our enemies will be waiting for the guillotine, not just prison.” In 1918, the Red Terror went into full effect. Those officials who refused to sign written obligations for non-cooperation with counter-revolutionary bodies were subjected to repression. On September 3rd, 1918, 512 former officials, ministers, professors etc. were shot by firing squad. By that time, the officials’ strike was already long over.

READ MORE: How Jewish authors described their life in Russia

Obviously, a great lot of vacant positions appeared in the state apparatus, which were filled in considerable part by educated Jewish officials, who had not previously had the opportunity to serve in state institutions because Tsarist laws restricted their rights. Most of the Jewish population in Russia by that time was largely anti-Tsarist because of this. The Bolsheviks, on the contrary, supported Russian Jews – on July 25, 1918, a decree “On the fight against anti-Semitism and Jewish pogroms” was issued by the Soviet of People’s Commissars, and Jews were invited to serve the new state and the Red Army. 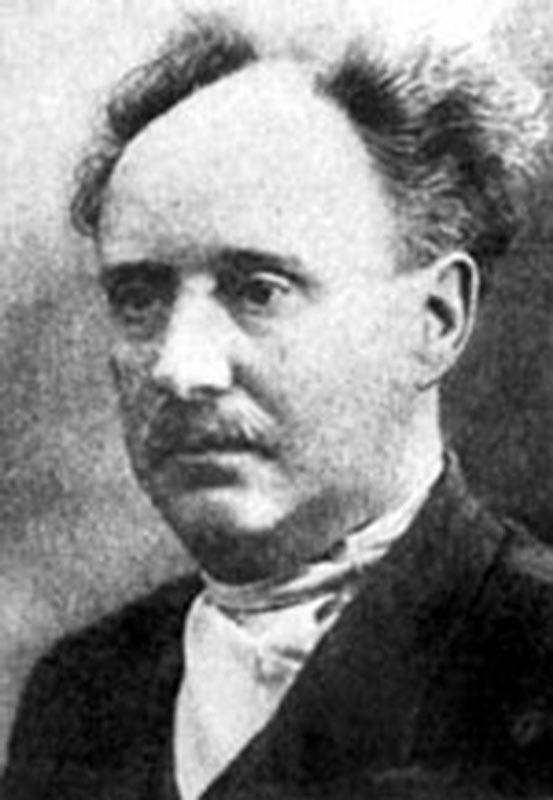 Semen Dimanstein, the person responsible for Bolshevik connections among the Jewish community in Russia.

Semen Dimanstein, a Soviet official responsible for Jewish communities in the People's Commissariat for Nationalities, wrote: “The fact that a significant number of Jewish intellectuals ended up in Russian cities because of the war served the revolution greatly. They thwarted the general sabotage that we met immediately after the Revolution.” As Dimanstein also wrote, Lenin himself stressed the fact that the Bolsheviks ”managed to conquer the state apparatus and significantly modify it only thanks to this reserve of competent and more or less intelligent, sober new officials.”