Who designed the roof of GUM, Moscow's iconic shopping mall? 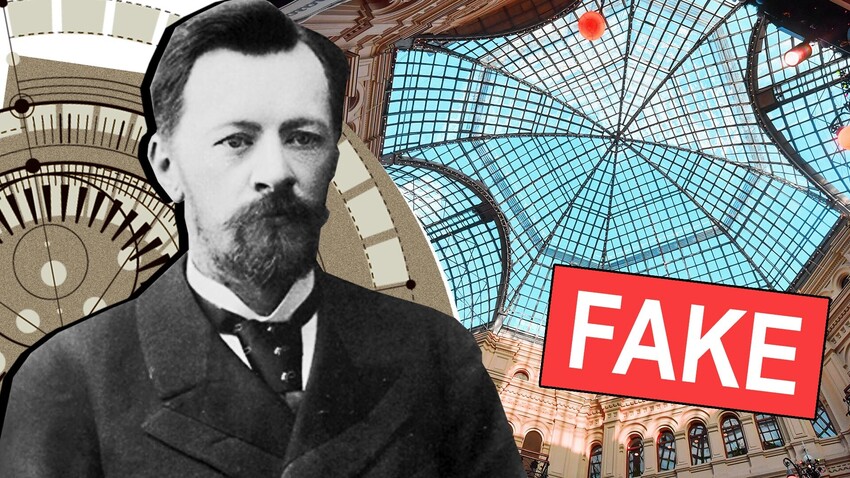 Kira Lisitskaya (Photo: Public domain; Komsomolskaya Pravda/Global Look Press)
The ceiling overlays of the GUM, the shopping mall located on Moscow's Red Square, are reminiscent of the signature style of Vladimir Shukhov. However, the great Russian engineer had no hand in their design. Why do so many people believe otherwise?

Whenever you throw a glance at the transparent roof of Moscow’s oldest and most popular shopping mall, there’s little doubt left in your mind: it was created by a genius. It’s also quite similar to the hyperboloid tower constructed by Vladimir Shukhov in Moscow’s Shabolovka district. However, you’d be wrong in thinking that the same mind was behind the design of the GUM’s iconic roof. And you wouldn’t be the first to make the mistaken connection – the matter certainly wasn’t helped by numerous articles in both mainstream and specialized publications, confirming this erroneous fact. 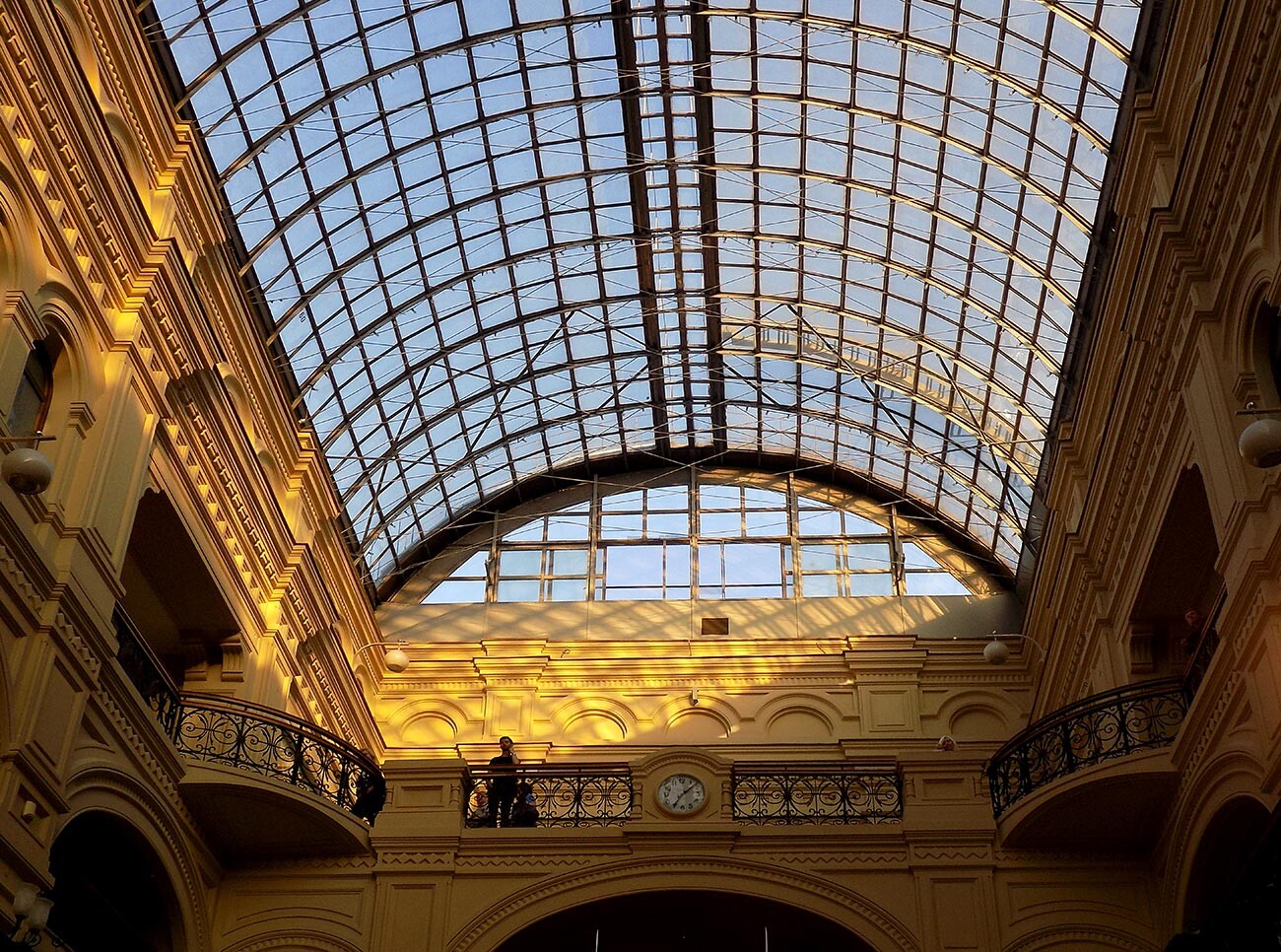 The legend about Vladimir Shukhov participating in the creation of the iconic roof overlays of the Upper Trading Rows, which would later become the State Department Store (Gosudarstvenny Universalny Magazin; GUM) was spread and developed first by his student and colleague Grigoriy Kovelman, then the engineer’s great-granddaughter, Elena Shukhova. 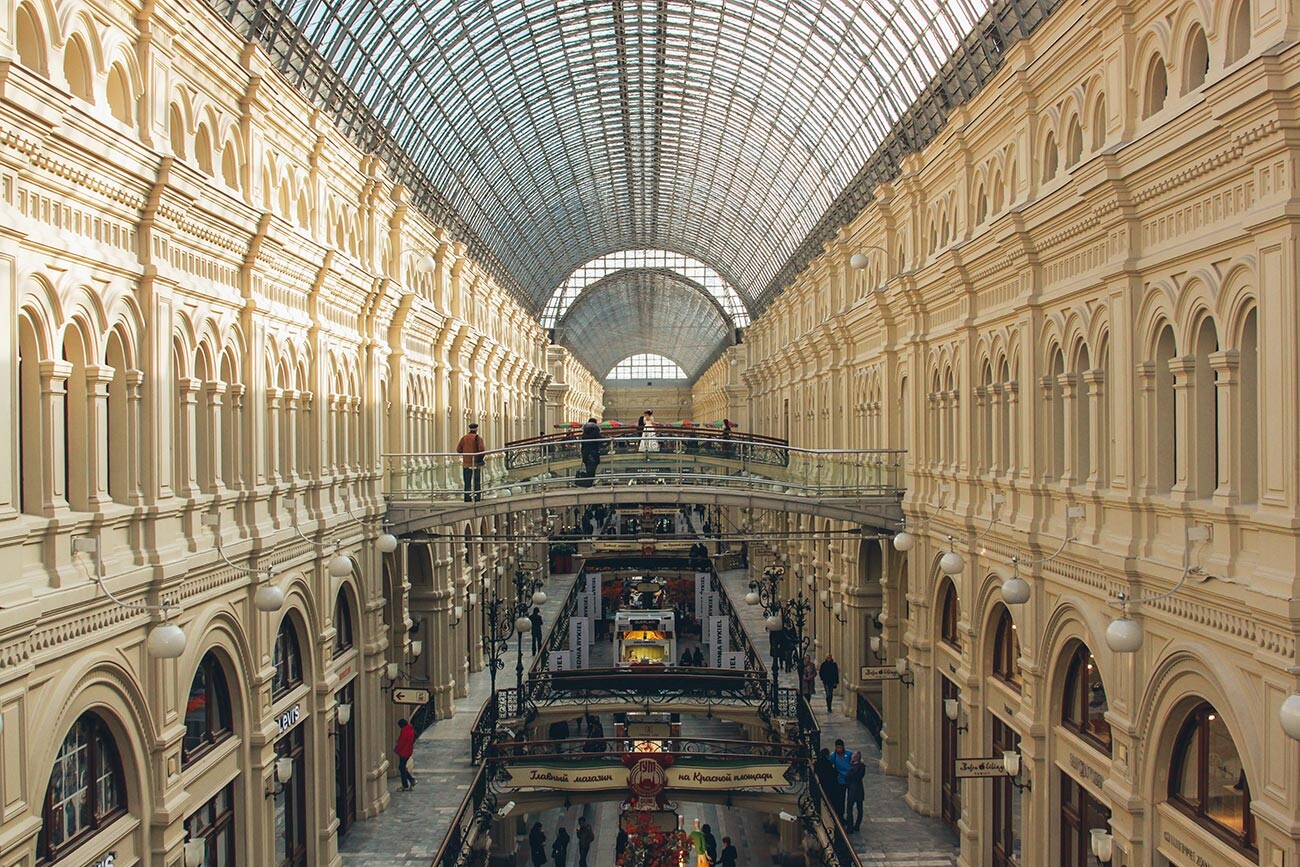 According to art and architecture historian Ilya Pechenkin, the first “official” mention of the overlays being the work of Shukhov is found in Shukhova’s book – ‘Vladimir Grigoryevich Shukhov. Russia’s First Engineer’. The book mentions a brochure of his – ‘Framework: The Surveying of Rational Types of Rectilinear Framework Girders and the Theory of Arch Girders’ (1897), which, according to the researcher, contains the calculations that laid the groundwork for the creation of GUM’s overlays.

Sure enough, information published not only by a researcher, but by the engineer’s direct descendant, was taken by the scientific community to be valid by default. However, some inaccuracies managed to sneak their way into Shukhova’s research. 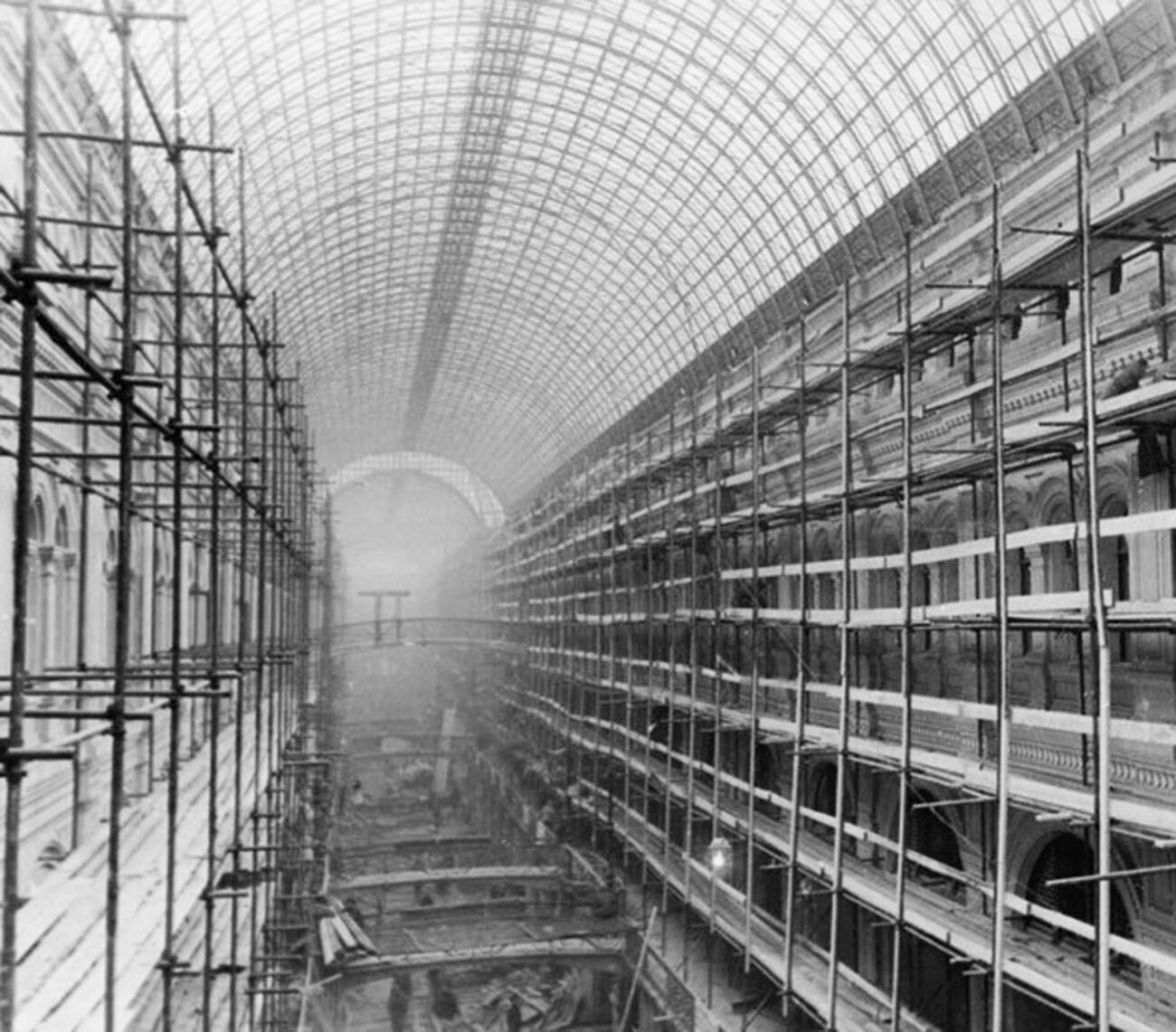 The Upper Trading Rows in construction.

The issue of designing a transparent roof for the Upper Trading Rows was first raised in 1890, according to Pechenkin. It was then that architect Aleksandr Pomerantsev, the man behind the actual building’s construction, introduced his roof overlay idea to members of the trader’s guild and the Management Board. The overlays were to be constructed according to the ‘Polonso system’ i.e. have a gable roof.

The Management Board of the Upper Trading Rows issued a separate tender for the roof’s construction, distributing Pomerantsev’s blueprints to all the major construction firms of the time. Of the six that answered the call, the project authored by the St. Petersburg Metalworks was selected. According to the architect himself, their idea for the overlays, “for all their lightness, managed to retain rather important attributes with respect to solarization”. However, the project was based not on the Polonso-style overlays, but other, arch-oriented ones. Such a roof was nothing new, in fact: it had already been seen in the spa greenhouse of the Tauride Palace, created in 1888-1889, and later moved to St. Petersburg’s Botanical Garden. One can easily spot the arch-style overlays there that we see at the Moscow GUM today.

The city’s metalworks received an order for manufacturing the overlays and, judging by the receipts seen by Pechenkin, successfully completed the task by 1893.

But where did the legend originate from? 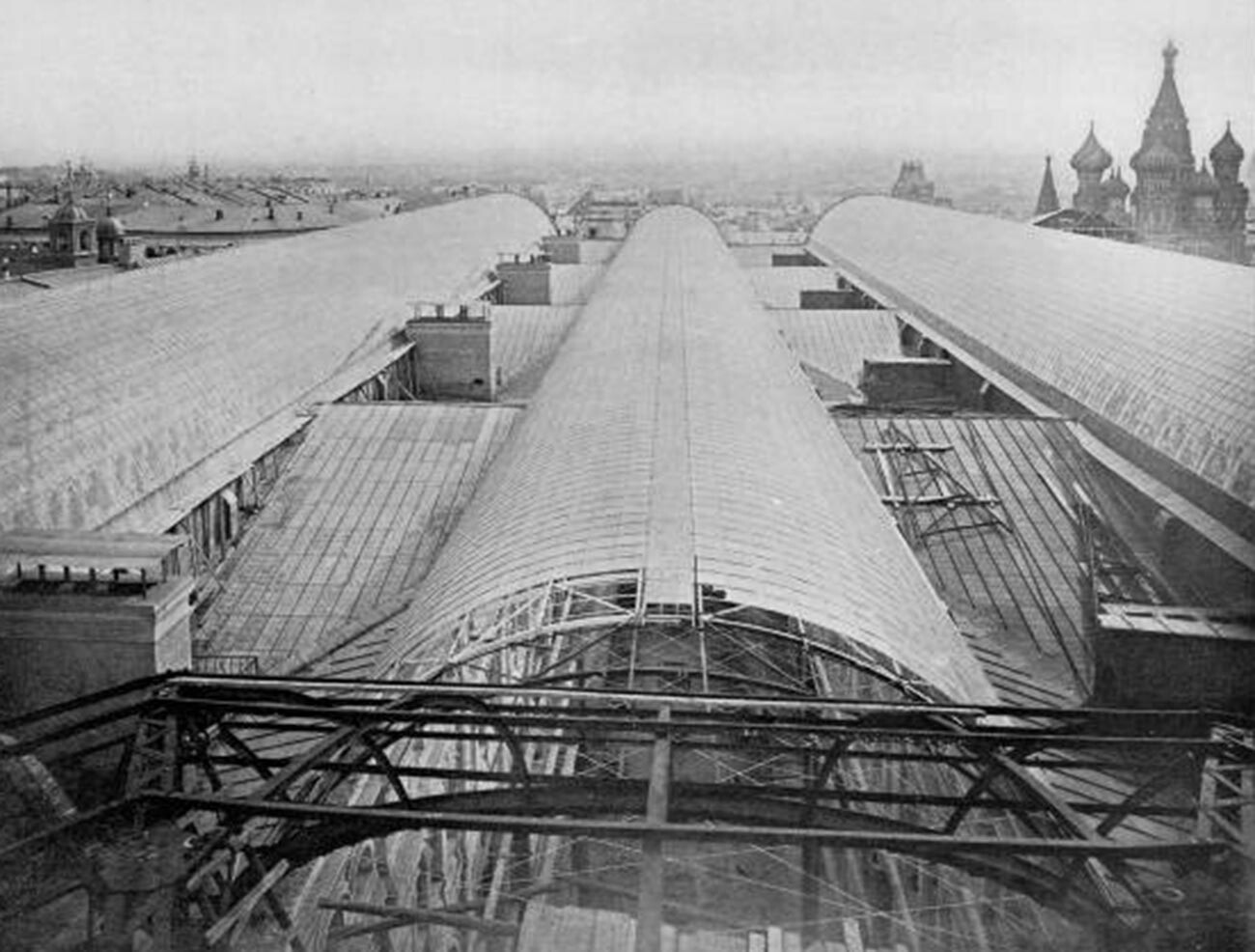 The roof of the Upper Trading Rows in construction.

From the foreword to Shukhov’s brochure on frameworks – penned by another great engineer of the day, Petr Khudyakov, we find out that “the suspended matrix of Shukhov’s system… was first designed and widely implemented in a number of exhibition buildings by a firm belonging to the engineer Bari”.

Meanwhile, the archived “list of metal girders and buildings, constructed in 1885-1920 from V.G. Shukhov’s designs by A.V. Bari”, contains no mention of the GUM’s pavilions’ frameworks.

So, where did the legend come from then? Pechenkin believes the source to be Gregory Kovelman’s book – ‘The Works of the Honorary Engineer and Academian Vladimir Grigoryevich Shukhov’. Kovleman was a student of Shukhov’s.

“This system is referred to as Shukhov’s, regardless of the credit awarded for it to the Society of St. Petersburg Metalworks Factory, as V.G. Shukhov was the first to offer a detailed analysis of the overlays with criss-cross tokes and the first to initiate their widespread use,” Kovelman writes, adding: “The constructions and blueprints for the roof were designed by the Petersburg metalworks in consultation with the system’s creator, as well as A.F. Loleyt, as far as we know.” 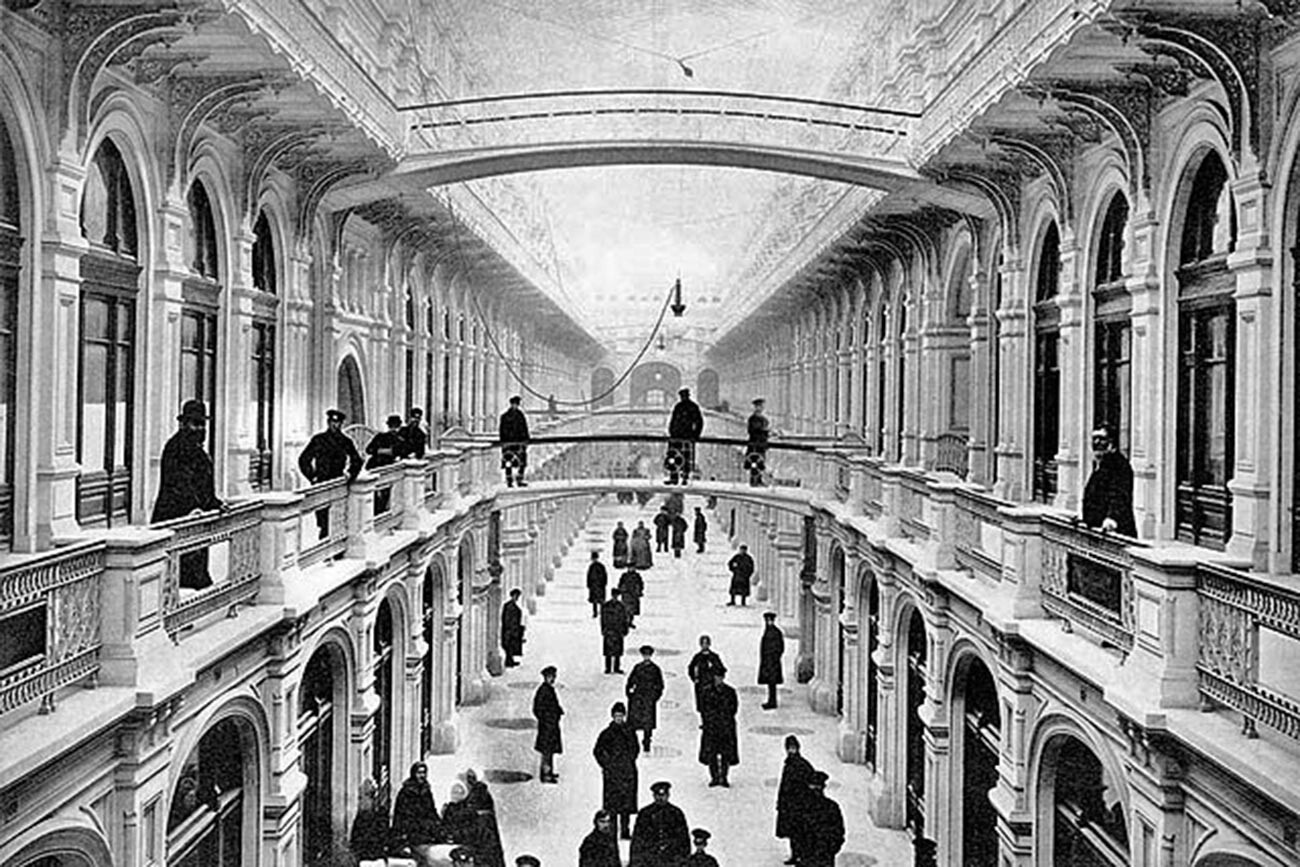 The balconies in the Upper Trading Rows, designed by Artur Loleyt.

However, architect Arthur Loleyt participated in the design of the Upper Trading Rows in an entirely different capacity – as an expert in the use of reinforced concrete; the Trading Rows required the construction of bridges, connecting the upper galleries. Loleyt had absolutely no connection to the design of the GUM’s overlay-reinforced transparent dome. And the fact that Kovelman refers to him as “co-author” shows, according to Pechenkin, “a lack of thorough understanding by Kovelman of the process of construction of the Upper Trading Rows, which he took no part in”. In other words, Kovelman just didn’t have his facts straight and simply wished to once again emphasize the importance of Shukhov’s professional contribution.