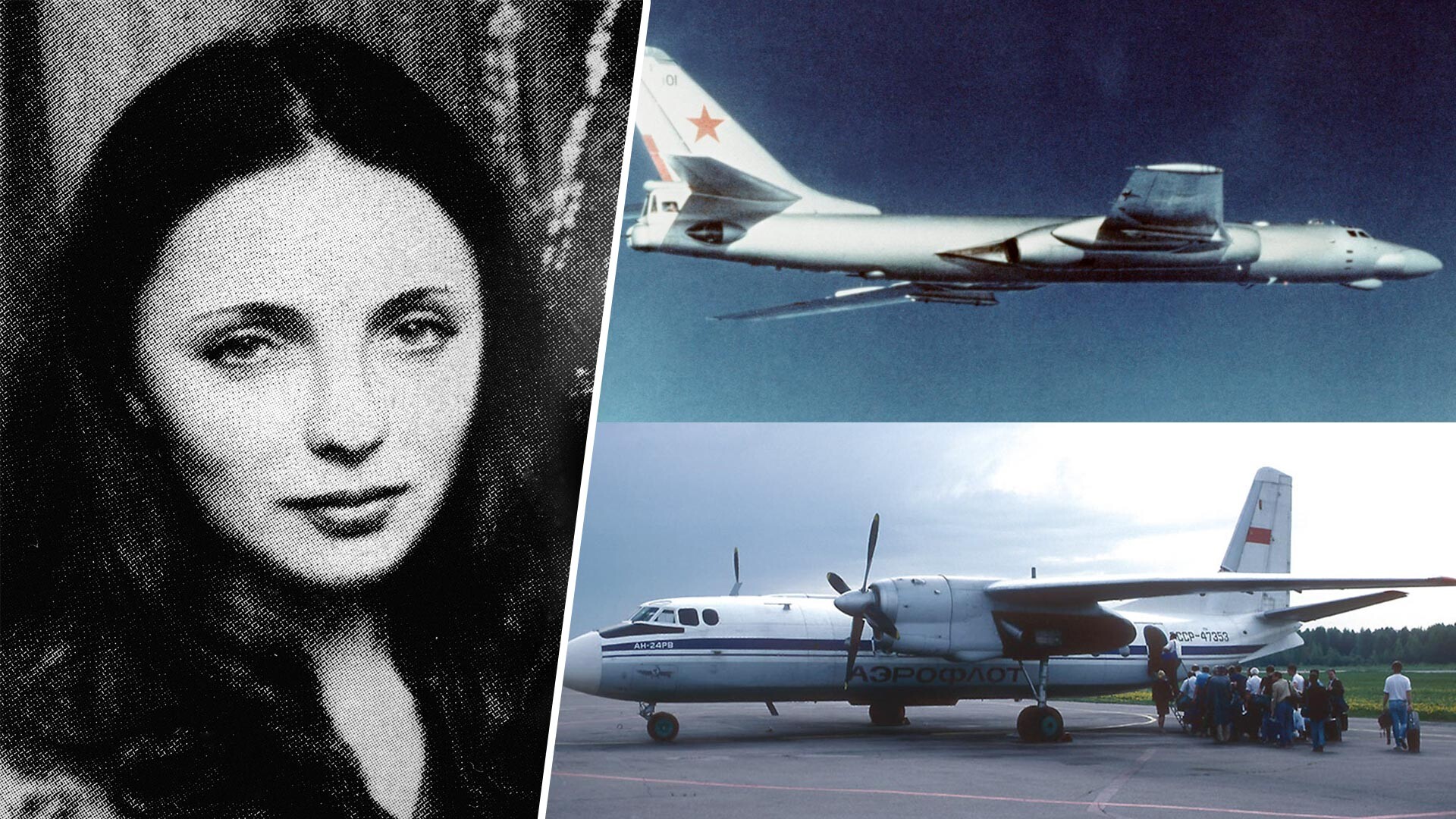 Sputnik; Alain Durand; Public domain
Forty years ago, a military and a civil plane collided mid-air, with a 20-year-old girl surviving the crash, landing and waiting for rescuers deep in the Russian taiga. 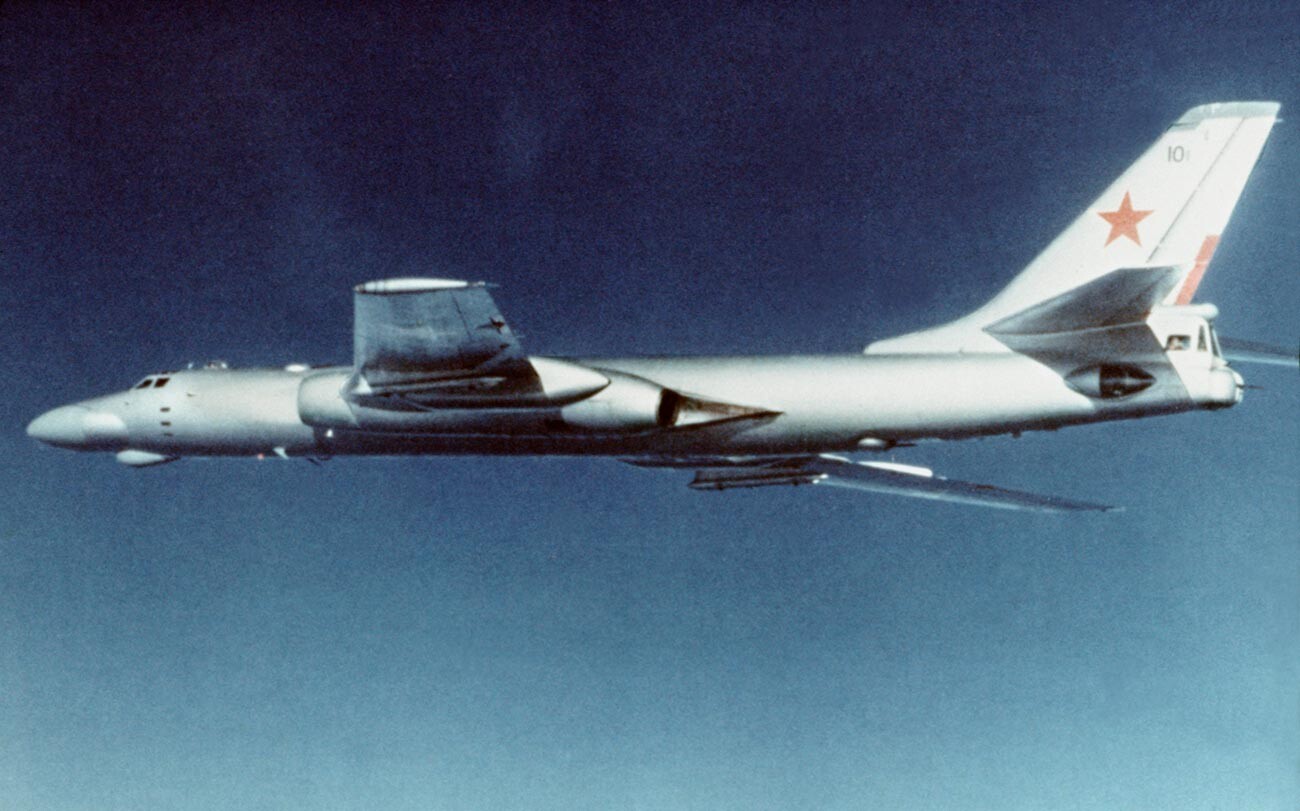 The collision was a result of several unlucky factors. Each of them was totally unimportant on its own, but their sum turned out to be fatal. The Tu-16K was one of a number of military aircrafts that had to fly through this territory that day. Its pilots were badly informed about other planes they had to beware of in the sky. That’s why they told the air traffic controllers that they had already gained the next flight altitude, but, in fact, were planning on doing it a bit later. Commanders of military flights didn’t use radio detectors at the time - otherwise they would have located the An-24RV. Also, the civic and military forces had no accordance in their actions.

At 3:21 p.m., the planes collided at an altitude of 5,200 meters. The An-24 lost its upper part and wings, cutting the body of Tu-16K near the flight deck with its propeller. The aircrafts fell apart and crashed down into the taiga. Thirty seven people died: the six people of the military crew, five members of the An-24RV crew and 26 passengers (including a child). But, the total number of people on the planes was 38: Larisa Savitskaya, a 20-year-old teaching student had miraculously managed to survive the accident. 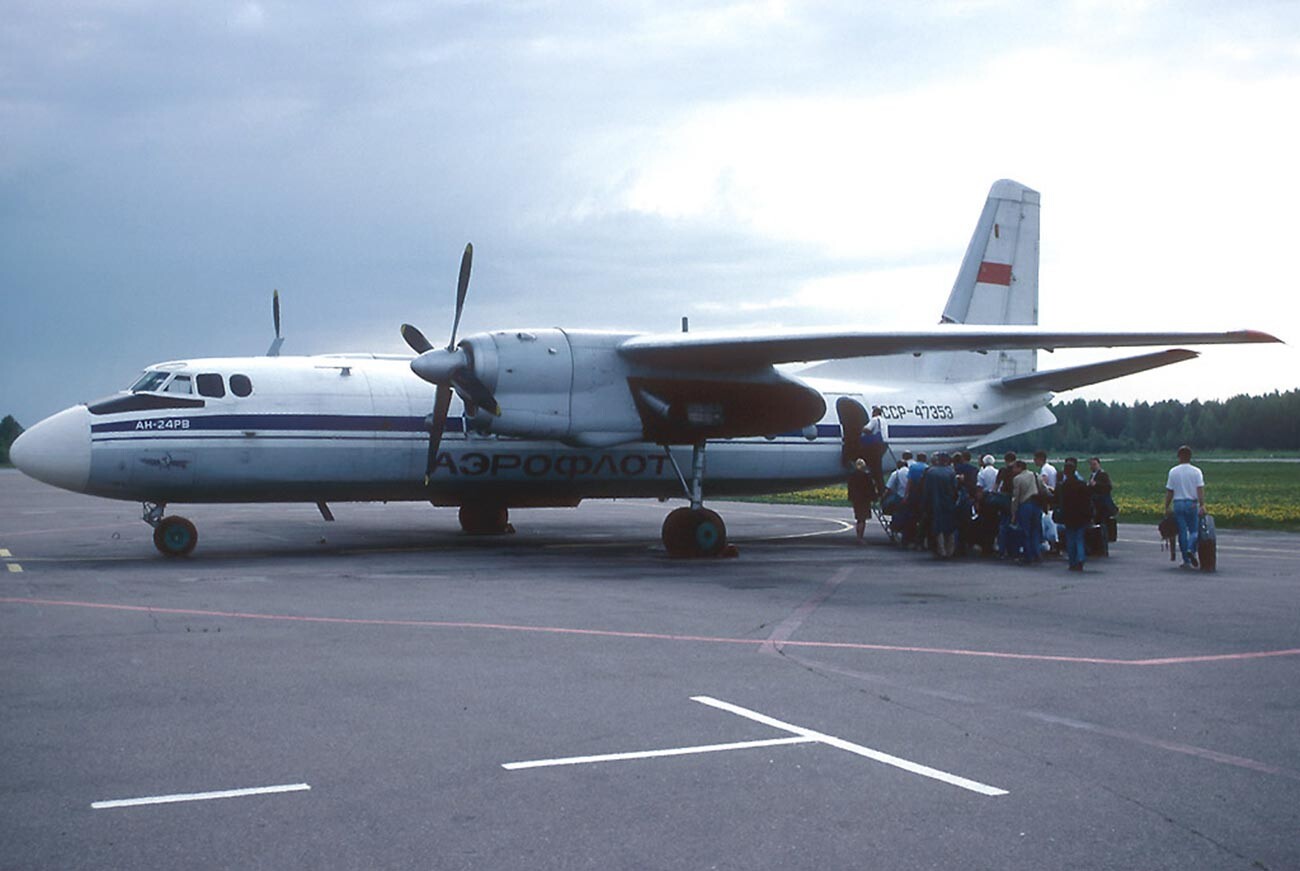 Larisa Savitskaya was returning from a wedding tour with her husband Vladimir. They were visiting his relatives in Komsomolsk-on-Amur. Blagoveshchensk, meanwhile, was the city where the student couple lived and studied. Larisa remembered all the passengers and the moment they entered the plane well, but she later recalled: “I had such a fatigue, I even don’t remember how we took off.” The plane was half-empty and the stewardess offered the couple seats in the front, but they decided to go to the back of the plane to feel less turbulence. This was one of the decisions that saved Larisa’s life: “When the plane split, the seats we sat in first broke off and flew away with another plane piece, nobody would have survived there.”

She woke up from a heavy bump. The 25°C temperature in the cabin had suddenly changed to -30°C, when the top of the plane was torn off. Larisa felt it like a burn. She heard cries and air whistling around her. Vladimir died instantly at the moment of impact and it seemed to Larisa her life was also over, as she even couldn’t scream from grief or pain. 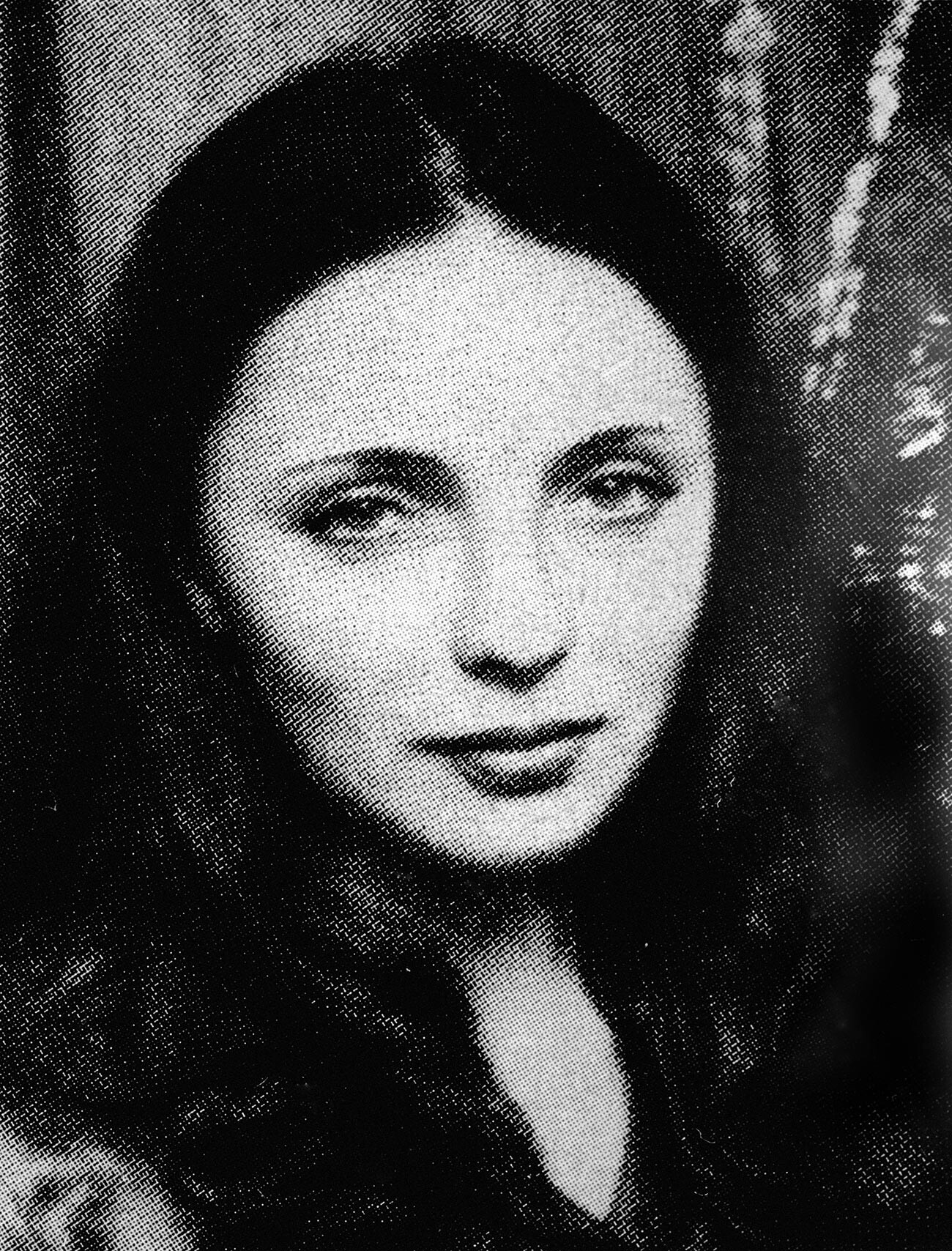 At some point, she was knocked out into the aisle. There, she suddenly remembered an Italian movie ‘Miracles Still Happen’ - she had watched it in a cinema with Vladimir about a year before. It tells the story of Julianne Koepcke, who survived a plane crash in the Peruvian forest. Larisa recalled: “Just one thought - how to die without torture. I caught hold of the arm pads and tried to push my arms and legs back from the floor and the seat with all my strength.” Julianne had done the same in the movie. Luckily, the piece of An-24RV tail with Larisa’s chair was gliding slowly and without abrupt turns. She recalled she couldn’t see what was going on: “Clouds flew along in the viewport, then the solid fog covered them and the howl of the wind was deafening. The plane didn’t set on fire. Suddenly, there was a ‘green’ explosion in the viewport. The taiga! I tensed up and put myself together.” Then, Larisa was lucky again - after eight minutes of free fall, her plane fragment landed on a stand of flexible birch trees that made the landing much softer than just falling on the ground or in fir trees.

A computer reconstruction of the planes collision.

The first thing Larisa heard when she came to herself was the booming of forest mosquitos around her. The shock didn’t let her understand which injuries she actually had. She felt multiple spinal injuries (happily, she could still move), broken ribs, arm and leg, brain concussion and knocked out teeth, as well as some dull, overall pain in her whole body. Larisa suffered from different hallucinations: “I opened my eyes: the sky above my head, I’m in the armchair and Volodya is in front of me. He’s sitting on the floor of the undestroyed right compartment, drawing his back against the wall. It seems he is looking at me. But his eyes are closed. As if he is saying goodbye. I think if he had a dying wish, he only wanted me to survive.” 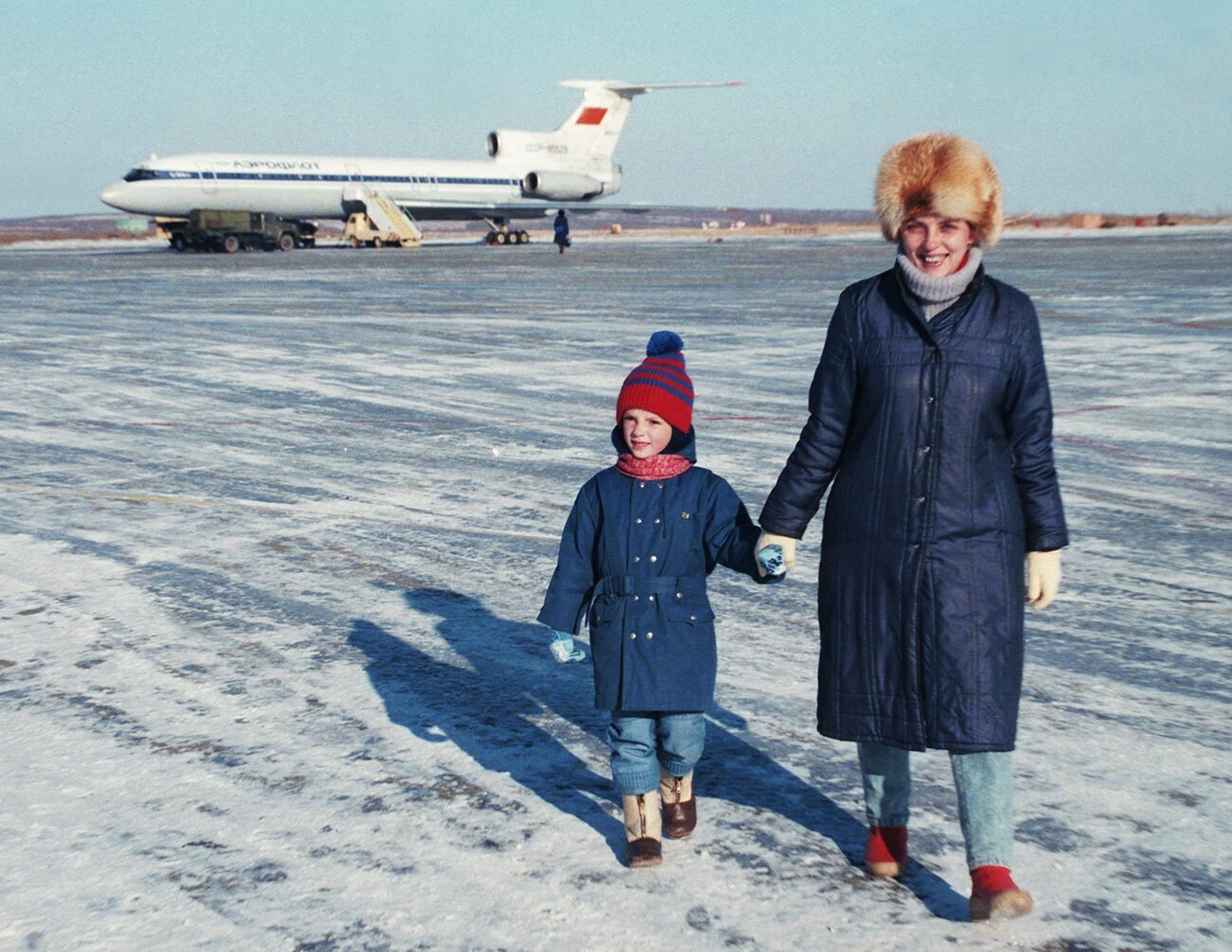 Despite all her injuries, Larisa managed to walk. In the evening, it started to rain and she found a light piece of the fuselage to shelter under. She was terribly cold and used seat covers to keep warm. On the first night, she heard snarling somewhere in the forest. It could have been a bear, but Larisa was still too shocked to think about it. She survived two days, drinking water from nearby puddles. As she lost most of her teeth, she couldn’t even eat berries. She remembered: “I heard helicopters and sent them signals: I found a red seat cover and started waving it. They saw me with this cover, but thought I was the cook of the geologists having fun. Their camp was somewhere nearby.” On the third day, she remembered that Vladimir had matches and cigarettes in a pocket of his jacket.

The search group found Larisa sitting in the chair, smoking. “When the rescuers spotted me, they couldn’t utter anything other than ‘moo, moo’. I understand them, three days retrieving pieces of bodies from trees, and then suddenly seeing a living person.” she recalled. Nobody believed anyone could survive such a crash (this is actually the reason why Larisa was found so late). “I looked like nothing on earth. I was all prune-colored with a silver shimmer - the fuselage paint turned out to be unusually sticky, my mother was picking it out for a month. And my hair turned into a big piece of glass wool because of the wind.” After the rescuers came, Larisa couldn’t walk anymore. She explained: “As I saw the people, I ran out of strength.” The rescuers had to cut down some birch trees to let a helicopter land and take the only survivor to Zavitinsk. “Later, in Zavitinsk, I found out that a grave had been dug for me. It was dug according to the passenger log.”

Larisa’s treatment was very difficult, but, all in all, her body managed to recover from its terrible injuries. She was in line to get a disability status, due to the sum of her traumas, but the commission decided they weren’t heavy enough. Larisa also got a really small compensation - just 75 rubles (approx. $117 according to the exchange rate in 1980), while an average monthly wage in the USSR was roughly 178 rubles (approx. $278). Larisa Savitskaya holds a Guinness World Record as a person who received the smallest payment ever after a plane crash.

Meanwhile, the plane collision was made secret immediately. Soviet newspapers didn’t write anything about the catastrophe. Regarding the official investigation results, authorities declared the pilots and the air traffic controllers to blame for the collision. Larisa Savitskaya was only given these results in the 1990s. And the first report appeared only in 1985 in a newspaper ‘Sovetsky Sport’ (“Soviet Sport”). Larisa Savitskaya recalled: “Looks like they really wanted to write about it, but it was prohibited to mention the crash. So they created that I, like a sort of Ikarus, flew on a hand-made aircraft and fell from the five kilometers height, but survived, because a Soviet person can get through anything.” 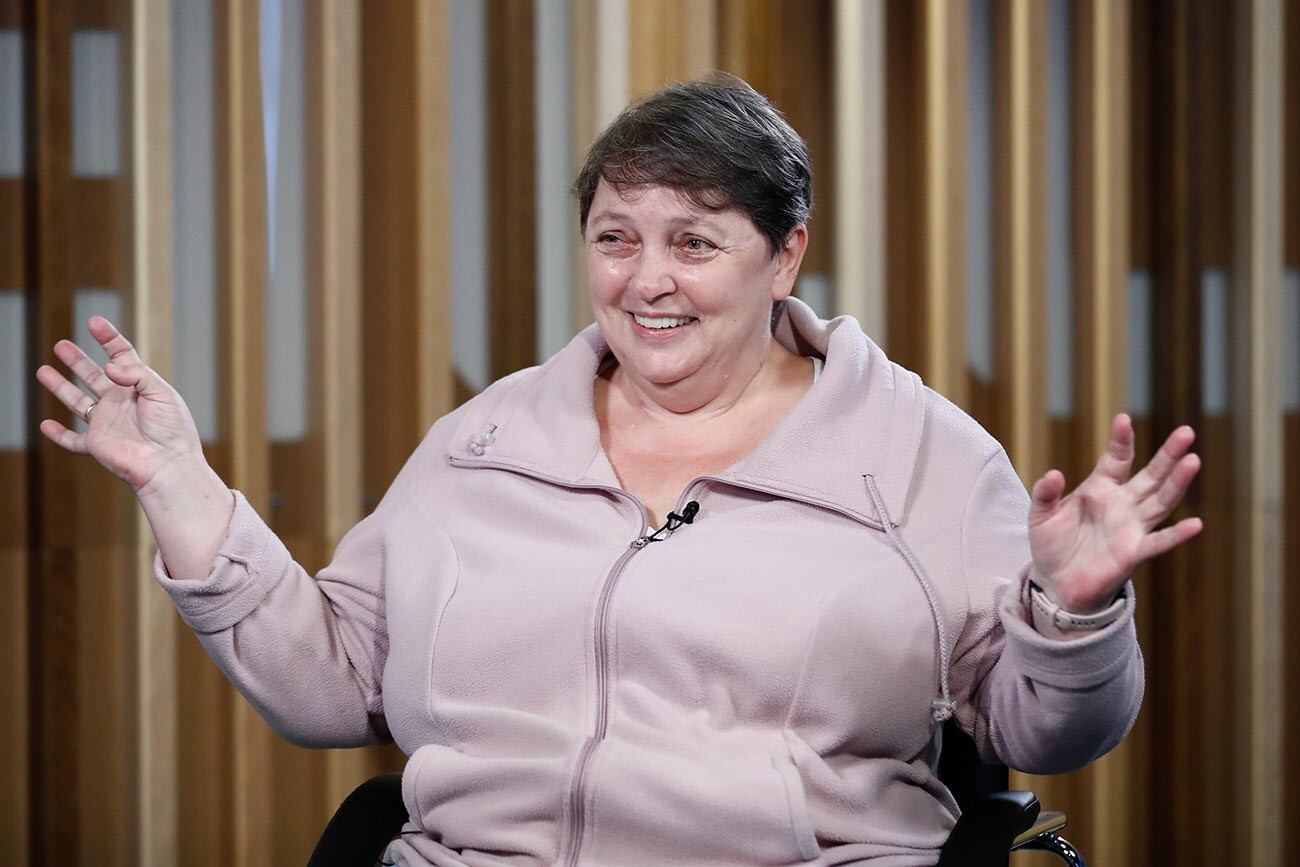 Later, Larisa moved from Blagoveshchensk to Moscow. It was too hard for her to live in the city where everything was associated with Vladimir. In the capital, she got interested in psychophysiology. Even 40 years after the crash, she admits that she remembers everything and the recollections still make Larisa suffer. At the same time, she believes “missiles never fall twice in one place”, so she isn’t afraid of flights. In 2020, Larisa Savitskaya participated in making the movie ‘Odna’ (“Alone”) by director Dmitry Suvorov. She was an advisor to the script writers and actors to make sure the movie is genuine.

Larisa Savitskaya says: “The idea still lives inside me that it’s possible to learn to survive in such situations.”