Revolt and primordial instincts: A brief history of Russian-style anarchy 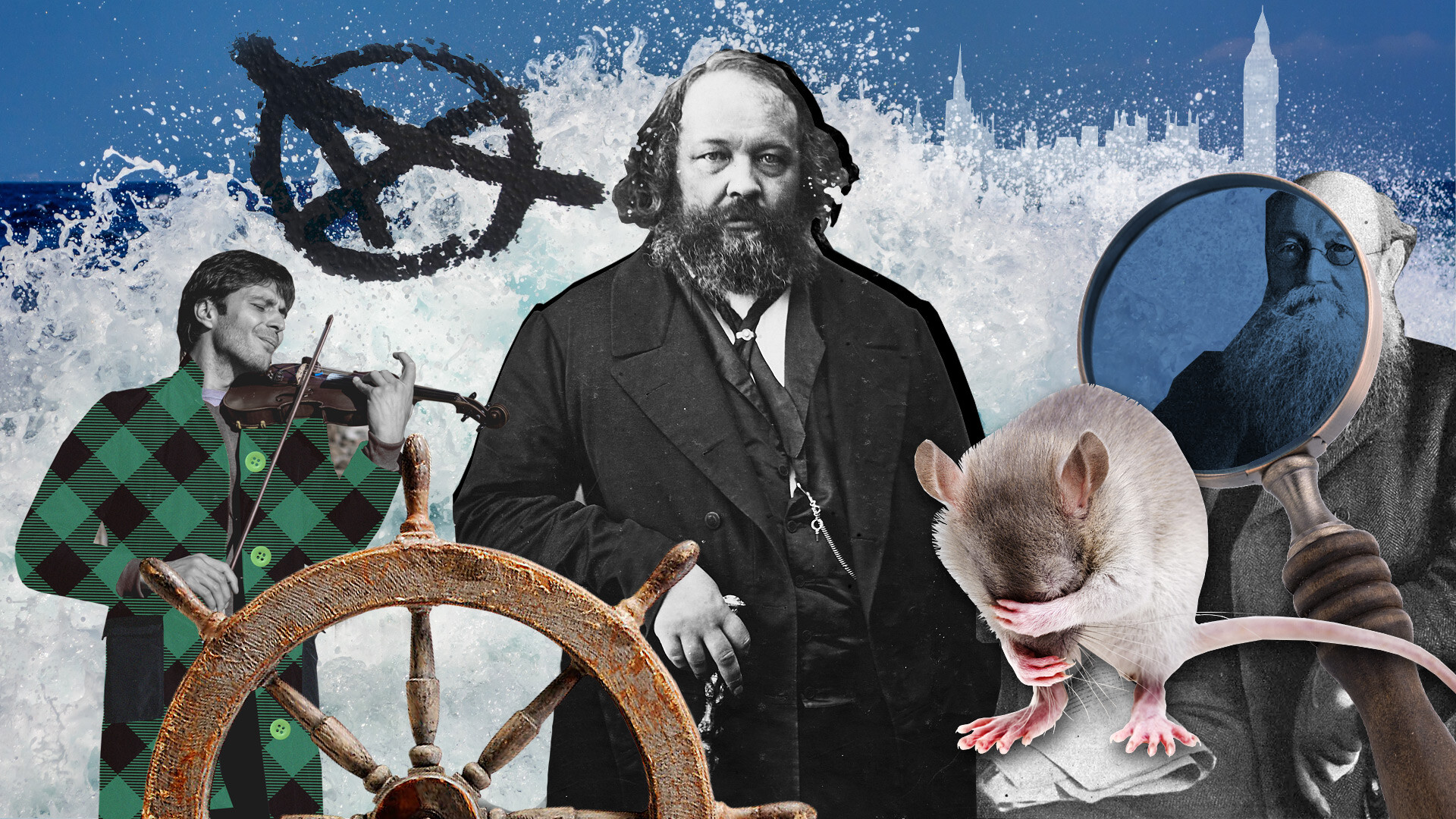 Kira Lisitskaya (Photo: Public domain, Unsplash, Pixabay)
Russian anarchists developed the movement's philosophy not only in word, but also in deed: Mikhail Bakunin nearly staged a revolution with the help of Swiss watchmakers, while Pyotr Kropotkin made a daring escape from the Peter and Paul Fortress.

Why do rebellious French students write “Read Bakunin!” on the walls of the Sorbonne today? And this is in the homeland of Proudhon (1809-1865), the French thinker who was the first to call himself an anarchist, equate private property to theft and advocate free labor. What did the Russian apostles of anarchism, Mikhail Bakunin and Pyotr Kropotkin, do to become globally-recognized symbols of the movement?

An alternative to the state, according to Mikhail Bakunin 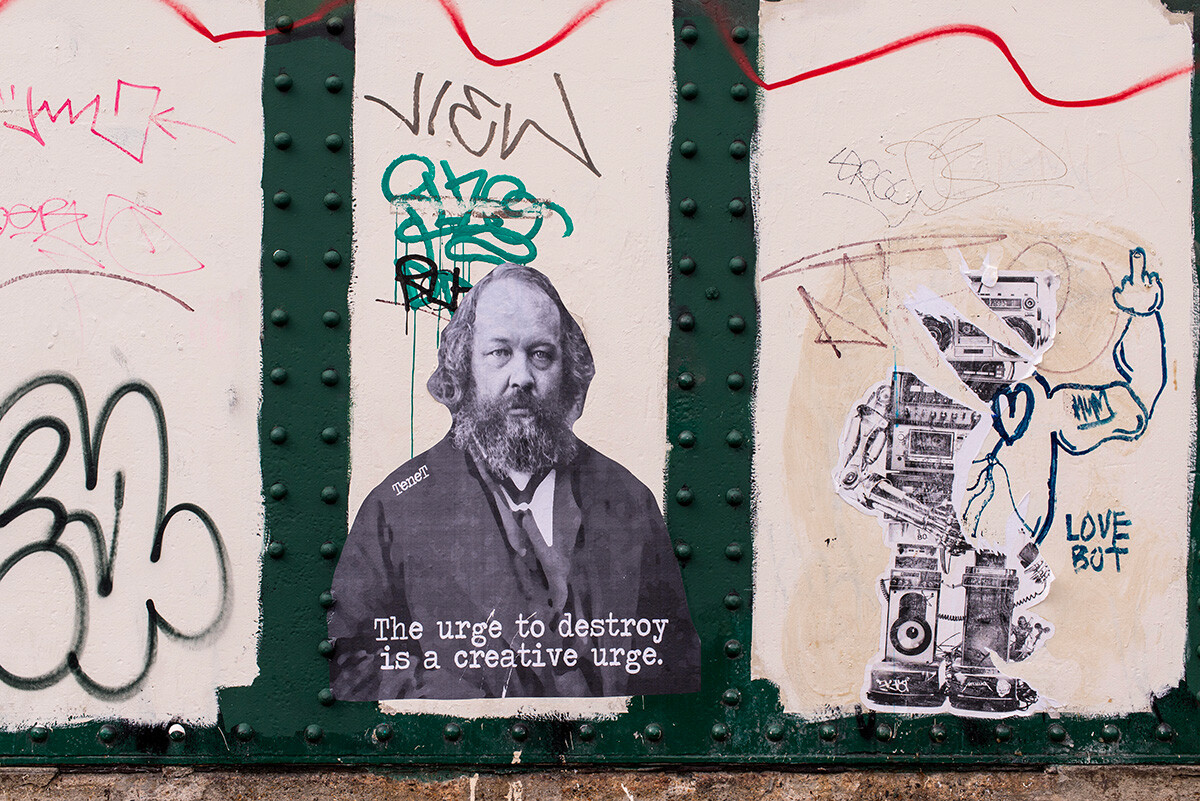 Sticker on a wall representing Bakunin and the quote "The urge to destroy is a creative urge."

“To seek my happiness in the happiness of others, my dignity in the dignity of all those around me, to be free in the freedom of others – this is my faith,” wrote Mikhail Bakunin (1814-1876), a staunch opponent of autocracy. He came up with a real alternative to the state: a new type of society built on the principles of voluntariness and self-organization. Bakunin sought to replace power with federalism, capitalism with collective property and religion with education.

Bakunin chose a life of struggle over a life of pursuing philosophical abstractions in his estate near Tver. Having traveled to Europe to attend lectures by Hegel’s students, he soon realized that he would not be going back to Russia. When, in 1845, newspapers in Paris published Nicholas I’s decree stripping Bakunin of all rights in his homeland, the Russian émigré responded with public criticism of tsarism.

In Switzerland, the target audience for Bakunin’s anarchist propaganda were watchmakers. In their houses in the canton of Jura, they not only assembled intricate miniature mechanisms, but also read a lot, so it is not surprising that they took the Russian rebel’s teachings close to heart. In the towns around La Chaux-de-Fonds, Bakunin set up his own version of the Second International (which itself was an organization of socialist and labor parties from 1889 to 1916), called the ‘Jura Federation’. 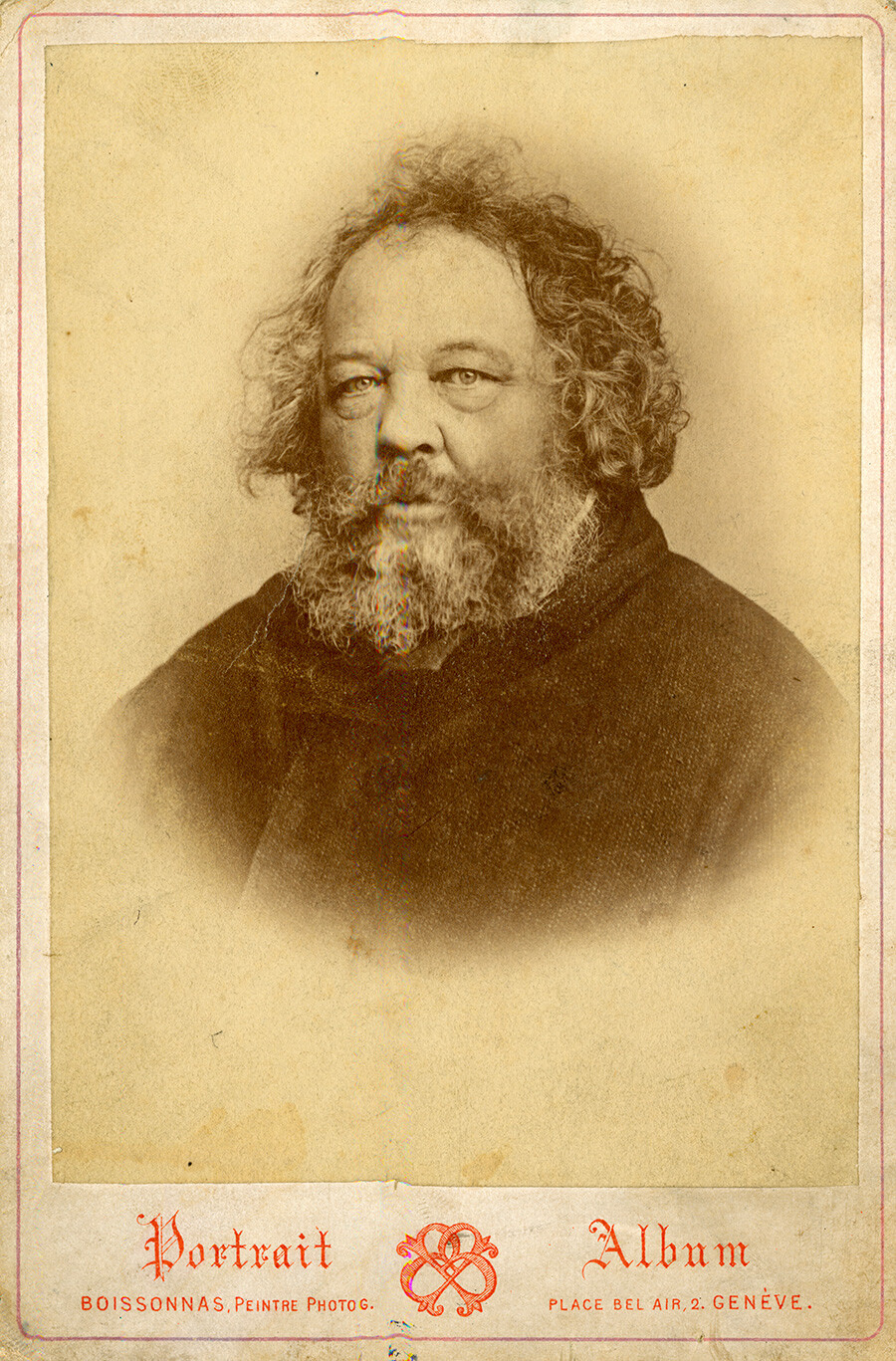 The 1848 revolution in Paris, the barricades in Prague, the Polish uprising, the creation of the Spanish section of the International, the anarchist movement in Bologna - Bakunin always found himself at the epicenter of any revolutionary conflagration. “The spirit of negation is a spirit of creation, the urge to destroy is also a creative urge,” the anarchist believed.

During the Dresden uprising of 1849, he suggested putting masterpieces from the Dresden Gallery onto the barricades in the hope that the Prussian troops would not dare shoot at them for aesthetic reasons. The uprising was suppressed, the Dresden Madonna was not damaged and Bakunin was sentenced to death in two countries at once - in Saxony and Austria. He spent six months chained to the wall in Olomouc. When it was announced that the prisoner would be handed over to the Russian authorities, Bakunin twice tried to starve himself to death and tried to poison himself with phosphorus matches, but “he ate them without any effect on his robust health,” Natalia Tuchkova-Ogaryova is quoted as saying in Mikhail Shishkin’s book ‘Russian Switzerland’.

In the dungeons of the Peter and Paul Fortress and Shlisselburg, Bakunin lost all his teeth – due to scurvy. Later, he recalled: “A life sentence is a terrible thing. An existence without purpose, without hope, without interest! With a terrible toothache that lasted for weeks..." 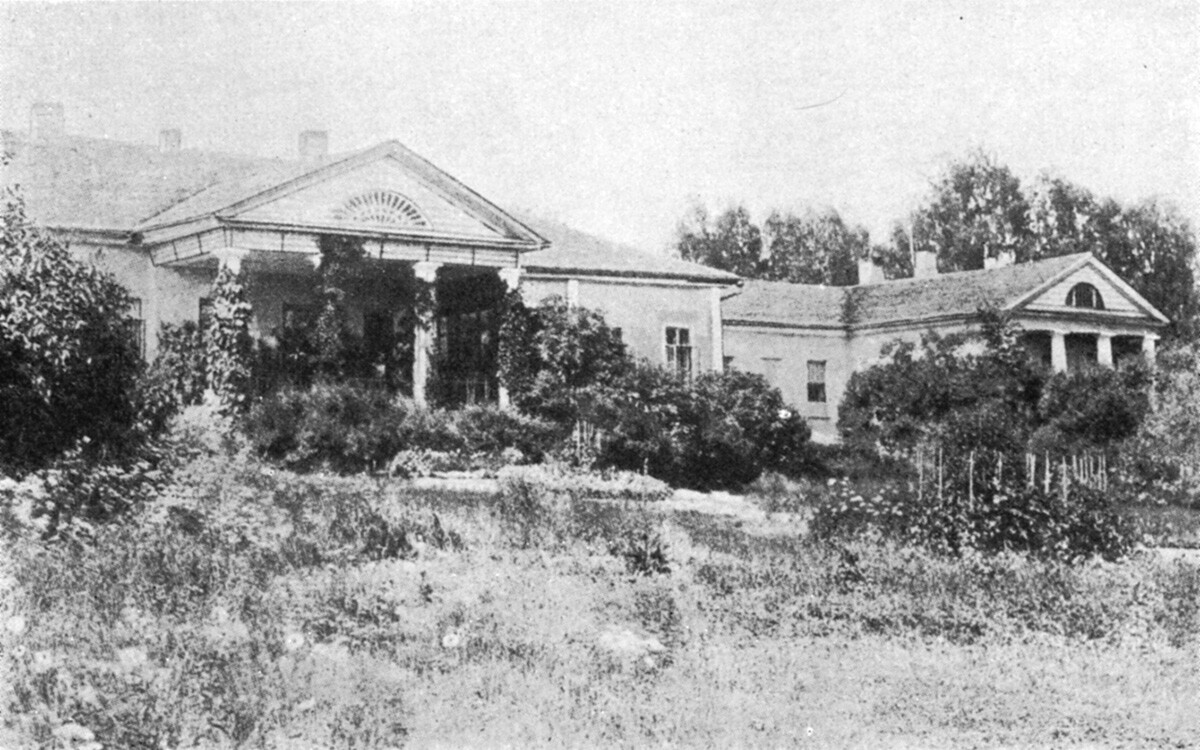 In prison, Bakunin wrote ‘Confession’, in which he condemned his “sins” and thanked God (although he was not a believer) that his plans were not realized. After yet another repentant letter, the “praying sinner” was released from prison and exiled to Siberia for life.

Bakunin said there was nothing for him to do in Siberia, so, in 1861, having been granted permission to travel along the Amur for scientific purposes, he pulled off the longest, geographically speaking, escape, leaving his wife behind in Irkutsk. “There are no rights and no obligations,” Bakunin preached. “There is only love, an absolute love and, when there is love, there are no obligations.”

Bakunin wrote to his friend Turgenev: “The Amur <...> is a good river, with steamboat navigation and American boats go to Nikolayevsk at the mouth of the Amur. So, I went down the Amur to Nikolayevsk on a steamer and, from there, on an American clipper ship to Japan and from Japan to San Francisco, New York, Boston and London.” In London, he joined the first Russian revolutionary newspaper ‘Kolokol’ (“The Bell”) and began fighting against Marx’s authoritarianism. “Strong people are incredibly preserved by prison and exile…; they emerge from them, as if after a fainting fit, picking up where they left off when they lost consciousness,” the revolutionary Alexander Herzen wrote. 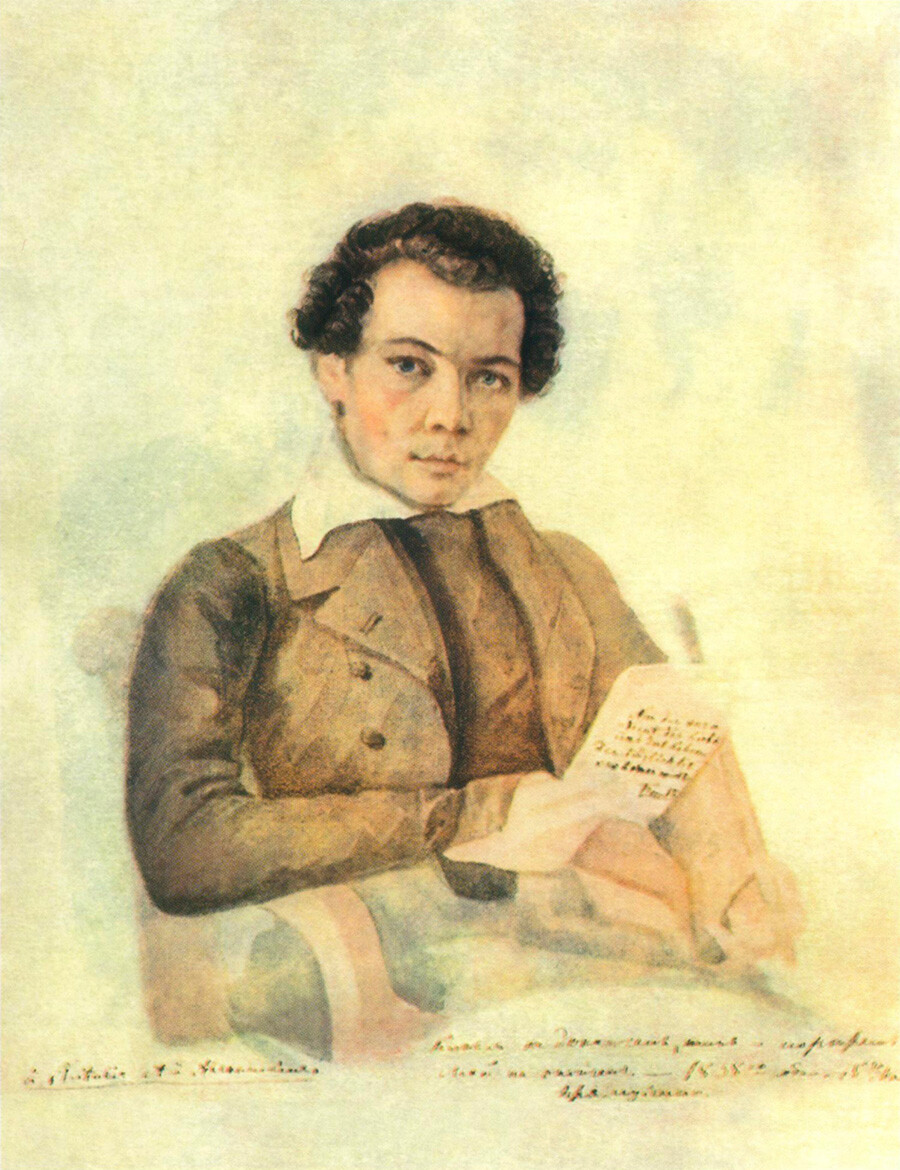 A watercolor self-portrait of Mikhail Bakunin from 1838.

Bakunin served as an inspiration for Richard Wagner’s ‘Siegfried’ and the protagonist of Turgenev’s first novel, ‘Rudin’. “Capable of the most vigorous activity, of undertakings that could only be conjured up in a dream or while reading Cooper - Bakunin was at the same time a lazy and damp man - perpetually in sweat, with a huge body, a lion’s mane and swollen eyelids, similar to a dog’s, which are so typical of Russian nobles,” the poet Alexander Blok wrote about him.

Bakunin lived without a care for tomorrow. Once, he spoke in front of his compatriots in Geneva and invited them to a dinner in a tavern: “Of course, it is my treat. Whoever does not accept my bread and salt is anathema.” The guests were being very modest and ordered half- portions, however, Bakunin insisted that everyone be served meat, cheese and several liters of wine. When the bill came, he rummaged in one pocket, then in another and burst out laughing: “In the absence of free cash, the state treasury is forced to resort to a compulsory internal loan. Valiant Russians, help me out.” He never repaid the money he borrowed that night. 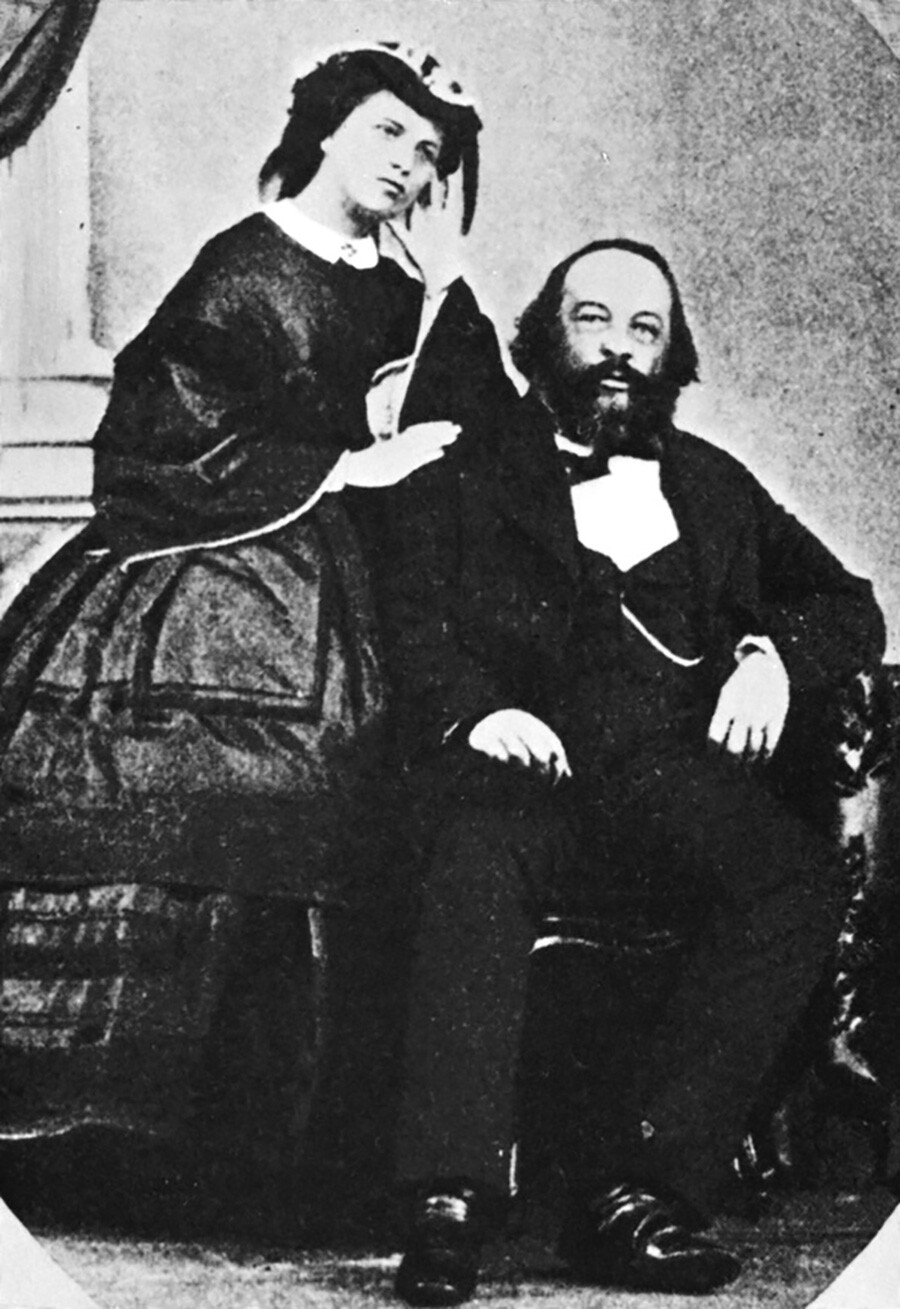 Bakunin spent his final years in penury, illness and persecution. He was expelled from the First International, while Marx and Engels called Bakuninism “the childhood of the proletarian movement, just as astrology and alchemy were the childhood of science”.

“A huge lump of fat, with the head of a drunken Jupiter, disheveled, as if he had spent the night in a Russian tavern... Formidable and pitiful, like the sight of a majestic building after a fire,” contemporaries wrote of Bakunin several years before his death.

He died in Bern, in a hospital for laborers, where he was placed at his own insistence.

A century later, the French existentialist Albert Camus wrote that Bakunin was a direct forerunner of Lenin and Stalin: “...The dream of a revolutionary Slavic empire as Bakunin presented it to the tsar was - down to such details as borders - realized by Stalin." 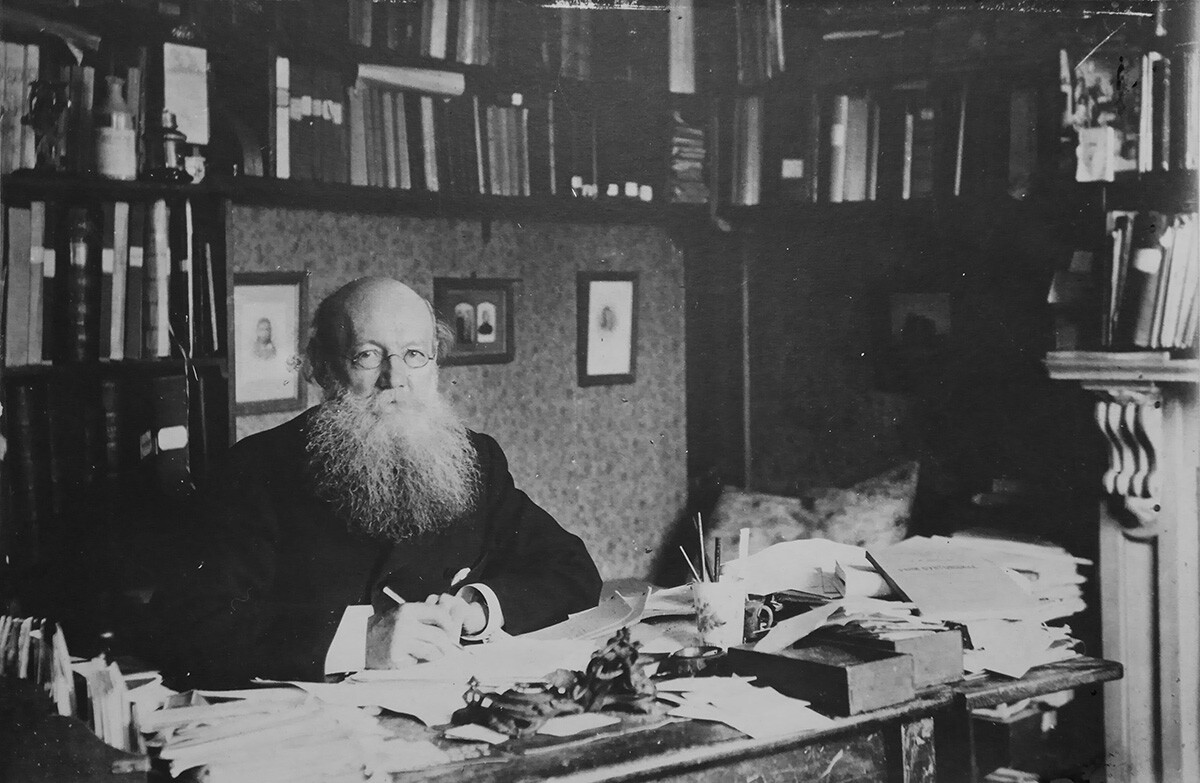 The violinist started playing Kontski’s frenzied mazurka. “‘Now or never!’ flashed through my mind. I threw off my green flannel robe and started running,” was how hereditary prince, scientist and anarchist Pyotr Kropotkin (1842-1921) described his fantastic escape from prison.

An outstanding geographer and geomorphologist, he studied the tectonic structure of Siberia and Central Asia, the theory of glaciers, and predicted the existence of the land which was later named after Franz Josef. It was through observing nature that Kropotkin came to his idea of scientific anarchism - building society based on humans’ good nature.

Unlike Darwin’s followers, the Russian scientist saw in animals not intraspecific struggle, but cooperation. “Even such quarrelsome animals as rats, which are always squabbling among themselves in our cellars, are smart enough, not only not to quarrel when they are robbing storerooms, but to help each other during their raids and migrations. It is known that they sometimes even feed their infirm and disabled fellows,” the scientist wrote.

By analogy with animals, Kropotkin considered mutual assistance to be the key to the progress of society. Kropotkin’s anarchism is not just a philosophical idea, but a tendency of natural life itself. While Bakunin’s rebellion was directed against human nature – its “animal nature” - Kropotkin appealed to it: give people freedom and they will do good. 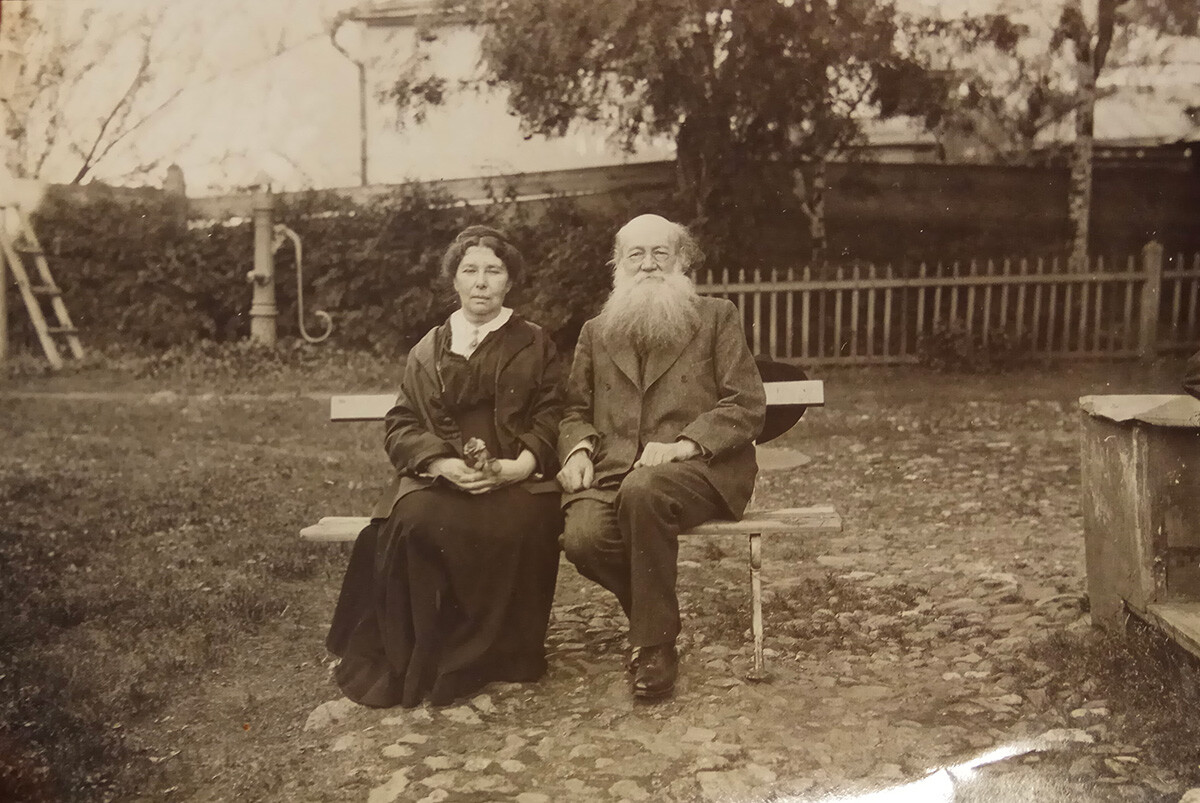 Kropotkin and his wife in Dmitrov.

The prince saw shoots of anarchist communism in his contemporary society - in libraries, worker cooperatives and community services, which operated for the benefit of society. According to Kropotkin, anarchy without communism boiled down to the arbitrariness of selfish individuals, while communism without anarchy amounted to despotism.

Kropotkin’s own marriage was based on anarchist principles: equality in the family union was protected by a three-year contract. The prince’s marriage lasted until his death at the age of 78, with the contract having been extended 14 times.

His theory of mutual assistance did not fail Kropotkin even in captivity: in 1874, the scientist was imprisoned in the Peter and Paul Fortress for agitation as a member of a revolutionary circle. The years spent in a damp cell undermined the prince’s health. He was transferred to a military hospital and when, according to the doctor, Kropotkin had no more than ten days to live, an escape plan was conceived, which was carried out with his friends’ help. 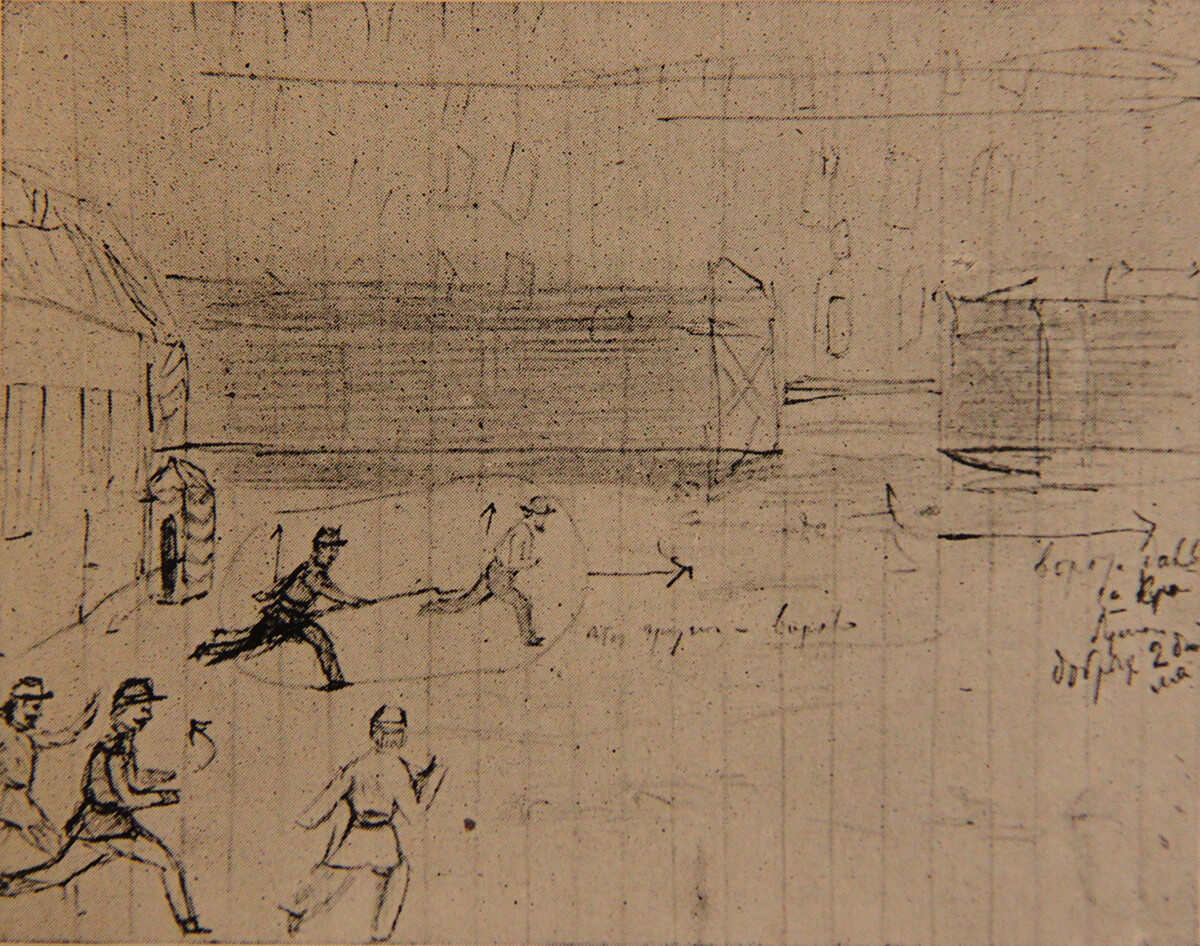 Under the plan, the prisoner was to flee during his hour-long walk under supervision. His associates rented a dacha opposite the hospital and devised a system of signals: flashing lights, balloons, a man eating cherries... The finalized escape plan, written in a cipher on a tiny piece of paper and hidden in a wrist watch mechanism, was handed over to Kropotkin by a female relative, who herself was risking her freedom.

When on the appointed day the prisoner went out for a walk, he heard the sound of a violin. It was interrupted now and then, but when the musician started playing a peppy mazurka, that was the sign that it was time. His guard, who served in the hospital laboratory, was being distracted by a talk about parasites under a microscope: “Have you seen what a big tail it has?” Exactly at that moment, Kropotkin was running past in order to jump into a cab and leave Russia for a long 40 years. “It was a wonderful evening. We drove to the islands, where the fashionable St. Petersburg goes on fine summer days, to admire the sunset,” Kropotkin recalled that day, years later, not without a touch of romanticism. 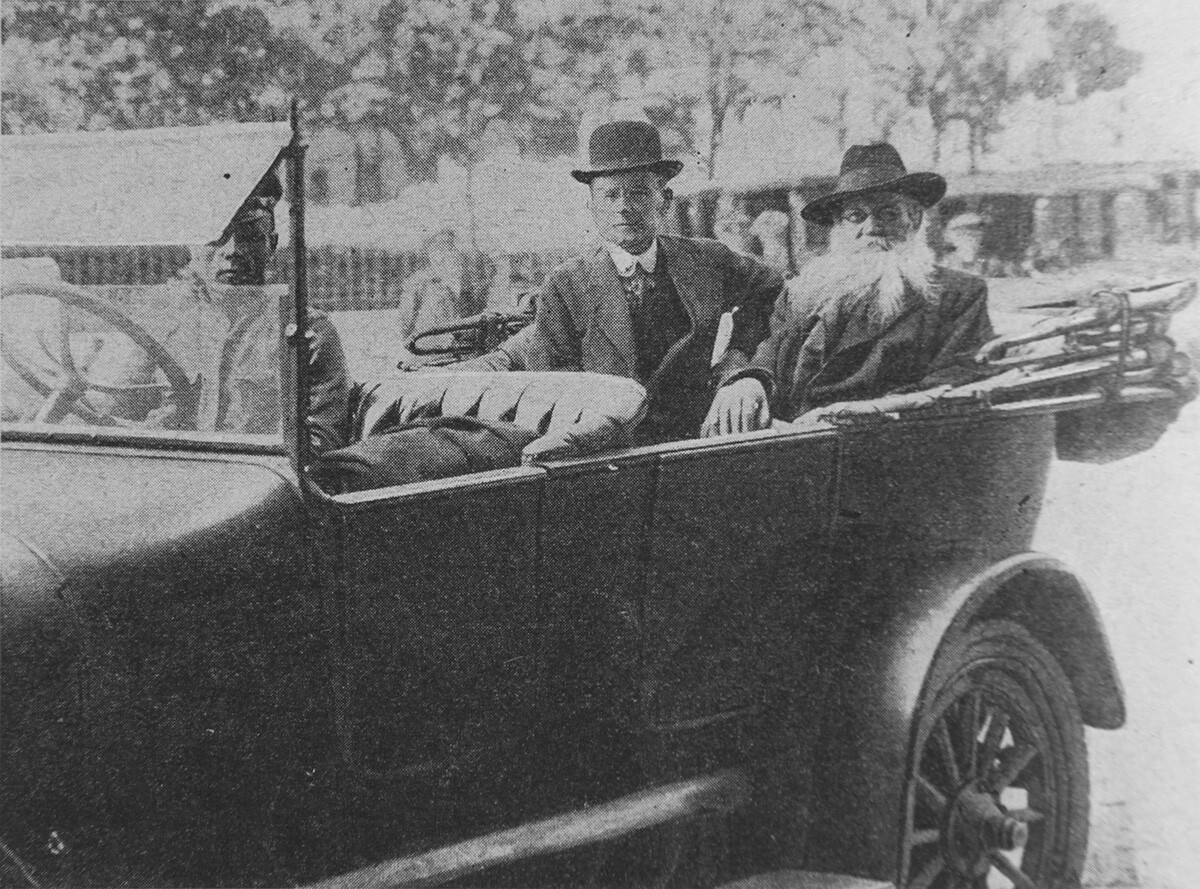 In emigration, the Russian prince earned the reputation of a theorist of anarchism and a world-class scientist. He returned to Russia only in the summer of 1917. The anarchist predictably refused a ministerial post offered to him in the government, but he spoke at a state meeting in favor of a federal republic - to the discontent of his young and more radical contemporaries. 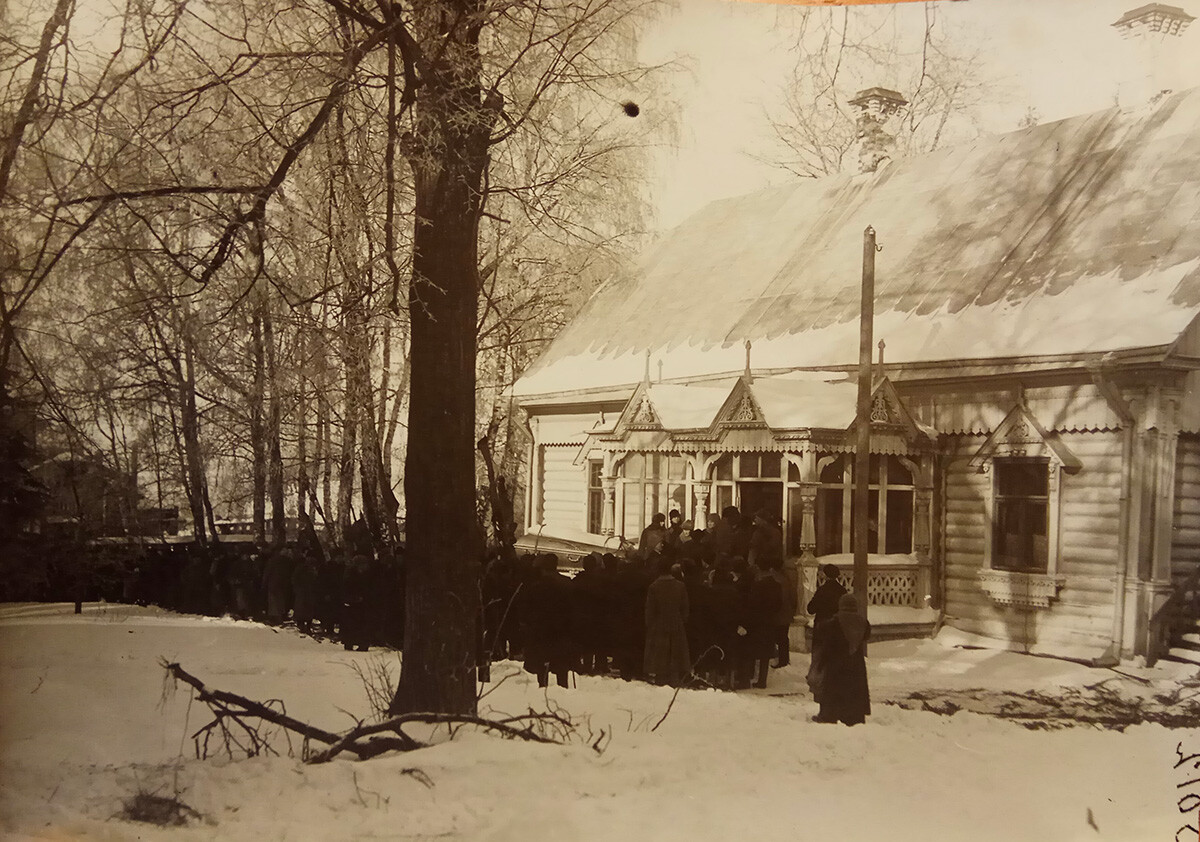 Kropotkin was personally acquainted with Vladimir Lenin, who, despite the scientist’s harsh criticism of him, on more than one occasion showed care for the elderly anarchist: he personally signed a document guaranteeing that the house in Dmitrov, where Kropotkin and his family lived, would not be requisitioned or shared with other tenants and, when Kropotkin fell ill, he sent the best doctors to him. 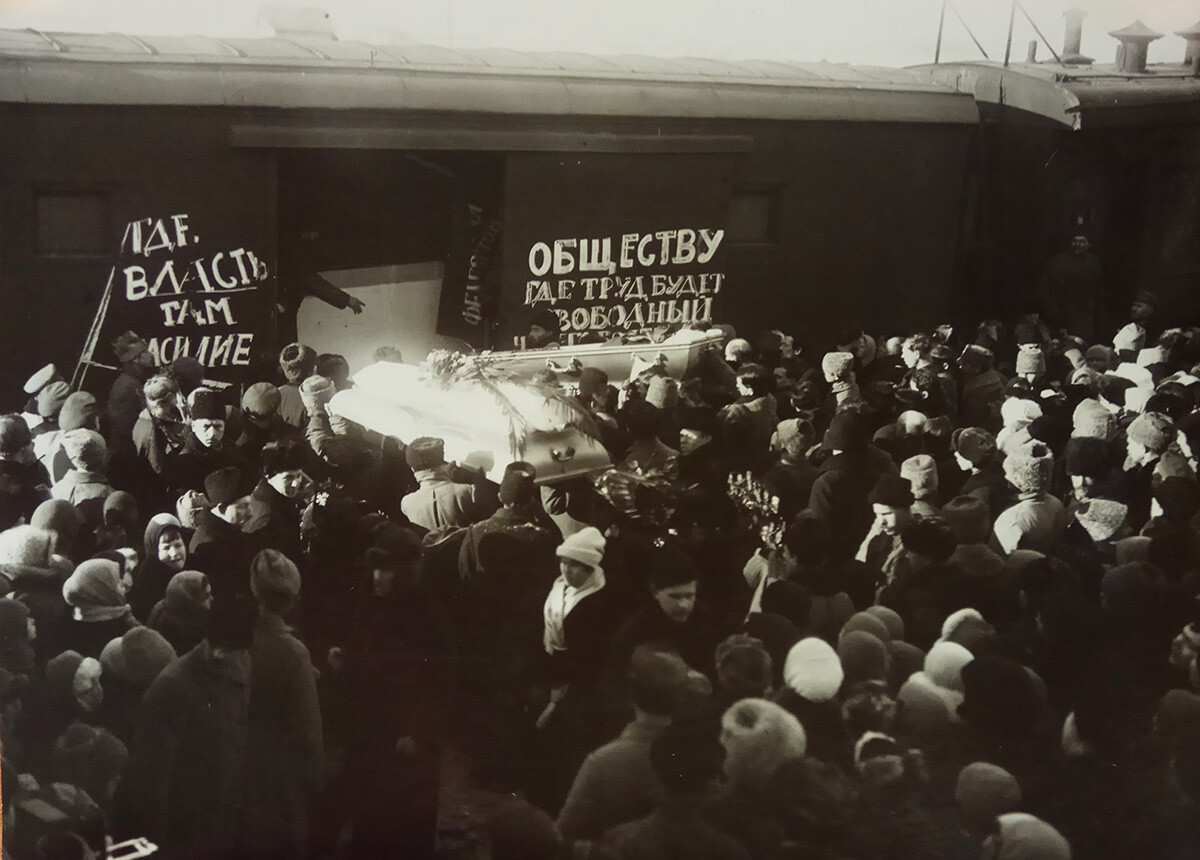 “It is one thing or the other. Either the state will crush the individual and local life, <...> bring with it war <...>, superficial revolutions that only replace tyrants, and as an inevitable end - death! Or the state must be destroyed and then a new life will arise in thousands of centers, on the basis of energetic, personal and group initiative, on the basis of a free agreement,” wrote Kropotkin, never losing his faith in the second option.