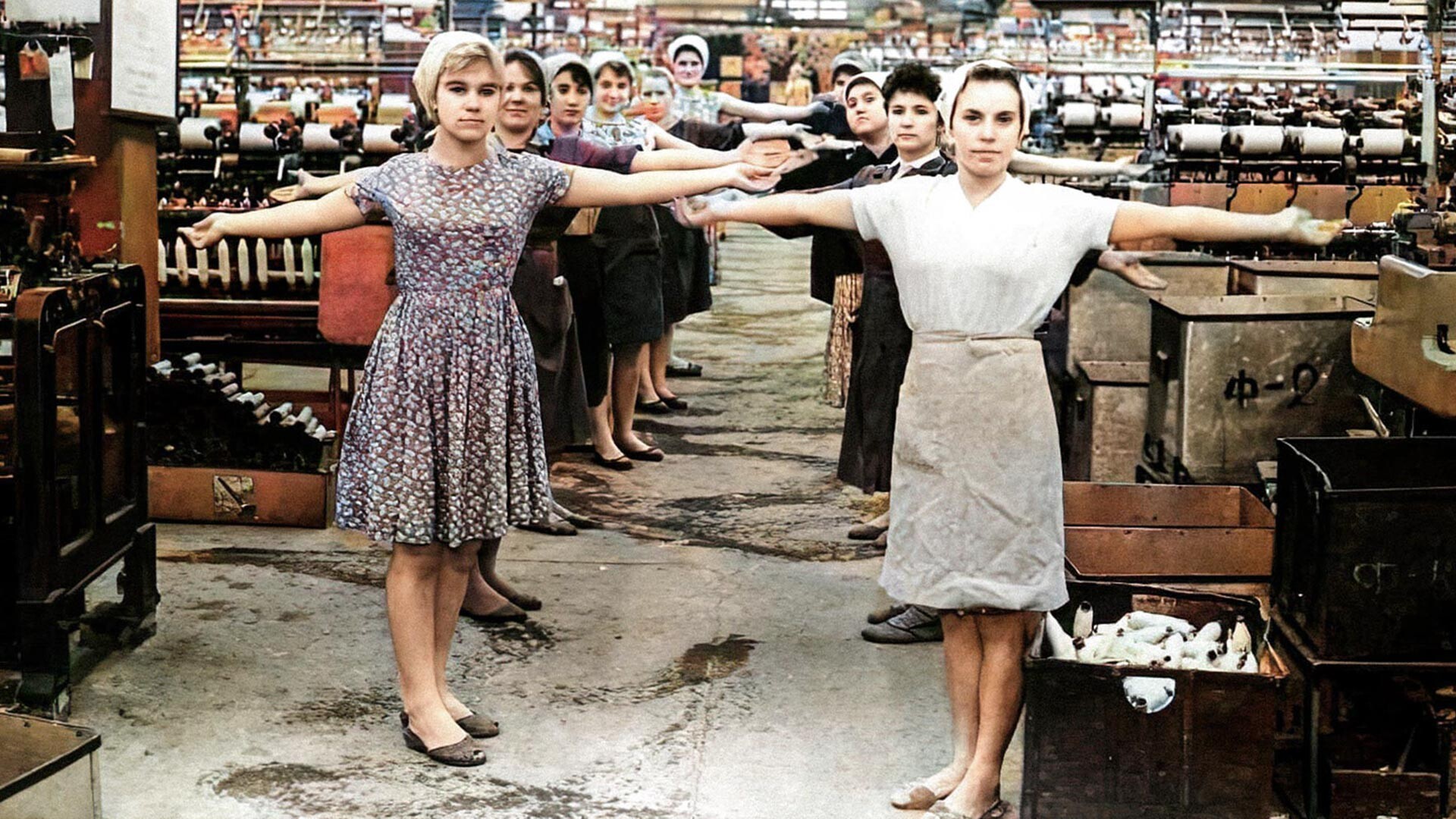 MAMM/MDF/russiainphoto.ru
Special breaks for sports exercises at factories, plants and offices were some of the most spectacular aspects of Soviet life. Where did the motivation come from and was this fitness easy?

“Every day at 10 am, workers of the Skorokhod factory begin gymnastics. After a few hours of work, there is a need for a short break for rest. That is why industrial gymnastics has been introduced at many enterprises in our country. After gymnastics, fatigue quickly passes and you can start working with fresh energy.” 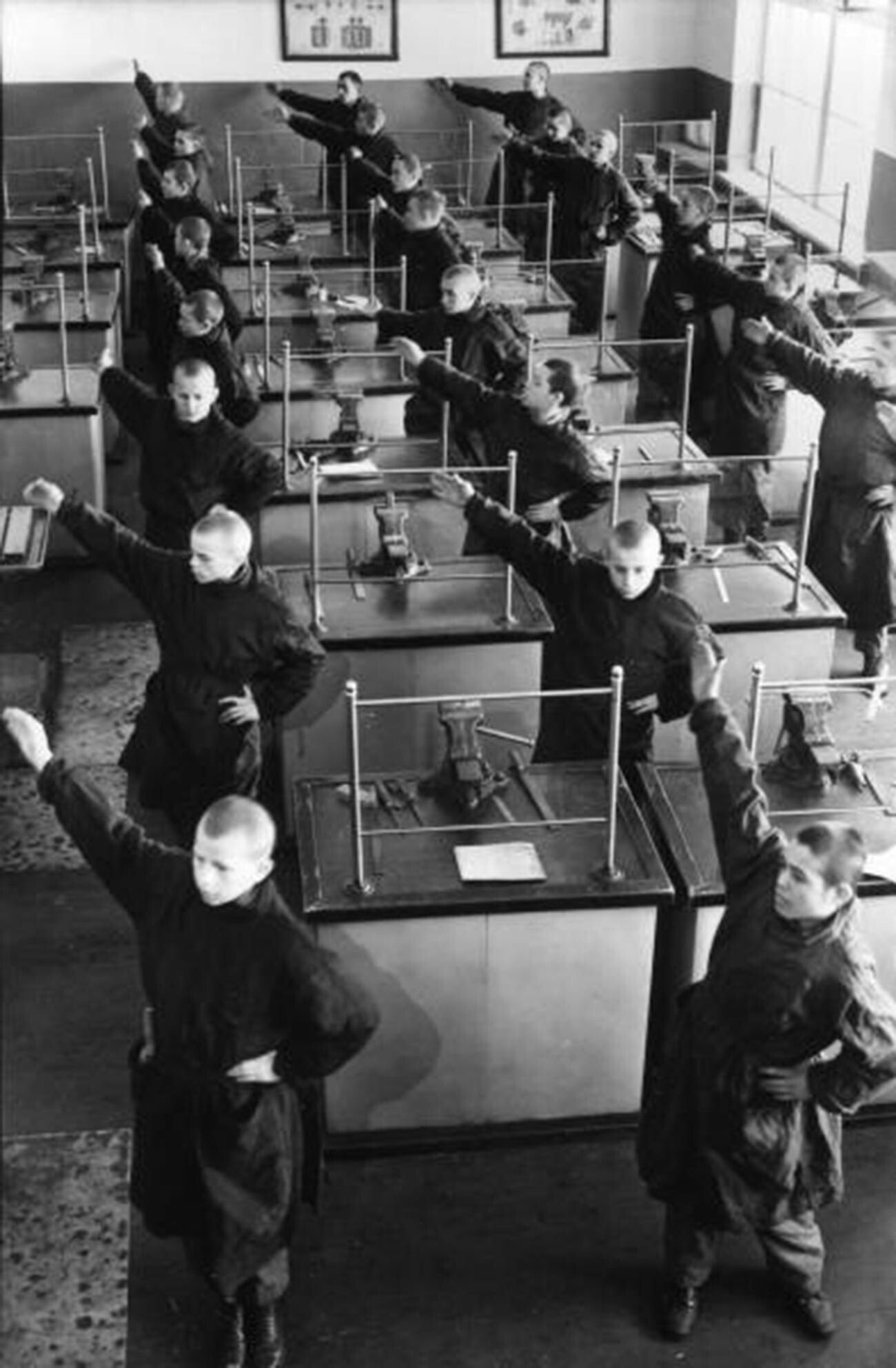 Fitness breaks were not exclusive to this shoe factory - they were implemented at any enterprise and in any office in the Soviet Union. These breaks were called “gymnastics at work” (“proizvodstvennaya gimnastika”) and sometimes - “a minute of physical education” (“fizminutka”). 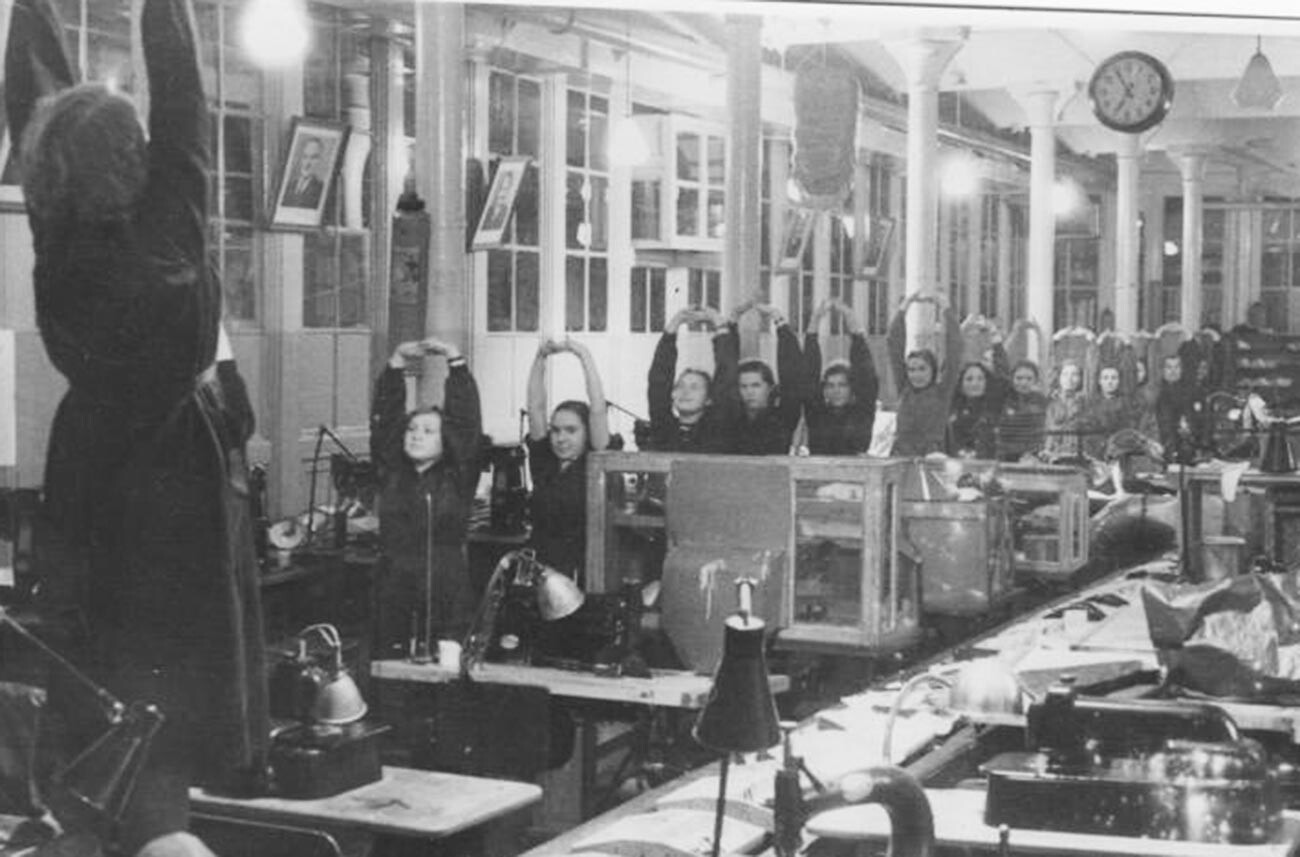 In Soviet times, lots of attention was paid to a sporty lifestyle. Of course, it doesn’t mean that all citizens were athletes. There were also plenty of very popular different activities, from amateur competitions to sports tourism. And there were also people responsible for organizing fitness breaks during work hours. 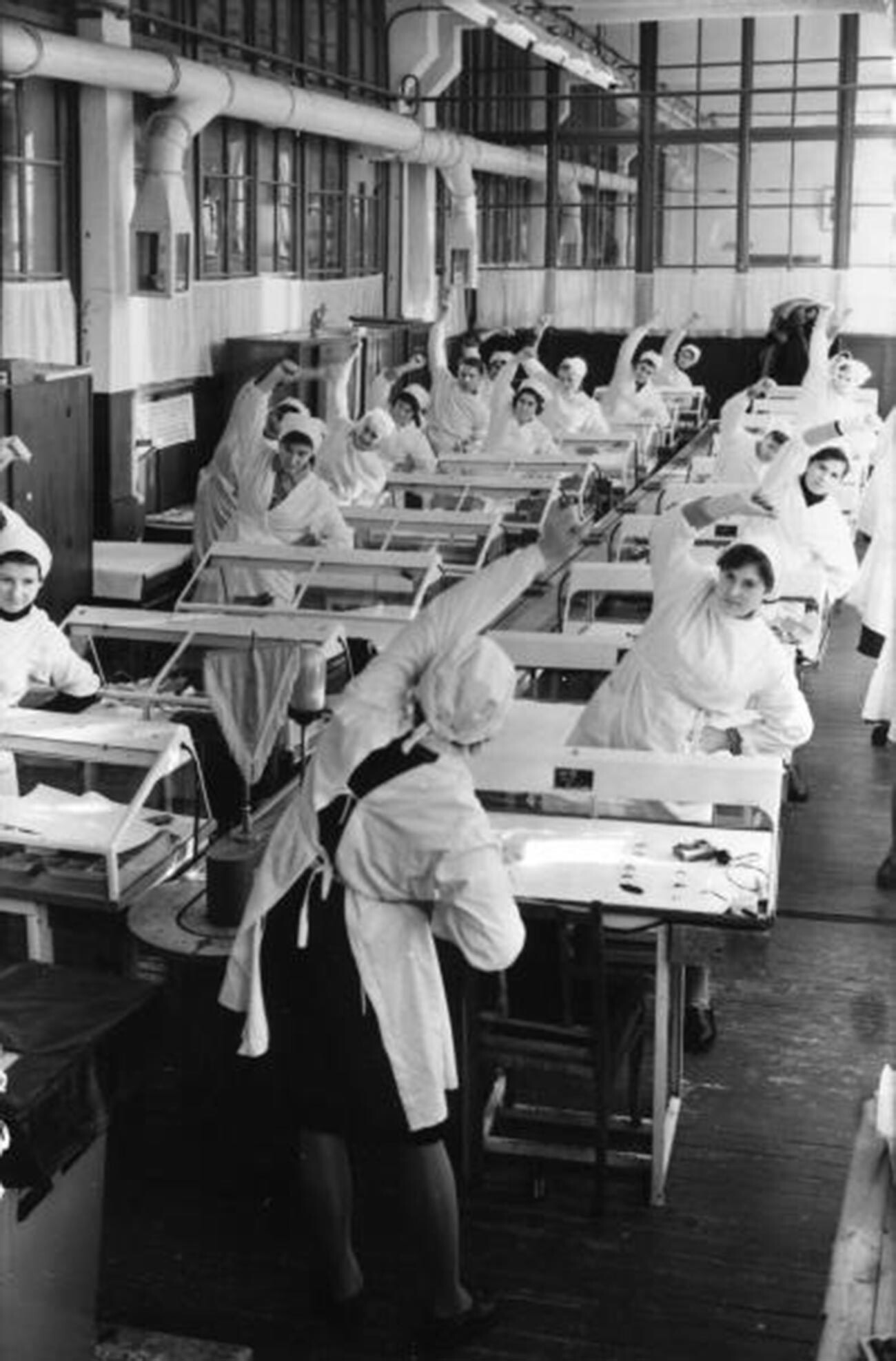 Gymnastics at work was officially introduced at plants and offices in 1956 at the state level, although it existed earlier and was carried out from time to time. But after a decree by the Soviet government, it was implemented everywhere. 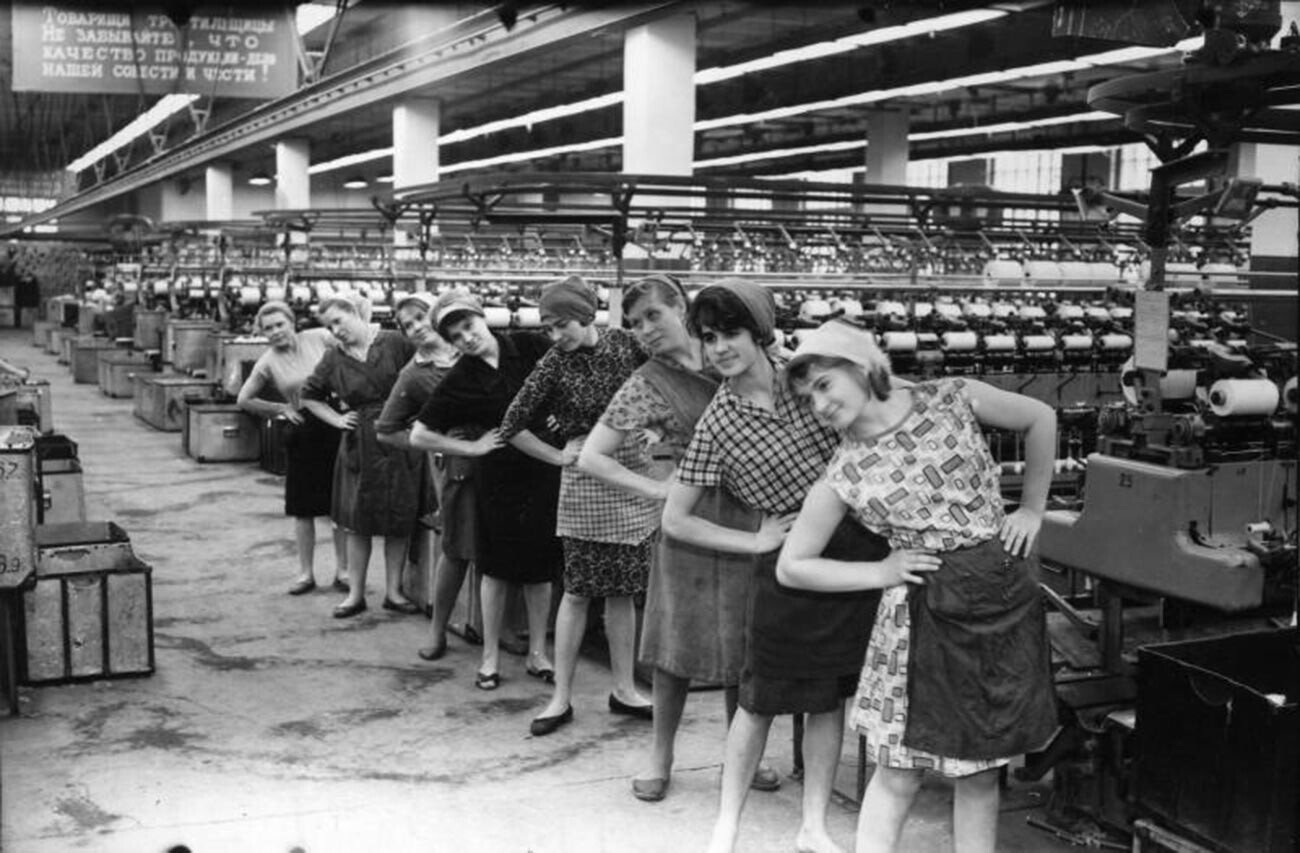 As a rule, fitness breaks were held twice a day and lasted for ten minutes. It was an hour or two before lunch and an hour before the end of work. At this time, the conveyor belts at many factories would even stop and all workers would do exercises. 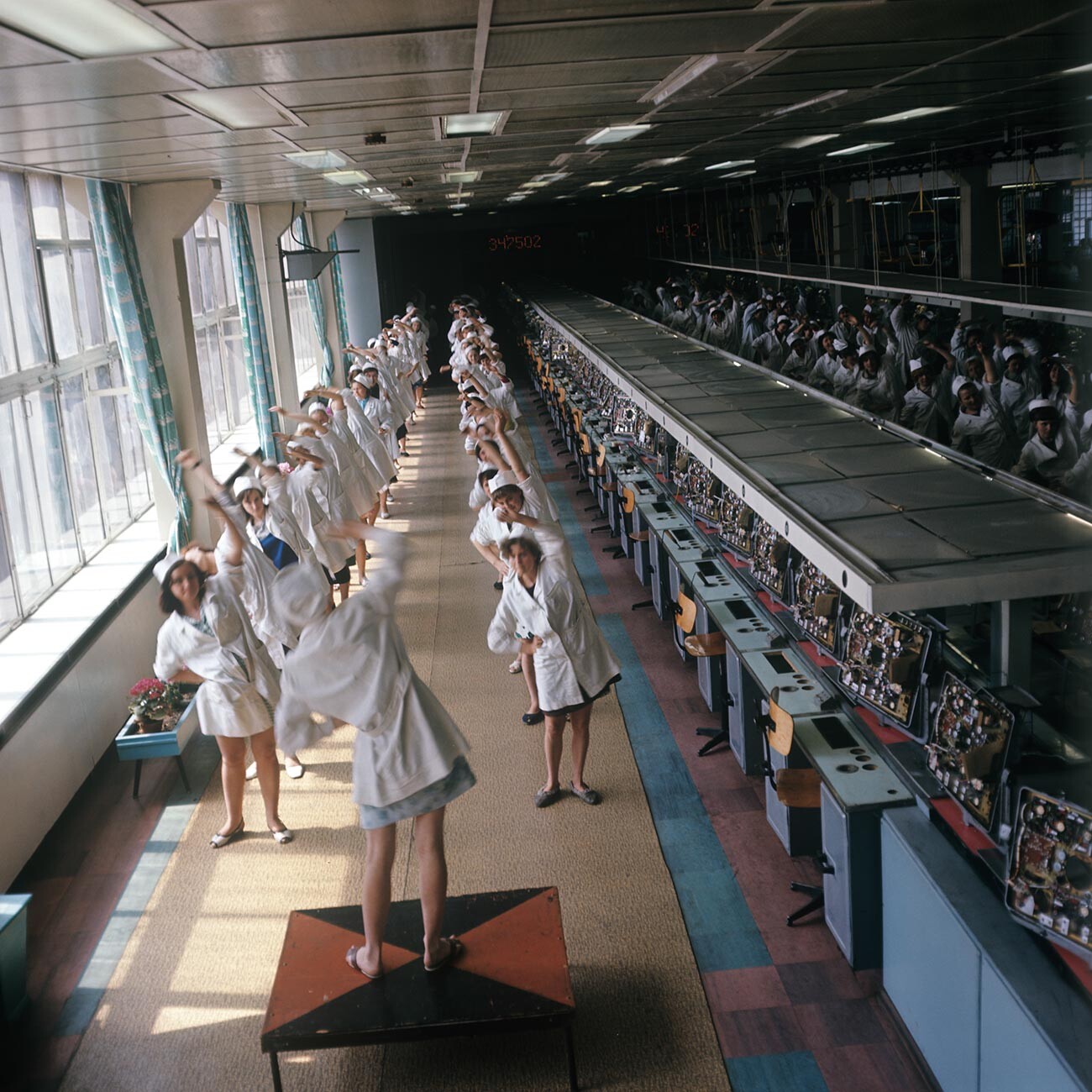 Workers at the Electron production association, 1973.

Between 1961-1991, a special ten minute program ran on weekdays on the All-Union radio station (Radio-1). At 11 am, the voices greeted the Soviets and invited them to do some exercises. 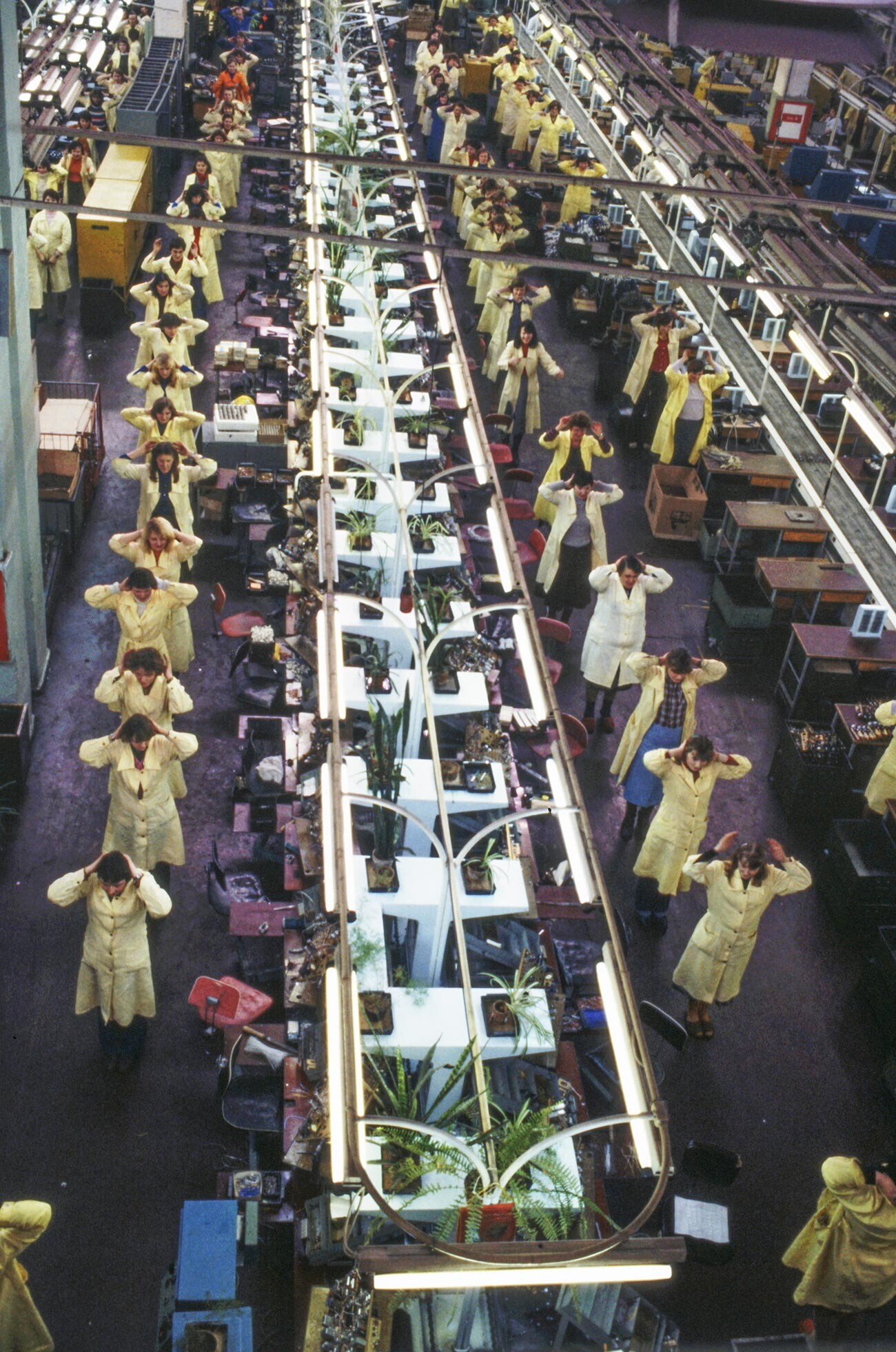 In the early 1970s, a position of gymnastics instructor appeared at large plants and offices, who was responsible for the organization (and other sport events). In the 1980s, this experience was extended to collective farms (kolkhozes) and schools. 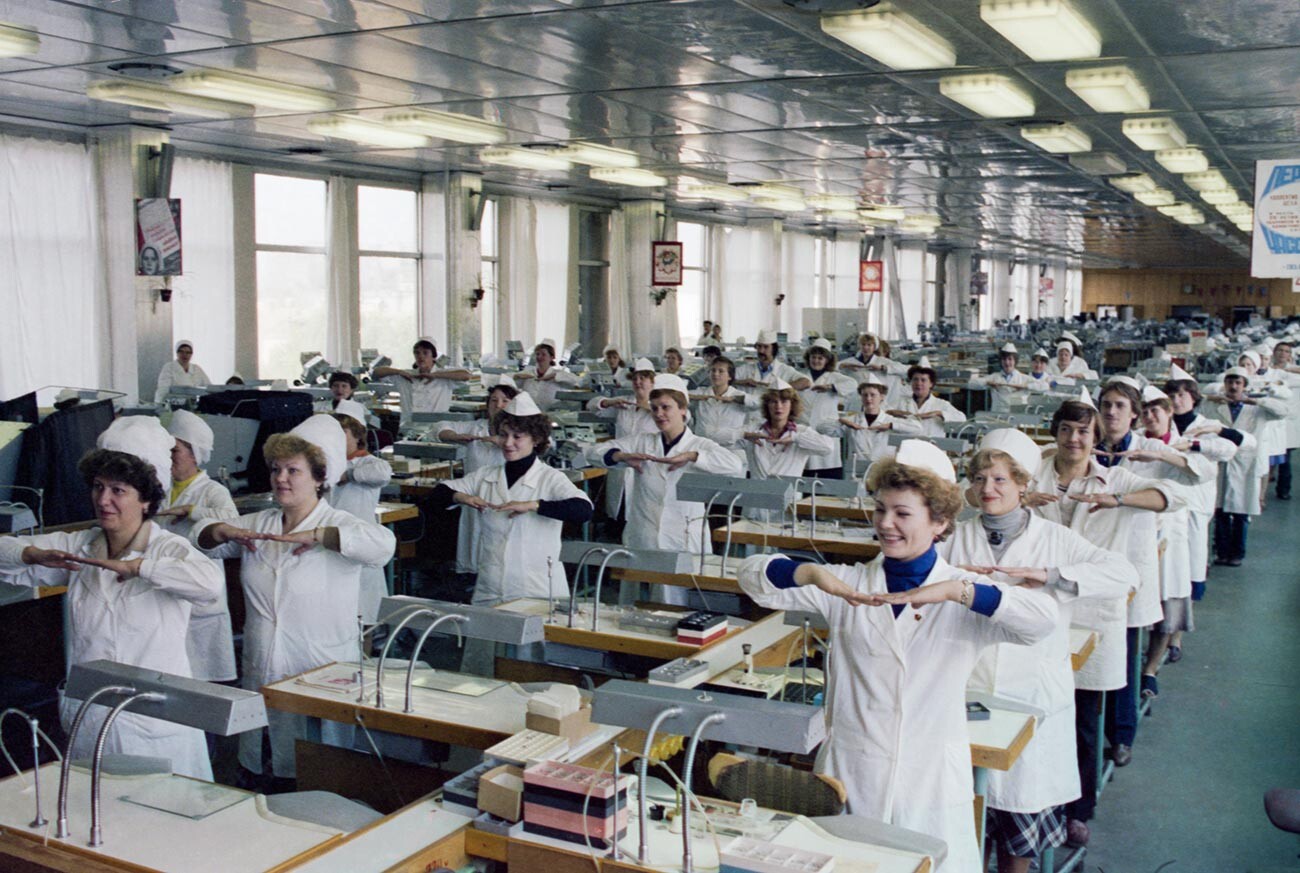 At the Moscow watch factory.

The exercises were quite simple: walking, stretching, bending, squatting. Even seniors could join in. Such small breaks could improve labor productivity, discipline and help preserve the health of workers. 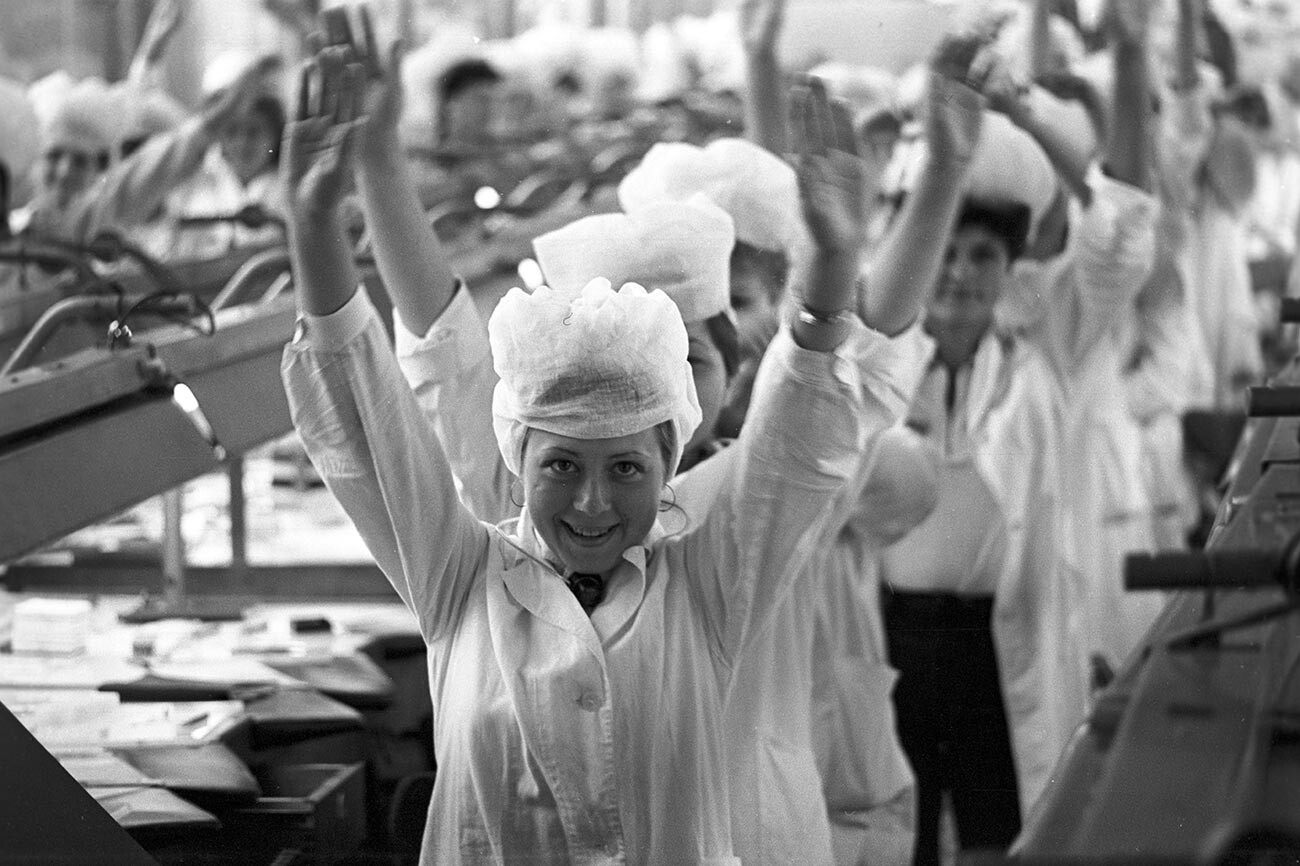 Doing exercises, however, was mostly voluntary. Some people didn’t want to interrupt the workflow, some were simply lazy. 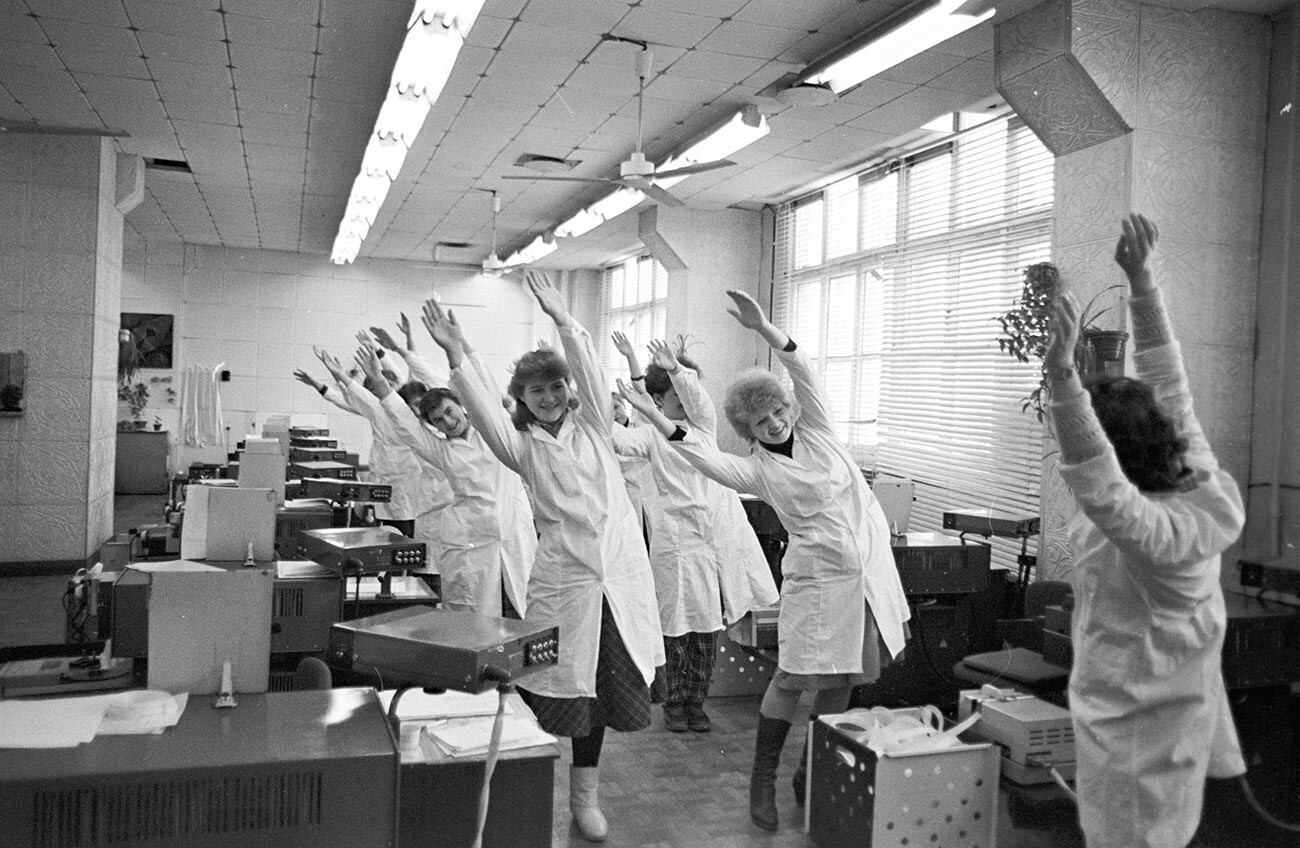 At the Chekhov printing plant.

“I happened to work at a jewelry factory back in the USSR. There, twice a shift, everyone, without exception, performed simple ‘industrial’ gymnastics,” recalls an Internet user. “I was very young then and, at first, it seemed silly to me. But, after a couple of months of sedentary work, I was already happy to warm up and did these gymnastics with joy. Only now do I realize how great it was.” 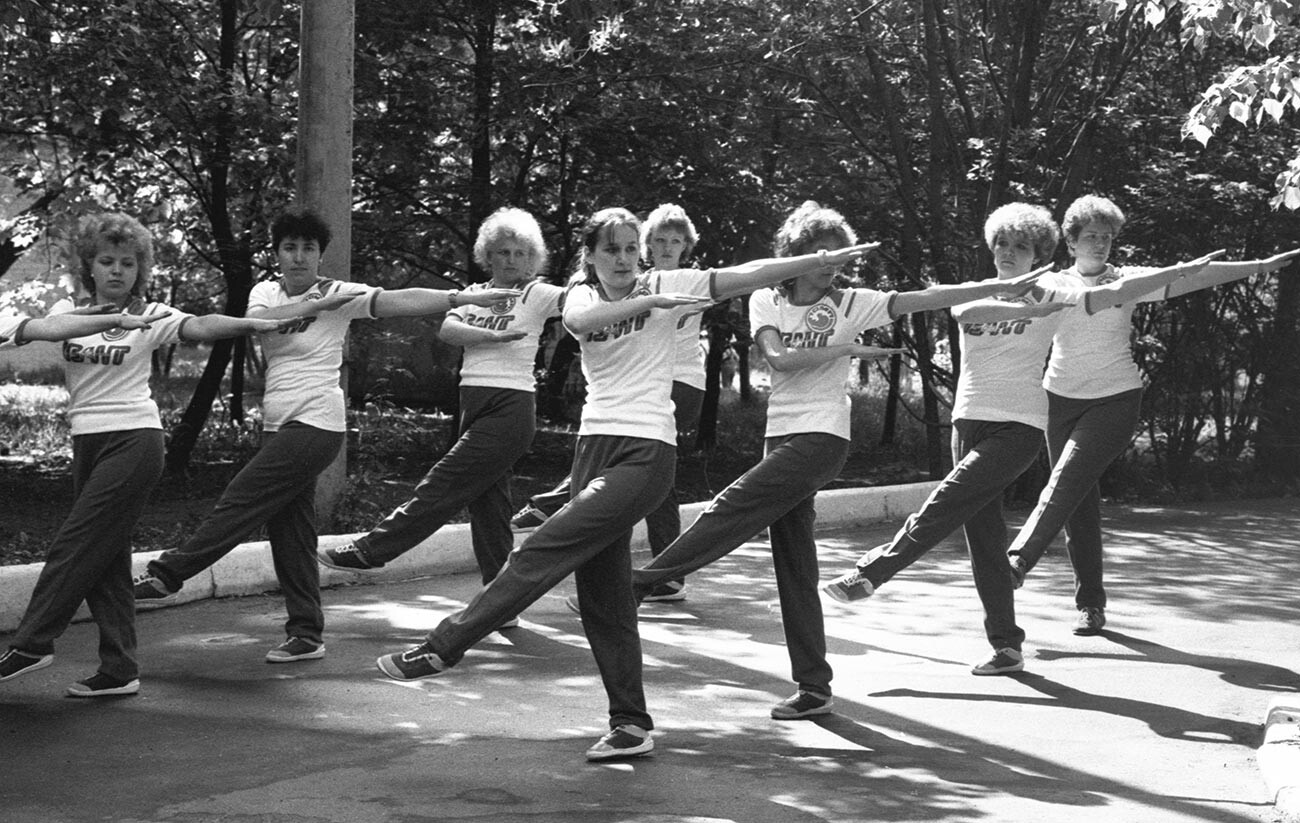 Here's the fitness at work competition in Moscow, 1980s.

During perestroika, gymnastics became formal and ceased with the collapse of the USSR. Nevertheless, some Russian enterprises are trying to revive this tradition.