20 photos that prove the USSR was the sports empire!

Lifestyle
Russia Beyond
Soviet people had to be healthy and fit, because only in this case could they live a long life... in order to work hard in factories and build the utopian communist future, of course.

The new Soviet state established sport and physical culture as one of the main points of its ideology. “A healthy spirit requires a healthy body,” Soviet official Kliment Voroshilov used to say. From childhood, Soviet kids had to do exercises, while physical education classes were obligatory in all schools and universities. Students had to pass special tests to match the special normatives that proved one was “ready for labor and defense”.

1. Medics doing gymnastics with kids in a kindergarten, 1965 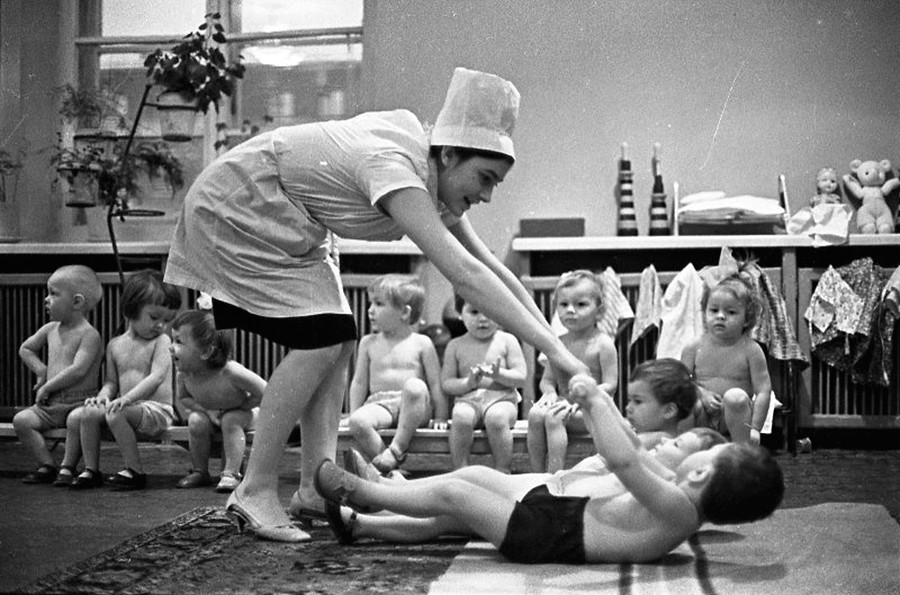 No matter how early you woke up, you would never forget about morning exercises! That was what the Soviet state actively propagandized, especially via posters.

2. Morning exercises as part of the program in all the children camps and resort places, 1936 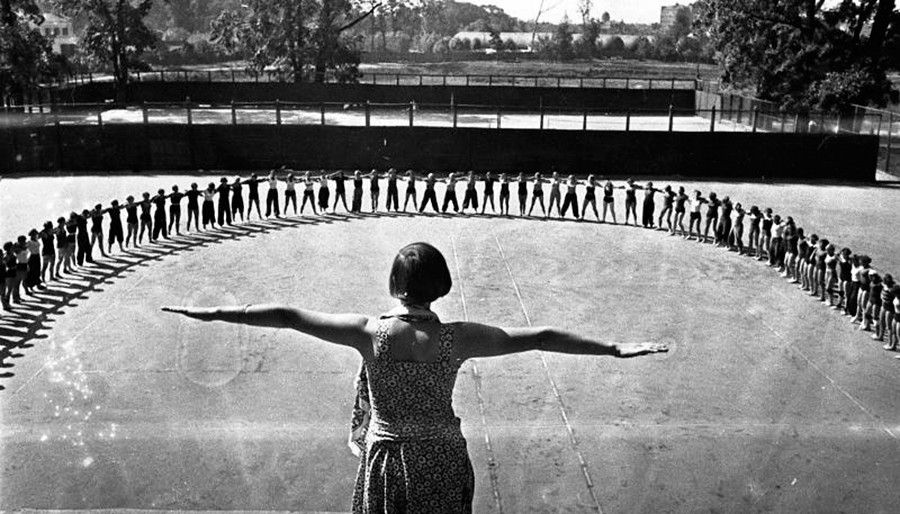 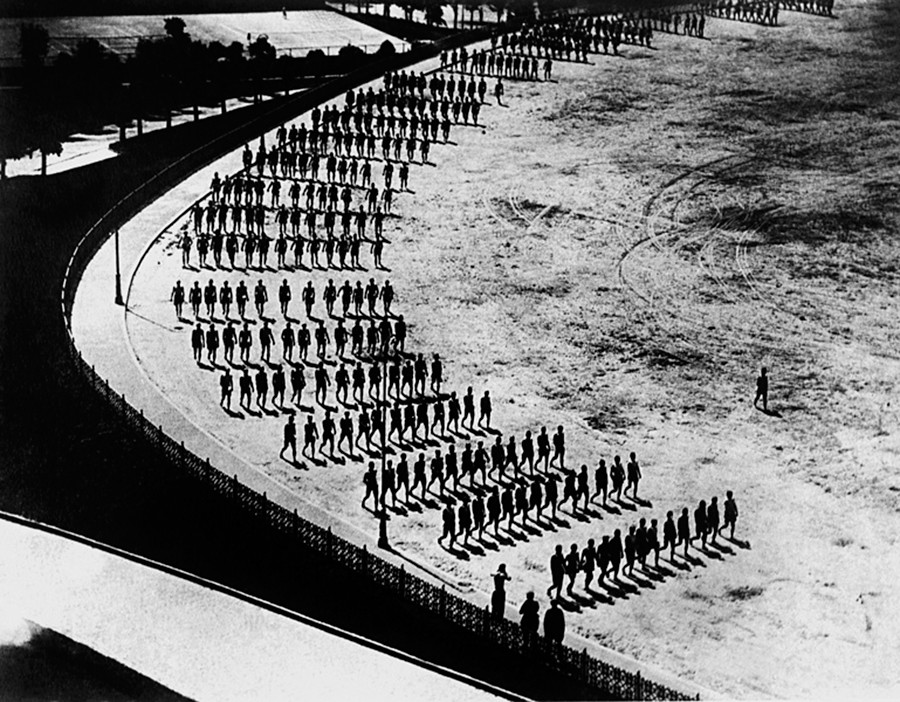 4. Students doing morning exercises on the rooftop of their dorm, 1932 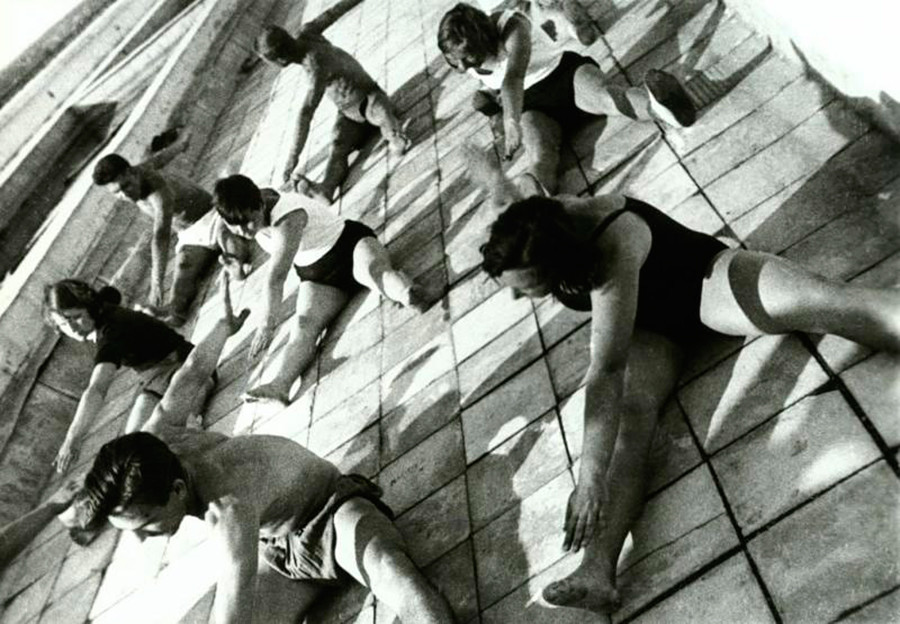 5. Workers at a textile factory limbering up for the day, 1960 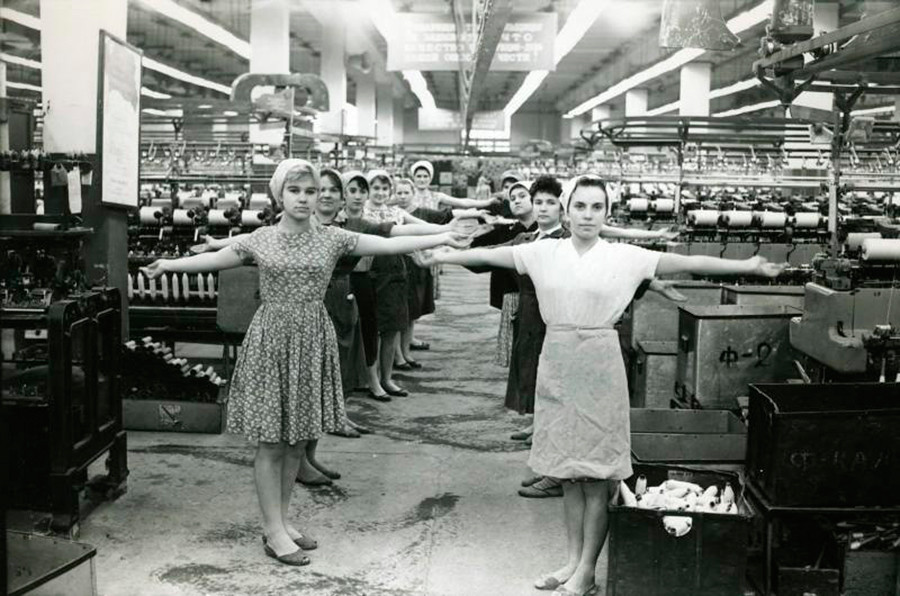 Skiing was one of the obligatory winter sports in schools and became a national sport. 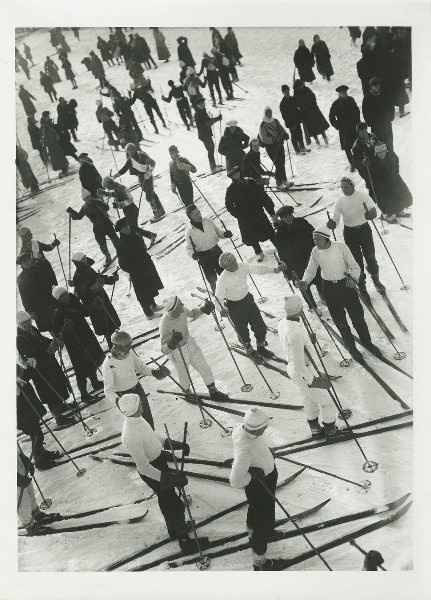 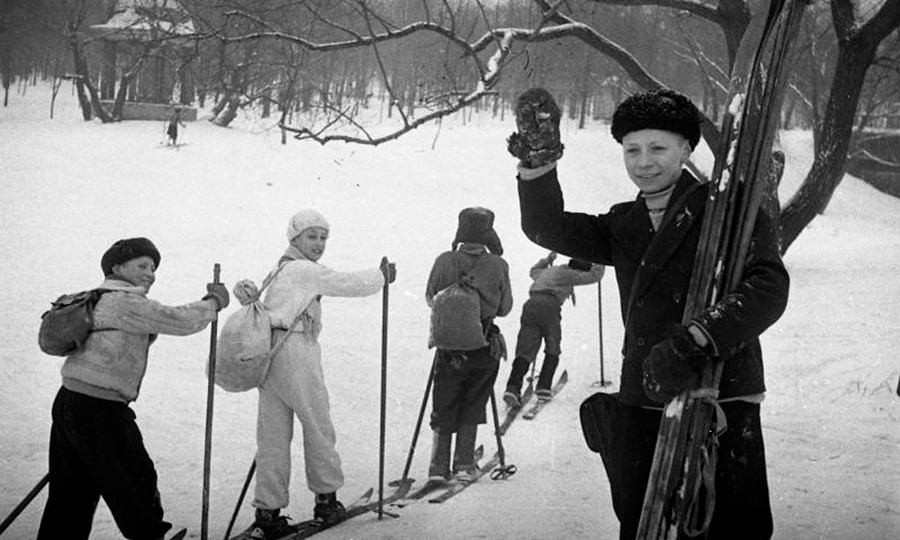 Ice skating was another great love of Soviet people. Are you curious why Russians are so good at skating? Read here. 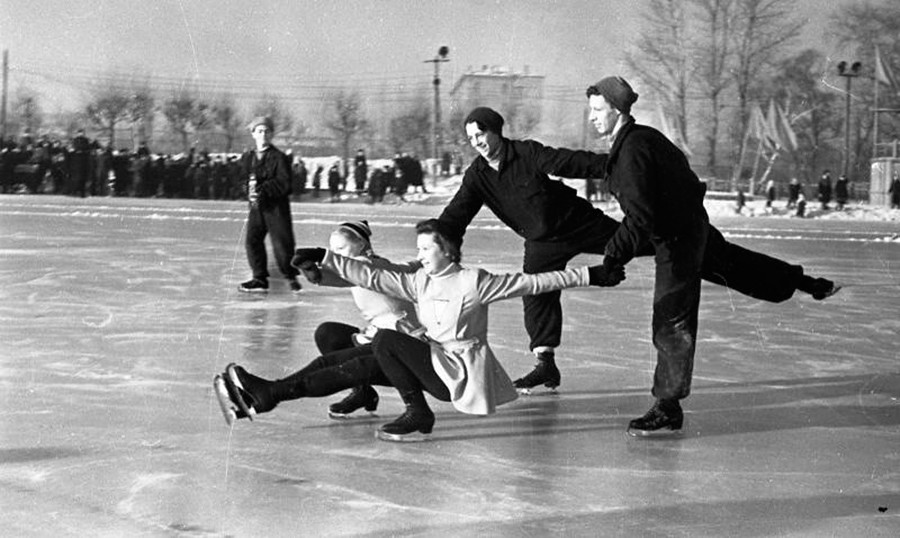 Kids were to foster the competitive spirit, so there were lots of tournaments between schools in different sports: from group disciplines such as football and basketball to running, gymnastics, swimming and winter sports we’ve already mentioned.

9. School kids getting ready to race in a swimming contest, 1946 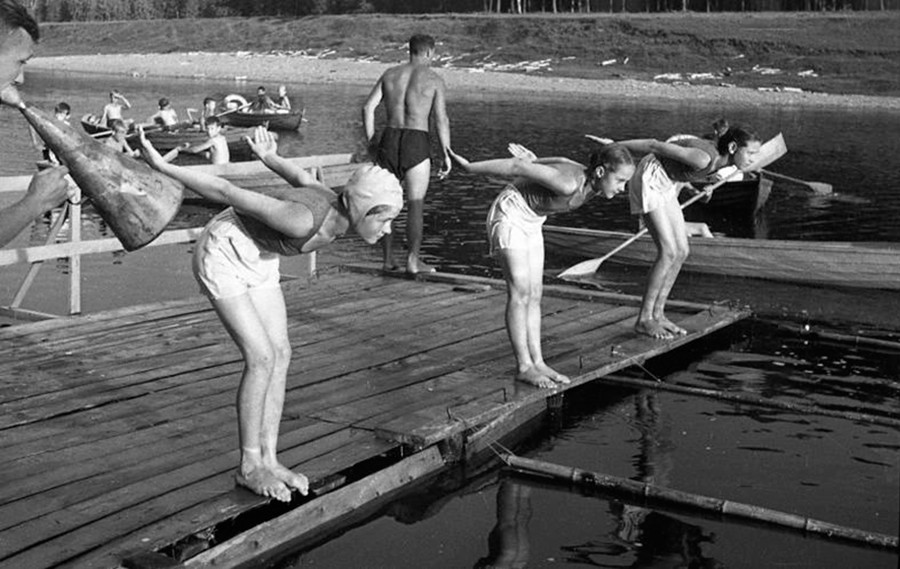 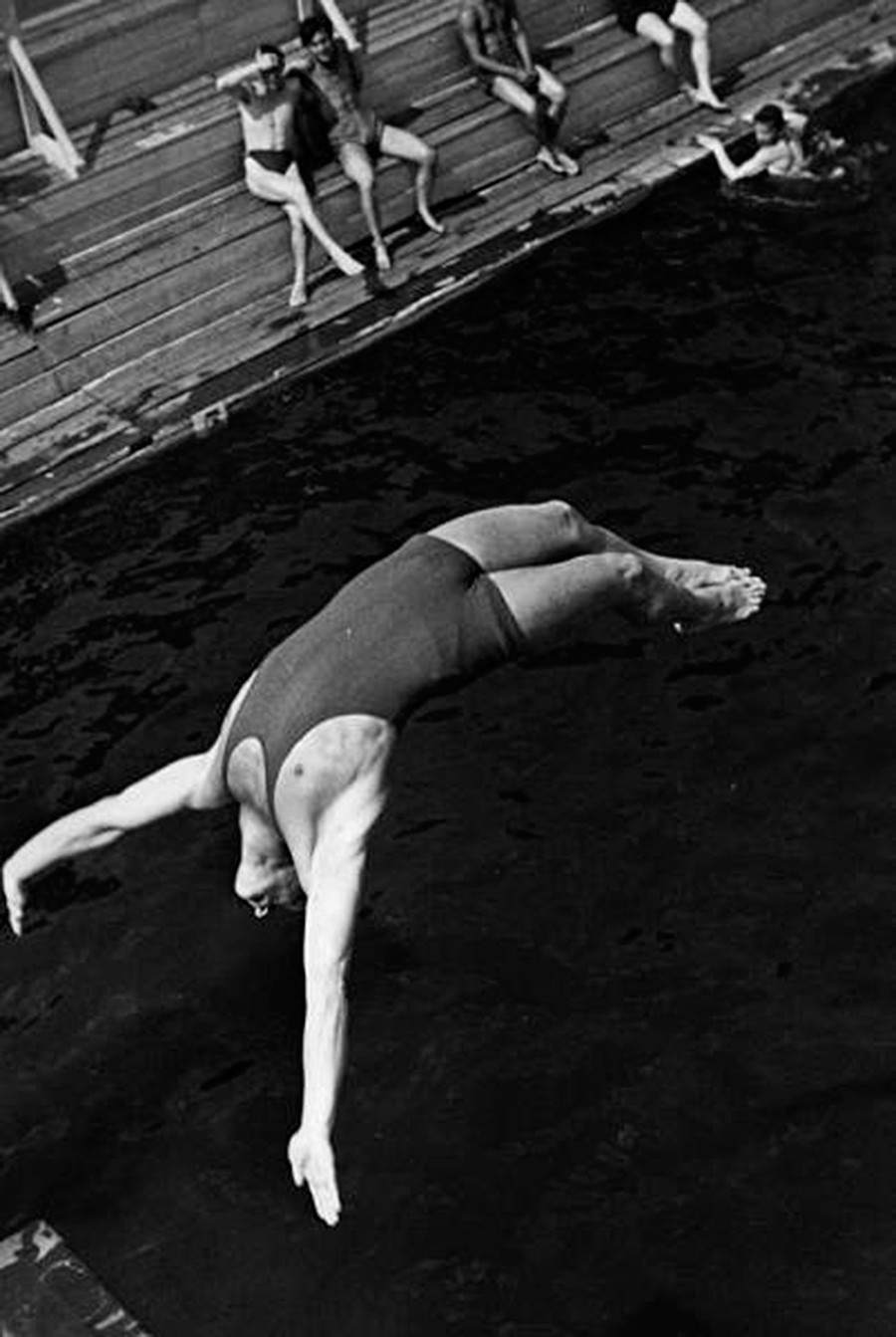 Children had to climb the rope within the school program of physical education, not everyone was keen on this type of exercise. 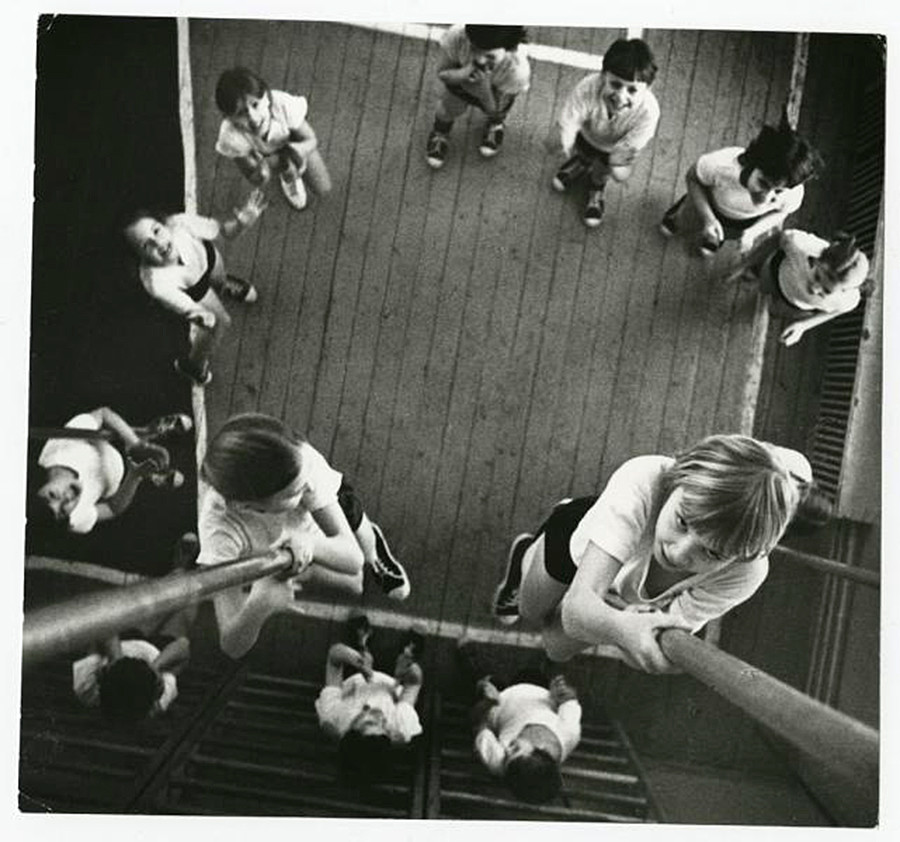 The Soviet state emphasised the importance of artistic gymnastics. School lessons of physical culture included exercises on parallel bars, pommel horse and horizontal bars. While there was a strong training school of the professional gymnasts.

12. A group of young female gymnasts going through their daily training program, 1964 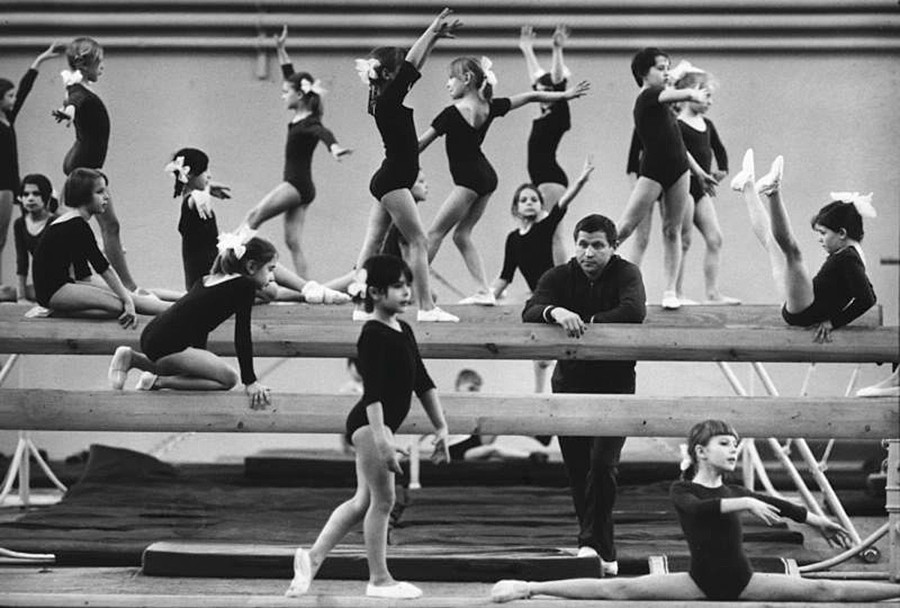 Bar exercises were widespread in the Soviet army and among ordinary men, bars were installed for work out in many Soviet yards. 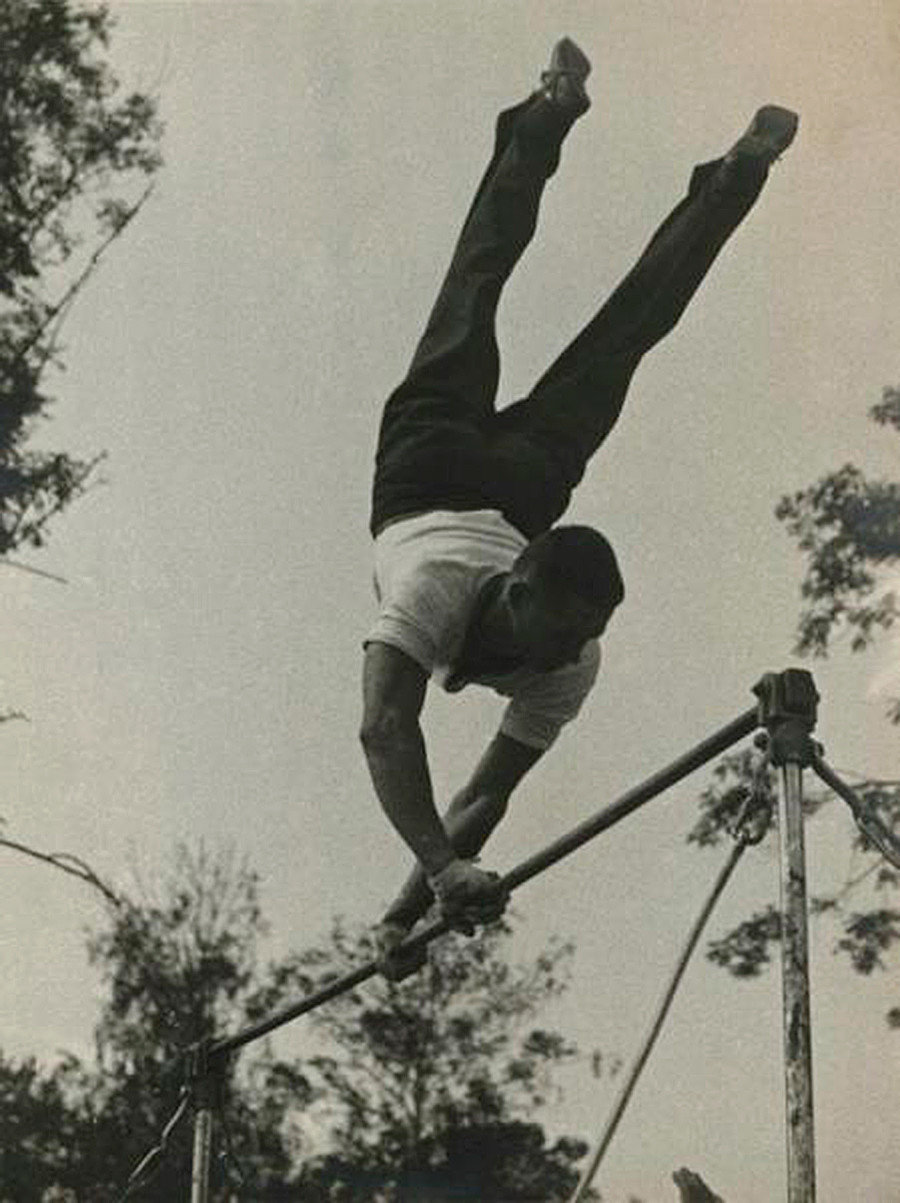 As a part of amateur performances for school kids, forming complicated compositions quickly and synchronously was common. 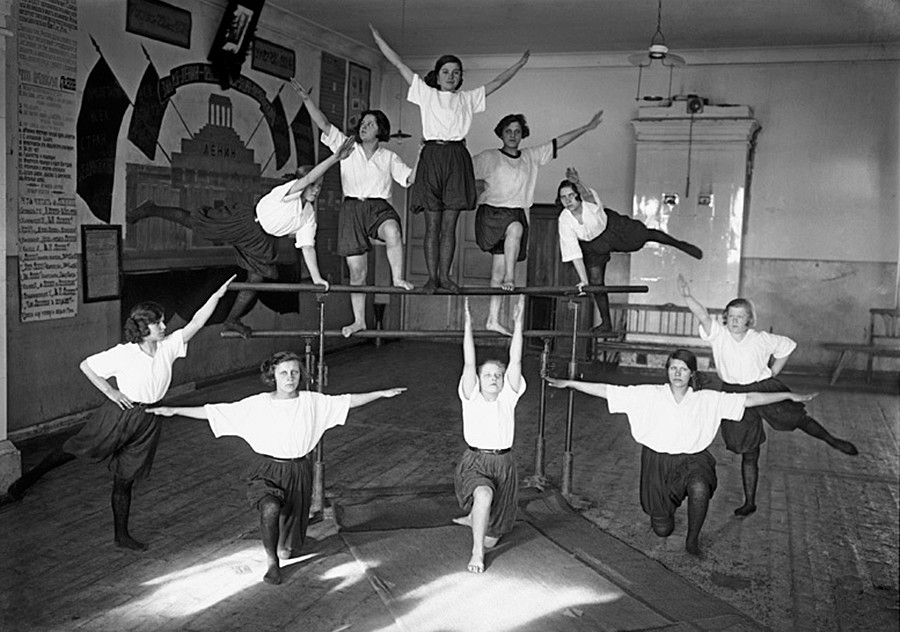 The variety of mass gymnastics etudes was a field of art for Soviet avant garde photographers. 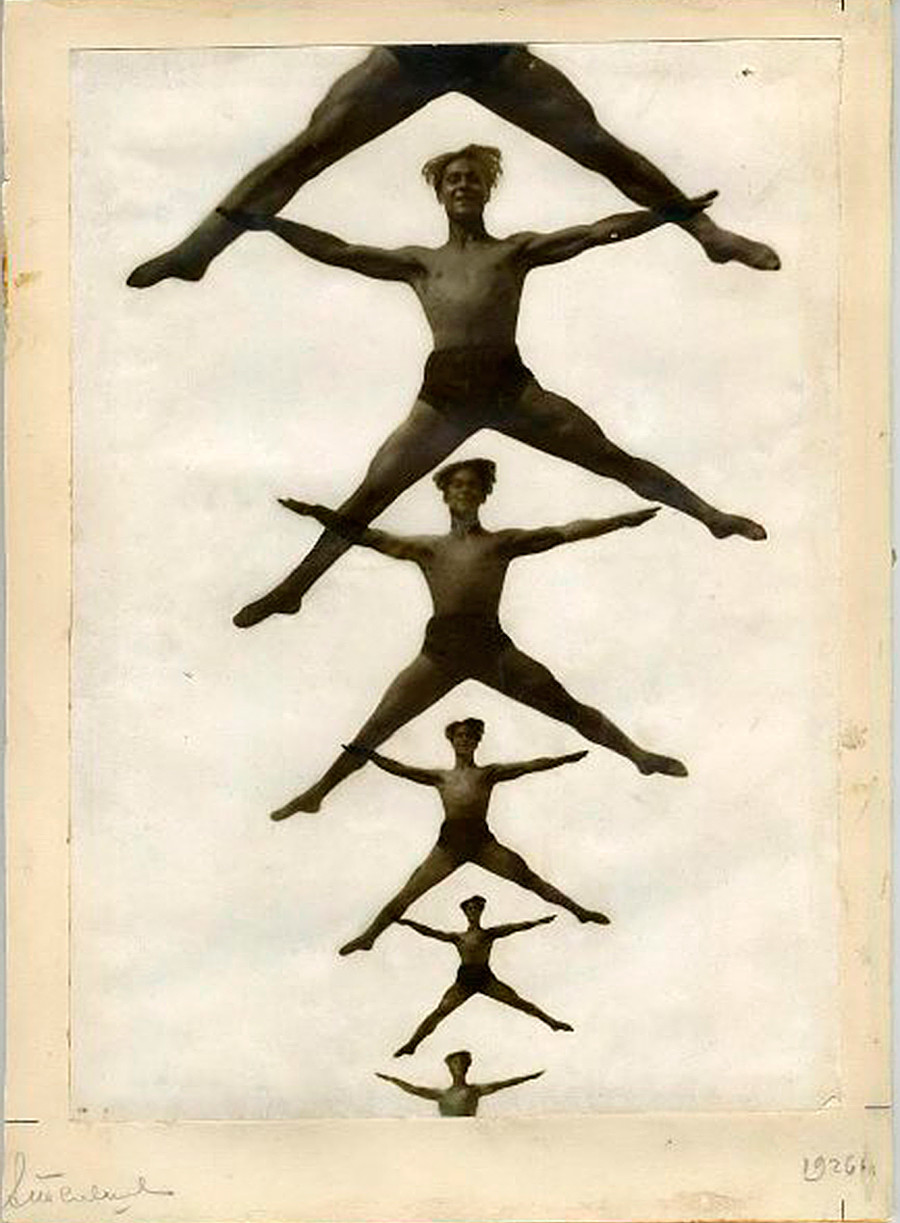 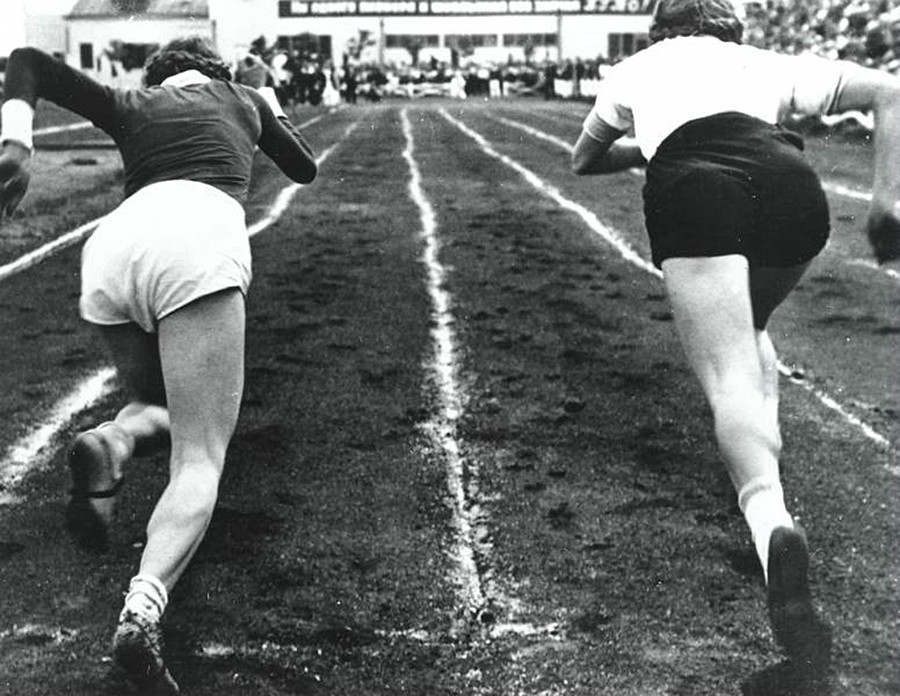 Every year, the Red Square held huge Physical Culture Parades. Athletes marched with flags and banners across the square in front of the Soviet leaders who watched the show from the Lenin’s mausoleum. 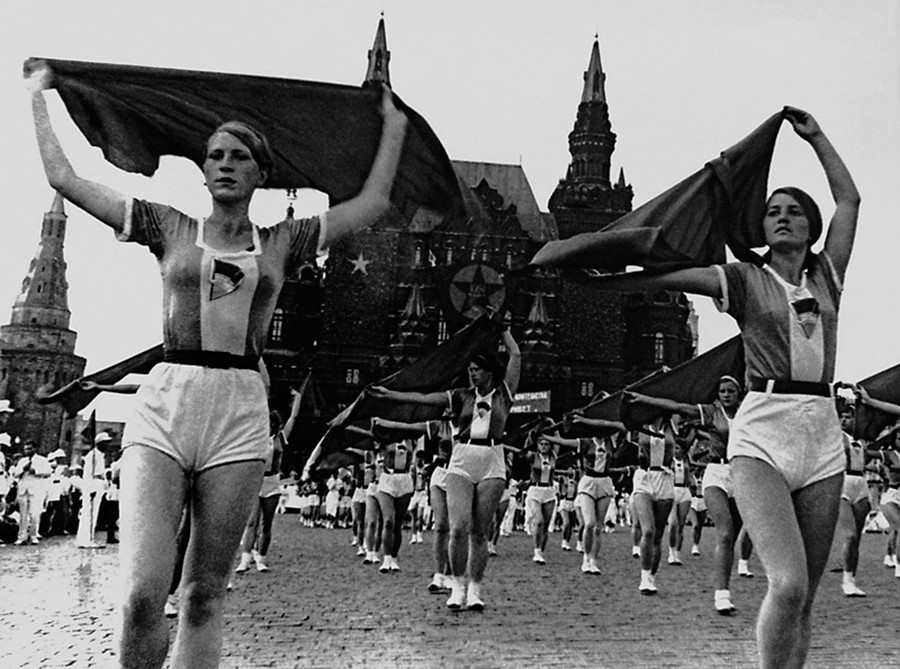 Physical Culture Parades are also known for the complicated figures that participants build from their own bodies. Spectacular - and a hard work was needed to prepare the show, as everything should have been just perfect. 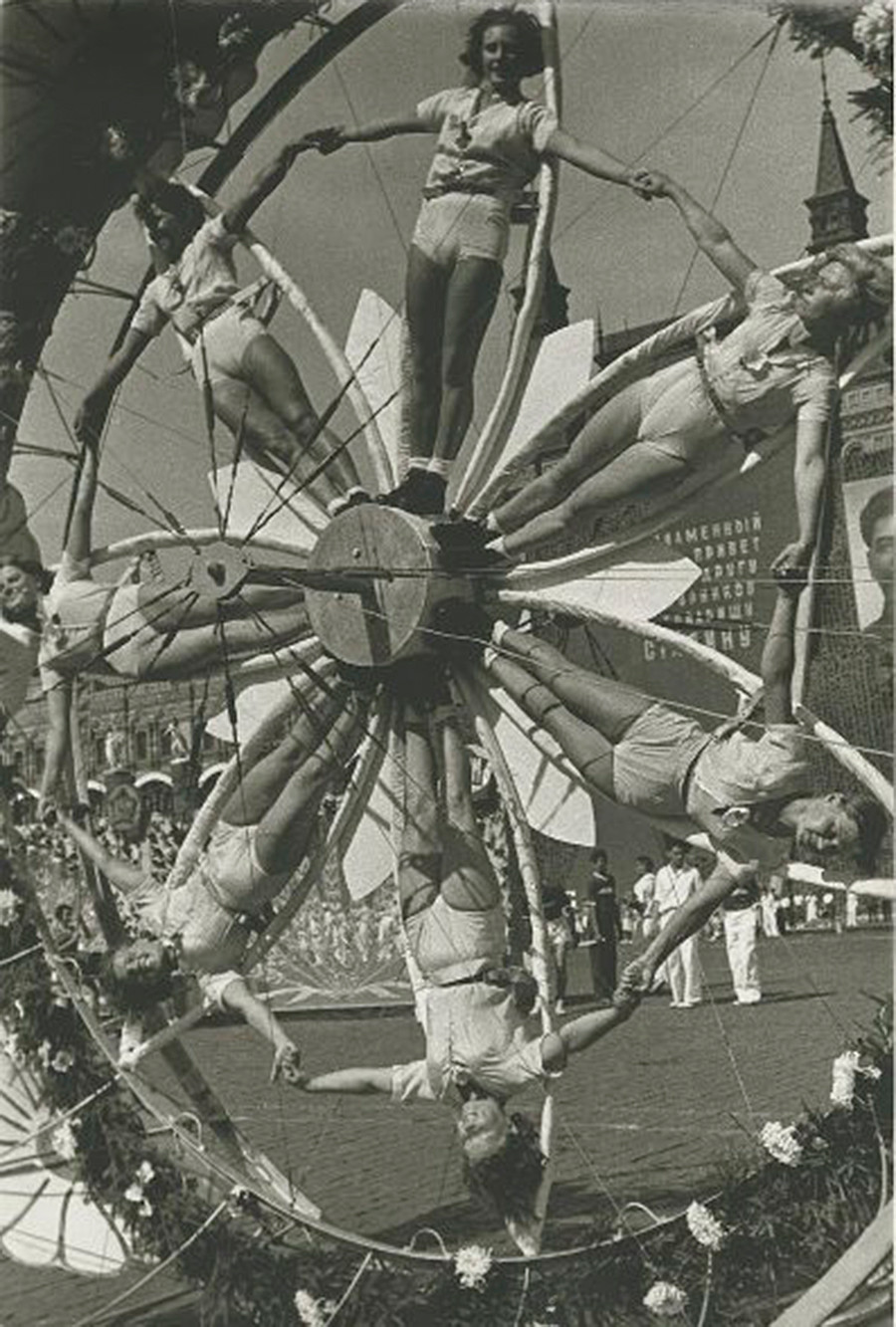 In other words, these parades were spectacular! 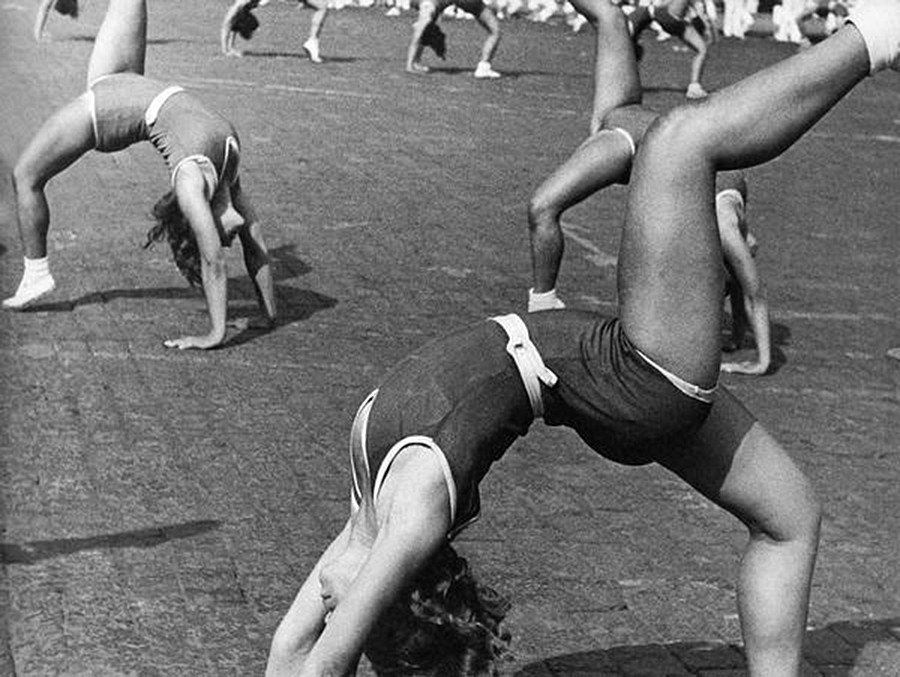 By the way, this is one of the most popular static exercises, in the Soviet Union it was called ‘beryozka’, as a birch tree. 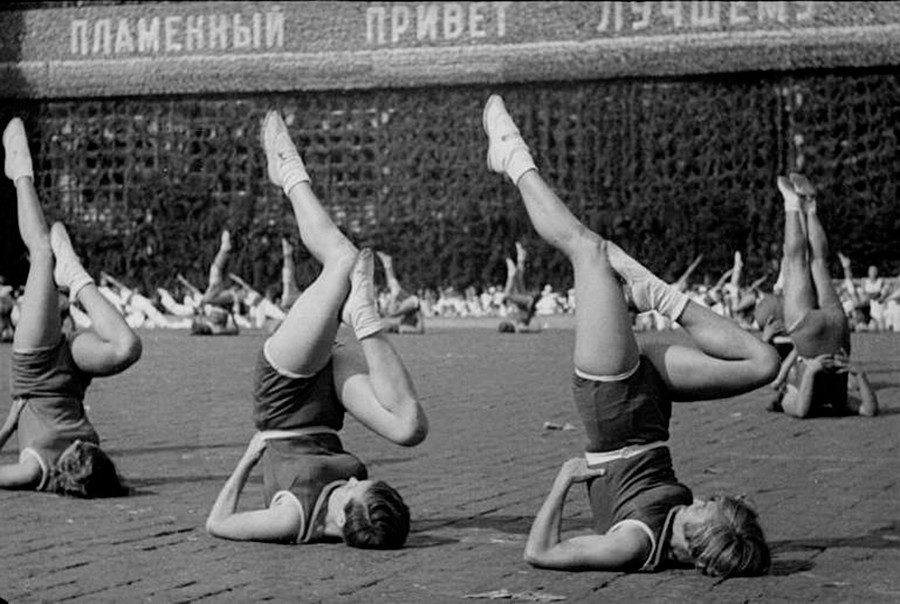