How Swedish Prince Gustav left for Russia – and never returned 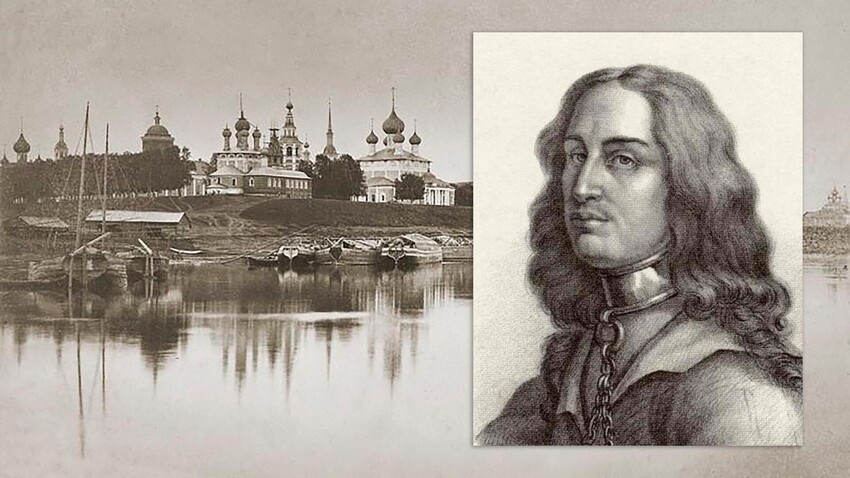 Public Domain
The story had all the makings of a romantic movie: a destitute prince escapes for Russia and looks to marry the tsar's daughter. However, it did not have a happy ending.

“Intoxicated by wine, Gustav threatened to burn down Moscow if they didn’t let him leave Russia… The tsar, angered by this, took away the ignoble Gustav’s treasures and cities and ordered to keep him under guard.”

These were the words Nikolay Karamzin used to describe the downfall of Prince Gustav Eriksson Vasa (1568-1607), who arrived in Russia with the high status of bridegroom to the tsar's daughter, but managed to ruin his entire “career”. But could the reason behind this unfavorable narrative be the fact that the Russians had their own motives for presenting the Swede in a negative light for political gain? 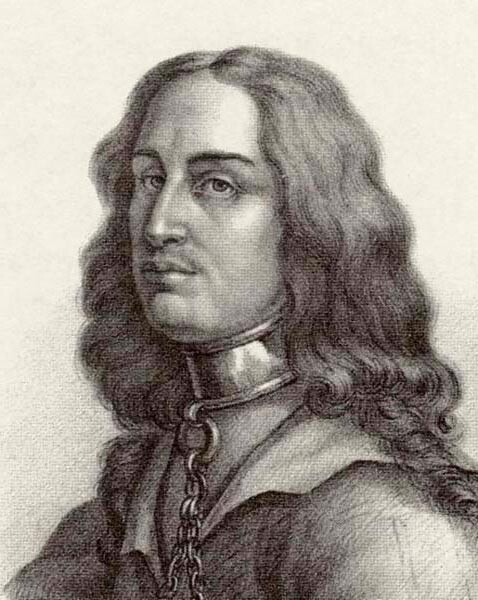 Before arriving in Moscow in August, 1599, Prince Gustav had to change his attire. He’d escaped to the Moscow tsardom – ruled at the time by Boris Godunov – from Poland, fleeing persecution. Moscow sent “several courtiers with German translators, carts, horses and many other princely items, necessary for the road, as well as all manner of provisions”, Dutch grain trader Isaak Massa wrote.

“The princely things” were necessary for the prince to enter Moscow in a manner befitting his status, complete with an entourage. Such attention was natural for Gustav – he could well be a contender to the Swedish throne, despite his questionable origin.

Gustav was the son of King Eric XIV of Sweden and Katarina Monsdotter – a maid, the only native Finn in history to have received a royal title. But, Eric and Katarina’s children were born before Katarina was pronounced queen, which happened in 1568. Therefore, Gustav’s claim to the Swedish throne was dubious at best. Moreover, when Gustav was only six months old, his father Eric was deposed by his brother John III and stripped of all rights to the Swedish throne. 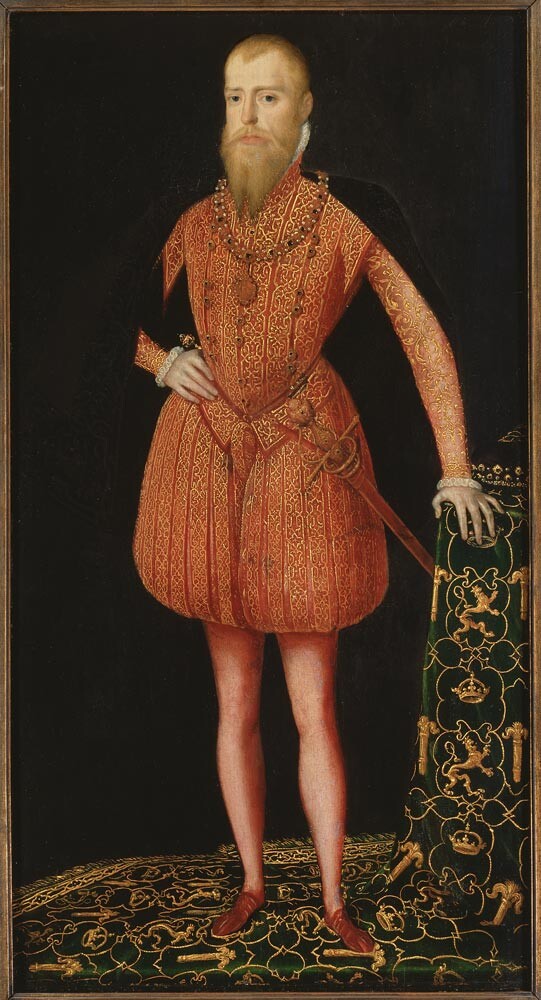 Unhappy adventures had been following Prince Gustav since childhood. The first years of his life were spent under house arrest at Castle Abo in Finland. In 1575, the child was abducted by his uncle’s agents and shipped off to Poland for studies in the Jesuit order. He would not see his mother for the next 20 years.

In that period, Gustav traveled Europe and was, evidently, accumulating knowledge: in 1586, he lived in the court of King Rudolf II, who was a proponent of science. By then, Gustav had, according to Russian author and historian Nikolay Karamzin, “already spoken languages, aside from Swedish and Slavic, including Italian, German and French; he saw a lot of the world, using his curious mind, and had a pleasant way about him.” Russian sources claim that Gustav’s deep knowledge of alchemy earned him the moniker of “second Paracelsus”, which he took pride in even more than his regal roots. 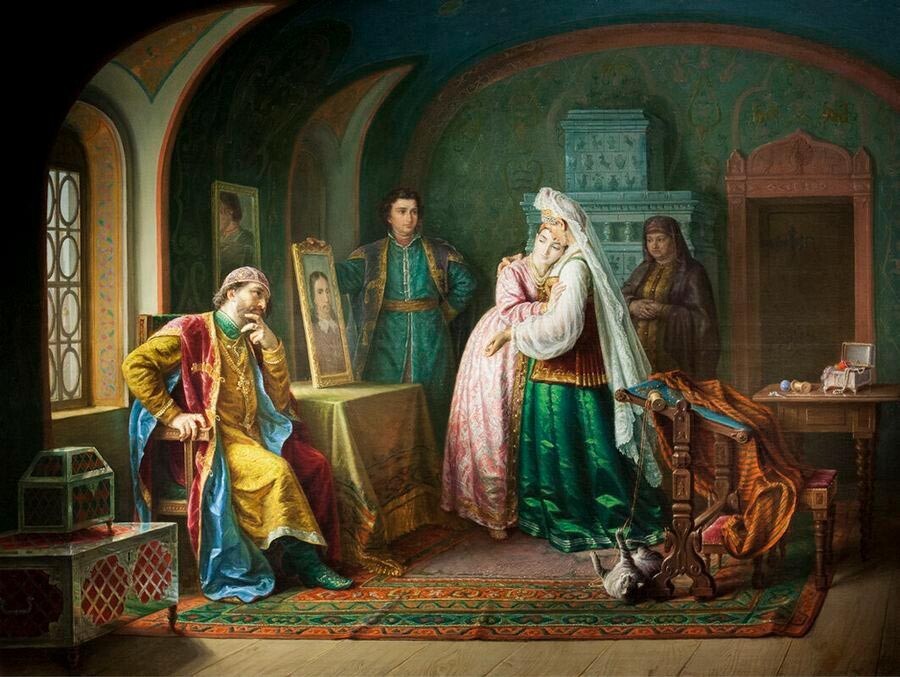 "Boris Godunov shows a portrait of a groom to his daughter," 1876, by Sergey Gribkov

Gustav’s invitation to Moscow, however, revolved entirely around his royal status – if only symbolically, given that he was a bastard. Bringing such a person to Russia, converting them to Orthodox Christianity, marrying them to a blue blood, all with the purpose of having on one’s side a contender for one of Europe’s thrones, could only have been seen as a solid idea from the point of view of a Russian tsar. The prince himself had lived in the Free City of Danzig in Poland in the home of one Christpher Kater. According to Massa, Gustav had started an affair with the landlord’s wife, who even ended up giving birth to several children. But things were going rather badly and Gustav sent a letter to the Russian tsar, announcing his willingness to come to Russia.

Tsar Boris Godunov intended for Gustav to marry his daughter, Princess Kseniya Godunova – then considered the most beautiful woman in the entire Muscovy, as well as having studied under the tutelage of European professors. On August 19, 1599, Prince Gustav arrived in Moscow. “He was greeted with great pomp by nearly all of the nobles, who rode on horseback, wearing lavish clothing; and he was sat on the tsar’s horse and escorted home this way, which was made ready for him, with every amenity having been provided: horses, supplies, provisions, servants and slaves, as though he was a tsar; on top of that, Boris sent expensive gifts, brocade and silk materials to be used for making clothes for him and his entourage,” Massa wrote, describing the grand welcome given to Gustav. 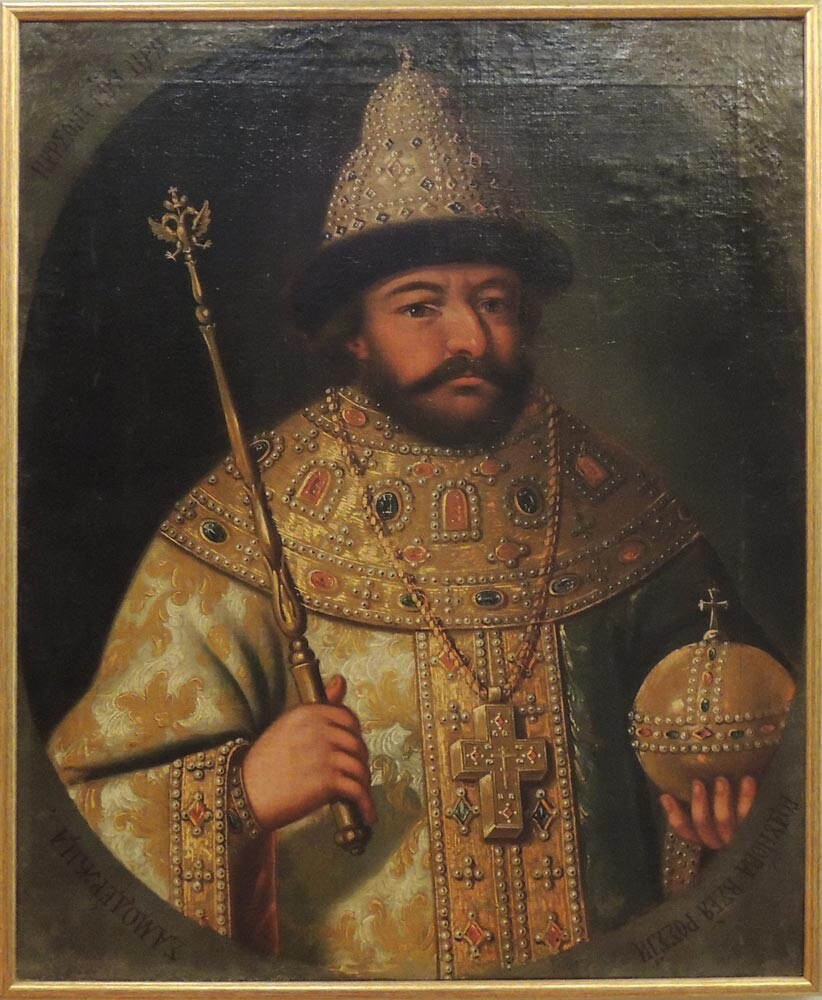 At first, things were going great – Gustav even delivered a speech “in the Slavic language” during the royal function, with “the tsar himself expressing sadness at his plight, promising the Moscow state’s protection”, while also ordering his son Grand Duke Fedor to treat Prince Gustav with the appropriate respect. The latter ended up receiving “the appanage principality of Kaluga, three cities with volosts, for extracting profit” (a ‘volost’ was a traditional Russian administrative subdivision). According to Karamzin, “after marrying into Boris’s family, Gustav became the first man in Russia, gifted and canoodled on a daily basis.”

The attitude was par for the course. Having given away his daughter to Gustav, Tsar Boris had planned on using him as a card in a political game. Employing the rhetoric of “concern for the poor son of a treacherously deposed Swedish king” for pretext, Godunov sought to claim a portion of Sweden’s Baltic lands – modern-day Estonia – and organize a Livonian kingdom there, with Gustav as its king, in exchange for Gustav’s refusal of his claim to the Swedish crown. “What could go wrong with such a brilliant plan?” the tsar’s thinking went. 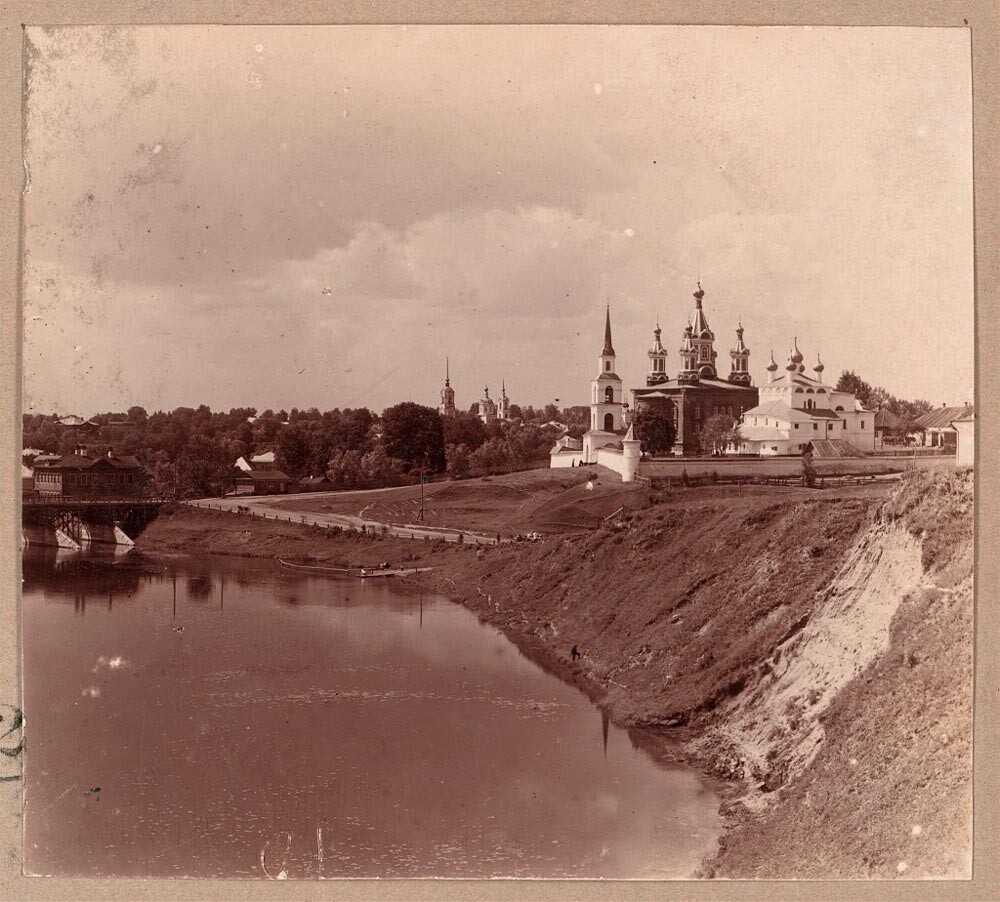 The Dmitrov monastery in Kashin, 1910. / Sergey Prokudin-Gorsky / Library of Congress

Both foreigners who describe Gustav’s predicament in their entries on Muscovy – Dutchman Isaac Massa and German Conrad Bussow – claim that, already before the wedding of Gustav and Kseniya, the prince had suddenly earned the ire of tsar Boris, leading to his exile to the city of Uglich. The Westerners agreed that a woman must have had something to do with that.

According to Massa, having found out that Gustav was living a “prosperous lifestyle” in Moscow, some members of European nobility had arrived to serve him there. This is unlikely to have scared the Godunovs, who were themselves no strangers to European ways. But things had taken a turn for the worse when Gustav invited Christopher Kater and his wife (whom Bussow refers to as “Katerina”) to travel from Danzig.

Massa writes that the woman “made him so arrogant, that he would argue with everyone and often beat his noblemen and servants, as well as the Muscovites around him – so much so that people had begun to think of him as half-mad”. Gustav ordered a carriage to be dispatched for use by his lover, complete with four white horses – a move that would only have been appropriate for a tsar or a tsarina in those days. This was alleged to have been the cause of Gustav’s problems: Godunov was livid, changing his mind about offering his daughter’s hand in marriage and exiling the Swedish prince. Brussow writes that, as a result, while on his deathbed, the prince “complained profusely about his concubine, Katerina, for she had taken such power over him, that he had no strength to leave her and, moreover, valued her counsel more than the tsar’s, which made her the source of all of his woes and ill fate”.

Could the masterplan that involved, at first, the marriage of a tsar’s daughter, followed by the creation of an entire separate kingdom have fallen apart so easily? Bussow, for his part, hints at the notion that things were a little more complicated than that. 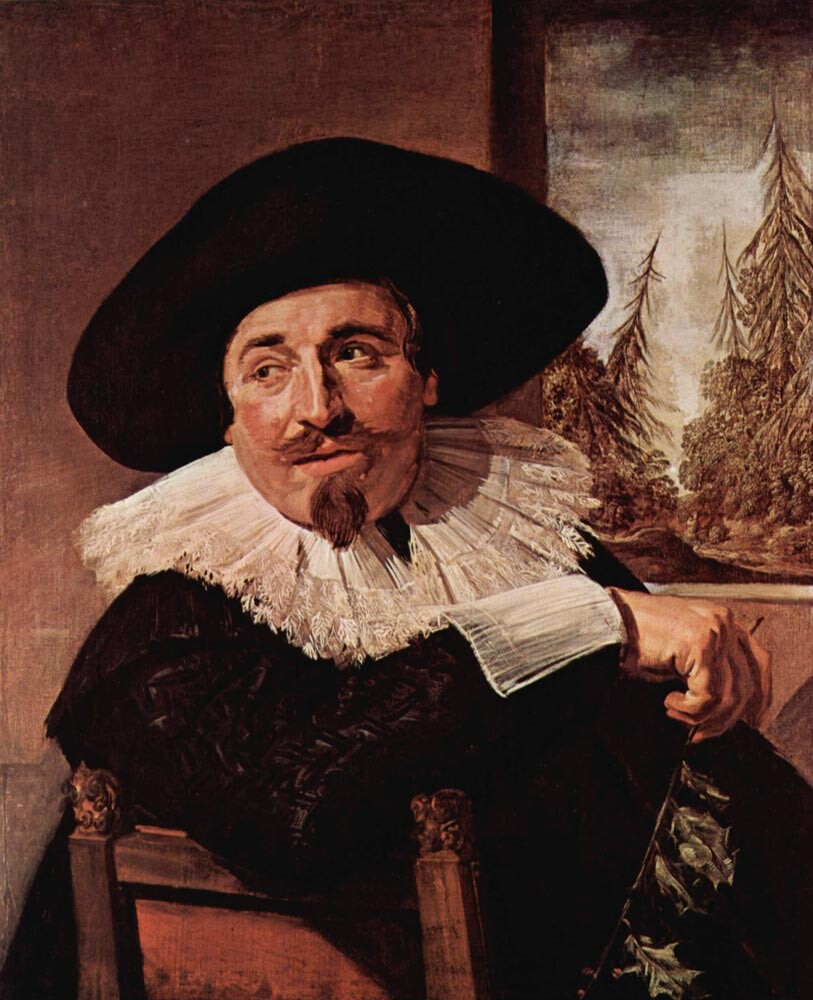 “[Godunov] had provided all his armed forces for him to use against his disloyal Swedes, avenge his troubles and attempt to reclaim his father’s throne. But Duke Gustav did not agree to that, responding that he would rather die himself than risk causing his homeland ruin and taking the lives of thousands of people.” According to Bussow, it was this fact that caused [Gustav] to fall out of favor with the tsar and lose his good graces, resulting in his exile to Uglich.

Massa’s version is a little more “romantic”, alleging Godunov’s continued attempts to appeal to Gustav’s conscience: “[The tsar] ordered to tell him that it was out of order for a king’s son to take another man’s wife for his own, offering her every royal perk, while, on top of that, heeding her advice in every matter; that it would also be prudent for him to refrain from extravagance – and other similar admonitions. Having heard that, the prince, believing that a great injustice was being vested upon him, was quite disconcerted and did not wish to budge on anything.”

Whatever the case may be, the marriage between Gustav and Ksenia was called off, together with Gustav’s conversion to Orthodox Christianity.

The prince was also deprived of Kaluga with its cities, but given ancient Uglich instead, where he’d continued to live as a duke. He was allowed to “build whatever he desired; and he went all out with the extravagance”, Massa writes. “The tsar appointed a nobleman to serve him and supervise his every move, but he lost the woman.” After Vasily Shuisky’s ascension to the Russian throne, Prince Gustav was transferred to the city of Kashin, where he continued to enjoy his privileges. However, history is unclear on one crucial detail: whether Gustav was forcibly prevented from leaving Russia or whether he simply did not wish to return to the life of wandering exile in Europe. He died in Kashin in 1607 and was buried “in the beautiful birch grove, on the shores of the Kashinka”.

By the arrival of the 19th century, the very existence of Katerina (or Brita Persdotter Karth, as she is named in Swedish sources) was beginning to be doubted. She was allegedly made up by the Swedish baron Adolf Ludvig Stierneld (1755-1935), in order to justify his blood ties to the Swedish Royal family. The baron claimed he was the descendant of Gustav and Katerina’s elder son, Lars. Serving as proof of this was an old manuscript that Baron Stierneld had allegedly falsified.

It stands to reason, therefore, that the version that claimed that Gustav was simply an honest scientist who did not wish to go to war against Sweden might have more basis in reality. But then, where did the narrative about the lover, so convincingly propagated by Massa and Bussow, come from? Well, we should not forget that both of the memoirists had arrived in Russia after the prince was already exiled and that their retelling of these events was likely reconstructed from information they must have received from their Russian contemporaries. The latter, of course, would have found it advantageous to portray the prince as some drunkard and madman, rather than a hero and a patriot, who refused “half a kingdom” that he would have received as husband to a tsar’s daughter.