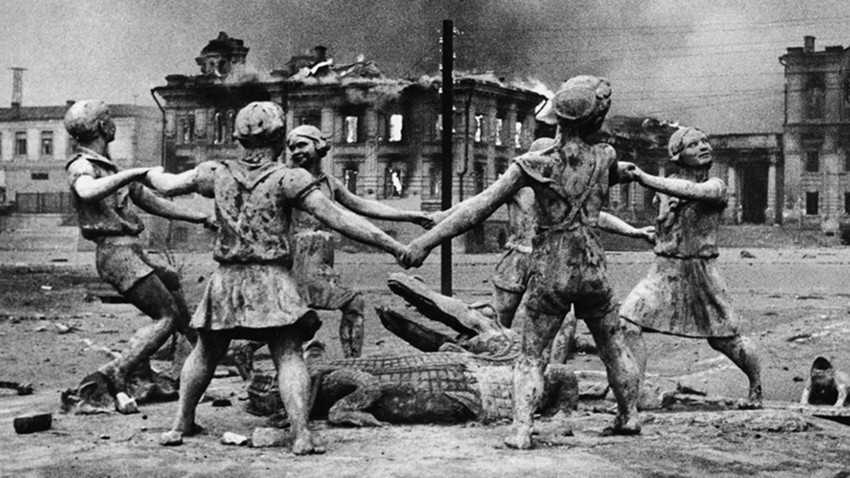 Emmanuil Evzerikhin/МАММ/МDF/russiainphoto.ru
Among the numerous disastrous and harsh events in Russian history, there were prolonged periods of truly dreadful events that affected most of the Russian people and had a long-lasting negative impact on life. We’ve chosen 5 of them. 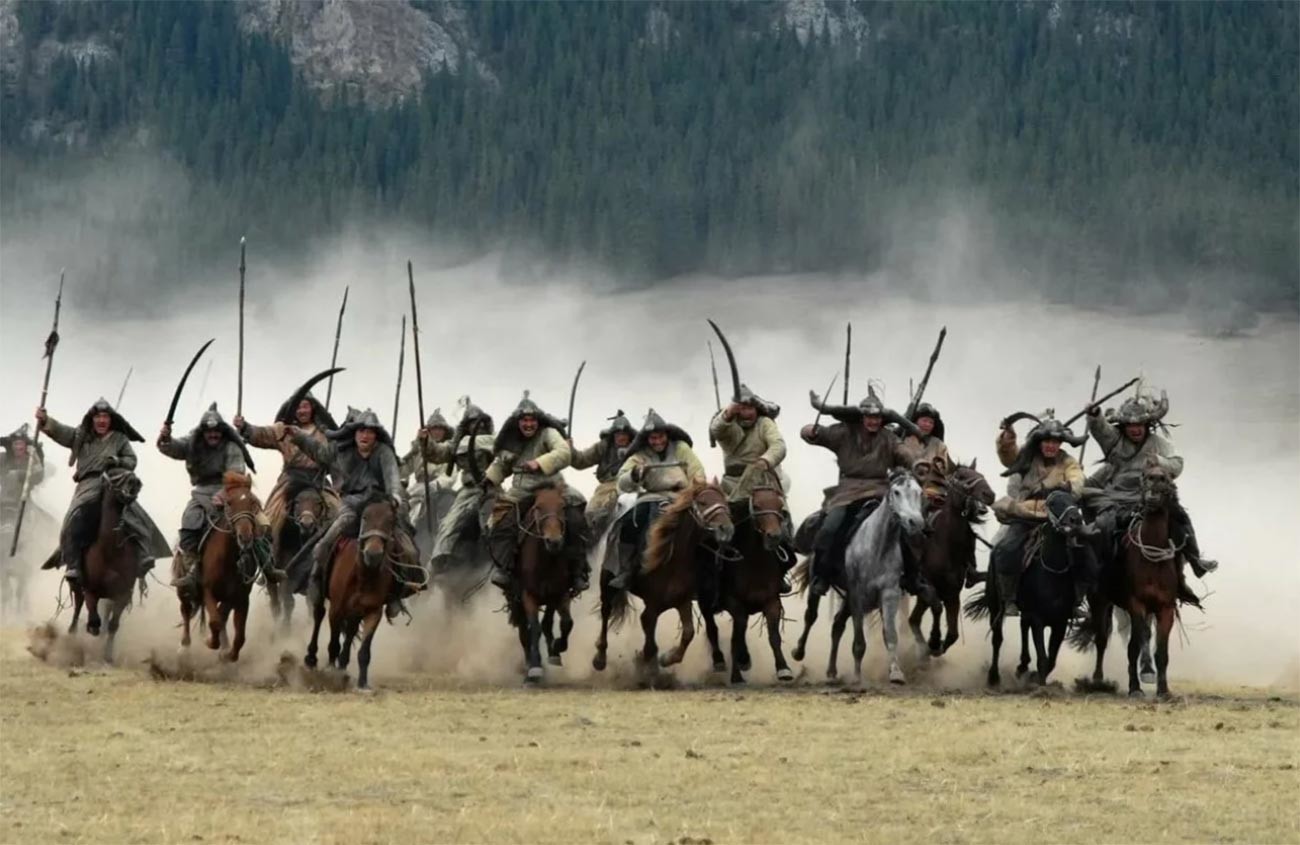 In the early 13th century, Genghis Khan, the almighty ruler of the Mongol Empire, sent his sons to conquer the Northern lands. In 1223, the Mongols first met with the army of Russian princes at the Battle of Kalka and crushed them. In 1236, already after Genghis Khan’s death, his grandson Batu Khan led a devastating onslaught on the Russian lands that lasted for just 5 years, but it was 5 years of terror and destruction.

The tactic of the Mongols was totally unexpected for Russians: devastation. They didn’t fight for glory and prowess, they simply destroyed the people so that they couldn't revolt against them – coming from all directions in small regiments, they burned villages and towns, plundered the fields and stole herds of cattle. Although the Russian warriors were probably larger in number than the Mongol army, they couldn’t effectively unite and were defeated.

The Mongol invasion crushed the Russian duchies and towns. The culture of pre-Mongol Rus’ was almost completely destroyed. Kiev, Rostov, Galich, Chernigov, Ryazan’ and other centers of Rus’ were razed to the ground. Before the Mongols came, there were about 1,000 strongholds and towns in Rus’ – after the invasion, only about 300 were left. Kiev, now controlled by the Mongols, lost its meaning as the main Russian city of the era, and the political life of the land restarted in Vladimir-Suzdal Rus’, which suffered less. It took the Russian lands more than a hundred years to recuperate after the devastating invasion.

READ MORE: The Mongol invasion was the reason Russia formed 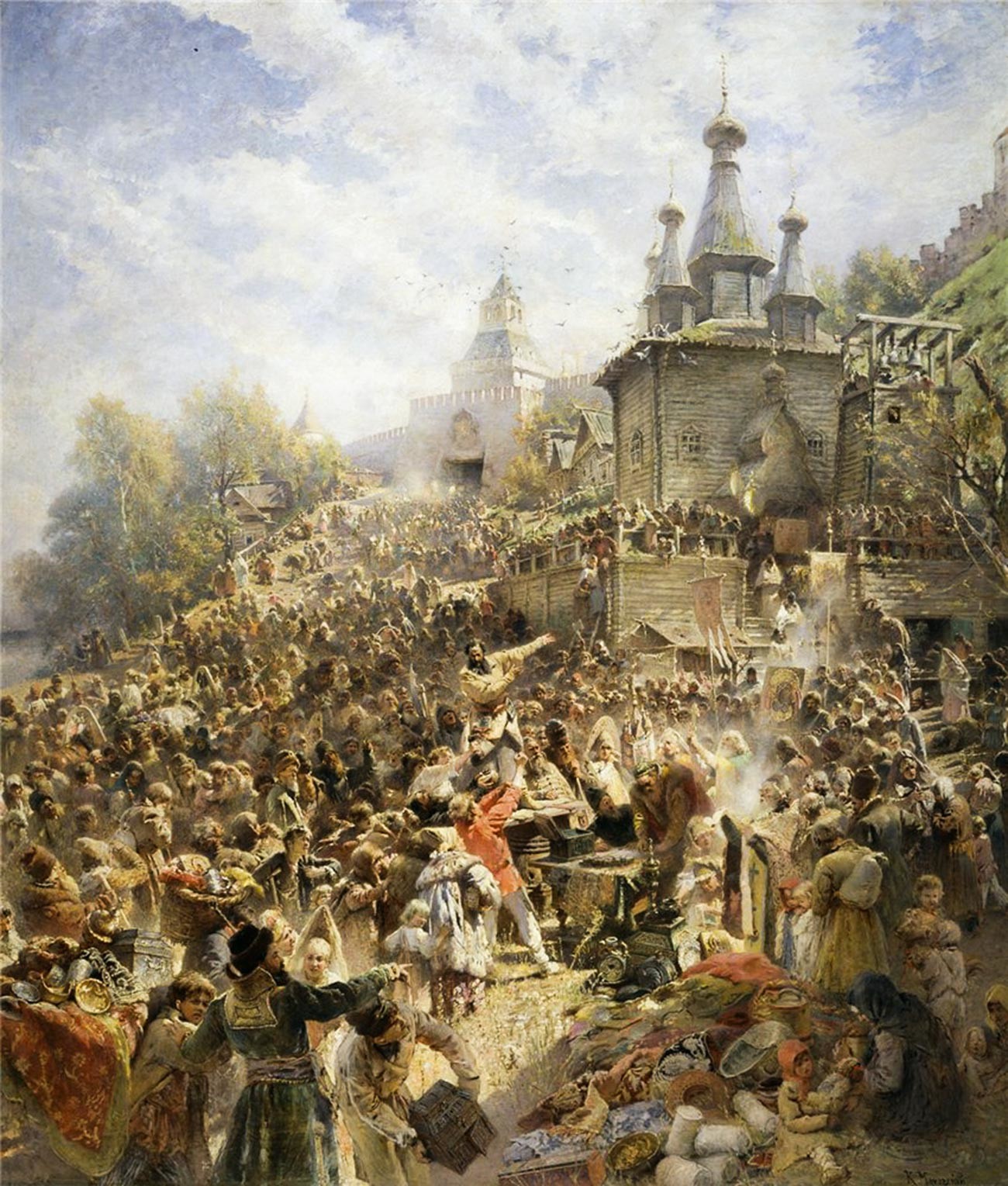 This dark period wasn’t caused by attack or menace from outside, but it was a combination of misfortune, war, and bad politics that led to the Times of Troubles.. They lasted for 15 years from 1598 to 1613, but their consequences lasted until the 1640s. The main reason for the Time of Troubles was the ending of the Rurikid dynasty – Ivan the Terrible’s son Fyodor (1557-1598) had no children, and the last son of Ivan the Terrible, Dmitry of Uglich (1582-1591) died or was killed under mysterious circumstances. No lawful heir to the throne was left, and Boris Godunov, brother of Tsar Fyodor’s wife, took the throne.

During the last years of Ivan the Terrible and the reign of Fyodor, serfdom became systemic in Russia, tying the peasants to the land and increasing social distress. But serfdom didn’t save Russians from the Great Famine of 1601-1603. The famine probably came about because of the eruption of the Huaynaputina volcano in Peru, which caused a volcanic winter. The agricultural cycle was disrupted, and in Russia, it was especially severe, because Russians had insufficient food storages: the Livonian War (1558-1583) that Moscow largely lost, had emptied state coffers.

Huge numbers of peasants fled their masters and turned to robbing and looting on the roads and in forests. In Moscow alone, more than 127,000 died of famine. Peasant revolts started to happen. In 1605, Boris Godunov died, and power in Russia was taken by False Dmitry I (?-1606), an impersonator of Dmitry of Uglich. This impersonator was soon killed, and by that moment, the Time of Troubles was in full flow.

READ MORE: 5 times Russia could have ceased to exist

A peasant war raged across the country, a largely illegitimate tsar Vasiliy Shuisky was on the throne, another Dmitry impostor appeared… In the midst of all this, the Polish-Lithuanian Commonwealth invaded Russia and took Moscow. It was only in 1612-1613, after a decade of chaos, that the Russian people formed a home guard that ousted the Poles from the Moscow Kremlin. Kuzma Minin and Prince Dmitry Pozharsky, the leaders of the home guard, helped restore the monarchy in Russia. The Romanov dynasty was now on the Russian throne.

The Time of Troubles cost Russia about a quarter of its population. Arable land decreased sharply, but what is worse, a new generation of peasants that has been born during these years didn’t know how to cultivate land properly. By the mid-17th century, the Russian population hadn't yet returned to the levels of the 16th century, when another disaster happened... 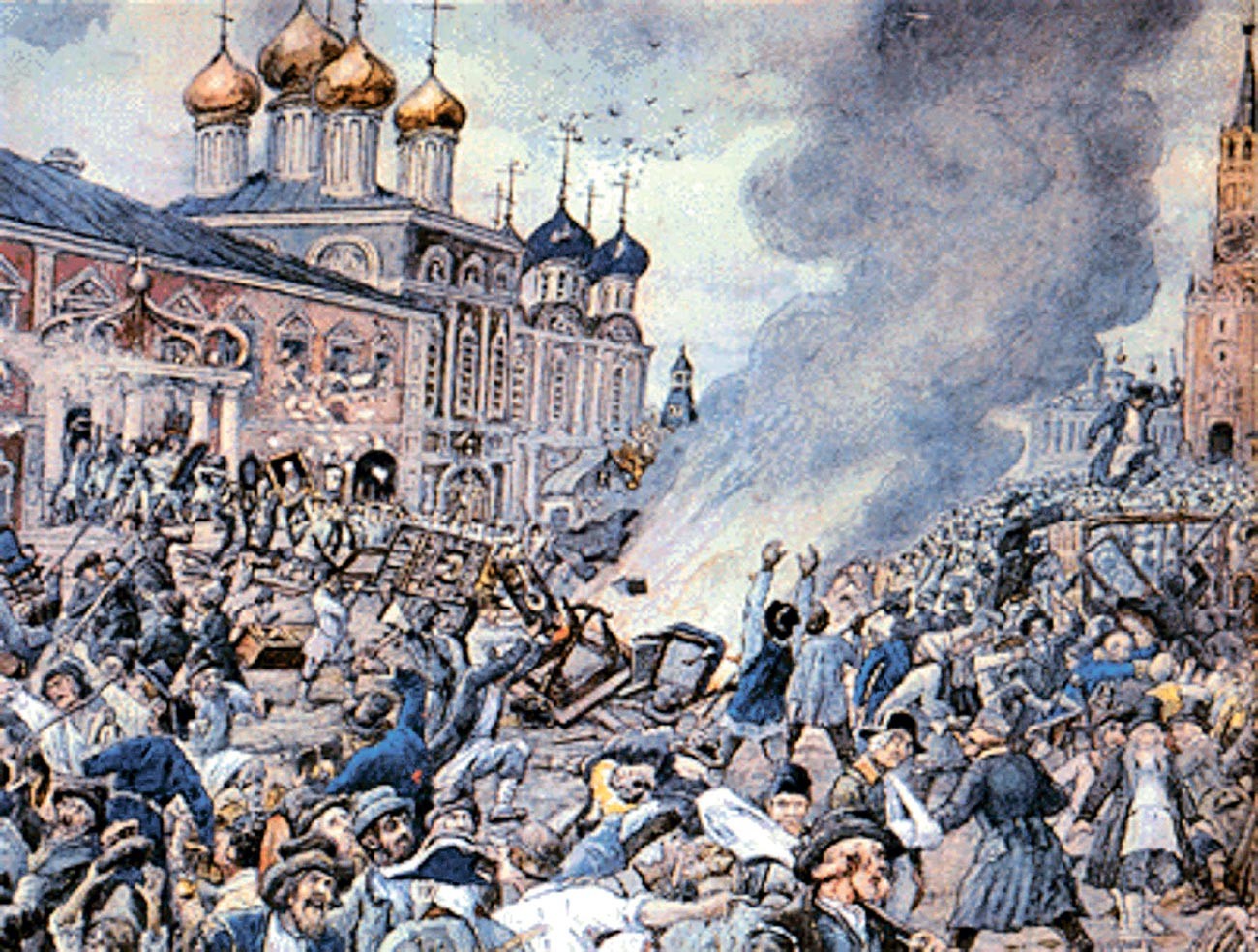 In 1653, a controversial church reform (The Raskol) was initiated by Patriarch Nikon, which was followed by some “apocalyptic” events: in 1654, a plague epidemic struck Central Russia. Because it was the first time Russians had faced a mass epidemic, they were not prepared at all. Tsar Alexey Mikhailovich, the highest military leaders, and the army survived by sheer chance – they were all at war with the Polish-Lithuanian Commonwealth, and the Tsar’s family was quickly evacuated from Moscow.

Moscow was deserted – most of the population either fled or died during the Plague. The fleeing Muscovites took the plague to other cities and towns in Central Russia. Historians believe up to 800,000 people may have died in 1653-1654.

Moreover, on August 12, 1654, a solar eclipse happened in broad daylight, clearly visible, and it was taken as the darkest omen of the epoch. Even Patriarch Nikon and the Tsar themselves were in total terror. After the Plague ended, Russians still suffered its consequences like famine and ill economy. On the other hand, Russians gained experience in fighting and preventing mass diseases.

4. The Three Revolutions, WWI and the Civil War: The annihilation of the Russian Empire 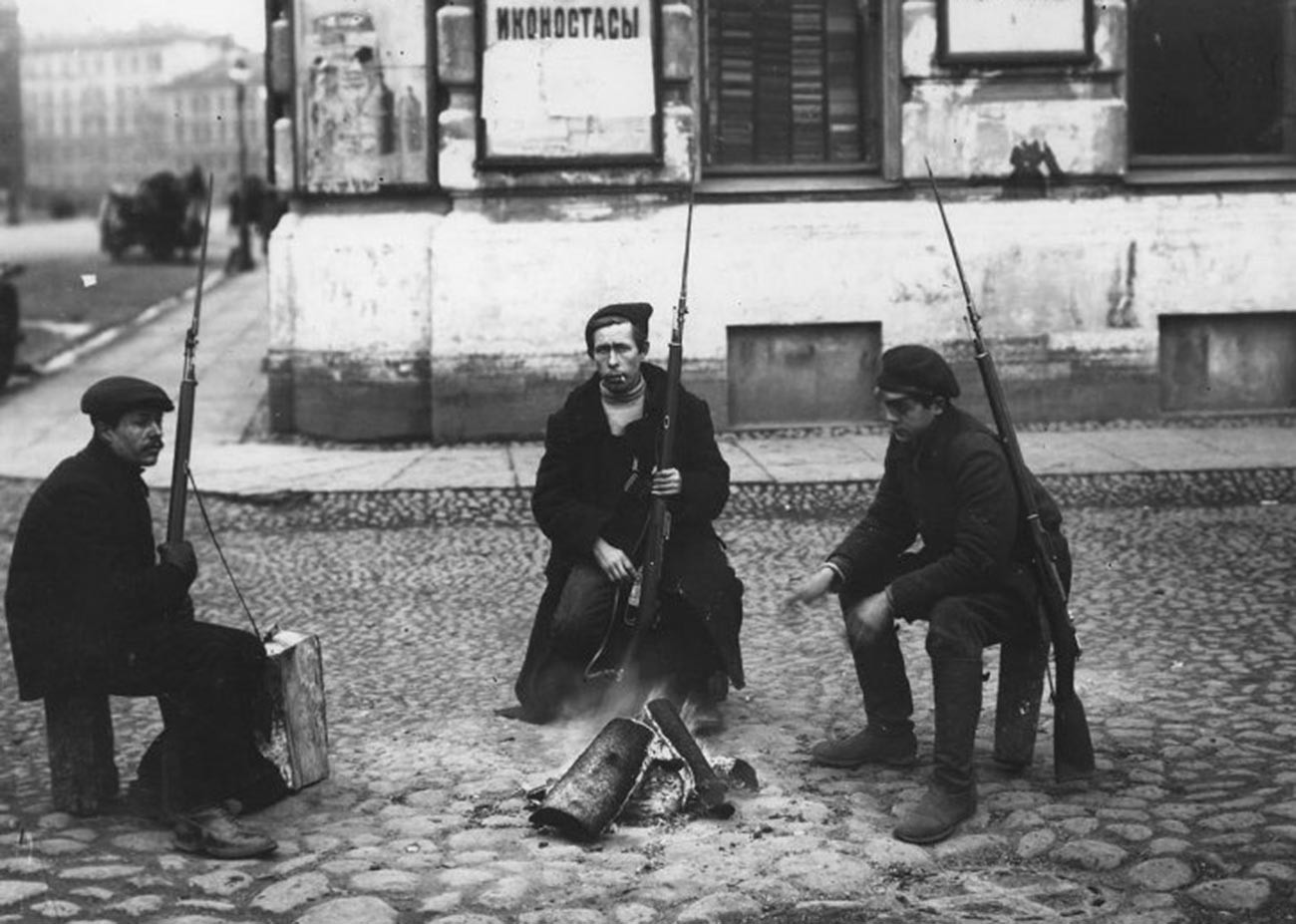 Even the hard reforms of Peter the Great, that turned the lives of Russians upside down, or the Great Patriotic War of 1812, which employed the energy of nearly all the nation in order to defeat the Great Army of Napoleon, didn’t come close to the disaster that happened in Russia under the reign of Nicholas II, probably the most unlucky tsar of the entire Romanov dynasty.

When Nicholas's reign started with the tragedy at Khodynka, many saw this as a dark sign. But Nicholas’s inscrutable policy lead him to the War with Japan in 1905, which triggered the First Russian Revolution of 1905, which in its turn altered the regime in Russia – the State Duma, the first parliament in Russia, appeared, but the Tsar soon made all its decisions ineffective without his own personal confirmation – which rendered the Duma useless!

READ MORE: Why the Russian Empire faced 3 revolutions in 10 years

After the 1905 events, slow-burning revolutionary activity never ceased in Russia. Vladimir Lenin, Joseph Stalin, and many other future Bolsheviks set themselves to overthrowing the Tsarist government, which foolishly continued its militaristic policy. The First World War, for which the Russian Imperial Army was totally unprepared, ignited the Revolution of February 1917, followed by the October Revolution of 1917, which brought the Bolsheviks to power. After that, the state structure had to be rebuilt almost from scratch and with little human resources.

Russia, its population split between the Bolshevik and Monarchist regimes, fell into the chaos of the Civil War (1917-1923) that took the lives of about 11 million, and caused another two million to flee the country. Gross domestic product dropped five-fold. The situation was exacerbated by mass infectious diseases: in 1918-1920, about 25 million people contracted typhus fever, there were outbursts of cholera and dysentery, the country was also affected by the pandemic of the Spanish Flu in 1918, and another Great Famine in 1921-1922... Seems like utter hell, and it apparently was so. The exact numbers of Russians who perished during this period cannot be estimated.

What’s worse is that the country became filled with homeless, parentless children – fertile soil for monstrous criminalization of the population that followed in the 1920s-1930s.

5. The Stalin regime and WWII: The deadliest epoch of Russian history 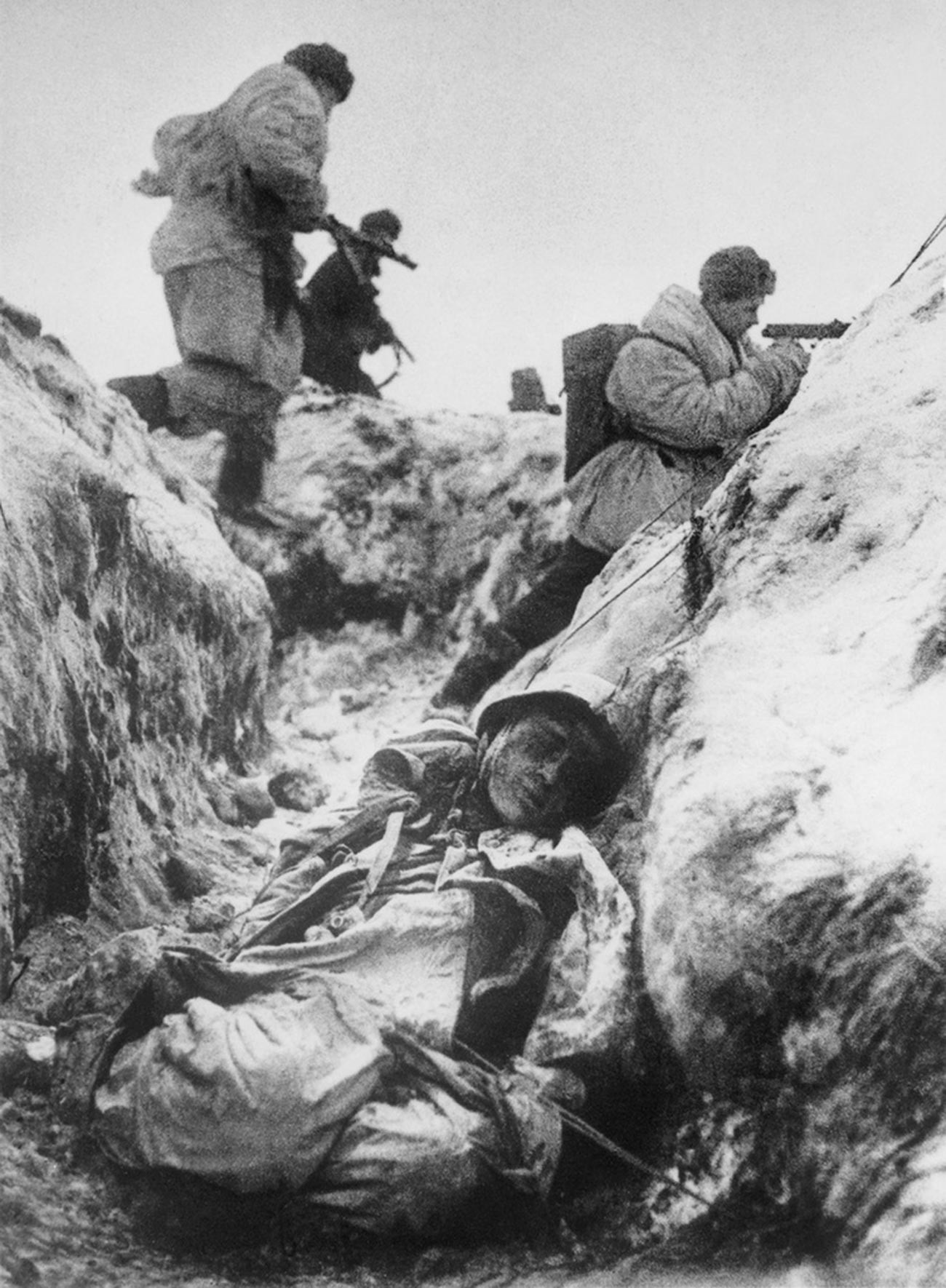 The calamities of the Stalinist regime were largely a continuation of the Bolsheviks’ rise to power. After a short period of relative calmness in 1924-1929, the government under Stalin started “tightening the nuts” with mass collectivization of the agricultural sector (1928-1940), which meant turning individual peasant farms and landholdings into state-controlled collective farms. The peasants opposed the policy at first, because it was naturally a destruction of the way of farming tested by centuries of production. There were thousands of minor and big peasant revolts – but the government employed inhuman repressive methods. ‘Common’ troublemakers were deported and sent to labor camps, and their leaders executed. Historians say that collectivization took the lives of about 10 million people.

Collectivization led to another mass famine of 1932-1933 that affected not only Russia, but also Kazakhstan, Ukraine, Northern Caucasus and took the lives of about 11 million people.

Industrialization of the Soviet economy and production, bounced forward by “five-year plans,” was in full swing, resulting in another wave of repressions against peasants and workers. The GULAG ('Main Directorate of Camps') was created in 1930. Up to 40 million people were executed, imprisoned, damaged and traumatized by the repressions in one way or another. The face of the Russian nation changed forever after the 1930s. And then came World War II.

It’s a sad truth that without Stalin’s collectivization and industrialization policies, the USSR would have had little chance to withstand the onslaught of the Nazi army, but it’s also apparent that WWII took another monstrous toll – more than 26 million people dead, the lives of everybody else changed irreversibly. It’s a miracle that after all the disasters the country suffered in the first half of the 20th century, Russians managed to go on and build the state they are now living in.