How the ‘Road of Life’ saved besieged Leningrad 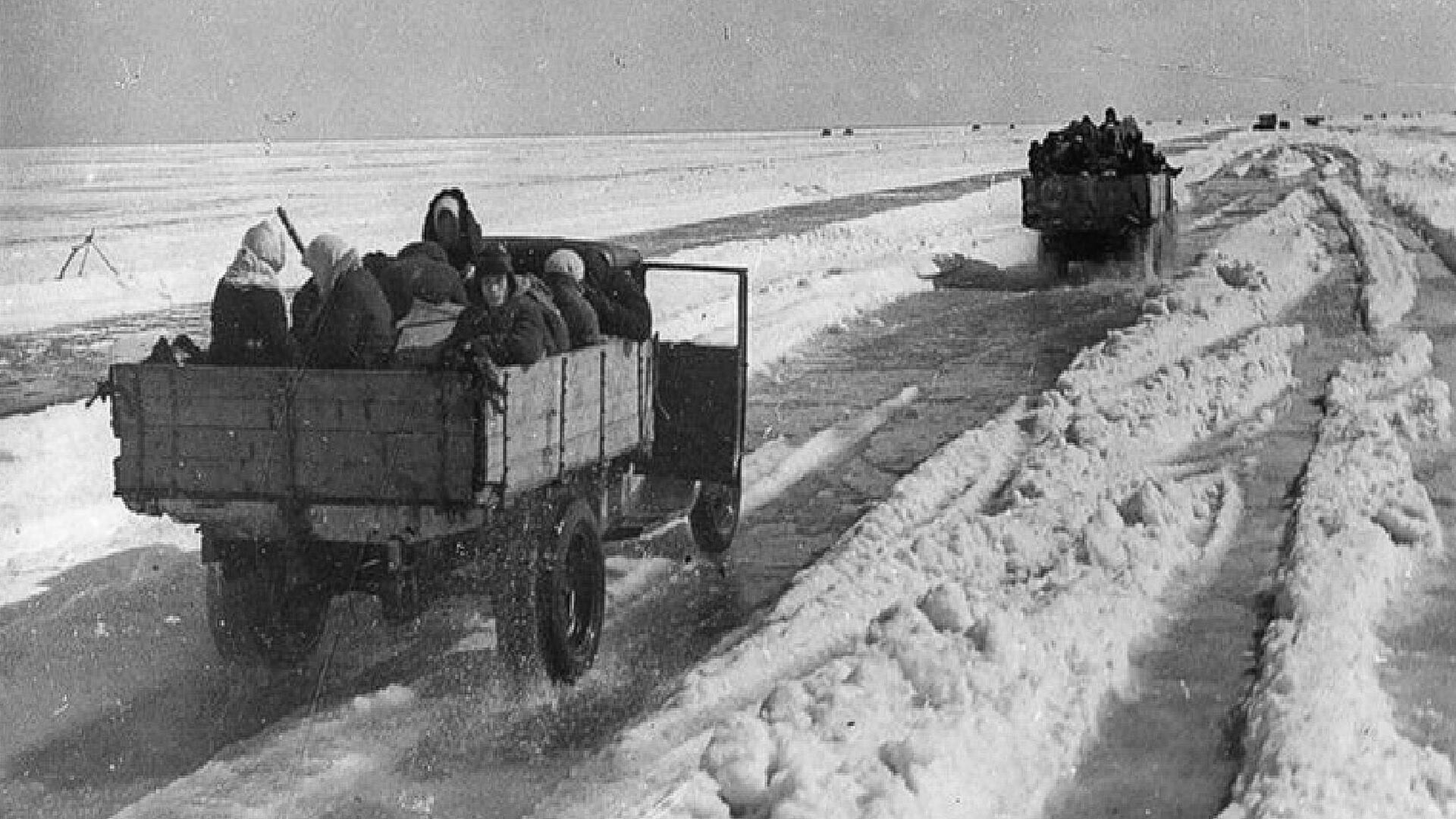 Archive photo
Hundreds of trucks carried food to the starving city on the ice of Lake Ladoga without interruption. For many of them it was a one-way journey.

On September 8, 1941, troops of the Army Group North captured the city of Shlisselburg on the shore of Lake Ladoga, thereby closing the ring of the blockade on land around the second largest city of the Soviet Union. About half a million Soviet troops, almost all of the Baltic Fleet’s forces and up to three million civilians were trapped in the encircled city of Leningrad.

The only way that connected Leningrad with the “mainland” now was along Lake Ladoga. In summer, people began to be evacuated from the city by this way and after the blockade was established, the food was delivered there. 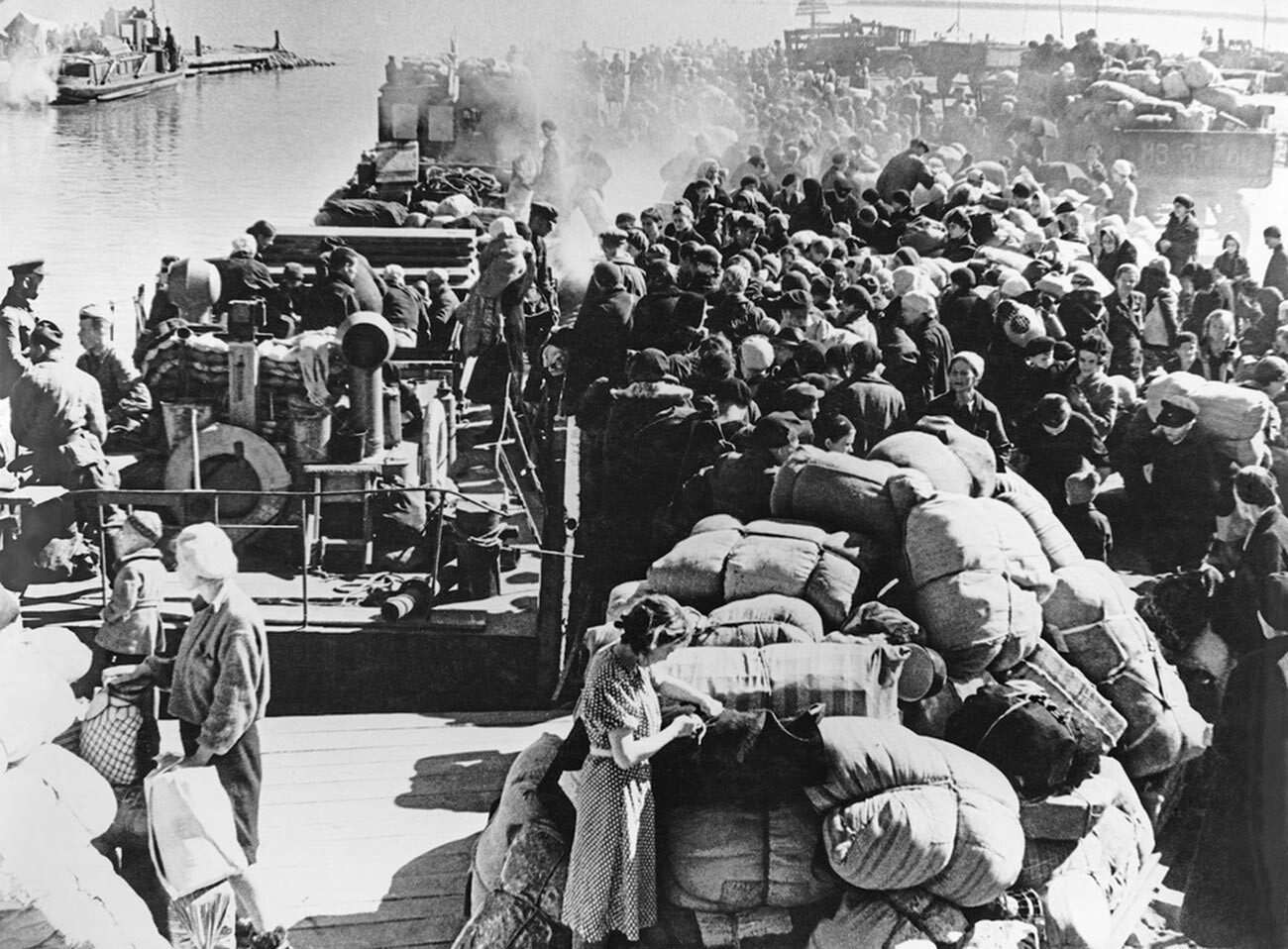 At that time, the Ladoga Flotilla completely dominated in the waters of the lake and the danger to the convoys came from the enemy aviation and artillery, installed on the shore. Despite systematic attacks by the Luftwaffe, sailors managed to organize a constant supply to the city, as well as to lay several telephone and telegraphic cables at the bottom of Lake Ladoga.

With the approach of the cold weather, city authorities and the Soviet military command began to think how communication across Lake Ladoga would be carried out in the winter. This was the most important question for the already starving Leningrad, as planes alone simply could not cope with supplying such a large metropolis. 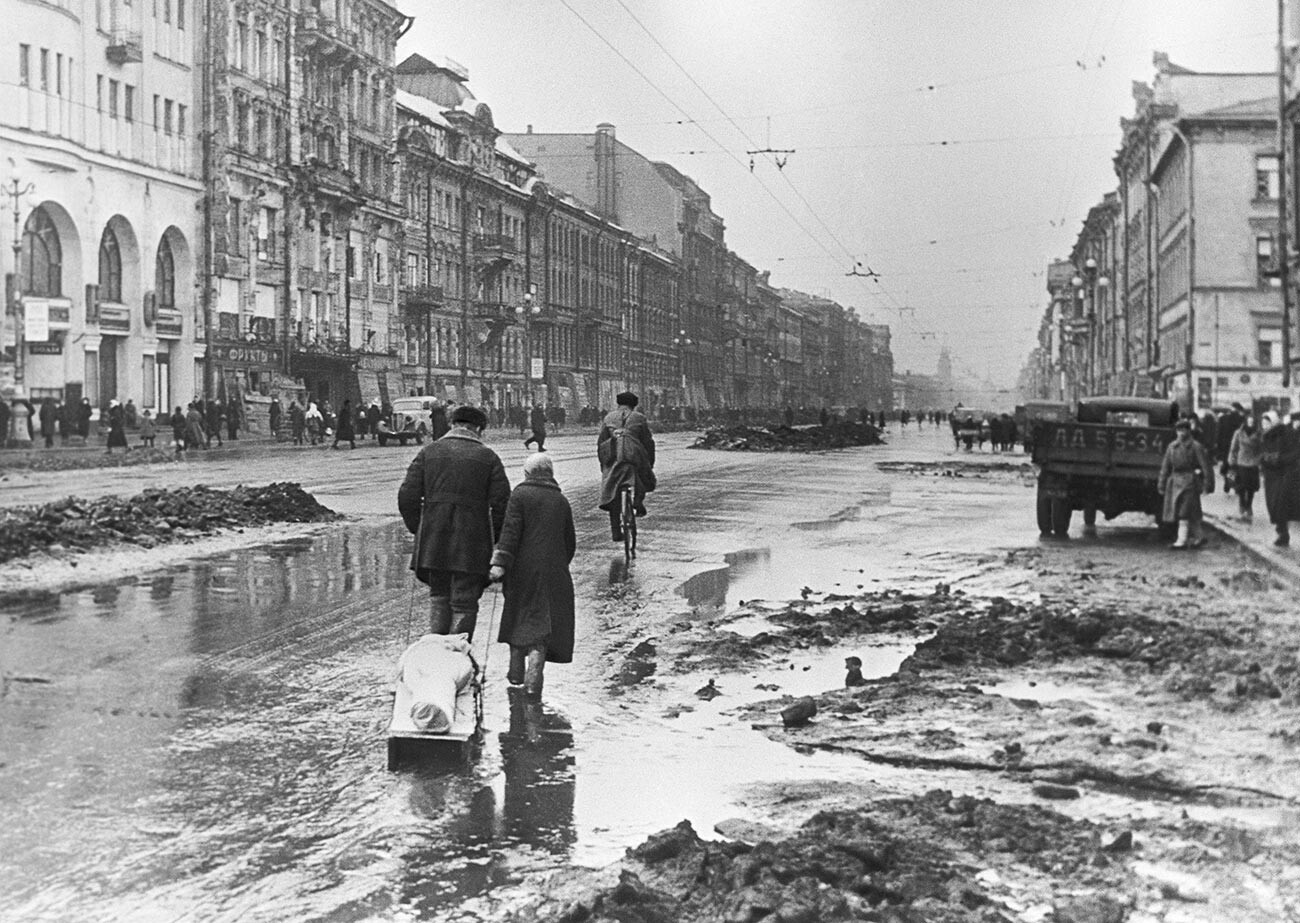 Already in November, teams of hydrographers and scouts began going out onto the still thin ice (10 cm) to determine the contours of the future route, which soon became known as the ‘Road of Life’. In the early morning of November 17, a group of soldiers of the 88th separate bridge construction battalion moved forward to the east coast. It had to go 30 km, marking its way with landmarks.

“The snowy dust was blinding their eyes, the stormy wind was burning their faces and it was sweeping people off their feet,” Technical Troops Lieutenant-General Zakhar Kondratyev, who was the head of the Main Administration of the Red Army Road Transport and Road Service, described the tough route of the reconnaissance group: “The reconnaissance men were going further and further from the shore. On the way they made test holes, measured the thickness of the ice and set landmarks. Danger lurked at every step... The ice was cracking menacingly. At the fifth-sixth kilometer from the shore, the wind increased to a gale. A snowstorm then began. The ice became thinner, sagged more noticeably and the first cracks appeared. The soldiers strapped themselves with ropes. They went in a row, keeping intervals. Everyone kept a close eye on his comrade and, in case of trouble, was ready to rush to the rescue immediately." 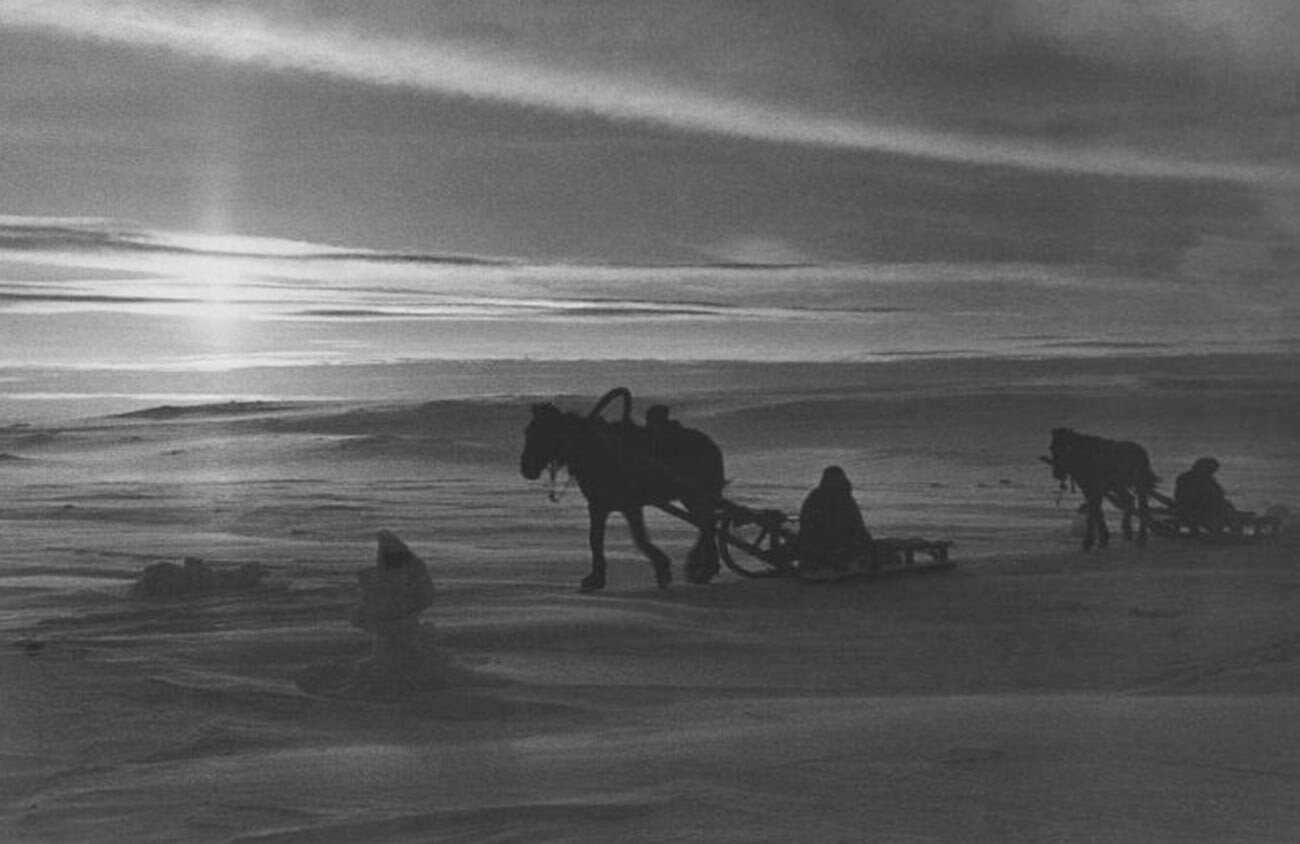 The group was discovered by enemy observers, after which the German artillery opened fire. Some soldiers fell into icy craters caused by the explosions and were pulled out by their comrades-in-arms. The next day, the frozen, hungry and exhausted scouts made it to the opposite bank. Nevertheless, the task was completed - the route was tested and inspected.

To the aid of the besieged

Without wasting time on the ‘Road of Life’, or as it was officially called - the ‘Military Road No. 101’ - a horse-drawn vehicle with supplies headed toward Leningrad. Following it, trucks began to test the dangerous route.

Lieutenant General Feofan Lagunov, who served at the time as head of the rear of the Leningrad Front and actually became the organizer of the famous “Road”, took part in the first trip. “The car went down on the fragile ice,” the military commander recalled: “It was sagging. Under the wheels, now and then, radiant cracks scattered in different directions. A characteristic sound resembling the sound of tearing rubber could be heard. Through the ice, transparent as glass, we could see the dark depths of the bottom and the air bubbles escaping from the wheels. The car had to be driven with great care. As soon as I took my foot off the pedal or slowed down a little, the rear wheels would start to skid.” 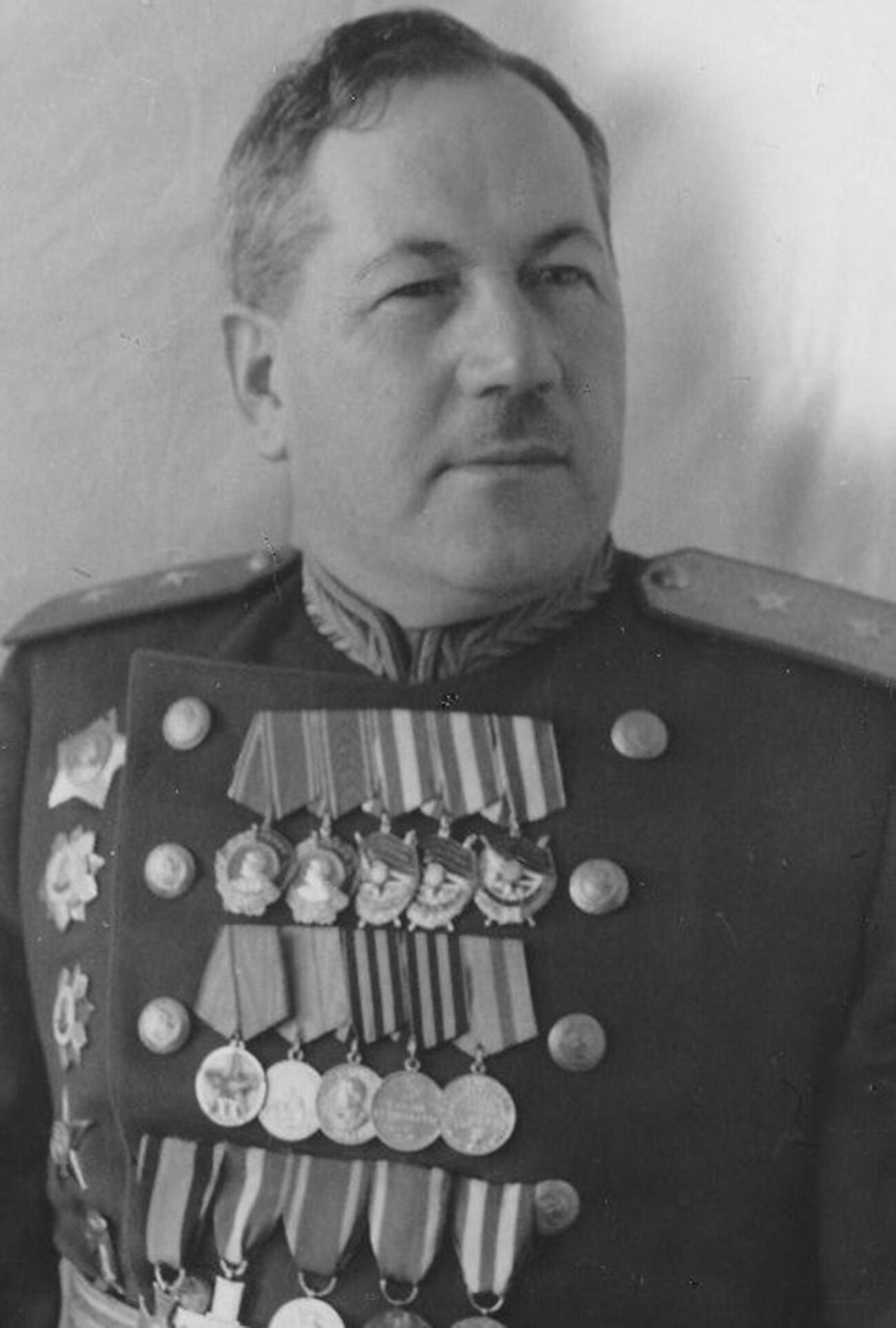 As the ice got firmer and the volume of traffic invariably increased. Nevertheless, in the first weeks dozens of trucks were submerged, even though they were passing through areas that were considered quite reliable. Leningrad scientists determined that the ice bursts were caused by the resonance oscillations, which occurred when the vehicle speed coincided with the speed of the wave under the ice. To prevent tragedies, special rules of the route were developed and recommendations on the speed and spacing of the cars were proposed.

In order to ensure that tons of food could flow uninterruptedly to Leningrad, an enormous infrastructure was created around the ‘Road of Life’. “The woodlands, in some places right up to the lake, were humming with the multitude of voices, the clatter of axes and the ringing of saws,” Kondratyev noted: “They built access roads, cut down wood for supplies, erected warehouses and bases, various kinds of buildings for heating, food, medical and technical aid stations. We prepared road signs, landmarks, portable shields and bridges, in case of cracks on ice. Auto repair shops, telegraph and telephone stations were equipped and camouflage equipment was prepared. Similar work was being done on the eastern shore of the lake. 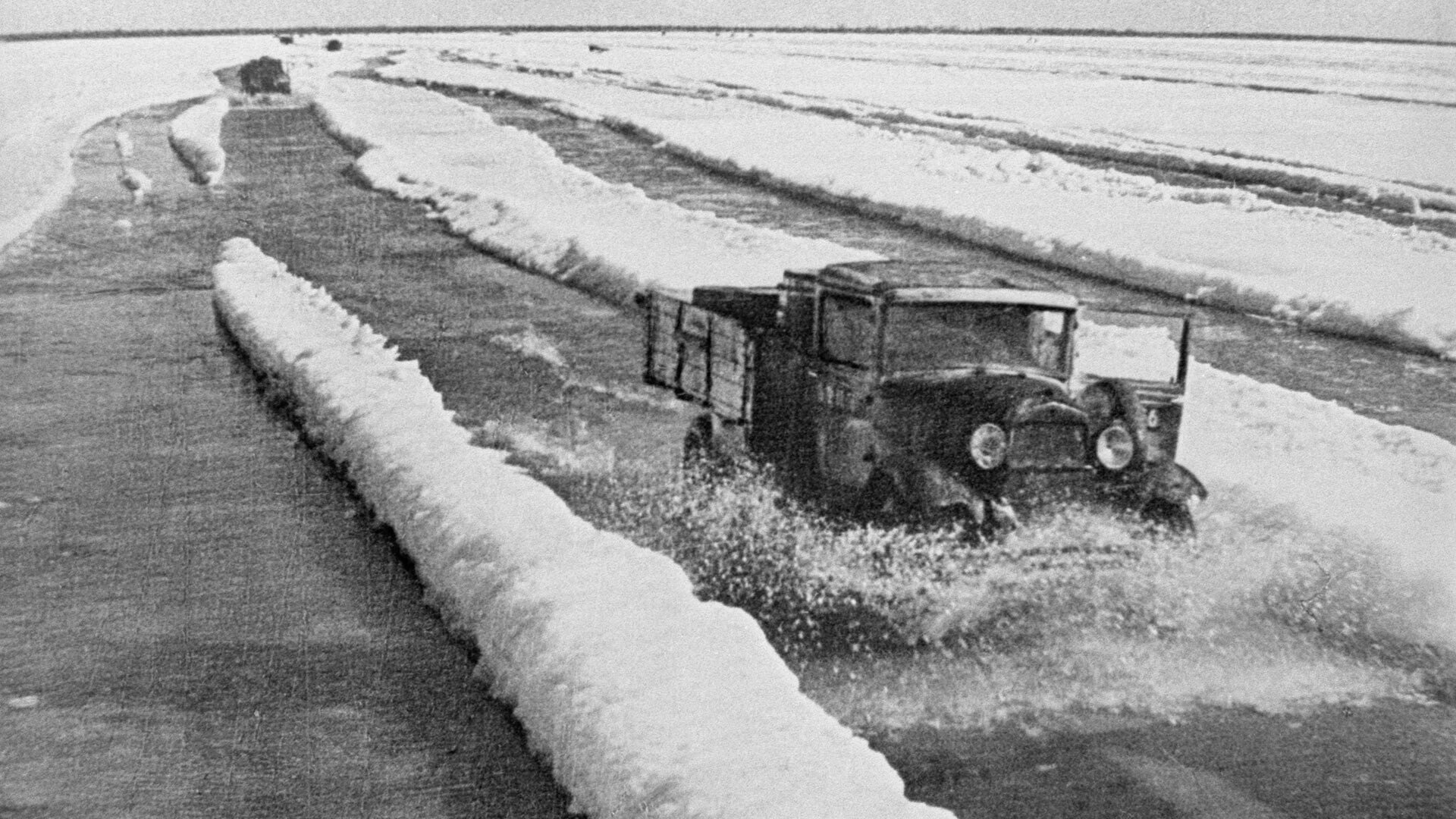 More than 300 traffic controllers, mostly women, stood along the ‘Road of Life’, dressed all in white with flags and flashlights. These ‘White Angels’, as they were called, were highly visible not only to Soviet drivers, but also to enemy snipers and pilots.

Two divisions of internal troops of NKVD were guarding this important route and the sky was covered by several fighter aviation regiments and batteries of small-caliber anti-aircraft guns pulled out to the ice. The search for enemy saboteurs was carried out by skated ice boats and yachts with gunners on board. Protection against marauders at the transport stops and at the loading and unloading bases was provided by Leningrad police forces. 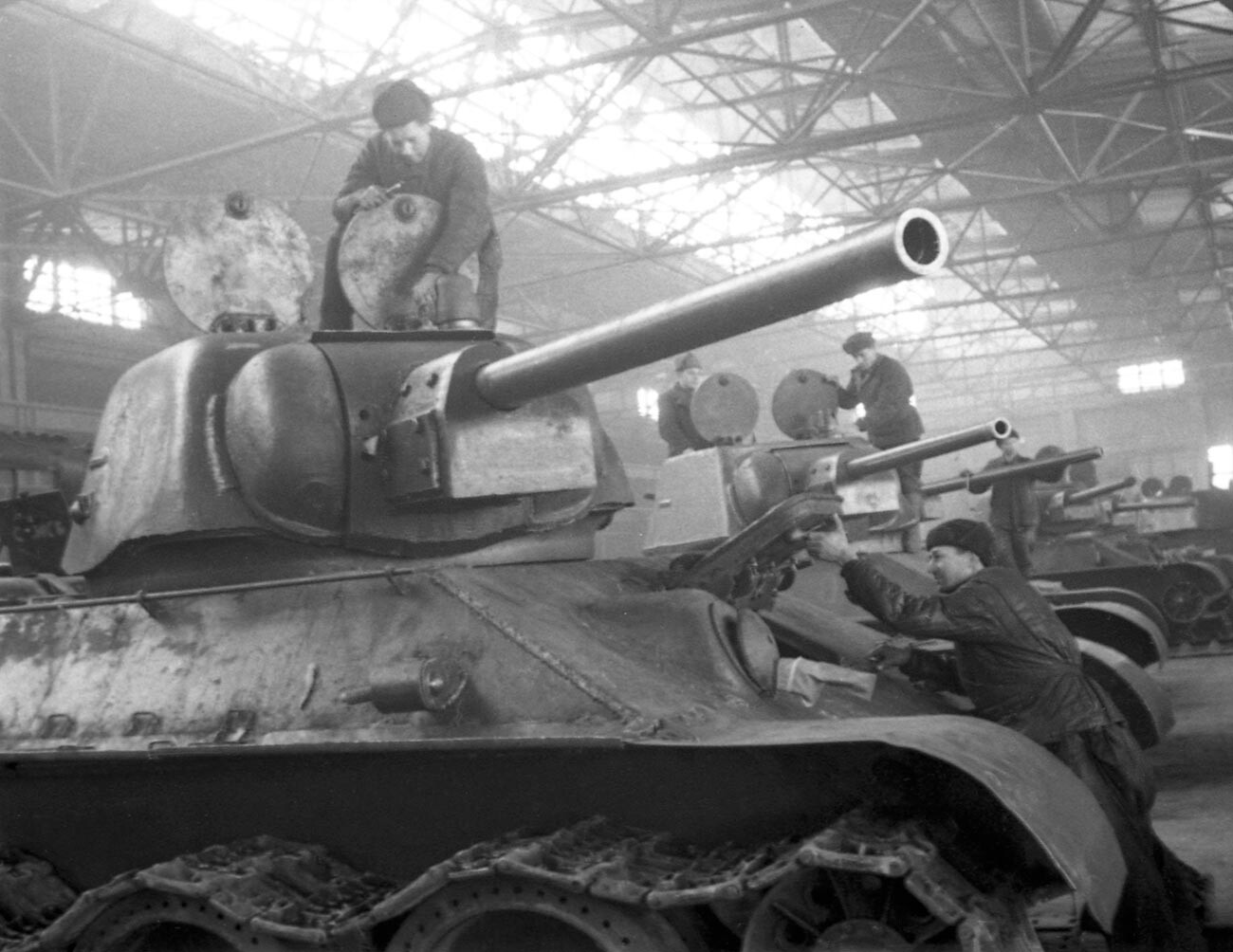 Surprisingly, goods were not only sent to exhausted Leningrad, but also from it. Some of the Kirov Plant’s facilities and specialists were not evacuated to the Urals and continued to produce KV heavy tanks literally near the front lines. Since the enemy held the city tightly under siege, but made no serious attempts to storm it, they were sent to other parts of the Soviet-German front.

The steel monsters, which weighed 40-50 tons, had their turrets removed to reduce the pressure on the ice and were towed on sledges. In addition, the Red Army received mortars and artillery pieces from the besieged Leningrad, which took part in the battle for Moscow. 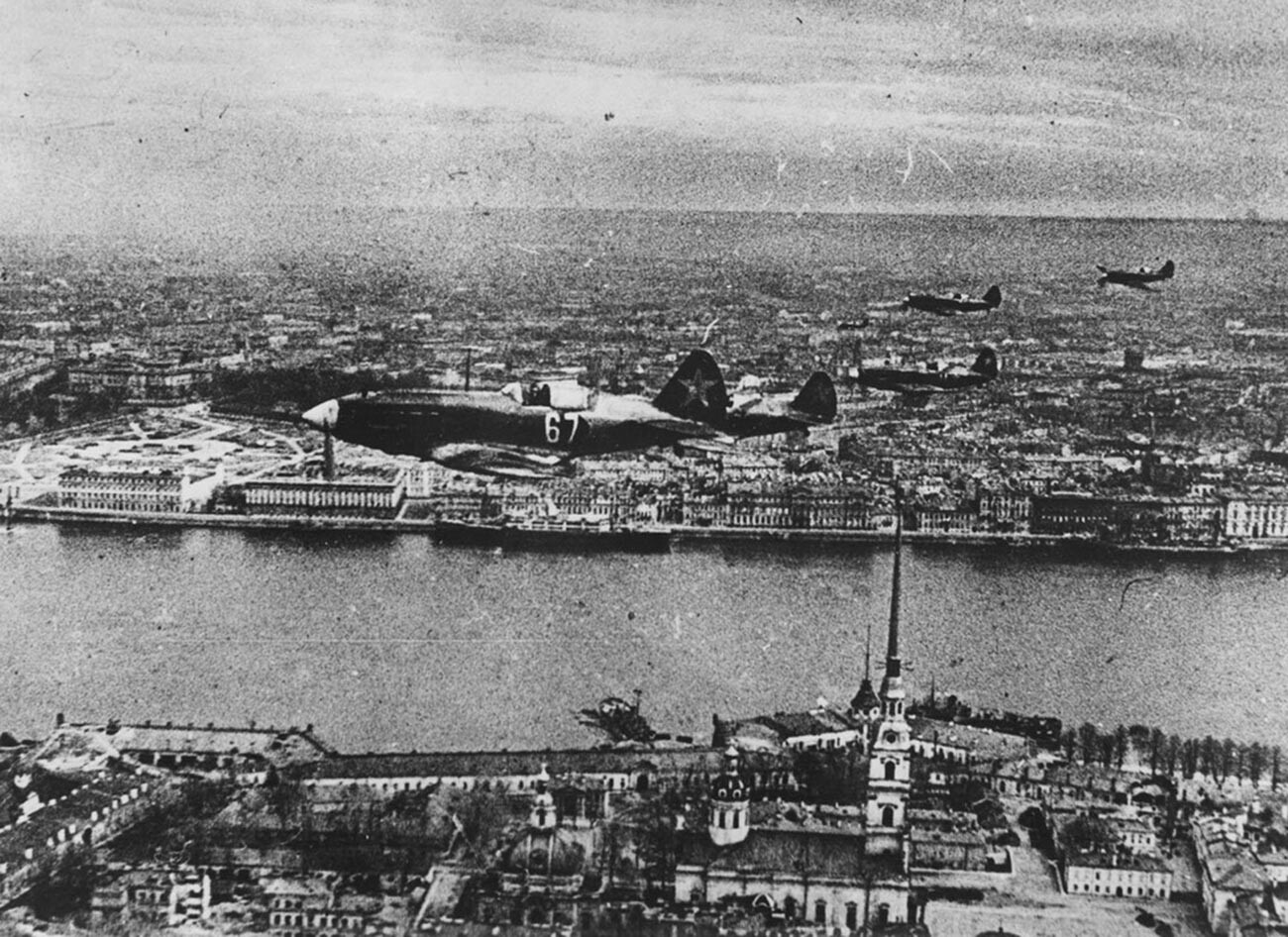 Lieutenant-General Andrey Kozlov recollected: “On April 22 and 23, 1942, about eleven thousand soldiers with weapons were transferred to the eastern shore through Ladoga - reinforcement for the 54th army. Only half of the way across by cars, the other half was on foot in icy water.”

To destroy at any cost

For the Germans, the ‘Road of Life’ was like a bone in the throat. It strongly interfered with their plan to starve the city to death and was regularly attacked by aircraft and artillery. The enemy mostly hit not individual targets, but areas, trying to break up the ice.

The resulting ice-holes, covered by a crust of ice and just a little covered with snow, were almost invisible and therefore deadly for drivers, especially at night, when the main traffic was flowing. In this case, the same skated ice boats, who carefully inspected the route, often helped out. 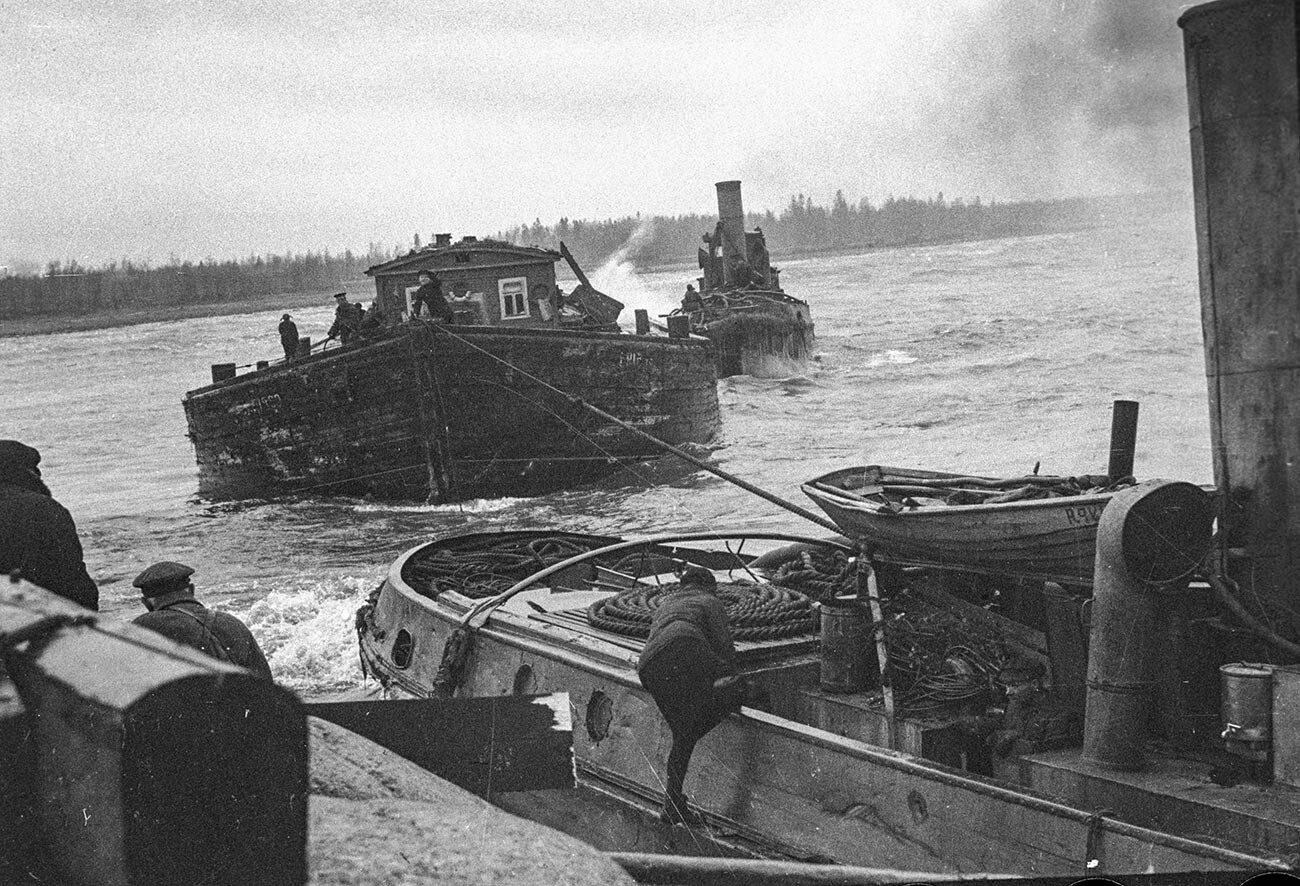 In spring of 1942, when navigation was restored, the Ladoga war flotilla appeared on the lake again. This year, it had more enemies: in addition to the air force, the Soviet sailors had to withstand detachments of German and Italian torpedo boats, operating from the Finnish naval base in Lahdenpohja. On top of that, the so-called ‘flotilla of ferries’ of German ‘Siebel’ landing barges was formed.

The enemy, however, was not able to change the situation on the Ladoga Lake in its favor. Also, it could not prevent the laying of the main pipeline for supply of the blockade Leningrad with combustible fuel and fuel at the bottom of the lake in May-June 1942.

On October 22, the Germans and their allies attempted to seize the small island of Suho, where the lighthouse, artillery battery and a garrison of 90 people were stationed. The attacking forces numbered more than a hundred men on 15 landing barges supported by boats. The Soviet command in Leningrad immediately sent reinforcements to the island, but they were not needed in the end - the air force had solved the problem. 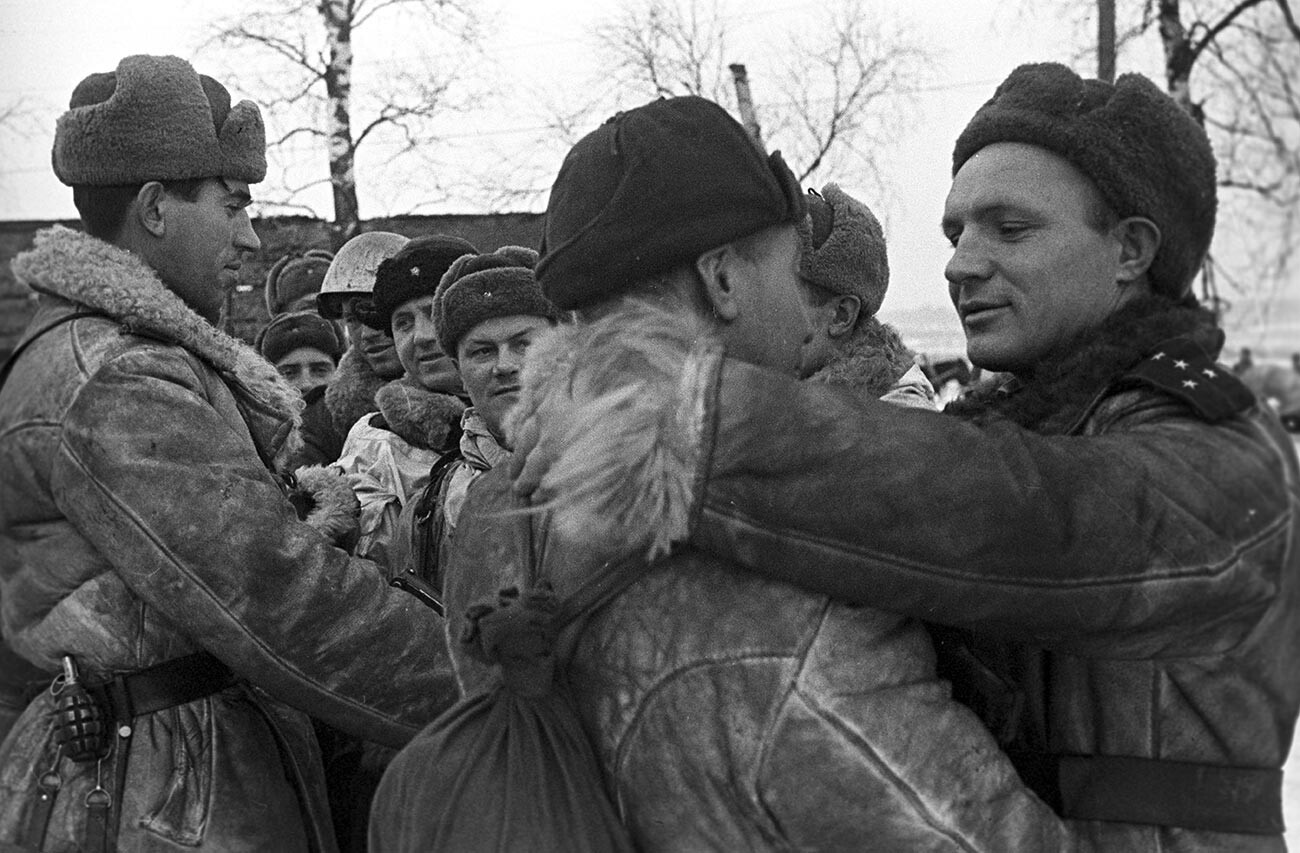 Soldiers of Leningrad and Volkhov Fronts greeting each other after breaking the blockade.

“Not even 30 minutes later, hundreds of warplanes flew over the lake from behind the forest, almost at ground level over our heads…” recalled Captain of medical service Georgy Somov: “As we learned later, the command lifted almost all the aviation of the Baltic Fleet and part of the aviation of the Leningrad and Volkhov fronts. For the Fascists all hell broke loose. In a few minutes, they lost most of their landing crafts and boats. The approaching ships of the Flotilla finished off the remaining afloat. In this battle, the fascist military flotilla on the Ladoga Lake was completely defeated and from that time on, enemy ships did not cause us any troubles.”

In January 1943, Soviet troops finally broke the blockade of Leningrad and food began to arrive in the city, mainly by train. During the two winters when the famous route was in operation, more than one million cargoes were delivered to the starving city and about one and a half million civilians were evacuated to the “mainland”.

More than three hundred cars went under the ice during this time and the number of soldiers, sailors, personnel of security and civilian services who gave their lives to keep the ‘Road of Life’ alive and functioning cannot be accurately counted.