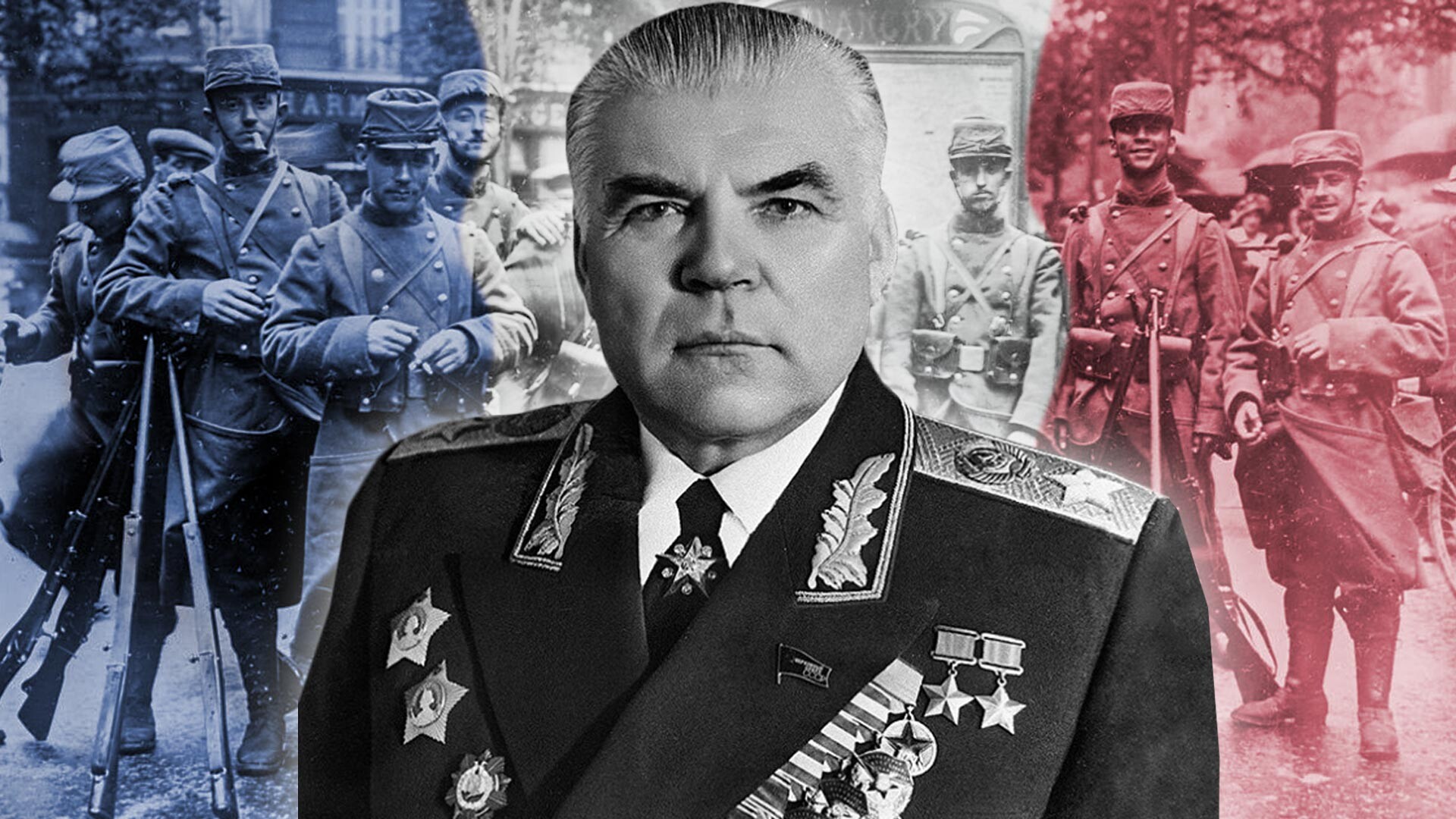 Russia Beyond (Photo: The Ministry of Defense of the Russian Federation; Public Domain)
Before Rodion Malinovsky became one of the Soviet marshals who turned the tide of World War II, he had time to fight in the French “African army”.

Marshal Rodion Malinovsky was one of the main architects of the Soviet triumph in World War II. Under his direct command, the Red Army prevented the Germans from deblocking Field Marshal Paulus’ encircled grouping in Stalingrad, liberated the Donbas and Southern Ukraine, Romania, Hungary and Austria and defeated Japanese forces in Manchuria.

“The moment of decision-making by a commander is a difficult moment,” Malinovsky used to say: “One must dare to do a great thing, one must give oneself completely to only one, often very risky, necessary decision… Doubts, difficulties and searches are intertwined. But the decision must be made. It requires great courage and willpower.”

Courage was always more than enough for Rodion Yakovlevich. It is interesting that he demonstrated it not only in the fights for his motherland, but also for far-away France. What was the link between the Soviet commander and this European country? 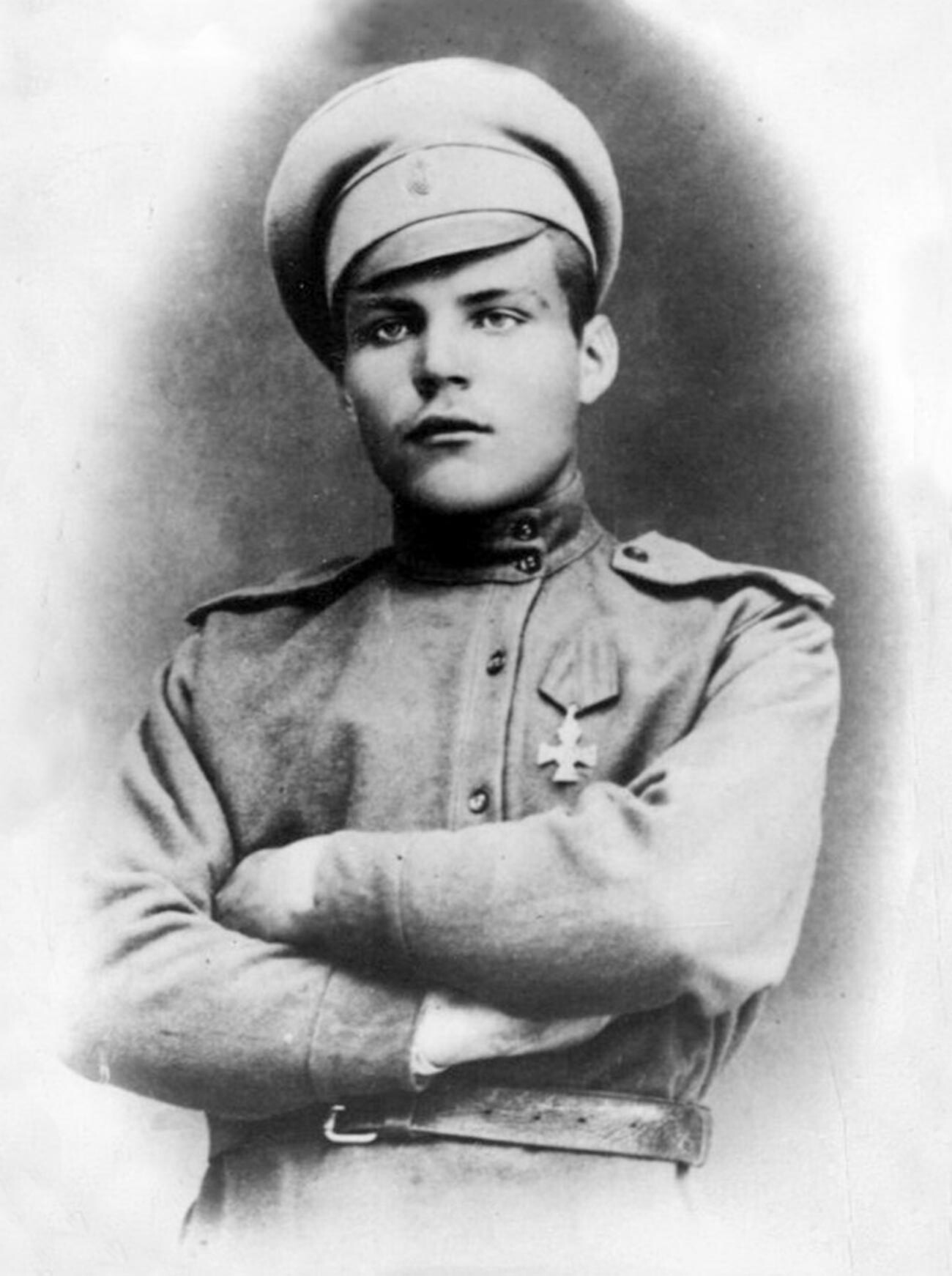 Malinovsky arrived in France in the spring of 1916 as a member of the Russian Expeditionary Corps sent by Emperor Nicholas II to aid his ally. The corporal from the 256th Yelisavetgrad Infantry Regiment was assigned to the Western Front, because he had learned French as a child, spending time at the estate of Count Heyden, where his mother served as a housekeeper.

“We were armed at the port and brought to Camp Mailly, where all the kings and presidents made uninterrupted inspections and parades for a month and, in June, the 1st Brigade was sent to the front near Mourmelon - near Reims, then we were moved under Sillery and then under Fort Brimont, there we were captured by the February Revolution,” Rodion Yakovlevich recalled.

The collapse of the monarchy in Russia and the rapid breakup of the Russian army could not fail to affect the expeditionary forces in France. In the summer of 1917, some of the soldiers stationed at La Courtine refused to swear allegiance to the new Provisional Government or to obey the military command and demanded to be sent home immediately. 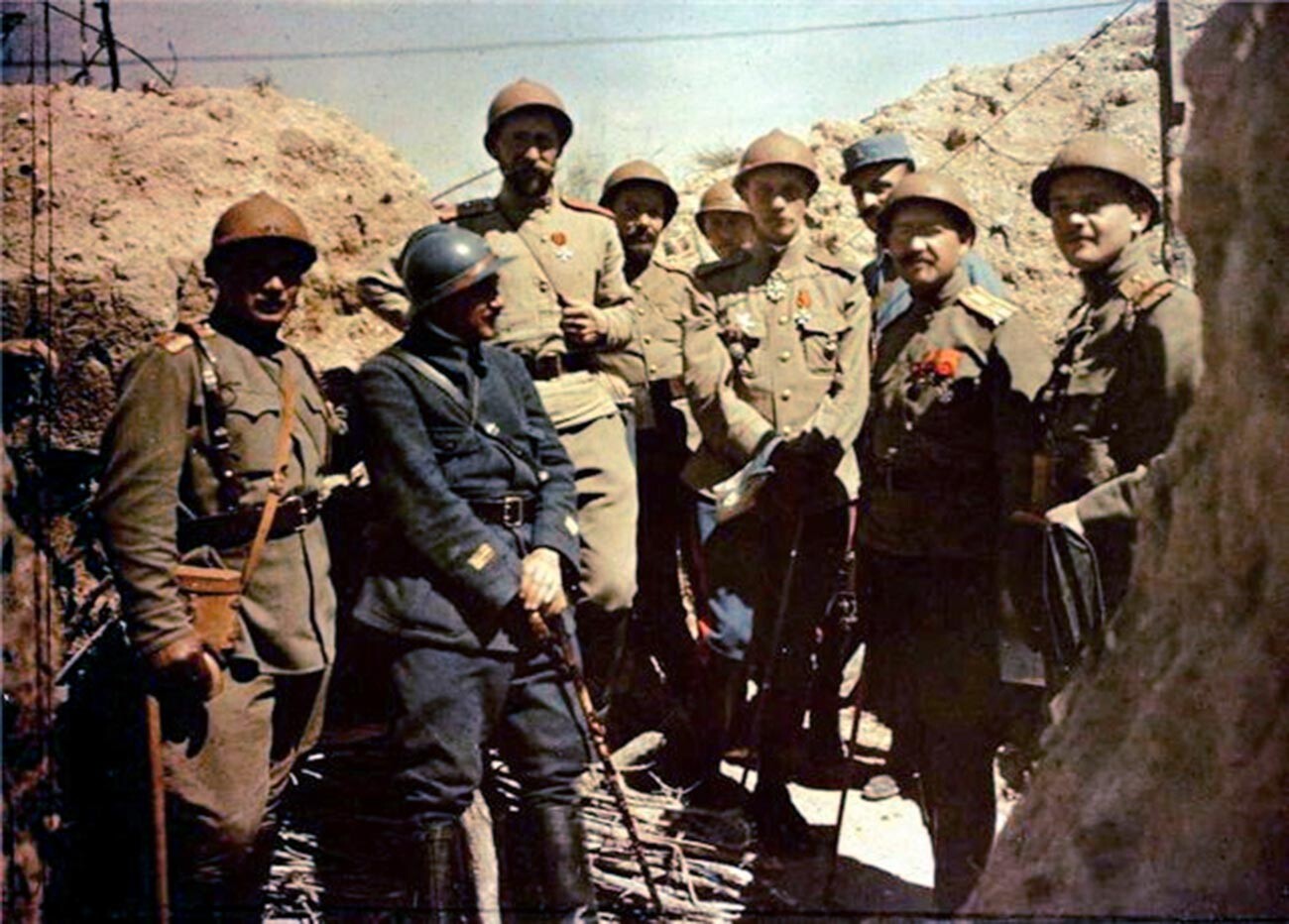 After negotiations failed, the uprising was brutally suppressed by the French gendarmerie and by Russian units, which had expressed loyalty to the new government. Rodion Malinovsky heard about these events from the hospital, where he was admitted with an arm wound sustained during the fighting near Fort Brimont.

The uprising at Camp La Courtine and the Bolsheviks’ subsequent rise to power in Russia effectively put an end to the Russian Expeditionary Corps. The French government gave the troops a choice: go as laborers to North Africa, serve behind the lines of the fighting troops or join the army of the Third Republic. It was the latter option that Malinovsky chose. 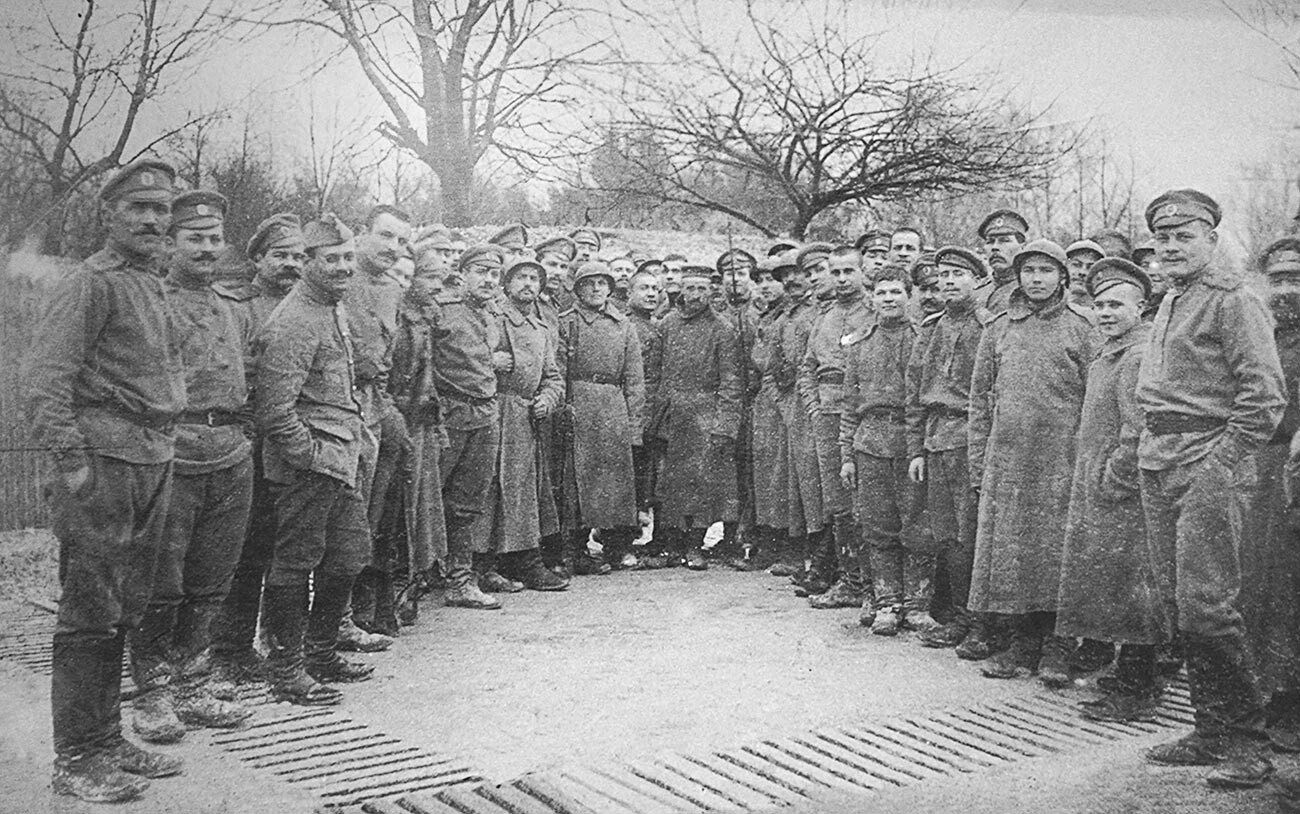 Rodion Yakovlevich joined the ‘Honorary Russian Legion’, formed at the end of 1917 by Colonel Georgy Gotua. This formation was part of the 1st Moroccan Division, which, in turn, was part of the so-called French ‘African Army’ stationed in Algeria, Morocco and Tunisia.

Vyacheslav Vasilyev, a member of the ‘Legion’, described the battles near Suasson in May 1918 as follows: “The Moroccan Division takes the whole blow of the heavy German boot and, panting with despair and with the last energy, can hardly contain the flow of the enemy… At this critical moment, when everything seemed to be lost, the Commander of the 8th Zouave Regiment throws his last reserve, the Russian Legion, into counterattack! Thrown from one place to another, into the thick of the battle, they were thrown back to the Zouaves and the Moroccans, to places where it was impossible to hold any longer. Their arrival gave a new energy and boosted the spirits of the tired, exhausted fighters. ‘The Russians are with us’ was passed on the chain and all eyes were expectantly directed at these giants in safety jackets, who like a toy would carry heavy machine guns of Hotchkiss (they weighed 23.6 kg) on their shoulder with one tug.” 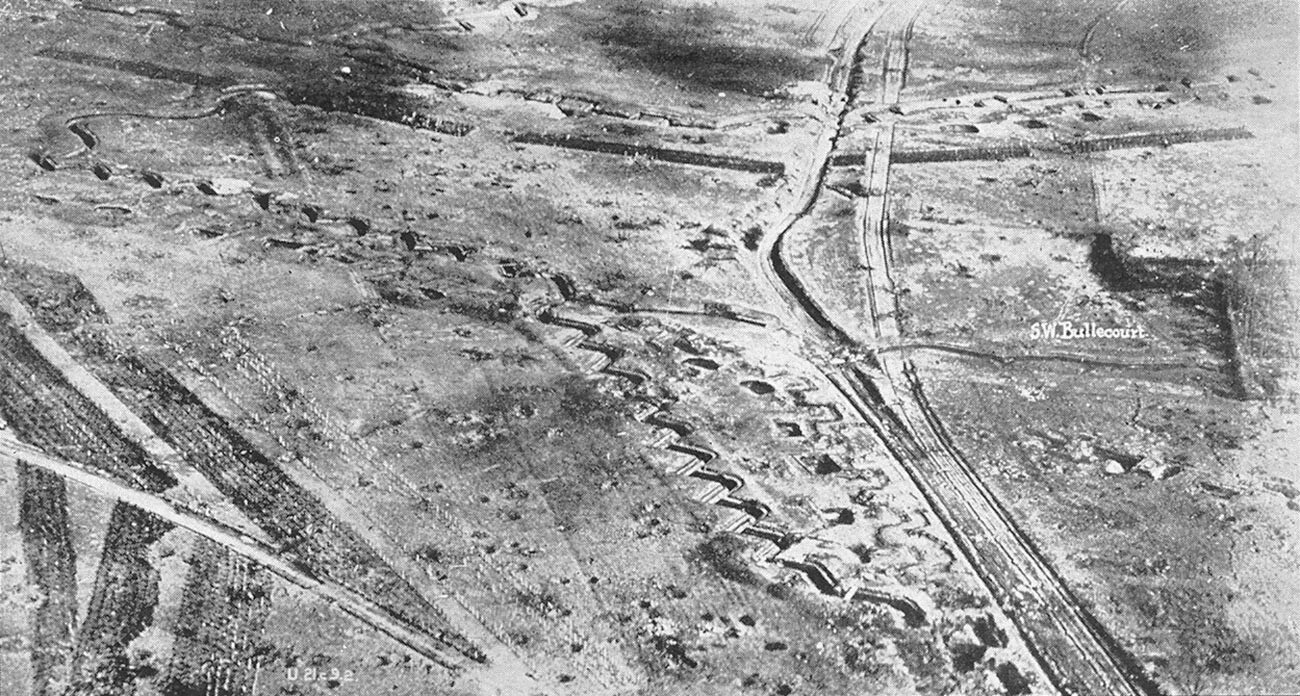 In the fall, Malinovsky excelled in breaking through the fortified Hindenburg Line, for which he was awarded the French Croix de Guerre (Military Cross) with a Silver Star. “An excellent machine gunner. Particularly distinguished himself during the attack on September 14, firing his machine gun at a group of enemy soldiers who offered stubborn resistance, disregarding the danger of destructive enemy artillery fire,” the chief of the Moroccan Division said about him. During his time in the French army, Rodion Yakovlevich managed to rise to the rank of sergeant.

After the end of World War I, Malinovsky decided to return to Civil War-ridden Russia. He made his way home via the Far East and Siberia. The future marshal was detained by a Red detachment in the vicinity of Omsk. Seeing his French papers and awards, they thought he was a white officer and intended to shoot him. 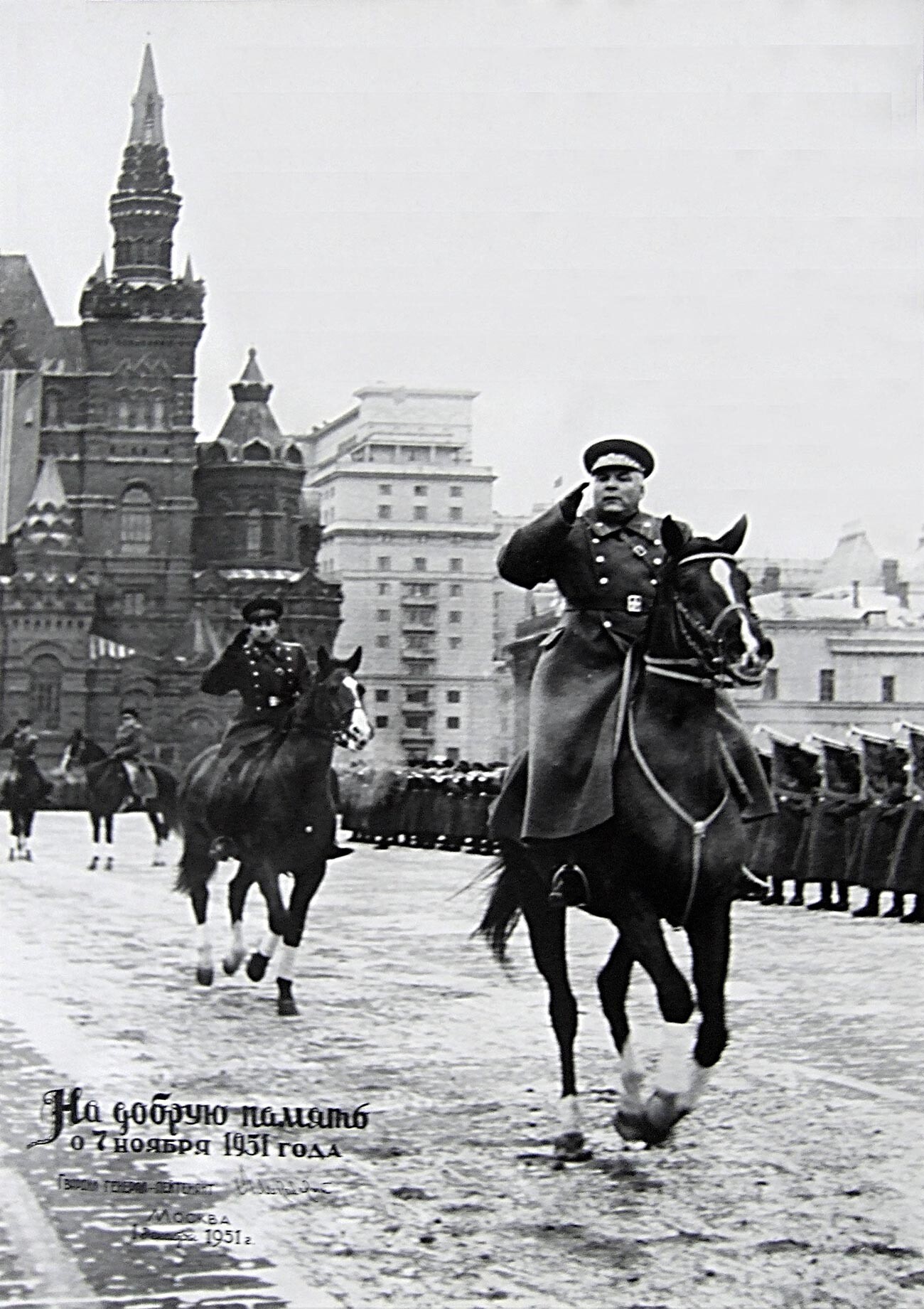 Marshal Malinovsky during the parade on Red Square in Moscow.

“He cussed them out in desperation and in annoyance, using all the richness of the Russian language. Only then did the soldiers recognise him as one of their own and take him to headquarters. Fortunately for Dad, the local doctor knew French. So my father was saved…” recalled Natalia Malinovskaya.

Later, Rodion Malinovsky had a successful military career in the Red Army, brilliant victories in the battlefields of World War II, earning him truly all-union fame. However, the marshal never forgot his “French” youth. “His love for the French language was preserved in him throughout his life,” Natalia Rodionovna noted: “I remember, my father always had volumes of La Rochefoucauld, Pascal, Flaubert on his desk. Reading French was a daily relaxation for him…”

In 1960, Malinovsky visited France with Nikita Khrushchev as Minister of Defense of the USSR. On the Soviet leader’s initiative, they toured places associated with the marshal’s glorious military past. 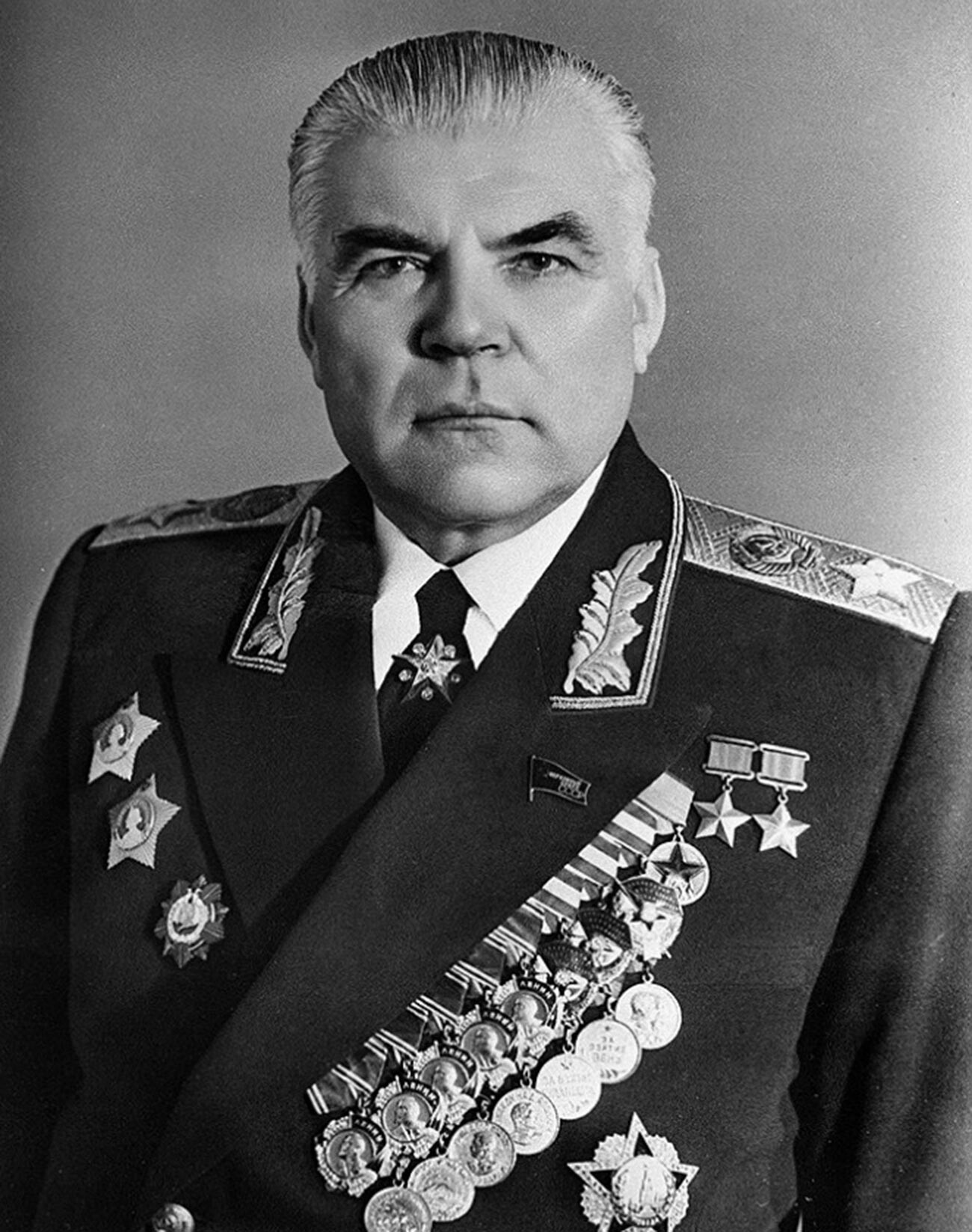 Among the Russian emigrants in France, there is a legend about how Rodion Yakovlevich behaved at the memorial service for the fallen Russian soldiers in the cemetery Mourmelon-le-Grand near Reims. When the flag of Tsarist Russia began to be raised during the ceremony, Marshal of the Soviet Union Malinovsky noticed it and, without the slightest embarrassment, immediately saluted it.