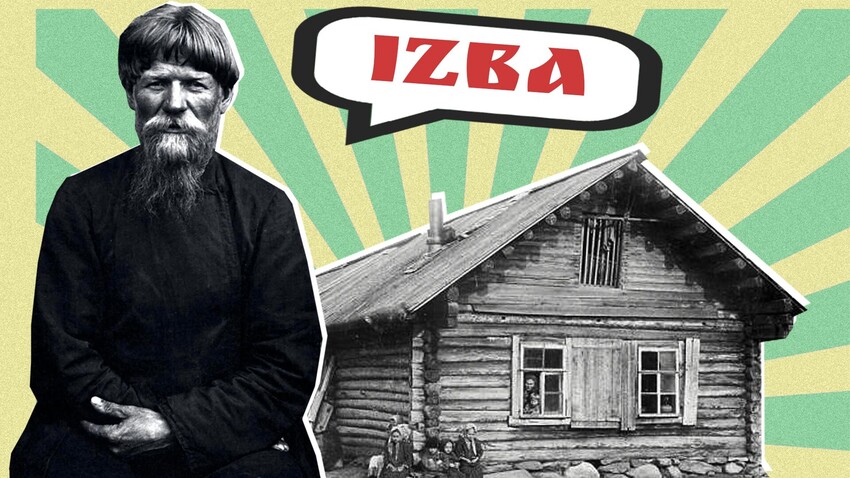 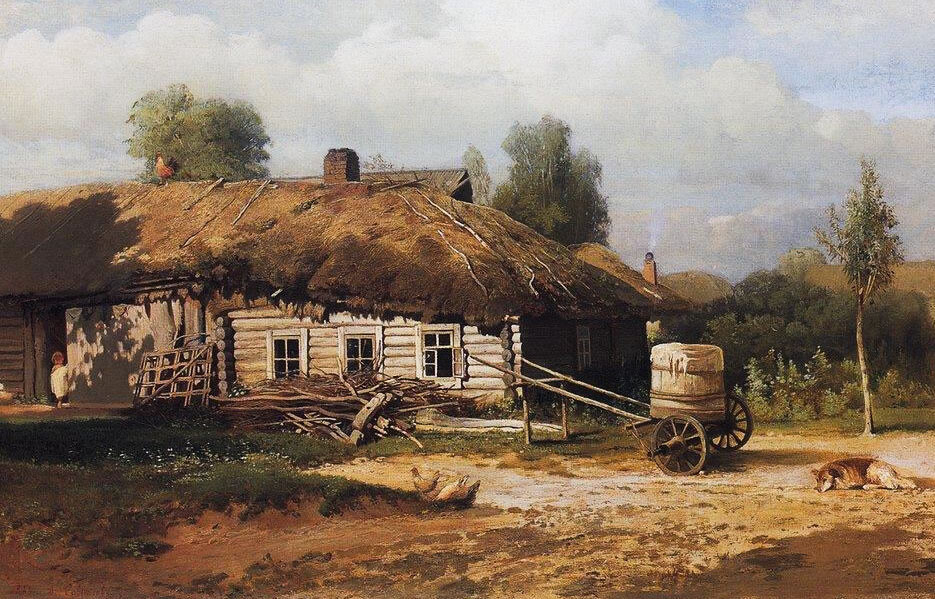 Alexey Savrasov "Landscape with an izba"

An izba, in pre-revolutionary Russia, was considered to be any house that was heated using a stove. Even rooms in tsars’ palaces could be called that. For instance – perednyaya izba (“frontal izba”), where the guests of the male half of the palace would visit; othozhaya izba (an old term for “restroom” – literally meaning room one “steps away” to) was the restroom/bathroom, and so on. Therefore, peasants and tsars in the Rus' all lived in izbas. The word was also used to describe a separate house, with its central part (a log cabin with four walls) referred to as klet’ (“crate” or an old for “cell”). If this klet’ stood on solid ground – and not on a wooden or stone foundation, it would’ve been called a gornitsa. 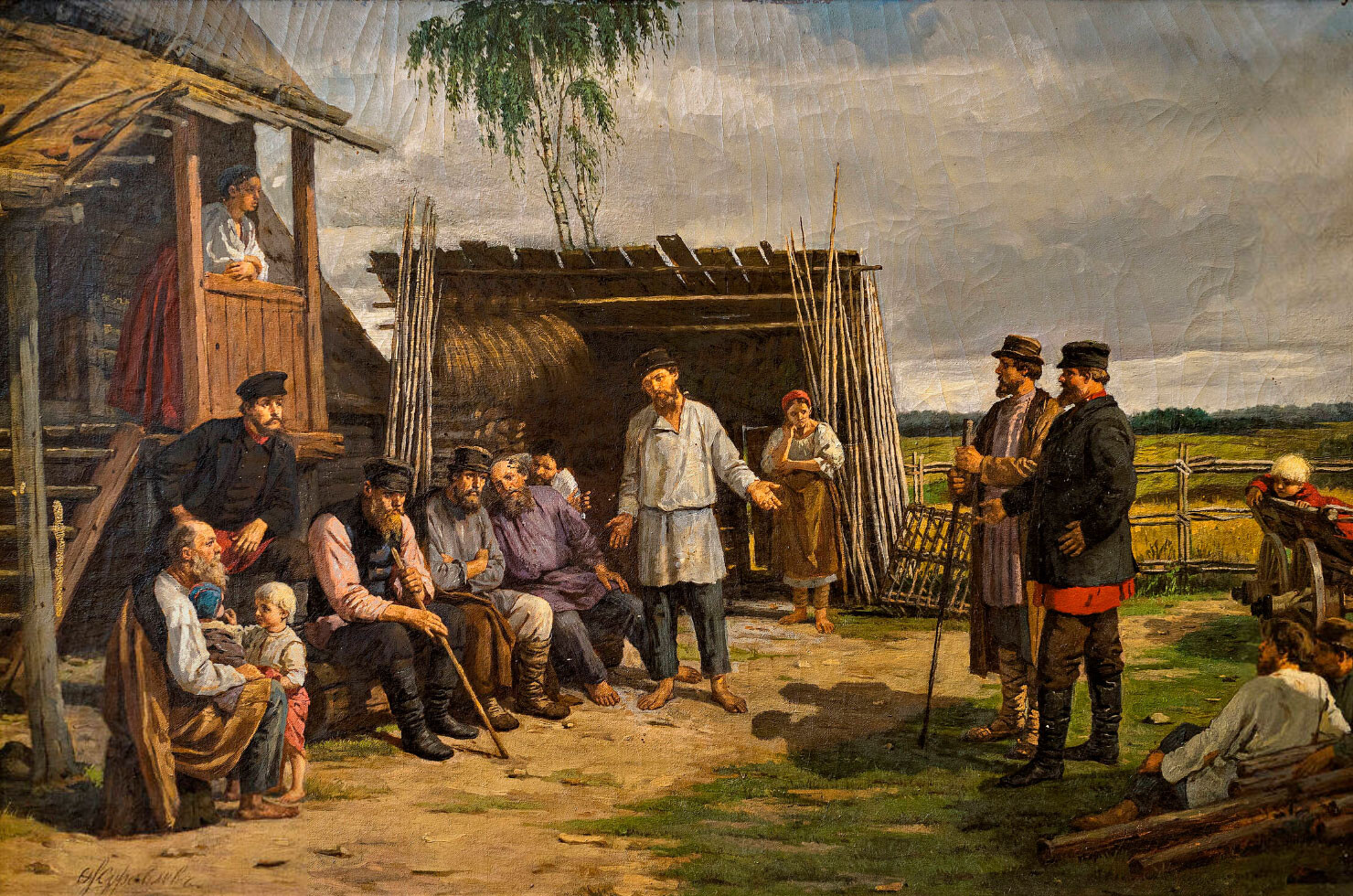 Obschina is a form of organization of peasant society. The term implies a collective responsibility the group has for the actions of its members; an obschina could select representatives and collectively decide on community issues. One of the Bolsheviks’ main objectives after the 1917 Revolution was to subvert this absolutely core Russian mode of cohesion on which the very foundation of native peasant collectivism was built. 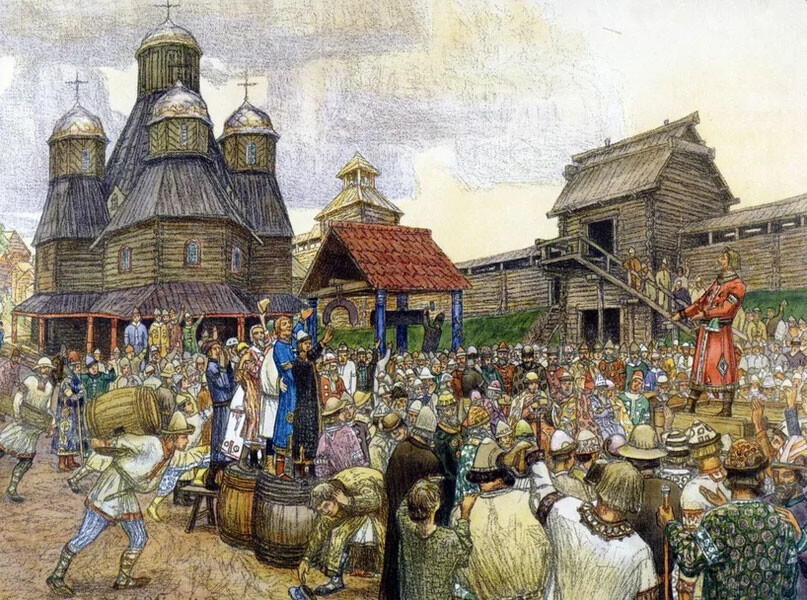 Veche in old Russian stood for a collective administrative body that acted as an instrument of direct democracy. Participating in it were muzhi ('men') – heads of free families, the value of whose voice was determined by their social status. After the formation of an independent Russian state, there was for a while a so-called Zemsky Sobor active in it: a legal body with representatives from across the country gathering to solve the most pressing national issues. A zemsky sobor could elect tsars, announce the gathering of a militia, oversee the signing of major government documents, and so on. 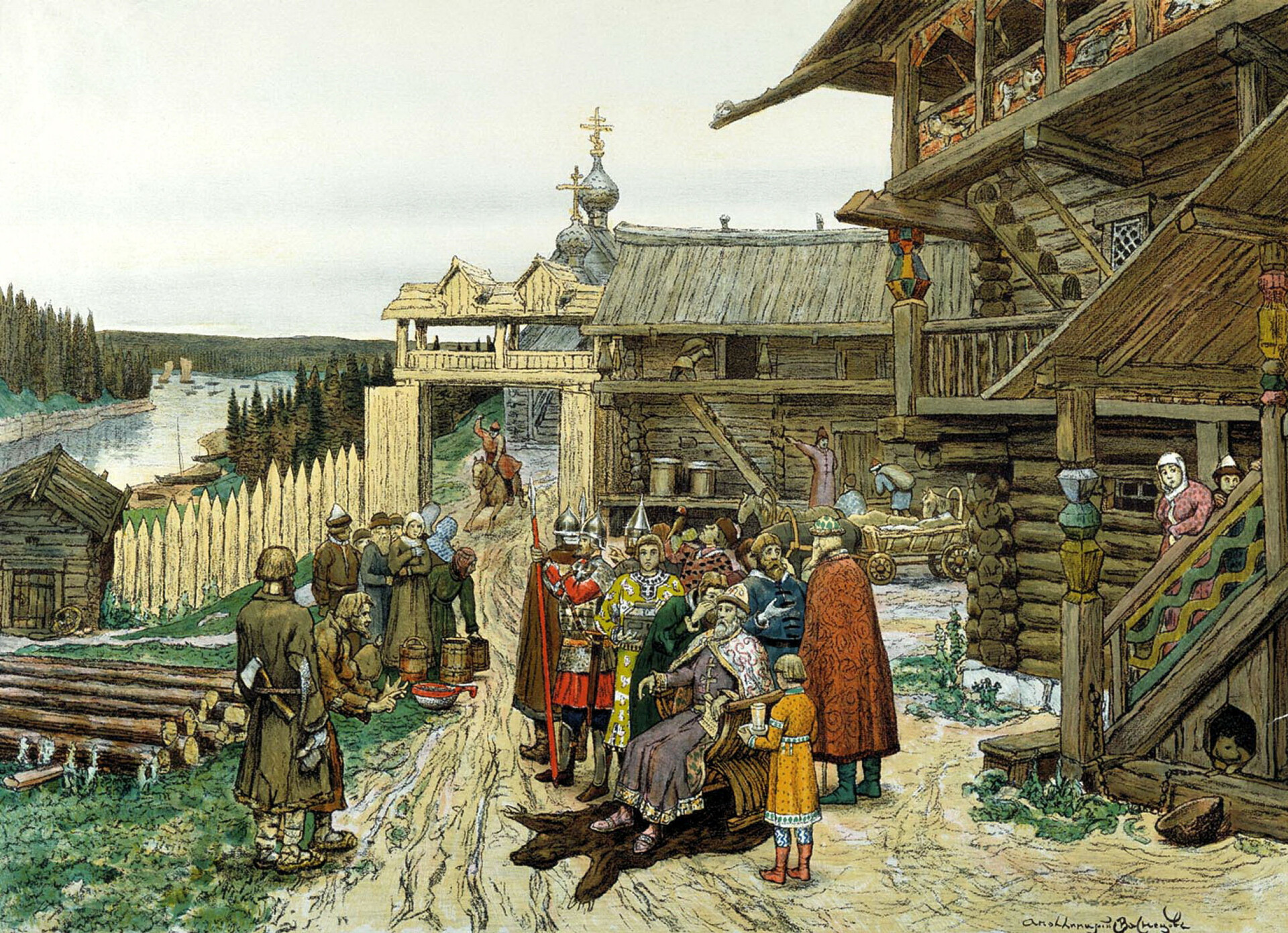 Apollinary Vasnetsov "The court of a provincial prince"

A knyaz was any leader of a tribe or a head of the entire people. In time, the word began to be used to denote the leader of an early feudal state – a 'knyazhestvo', which is literally a principality – meaning that knyaz is really a “prince”. This prince was also the military commander, protecting his people from raids and robbery; he was the main arbiter in legal squabbles, as well as a religious leader. With the development of society and state, grand princes (they ruled over principalities) and provincial princes (who ruled over smaller domains) appeared – the latter often being subservient to the former. Ivan the Terrible was the first Grand Prince of Moscow, who in 1547 also proclaimed himself Tsar of all Russia, thereby making all other princes subservient to him. 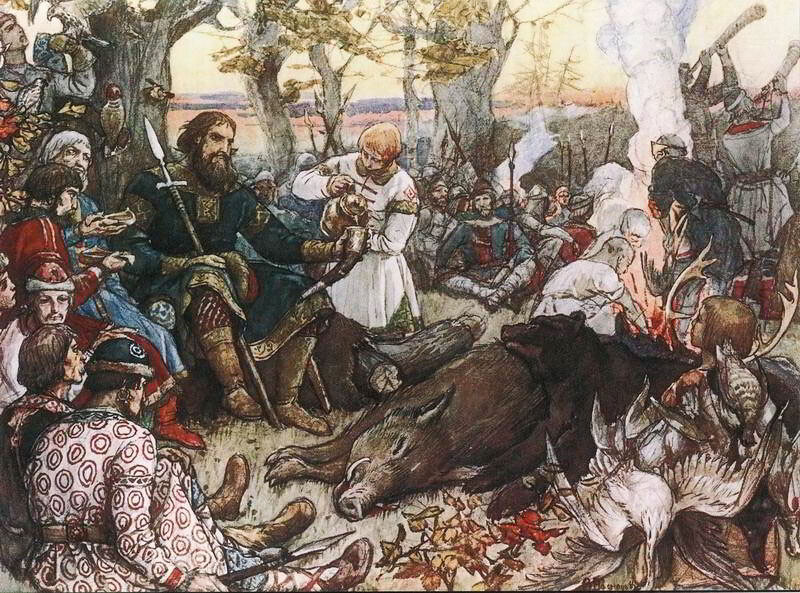 Viktor Vasnetsov "Prince Vladimir taking a rest after a hunt"

Druzhina comes from the word drug («друг» – “friend”) and was used to describe the prince’s militia, which included his closest friends and battle comrades, themselves consisting of both military and civilian advisors. From the 12th century onwards, the druzhina became divided. The “best” druzhina included boyars (the aforementioned close friends) and advisors, who always supported the prince in battle (by the way, the word boyar/boyarin itself originates from the word 'boi' – “battle” in Russian); meanwhile, the molodshaya druzhina – or the “junior” druzhina – included the wider military, which also participated in battles, but didn’t take part in councils and other types of governance. In case of the prince’s untimely demise, the druzhina could be disbanded, or even become subservient to the victor. With the founding of the Moscow state, the concept became outmoded, and was replaced by a boyar-based organization. 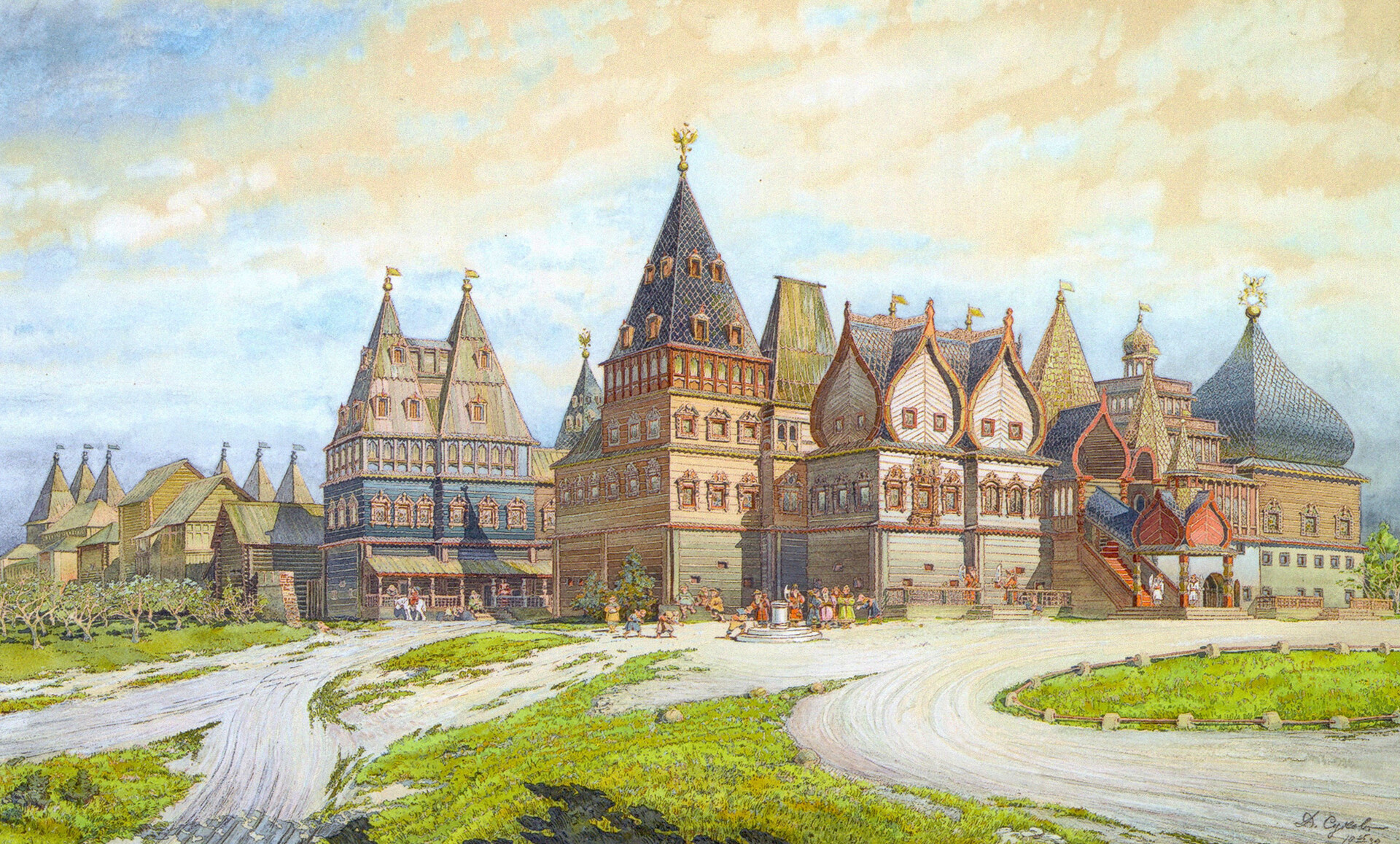 The Palace in Kolomenskoe, a 1932 reconstruction

The khoromy were large wooden constructions, consisting of a great number of kleti, connected by corridors or passageways. These khoroms were inhabited by tsars, boyars and various nobility. If these buildings consisted of stone, they were no longer khoromy, but palaty (“rooms/halls”). There was never any concrete planning in a khoroma. It was considered that – the more unique each khoroma was, the better. Tsar or prince khoromas, for example, were constantly rebuilt and added to. The relative chaos and constant reconstruction were supposed to aptly demonstrate the might and wealth of the owner. 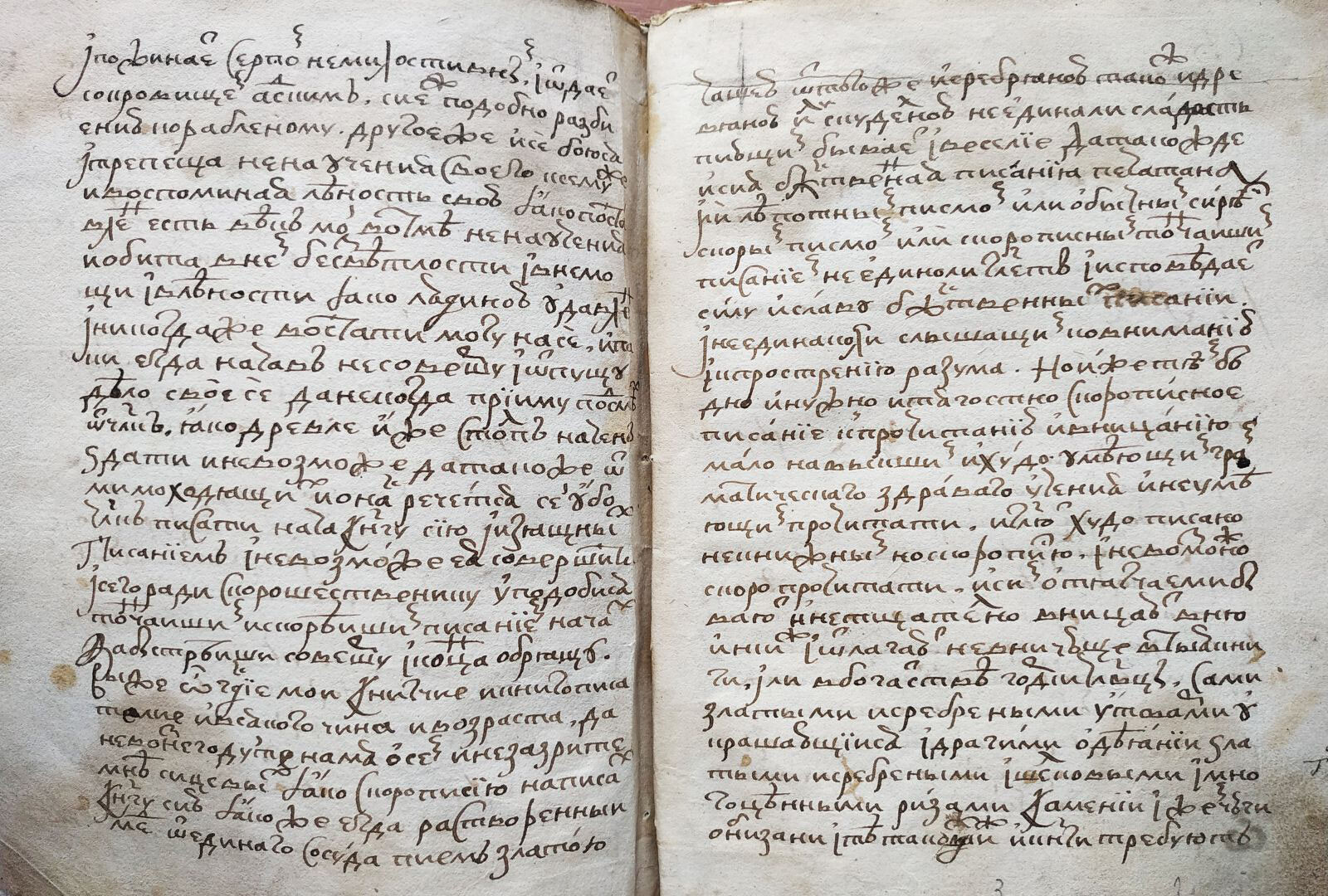 In modern Russian, a ryad is either a word for the physical concept of “row” (as in a theater) or a “sequence” (of things or events). However, in Old Rus', the word stood for an “agreement/contract”. A ryad could be forged between two social equals, or, say, between a ruler and his militia or civilian population. This agreement would be solidified in the presence of witnesses – or poslukhi, whose names were outlined in a special document. 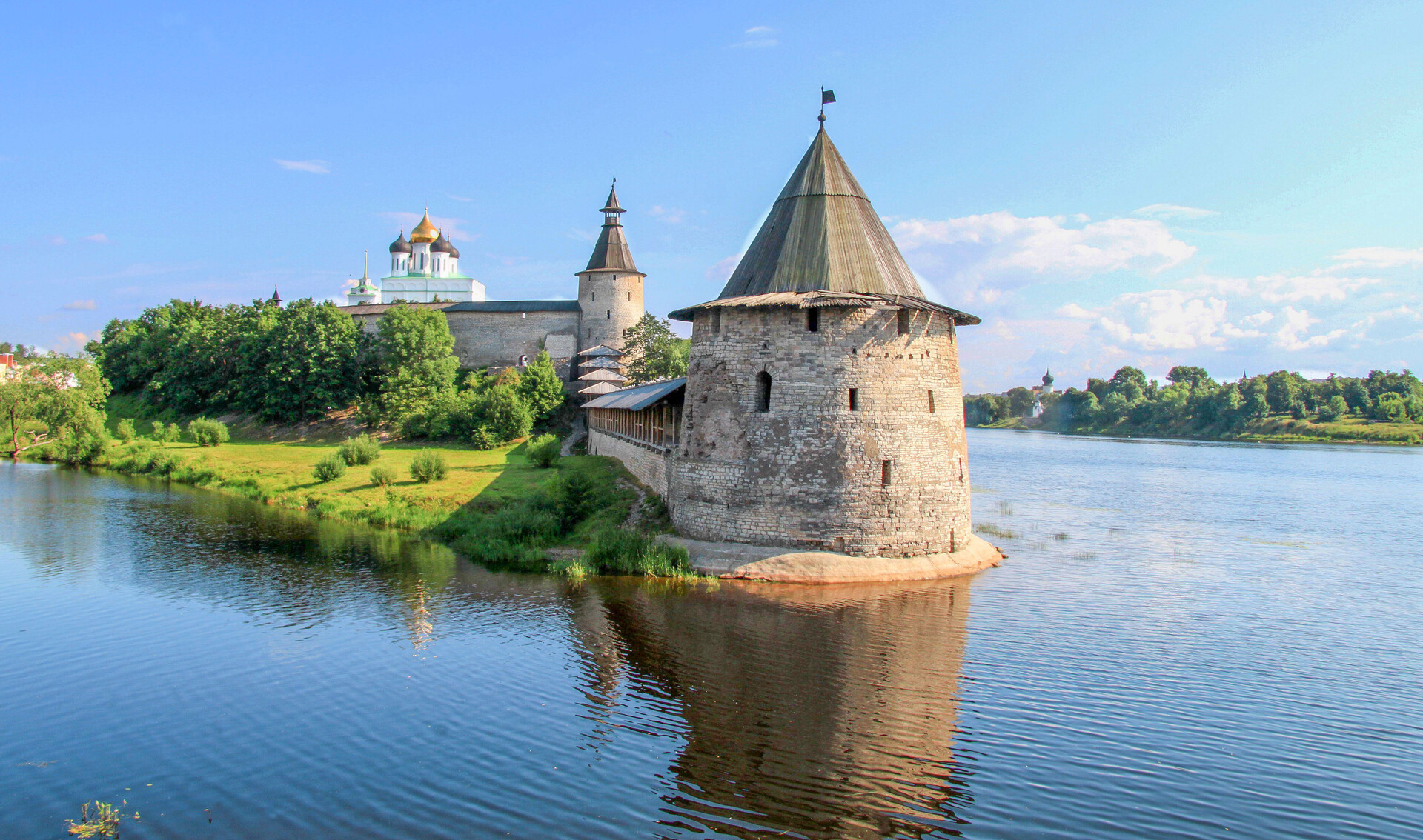 The Krom in Pskov, Russia

The word krom in old Rus' implied a fortified structure that served a defensive purpose. It is one of the oldest words in the Russian language, and harkens back to the proto-Indo-European word 'krom' – loosely, “fence/border”. It is this word that eventually gave birth to Kreml, which you know in English as “Kremlin” – the word used to describe any fortress in old Russia. Some old fortresses even retained the name, and are referred to even today as kroms and not kremls. 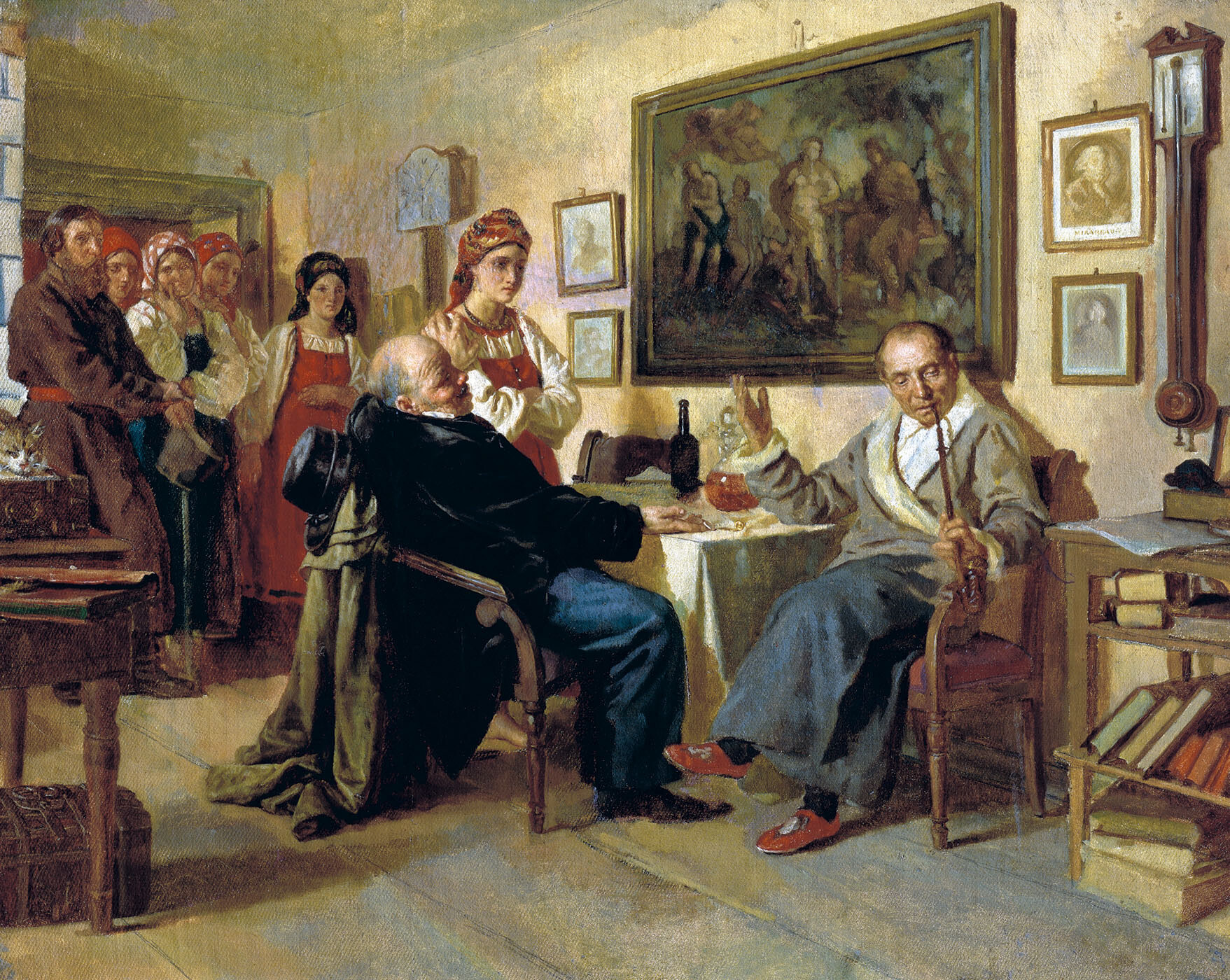 A barin in old Rus' used to be any senior individual – a wealthy person or someone notable in society. The word actually comes from the aforementioned boyarin – however, the latter could only be used to refer to a member of a prince’s council, while a barin was just any wealthy land and peasant owner. The word also gave birth to barshina – compulsory work that peasants did for their barin. 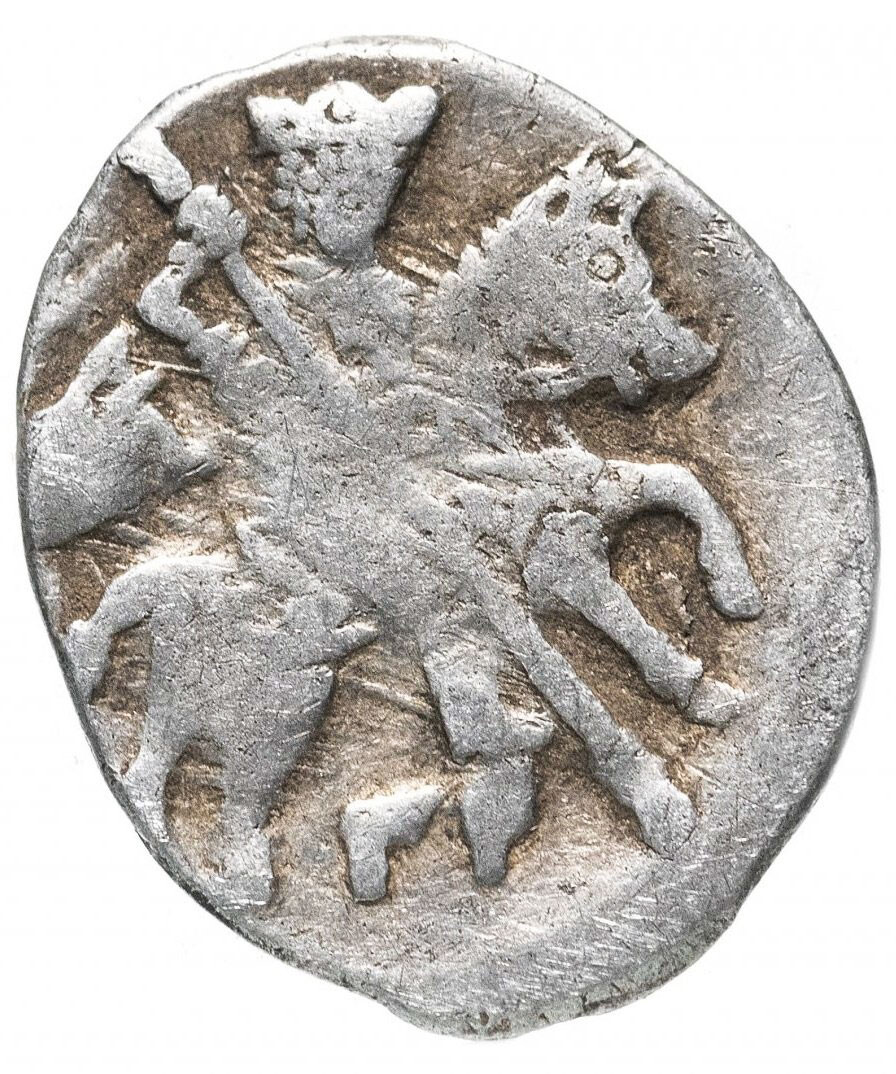 Kopeyka in old Rus' is – as it is today – a kopek, or just any small change. To this day, 100 kopeks is equal to one ruble. In 1535, the first coins appeared, showing a man on horseback, carrying a spear – or kopyo: that is how we arrive at the word kopeyka. And the humble kopeyka always had a special place in Russian culture – hence the saying: “Kopeyka rubl berezhot” – literally “the kopek preserves the ruble”. There are even several monuments to the tiny denomination in Russia. And despite the fact that the small coin is hardly ever seen anymore in modern Russia, it is still kept in circulation.