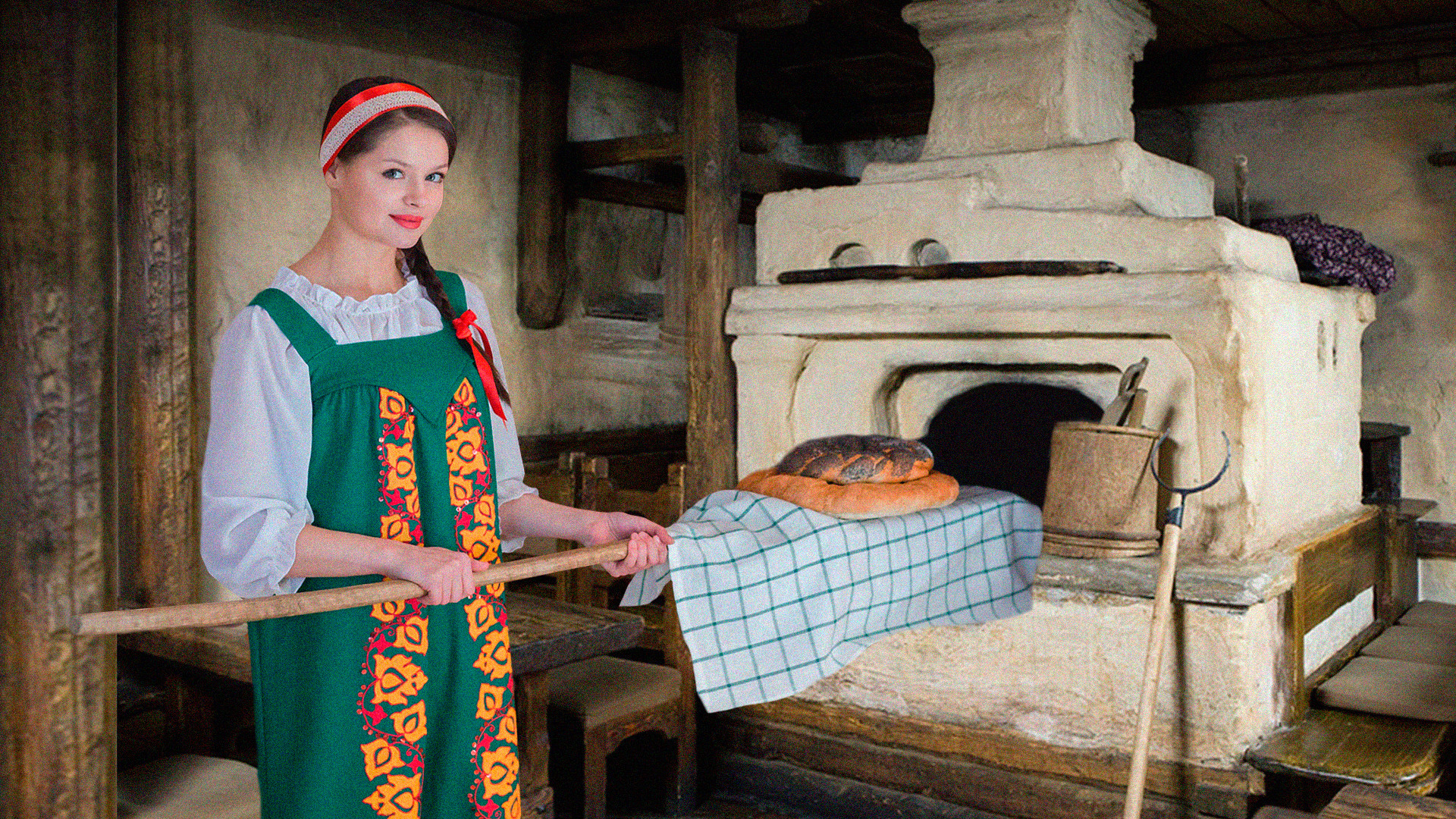 Legion Media
The Russian stove has always been more than just a source of heating. It is an element of culture, a sleeping place, a character in fairy tales and the focal point in a traditional Russian house. Find out who was fond of lying on the stove, in which part of the stove the household spirits lived and why unmarried girls hid behind the stove.

The two most famous Russian fairy tale characters - Ilya Muromets and Yemelya - are inextricably linked with the Russian stove. The former lay on a stove for 33 years until he was endowed with magical heroic powers and sent to fight evil. The latter never left the stove and rode it like a convertible. The stove entered folklore for a reason: Practically until the middle of the last century, it was the focal point around which Russians’ everyday life revolved.

The heart of the house 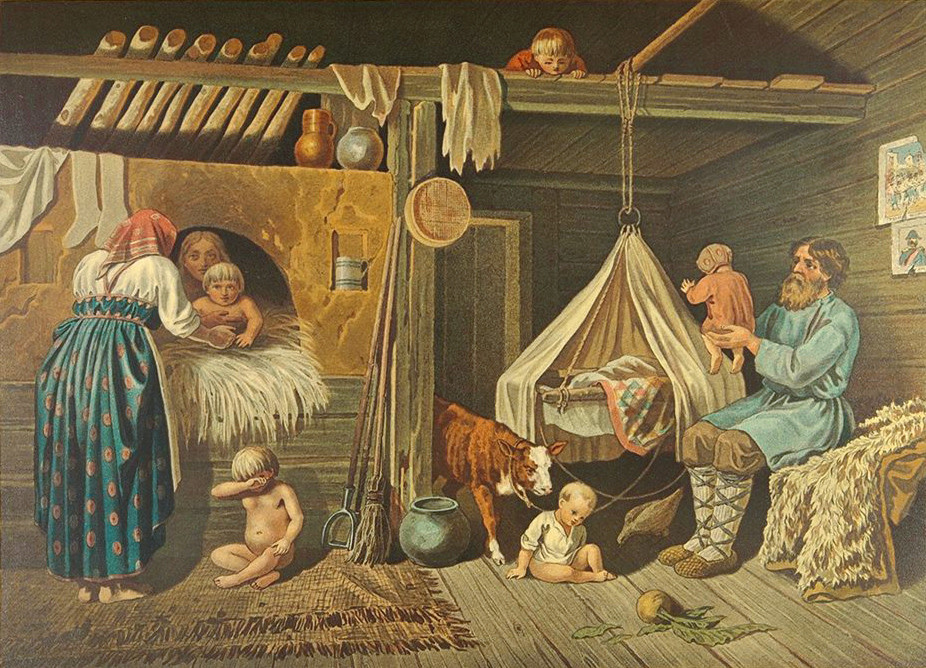 Peasants in their house during winter

The stove is the warmest place in a house. To lie on it, feeling warm and cozy and for once idle was the ultimate dream for a peasant. During the winter months, that was the place where peasants spent most of their time. Interestingly, the place on the stove was reserved only for men: either the head of the family or an elder. Whereas women’s job was to keep the stove warm, cook and do other household chores. As for children, they were allowed to climb onto the stove only for a short time, for fun, and only with the permission of adults.

The stove features in numerous Russian literary works like, for example, in Maxim Gorky’s My Childhood:

“I slept on the floor between the stove and the window. There was not enough room, so I had to put my feet in the oven and the cockroaches used to tickle them. This corner allowed me not a little malicious enjoyment, for, when cooking, grandfather was continually breaking the window with the end of the oven-rale, or the poker…” 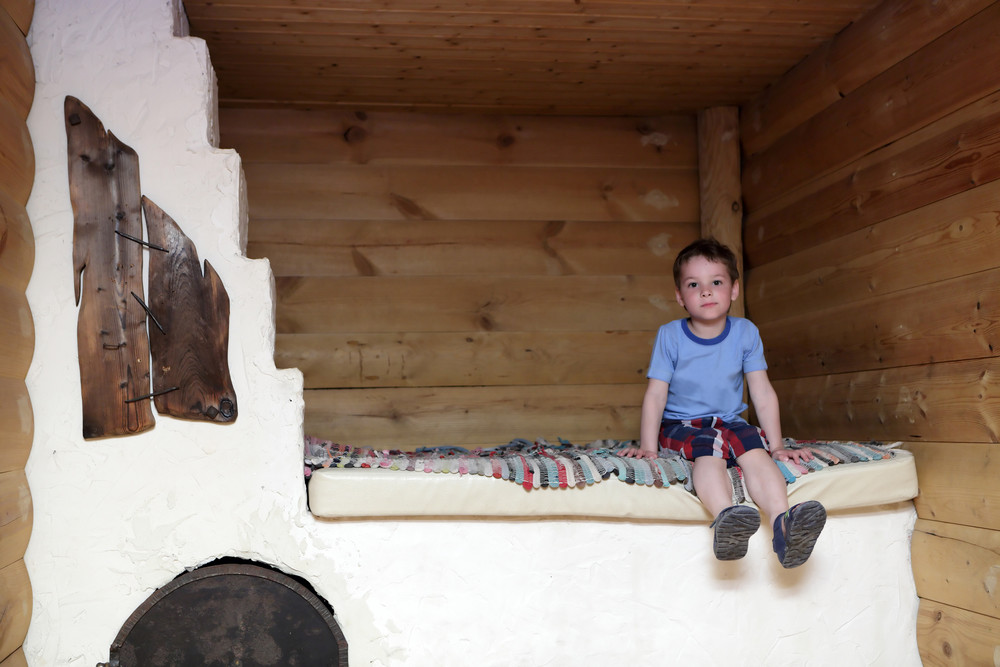 The stove usually had a “women’s corner”, known as a kut, where men were not allowed in. That was where dishes were kept and where women did their needlework. Often, the kut was separated from the main part of the hut by a special curtain. It was behind that curtain that brides hid before their wedding, women gave birth and breast-fed.

When building a new hut, the first thing to do was to design a stove, and only then everything else. Hence the Russian expression “to dance from the stove”, meaning to begin at the beginning. The stove features in many Russian proverbs, for example: Станешь лежать на печи, так не будет ничего в печи (“If you keep lying on the stove, there will be no food in it”); Хочешь есть калачи, так не лежи на печи (“If you want to eat rolls, don’t lie on the stove”). 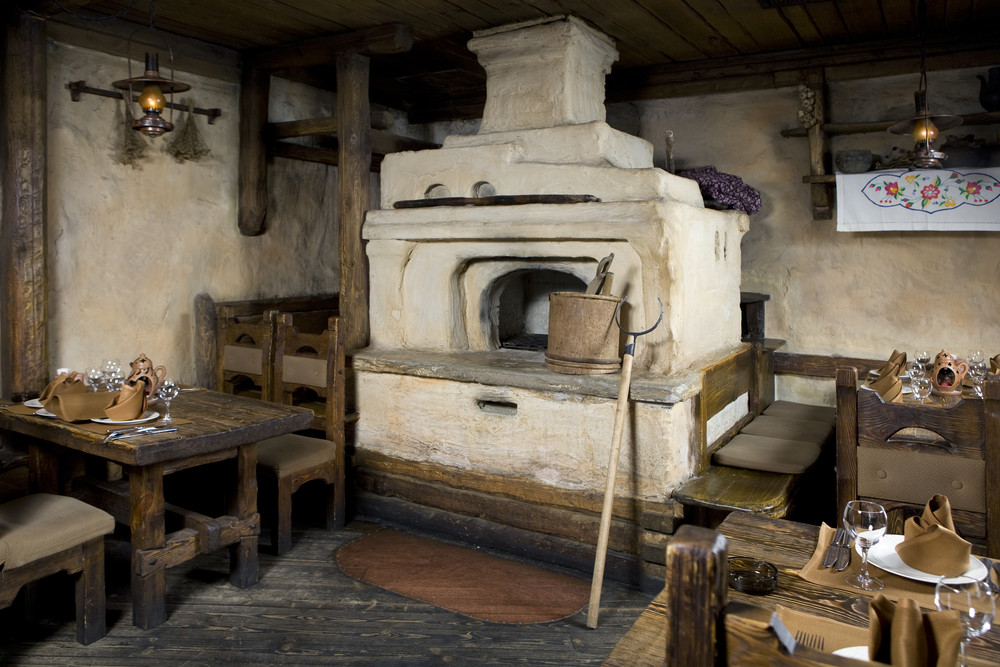 The Russian stove developed its familiar look approximately in the 15th century. In different parts of the country, stoves could differ in terms of what they were made of (stone or clay) and what fuel they used (mostly firewood, but it could also be dung cakes, straw or peat).

The stove is the main element of the interior in a traditional Russian house. Old stoves could occupy almost half the room. Wooden benches that were used for sleeping were stretched from the stove to the opposite wal.

Stove building was an important element of Russian life. Stove-makers were much in demand and enjoyed much respect, as their job required a lot of knowledge and skill.

The main part of the stove is the hearth, or the combustion chamber, where the firewood is burnt. The hearth was also used for cooking: clay or cast-iron pots were put inside the hearth when the stove was still burning. It was usually done with special oven forks, which can be found in any Russian ethnography museum. Some stoves had hearths large enough to have a bath inside. 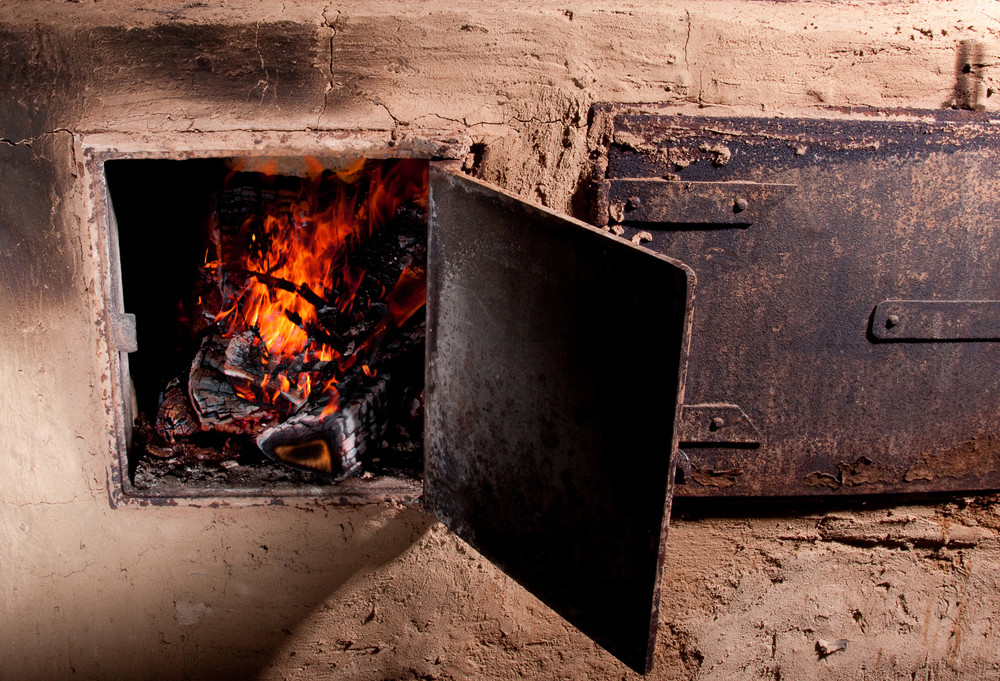 Directly under the hearth is a special recess, known as hearth bottom, where bread was also baked. Dough was put inside when the stove was still hot to get a crispy crust, and was left inside when the fire was already out until it was ready. Stoves were also used for preparing baked milk (click here to find out more about this unique Russian drink).

The sleeping place on the stove (known as perekryshka) was usually located right under the ceiling, where the air was the warmest. Even when the fire was already out, the stove would take a very long time to cool, so food and water could be heated in and on it. Usually, there were small niches in the stove that were used for drying or storing food, like mushrooms or herbs, or for putting away clothes or shoes. 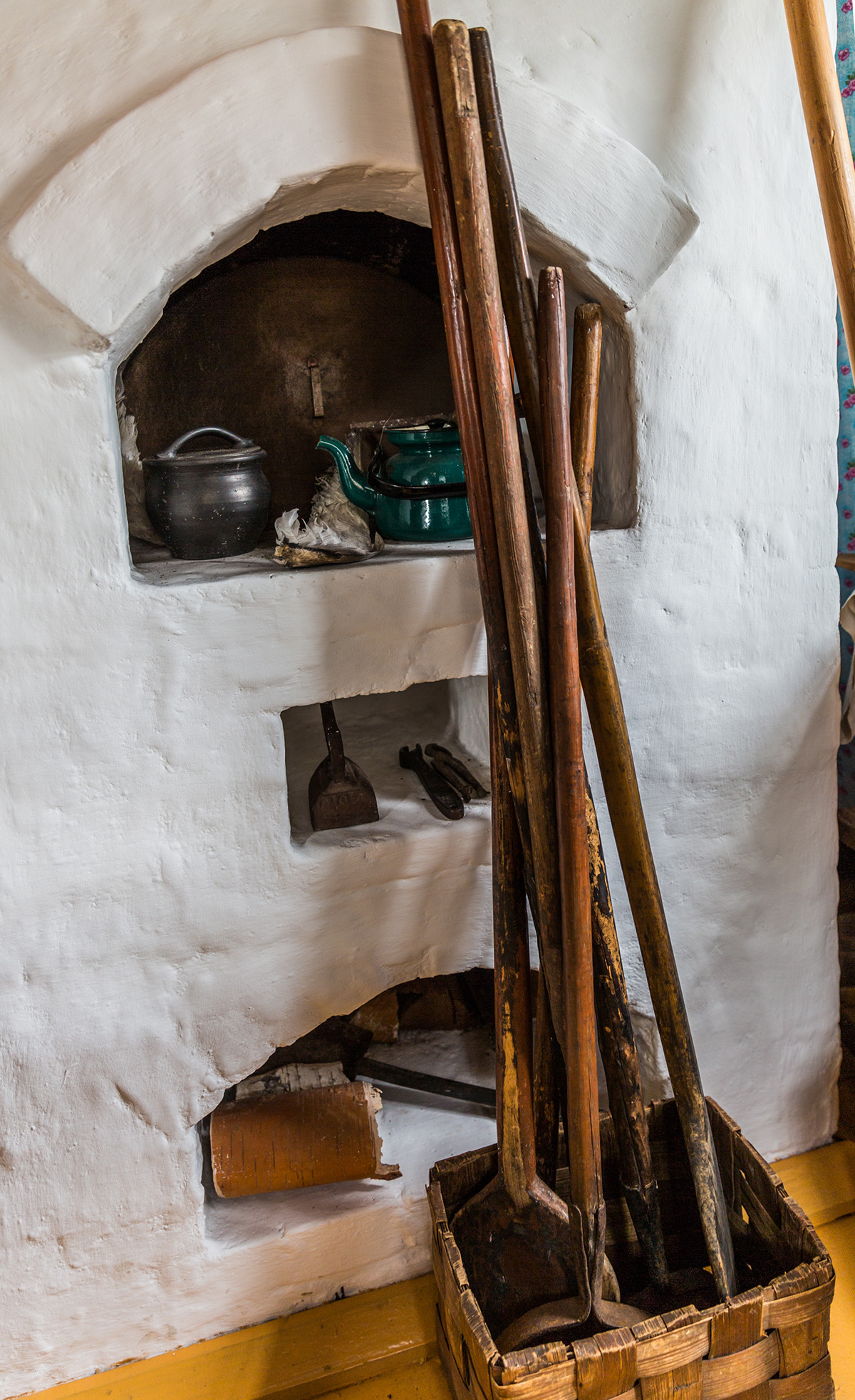 Firewood, a poker and other appliances were usually kept by the fireside, which was also the favorite place of mice and cockroaches. That was also where various unused items were usually stored.

In well-to-do households, stoves were decorated with painted clay tiles. This craft became particularly popular in the late 19th and early 20th century, with the fashion for the so-called ‘Russian Style’. This decorative element still remains popular. Click here to find out more about Russian stove tiles.

Mystical and practical significance of the Russian stove 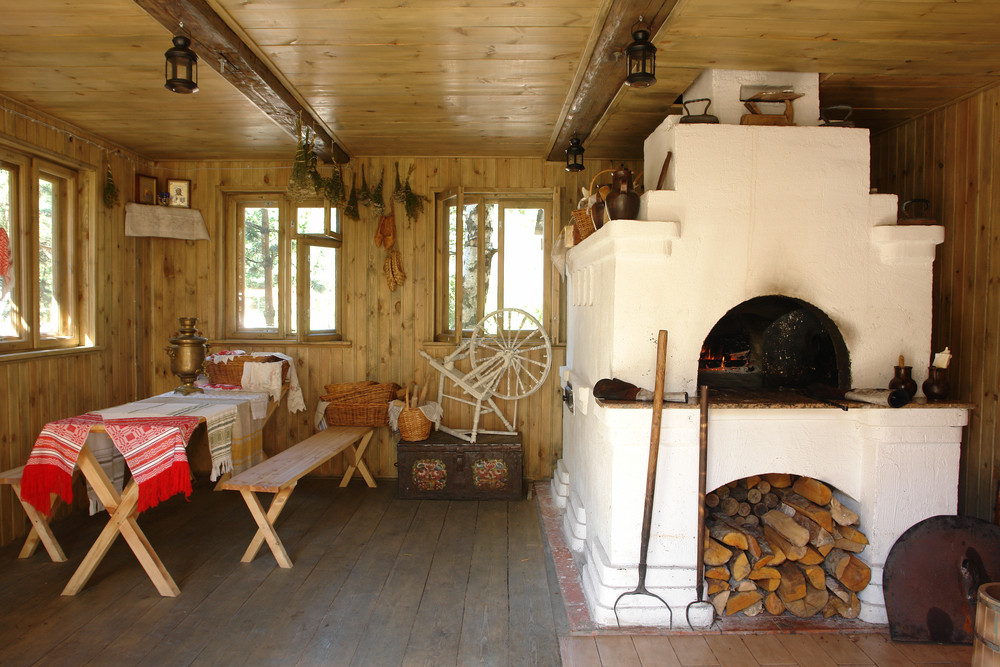 Superstitious Russian peasants believed that household spirits lived behind or under the stove. It was believed that stoves could heal, so sick people would lie on a stove in the hope of a speedy recovery. Also, stove steam was used for inhalations, as it was believed to possess medicinal properties. Stove ash was not thrown away but used for making ointments, decoctions as well as for more mundane purposes, as soap and bleach for clothes.

Stoves were lit with the onset of cold weather: from October till April or May. Russians always had many signs and superstitions about the weather, and stoves were one of the sources of their weather forecasts. If the draft was strong or the fire red, one could expect frosty weather. Whereas, if the firewood was burning quietly and the fire was white, a thaw was on the cards. 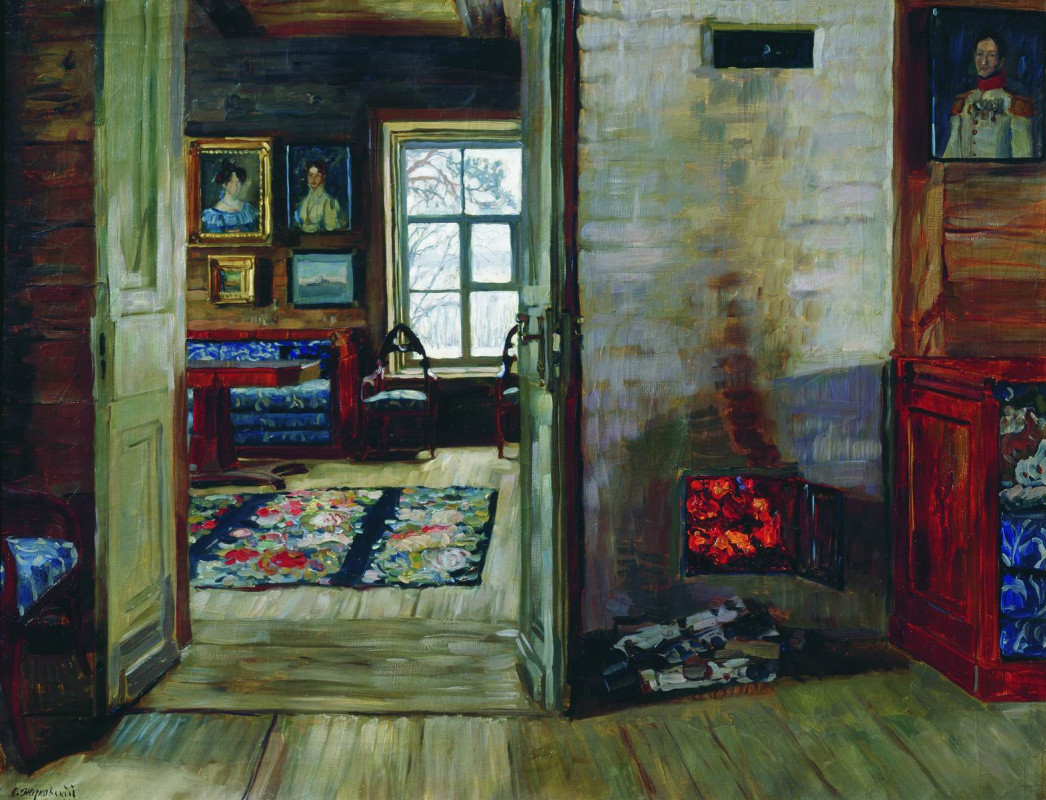 Stanislav Zhukovsky. In an Old House

From the mid-19th century, massive Russian stoves began to give way to compact Dutch brick stoves. The latter not only took up less space, but had a much simpler design. One could not lie on them, but they had a small platform on top for preparing food, like a cooker.

These days, the traditional Russian stove has become a rarity and can only be found in museums. Whereas, its smaller and simpler Dutch variety is still in use in villages today.