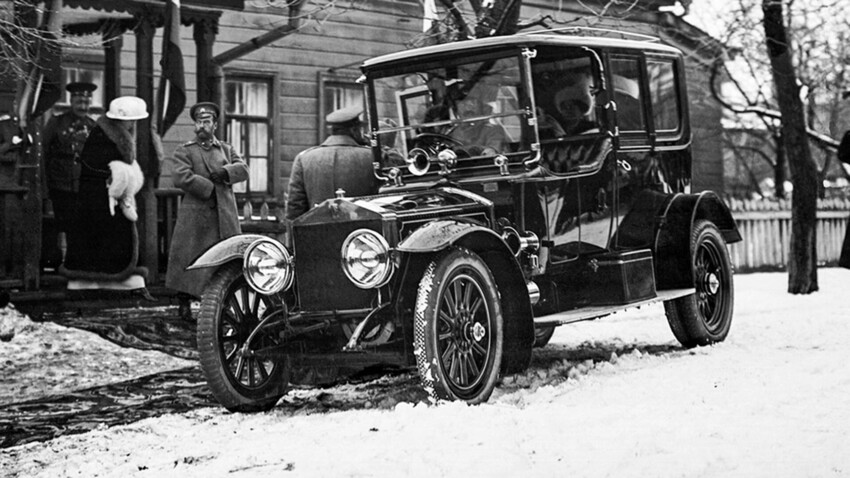 Public domain
Despite being a bit reluctant about cars at first, Emperor Nicholas II quickly developed a strong liking for motor vehicles – and squandered copious amounts of money to get the best cars.

The first time Nicholas II was officially acquainted with a motor vehicle was in 1896, when he visited The All-Russia industrial and art exhibition in Nizhny Novgorod. But he didn’t pay much attention to it, preferring wine tastings at Prince Golitsyn’s pavilion instead. The first vehicle Nicholas II rode in was a steam-powered ‘Serpollet’ that broke down almost immediately. 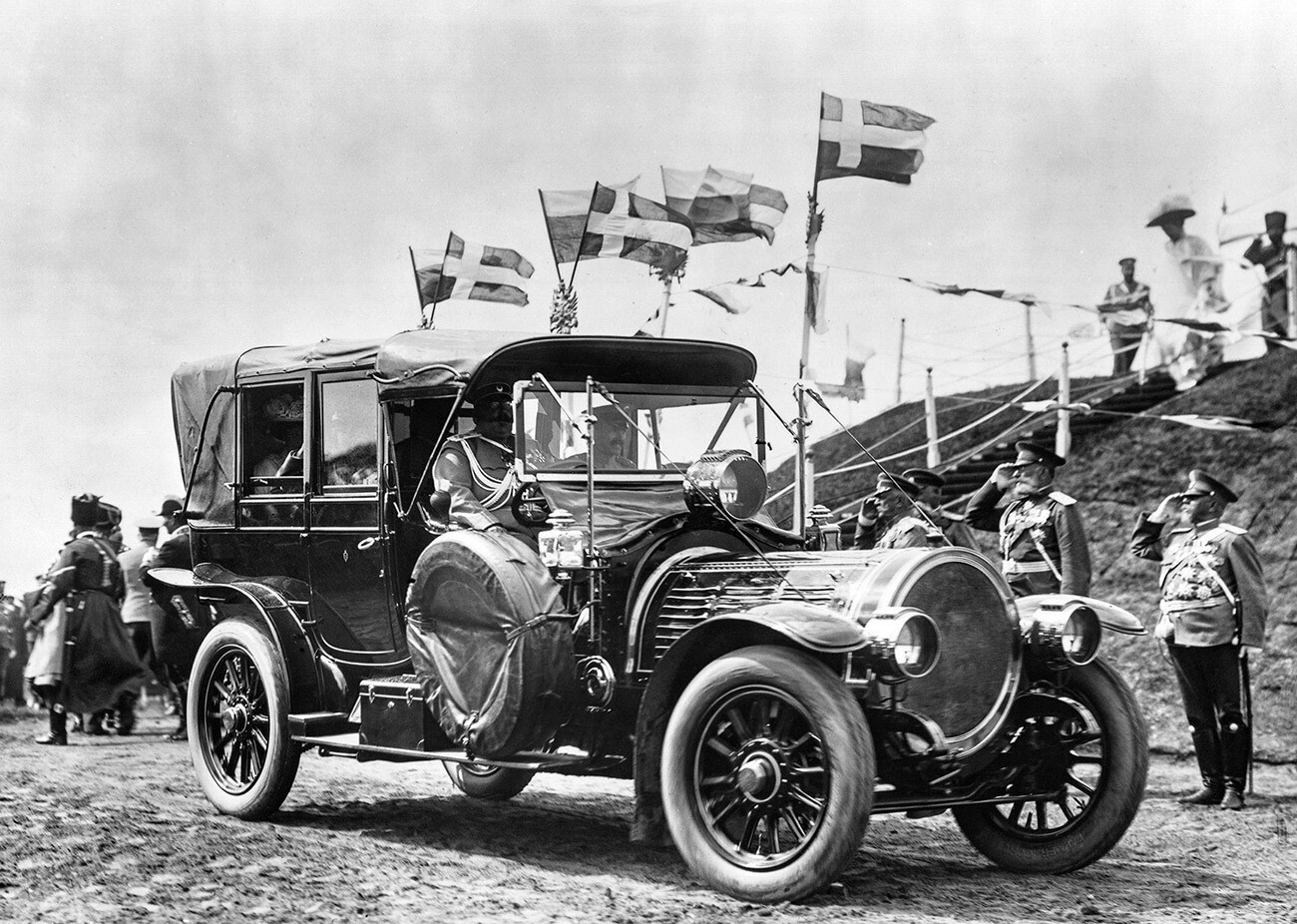 One of the 'royal' Delaunay-Bellevilles

Only in 1904 did Emperor Nicholas experience his first actual car ride. First, his brother, Grand Duke Mikhail, and then, Prince Vladimir Orlov, a member of the Emperor’s entourage, took Nicholas II for rides in their cars – Prince Orlov, for example, took the tsar for a spin in his posh Delaunay-Belleville, one of the most expensive cars of the time. 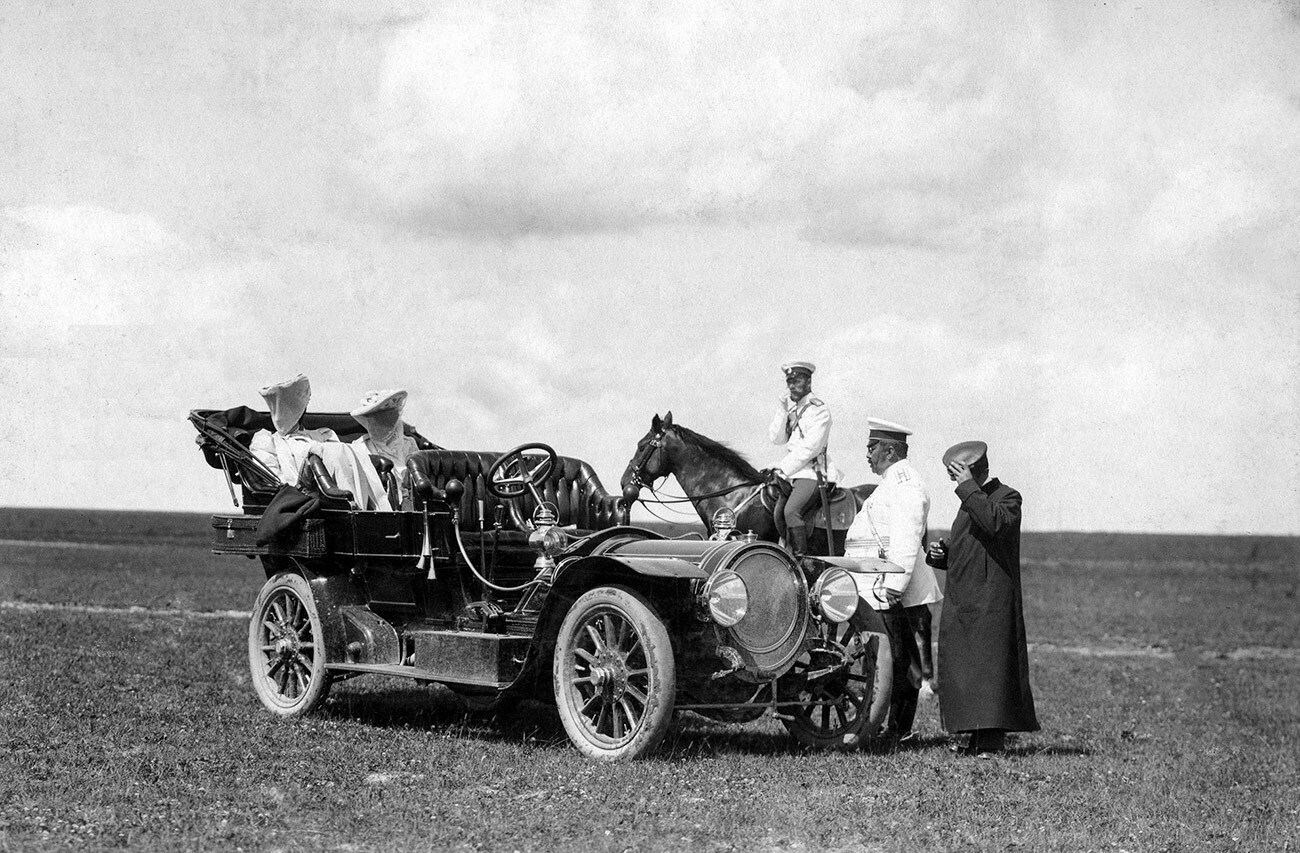 Nicholas II (on a horse) next to his Delaunay-Belleville

“We did not have a single accident with pedestrians; of course, I was always extremely careful, because I believed it was impossible for the tsar’s car to hit his subjects,” Prince Orlov remembered. 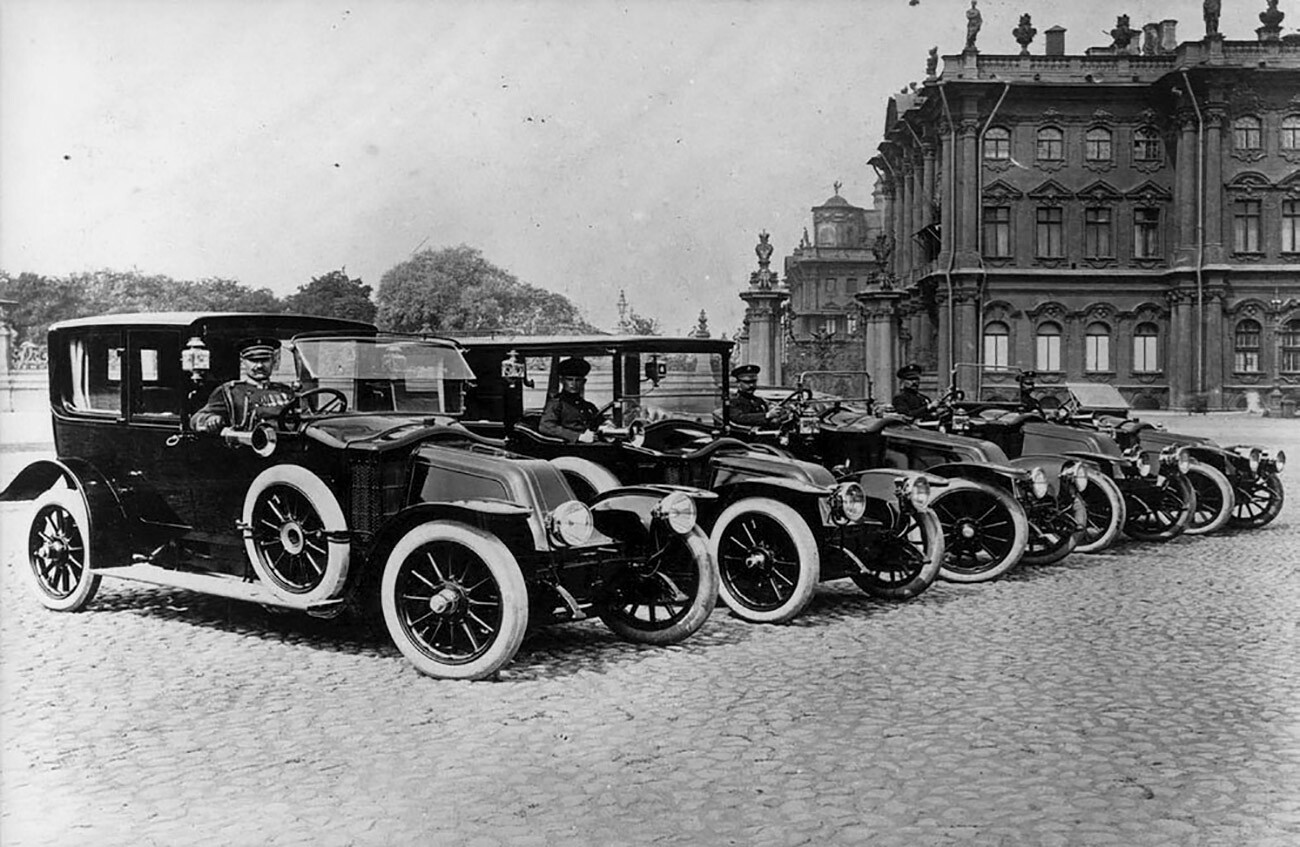 Renault cars from the Emperor's garage, at Dvortsovaya square in St. Petersburg

Soon, the rides started happening daily. In 1905, Nicholas wanted to have his own car park. “We cannot continue to abuse Orlov’s kindness. Buy two or three cars and instruct Orlov to do it, he understands this better than any professional,” Nicholas II wrote to his executives. 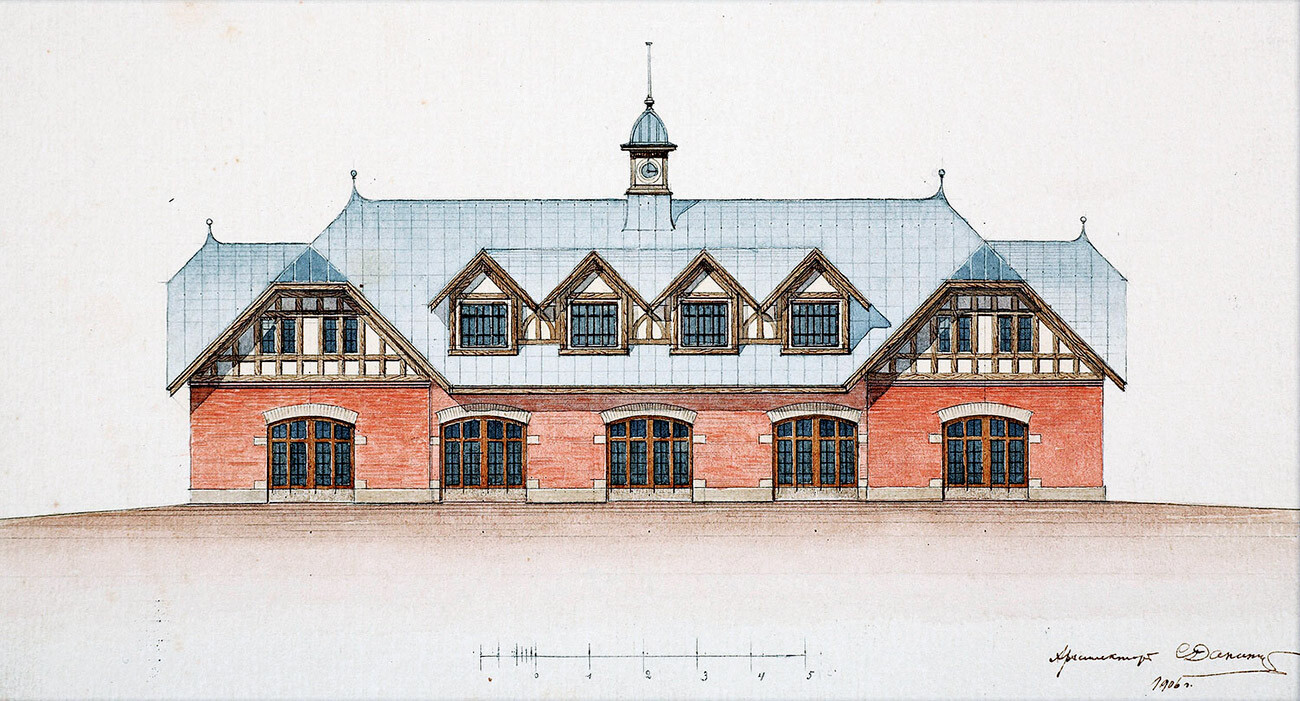 A design for the garage in Tsarskoe Selo, 1906

In 1905-1906, garages were built in Tsarskoe Selo and Peterhof, two summer residences of the Imperial Family. Four Mercedes Benz cars were bought initially for the Emperor and his family, then more cars were purchased. 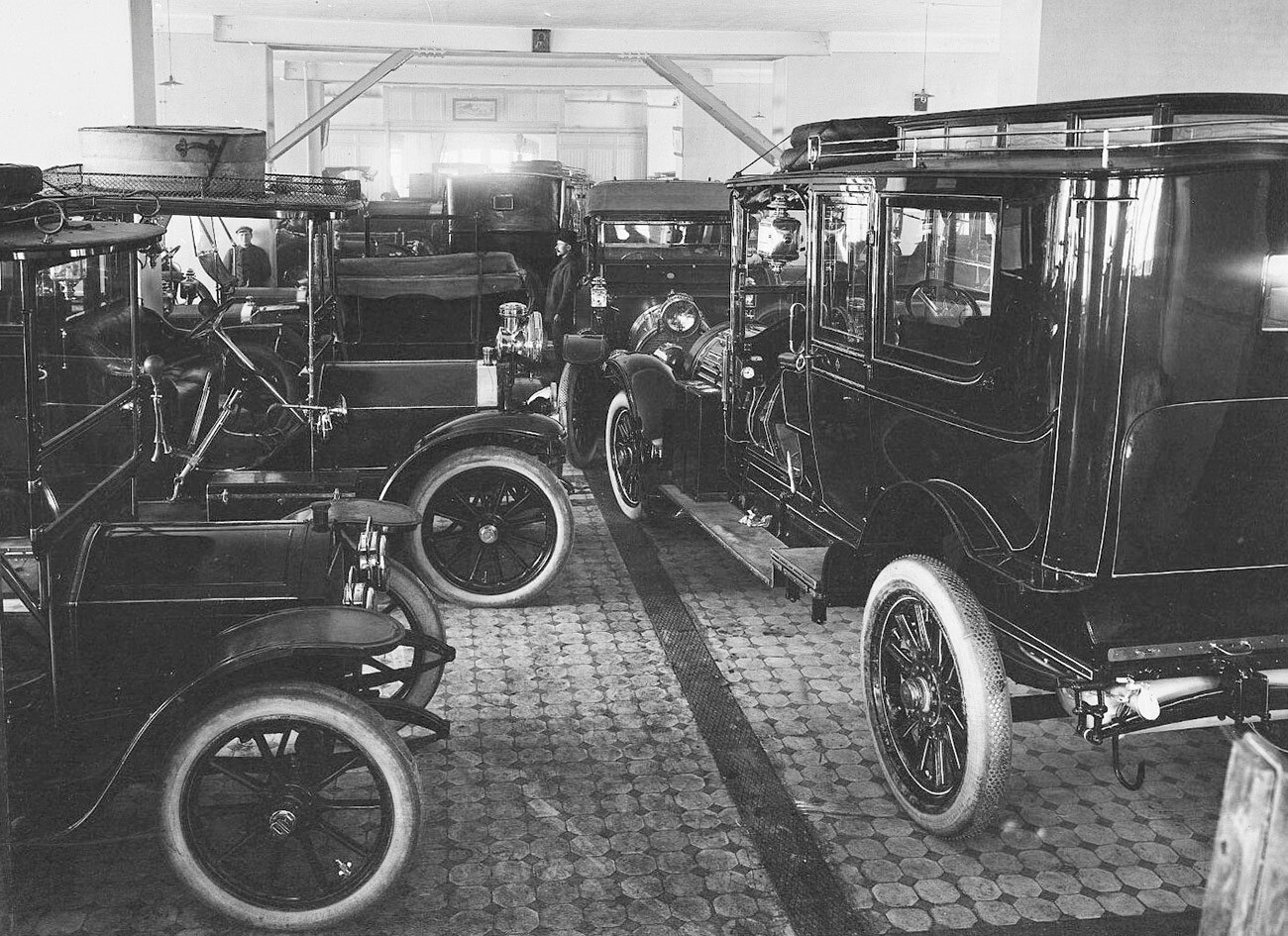 Cars in the Emperor's garage

By the end of 1906, over 100 thousand rubles were spent on cars alone – a huge sum when considering the annual pay for a government minister was just about 1,000-1,500 rubles. 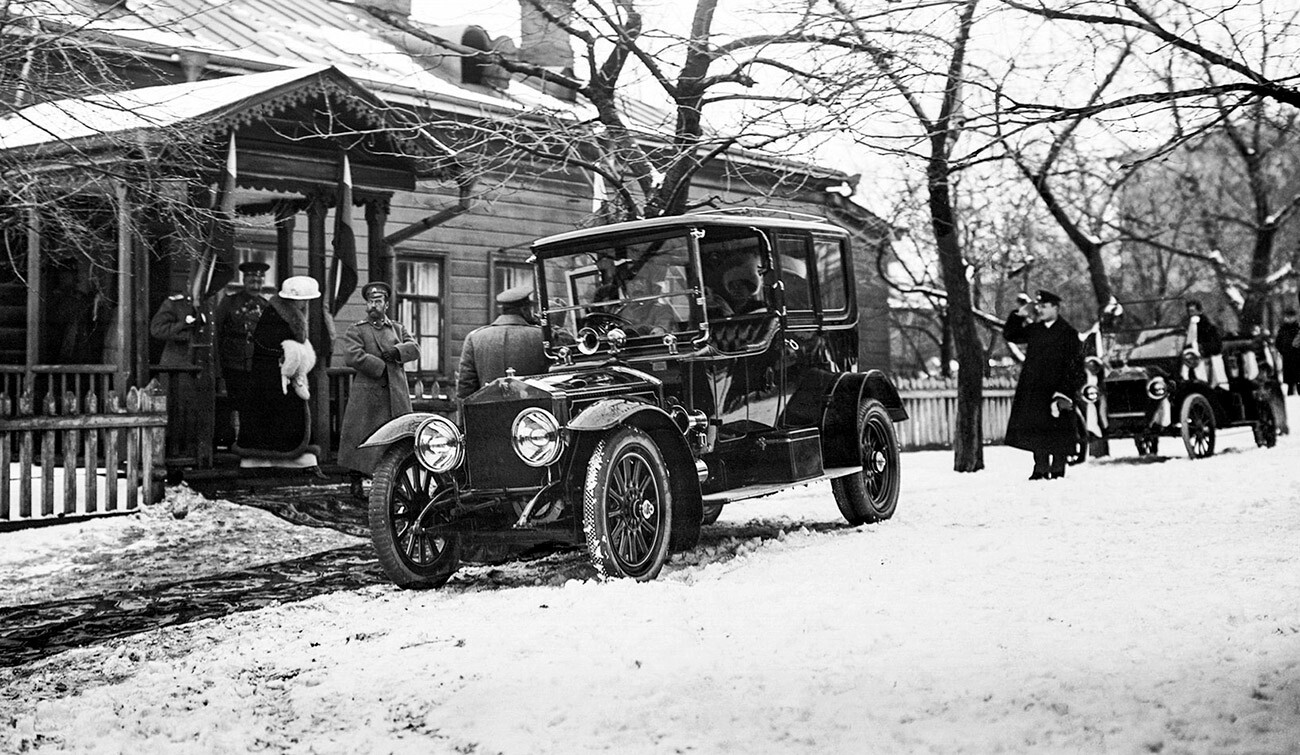 Nicholas II and his Rolls-Royce

In 1907, ‘His Imperial Majesty’s Own Garage’ (official name) was established as a part of the Ministry of the Imperial Court. Only top-notch cars were bought for the Emperor: Мегсеdes Benz, Delaunay-Belleville, Renault, Peugeot were some of the brands among the tsar’s rides and, in 1911, two Rolls Royce ‘Silver Ghost’ cars were bought. 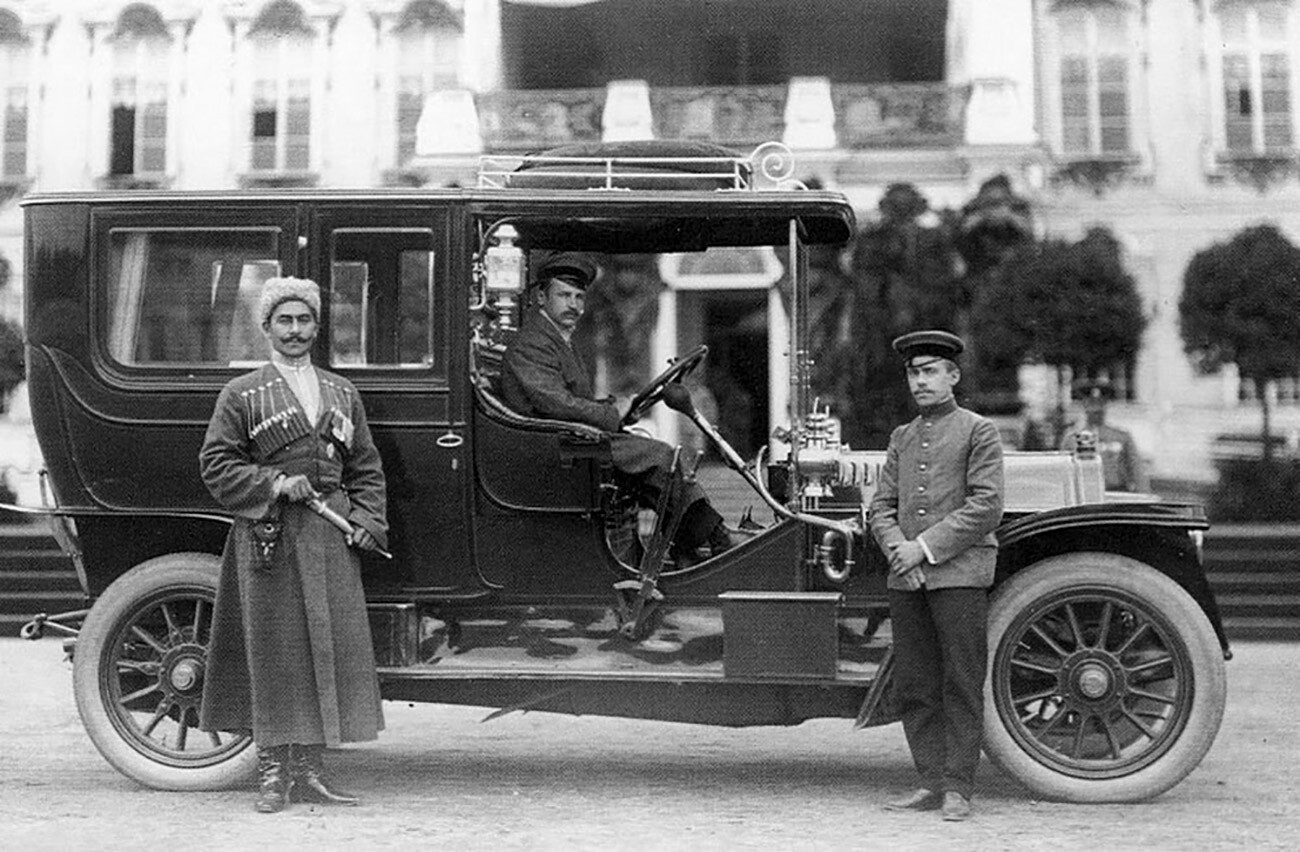 Nicholas II's "Mercedes-Benz" with Adolphe Kégresse behind the driver's wheel 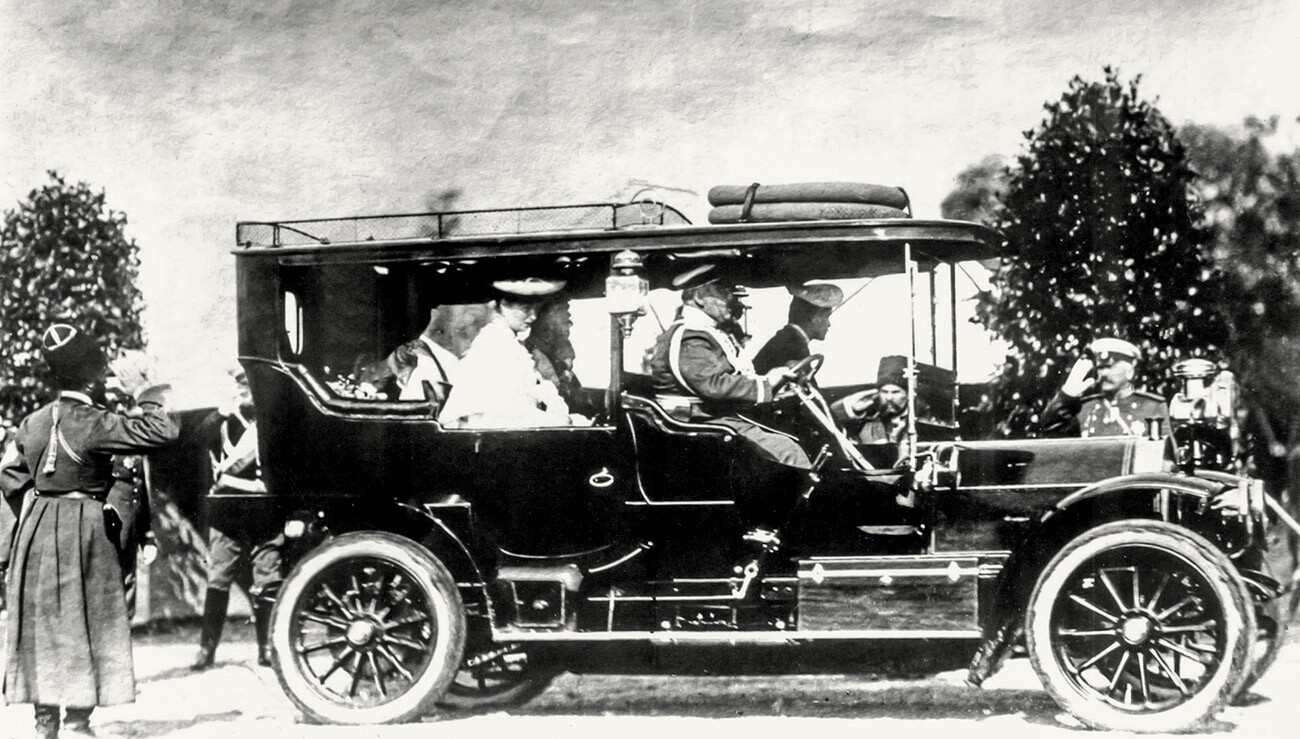 A car with Empress Alexandra Fedorovna in the back seat 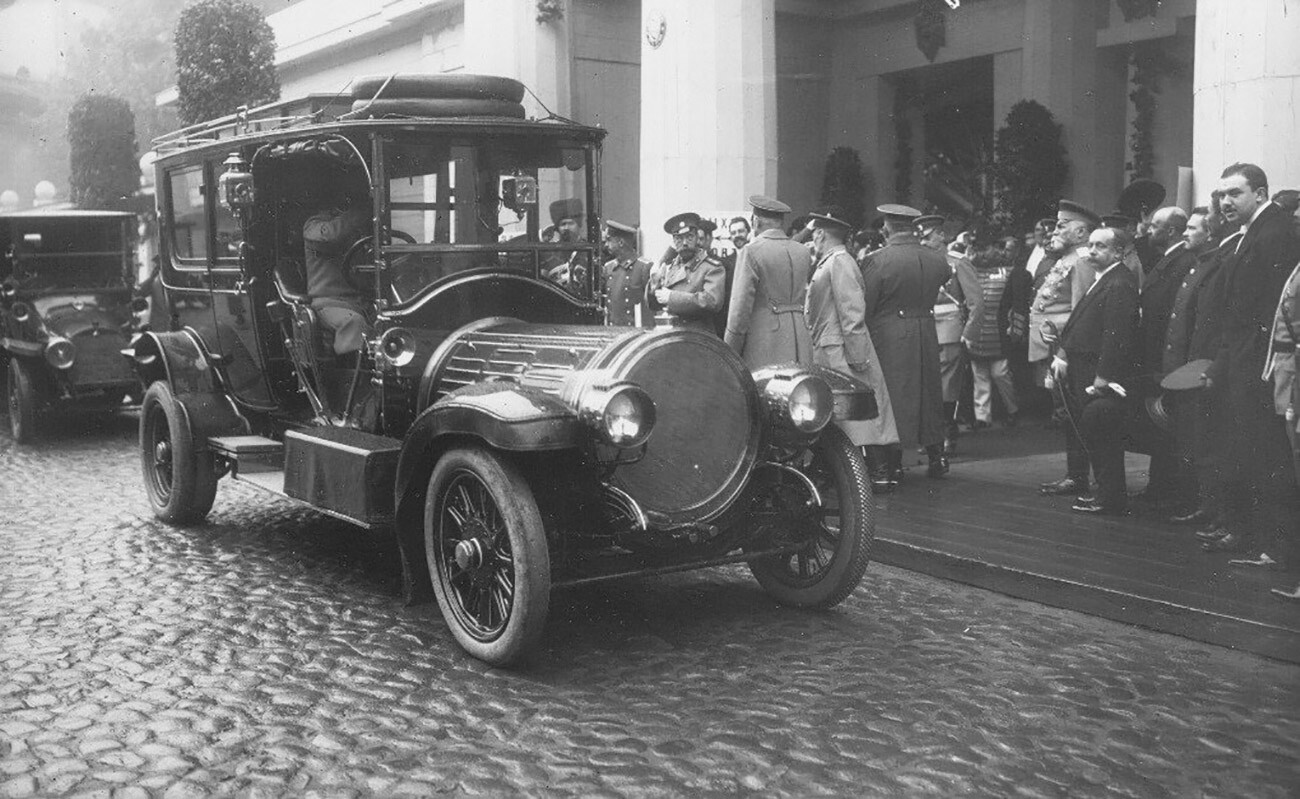 The emperor’s personal Delaunay-Belleville car was probably the most expensive car of the time. It was 5.5 meters long and over two meters tall – specially made higher than a usual Delaunay-Belleville, so that the Emperor could stand upright inside, as he liked to do when he rode past the soldiers of his army, or past the crowds of onlookers. 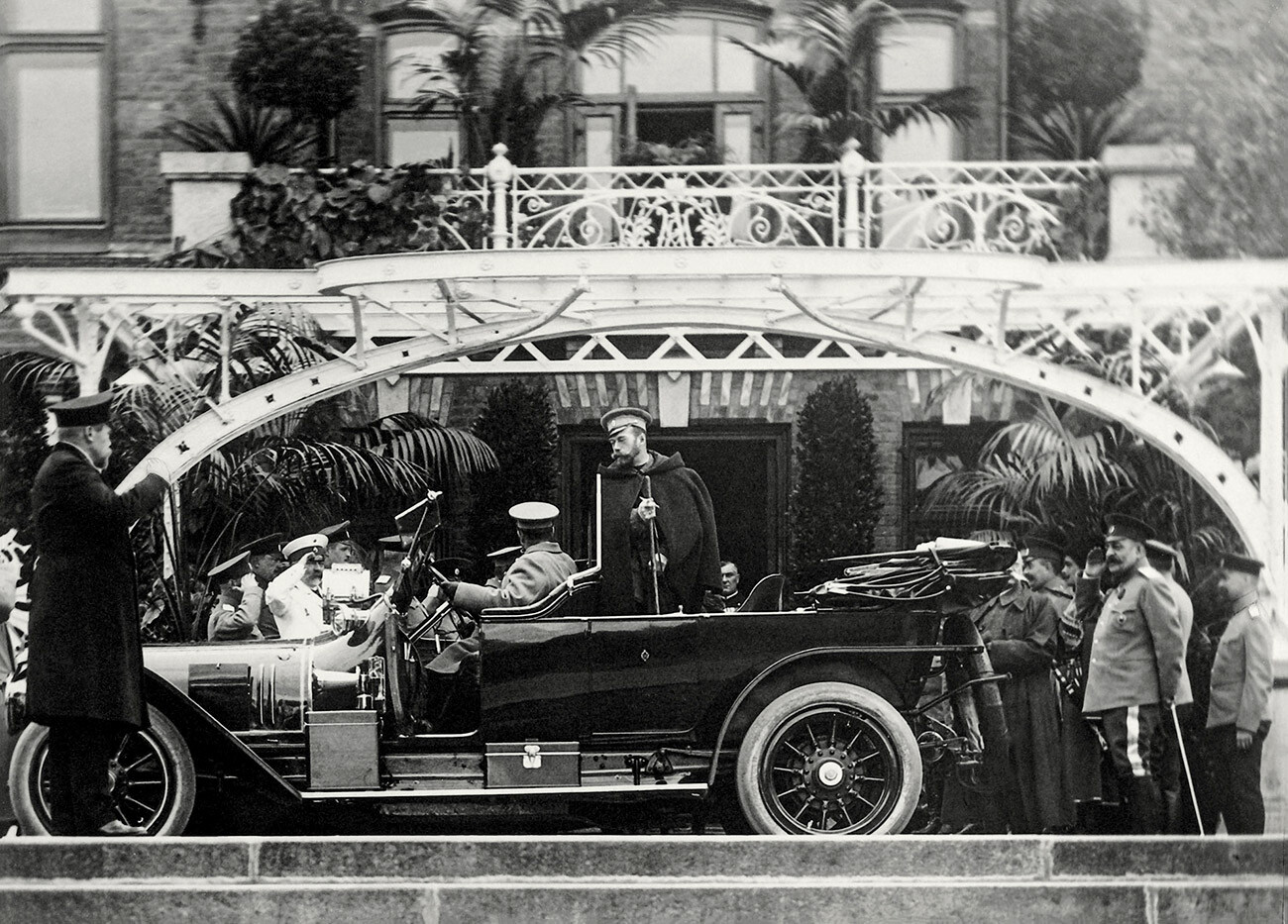 Also, Nicholas II insisted that all his cars must be “open” – cabriolet style, without a roof. Even though the tsar’s security was worried that in an open car, the tsar might be in danger of an assassination attempt, Nicholas was firm in his belief that “the people should be able to see their sovereign”. 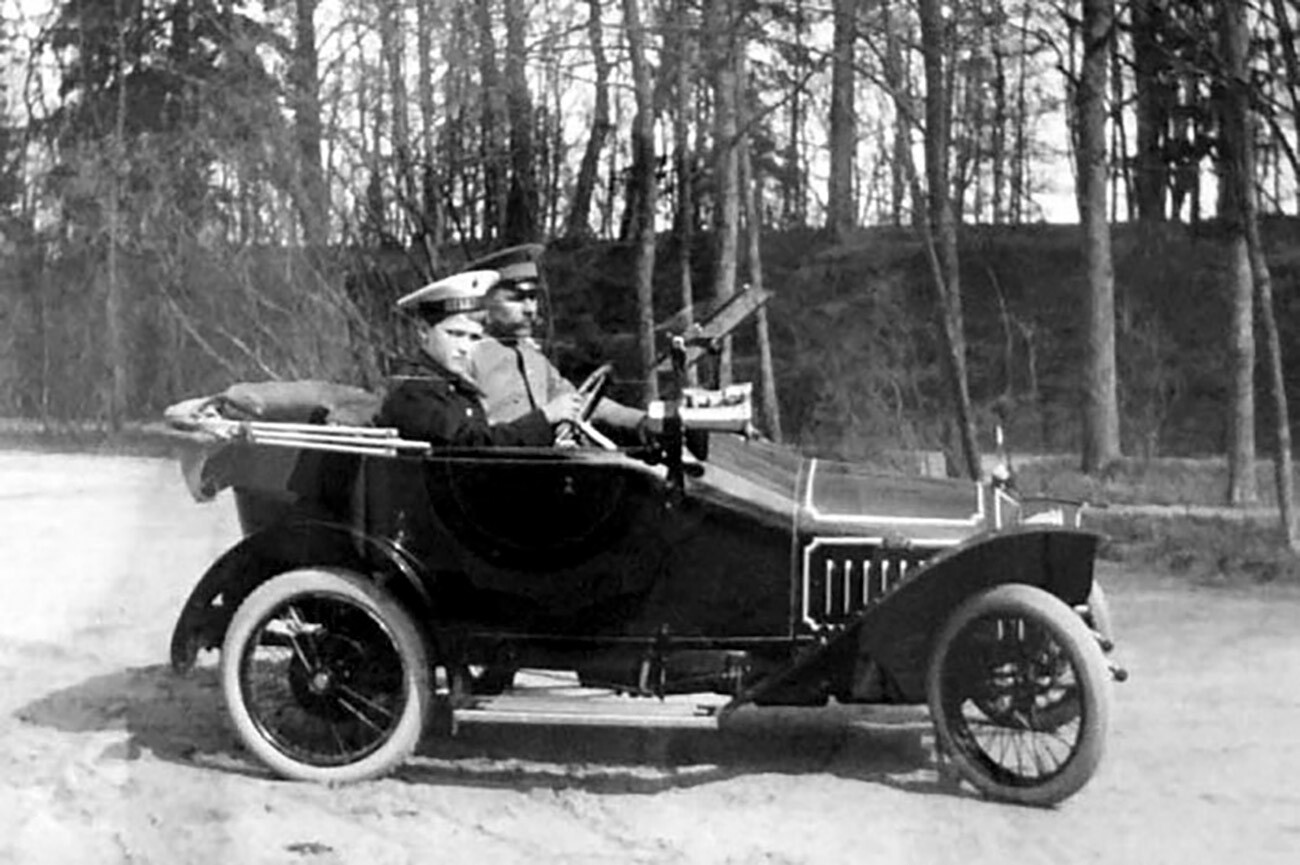 The Peugeot Bebe with Tsarevich Alexey in the passenger seat

Little Tsarevich Alexey, the heir to the throne, also had his own little car – a ‘​​Bebe’ Peugeot, that was 2.4 meters long and 1.1 meter wide. He rode mostly with a driver, at a low speed, in the Tsarskoe Selo park. 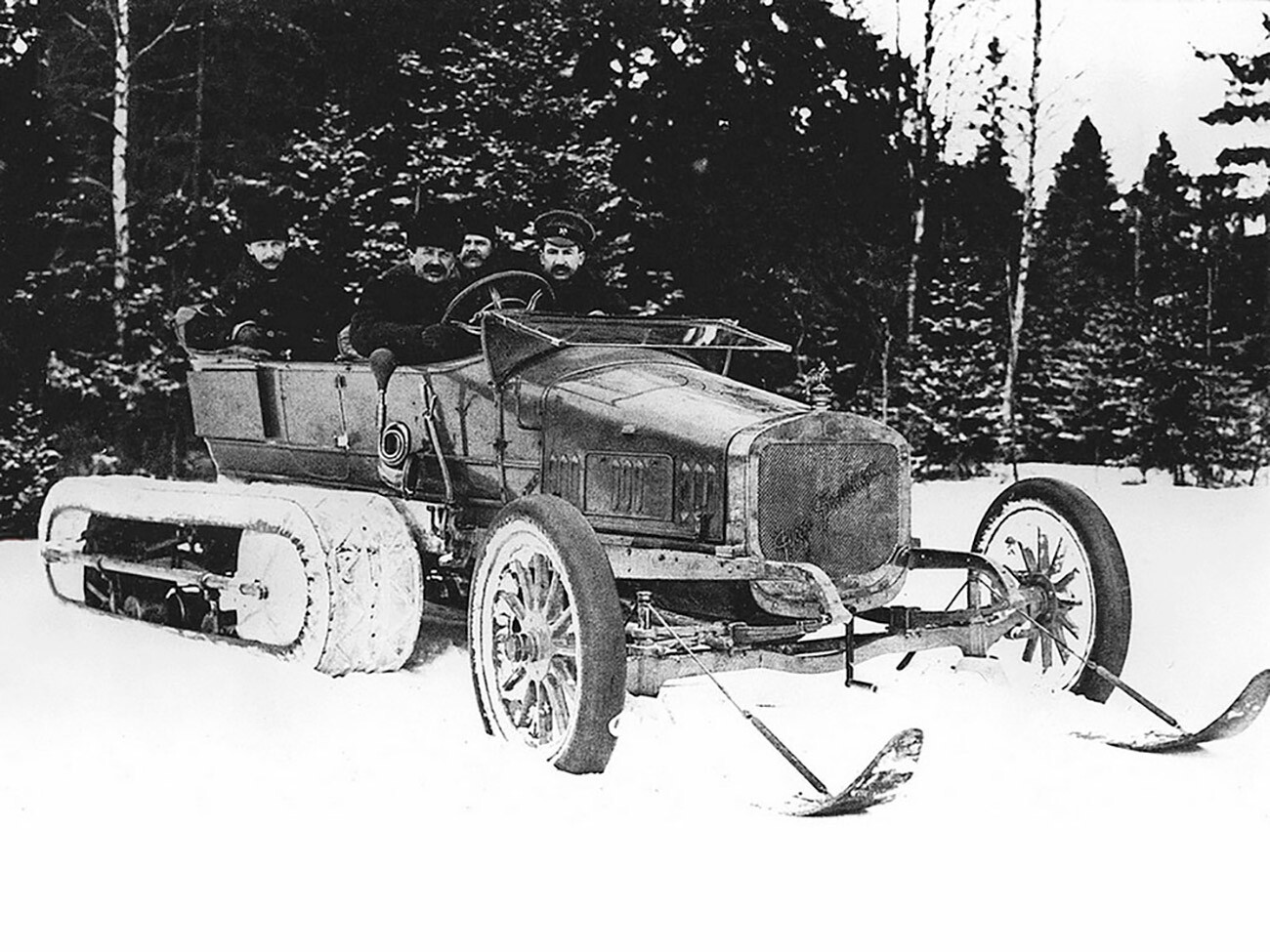 The half-track designed by Adolphe Kégresse

Adolphe Kégresse, one of the tsar’s drivers, was also an engineer. He invented a special mechanism called ‘Kégresse’ track – an appliance that can be attached to a car to turn it into a half-track – it turned out to be quite useful for traveling through snowy Russian countryside.