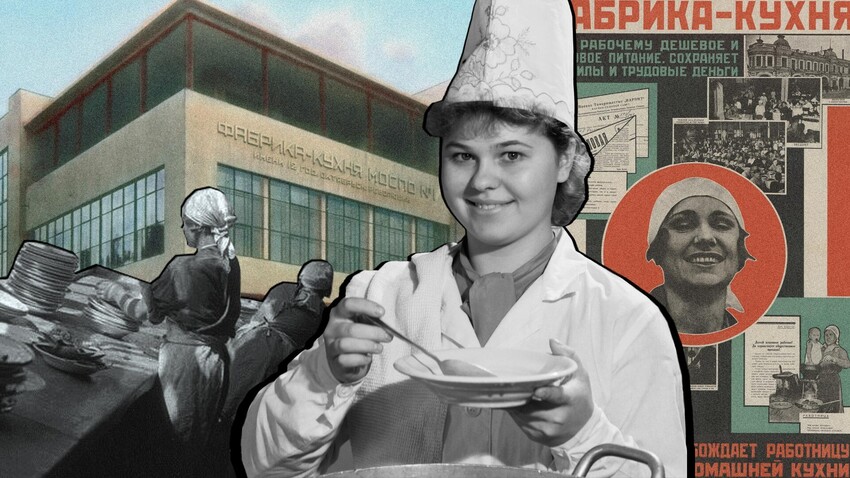 Kira Lisitskaya (Photo: Public domain; Alexandre Rodchenko/MAMM/MDF/russiainphoto.ru; Iosif Budnevich, Gennadi Kochkintsev/TASS)
In the late 1920s and 1930s, the USSR experienced a boom in the construction of factory-kitchens. Everything was done to make housework easier for female workers and to protect men from alcohol abuse.

In the 1920s, the Soviet government launched its industrialization program. New factories required a lot of workforce, including women. The ‘factory-kitchens’ project was born to establish centralized catering and to relieve female workers from cooking at home. In addition, the government fought alcoholism and believed that workers should spend less time at home, more time working and even spend leisure time together with other workers. And factory-kitchens were the preferable place for this. The factory-kitchen became a place to eat out, buy ready-to-eat meals and a place for cultural leisure activities - the buildings housed department stores, post offices, pharmacies, gymnasiums and libraries. 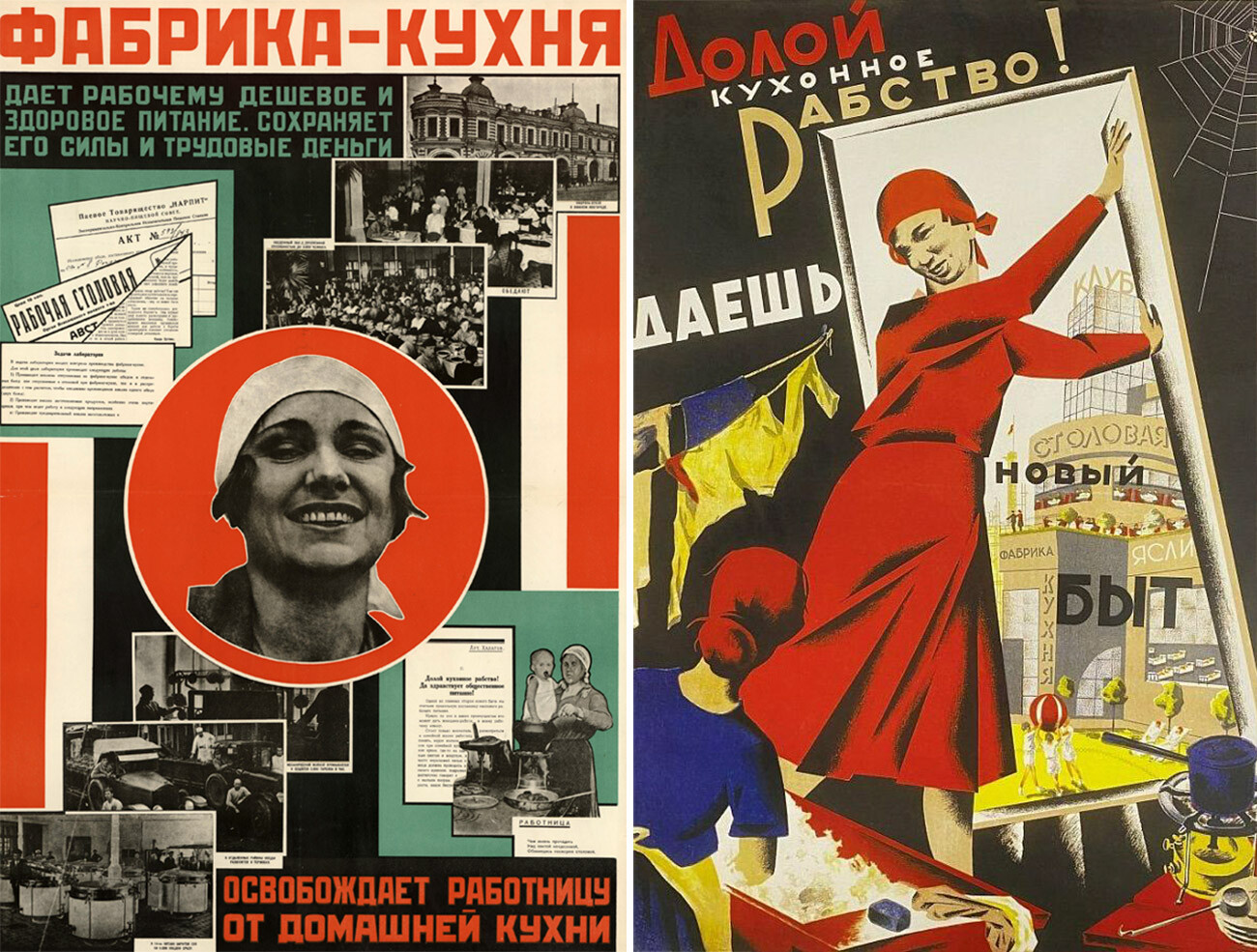 Posters "The factory-kitchen relieves the female worker from cooking at home" and "No more kitchen slavery!".

At first, factory-kitchens were housed in pre-existing buildings, but soon, an architectural program was developed to build separate structures. These were enormous complexes, which, by analogy with “palaces of culture”, were called “palaces of food”. 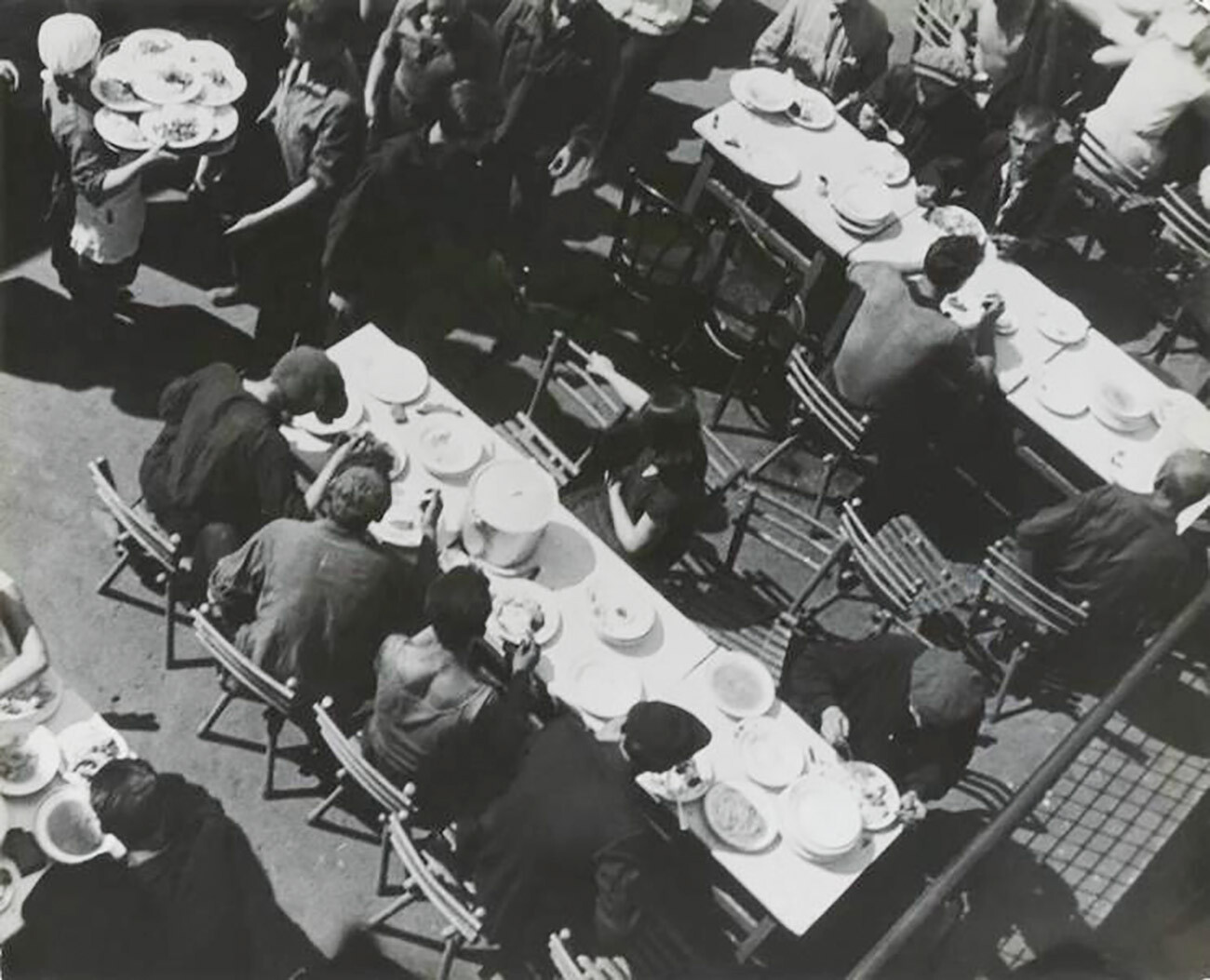 The height of a typical factory-kitchen building was three or four stories, with a basement containing refrigerators and a food warehouse. The buildings also had a semi-basement with a bakery and a staff room. The first floor housed production workshops, a laboratory, a cloakroom for visitors, a snack bar and a convenience store. Dining halls were on the second floor and banquet halls were on the third floor.

Factory-kitchens were built either with high floor-to-ceiling windows or with ribbon glazing. In both cases, the halls had to be bright for visitors to dine in natural light. This had aesthetic value and saved electricity. Factory roofs were built flat, so that tables and chairs could be placed there in the summertime. 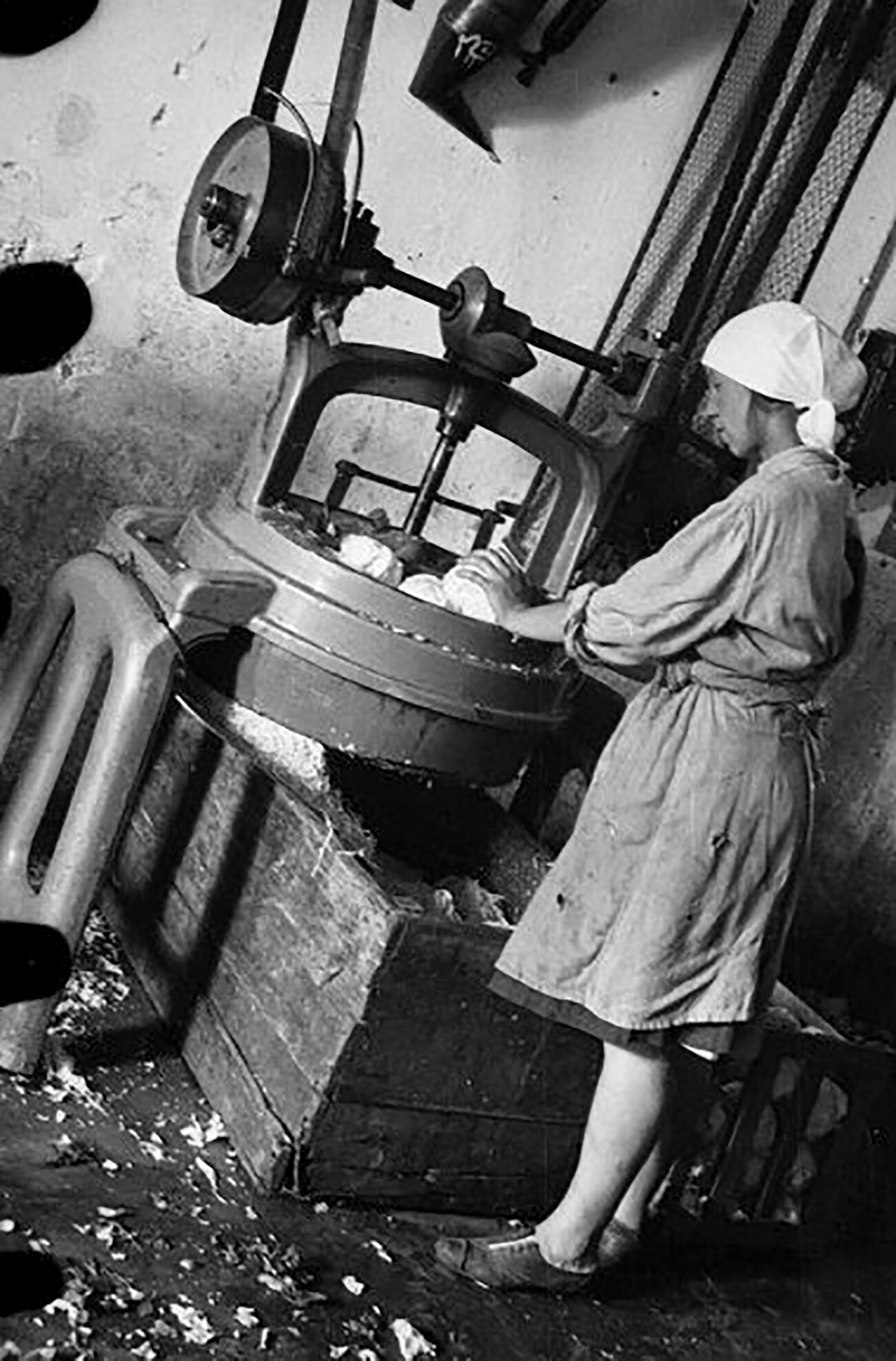 Workers in the canteen at Factory-kitchen No. 2.

The first factory-kitchen was opened in 1925 in the building of the former dormitory of a chintz printing factory in the city of Ivanovo-Voznesensk (present-day Ivanovo). This city is still known, not only for its many brides-to-be, but also for its textile industry. Leaving the facades unchanged, the interiors of the building were radically transformed. Equipment for cooking was purchased in Germany. Refrigerators, elevators, electric washers, dryers and bread cutters were installed.

In the late 1920s, the factory in Ivanovo served lunch to 600 people each day and also produced ready-to-eat meals for eight factory canteens. The People’s Commissar of Health at the time, Nikolai Semashko, called this factory-kitchen “a bomb thrown into the old way of life”. He recognized the project as a success and, soon, similar facilities began to open all over the USSR. 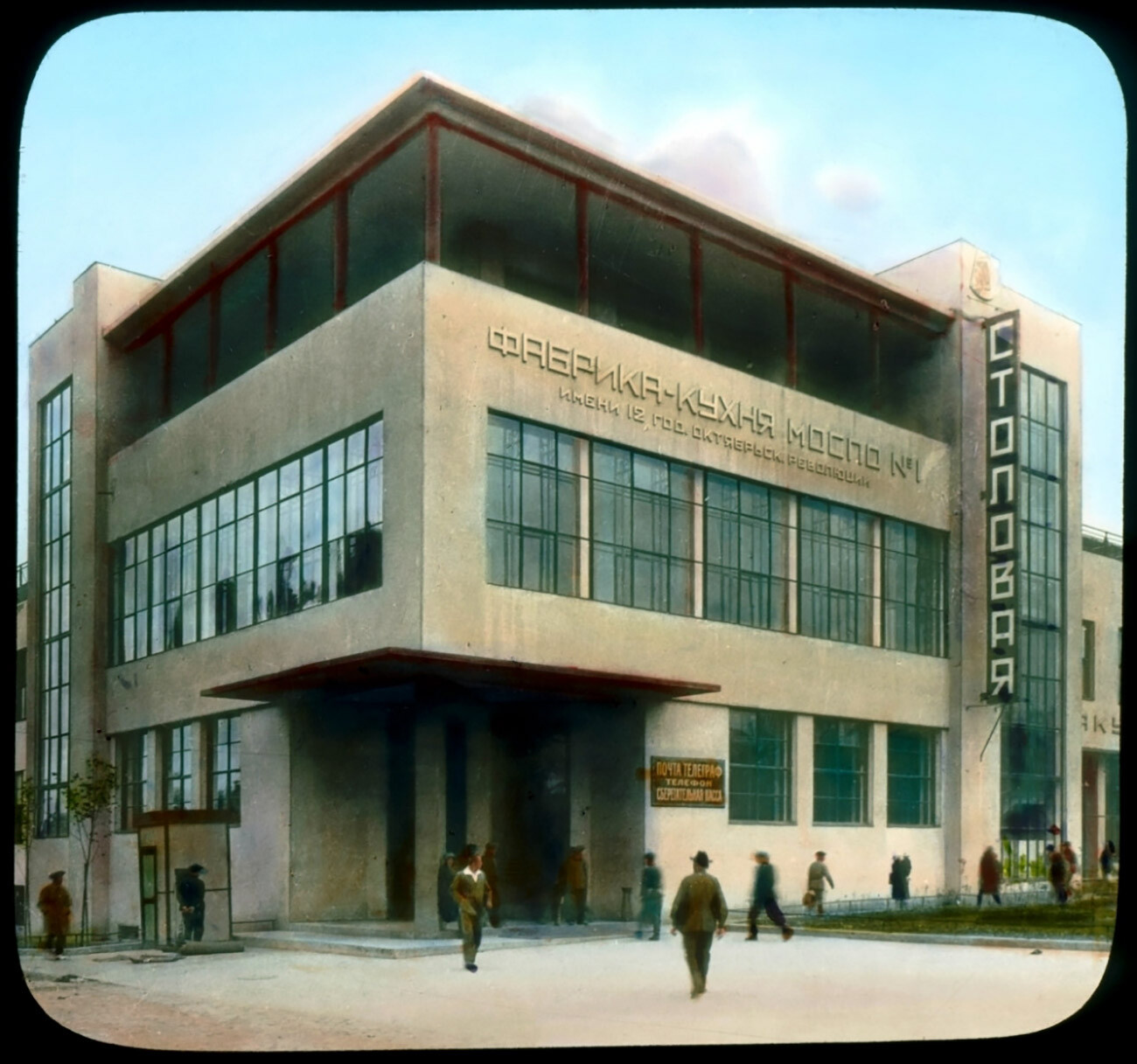 The Moscow Canteen Factory No. 1, which opened in 1928 on Leningradskoe Shosse, was a famous factory-kitchen. The building was symbolically located in front of the ‘Yar’ restaurant, a favorite place for partying of pre-revolutionary aristocracy and the creative intelligentsia. The building was first designed from scratch by the architect Aleksei Meshkov, in the spirit of Soviet modernism. A dining hall for 1,200 people was constructed in the building. In addition to the factory-kitchen, there was a snack bar for 250 people, where you could buy breakfast, lunch and dinner. There was also a store, a savings bank, a post office and a telegraph office. By 1936, there were 25 kitchen factories in Moscow or at least that many were listed in the address and reference book ‘All of Moscow’ (1936).

Leningrad (present-day St. Petersburg) was not left out either - four factory-kitchens were opened here in 1930. The largest complex (with an area bigger than 20,000 m2) was located in the Kirovsky District, which served the workers of the ‘Krasny Putilovets’ factory.

A factory-kitchen in the shape of a hammer and sickle

In 1929, the city administration of Samara decided to build a factory-kitchen for the Maslennikov defense plant. The first Soviet female architect, Ekaterina Maximova, who by that time had already worked on similar projects in Moscow and other cities as part of a group of ‘Narpita’ (People’s Food) specialists, was put in charge of the construction. 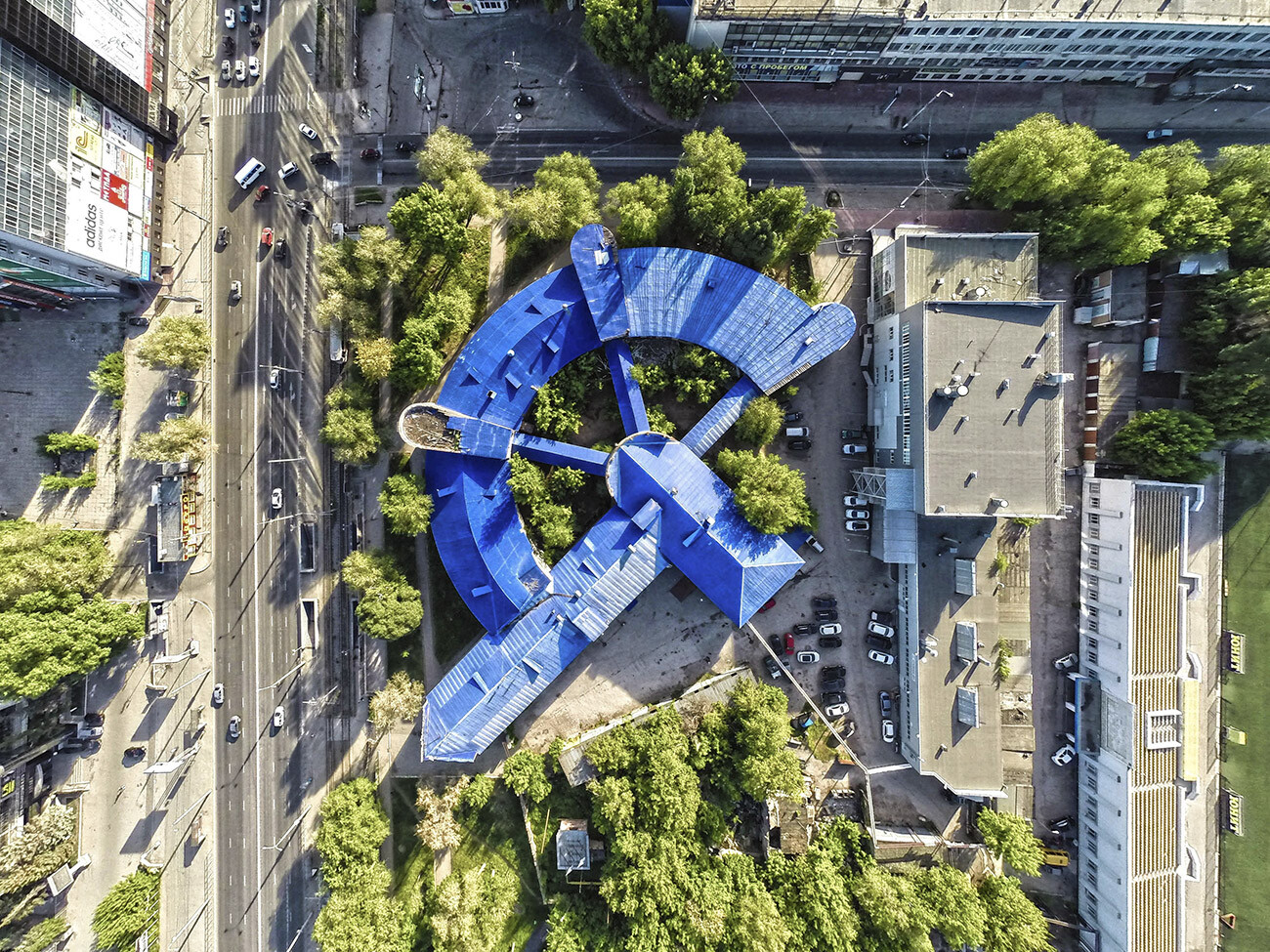 Maximova believed that “in the future the factory-kitchen should… liberate women from boring domestic duties and enable a full life and self-expression on an equal footing with men”.

Maximova designed a two-story constructivist building in the shape of a sickle and hammer, the Soviet symbol of the unity of peasants and workers. Invented in 1918 by artist Yevgeny Kamzolkin, it became part of the coat of arms of the Soviet Union. Maximova used the unusual shape to separate the building into segments by functionality.

The first floor of the hammer housed the kitchen and technical facilities, while the sickle housed the cloakroom and three canteens: for children, workers, and factory employees. A conveyor belt served food from the kitchen in the “hammer” to the canteens in the “sickle.” The factory had a production capacity of nine thousand meals per day, and three thousand meals were made daily in the form of semi-finished products.

The second floor of the building was occupied by technical rooms and staff offices. The floors were connected by six staircases, the spans of which were decorated with colored stained-glass windows. There was a terrace on the roof, where, in summer, people could have lunch if the weather was good. In addition to the dining halls, the building housed a cookery, a library, a post office and a sports school.

Were the factory-kitchens a success? 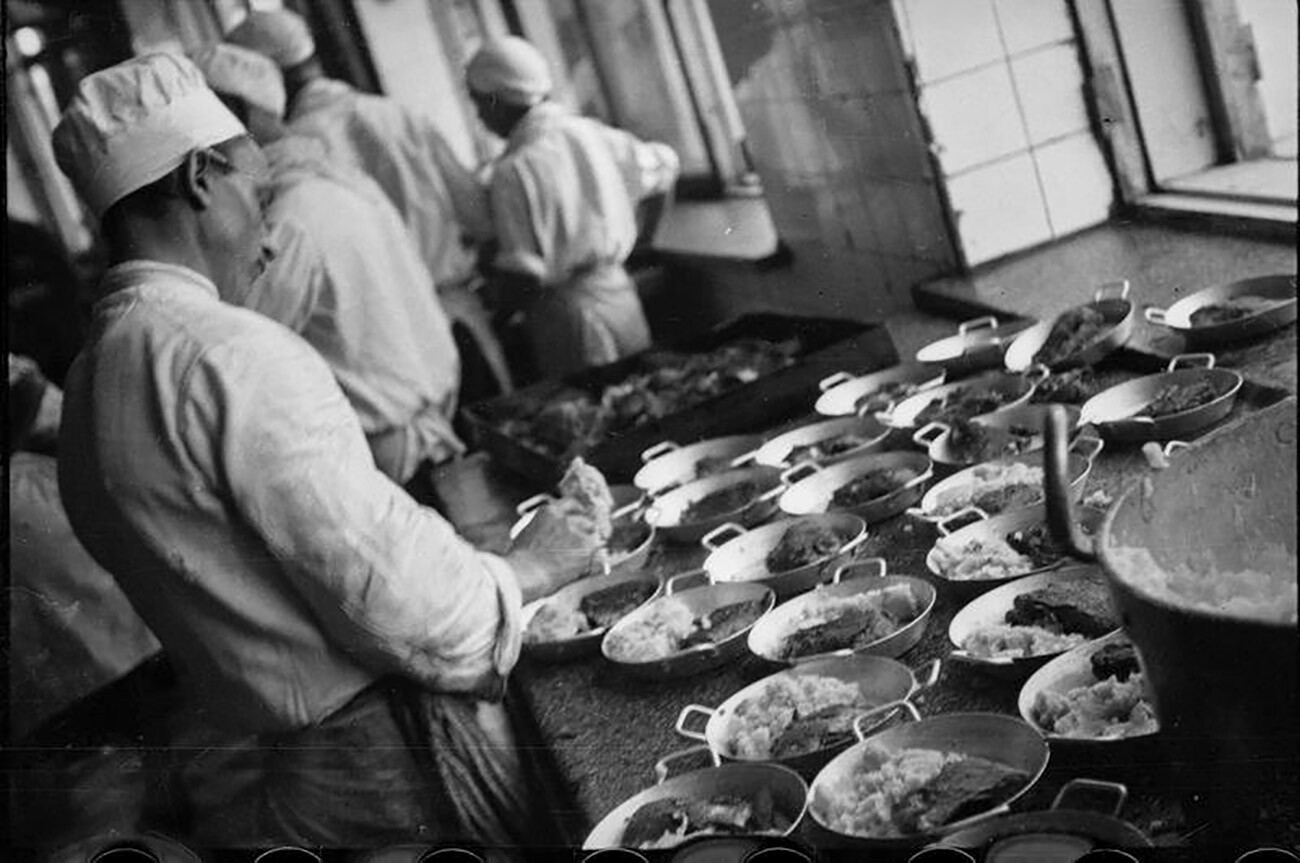 Factory-kitchens as places of public catering had several advantages over cooking at home or eating at a café: bulk purchases of products and high productivity with mechanized cooking methods made it possible to produce lunches at home prices with substantial savings in time. Earlier, workers simply stepped away from their machines and ate a piece of bread or other simple food brought from home for lunch. Now, all workers ate meals prepared to a uniform standard in bright dining rooms from clean porcelain plates with shiny cutlery. 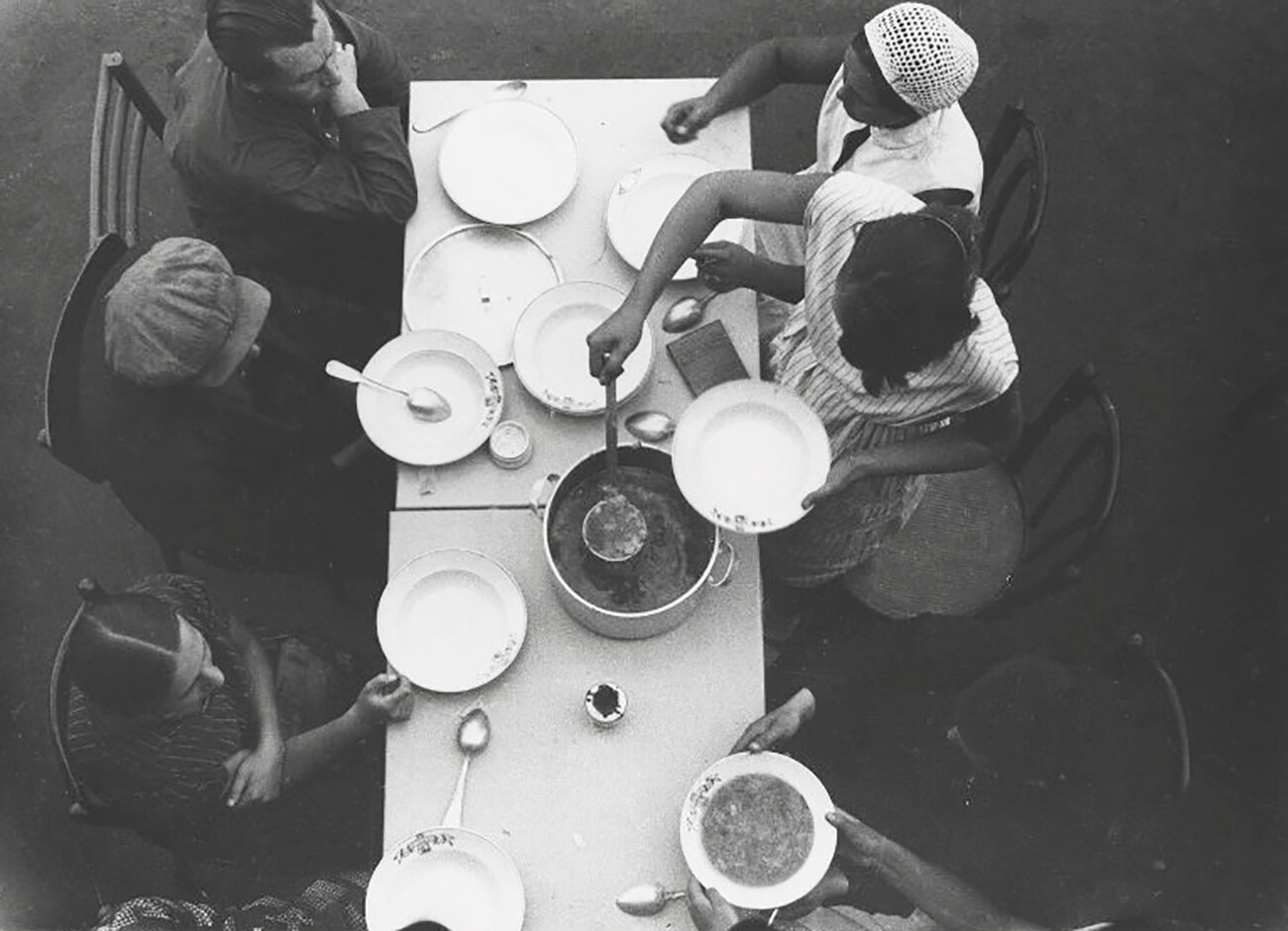 Despite all pros, the construction of factory-kitchens was halted by the mid-1930s. The construction of huge buildings with high-tech stuffing was expensive, while their profitability was low. In a slightly better position were the factory-kitchens that sold bulk food for canteens of other factories. However, at that time, many enterprises began to open their own, in-house canteens and provide their employees with food. In addition, the food industry was also actively developing. The USSR began to produce canned foods, which also facilitated cooking at home. However, the complete abandonment of homemade food did not happen.

Factory-kitchens worked until the very collapse of the Soviet Union. In the 1990s, private businesses reappeared and the profitability of factory-kitchens did not suit the private sector. Stores and other enterprises that brought more income began to open in the buildings.