10 Soviet Avant-garde food posters: Advertising in the USSR between the world wars 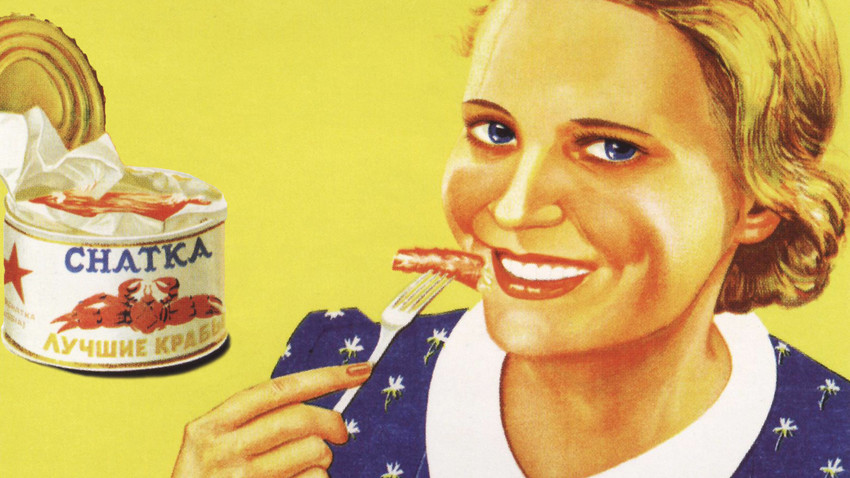 A. Miller
Despite the fact that most of the Soviet population during the interwar period was undernourished, leading artists of the time worked on posters advertising food products.

In his memoirs, Joseph Stalin's personal interpreter, Valentin Berezhkov, recalls: "It was already dark, the square was ablaze with street lights and the roof of the Polytechnic Museum was lit up with colorful advertisements: ‘It is time for everyone to try and see how delicious and tender crabs can be,’ and ‘I eat jelly and jam’... This was all the idea of Mikoyan, who was in charge of domestic commerce, among other things. He asked famous poets, such as (Vladimir) Mayakovsky, to write catchy advertisements.."

Berezhkov was referring to Anastas Mikoyan, who in 1926 became the Soviet People's Commissar for Domestic and Foreign Trade, and later occupied senior posts for several decades. After a two-month trip to America in 1936 he brought back food production technology and equipment that was then used throughout the USSR. But all these new items needed promotion. 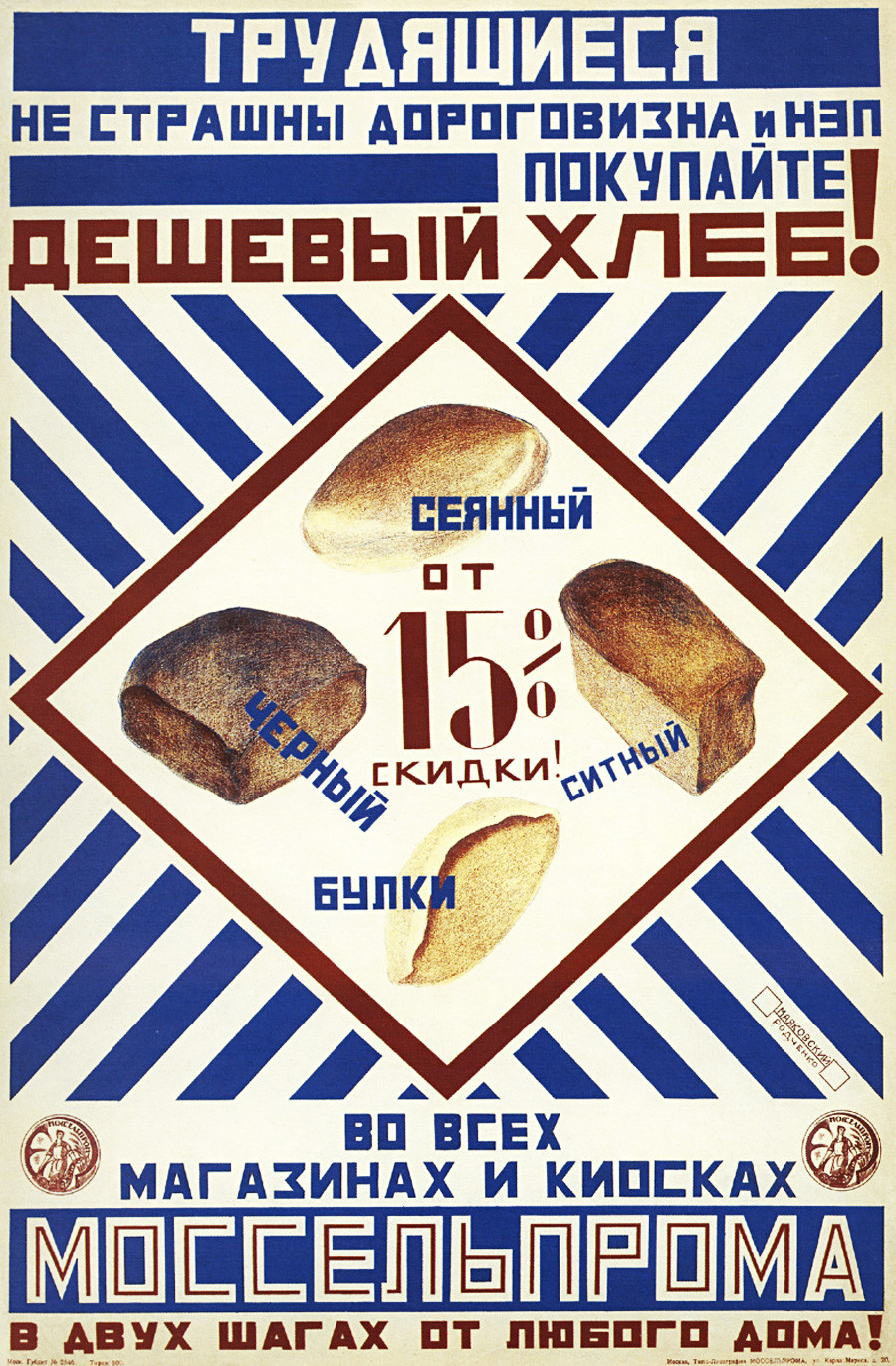 In 1925, the tandem of poet Vladimir Mayakovsky and artist Alexander Rodchenko, in their characteristic Constructivist style, devised a poster that read: "Workers/ Fear not high prices or NEP/ Buy cheap bread/ Light, dark or sifted bread and rolls/ At all Mosselprom* stores and stalls/ A stone's throw from anyone's home!"

During the New Economic Policy (NEP) of the early 1920s a limited private sector was allowed to operate. While tolerating private traders, the state tried in every way to prevent them from enriching themselves. Posters called for buying bread, as well as many other food items, not from private traders but in state-owned Mosselprom stores, trying to attract buyers with cheaper prices.

2. Oat flakes a guarantee of health 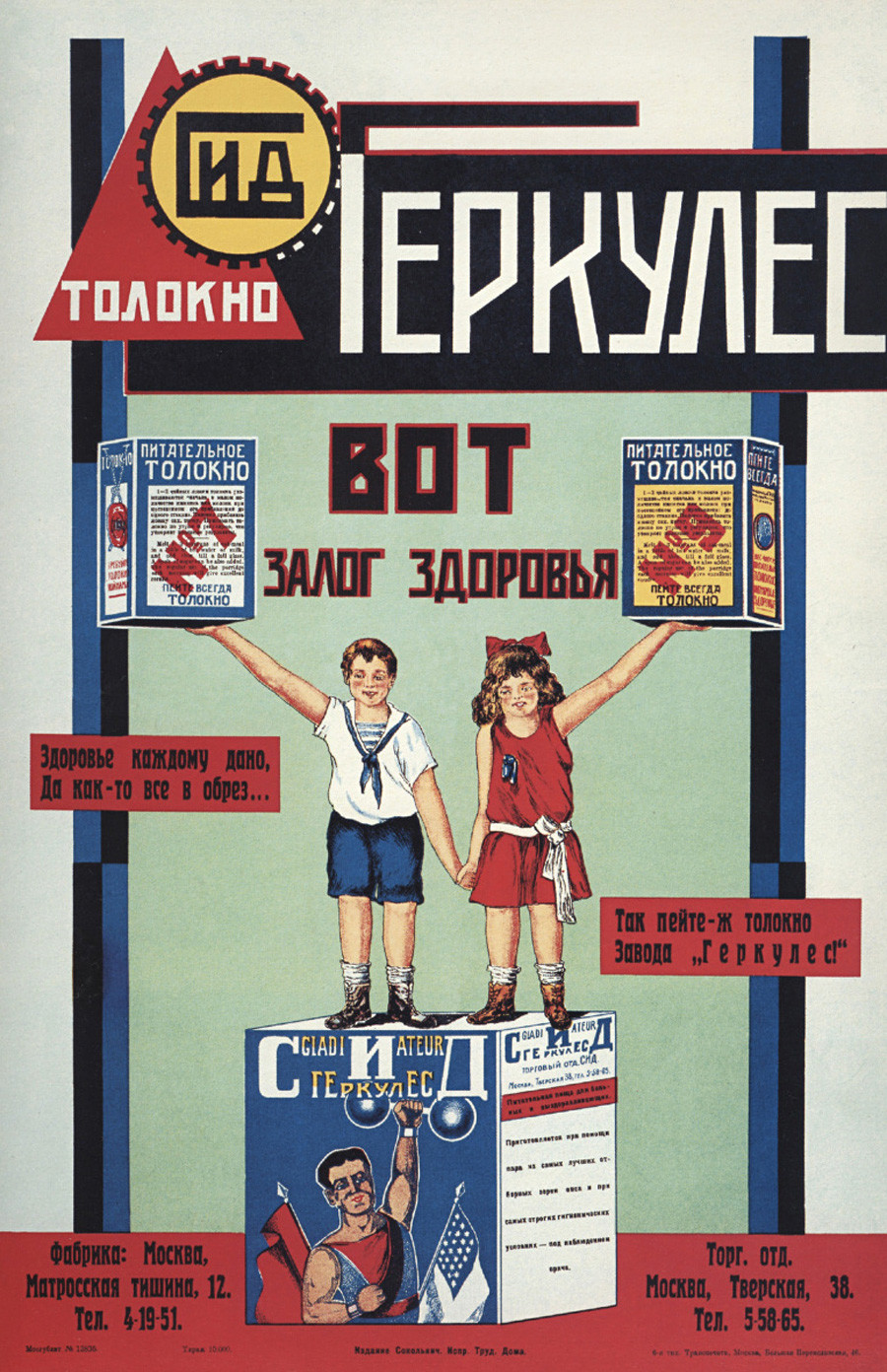 In 1923 the USSR began to produce Gerkules (Hercules), a processed oatmeal porridge. It was a completely new product and needed to be promoted.

"Gerkules is a guarantee of health. Everyone is given health, albeit just enough of it," reads a 1926 poster by an unknown artist.

Gerkules was produced in large quantities at the Sokolniki Correctional Labor Facility (better known as the Matrosskaya Tishina prison).

3. Ask for confectionery made by state-owned factories of Mosselprom 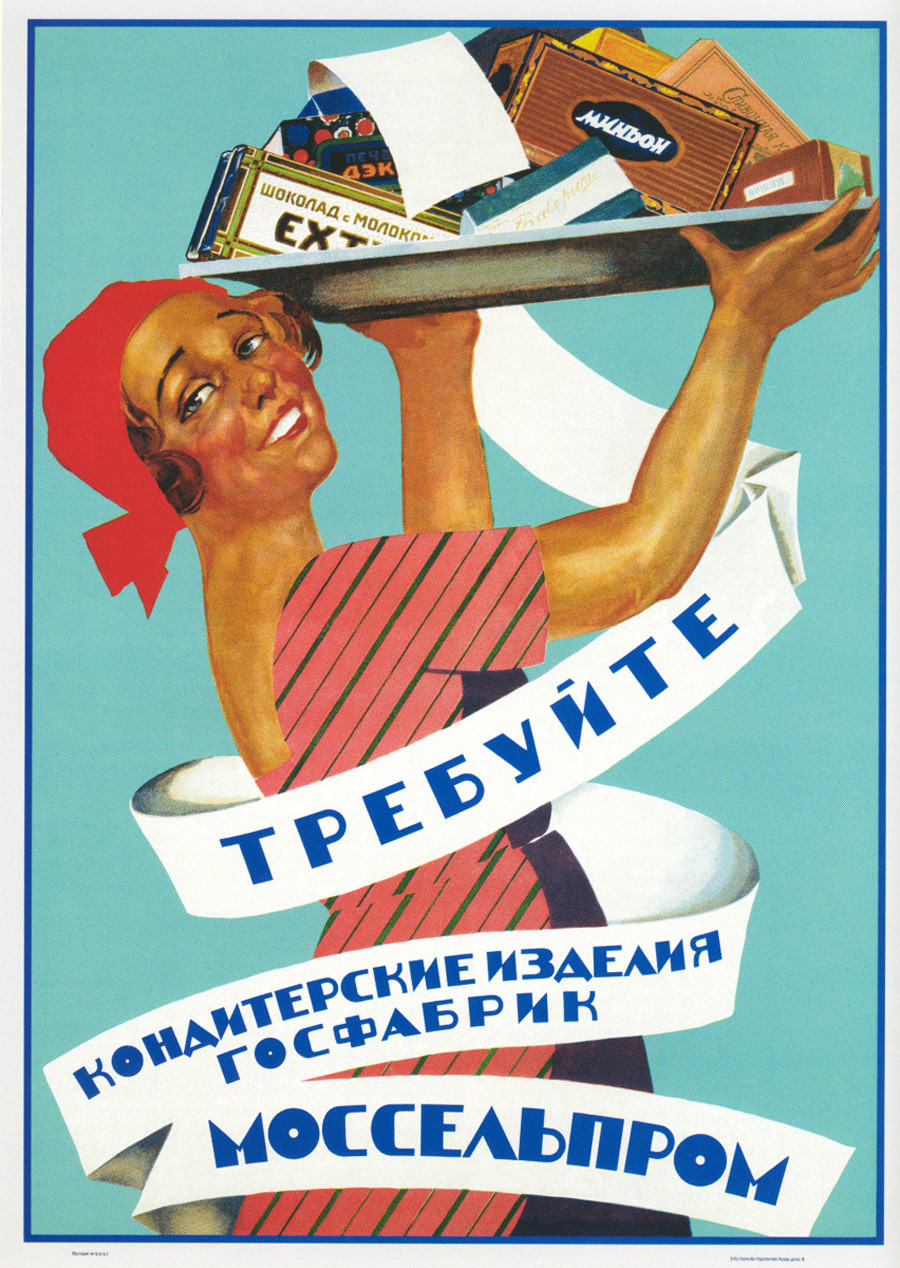 The major confectionery factories Krasny Oktyabr (Red October), Bolshevik and Babayevsky were nationalized after the Revolution and became part of Mosselprom. It was claimed that due to reduced production costs, confectionery prices had gone down considerably, and that the colorings used [in the production process] were absolutely harmless.

A 1928 poster by Boris Takke shows a Communist woman in a red headscarf with a tray full of candies and cookies.

By that time Mosselprom had set up an advertising agency headed by Konstantin Yuon. It began to show products in a more painterly manner, with enlarged proportions. The posters now depicted features of different social groups. 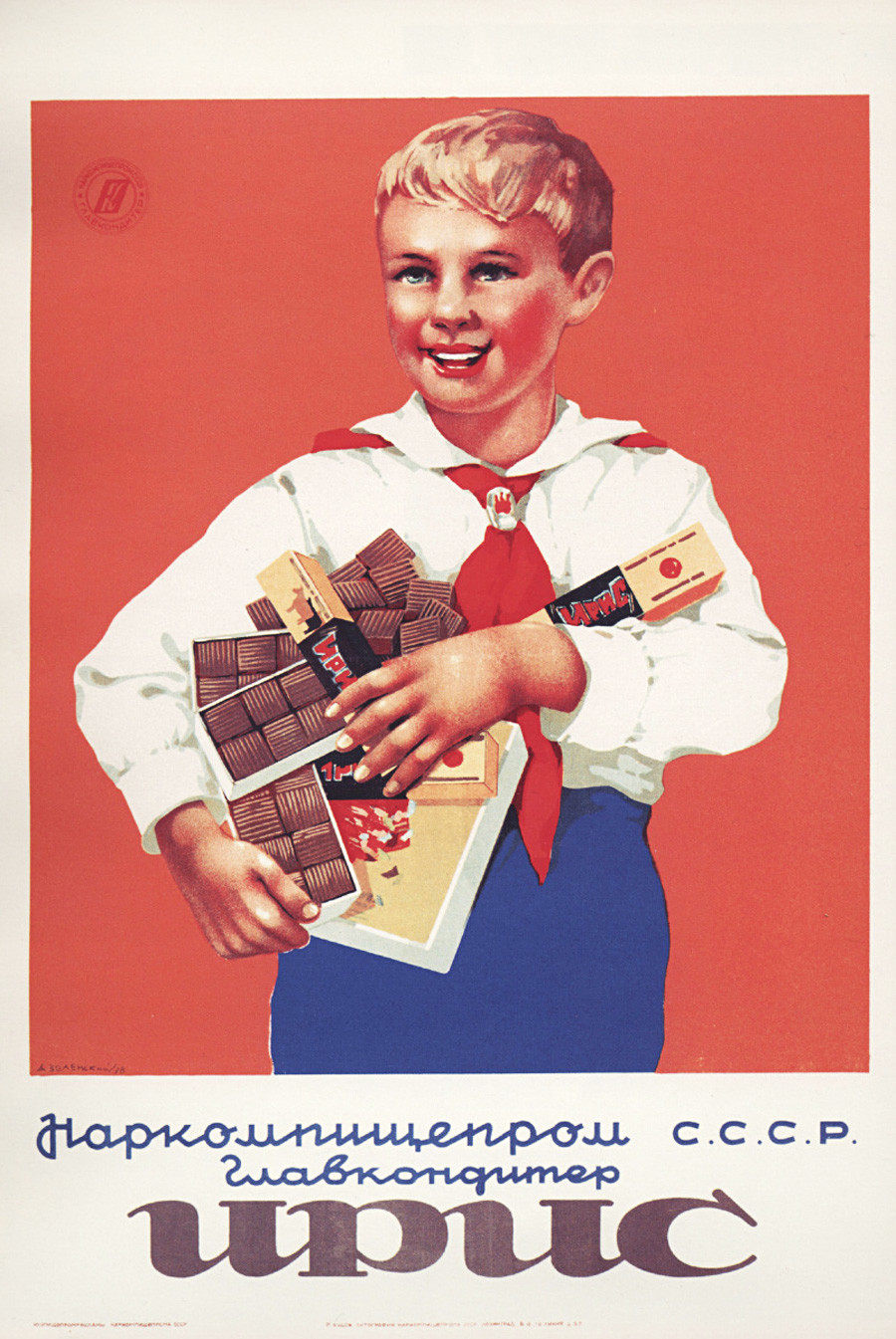 A 1939 poster by Alexander Zelensky, who also worked for the Mosselprom agency, shows a boy dressed as a Young Pioneer with a large quantity of Iris fudge candies. Made with condensed milk, they first went on sale in the 1920s and were a novelty. 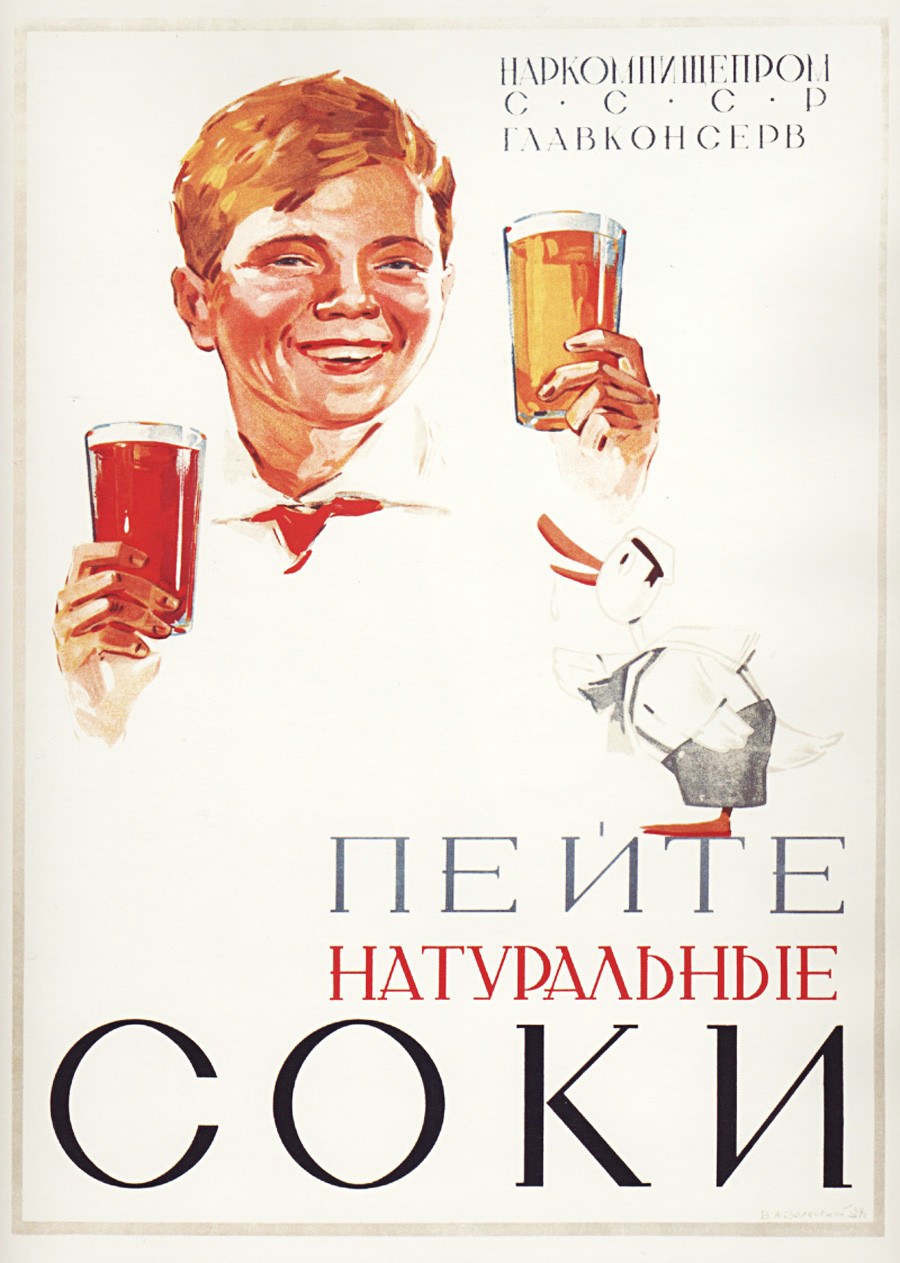 On another 1939 poster, Boris Zelensky, the artist son of Alexander Zelensky, portrayed another boy in Young Pioneers’ uniform, this time with two glasses of juice.

Mikoyan noticed that Americans had orange juice for breakfast. "Since we didn't have oranges, in the end we went for tomato juice, building appropriate plants for processing tomatoes," he recalls in his memoirs That's How it Was. "I dreamed of producing such a quantity of tomato juice that it would become a truly popular consumer product, which in our conditions was quite realistic." 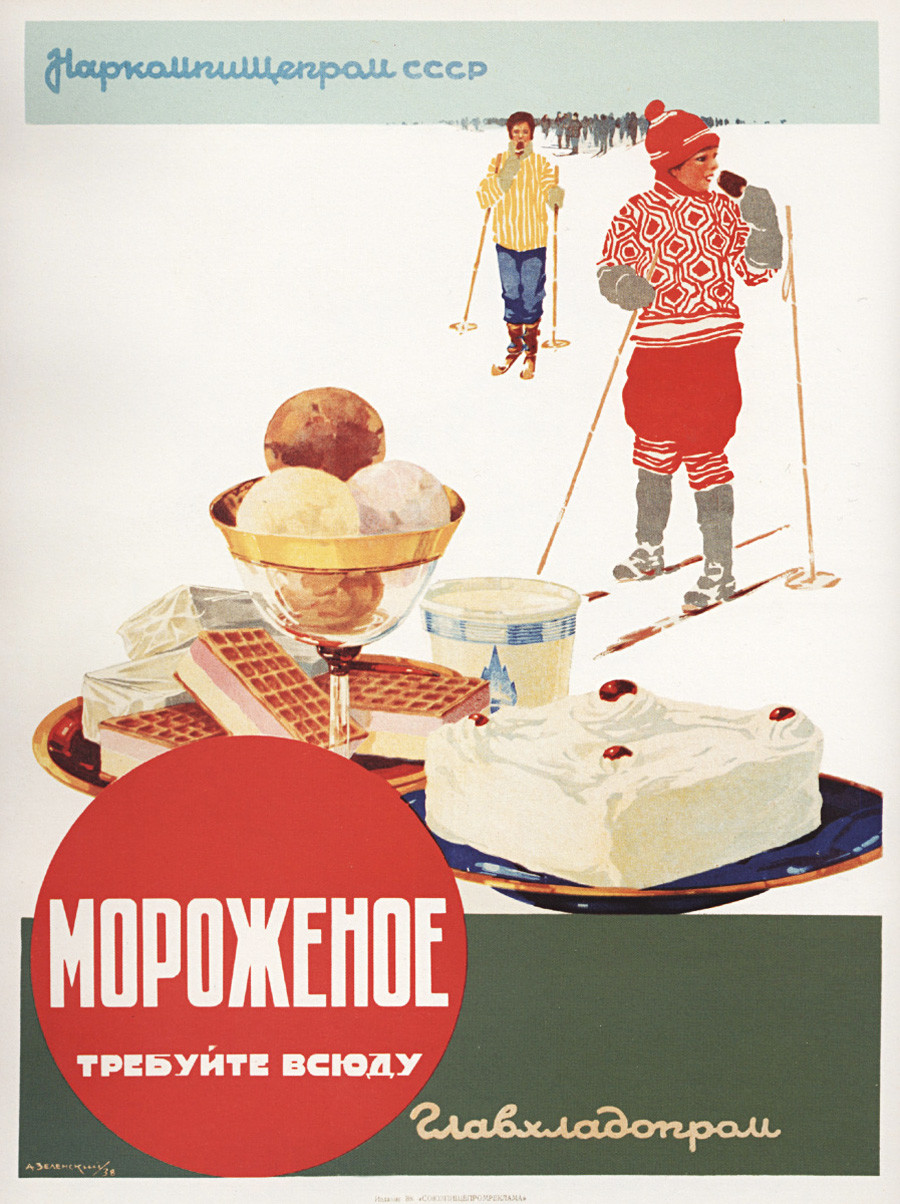 Mikoyan also mentions visiting an ice cream plant in America: "From time immemorial ice cream had been known in Russia as an artisanal product. The challenge was to develop its mass production and make ice cream cheap and affordable… So we brought all the technology for mass production of ice cream from the U.S. Soon the construction of the first ice cream factory, for which it was decided to buy equipment from the U.S., was completed at the Moscow Refrigeration Plant No 8. Indeed, using the equipment bought in the U.S., in 1938 our factory started producing ice cream, double the amount originally planned."

On a 1938 poster by Alexander Zelensky a boy eats an ice cream while skiing. 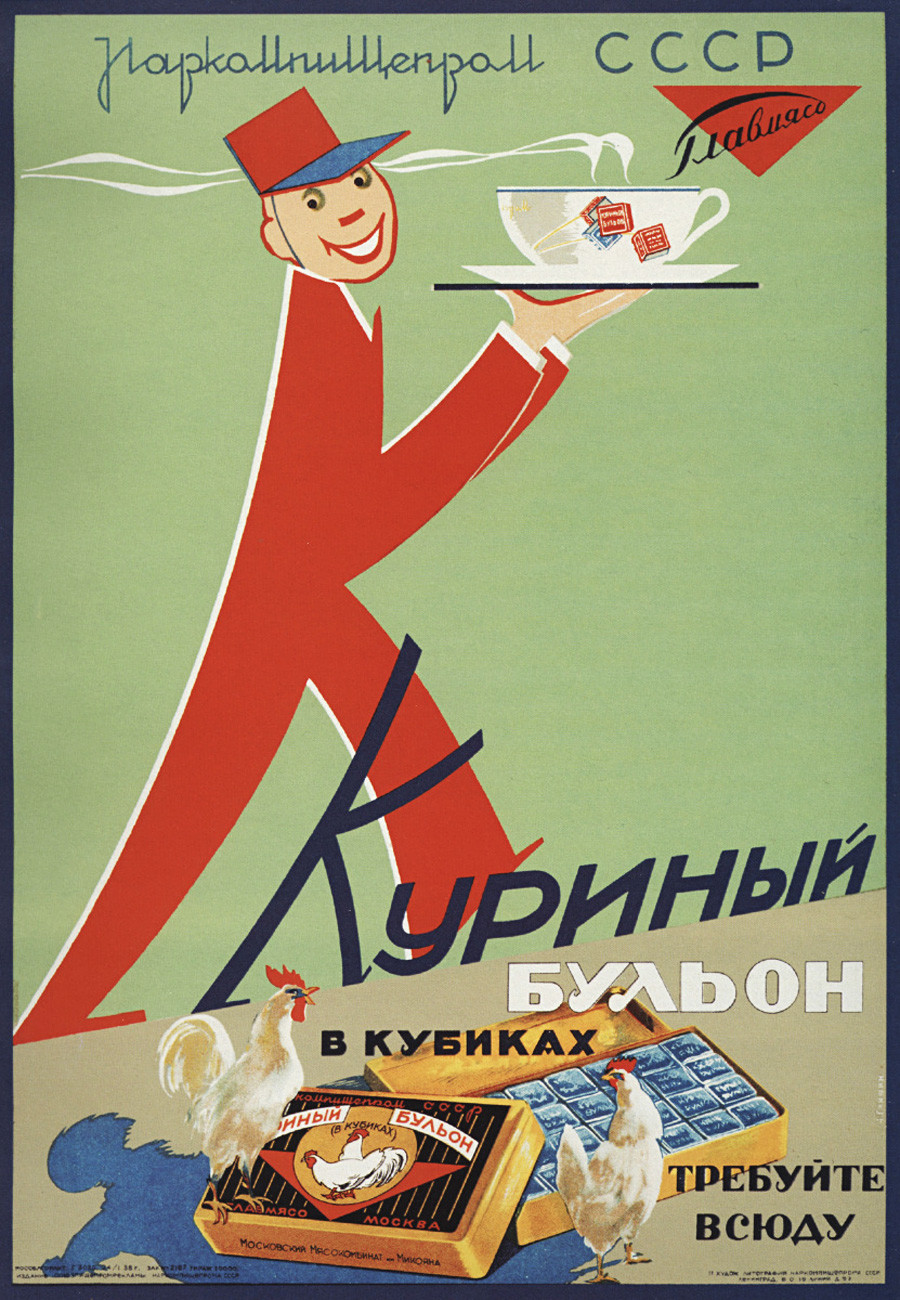 The USSR didn't import American Maggi stock cubes, but produced its own. They were made with natural meat, and hence, were scooped up quickly, and never achieved widespread popularity. "Ask everywhere for chicken stock cubes," says a 1937 poster by artist Iosif Grishin. 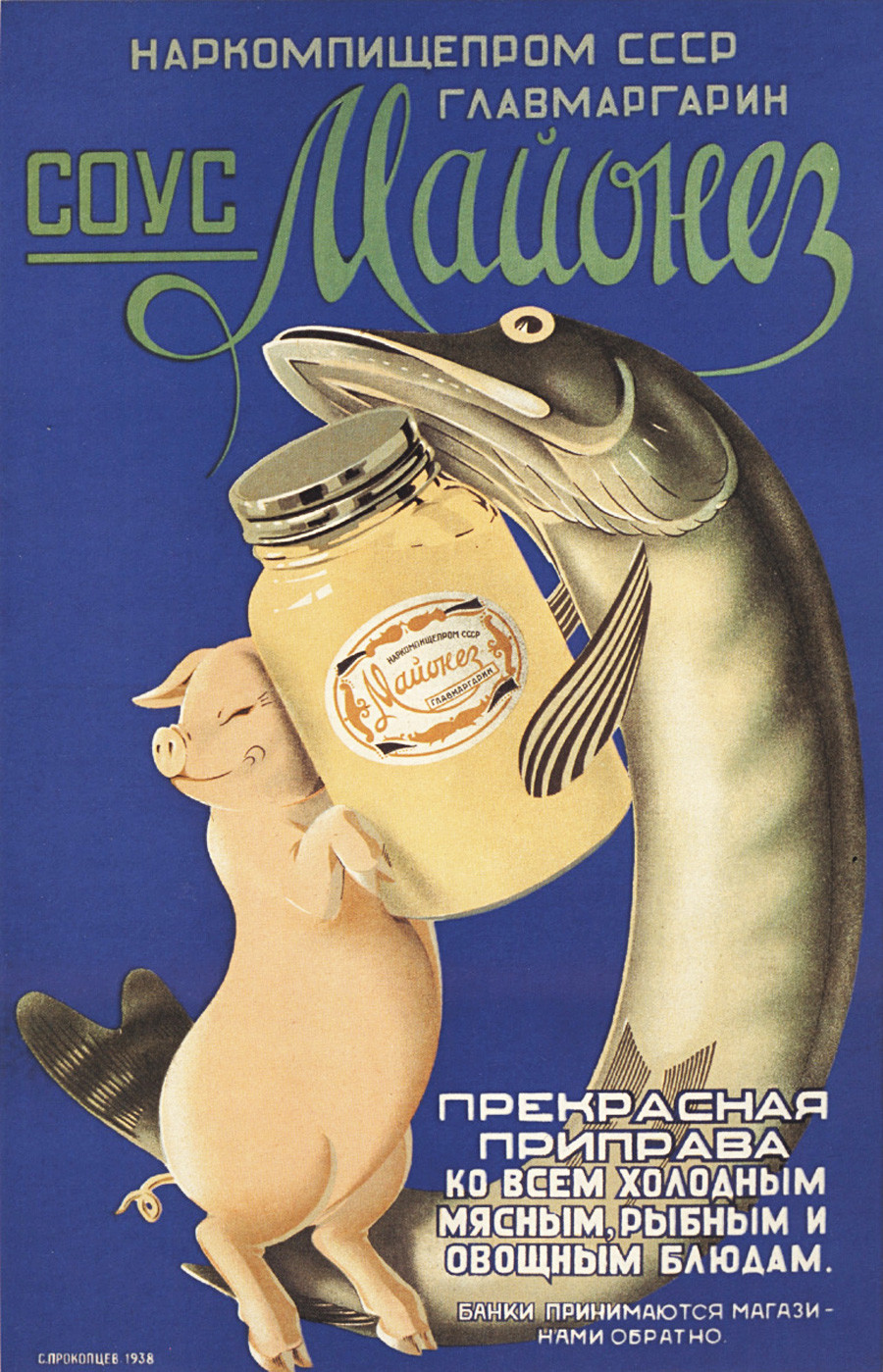 Mayonnaise was a new product in Moscow in 1936. Stalin was given some to try, and following his approval mass production of mayonnaise was launched.

Artist Stepan Prokoptsev drew a pig and a pike hugging a mayonnaise jar. The slogan reads: "Mayonnaise sauce. Excellent dressing to accompany any cold meat, fish or vegetable dishes." The year was 1938. 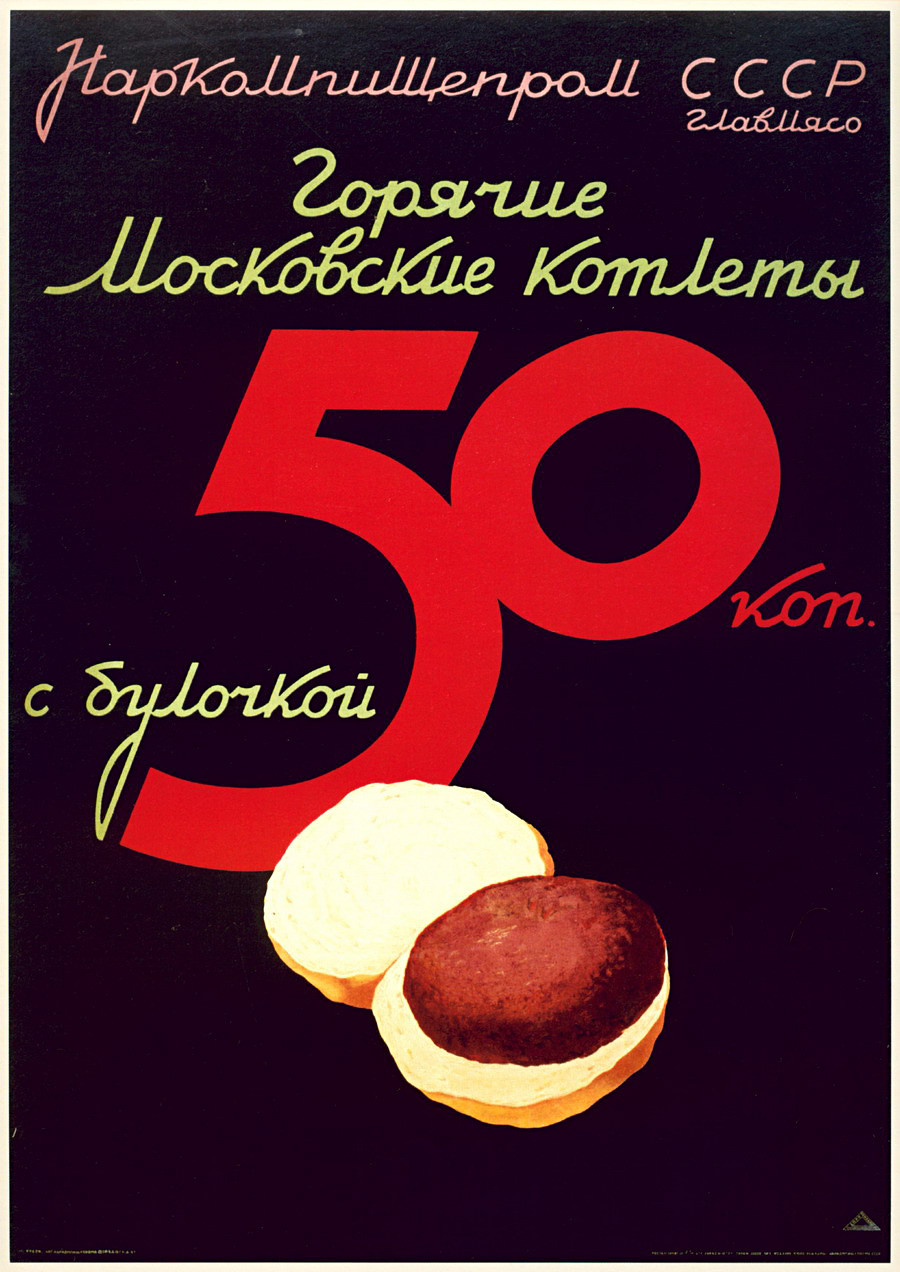 Mikoyan brought from America samples of equipment and chargrills that street traders used for preparing cutlets that were placed between two pieces of bread (either white or dark) and were meant to be a tasty snack for workers. Starting in 1937 Soviet "burgers" and lemonade were widely sold at street stalls in major cities. "Burger joints" had every chance of becoming popular in the USSR but then the war started in 1941. As a result, the mass production of equipment to make burgers was never set up, and burgers never became a part of Soviet lifestyle. Today, they are still regarded in Russia as a feature of Anglo-Saxon culture. 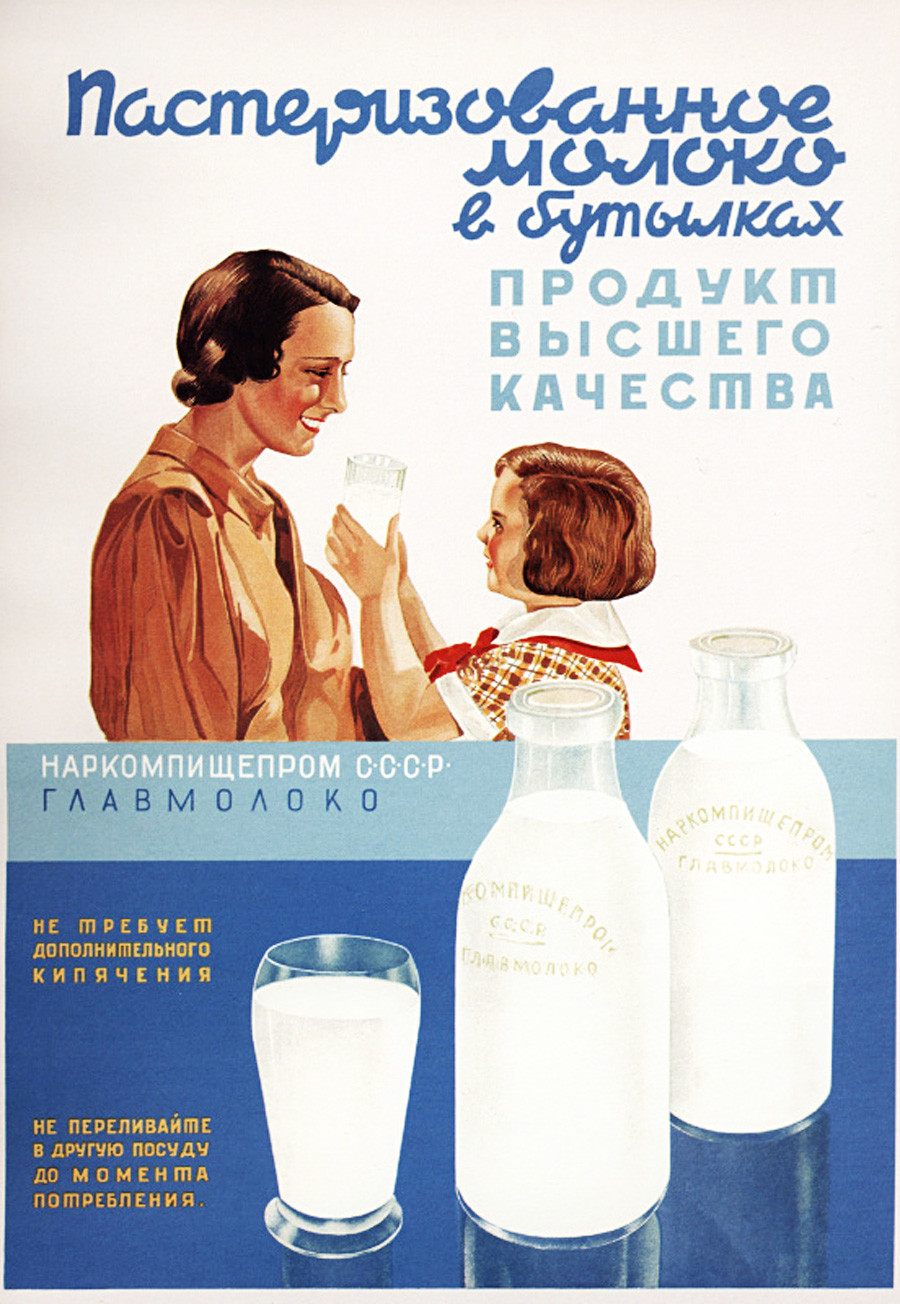 On a 1938 poster by Alexander Pobedinsky a girl dressed in a Pioneers’ uniform holds out a glass of milk to her mother. In the foreground you see milk bottles that citizens handed in for recycling. The population was not yet familiar with pasteurized milk and therefore the wording on the poster explains that the milk doesn't require additional boiling and doesn't have to be transferred "to a different container prior to consumption."

*Mosselprom, the Moscow Province Association of Enterprises for Processing Agricultural Produce, united factories nationalized after the Revolution, and existed from 1922 until 1937. It had regional branches in other cities. In 1937, Mosselprom was abolished. A new agency, Soyuzpischepromreklama, wasset up in 1938 under the auspices of Narkompischeprom (precursor of the USSR Ministry of Food Industry), and then was put in charge of advertising food products.

Read more:  Sober up by looking at these Russian and Soviet anti-booze ads