How Russia crushed Napoleon in 1812 (PICS) 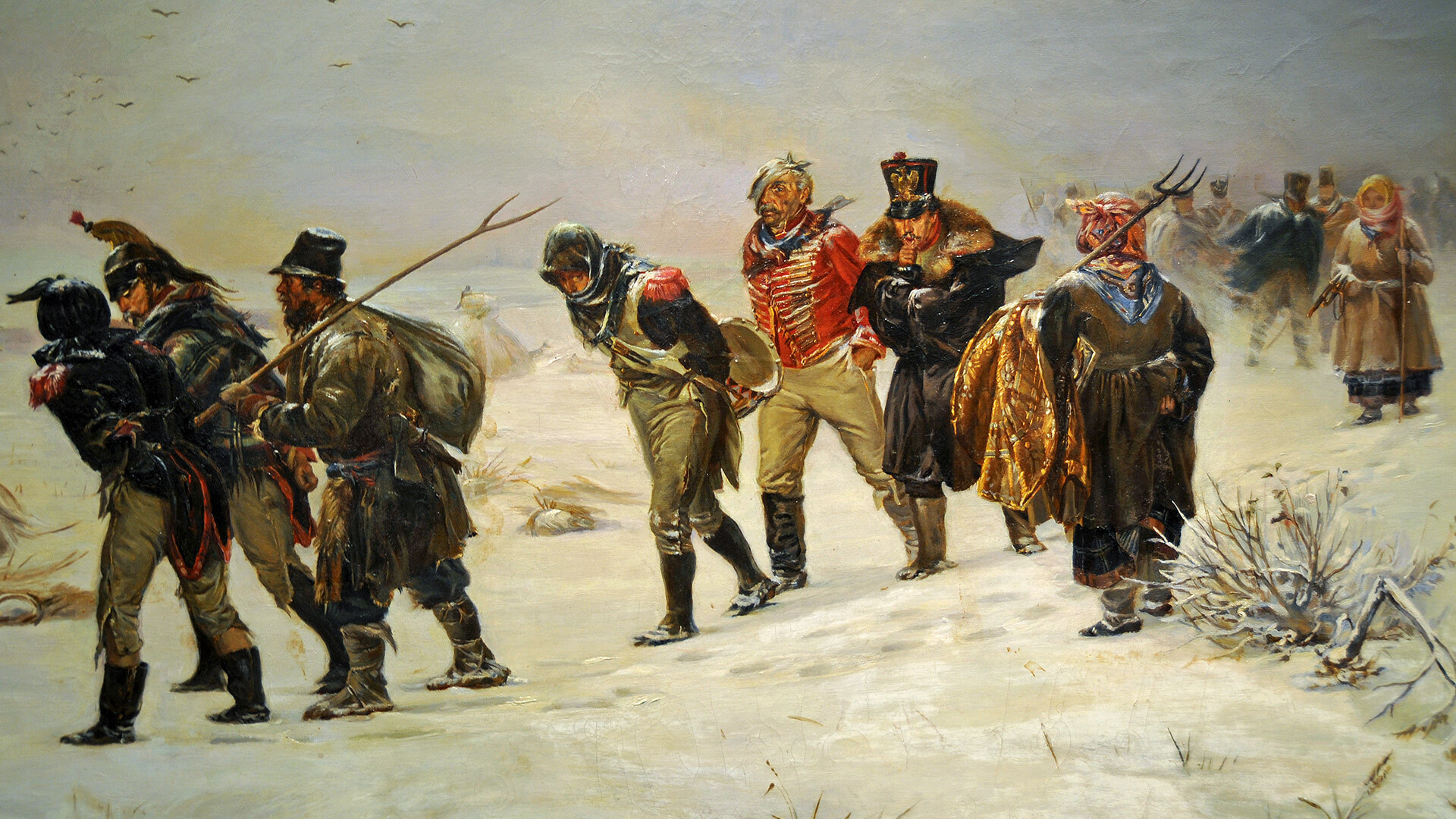 Illarion Pryanishnikov
The French believed that taking Moscow would bring them victory in the war. However, the city turned out to be the grave of the Grande Armée.

On the night of June 23-24, 1812, a reconnaissance party of the Lifeguard Cossack Regiment patrolling the border of the Russian Empire on the River Neman near Kovno (now Kaunas) discovered a company of French sappers landing on the shore. “Who’s there?” a Russian officer shouted to them in French. “France,” the soldiers replied in low voices. “What are you going to do here?” continued the Russian. “You’ll see, damn it!” After receiving such an insolent reply, the lifeguards fired a salvo at the sappers and retreated. Thus ended the first skirmish of the Patriotic War of 1812, a conflict that would lead to a complete redrawing of the political map of Europe. 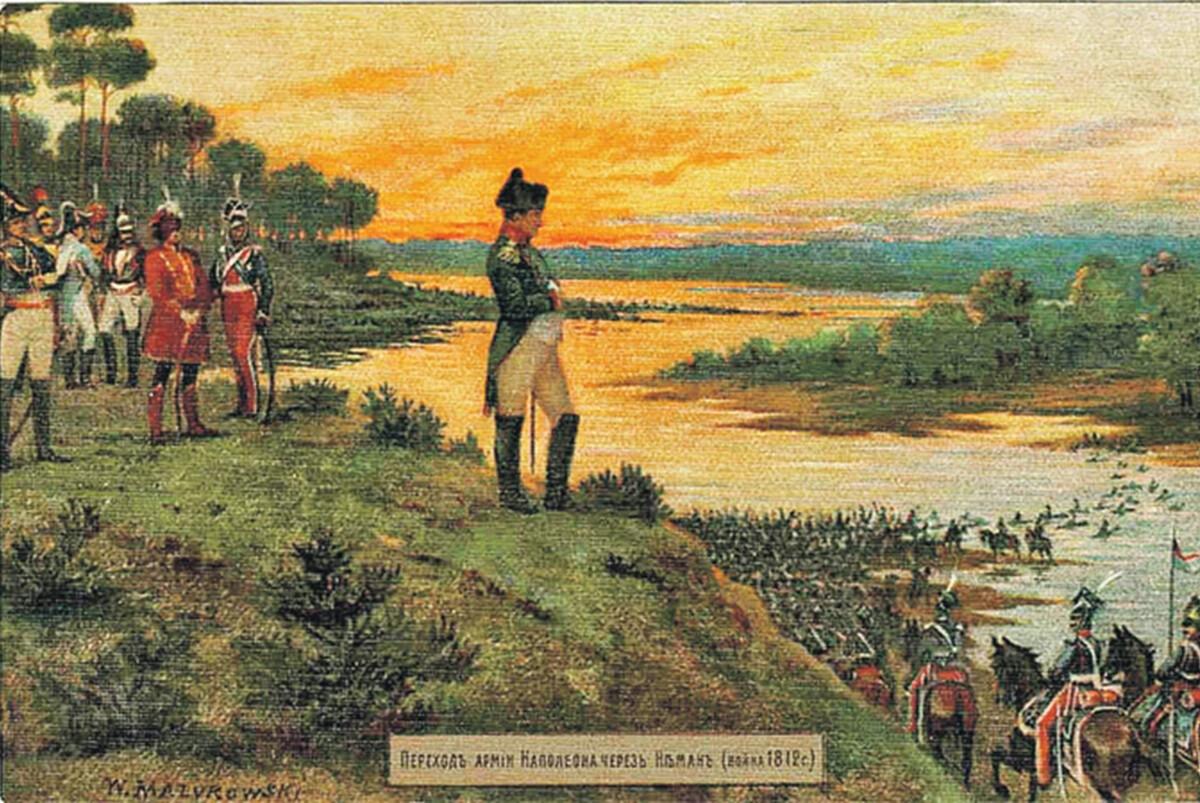 Napoleon Bonaparte expected that the Russian military campaign would be quick and successful and that, after its triumphant completion, it would be possible for him to impose his will on Tsar Alexander I. Above all, the Emperor sought the return of Russia to the Continental Blockade with which France wanted to strangle England economically.

Formally, the tsar had been forced to join the blockade back in 1807, after being defeated by the French in the Battle of Friedland. But it was very much against Russia’s interests to break economic ties with the “Foggy Albion” and it secretly conducted active trade with England. This state of affairs made the very idea of a blockade meaningless. 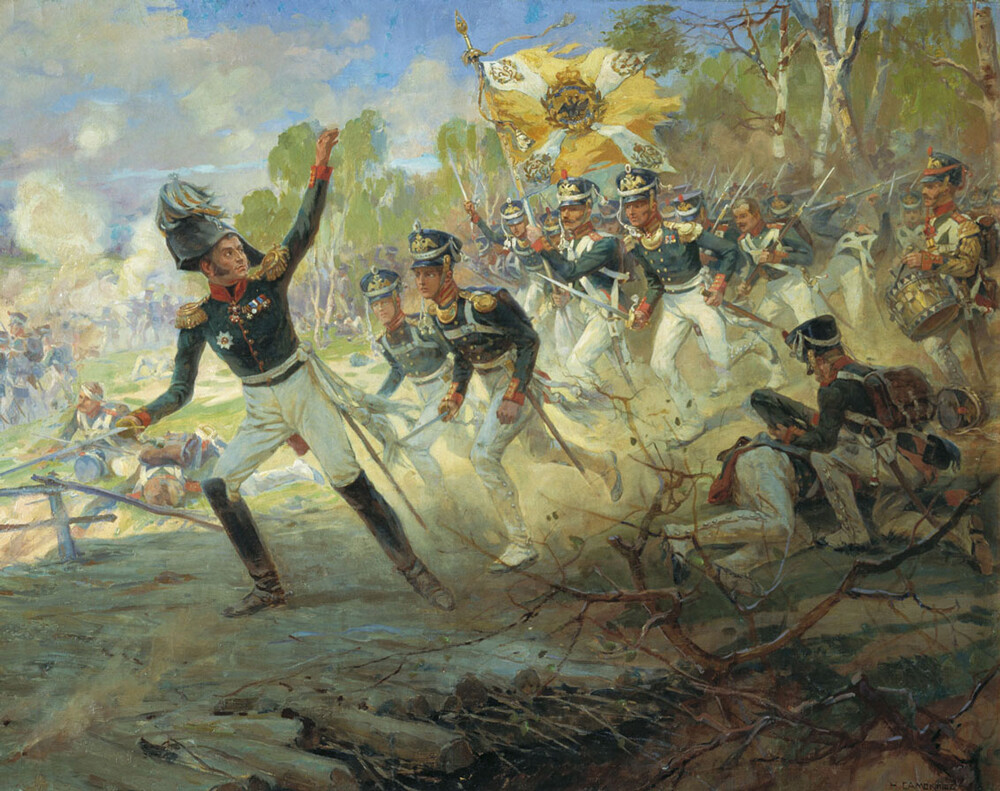 General Rayevski leading his men into combat at the battle of Saltanovka.

The Grande Armée which invaded the Russian Empire numbered over 400,000 men. In the months that followed, it received reserves of 200,000 men. The army included Swiss, Polish, German, Spanish, Portuguese and Dutch soldiers, as well as soldiers of other nationalities. Many of them would have preferred to fight against Napoleon rather than on his side, but, given France’s total domination of Europe, they simply had no choice. The French themselves made up just over half of all the troops. 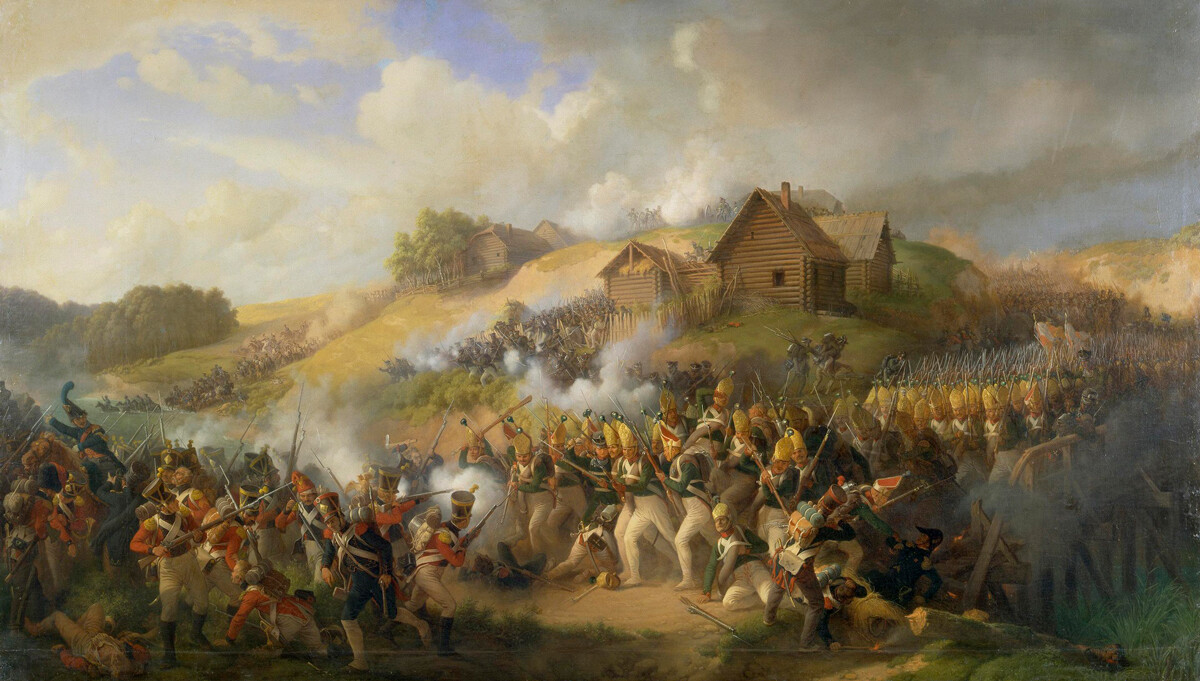 The aggressor was opposed by three disparate Russian armies numbering 230,000 men in total. Avoiding the decisive battle sought by Bonaparte, they retreated eastwards deep into Russian territory in an orderly fashion. On August 3, the First and Second Western Armies united outside Smolensk. Acting Commander-in-Chief Prince Barclay de Tolly intended to continue the retreat, but, under public pressure, was forced to give battle to the French. After two days of fierce confrontation, Smolensk, engulfed by fire, was abandoned. 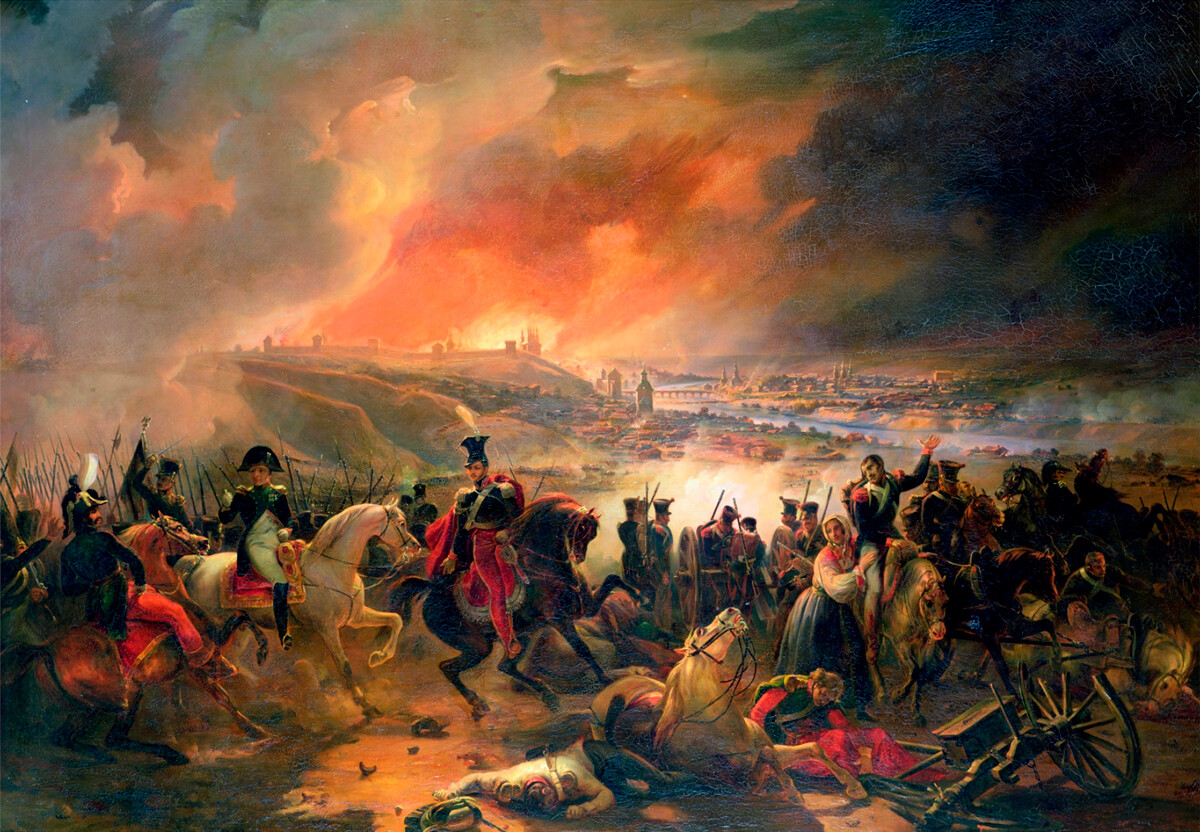 By this time, the Grande Armée no longer regarded the Russian campaign as a walkover. The main forces advancing with Napoleon towards the “heart of Russia”, Moscow, constantly suffered heavy losses in skirmishes with Russian troops. The corps of Marshal Étienne Macdonald, which was fighting its way towards the capital of the empire, St. Petersburg, failed even to take Riga. At the same time, in response to the brutality of the French, the scale of the people’s war was rapidly growing.

“The biscuits have run out, there isn’t a drop of wine or vodka left, the men are just eating beef from cattle taken from the locals and neighboring villages,” an officer of the French garrison wrote home from Smolensk on August 27. “The meat won’t last long either, because the locals, as soon as we approach, scatter, taking with them everything they can carry and hiding in dense and almost impenetrable forests. Our soldiers leave behind their banners and disperse to forage for food; Russian peasants, encountering them individually or in small groups, kill them with cudgels, spears and guns.” 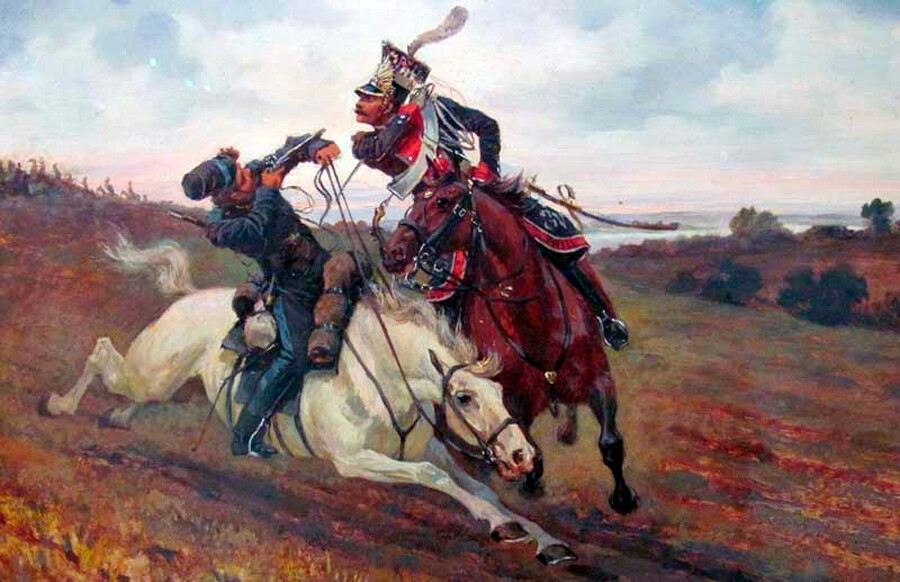 Self-defense detachments spontaneously sprang up in villages and mercilessly dealt with foragers, stragglers and looters. At the same time, “flying” partisan units of hussars and Cossacks operated in the rear of the enemy army. “The prevailing intention of the partisans of that period consisted perforce of pressing, harrying, wearing down, wrestling what they could and, in a manner of speaking, tirelessly and unremittingly burning the enemy over a low flame,” Denis Davydov, commander of one of these detachments, wrote in his ‘Diary of Partisan Warfare’. 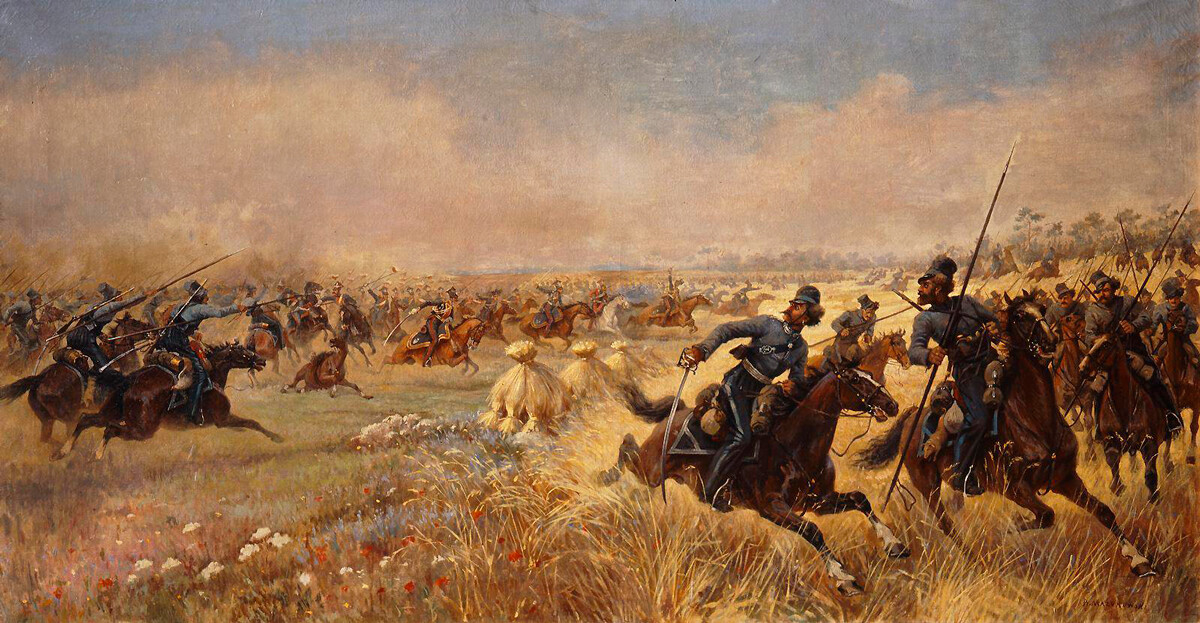 Mikhail Kutuzov, who had replaced Barclay de Tolly as commander-in-chief of the Russian army on August 17, broadly endorsed his predecessor’s strategy of wearing down the enemy through a slow process of attrition and pulling back deep into Russian territory. But, public opinion demanded a major battle and, on September 7, at the village of Borodino 125 km from Moscow, the Russians and French encountered each other in a brutal engagement.

In the aftermath of one of the bloodiest battles in the history of the 19th century, 80,000 men were left lying on the battlefield. Neither side could achieve a decisive victory. As Napoleon was subsequently to remark: “The Battle of Borodino was the finest and the most formidable of battles: The French showed themselves worthy of victory, while the Russians deserved to be unconquered.” 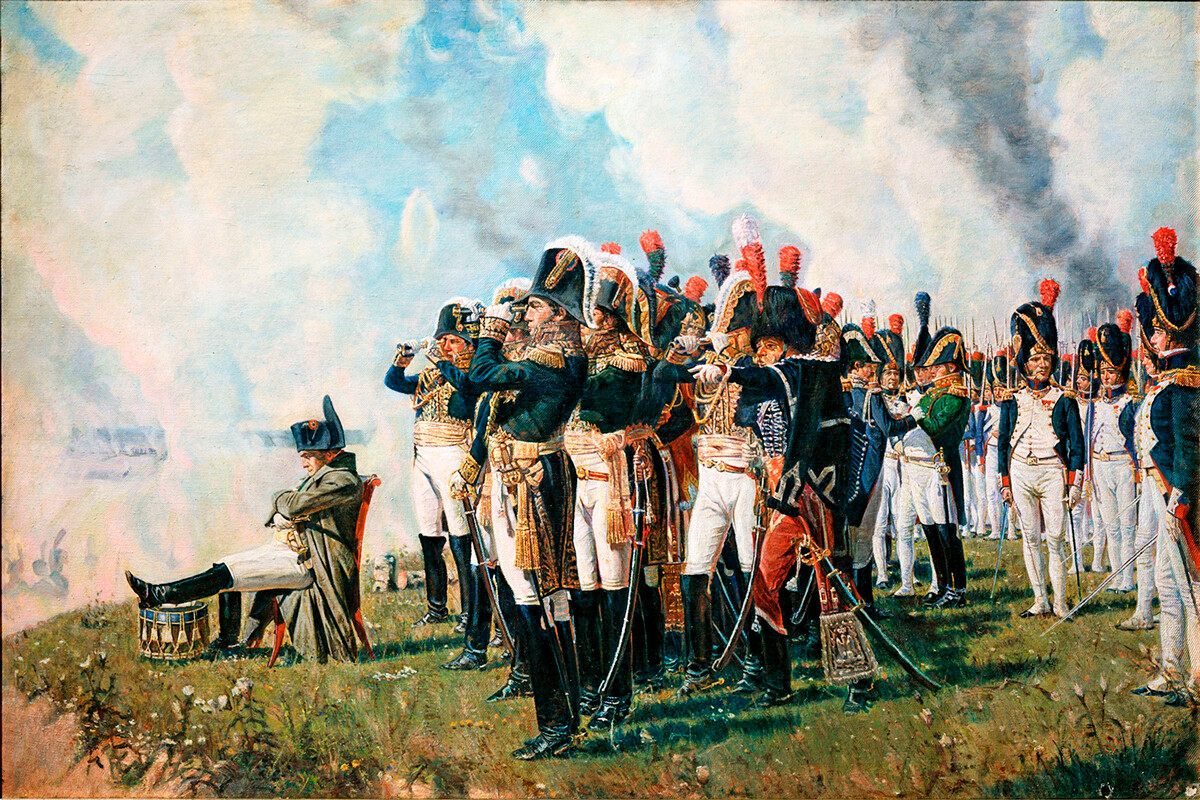 Kutuzov realized that the depleted Russian army would not be able to endure another battle. A council of war in the village of Fili on September 13 took the difficult decision to withdraw and to relinquish the ancient capital to the enemy. “The loss of Moscow does not mean the loss of Russia. I consider our primary objective to be the preservation of our army,” the commander-in-chief declared at the time. 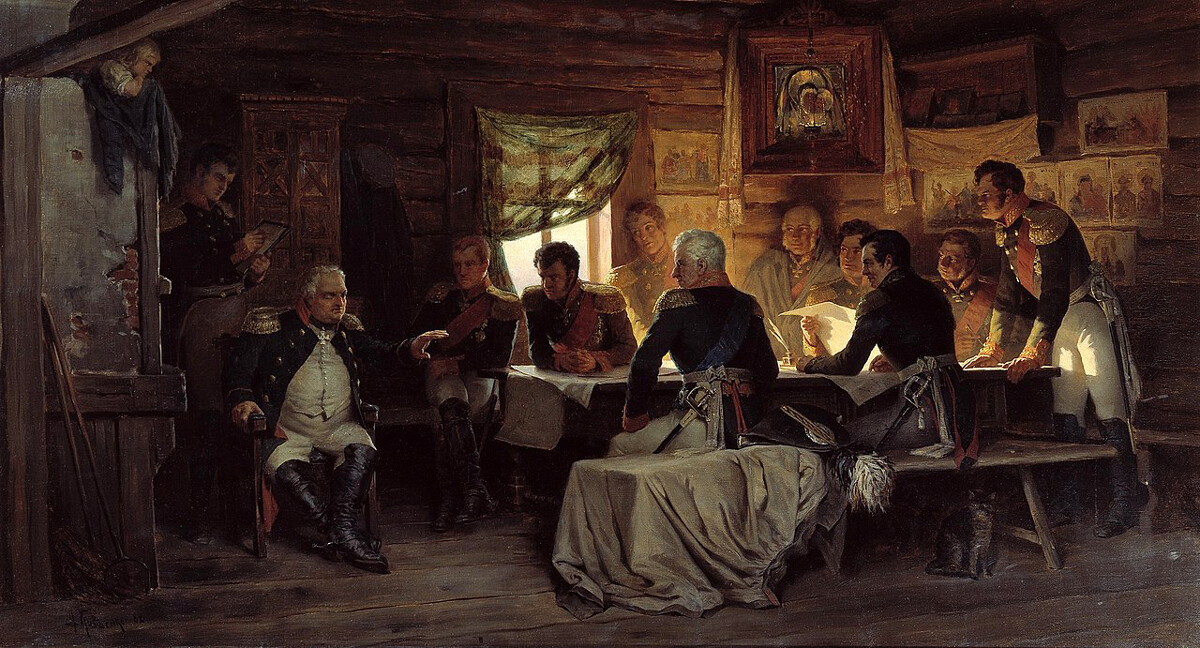 After occupying Moscow, the French Emperor decided that he had finally achieved victory and he started to wait for emissaries from Tsar Alexander I to come suing for peace. Instead, he was greeted by a terrible fire that destroyed three-quarters of the city’s wooden buildings. “What a hideous spectacle! They are setting the fires themselves… What resoluteness! What a people! They are Scythians!” uttered the Emperor as he observed the raging ocean of fire from the Kremlin.

Forced to sit idle in Moscow, the once “Great” army rapidly degenerated, succumbing to drunkenness and looting. Unable to agree terms with the Russians and rebuffing his commanders’ proposal to winter in the city, Napoleon and his troops quit Moscow on October 19. 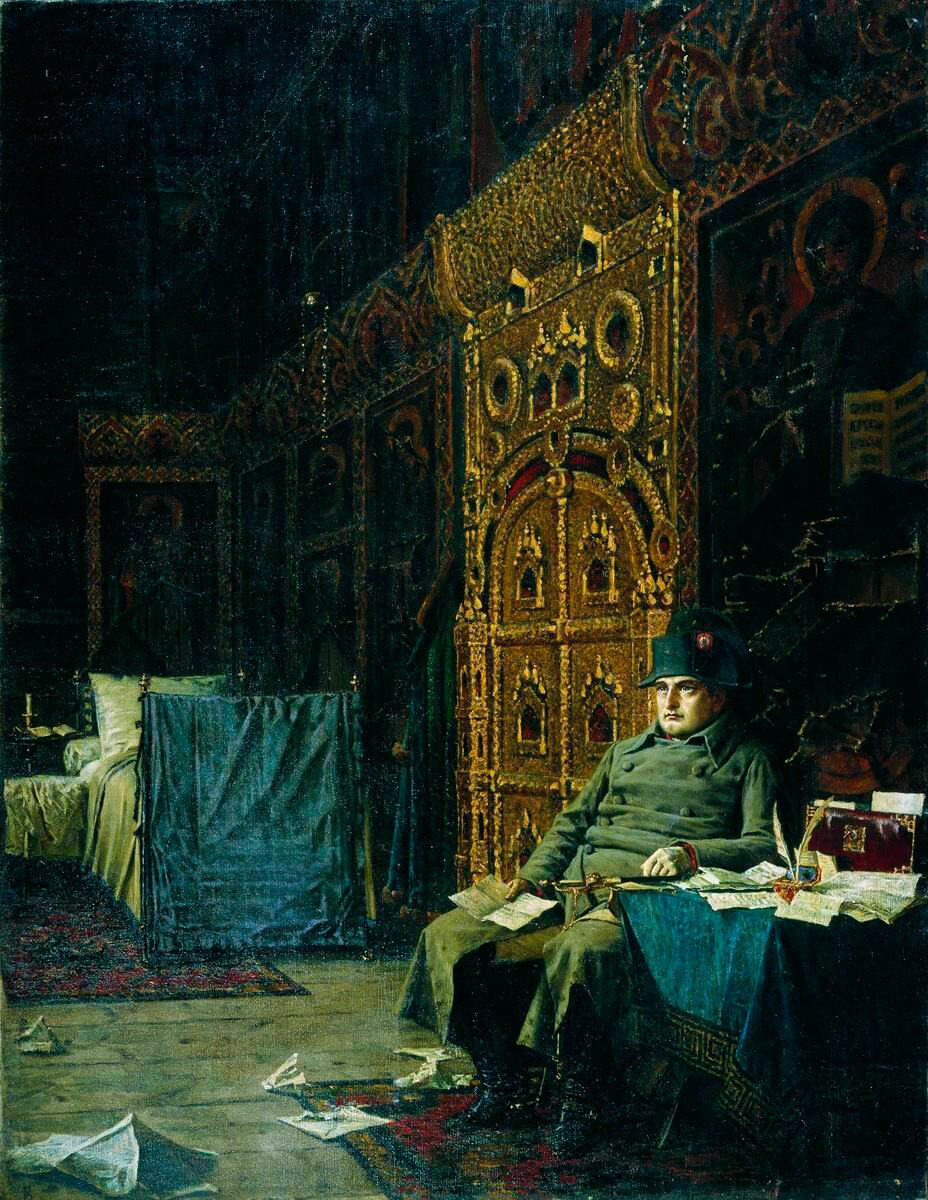 The French intended to make a push southwest towards Kaluga, where food supplies for the Russian army were located. On October 24, in the small town of Maloyaroslavets, they clashed with troops dispatched by Kutuzov to intercept them.

“At every step we encountered severed arms and legs; crushed heads run over by field guns lay around on the ground,” recalled Eugène Labaume, an eyewitness of the battle. “Smoking ruins were all that was left of the houses, under the burning embers of which half-disintegrated skeletons could be glimpsed.” Although the town remained in the hands of the French, heavy losses prevented them from continuing their advance. Napoleon turned back onto the Smolensk road, to which his troops had previously laid waste. 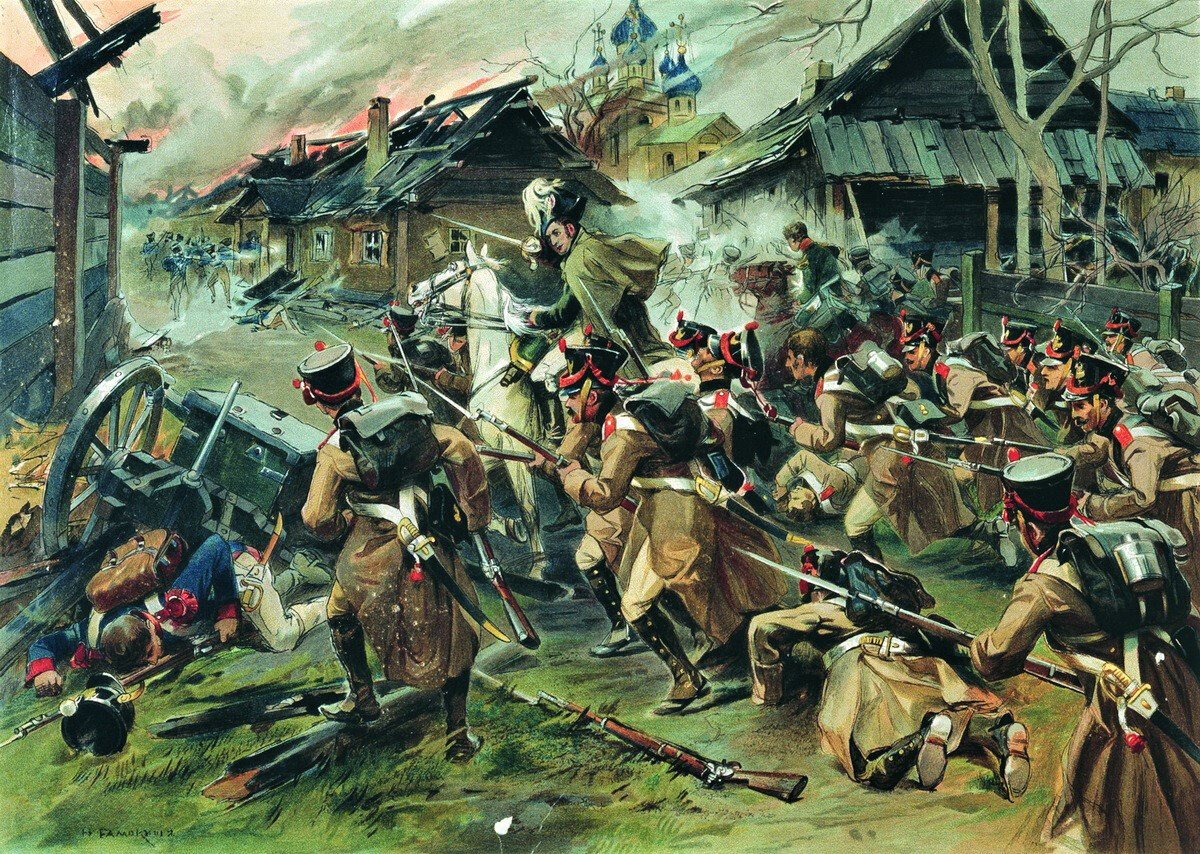 The Battle of Maloyaroslavets on 24 October 1812.

Several Russian armies pursued the retreating enemy, but kept their distance and bided their time before striking. “Flying” units of partisans did not give the French a moment’s peace and stragglers were likely to end up impaled at the end of a peasant’s pitchfork.

In mid-November, near the town of Krasny, the Russian troops managed to cut off and defeat the corps commanded by Prince Eugène de Beauharnais and marshals Louis-Nicolas Davout and Michel Ney. French losses were 10,000 dead and another 26,000 wounded. “At the mere appearance of small detachments of our troops on the highway, whole throngs of French hastily threw down their weapons,” Denis Davydov asserted. 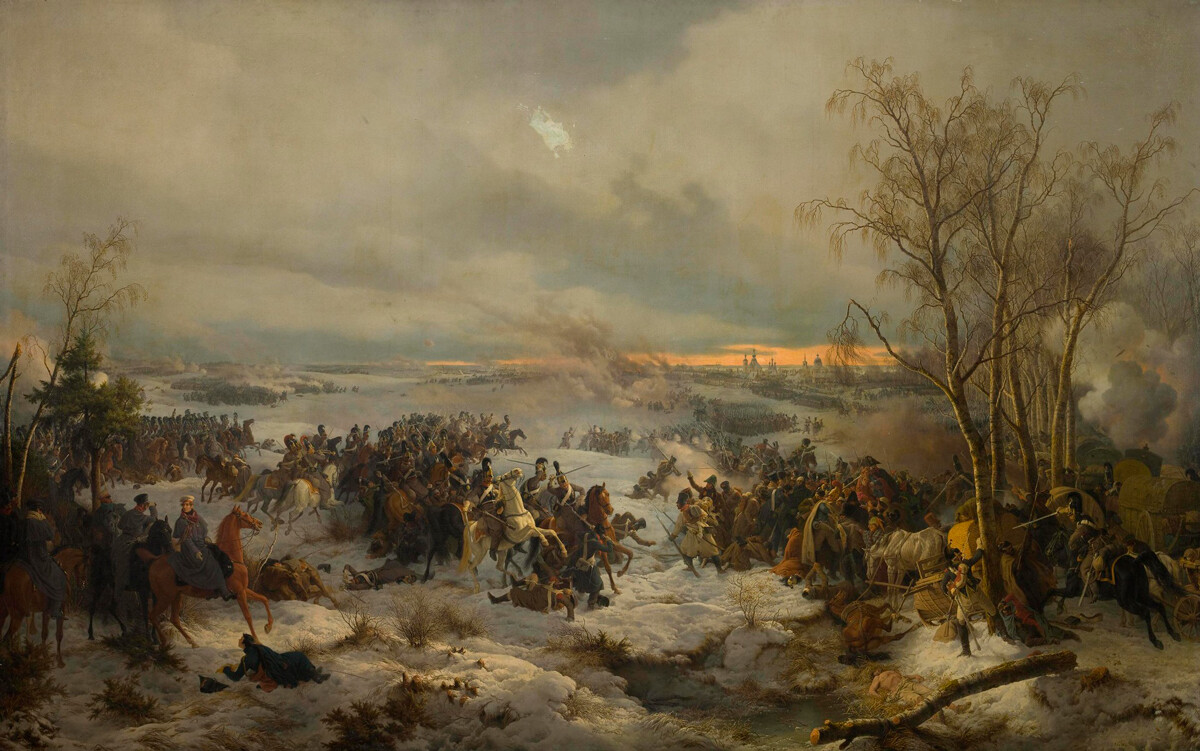 On November 24, the 80,000-strong French army (only half of which could still hold a weapon in their hands) reached the River Berezina. Beyond it lay a direct route to the frontier of the Russian Empire and the Duchy of Warsaw, which was allied to Napoleon.

“Everyone was only concerned about their personal survival,” recalled officer Vionnet de Maringone. “The bonds of discipline had been irreparably weakened. Order had broken down: to get to the bridge, the strong would knock over the weak and scramble over their corpses. People pushed their way to the crossing in a disorderly rush; and so, before getting onto the bridge, they had to clamber over piles of bodies and debris; many wounded or sick soldiers and women accompanying the army were pushed to the ground and trampled underfoot: hundreds of people were crushed by pieces of ordnance.” 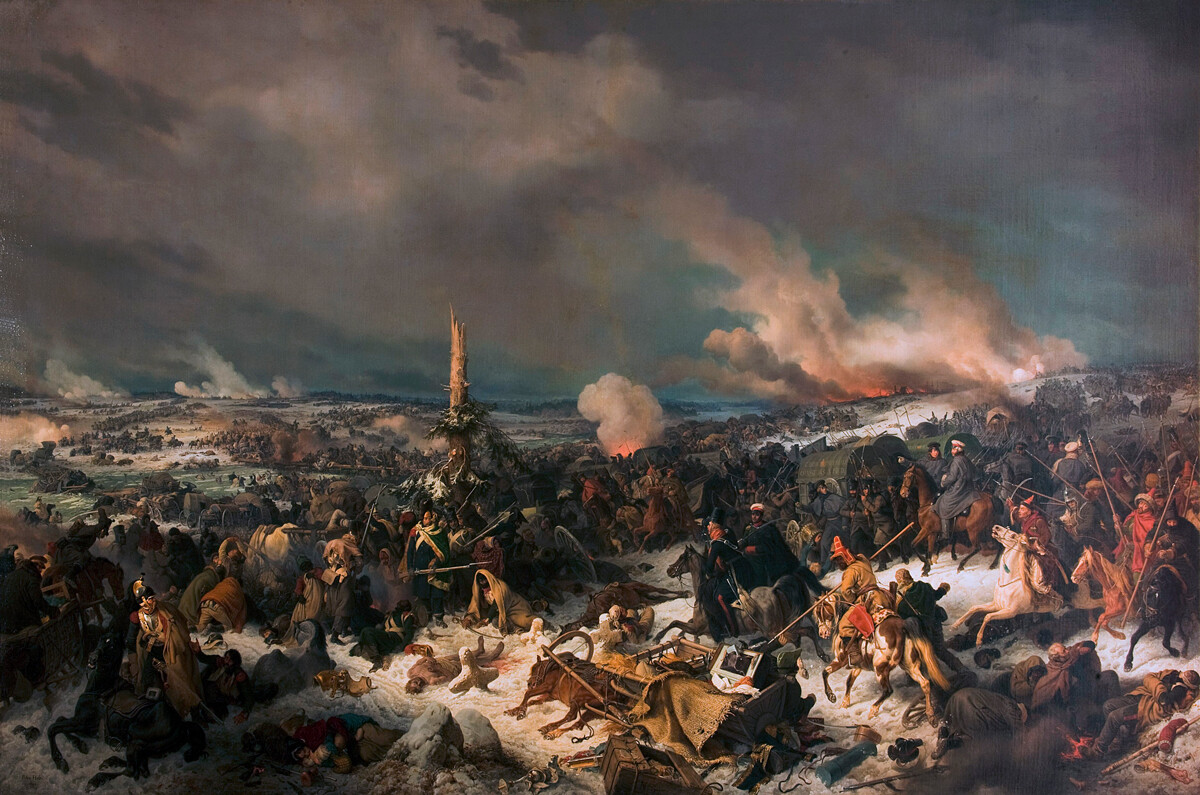 Crossing the Berezina River on 29 November 1812.

The advancing Russian armies attempted to spring a trap for the French, but the Emperor, his staff, the Imperial Guard and a part of his troops still managed to flee westwards. The remaining forces were much less fortunate: Around 50,000 men perished fighting, were taken prisoner or drowned in the freezing waters of the Berezina.

The Grande Armée had ceased to exist, but, even after this terrible blow, Napoleon was not irrevocably beaten. Russian troops had to cross the whole of Europe, shed much blood and enter Paris to ensure the French Emperor finally abdicated. 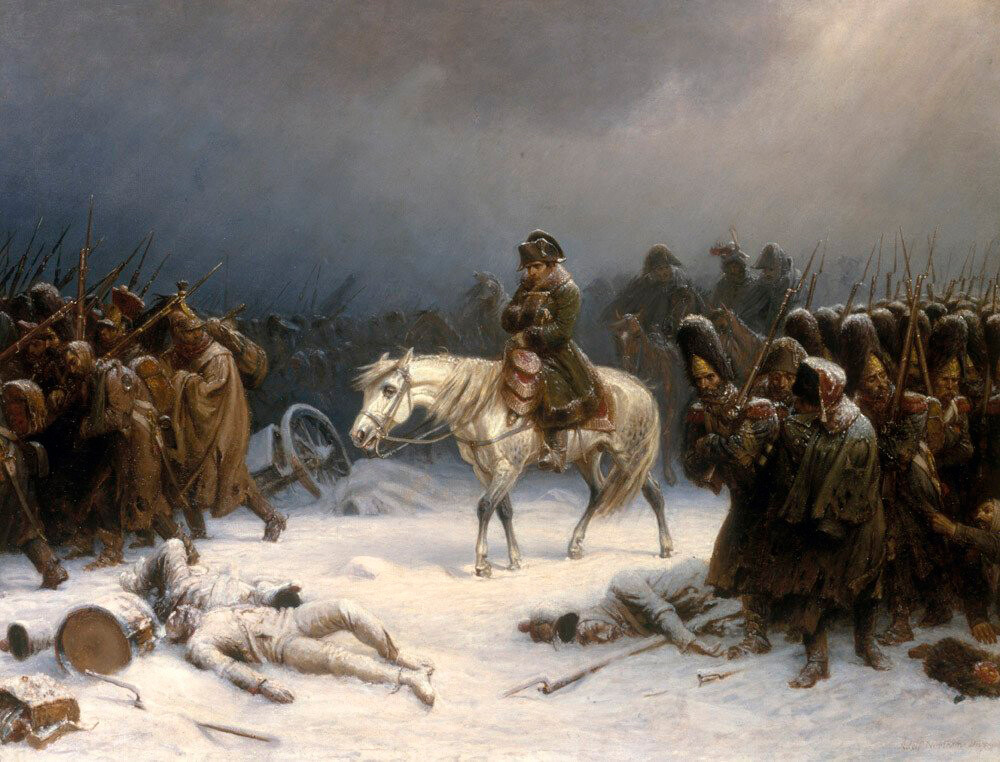