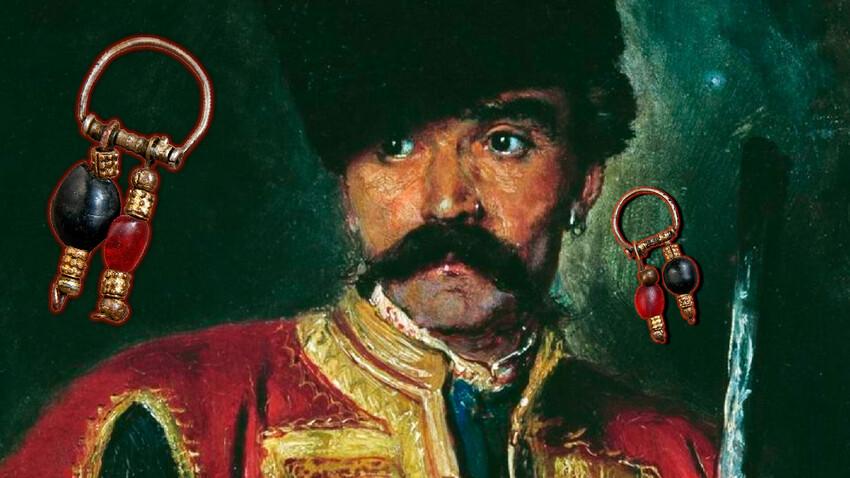 Russia Beyond (Konstantin Makovsky / Sumy Art Museum after Nikanor Onatsky, Ukraine, Sumy; State Historical, Architectural and Art Museum-Reserve "Alexandrovskaya Sloboda")
For a prince in ancient Russia, an earring was commonplace – just as it was for a Russian cavalryman during the Napoleonic wars. And, in Moscow Tsardom, men’s earrings were a treasure that could be inherited, as well as a sign of status.

“Svyatoslav appeared, crossing the river in a Scythian boat. He sat on the oars and rowed with the others, looking just like them. His head was bare, but a patch of hair was hanging down on either side of it – a sign of nobility. He looked sullen and wild. In one ear, he had a gold earring; it was decorated with a carbuncle framed by two pearls.” This is how Byzantine historian Leo the Deacon describes Svyatoslav Igorevich, Grand Prince of Kiev, during Svyatoslav’s meeting with the Byzantine Emperor John I Tzimiskes in the 10th century.

A sword and an earring make a man 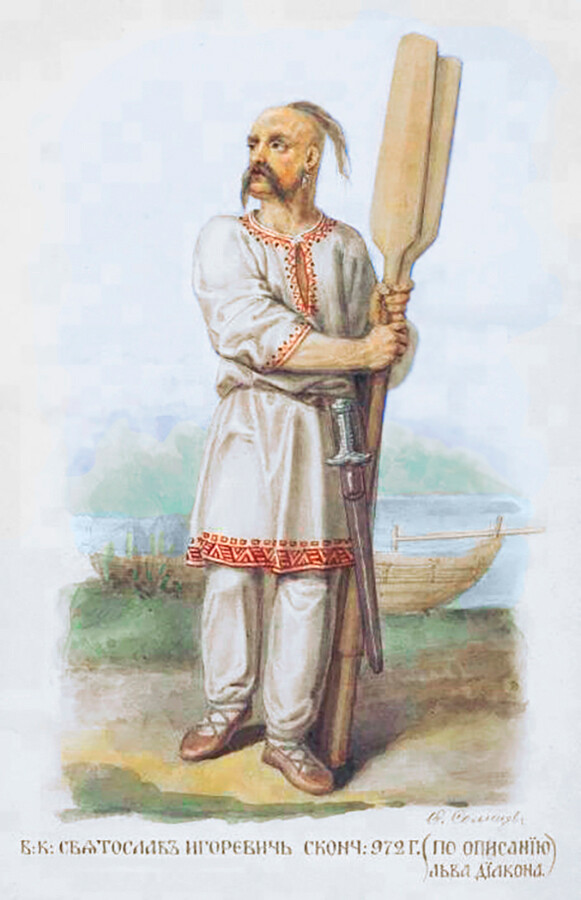 Prince Svyatoslav of Kiev, a 19th-century reconstruction by Fedor Solntsev after the description by Leo the Deacon

Russian warriors have been piercing their ears since ancient times. In the culture of different peoples, it was a protective, magical action. A warrior’s earring was originally worn as a talisman against evil forces, but also as an indicator of his status. The more expensive and intricate the jewelry, the more beads or precious stones on the earring, the more noble its owner was. Leo the Deacon, describing Svyatoslav’s appearance, notes that “his clothes were white and differed from others only in their purity”, so a gold earring was the most expensive accessory this ruler of Kievan Rus’ wore.

Wearing an earring in the ear of a man was popular among the Alans, the Volga Bulgars, as evidenced by the excavations of the burials. It is known that Scythian tribes had earrings with a mushroom-shaped cap, worn both by men and women, apparently as a sign of belonging to a tribe. Earrings were worn in the Golden Horde and, from there, they also spread to Russia. At first, earrings that had just one link were popular. Later, from the 14th century, earrings started having a downward rod or pendant on which one or several beads were strung. In 1358, in his will, Prince Ivan Ivanovich bequeathed to each of his two sons one golden earring with pearls. 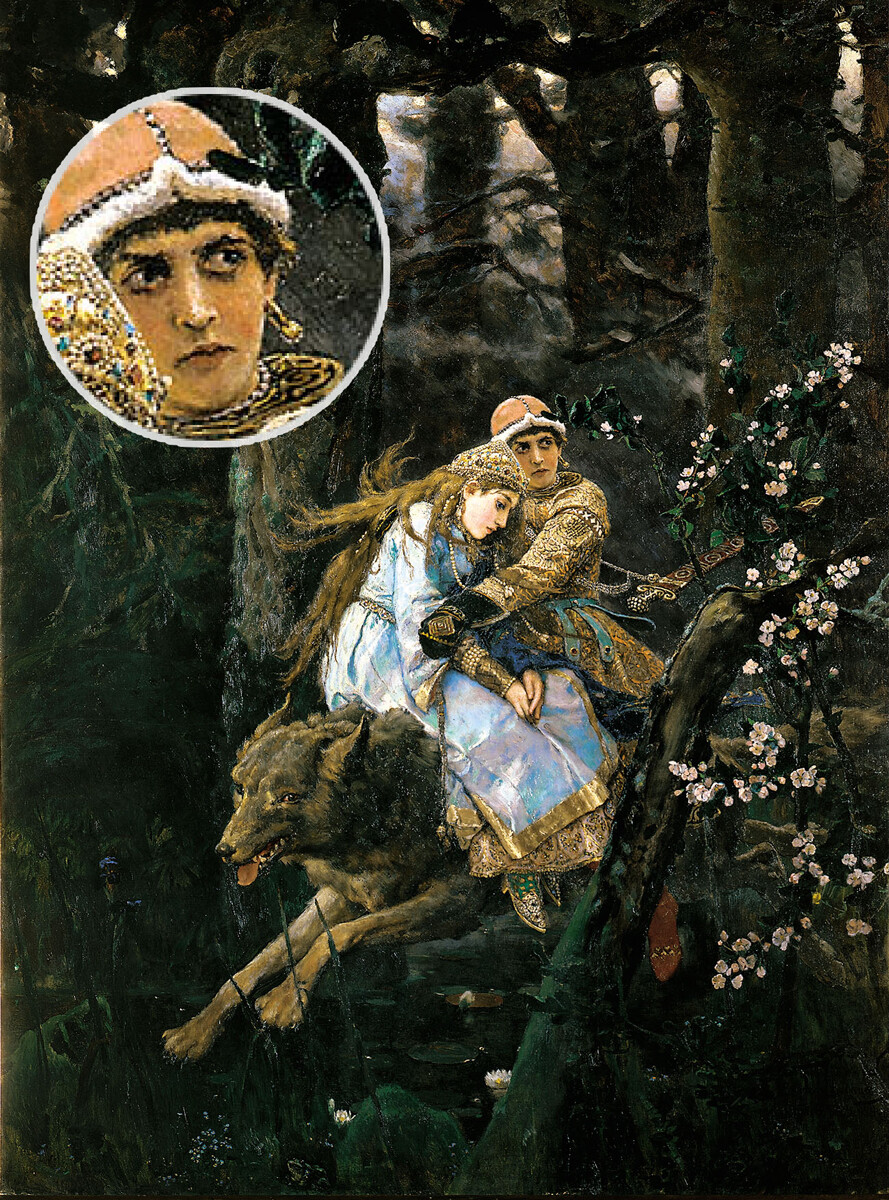 From the 16th century, double and triple earrings started to appear, with two and three links, respectively. In the description of the treasury of Prince Dmitry Ivanovich of Uglich we can find “big” and “triple” earrings with sapphires, amethysts, rubies and pearls, made in Novgorod and the Middle East. Earrings were made of gold, silver, copper alloy, covered with gilding and necessarily decorated with pearls.

Of course, earrings in Russia were not only worn by nobility. Simple copper earrings in the form of an unclosed crescent were also worn by common men. In the 17th century, a “broken” earring is mentioned among the property of a simple peasant – proof that even tainted jewelry was valued and kept in peasant families. 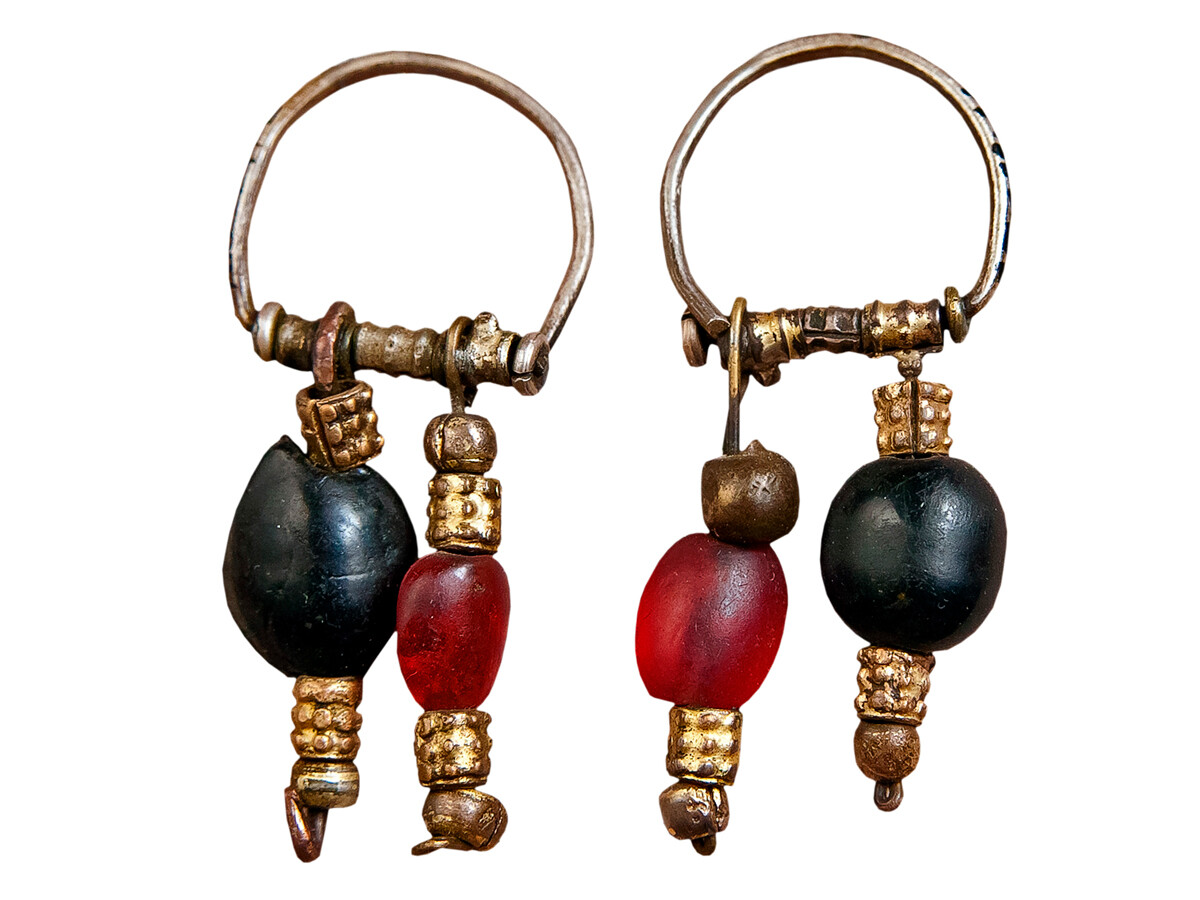 And what about Russian women? As archaeologist Natalia Zhilina writes: “In Slavic-Russian women’s attire, large temple rings, fastened with a metal wreath, were common; in the 8th century, miniature earrings of Byzantine type spread.” However, Russian noble women in the 14th-15th centuries did not wear expensive earrings. Their posh jewelry of choice was a ryasna – metal pendant fastened to the headgear. By the 17th century, almost all women, even little girls, wore earrings. 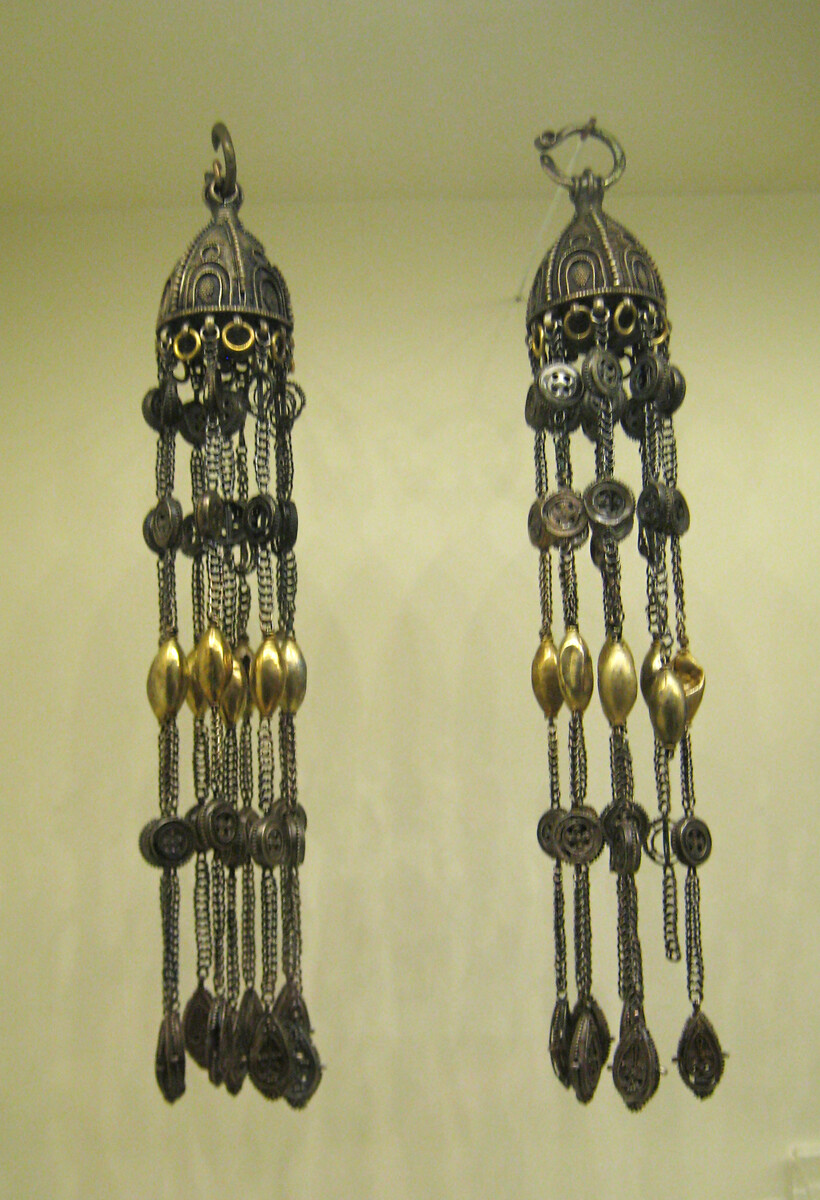 It is known that, in the 16th century, Prince Ivan Borisovich of Ruza inherited several expensive earrings with sapphires and rubies from his mother and gave them to his sister, who was deprived of her dowry. That is to say, earrings in those days did not have any rigid gender identity. Precious women’s earrings became popular again in the 16th-17th centuries, already under the influence of European culture – in the descriptions of the property of Tsarina Anastasia, the first wife of Ivan the Terrible, “different types of earrings” can be found.

‘An earring for a dear friend’ 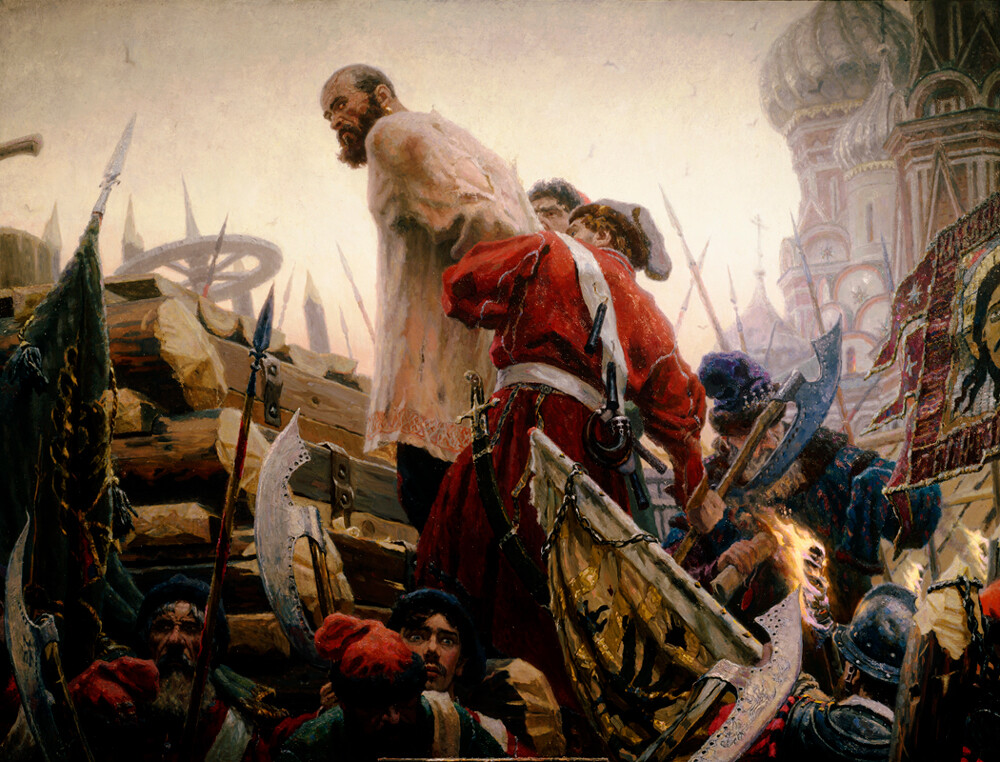 As the borders of the Russian state expanded, there were more and more Cossacks – free people who were simultaneously farmers, traders and soldiers of the Cossack army that guarded the borders of the country. Among them, earrings became a mark of distinction in the ranks.

An earring in the left ear was worn by the only sons in the family (although he could have sisters). Earrings in both ears indicated an only male child (without any siblings). And an earring in the right ear was a sign of the last man in the family. Cossack commanders tried not to recruit such men (with right-eared earrings) on dangerous missions or in the thick of battle. 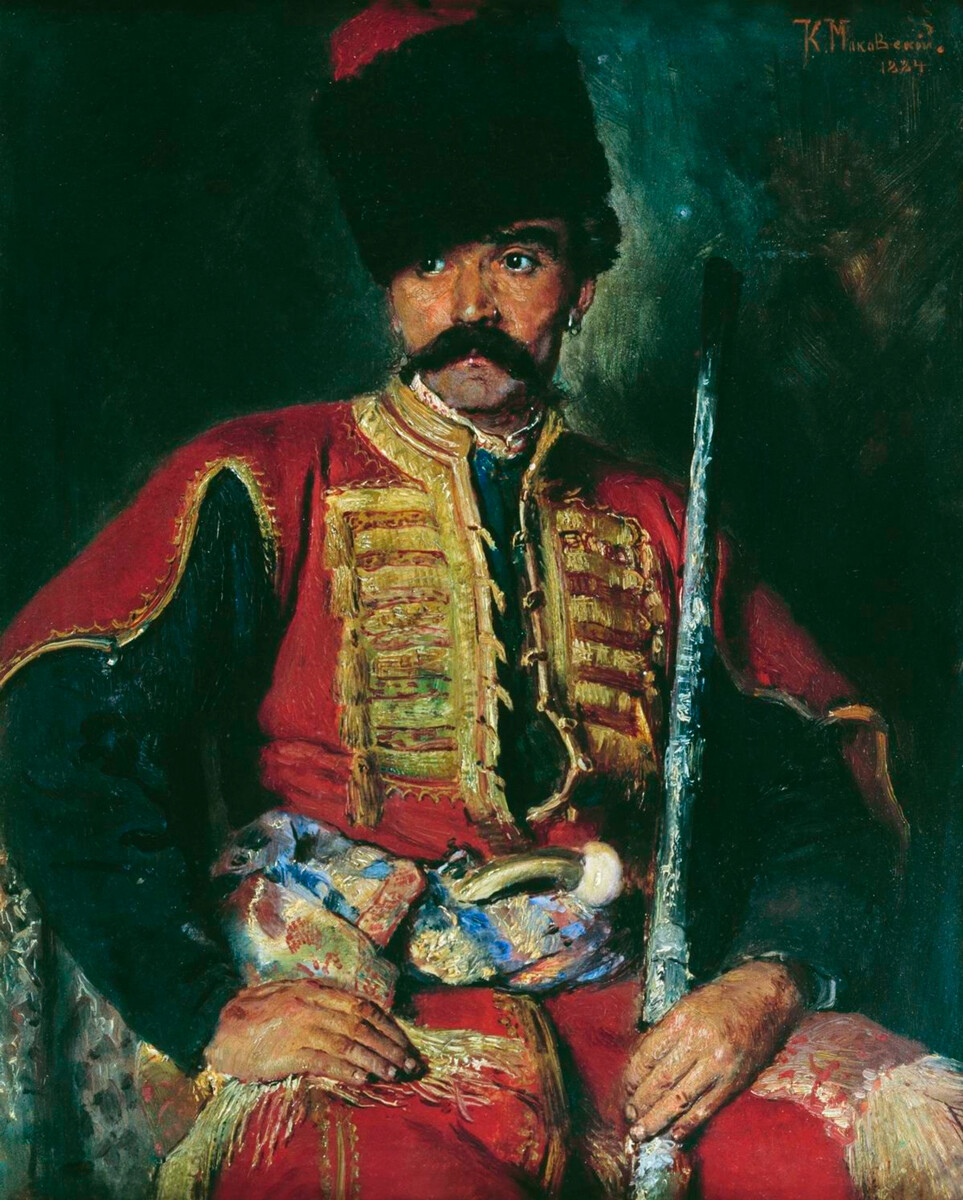 "The Zaporozhian Cossack" by Konstantin Makovsky

Men’s earrings of the higher Russian nobility went out of fashion for a while in the 17th-18th centuries: at that time, they were mainly worn by the Cossacks, as well as European sailors, soldiers and craftsmen, whose number was growing in the Moscow Empire. For artisans from the German lands, a golden earring was often for a “rainy day”, as it was difficult to lose and one could pawn it, sell it or, in desperation, drink it away. 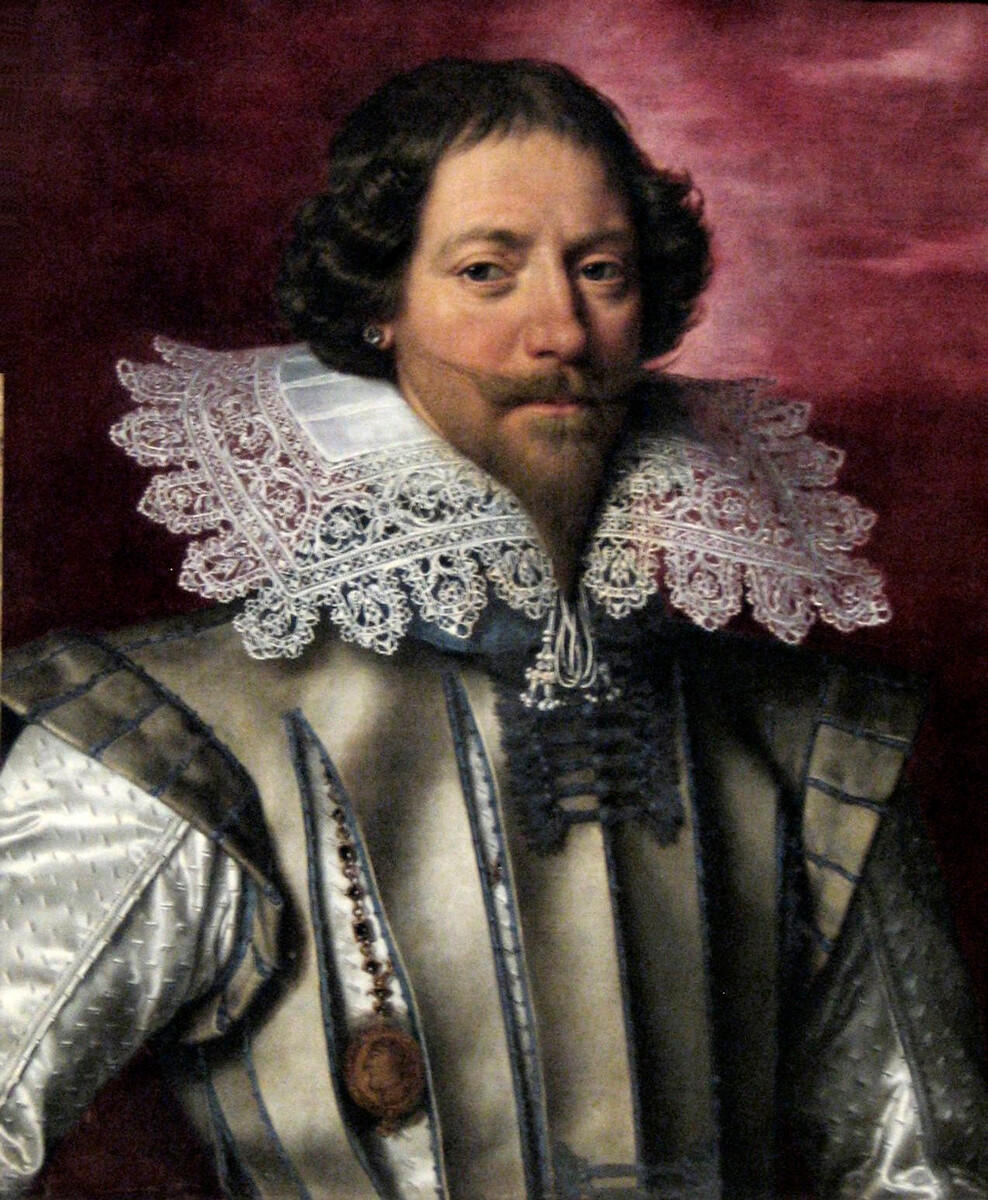 In the beginning of the 19th century, men’s earrings became fashionable again, first in military circles. Writer Mikhail Pilyaev recalled that this fashion came “from the Caucasus, from the Georgians and Armenians”, where the Caucasian War was being waged, through the battles of which many Russian officers had to go through. “The fashion for earrings especially flourished among military men in cavalry regiments and it is difficult to believe that the hussars of former years, those famous ‘dashing drinking companions’, all followed this female fashion and not only officers, but also soldiers wore earrings,” Pyliaev wrote. It was considered, by that time, “women’s” fashion, because the military wore the jewelry of their beloved ladies – as a talisman and a sentimental gift. “It is assured,” wrote Pyliaev, “that the famous proverb ‘for a dear friend – even an earring from the ear’ was invented at that time by soldiers.”

Earring in the USSR 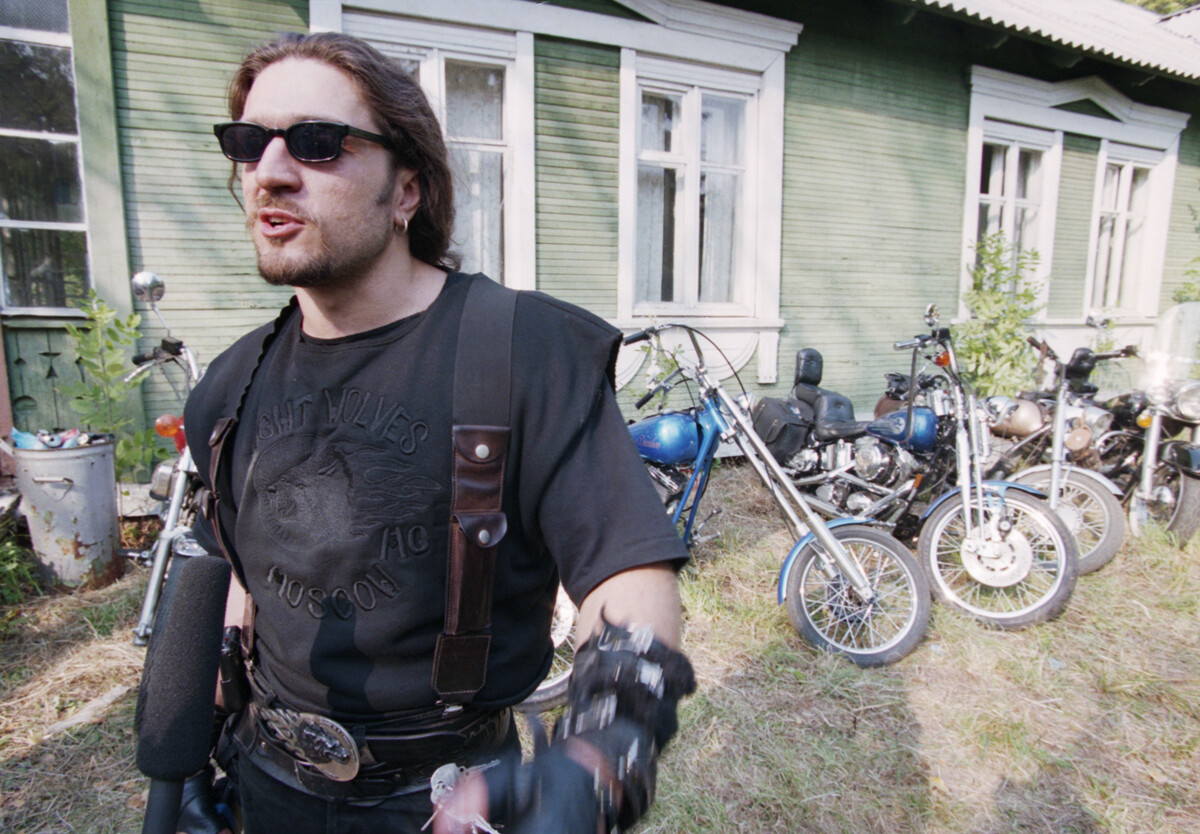 By the beginning of the 20th century, an earring in a man’s ear was already an attribute of only a Cossack or a Gypsy. “He wore a silver crescent earring in his left ear, his raven-colored beard and hair didn’t fade until his old age and, in his anger, he was usually forgetting himself…” This is how Mikhail Sholokhov describes Pantelei Prokofyevich, a Don Cossack, in ‘And Quiet Flows the Don’.

In the Soviet state, especially with the tightening of living conditions in the 1930s, any details of a man’s appearance that could also be found in the image of a woman began to be harshly rejected. Soviet officials and workers did not even wear rings – it was considered “bourgeois”, a “decadent” bliss. Even wedding rings went out of fashion in the first decades of the USSR.

Male Soviet workers were strong and masculine, while the working woman had just thrown off the shackles of domestic slavery – so jewelry somehow did not fit with the image of such Soviet citizens. And although women’s jewelry was gradually returning and becoming more intricate through to the 1950s and beyond, men’s jewelry remained a sign of the “beautiful life” for a long time. In the Soviet crime comedy ‘The Diamond Arm’ (1969), the chief of the mafia wears expensive rings and signets, a clear attribute of a scoundrel in Soviet society. 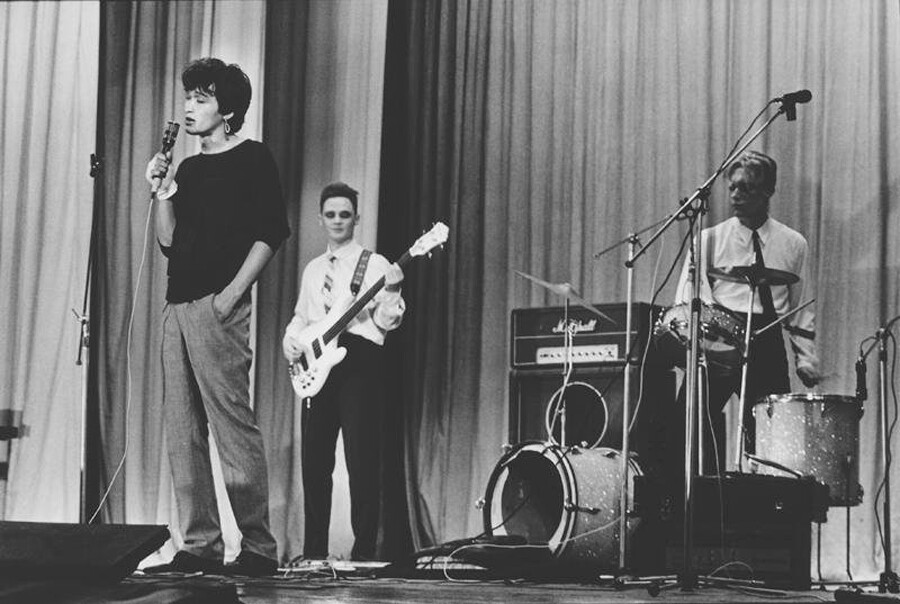 Of course, rings were worn by petty criminals, speculators, etc. But an earring in a man’s ear remained unthinkable in the USSR for a long time – even hippies did not dare to wear one. In the face of widespread homophobia, which was inculcated by the state itself, a simple earring made its male wearer a victim of the very first street gang.

It was only in the 1980s that the earring returned to the ears of Russian punks and rock musicians, but only to the left ears. Up until recently, the earring in a man’s right ear was a hint of an alternative sexual orientation, but, since the 2010s, with the globalization of world fashion, this distinction has almost disappeared. Men in Russia now, as in the rest of the world, often wear not only earrings, but also tunnels in their earlobes, taking on a truly tribal appearance. Ancient Russian warriors and Cossacks would surely approve of that!