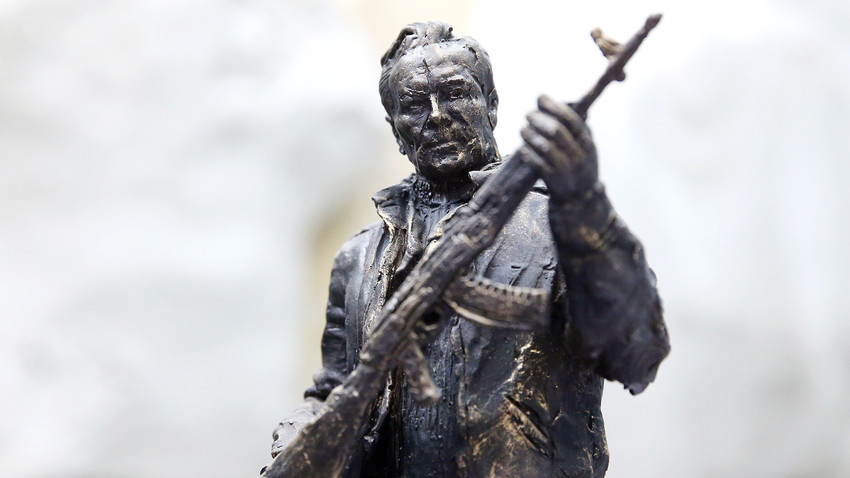 Named in honor of the year it was designed, 1947, the AK-47 rifle spread rapidly around the globe in the 1960s, and became the main weapon in many national armies, as well as among insurgents.

Artyom Geodakyan/TASS
The AK-47 is the world’s most popular and deadliest small arms in history.

The sculpture shows Kalashnikov holding his most popular and celebrated creation, the AK-47 automatic rifle.

Named in honor of the year it was designed, 1947, the AK-47 rifle spread rapidly around the globe in the 1960s, and became the main weapon in many national armies, as well as among insurgents, and has since played a crucial role in virtually every war and conflict. Easy to assemble and use, the AK-47 is famous for its rapid-fire ferocity and accuracy, minimal weight, and unprecedented reliability.

The simple design not only made it possible to spread production to various countries, but also made the rifle easy-to-use for all types of fighters, from professionals to amateurs. The fact that every schoolchild in Russia is trained to disassemble and reassemble the AK-47 in just a few lessons is indicative of how simple it is to use the rifle.

The monument’s architectural composition also includes a model of the globe and St. Michael the Archangel striking the devil with his spear.

“This spear symbolizes the rifle, and taken together [the globe and the spear] are symbols of peace preservation and of the victory of the forces of good over evil,” said Salavat Scherbakov, the monument’s author.

Scherbakov’s most famous sculpture, the 26-meter monument to Vladimir - also known as Vladimir the Baptist, St. Vladimir and Vladimir the Red Sun - was unveiled in November 2016 near the Kremlin.

Kalashnikov’s new monument is located in the northern part of the Garden Ring, on the crossroad of Oruzheiniy Lane and Dolgorukovskaya Street.