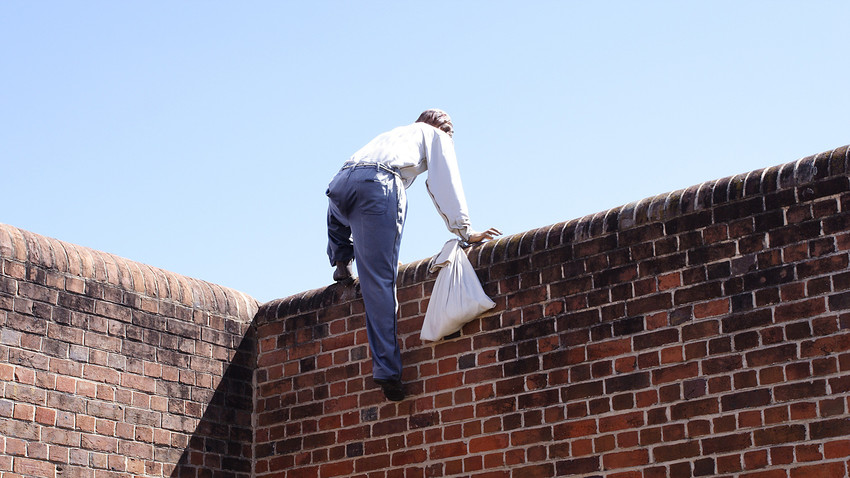 Everyone knows the situation: You have a date but nothing to wear. Well, perhaps you should (or shouldn’t) take a leaf out of this guy’s book.

Getty Images
Samovars, duct tape, cartoons…these thieves will stop at nothing to get their hands on the loot.

This daring robbery was organized by a Russian daredevil in Astrakhan (1,400 km south of Moscow) and it’s fair to say it’s pretty ridiculous. The guy robbed the apartment of his friend who had coincidentally been arrested for violent behaviour earlier that day (what are the chances?). He stole a TV, fan, DVD player, and no more than 31 DVDs... of cartoons.

Sadly, he didn’t get the chance to settle into an animation film night after the ex-wife of his arrested friend visited the empty apartment (what are the chances?) and called the police who promptly hunted down the prime suspect and put him in cuffs.

Everyone knows the situation: You have a date but nothing to wear. Well, perhaps you should (or shouldn’t) take a leaf out of this guy’s book. The 26-year-old man from Irkutsk (5,200 km east of Moscow) was keen to impress a girl after they arranged to meet up but his wardrobe was looking a little bare. So he simply walked into a clothes shop, choose some new threads, and changed into them in the fitting room - he then walked out as cool as a cucumber sporting a new coat, pants, sweater, and scarf without paying.

It wasn’t until later than the shop employees realized what had happened. They found a bag of old clothes in one of the rooms - this was all the police needed to track the young Casanova down. Unfortunately, we don’t know if the lady of choice succumbed to the charms of the savvy seducer before his arrest.

Even British film director Guy Ritchie – famous for plot twists – would have been surprised after hearing the story of these two petty theifs from Irkutsk. The opportunist pair noticed a handbag in a parked car, smashed the window, and grabbed the loot. Inside the bag was a passport and set of apartment keys - so the criminals noted the address in the document and headed straight for the flat hoping to have another bite at the cherry. By the time they arrived the car owner had already found out what happened and informed her father, who was waiting at the apartment armed with a iron frying pan.

He took the villains by surprise and knocked them out. Revenge really is a dish best served cold.

It can get quite boring at a provincial recreation camp in Russia and a stray romantic Russian soul can be easily distracted. In December last year a half-cut man broke into a closed restaurant in one camp and stole a rather unique bag of booty: A guitar, five samovars, one dish, and two bottles of vodka. He may have been planning a boozy sing-song around a campfire but unfortunately he didn’t get the chance to impress with his singing skills. The 20-year-old was collared by the police soon afterwards.

Carrying cash around town can make you a target, but in Russia it seems danger is never far away even if you’re transporting seemingly valueless objects. In Moscow, two men hijacked a van carrying 150 boxes of duct tape by threatening the driver with a knife. They ordered him to take the van to a place where their mates were waiting - and they promptly unloaded the haul. The driver was then sent on his way, after the criminals nicked his phone and cash, in his empty wheels. Any guesses why a group of thieves would want so much tape? Perhaps they’re electricians and came unstuck...