How to behave in a Russian Orthodox church 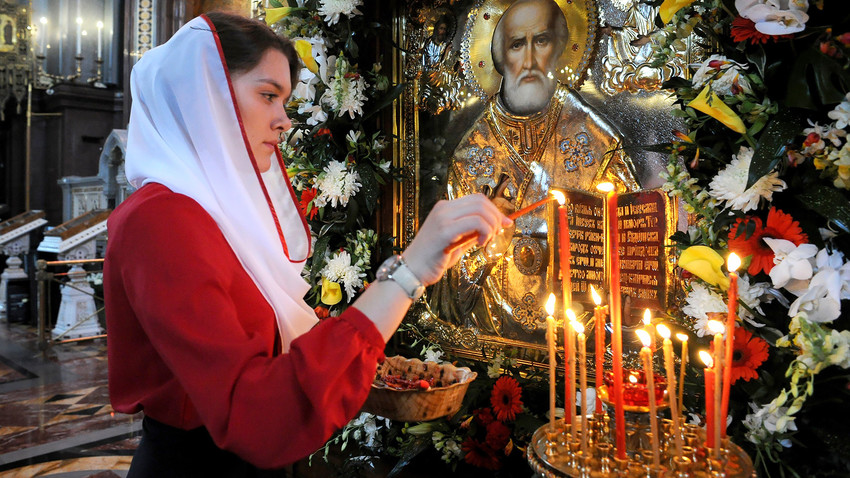 There are some rules that one should know before visiting

Andrey Lyubimov/ Moskva Agency
Russia has countless shrines and monasteries: Ancient, modern, wooden, stone, churches on cliffs....The overwhelming majority of them are Orthodox, and their doors are open for everyone. However, there are some rules that one should know before visiting.

Do not quarrel with believers

The first thing a visitor should know when he or she is inside an Orthodox church is that you shouldn’t irritate the parishioners. Even if you know you’re right and they are not. For example, there is no official ban on taking photographs inside a church, but this is something that can distract or annoy the churchgoers (especially if you use a flash or if everyone hears the typical sounds of the shutter). Someone can order you to put the camera/phone away. Be respectful. The worst thing is to start arguing. Do not forget that in Russia there is a law on offending the rights of believers. 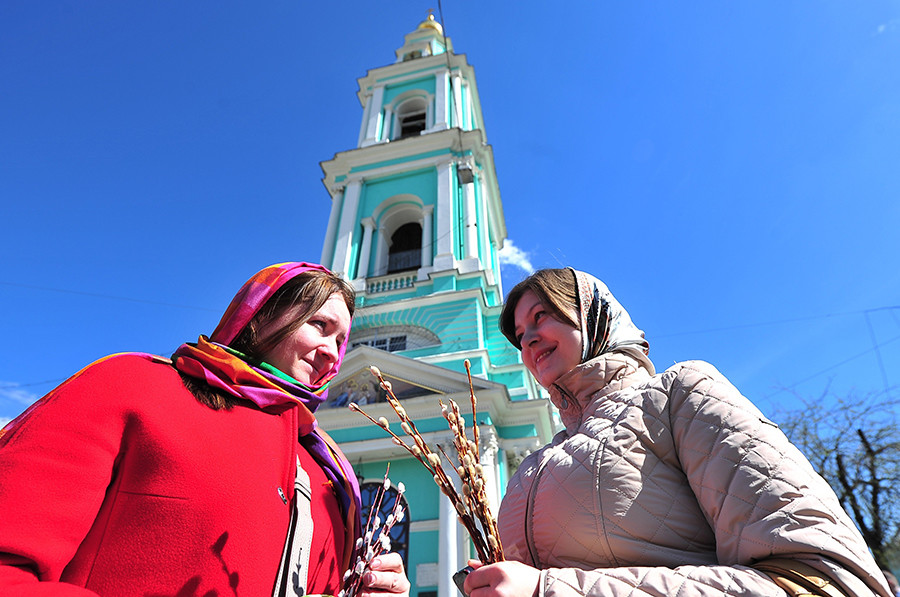 There is no official ban on taking photographs inside a church, but this is something that can distract or annoy the churchgoers.

If you are a man, remove your hat before entering the church. Women usually cover their heads with a veil.

Actually, according to canon law, the veil concerns only married women since it symbolizes the husband’s power over his wife. But the original symbolism has been forgotten and now everyone covers their heads: Women, young ladies, and girls.

Women should also not enter the church in revealing clothing and bright makeup. And when visiting convents, women should wear long skirts.

If you are a tourist and have come to the church solely out of curiosity, then enter calmly. But if you want to look like a real Orthodox believer, then you should know the following:

Firstly, before entering the church, cross yourself and bow three times. You have to put the first three fingers together and touch your forehead, then your stomach, then the right shoulder and the left. Cross yourself again after you’re inside.

A common mistake is crossing yourself and bowing simultaneously. You should bow in between the crossing. Your mistake might be noticed and it’s possible a churchgoer may come over and give you some instructions. 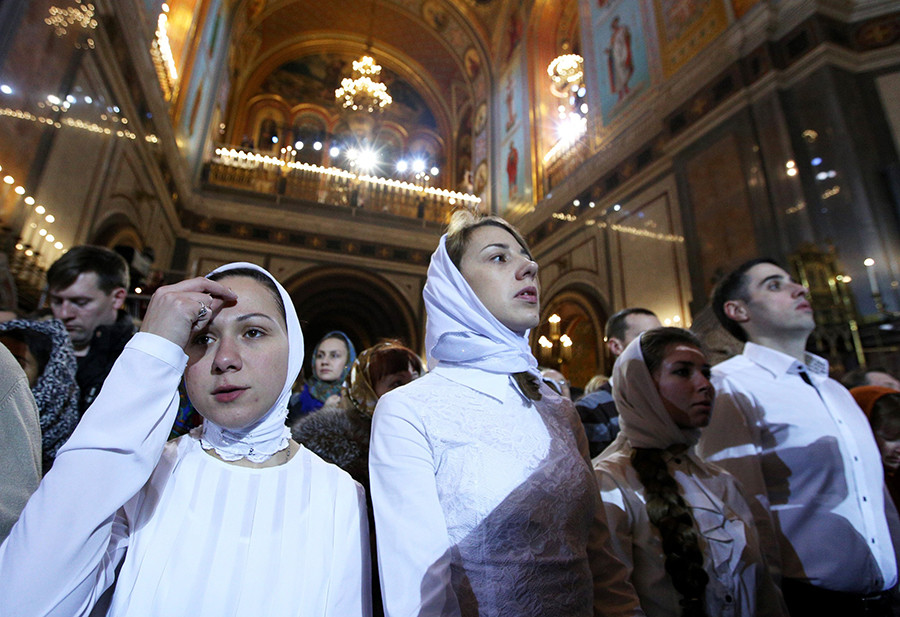 A common mistake is crossing yourself and bowing simultaneously.

Do not speak on the phone

It is better to switch your phone off altogether or at least turn off the sound. It is customary to remain silent in the church. Whispering is acceptable, but only when necessary. If your ringtone violates the church’s silence, it is really bad. All the praying babushkas will look at you with disapproval.

Do not run, recite your own sermons, stage performances (remember Pussy Riot?) or play Pokemon Go.

Walk slowly inside the church. During it is better not to walk or pray near the icons. In accordance with the Orthodox tradition, it’s necessary to remain standing for the whole ceremony (usually, if there are benches and chairs by the walls, they are for those who physically cannot stand), which normally lasts about one and half hours. 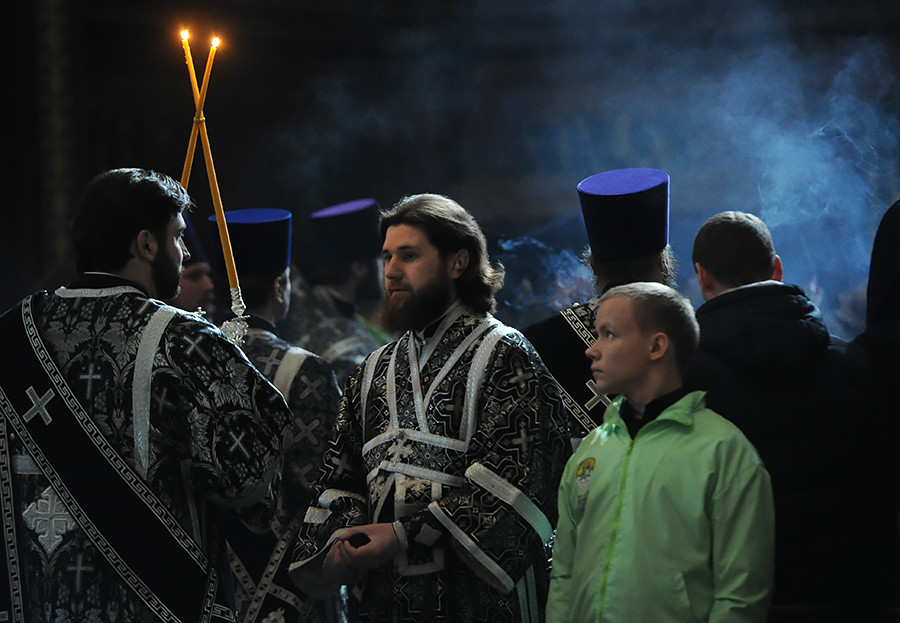 Do not run, recite your own sermons, stage performances (remember Pussy Riot?) or play Pokemon Go.

The altar is a forbidden spot

The altar is the space that is blocked off by the iconostasis wall: It is categorically forbidden to go there. The same goes for the – an elevated platform (usually with steps) in front of the altar and iconostasis. Clergymen can step onto the if the priest requests it, while only priests and male clergy members can go inside the altar.

You should also not turn your back to the altar. Churchgoers usually turn around lightly and slowly move towards the exit. But hardly anyone follows this rule since it is rather difficult to walk out this way.

As a rule, each saint has his “sphere of responsibility.” Those who pray for health, light a candle to the Mother of God, the Savior or St. Pantaleon. John the Revelator is the patron of creativity. Students light candles to Sergius of Radonezh before exams. And those who pray for repose light a candle to the Crucifix, which is always by the entrance.

If you see food on a stand in the church, this is not a buffet for the churchgoers. It can be prosphora (liturgical bread), but it’s only for those who have received communion. Many churches also collect food and then give it out to needy parishioners.

Obviously, you must also not eat food that you bring with you.

Actually, Russia is a multi-confessional country, but most of its citizens (75 percent, according to surveys) are Orthodox Christians. Read more about it here.

russian orthodox church How to