Lying on the floor and changing in the WC is now forbidden at Moscow airports! And not only this… 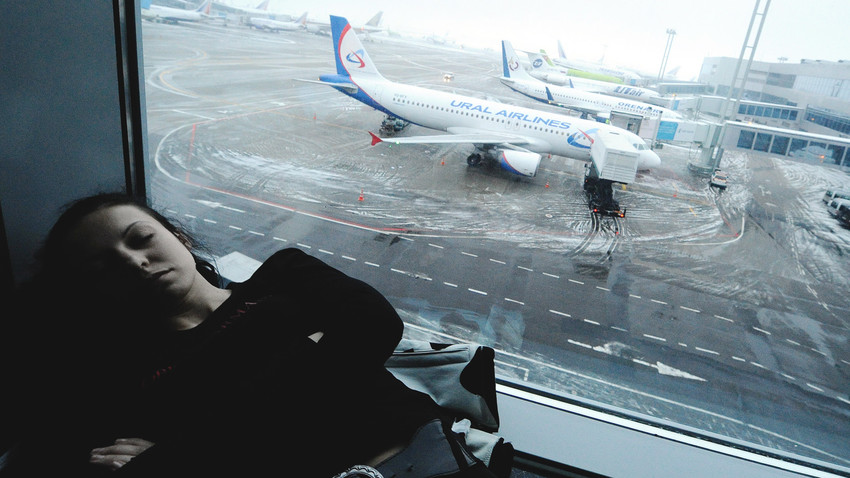 Stanislav Krasilnikov/TASS
New rules have come into effect at three of Moscow’s airports. Here’s what you have to know before coming (or leaving).

If you ever wanted to suit up in a toilet cabin at one of Moscow’s airports or give your kid a fun ride on a luggage trolley, we have some bad news for you.

Three Moscow airports — Sheremetyevo, Domodedovo and Zhukovsky — have adopted new regulations (put forward by the city parliament) banning some activities and imposing fines for those who break them of 100-500 rubles ($1-6).

The law is aimed at ridding the airports of homeless people: it's forbidden to wear dirty or smelly clothes, or lie on the floor or seats. Changing clothes in a cubicle or washing in a basin is also out.

There’re some other things which don’t seem aimed at the homeless at all. For instance, zipping through the crowd on a gyroscooter is banned, too. As well as listening to loud music without headphones. Luggage trolleys should be used for their primary purpose only (sigh).

The new law has already caused some negative reactions from Internet users. "It's nonsense! What if I travel to a warm country in winter, I just have to change clothes! These rules were made up by someone who travels on a private jet, for sure!" Natalia writes.

Moms are worried if their child accidentally vomiting will be considered a violation of the new rules, while others see nothing criminal in sitting on the floor. "I saw lots of beggars at Paris airport recently; those guys smelled awfully, but neatly dressed youngsters sitting on the floor didn't disturb anyone!" Marina writes on Facebook.

People also wonder why they won’t be able to take a nap lying on the chairs (now that’s banned, too) during long layovers or if they arrived at the airport at 4 am but the flight leaves only at 7 am.

Still, there are some supporters of the new rules as well: "I once spent two hours at night at Sheremetyevo watching dozens of beggars walking around, sitting and sleeping on the waiting seats... I can't get the image out of my head and will never sit there again," Anna says.

- molesting passengers with offers of accommodation or taxi services

- putting up advertising, notices, or posters without the airport's approval

- blocking passageways, entrances and exits from the building with luggage

- using luggage carts not for their intended purpose, for example for transporting children

- wearing dirty or smelly clothes or carrying such luggage

- taking a shower, washing clothes or getting changed in inappropriate places

- taking animals to the airport, excluding guide dogs, service dogs or animals to be transported on the plane

- listening to music without headphones

- lying on seats, benches and floors