This is how Putin opened the Crimea Bridge (GIFS) 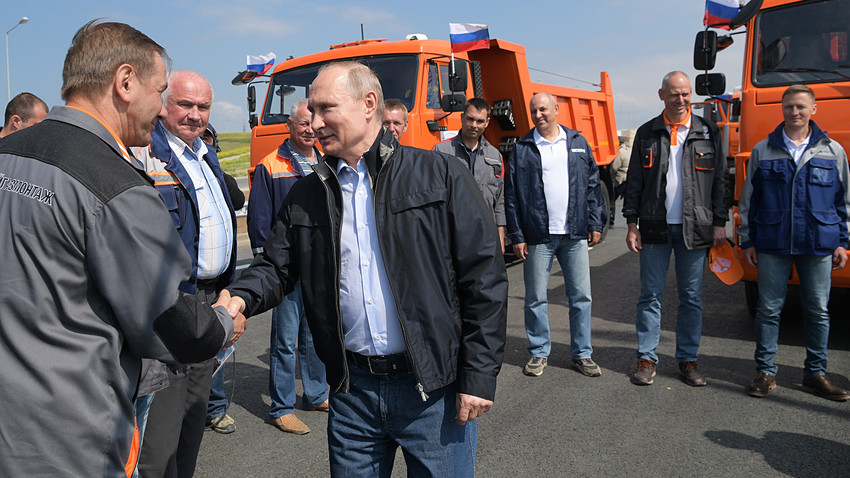 Alexei Druzhinin/Sputnik
The President of Russia ‘baptized’ the 19-kilometer-long bridge, which connects the Crimean peninsula with the city of Taman on the continent, by being the first to drive over it. Have a look at how it panned out in gifs.

May 15, was a special day for Vladimir Putin. He opened the longest bridge in Russia, uniting the Crimean peninsula with “the continent”. Putin became the first person ever to drive over the 19-kilometer-long bridge, with a giant orange truck his vehicle of choice (just because he can. Also, to test the road with a really big vehicle).

Here’s how it happened – watch every single step Putin made while opening the bridge.

In the middle of the day, the President arrived at the center where the works were being coordinated.

Time to hit the road – Putin walks out of the center, greeting workers and drivers, waving hello…

…and gets into the truck.

After Putin’s shouts “Let’s go!”, the motorcade blows its horns and sets off.

…and ride. It’s 19 kilometers, you know, and it takes some time to reach the other end of the bridge – even if you are Putin.

While driving the truck, the President was chatting to Alexander Ostrovsky (next to Putin, the man who actually managed the whole project), and a colleague of his. Internet users even started to joke: “I have no idea who these two guys are, but they must be tough if Putin is their chauffeur…”

Finally, they reached their destination, where Putin got out of the truck, looking pretty satisfied.

After that, the President made a short speech for workers, congratulating them on their success. Their work isn’t completely over, though – the railroad track has still to open next year. Nevertheless, abig step forward has been made – in Putin’s words, “ the miracle has finally become a reality.”

Here's what else we know about Putin's involvement in the opening.