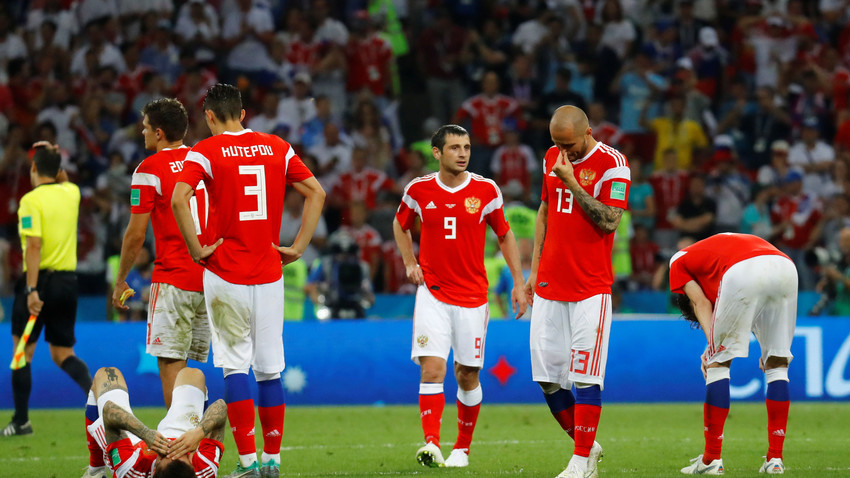 Croatia won fair and square but Russia's national team showed its best during the World Cup and made the whole nation proud.

Team Russia made the country proud in the quarter-finals of the World Cup on July 7 - but Croatia held on to win on penalties. It was heartbreaking to watch the host nation crash out after such a valiant campaign.

To say that the players were disappointed would be an understatement. For example, striker Artyom Dzyuba couldn’t hold back the tears while being interviewed after the match. But despite the outpouring of emotions the players and coach - Stanislav Cherchesov - conducted themselves with dignity.

“We feel like soldiers now being demobilized. But we would have been happy to continue our service until July 15 (the day of the final), you know,” Cherchesov joked at the press-conference. He went on to say: “The way Russia played during the World Cup makes the footballers, the fans, and the whole country proud.”

“Friends! We are leaving the tournament with tears in our eyes but keeping our heads up high. Thank you for believing in us, thank you for everything. You are the best fans in the world!” @TeamRussia (national team's official Twitter account) wrote.

The account also posted a photo of Ilya Kutepov’s bruised leg: The defender was playing with an ankle injury for most of the match. “This proves one more time that the team was doing everything it could and even more.”

Kutepov himself wrote on Instagram: “I’m filled with pride for the guys that traveled this road side by side, all the way! I feel pride for the managers, administrative staff, medics – everyone! Thank you country and thank you fans, for your support! We can do a lot when we’re together!”

Russian defender Sergey Ignashevich (the oldest player left in the tournament at 38) played every minute of Russia’s matches after a late call-up. He chose to announce his retirement from football after his team’s elimination: “That was the last match for me. I feel happy to finish on such a good note,” he said.

It’s fair to say that even the Russian national team never expected to go so far, nor did the fans truly believe it was possible to reach the quarter-finals. But now, after beating Spain and fighting to the end against Croatia, the perception of the team is different.

“Our national team was beautiful during this World Cup,” coach Yuri Semin says. “I think, after this World Cup people will stop just criticizing the team, as it happened just a month ago, and football will be supported in our country.”

Alexander Golovin, named the third biggest breakout stars by FourFourTwo magazine, summed up Team Russia’s progression pretty well: “Absolutely all of us gave all we could to achieve our goals. That’s the main thing, that’s why we are proud of our team.”