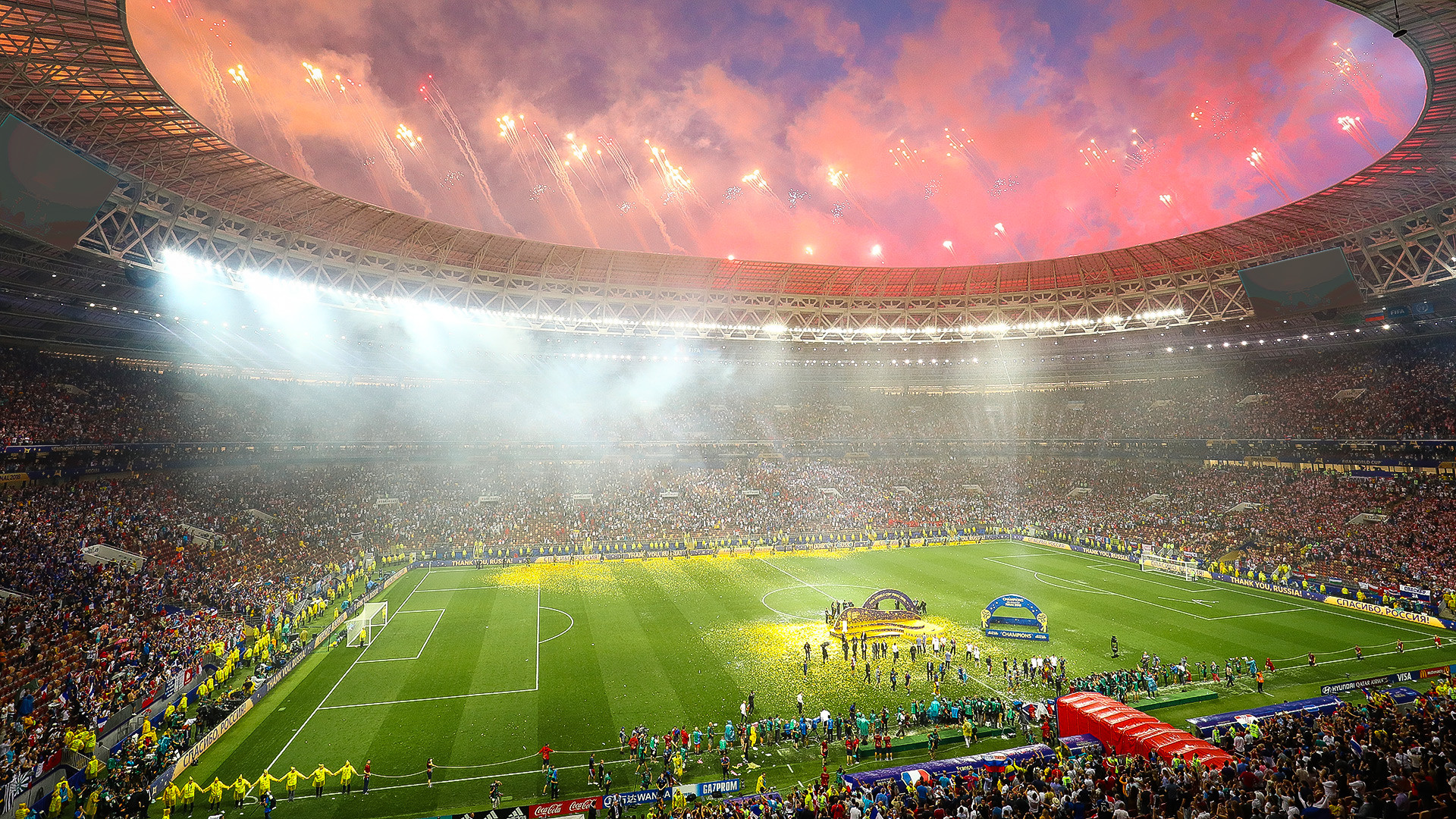 Kenzaburo Matsuoka/Global Look Press
It may be over, but we’re not quite ready to let go of our World Cup fever just yet. We look back on the moments that made us want to laugh, scream and take up football.

Is your wedding band looking a little pricey? Just wait until the next World Cup, and tie the knot in the presence of Argentinian fans – they’ll happily provide the music for free!

24. Pretty much everything Putin did

Russian President Vladimir Putin was only at two games, but managed to steal the show at both. His smugness in the face of Saudi Prince Mohammed bin Salman set the Internet on fire:

Then at the trophy presentation ceremony following the final, while the French and Croatian presidents got drenched, Putin not only had impressive cover but even had someone to hold it for him:

Putin with an umbrella while everyone else gets soaked. Classic. #WorldCupFinalpic.twitter.com/kiMnKmEdOV

In England’s quarterfinal tie against Colombia, the script looked written: They conceded a late goal, miss some good chances in extra time – surely what follows is a penalty shoot-out exit?

1998 - Jordan Pickford was the first England goalkeeper to save a penalty in a penalty shoot-out at a major tournament since David Seaman at World Cup 1998 against Argentina. Crucial.#COLENG#ENG#WorldCup#ThreeLionspic.twitter.com/qdwp7zRezO

Not this time. England secured their first ever World Cup win on penalties thanks to some unlikely heroes – namely keeper Jordan Pickford, who made a fine save, and substitute Eric Dier, who slotted home the winning spot-kick. The tension was real.

22. Brazil fans bringing the noise outside their team’s hotel

Brazil’s fans were among the loudest and best represented in Russia this summer. Before their quarterfinal tie with Belgium, the fans who made it to Kazan spent the night giving their boys some extra encouragement outside the team hotel. Check this out for atmosphere:

Before Iceland’s opening game with Argentina, 30,000 fans (almost 10 percent of the country’s population) gathered outside Moscow’s Spartak Stadium for a spine-tingling rendition of their trademark Viking salute. No wonder their players came away from the game with a point.

Some teams warm up for matches with intense stretching regimes and games of one-touch. Others, well, they just dance. And the “Happiest Players Award” goes to…

This is team Senegal dancing! I don’t think they really care about winning or losing if they can do this! pic.twitter.com/XYRprVrZXZ

It clearly rubbed off on fans, too:

The Senegal fans in the Otkrytie Arena have been singing and dancing all game!
👏👏👏#POL#SEN#POLSENpic.twitter.com/5AL4ZpaLN2

19. Ronaldinho stealing Will Smith’s thunder at the closing ceremony

The fast-paced opera rendition of Russian folk song ‘kalinka’ at the closing ceremony was quite a spectacle, and it was made complete by the unexpected buck-toothed joy and bongo expertise of footballing legend Ronaldinho.

Just look at that face, and tell us you didn’t feel a little happier on the strength of it.

Imagine this: You’re in the World Cup Round of 16, and your team has made it to extra time against the star-studded Spainish national team. What would you be thinking? Probably not food, I’m guessing.

For these three spectacularly dressed fans, however, quenching their peckishness was top priority. They became Russia’s meme of the tournament for their efforts:

17. Japan (almost) stunning Belgium in the Round of 16

Much-fancied Group G winners Belgium squared up against Japan in what looked set to be the least mouth-watering tie of the second round. Oh, how wrong we were – it ended up being one hell of a game, with the Japanese setting themselves up for a historic upset after scoring two beautiful goals early in the second half.

It wasn’t to be, however; Belgium piled their biggest beanpoles forward and clawed it back to 3-2. What a comeback it was, and a heartbreak for the valiant Japanese.

England, who went into the World Cup far from favorites, made it to their first semi-final since 1990, sending fans at home into delirium. “It” didn’t come home in the end, but before England were knocked out by Croatia, Kieran Trippier’s semi-final goal sent half of London’s beer supply skyward in Hyde Park:

2018 was the year that perennial “dark horses” Croatia finally came of age. Key to the World Cup runners-up’s success was captain fantastic, Luka Modric, who took home the Golden Ball as the tournament’s best player and gave us plenty to remember, including this beauty against Argentina:

Holy god, what a game. Let’s be honest, we all needed a sit down after that mayhem.

The 19-year-old sensation probably broke all sound and light barriers in France’s match against Argentina. At least, the cameraman had a pretty hard time tracking him:

Mbappe is the real life roadrunner, he’s even too fast for cameras 😂😭😂 pic.twitter.com/3mQEqPj0VX

Many envisaged the Brazilian forward lifting the World Cup this summer, and while he made some strong appearances, his tournament will be best remembered for some very questionable diving antics. Some say he’s still rolling…

Neymar spent close to 14 minutes on the ground during Russia 2018. Now, a new challenge has hit the internet. Football fans dive and roll dramatically to troll the Brazilian. #NeymarChallengepic.twitter.com/HlWe5W6pqN

In spite of Neymar’s antics, Brazil was looking unbeatable before their quarterfinal tie against Belgium. The Red Devils then shocked them with a performance of kings - courtesy of a breathtaking save by Thibaut Courtois and a fine finish by Kevin de Bruyne to round off a magnificent team goal. Belgium’s “golden generation” progressed to the semi-finals and eventually finished third.

Russia over-performed throughout the entire tournament and got its reward in the form of an unforgettable second round scalp against Spain. The most iconic moment was keeper Igor Akinfeev’s penalty shoot-out save with his foot, forever immortalizing his boot in the pages of Russian history:

9. The finger of God

No, we’re not talking about Robbie Williams.

Unfortunately for Argentina, it was Maradona rather than Messi who caught the headlines from the stands after making some interesting gestures during the 2-1 victory over Nigeria:

8. Ronaldo (and Costa) setting the tone

Portugal’s exhilarating 3-3 draw with Spain was football at its finest: Long-range goals, silky passing, and an old-fashioned bully of a striker battling it out with perhaps the greatest player ever for the plaudits. Ronaldo’s stunning free-kick was the ending the game deserved, while the match itself got the tournament started in style. One for the ages.

If there were a “Class Act Award” for the fans, it’d surely go to the Senegalese and Japanese supporters, who took time to clean their stadium sections after games.

Senegal⁠ fans cleaning their section before leaving the stadium after their historic victory against Poland. This is class.

The best fans of this World Cup?🙌

Let’s hope this catches on among other fans!

France’s N’Golo Kante is often touted as the “nicest man in football.” This was confirmed when, after winning the World Cup as one of the tournament’s best players, Kante had to be given the trophy by teammate Steven N’Zonzi because he didn’t want to impose on his teammates’ photo ops.

Steven N'Zonzi tells the players to let N'Golo Kanté hold the World Cup⁠ ⁠⁠trophy because Kanté is too shy to ask and didn't want to impose on anyone.

Then, despite standing at only 5’6”, Kante certainly didn’t try to block his teammates’ snap with French President Emmanuel Macron:

Where is Kante? Oh there he is 😂 pic.twitter.com/N2vipntCmw

Celebration of the tournament, hands down. Watch in slow motion for maximum effect.

While the goalscorers are getting most of the plaudits, let’s take a moment to look back on some of the legendary goalkeeping we’ve seen this summer.

First, there was Pickford:

Save of the tournament from Courtois. #BRABEL#WorldCup#courtoispic.twitter.com/ixqqViN2zO

Lloris and Akinfeev were also among the picks of the top saves. Keepers, stand up.

3. The throw-in that never was

It’s stoppage time in the biggest game of your life. You’re 1-0, and you get a throw-in that could lead to a goal. What do you do? Unfortunately for Iran, Milad Mohammadi decided to do this:

Although the timing was questionable, we’re definitely glad he went for it (and then backed out). Someone needs to make a 10-hour version of this ASAP.

Russia, who went in to the World Cup as the tournament’s lowest-ranked team, ended up getting to the quarterfinal by way of a spectacular defeat of 2010 champions Spain on home turf. This unexpected victory led to one of the biggest parties the nation has ever seen:

1. The immortal French taking it home

Did it ever look in doubt?

France was clinical and effective from the tournament’s outset, and sealed off a perfect World Cup showing with a 4-2 victory over a strong Croatia side. It was the best World Cup final in a long time, and the players and fans partied like there was no tomorrow:

France fans took over the Champs-Elysees as they waited to congratulate the players for winning the World Cup. 😲 pic.twitter.com/sHGjOOahKc

VIDEO: Revolution and football: French fans take to Moscow's Red Square to celebrate Bastille Day as they count down to the #WorldCup final between Les Bleus and Croatia pic.twitter.com/m5F9xRQBd3