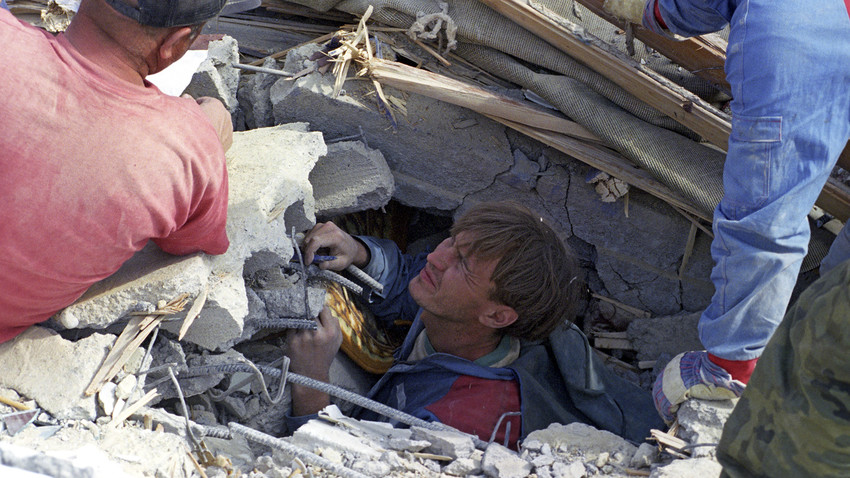 Search and rescue operations in Neftegorsk after the earthquake

Igor Mikhalev/Sputnik
The Emergency Situations Ministry, which was created in the early 1990s, faces some of the toughest challenges. Tackling them requires exceptional courage and ability, thanks to which many lives have been saved and even a Guinness World Record was made.

1. Disaster hanging by a thread

In September 1991, the city of Ufa (1,300 km to the east of Moscow) was one step away from a major industrial disaster when a refinery smokestack cracked. A gigantic concrete piece, which was 30-meters long and weighed 700 tons, was left hanging. At any moment it could break off and hit the part of the refinery where flammable fuels were produced. Any resulting explosion would cause a small earthquake in a city with nearly one million and would result in countless deaths.

A decision was taken to remove the hanging concrete piece with the help of a series of controlled explosions. It was very risky because the explosions had to be meticulously calculated in order for the dangling smokestack piece to fall in the right place. It was equally difficult to place 350 kilos of explosives at a height of 120 meters, and properly fasten them while strong winds were blowing. A group of rescue specialists came from Moscow to coordinate the operation.

“The Ufa smokestack operation was unique. Until then no one had ever attempted to cut a large part of a structure with a series of controlled explosions. Demolition experts made precise calculations, and alpinists carefully fastened explosives to the smokestack.

“The explosion brought the smokestack piece down on a special cushion made of sand and wood, exactly where it was supposed to fall, only insignificantly scratching the surface of nearby pipes,” said Vladimir Kavunenko, a rescue specialist responsible for safety during the operation

e remaining part of the smokestack survived the explosion, was repaired, and soon renewed operations. This daring feat was included in the Guinness Book of Records.

2. Buried by an earthquake

On May 28, 1995, an earthquake hit the small town of Neftegorsk (on the island of Sakhalin in Russia’s East) With a magnitude of 7.6, it still ranks as Russia’s most powerful earthquake in the past 100 years. Most of the 3,200 residents were asleep when it hit at 1 a.m., and 17 buildings designed to withstand a 6.0 earthquake rapidly collapsed, leaving the town in ruins and looking like a field covered with a thick layer of concrete debris. The quake also destroyed many roads and bridges, hampering rescue efforts 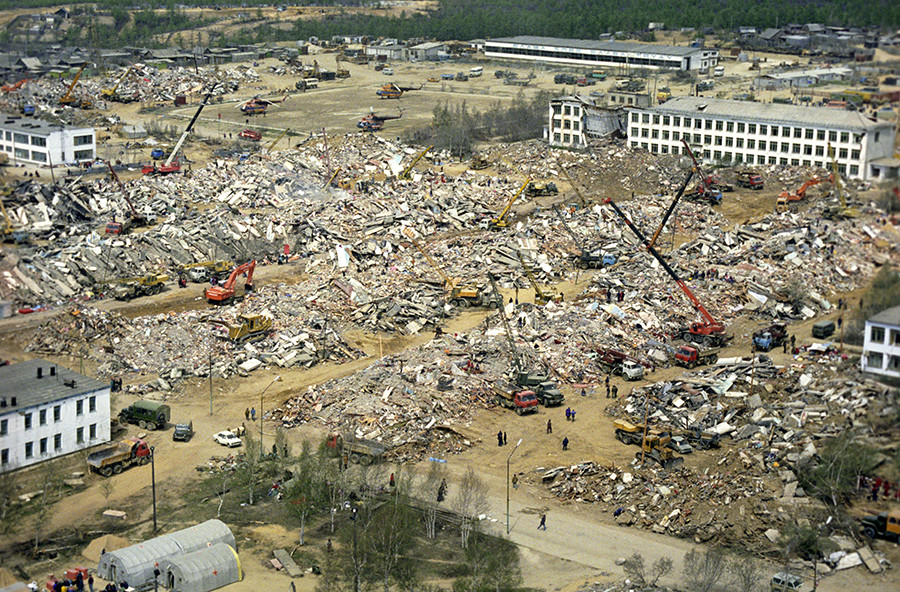 The town of Neftegorsk was completely destroyed in the result of the earthquake on May 27, 1995

than 1,500 emergency service workers were dispatched, and efforts were coordinated by the Emergency Situations Minister, Sergei Shoigu. He later recalled one incredible episode.

“A few days after the quake, rescuers found a man whose legs had been crushed by concrete blocks. He was conscious and hoped he’d be soon freed. Medics, however, realized that his legs were consumed by infection, and his body would not be able to handle the shock once the blocks were lifted. When the man heard this, he asked for vodka and cigarettes. He drank, smoked and then said: ‘Lift it up!’ The man died in the hands of rescue workers.”

This tragic event prompted the ministry to create unique mobile equipment for blood purification, according to Shoigu.

During the rescue operation, an hour of silence was applied for the first time ever. All search and debris clearing activity stopped, and rescuers carefully listened in attempt to find more survivors. Since then it has become standard practice across the globe.

Rescue workers put in 17-18 hours each day. They used search dogs and even found a survivor on the seventh day after the quake. Overall, despite the extremely difficult conditions, 406 people were rescued. But over 2,000 had perished in the tragedy.

Ostankino TV Tower, the highest structure in Russia, as well as in Europe, caught fire on Aug. 27, at the height of 460 meters. The fire suppression system was not working, and the fire spread quickly as burning TV feeders and cables fell, creating a sort of ‘rain of fire.’ 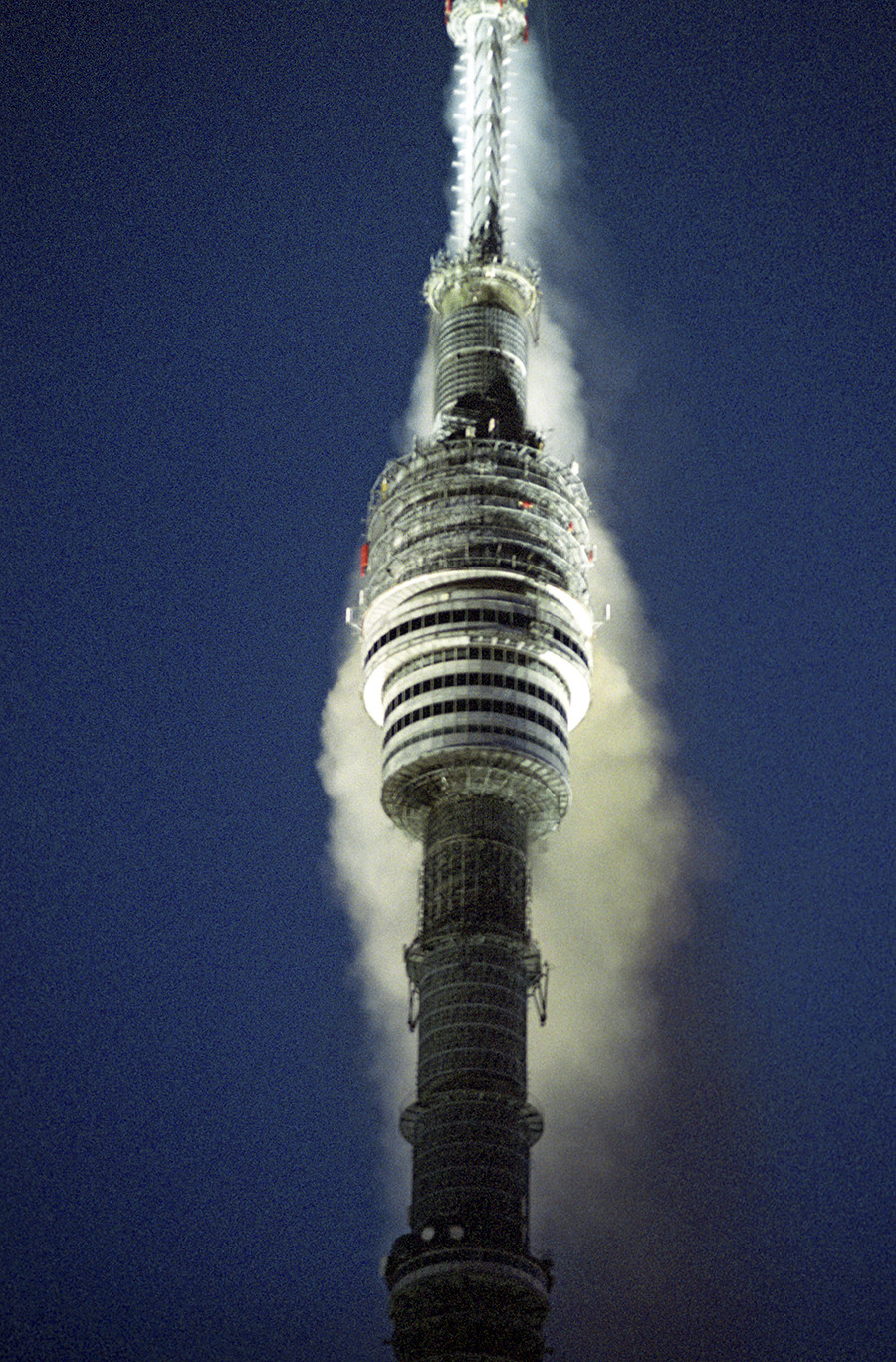 After the fire was extinguished, rebuilding the tower took several years

The first firefighters and rescue workers arrived within 10 minutes, and in 90 minutes everyone was evacuated from the tower although its narrow stairs could not be used. That’s why rescue workers had to use elevators to get people down. One of the elevators fell from a height of 300 meters, killing one firefighter and two tower staff workers.

Firefighters tried to stop the fire spreading down the tower, but falling debris seared through the material that was used to contain the blaze. Nearly 2,400 emergency workers fought to put out the fire over the course of 24 hours. Because of the high temperatures, 120 out of the 149 cables supporting the tower broke, and there was a real danger of the tower collapsing. At 80 meters, however, firefighters managed to stop the fire spreading. After the fire was extinguished, rebuilding the tower took several years.