How St. Petersburg’s young people are reinventing the Soviet kommunalka 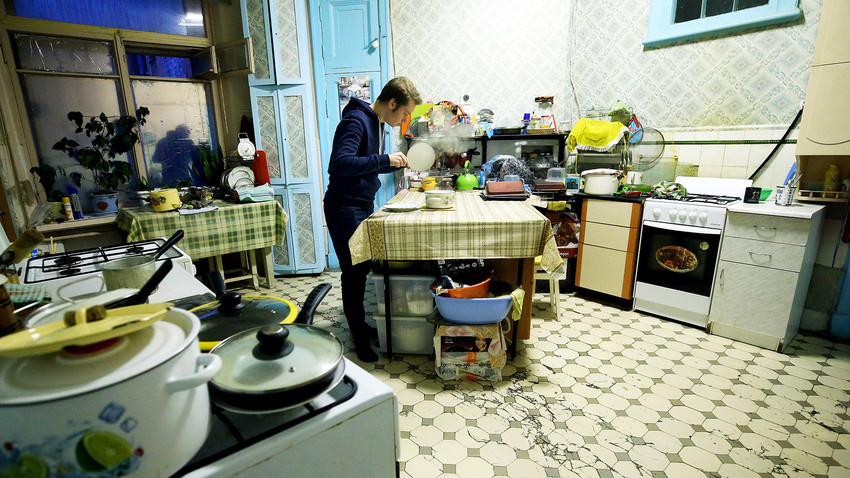 Petr Kovalev/TASS
How youth in Russia's 'northern capital' are trying new ways of communal living based less on domestic spats and bathroom schedules than on creativity and good vibes.

Just behind the Mariinsky Theatre is a neighborhood that is one of St. Petersburg's best kept secrets: Kolomna. 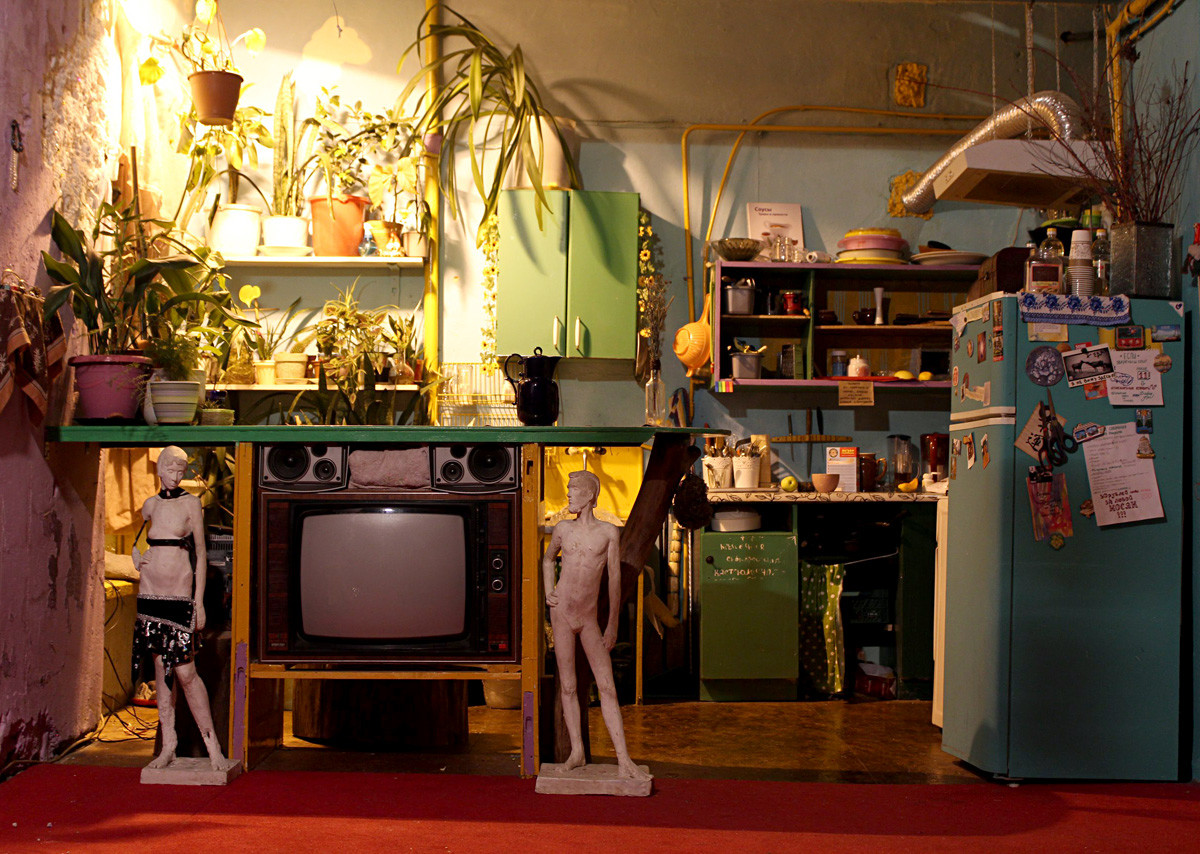 ‘Triglinki’ is one of a number of new spaces located in Kolomna. Head to the top flight of a dim stairwell (its walls covered with graffiti declaring love, peace and the benefits of vegetables) and you’ll see a bright yellow door greeting visitors with contact information and a list of rules for those who come to live or merely to socialize: art, tofu, highbrow cinema monthly techno parties are welcome. Alcohol, drugs meat: not so much.

If that seems off-putting, open the door and step inside. A broad cluster of sandals and winter boots fill a shelf near the entrance. Scooters hang from the wall and origami cranes dangle tastefully from strings. Soft electro-pop comes from large kitchen speakers, a piano stands against the wall and Christmas lights blink from a low shrub. At any given moment, members may be found cleaning, planning events, arguing over tea, doing yoga or plotting the next bout of redecorating and renovation 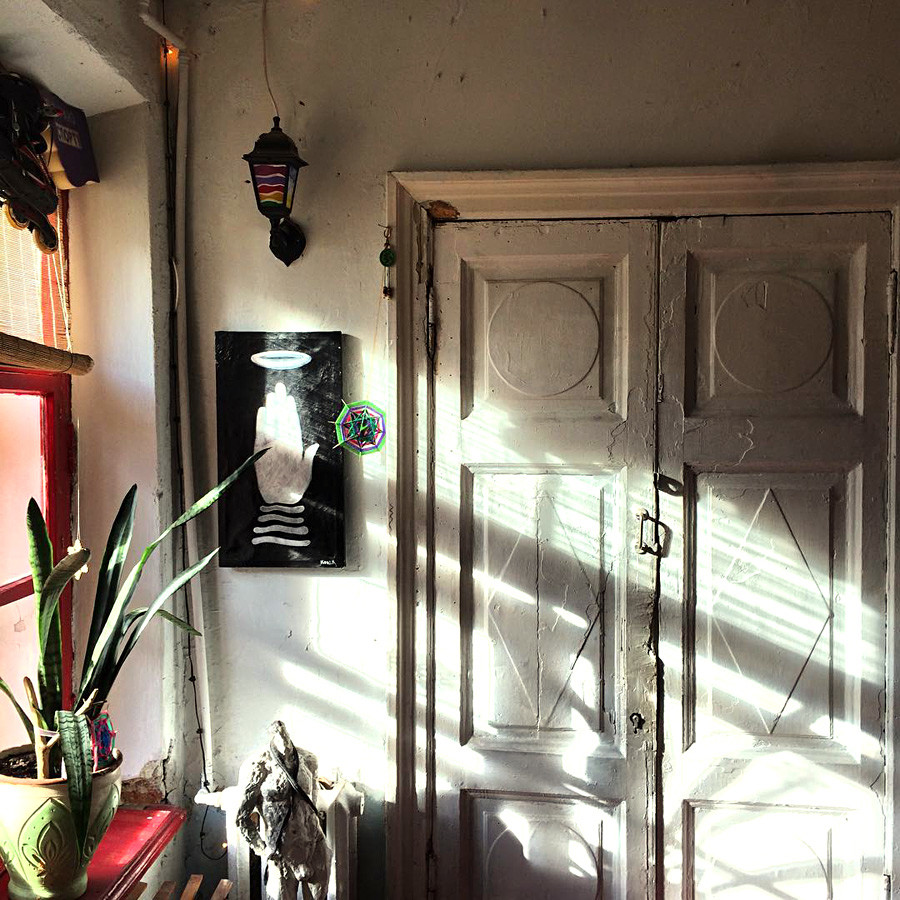 recent years, Kolomna has become a center for young people looking to explore new visions of community. The location is relatively central, rent’s cheap and there are plenty of interesting spaces to work with. Case in point: occupies a former kommunalka, itself a curious hangover from the recent Soviet past. These communal flats from the 20th century are being transformed into a very different concept in the 21st.

A brief history of the kommunalka

Kommunalkas are like regular apartments with one distinguishing feature: individual rooms are often large enough to house whole families. People in the Russian capitals started co-renting apartments back in the Tsarist period, but after the Bolshevik Revolution the term kommunalka became a Soviet phenomenon. Lenin saw in them a truly Communist potential – people from different classes and backgrounds living side by side – and went on to encourage co-living to rapidly urbanize a population that was still overwhelmingly rural. 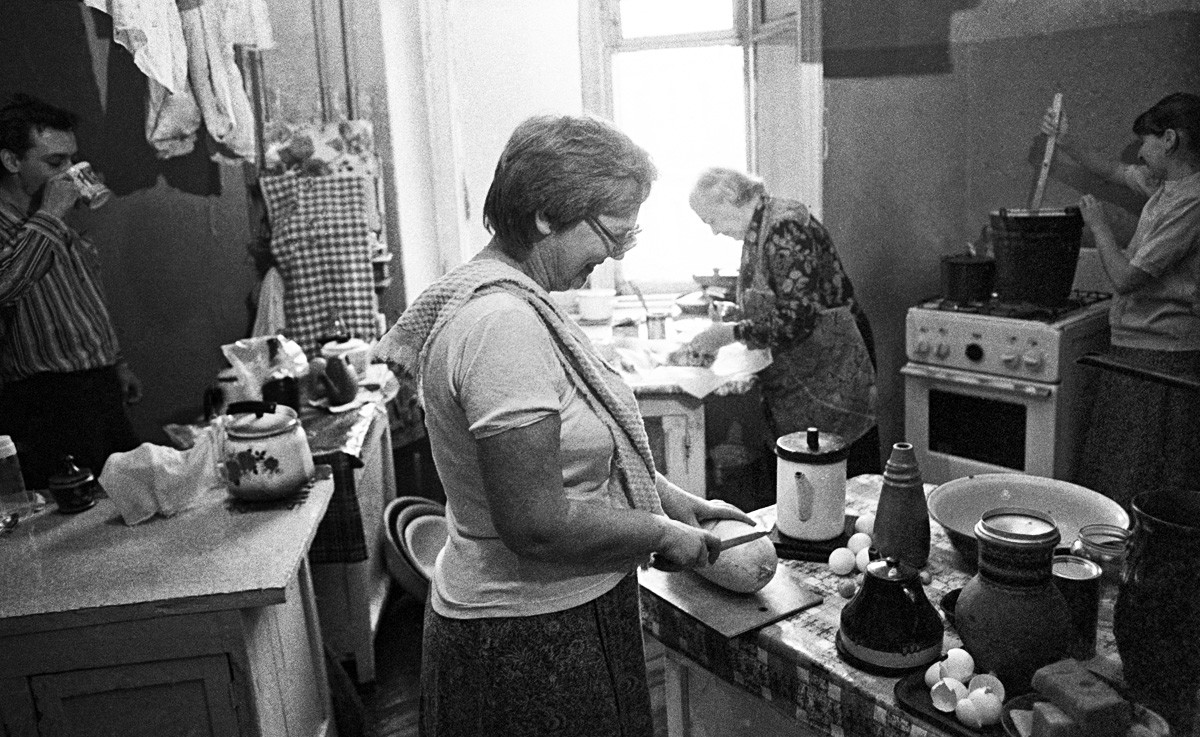 Kitchen in a communal flat in Moscow

would often arrange , a process that deliberately placed proletarian families into the apartments of the rich and noble – leaving the hosts (and former owners) only a room or two for themselves. Large numbers of families were thus relocated to the country’s major urban centers, where a lack of space forced them to live in close proximity to their neighbors. Shared bathrooms and kitchen space led to new clichés: weekly cleaning schedules, eavesdropping passive-aggressive kitchen spats.

When Khrushchev came to power after Stalin’s death, housing reforms allowed some families to move into very small, albeit private, apartments, although large chunk of the population continued to live in kommunalkas. Which makes more than a few locals wonder why young people are consciously choosing to occupy them today.

“Anyone can move into another kommunalka,” says Ruslan Larochkin, Triglinki’s founder. “But not everyone can make what we’re trying to make here. We don’t want to just be roommates – we want to make a small family. 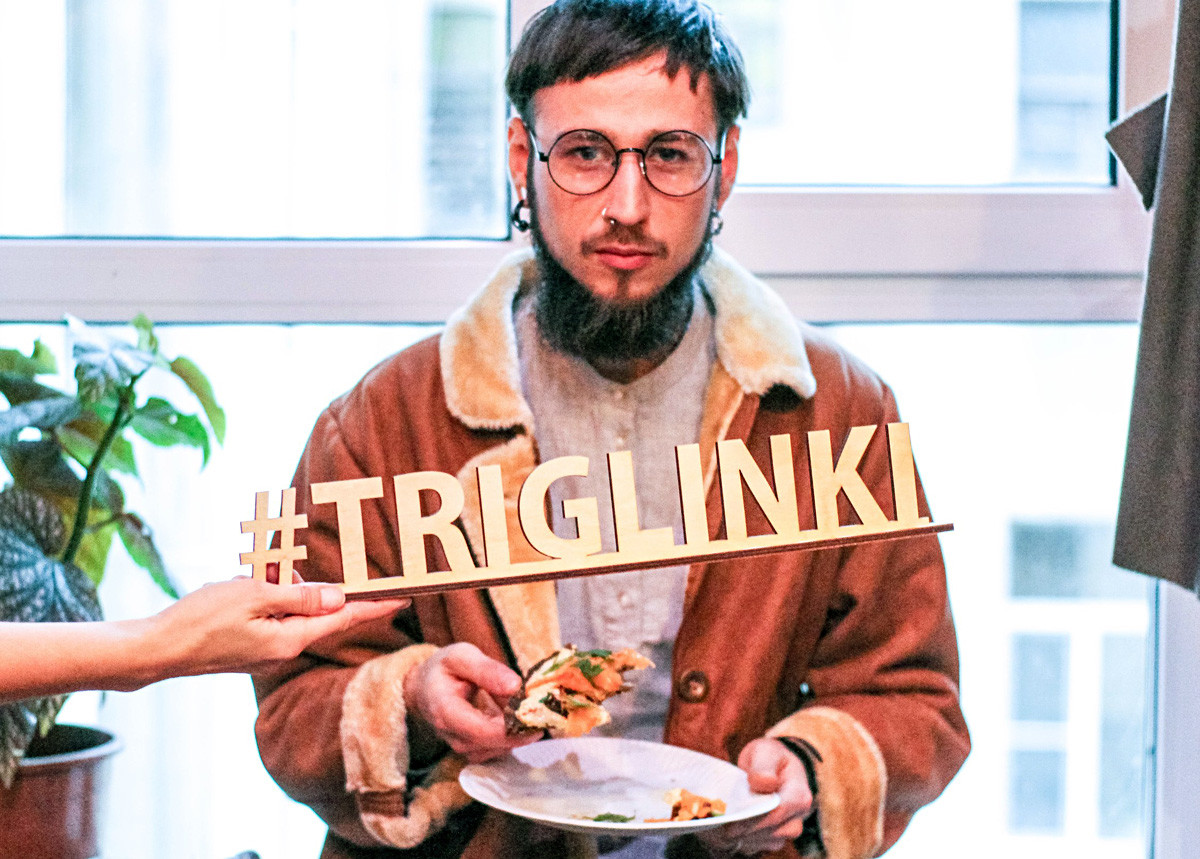 is its people,” Larochkin continues “And people always come with some kind of energy – when someone moves into this room, I’d like them to bring good vibes.”

This DIY aesthetic is present everywhere in the apartment, from bathroom collages to flags in the kitchen to the regular events that take place in shared spaces like the living room. Concerts, restaurant days and movie nights are a regular thing. Foodsharing, recycling and a good cup of tea are part of what glues the apartment’s roommates together.

Just a few blocks another co-living space, Kubometr, shares some of the same tastes. Founded in 2013 by Olga Polyakova and some friends, it quickly turned into a hub for young people interested in cultural and social projects.

Polyakova’s own platform, Trava, serves as one of the city’s more vibrant grassroots event collectives – facilitating anything from masterclasses to themed excursions to anti-discrimination spaces – and a number of other ‘veterans’ have gone on to launch projects of their own 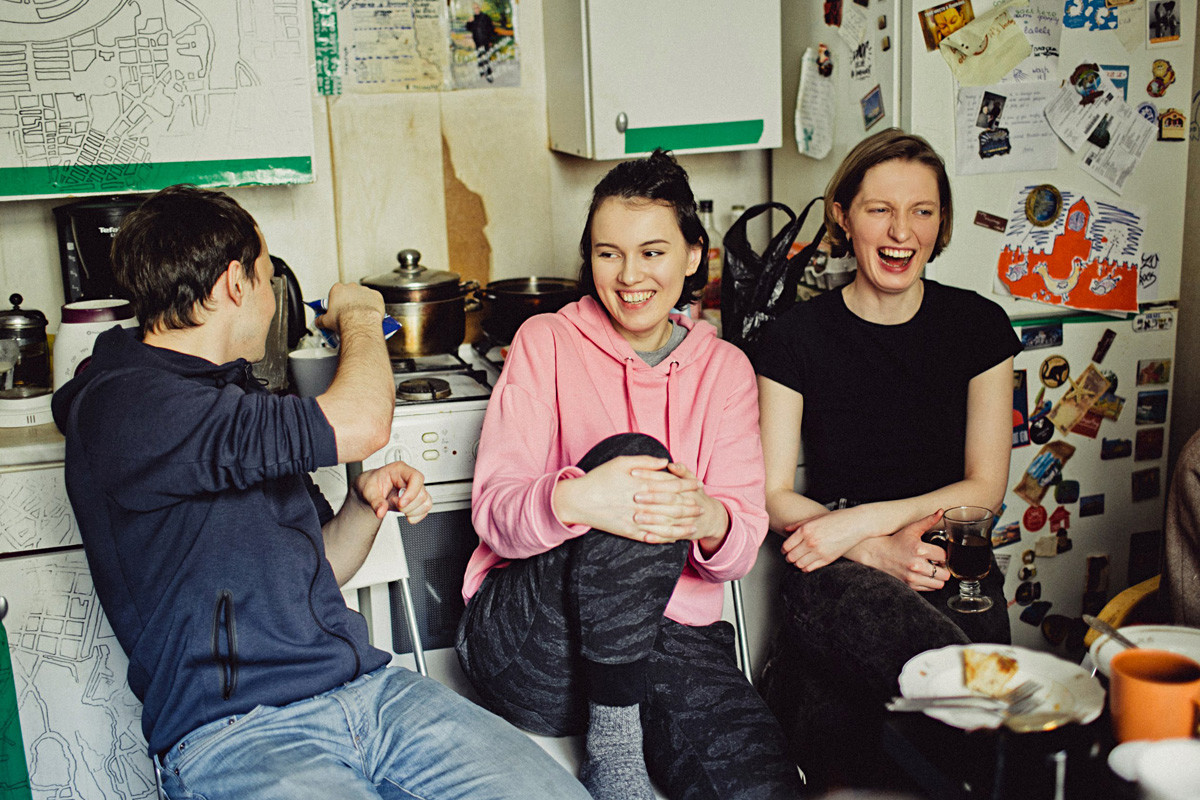 members Asya Senicheva and Ksusha Morozova curate monthly house conferences, events where anyone can register to give a talk on any subject. Attendees are encouraged to bring wine, fruit questions – the point isn’t just listening to interesting people, but hanging out with them too.

While for some these spaces may come across as neo-bohemian paradises, the day-to-day realities of common life are unavoidable. Misunderstandings and the pressures of living in close proximity to others are part of the package. Life in these kommunalkas isn’t for everyone: in there are rules to follow, and sometimes finding the right roommate can take a while.

Sometimes there are events that combine the old and new. Recently Kubometr marked its fifth birthday and celebrated by inviting Natalia Patkul, a woman who lived in the same apartment decades ago, to speak about her experience. 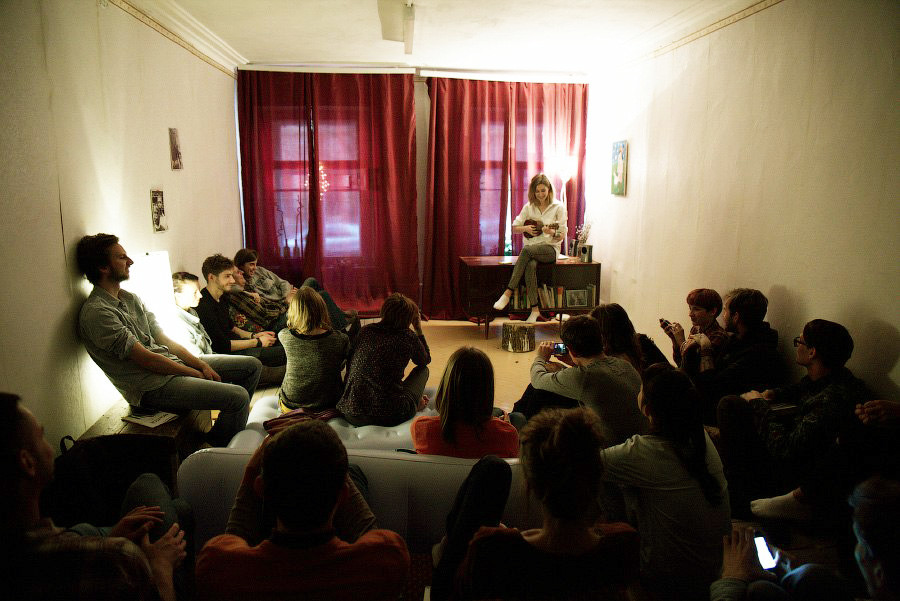 When asked if she thinks kommunalkas will eventually disappear, she demures. “Changes are inevitable, and every period has their own trends. Even if kommunalkas vanish, we’ll eventually feel a kind of romantic nostalgia for them.”