Is Russia a religious or secular state? 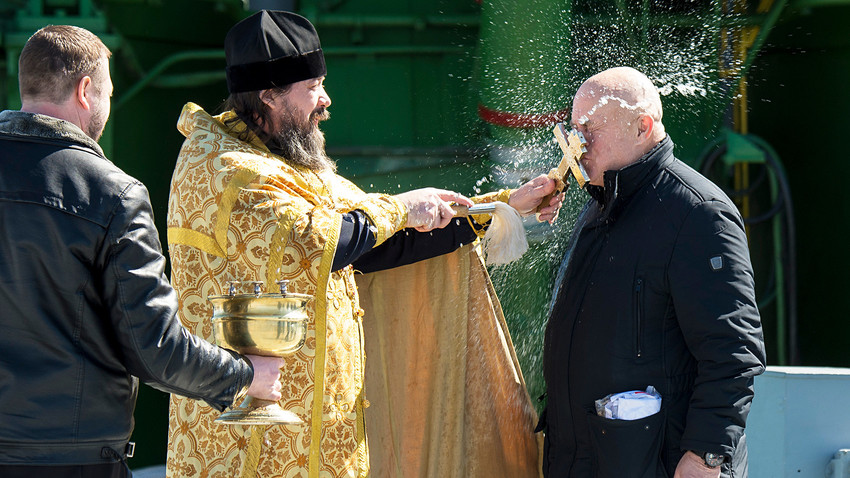 AFP
Russia is a secular country, according to the Constitution. Why then do Russian schools have religion in the curriculum? Why do we hold Christian rituals before sending a rocket off to space? And why are some Russians still afraid to go out wearing shorts?

The sun shines down on the cosmodrome located in the Kazakh steppe, forcing everyone to squint. The engineers and mechanics stand in ceremonial silence as their former colleague – now known as Father Sergei – says a prayer next to a rocket. “We ask the Lord God to bless this rocket’s flight,” he says, sprinkling holy water generously over the area, including the camera crew, now rushing to protect their equipment.

The ritual is being performed at Baikonur for the 353rd time. Russia’s space agency Roskosmos has been blessing its rockets since 1998. If anything misfortune were to befall the launch vehicle there would probably be a slew of statements online along the lines of “Should’ve sprinkled it better, maybe it wouldn’t have fallen.”

Each time Russians argue over whether we’re a religious or secular state, the country remembers some of the more outlandish rituals, such as the blessing of entire military bases and sometimes even cars transporting prison inmates.

Sure, Russia is a secular state – it says so in the Constitution. But what good does this do us? 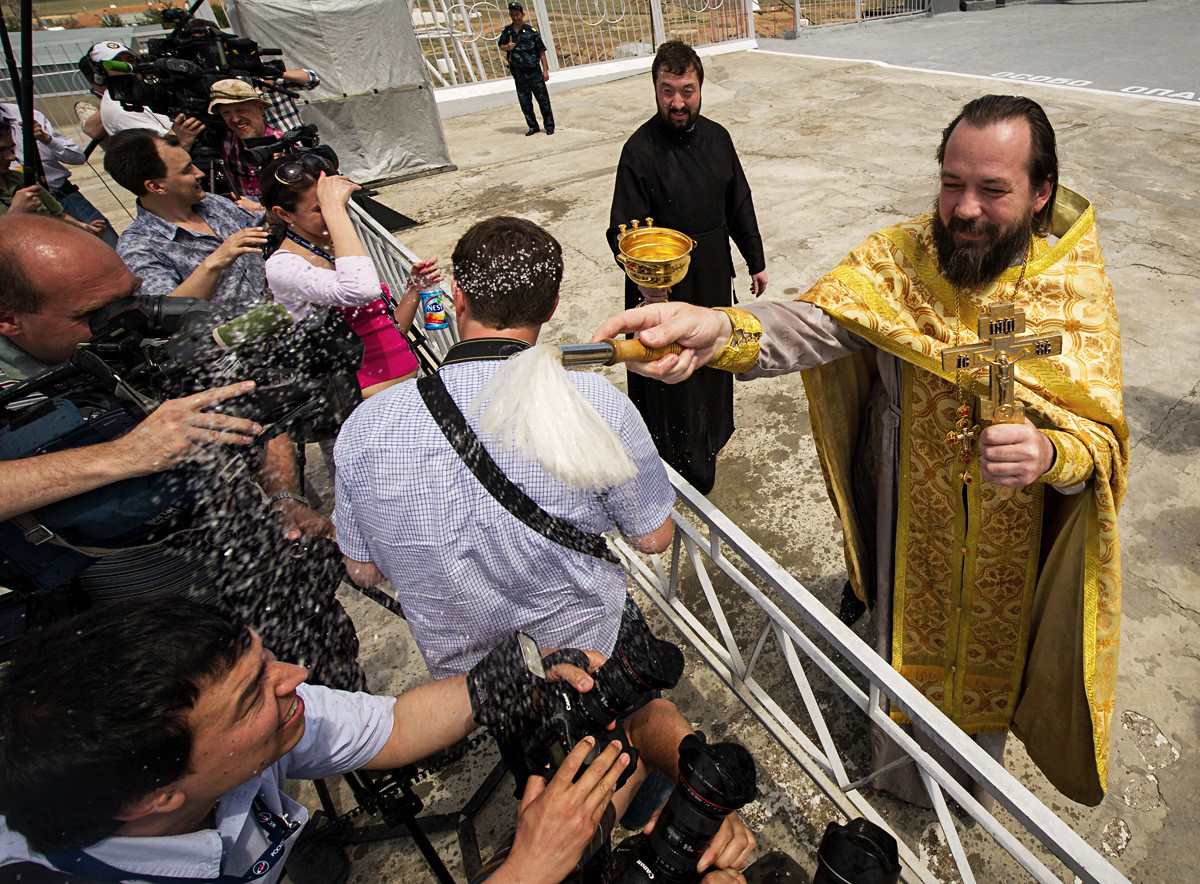 Russians are an overwhelmingly Orthodox Christian people. Official figures put the number at 80 percent of the population. The remainder consists of Muslims, Jews, and Buddhists, yet, if you were to ask the Christians how many of them actually observe Lent, you’d end up with just one percent. Services, for example, are visited by a mere four percent – that’s 5.8 million in a country of 146 million. What’s even more weird is that only about 75 percent of those who call themselves Orthodox Christians actually believe in God.

The Russian Church isn’t too bothered, however. “We are merely at the beginning of the spiritual renaissance of our people,” said Patriarch Kirill. And the Church’s influence has been rising steadily over the past 20 years. Its trust and approval rating sits squarely in second place, between the armed forces and law enforcement. 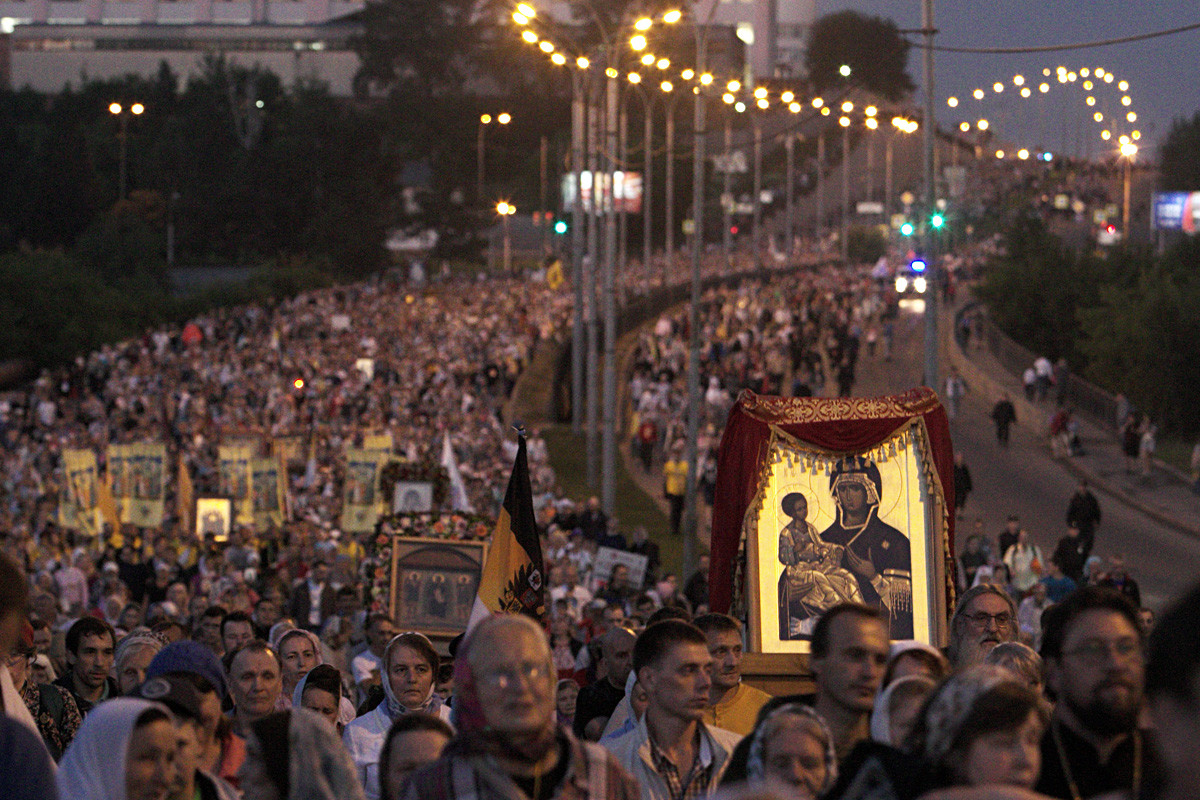 Russian Orthodox believers take part in a nightime procession marking 100 years since the Bolsheviks shot dead tsar Nicholas II and his family after he abdicated outside Yekaterinburg early on July 17, 2018

The vast majority of Christian-majority regions in Russia are inhabited by people who adorn their workplaces with icons and crosses (sometimes making them look like a mini-iconostasis), but is this genuine proof of their devotion to piety? Not according to sociologists.

“These days, the statement ‘I am Orthodox’ barely denotes a belief in God,” says Levada Center expert, Natalia Zorkaya. “The number of these ‘Orthodox’ people matches closely that of the ethnic Russian population. For many people, the word is merely a synonym for the word ‘Russian’.” As for the blessing of rockets before takeoff, that is something akin to the crosses you see hanging in taxis.

What deserves greater focus is whether religious bodies in Russia impact societal norms of behavior on a meaningful level, says the director of the Sova think tank, Aleksandr Verkhovsky, whose organization monitors the spread of racism and xenophobia, as well as the effects of religious dogmatism on society. Things get more complex here.

Where does the religious Russian live?

When the village of Belozerye in the Republic of Mordovia was slapped with a hijab ban for students and teachers in 2017, scandal swept across the entire country. The village, inhabited by ethnic Tatars, had just been dubbed the “Tatar Caliphate”: according to Rosfinmonitoring, some 18 people from that village alone are listed as active members of ISIS [an organization banned in Russia]. A hefty number for a village of 3,000 people. According to rumors, the number could be even greater. 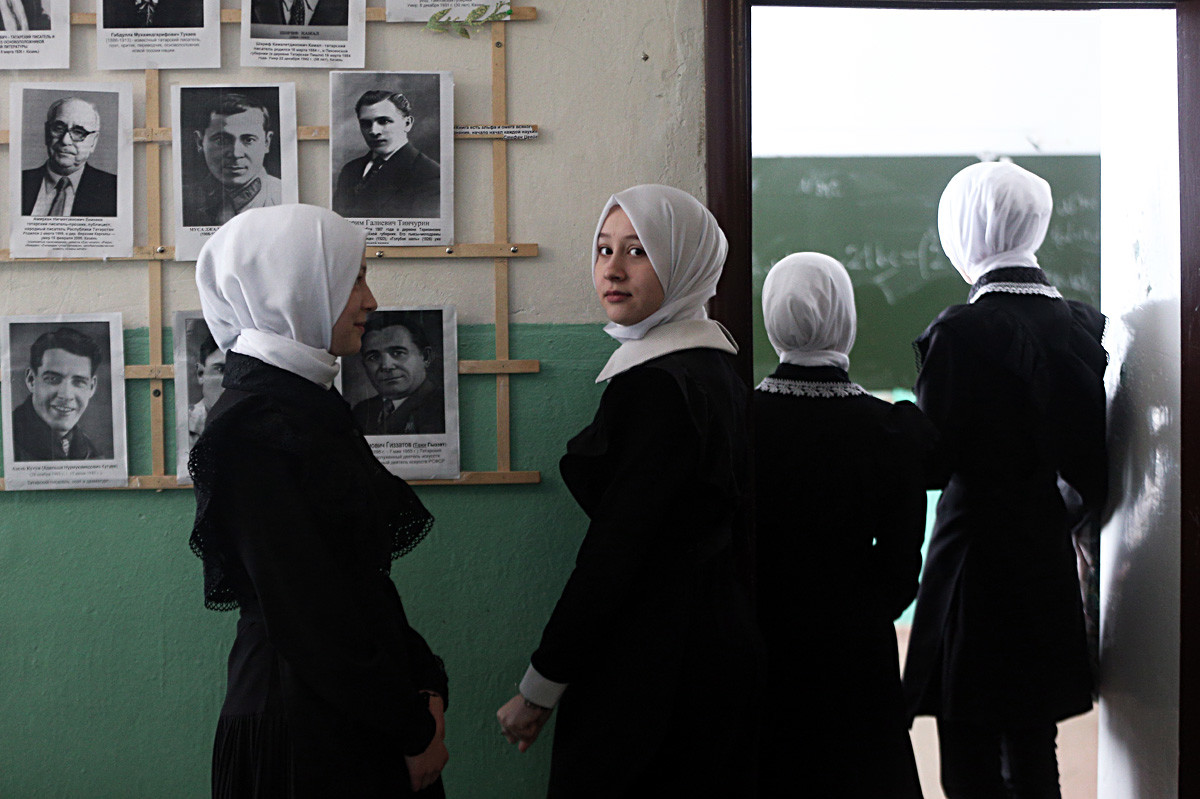 Everyone descended onto Belozerye – including the FSB, as well as various educational bodies, along with the minister of education himself – who said at the time that the wearing of hijabs in schools is out of the question. This was immediately followed by a sharp response from another Muslim-majority region of Russia – the Republic of Chechnya.

The result was an uneven victory for the headscarf: some places banned it, while others continue to ignore the law. The Supreme Court has roundly rejected the wearing of hijabs in select regions, but the Constitutional Court (which oversees decisions at a national level) hasn’t touched the issue.

These are by far not the only regions in Russia where one can encounter religious pluralism. There’s also the North Caucasus.

“Dagestan is a deeply religious region by any formal measure, but you also can’t procure alcohol there,” says Verkhovsky. “Not because it’s forbidden by law, but because religious activists – often with the use of coercive force – are preventing its sale.”

One very popular Dagestan-related online search query is whether shorts are allowed there. “One of the most persistent memories I have of Mackhachkala is of my brother who wouldn’t allow me and my girlfriend to go out until I’d tucked my longish hair down my collar and she’d swapped her knee-length shorts for jeans,” says Nightuser in his online blog.

From courts to schools

The law “on offending religious sensibilities” has existed in Russia since 2013, when members of Pussy Riot, an art/punk collective, staged a public spectacle at the Church of Christ the Savior in Moscow. Each year there are one or two cases that relate to this law, and to this day, not one has ended in a criminal sentence. For instance, in 2016, Dagestani athlete Sayeed Osmanov struck a statue of the Buddha, urinated on it, then uploaded the video to the Internet, receiving only two years probation. 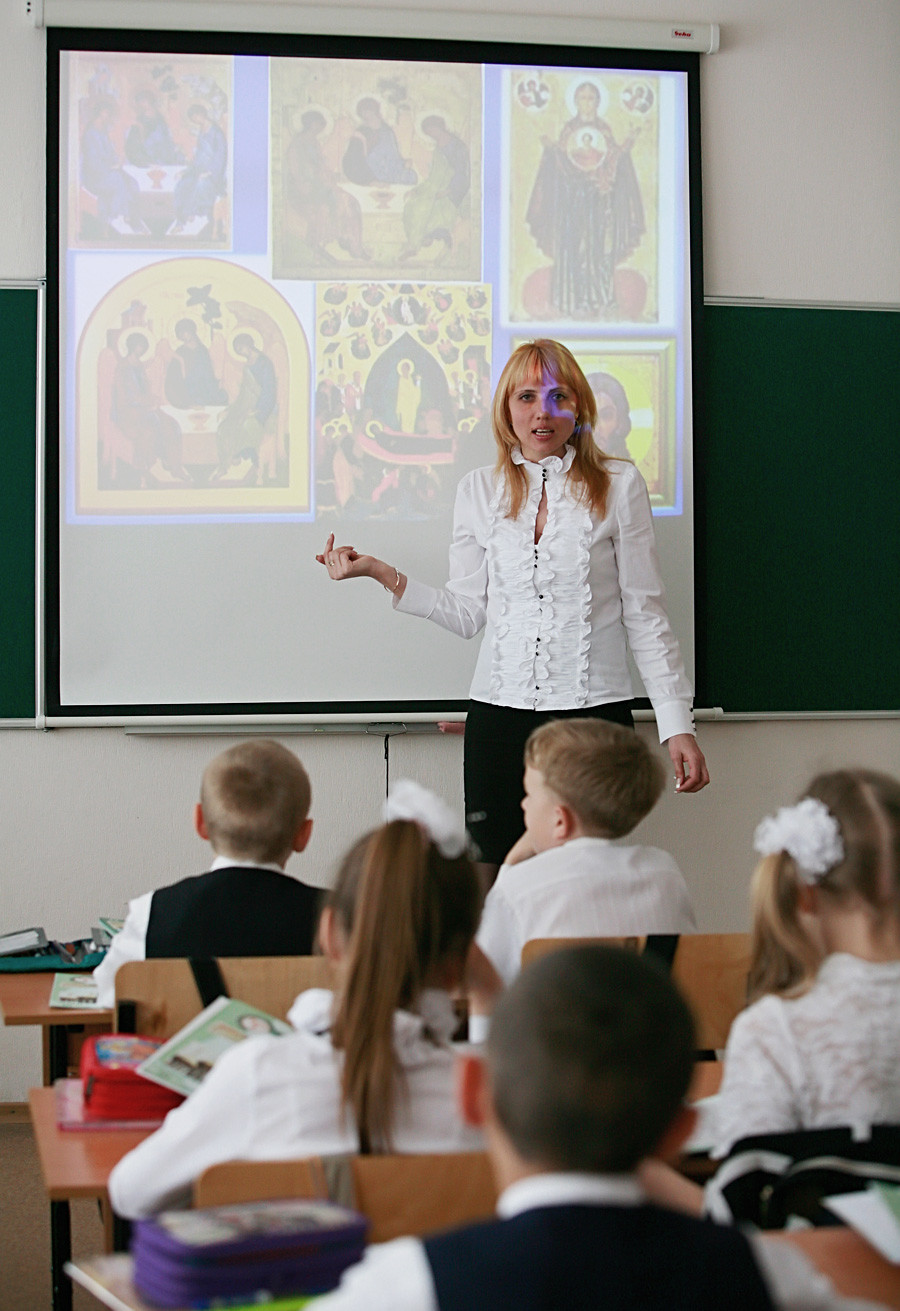 Pupils of school No.19 in the Stavropol Region where an experiment on implementing the Basics of Religious Cultures and Social Ethics course was launched.

Those who oppose a non-secular Russia often have one question: “where are the laws pertaining to the defense of non-religious sensibilities?” When, following multiple squabbles in government circles and media, a new class was introduced to the school curriculum, entitled “he basics of religious culture and ethics,”  many saw it as a direct attempt by the Church to spread religious propaganda. The Church, for its part, says the class is merely a way to familiarize students with religion and the variety of its traditions.

Wherever these attempts by the Church to influence school policy lead, Verkhovsky believes them to be rather cosmetic in nature. “In reality, different school teachers may give a different class – some focus on the Orthodox Christian faith, others focus on world religions. And the Church doesn’t regulate them in any way. That would be up to the State.”

Moreover, the Church’s hand can barely be felt in the regions of central Russia, Verkhovsky adds. “There are notable excesses. But they remain just that: excesses.”

President Vladimir Putin has remained single minded on the issue: “Russia is a secular state. It was founded as one, and shall remain one.” The President spoke at the annual televised Direct Line, where he addresses the nation’s questions and concerns.

Religion in Russia lifestyle Why Russia