How did Tolstoy’s garden home end up in Connecticut?

Lifestyle
John Varoli
Getty Images
Moscow has no shortage of sites connected to the life and creativity of the great 19th-century Russian writer, Leo Tolstoy. But what is something related to his life doing in the State of Connecticut, north of New York City? We went to investigate.

To reach Sherman, Connecticut one has to drive for about an hour due north of Manhattan. Even before you get close, the highway ends and you find yourself on a serpentine country road, driving through thick forest with a generous scattering of lakes that were carved by the glaciers.

When you finally reach Sherman’s downtown, which is no more than half a dozen quaint historical American houses, be careful not to blink, otherwise you’ll drive right through and miss it.

This is a very different America than what you’ll find in the big city, and it’s precisely this seclusion and serenity that attracts the American intelligentsia to this picturesque idyll.

A little bit further outside of Sherman’s center one finally comes to the country home of Robin Raybould, a British-born real estate entrepreneur, an author of medieval history and mystery novels, and a man with a passion for Leo Tolstoy. 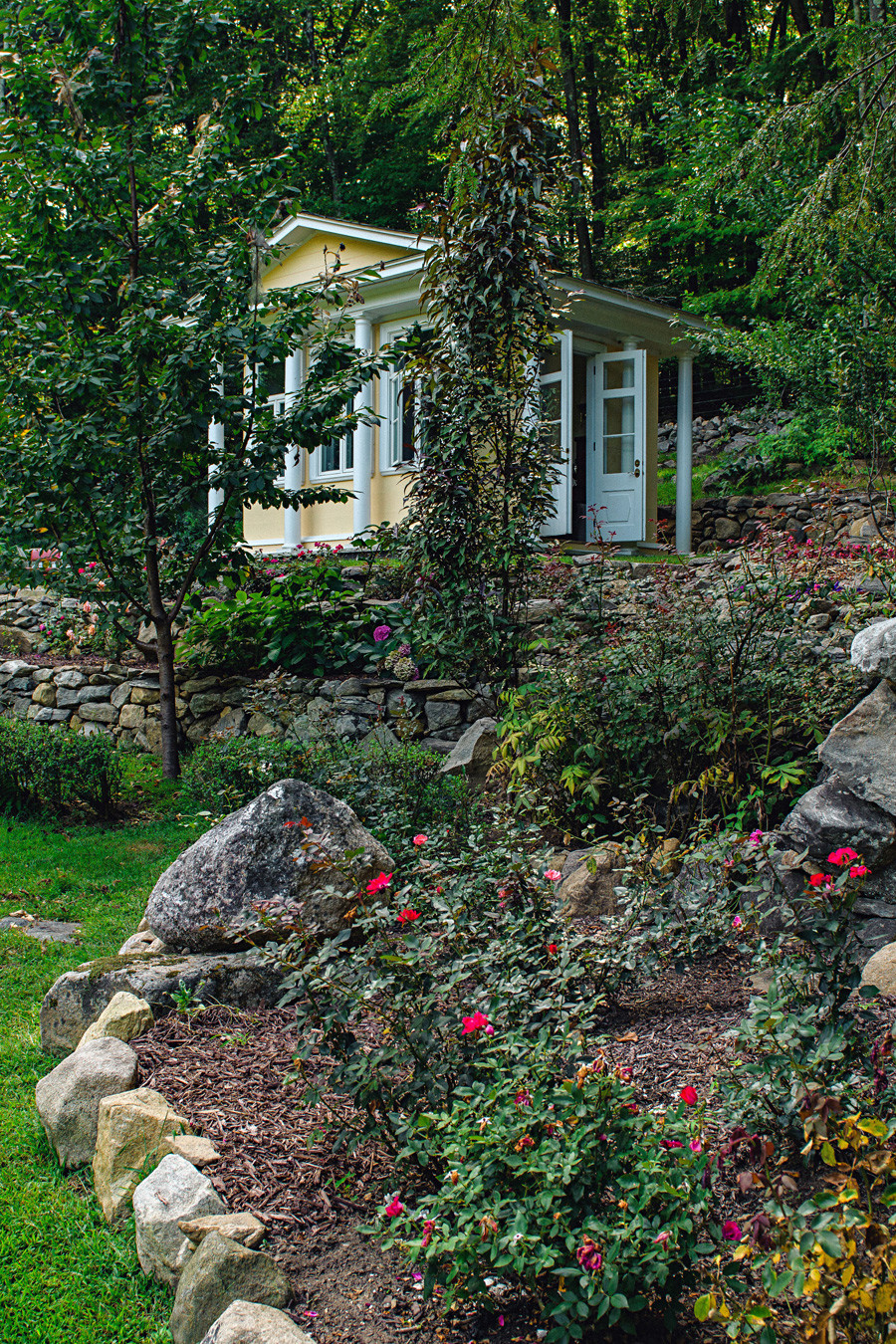 Together with his wife, Elena, a professor of Russian literature, they’ve erected a monument to Tolstoy’s memory. But this is no ordinary monument; it’s an exact replica of the great writer’s garden house in Moscow.

“We were in Moscow in 2013, and we saw Tolstoy’s garden study at the Tolstoy Museum in Khamovniki,” recalls Robin in an interview. “When we returned home we decided we wanted to do something to memorialize Tolstoy’s work and genius. Elena, as the one who is in charge of the garden, came up with the idea to build a replica of the garden study.” 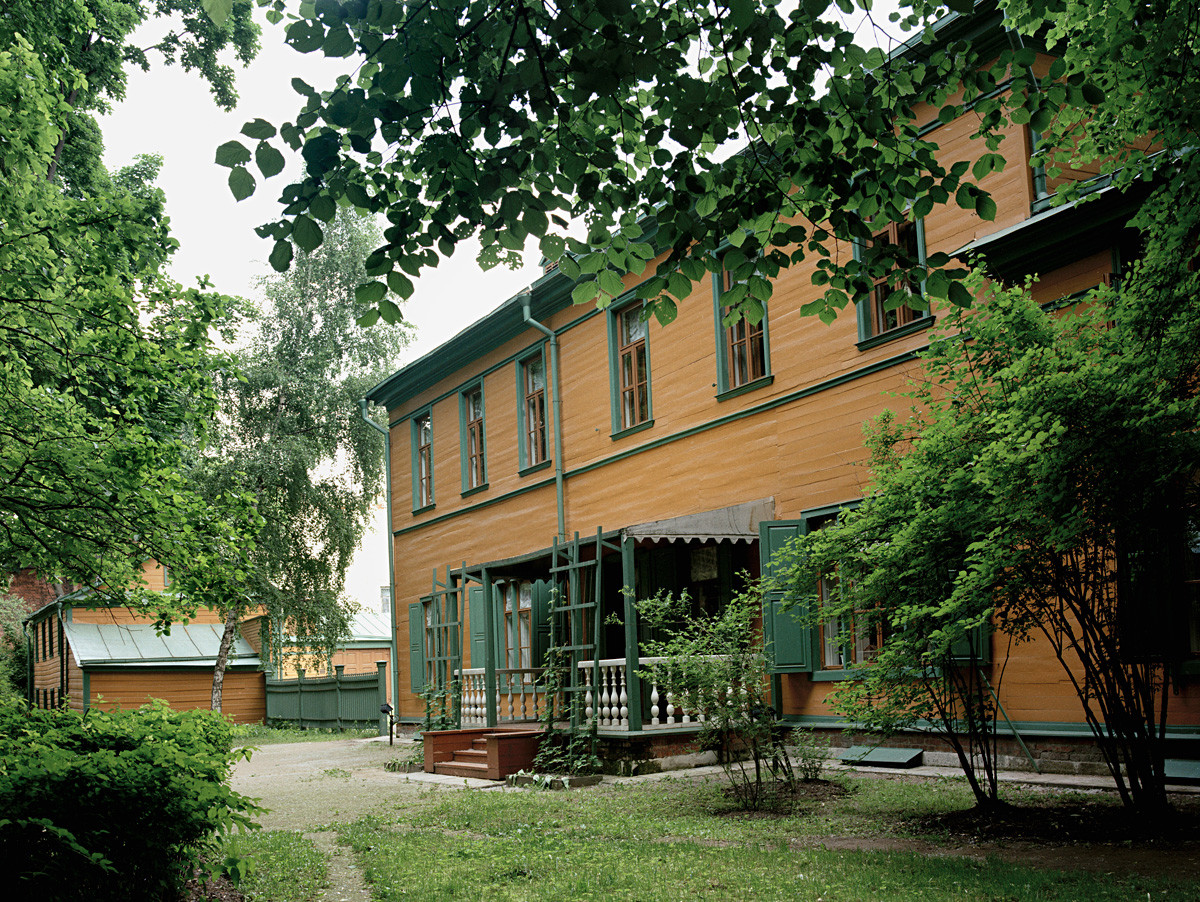 Everyone probably knows Tolstoy’s summer estate, Yasnaya Polyana, but much less known is his home in Khamovniki, an outer district of 19th century Moscow that was Tolstoy’s home for 19 years. In Khamovniki, Tolstoy wrote many works, including Resurrection, Kreutzer Sonata, and others.

“Tolstoy’s garden house in Moscow strikes one with its simplicity: there is nothing imperial or aristocratic about it,” said Elena. “It displays original items: his boots, his bicycle, the table cloth that his wife made. There’s nothing that would say a Count lived there. His desire to live like everyone is what strikes us.” 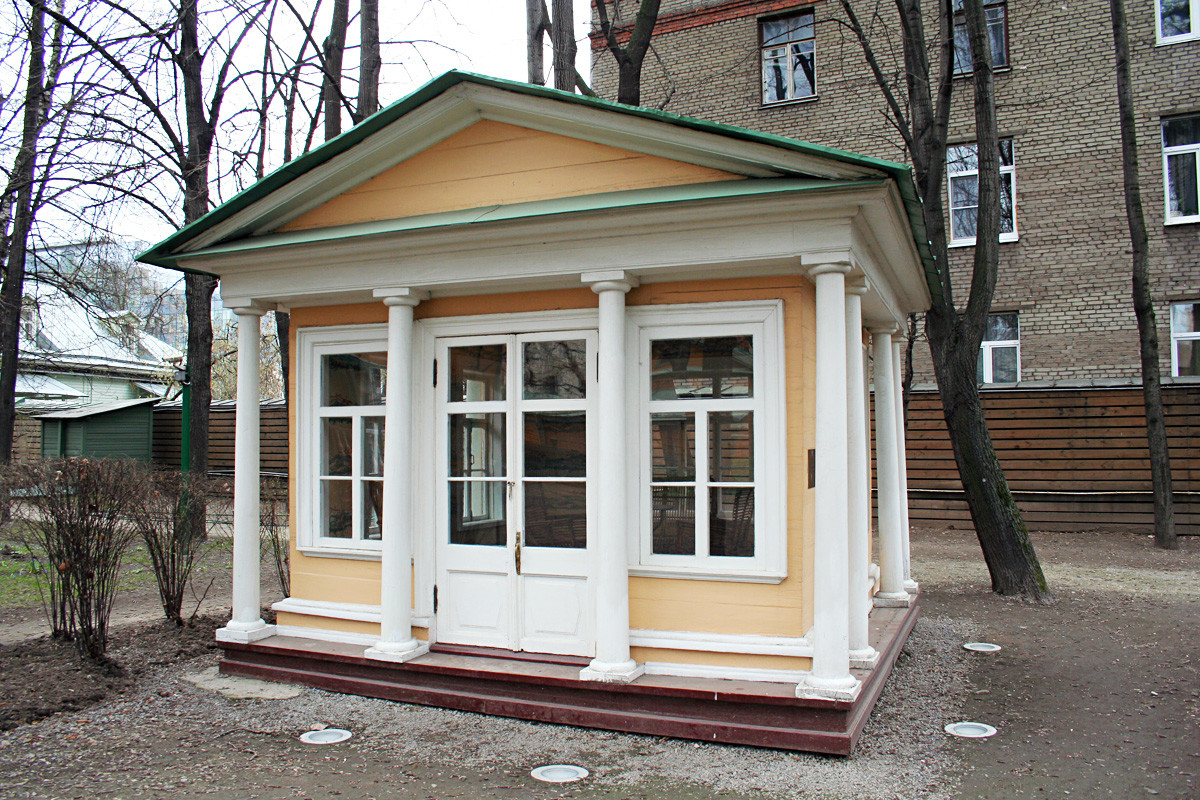 The Raybould’s Tolstoy house was built by local Connecticut craftsmen who meticulously and quickly erected the structure with nothing but a photograph. It’s an exact copy, with one exception: the door is on the side and not in front. This was done in order to not obstruct the view from the desk, said Robin.

In a bizarre coincidence, the size of the original Tolstoy garden study is the exact size that local zoning laws allow for building secondary structures on one’s property. Technically, according to local law, Robin and Elena’s Tolstoy house is classified as a ‘potting shed’ for the garden.

Paying homage to the great author

While celebrating Tolstoy’s genius was foremost in their minds, there was also another facet to their decision.

“Our property has an eclectic architecture: a blue house, a red barn, and so I told Robin as a joke that the only thing that we’re missing is a yellow house. And then shortly after we were in Moscow [in 2013] and I saw Tolstoy's garden house in Khamovniki, and I thought, ‘Perfect, this is what we need to complete the property,'” said Elena with a chuckle. 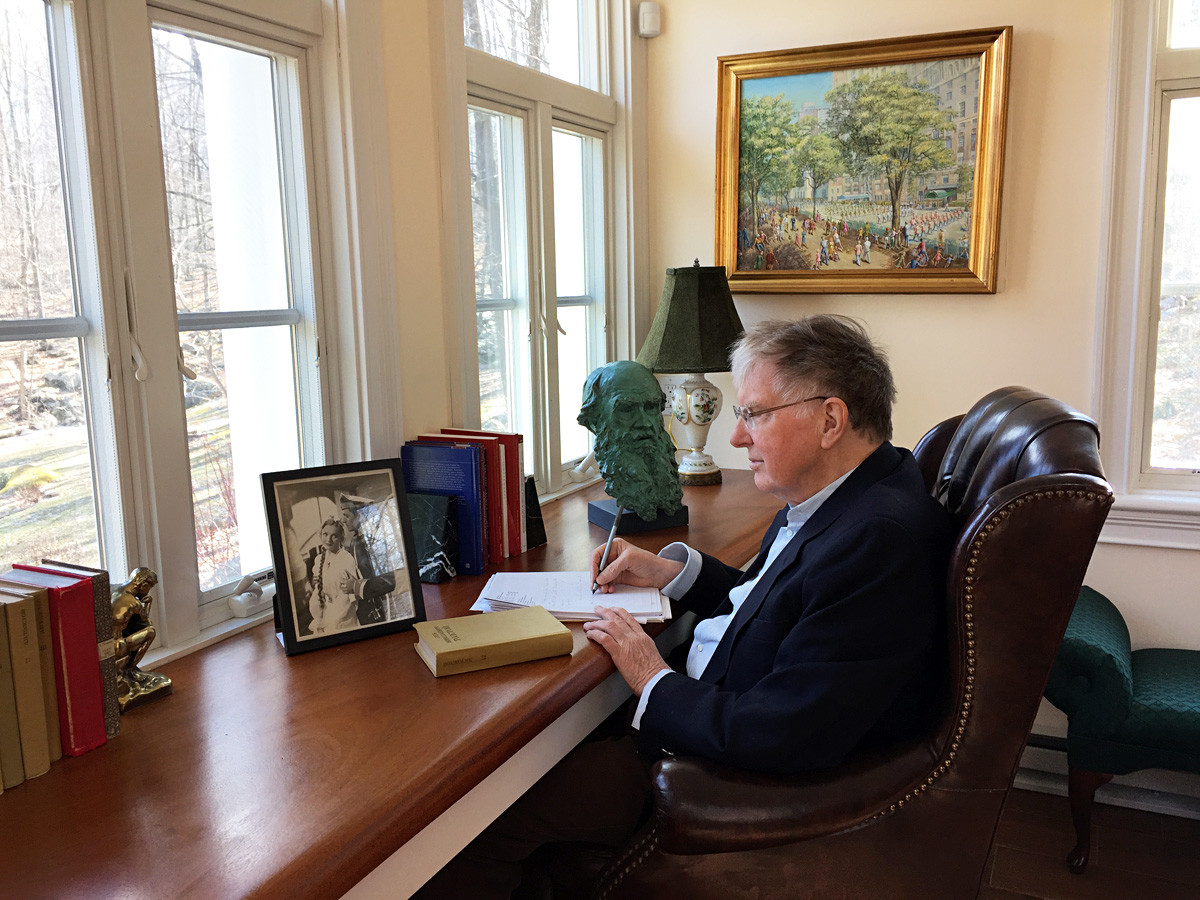 Today, the replica of Tolstoy's garden study is Robin’s place of solitude and thought, where he can write books, of which he has already penned six. He is watched by the bronze bust of Tolstoy that was specially commissioned from the acclaimed British sculptor, Felicity Patterson, who is Robin’s sister.

“Robin of course wanted to demonstrate is respect for the great author, but as someone who loves books, collects them and writes them, this is of course a place where he can concentrate, be alone and be inspired,” says Elena. 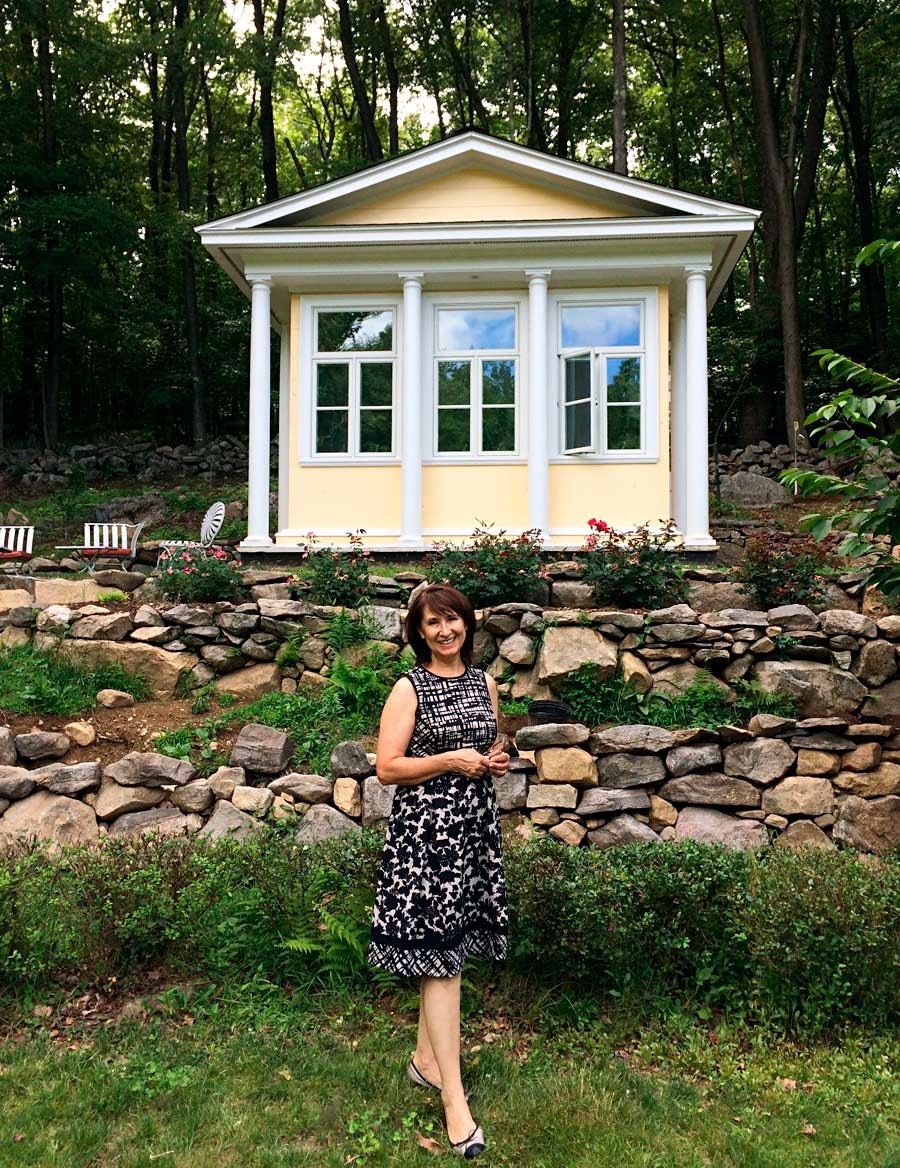 While the Tolstoy house in Sherman is not open to the public, once a year it’s the scene of a Russian cultural festival where dozens of guests gather. And so, in the classic Moscow intellectual spirit, Tolstoy’s serendipitous home in Connecticut continues the mission of promoting Russian culture and bringing together those who appreciate it.