Personal archive
When the young Vladimir Bashkirov joined a student mountaineering club little did he suspect that he'd go on to be one of the few climbers to conquer all of the Soviet Union's tallest peaks. He even climbed Mount Everest twice.

Mountaineering was incredibly popular in the Soviet Union. As the cult Vladimir Vysotsky crooned in one of his songs: “There is one thing that's better than mountains, and it's mountains that we haven't yet climbed.”

In the 1960s, after Yuri Gagarin’s flight into space, the USSR experienced a period of intense dreaming. And if space exploration was not open to everyone, climbing mountain tops was more accessible. Furthermore, mountains are a perfect place for dreamers.

Vladimir Bashkirov was a student at the Moscow Institute of Physics and Technology, which had one of amateur mountaineering clubs in the country. Its members spent every summer in the mountains. In 1970, Bashkirov had just returned from a trip to and was preparing to climb , another mountain peak in the Caucasus 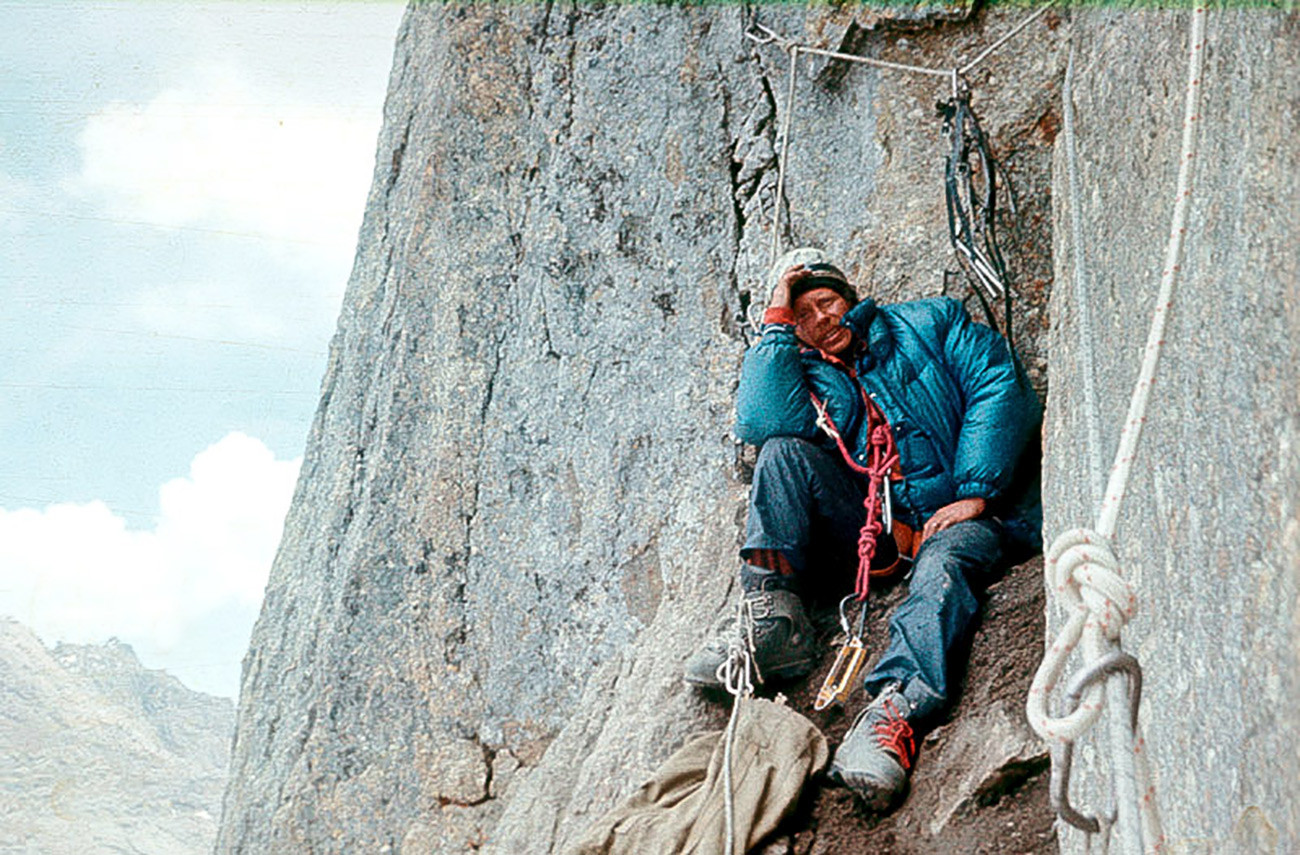 On a mountain wall

recall how Bashkirov showed his mettle for the first time. That day, everyone had gone up to the mountain, and only two people remained on duty in the camp. Suddenly, a member of one of the teams came running back, crying that a female instructor had fallen and slashed her stomach on an ice pick. There was no one to go rescue her because the two people on duty could not leave the camp. Then, by luck, Bashkirov showed up and volunteered to assist.

“I do not have a high athletic rank but I am a very good climber,” he said. “You can send me anywhere, I will cope with any task.” And that's how the girl was saved.

Love in the mountains

His future wife, Natalya, was also doing mountaineering before they met, but not at such a serious level. In the summer of 1983, her friends at the Institute of Physics and Technology invited her to be their cook on a mountain expedition. She agreed, not sure why. “Perhaps, it was Fate,” Natalya said in an interview. And that was where they met 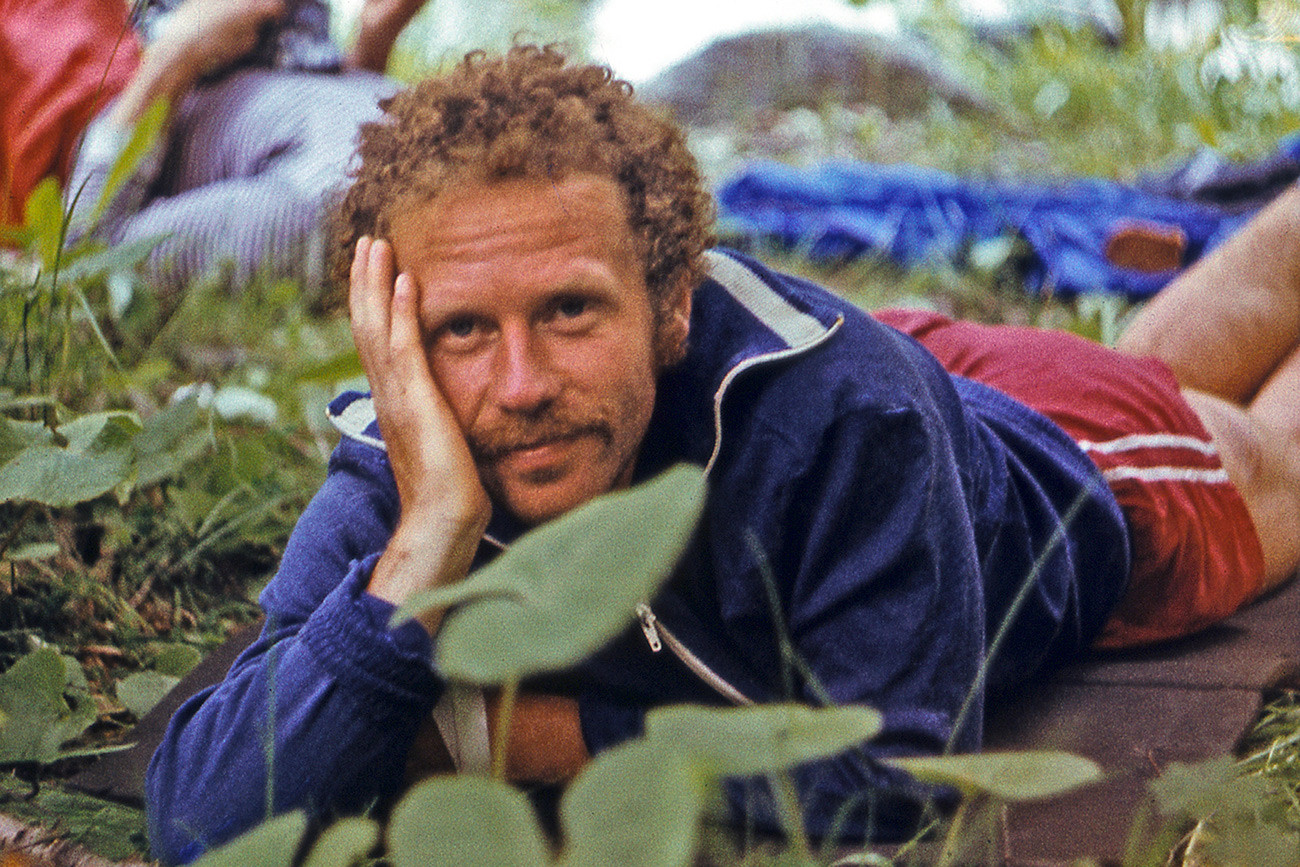 following year, Natalya naturally wanted to go to the mountains with Vladimir, but there were no vacancies on the team, even for a cook. The competition for every place was too high, so, in the spring, before the start of the season, Natalya had to do some serious training. She went to the and trained so well that she even won competitions, thus earning a place on the team. “The mountains draw you in. You go there once, and you can't live without them,” says Natalya 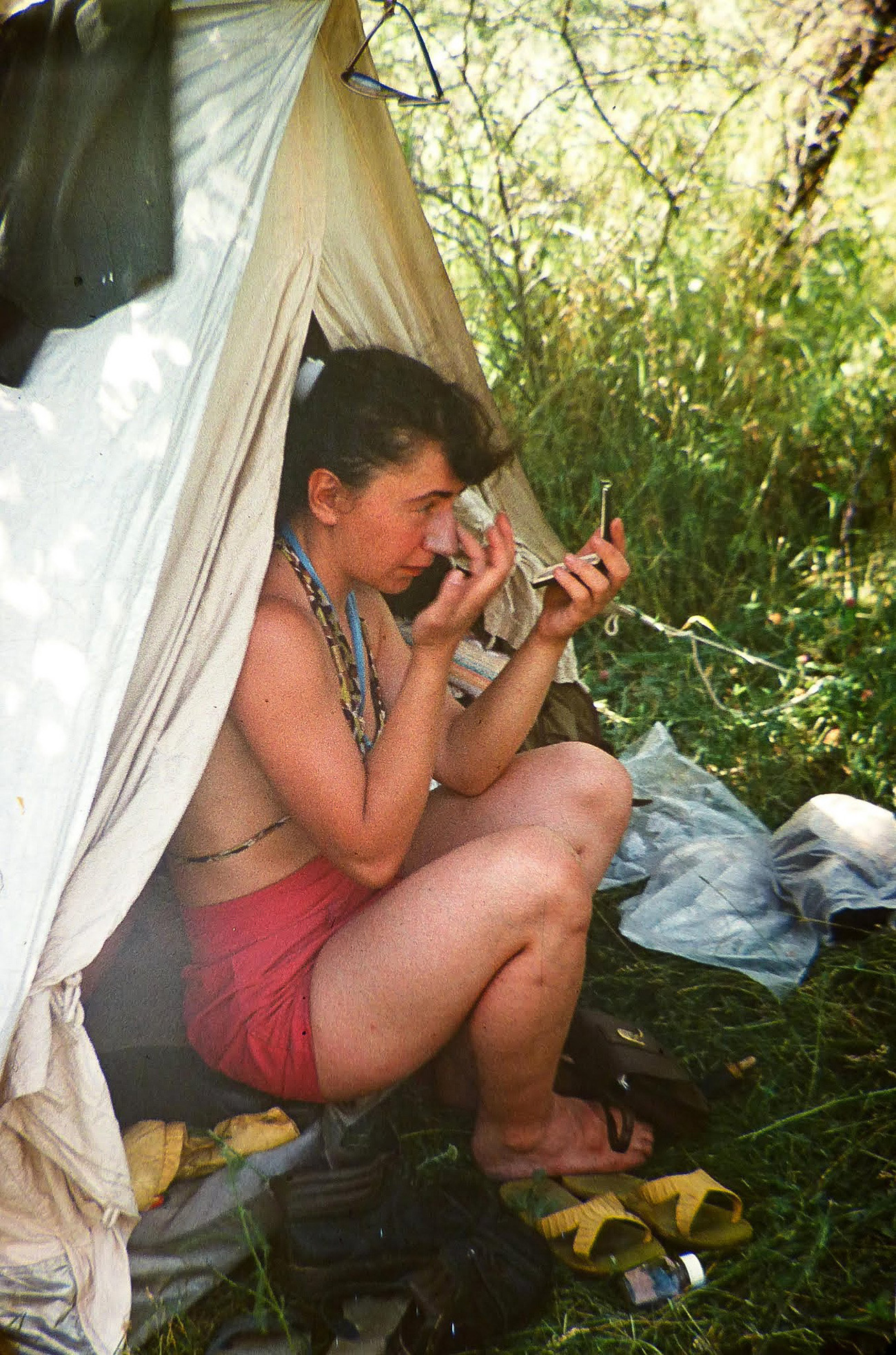 , this irresistible pull that some people feel for the mountains can land them in serious trouble. One day in the late 1970s, during an expedition to the Trapezium peak in the Caucasus, a fireball struck the tent where Bashkirov was sleeping. One member of the team was killed, and all the others were taken to Moscow with severe burns. For about a year, Bashkirov remained in the hospital: infections persisted, his liver was giving him trouble and he had to have several skin grafts. Doctors said he would remain a sick man for the rest of his life, and there was certainly no way he could go back to the mountains. However, as soon as Bashkirov was released from , he immediately went to the Pamir Mountains.

Bashkirov was awarded the title Snow Leopard, given to those who had climbed all the highest peaks in the Soviet Union. From 1961 to the present day, only about 665 climbers have accomplished this feat.

Bashkirov climbed the summits, taking routes that no one had done before him. “He was attracted to the unknown,” says Natalya. She compares her husband to the legendary explorer Magellan, who was the first ship captain to circumnavigate the earth 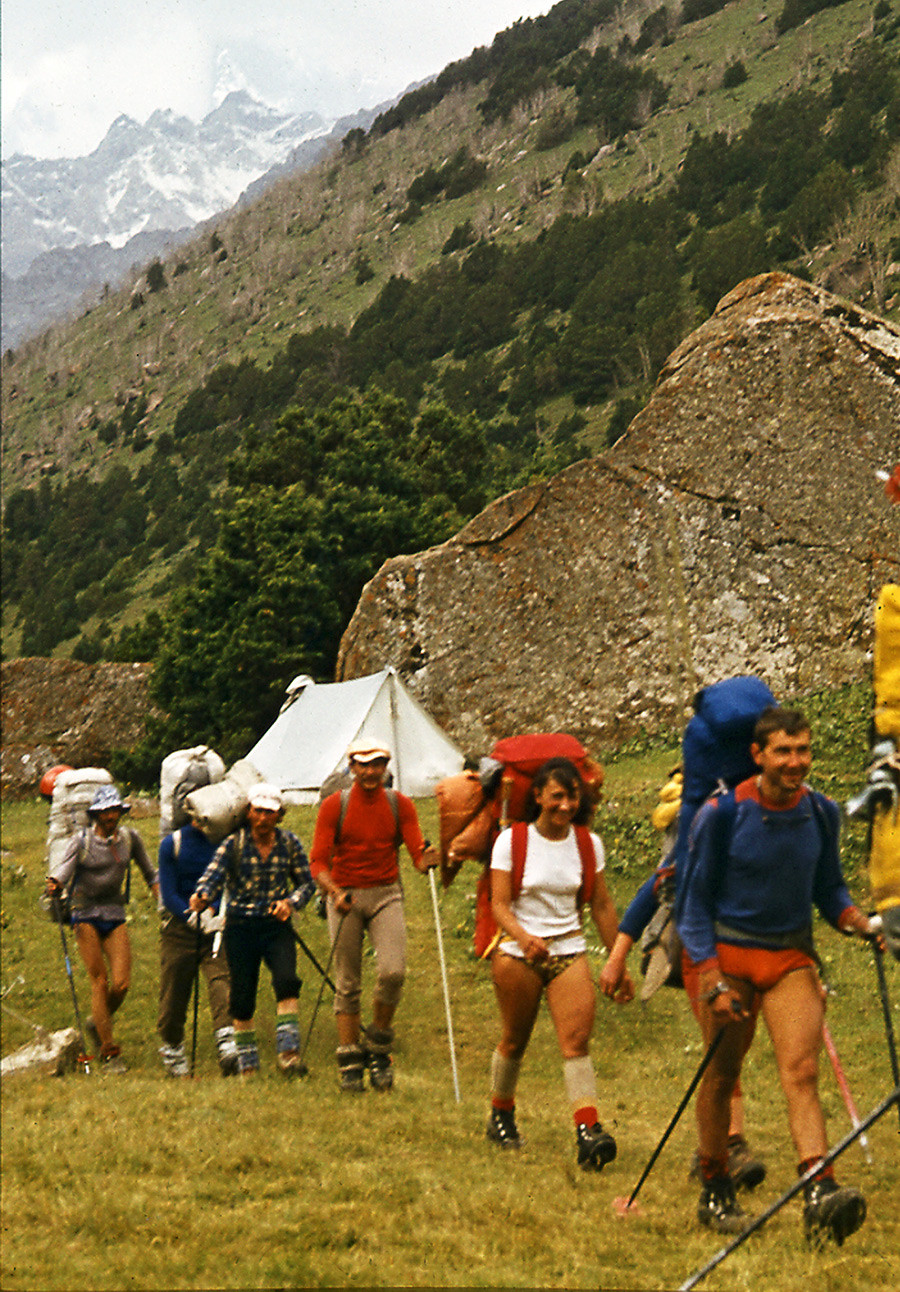 is all about self-confidence and readiness to tackle difficult tasks and not be afraid to take responsibility for the lives of other people. Bashkirov had all those qualities in abundance. On top of that, he had another secret ingredient: he captivated people with his charm and inner calm. Natalya recalls that if her husband said “it would be better to do things a certain way,” then no one had any doubt that he was right.

“People who went climbing with him were fueled by his drive and his energy,” she adds.

Only once did Natalya and Vladimir climb a mountain together – it was the 4,000-meter high Ushba peak in the Caucasus. “When I saw that mountain my knees began to shake. It looked like a vertical, shining ice wall,” Natalya recalls. It was a long and difficult route, and on the way down, their small group was caught in heavy snowfall, lost their tracks and had to search for their way back in the dark literally by touch 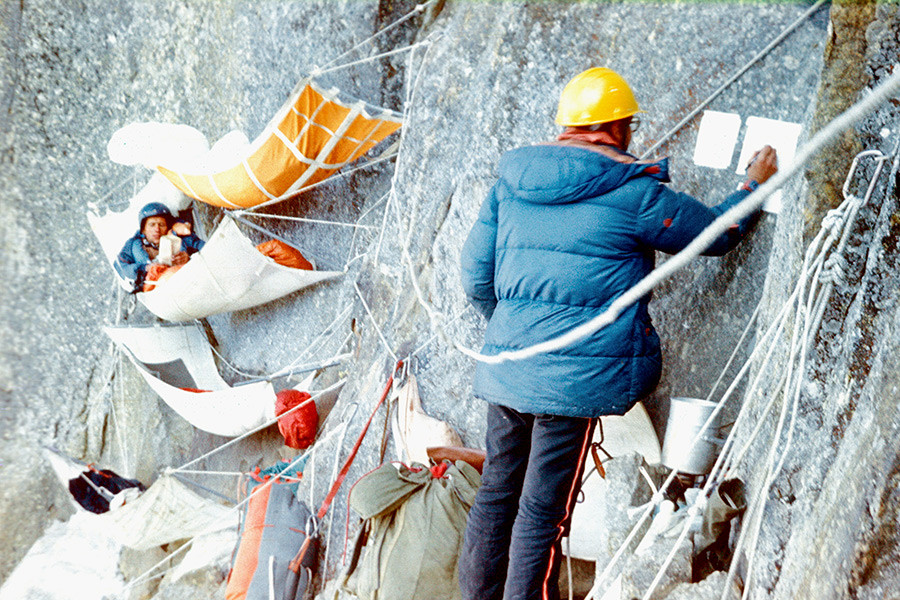 Some peaks required spending nights in sleeping bags just like that

that time, Natalya and Vladimir already knew each other very well, they had lived together for eight years and had children together, but she was surprised at how perfectly he held himself. “He looked like a captain of a ship that was caught in a storm and was going to sink, but he did everything that needed to be done and he was not at all nervous,” she recalls.

Perestroika and the 1990s brought economic and being a mountaineer and spending whole summers in the mountains became an impossible luxury. It was a difficult time for Bashkirov. On the plus side, travel abroad became possible, and he was finally able to fulfill his dream and go to the Himalayas.

His first trip was in 1991 to the Annapurna peak (8,091 meters), and in 1993, Vladimir decided to climb Mount Everest. Climbing routes there were booked months in advance, and his group received permission to climb only the western, long and gentler slope. That route could take a very long time and cost a lot of money.

At this time, however, a member of a women's expedition died on Everest and her relatives got permission for Bashkirov to climb the mountain via a different route because he had agreed to bring her body down. In the end, the woman's body was brought down by local sherpas, but thanks to the permission he had been given Bashkirov finally climbed Mount Everest. On his way down, he ran out of oxygen and was nearly exhausted but miraculously he managed to reach the bottom 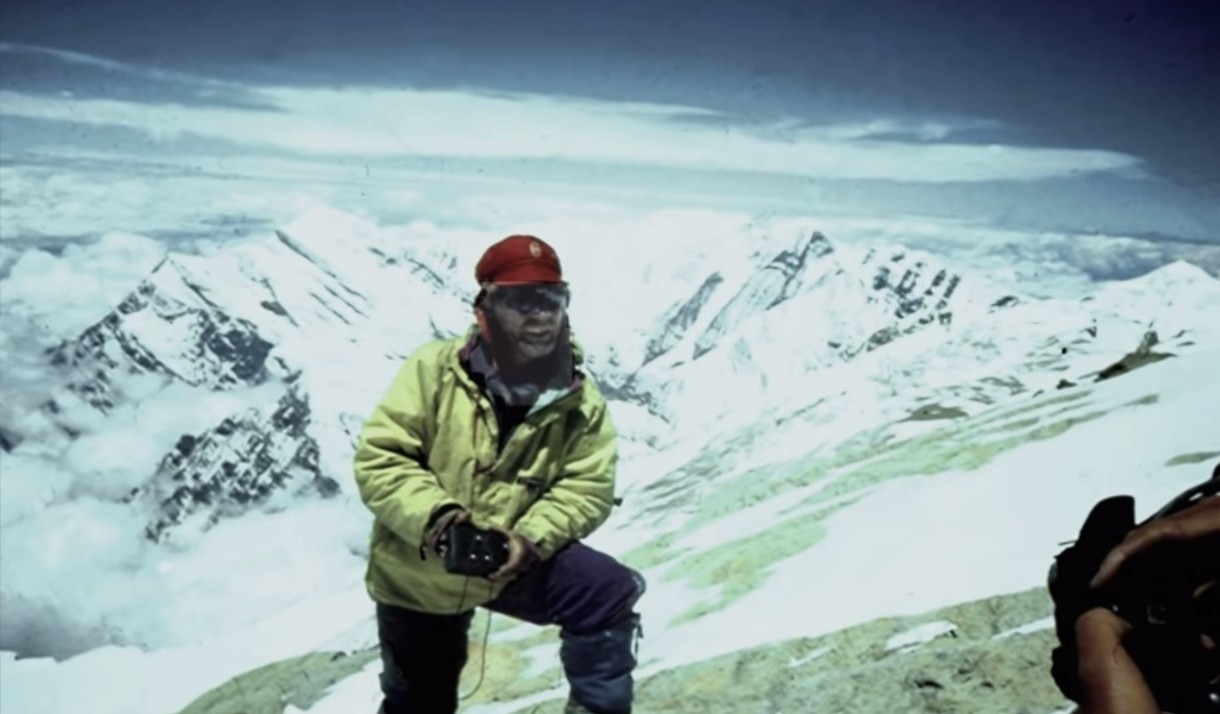 Bashkirov in the Himalayas

1994, Bashkirov became the first Russian mountaineer to climb the Himalayan peak Ama Dablam (6,814m), opening a new route in the process. In 1995, he began working in the Himalayas as a guide. In a single year, from May 1996 to May 1997, with different Bashkirov climbed five 8,000-meter peaks in the Himalayas. Needless to say, all that put an enormous strain on his body, and it is not known for certain whether anyone else has ever repeated Bashkirov’s astounding feat.

After he climbed Everest for the second time, Vladimir’s clients, Indonesians, who had never even seen snow before then, invited him to Kathmandu to celebrate their achievement. He spent two weeks with them and completely lost his altitude acclimatization. Upon his return, he went up to the base camp in a matter of three days, although that trip took five to seven days. And on the following day, without waiting for acclimatization, he set off to climb his remaining unconquered 8,000-meter peak, Lhotse.

Members of his team later told Natalya that Vladimir was not feeling well when they set off, and when they reached the top, things became really bad. The rescuer who arrived on the scene gave him a faulty oxygen cylinder. When descending, Vladimir's heart stopped. That was in May 1997.

Despite having lost her husband and several close friends in the Himalayas, Natalya continues to go to the mountains. An experienced guide, she leads trekking groups every and has already traveled all over Nepal.